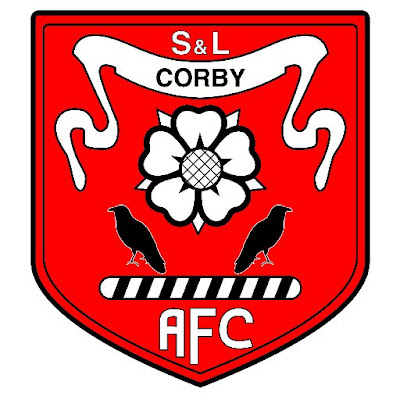 The club were former in 1935, at the time as a works team of the local steel firm who were Corby's principal employer and responsible for the mass Scottish immigration in the 1930s as people came south for work. They started out in local leagues such as the Kettering Amateur League, but the formation of Corby Town FC in 1948 saw a mass exodus, with most of the players and management defecting to the new club. They joined the United Counties League in 1957 and although they started well, the expansion of the league to multiple divisions saw fortunes decline and in 1966 they were relegated to the second tier. They took a while to recover, but in 1975 they were champions for the second season in a row, winning promotion to the Premier Division. They'd say there up until 2014, experiencing the highs of a runners-up spot in 1986, and then becoming champions in 2009. On the flip side the club experienced financial hardship in the late 80's and was known as Hamlet S&L for a few seasons after being rescued by a local businessman. Their first season back in Division 1, 2014/15 was a complete disaster with just a single point gained all season and 161 goals conceded. Last season saw a huge improvement and a third-placed finish but it's back to struggling this season. They sit bottom, but are at least in touch with the rest of the league, and with games in hand too.

In the FA Cup, S&L Corby's best ever run came in 2009 and 2011 when runs were ended by credible defeats to higher league opponents in Ilkeston Town and Mickleover Sports respectively. In 2008/09 the club reached the 4th Round of the FA Vase, beating Enfield, Oxhey Jets, Heanor Town & Daventry Town before a 2-1 defeat at Glossop North End. The club also have a reserve side, Corby S&L Khalsa, who play in the Northamptonshire Combination Premier Division. 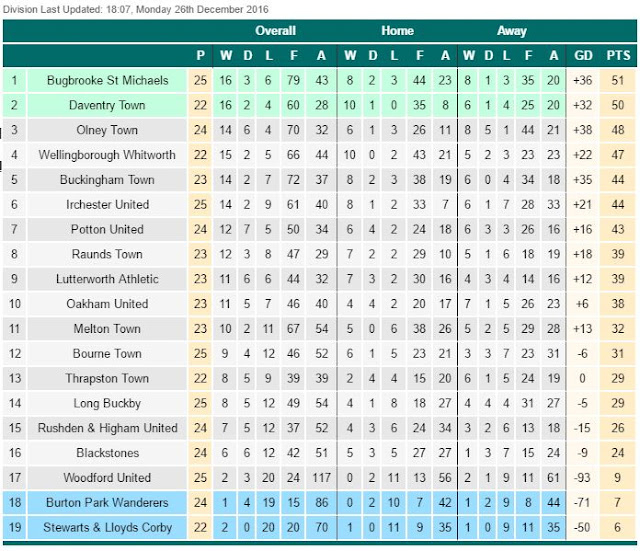 After our game at Rothwell Corinthians had finished, we made our way back to the car for the 12 mile trip to Corby. I'd been hoping to sample some Scottish treats, preferably a deep fried haggis supper, but if not a scotch pie. So I programmed a chip shop that was listed as open on Google, but when we got there it was all shut up due to the Christmas break. We carried on to the ground, hoping to spot somewhere en-route. KFC might not have been my first choice, but they do a decent burrito, so we had lunch there. We sat in the warm as we still had plenty of time until kick off. From there it was a 2-mile walk to the ground, with us arriving at the ground at 2.40. 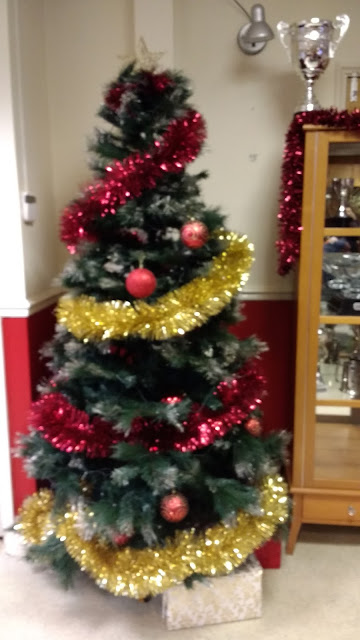 We went straight to the gate, paying a bargain £3 to get in. At most grounds I go to, I feel they are forced to charge too much for what you get - either to garner enough money to keep the club running, or more disappointingly, caving into players demands to avoid falling behind on the pitch. This was an exception to the rule though, charging a quid or two less than what my ideal price would be. Their logic was they didn't want to annoy the small band of supporters that they had, and certainly the friendly attitude we got at the entrance would do no harm. The only disappointment was that there were no programmes, though as I have said on here before, it's no big issue as I am running out of space. We were given a couple of old copies for free later on anyway, and though mine will be read and passed on, the sentiment was much appreciated. 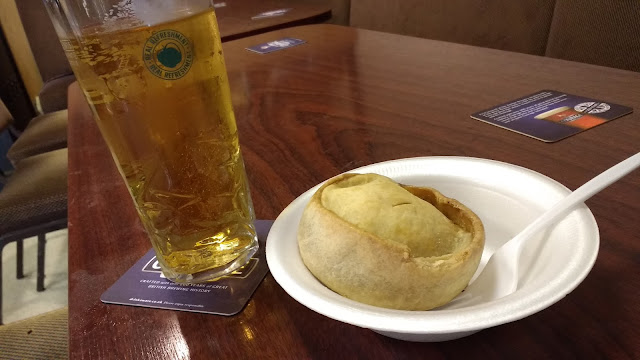 We made our way to the bar where the friendly atmosphere continued. I finally got my Scottish fix in the form of a Scotch Pie, which was nice as there is nowhere in England to get them since Morrisons stopped stocking them. For those not in the know, the reason for all things Scottish being in abundance in Corby was the fact that in the 1930s, thousands of Scottish steelworkers emigrated to the town in search of work, the bulk of which were employed by Stewarts & Lloyds, now owned by Indian firm Tata Steel after being nationalised in 1967. The friendly welcome continued here and the guy we were chatting to was the cousin of former Newcastle, West Brom and Watford player George Reilly. He scored the winner in Watford's 1984 FA Cup Semi-Final against Plymouth, ironically the side my own team Wycombe were facing today. Looking on Wikipedia later, I found out that he had part of his ear bitten off on a building site in 2003, with his attacker claiming to be an Argyle fan. The friendly committee member even invited us into the committee room  at half time where we had complimentary biscuits, tea and pork pies. I've had plenty of nice welcomes at clubs, but this really went above and beyond.

It was a shame then that we couldn't bring them a win. We were seeing Lutterworth Athletic for the second time in a few days, having been witness to them winning convincingly at home to Bugbrooke St Michaels last Friday. Though they dominated from start to finish on this occasion, they'd get nowhere close to scoring the five that they did at home, as they were met by a resolute backline who defended like trojans. When the visitors did manage to get a shot in on goal they were foiled by the impressive form of home keeper Dominic Roggero who made several great stops, diving at the feet of visiting attackers on several occasions. Eventually though the pressure would tell, but they held out until the 50th minute when Lutterworth took the lead from close range. They added a second late on, which was well deserved given the state of play, but teams with lesser spirit than the hosts could have been in for a real hiding. 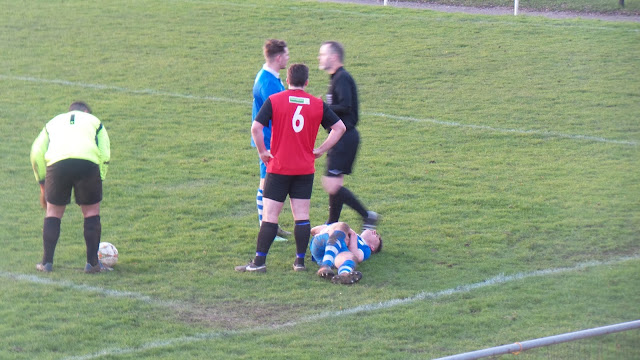 During the game Chris and I had been talking to the club official about groundhopping, and telling him about the organised groundhops that our mutual friends Chris & Laurence organise. The guy was very keen for his club to host one, though sadly it won't be in the next couple of years as all the teams are pretty much confirmed. It's a shame, as on today experience, they'd make superb hosts. We said our goodbyes and made our way back to the car. Thankfully Corby was close enough to BBC Three Counties transmitters to listen to the coverage of the end of the Wycombe game which had been delayed due to bad organisation at Plymouth's ticket office and a player injury. So I was delighted when at 5.15 it was announced that Wycombe had equalised down in Devon, to make it 3-3 with Wycombe having been 3-1 down and seemingly out. A nice little bonus was hearing that the Franchise club from Milton Keynes had yet again lost, and fingers crossed would be swapping leagues with Wycombe at the end of the season. I dropped Chris at home at 6, getting home myself at 6.45. I spend the evening watching Corrie and Match Of The Day, chatting online and doing some work on my blog. With 3 games tomorrow, I was glad to at least complete my Rothwell Corinthians entry, as I'll be well behind soon. 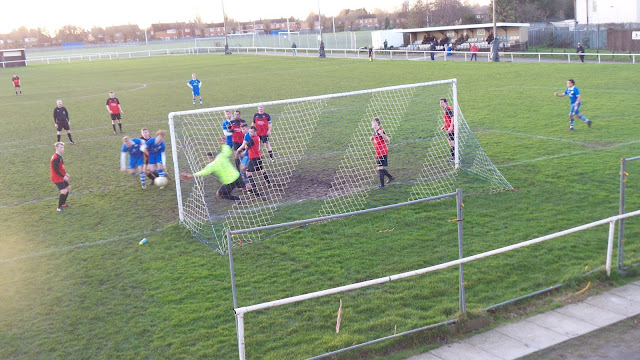 OCCUPATION ROAD is a three-sided venue owing to sharing facilities with the works rugby club. There are two covered areas - a seated stand holding around 100 and a covered standing area for around the same amount. The rest of the ground was open. The bar at the ground is well priced and offers Strongbow & Magners for cider drinkers as well as a range of other drinks. For food there are hot pies, with the highlight being the Scotch Pies which were great value and very tasty.

Entry was a bargain £3 and the welcome was super-friendly, so although there was not much around the ground, I'd recommend a visit. The ground is an interesting one to look at, and you can stand on the bar balcony for a great view of the action. You'll also get a really friendly welcome from the club and at £3 entry it's one of the cheapest days out at step 6 in the country. 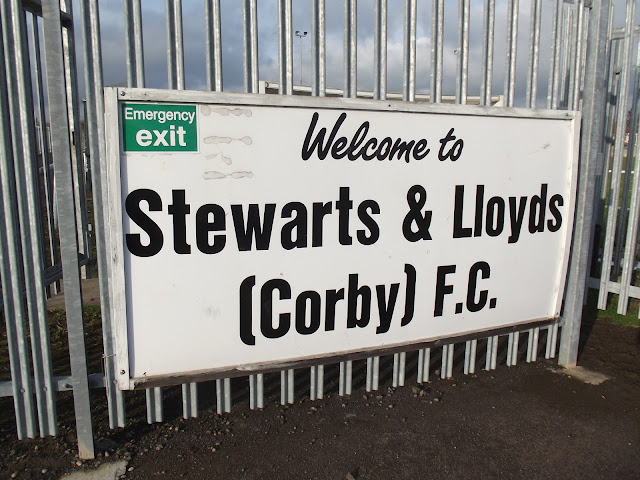 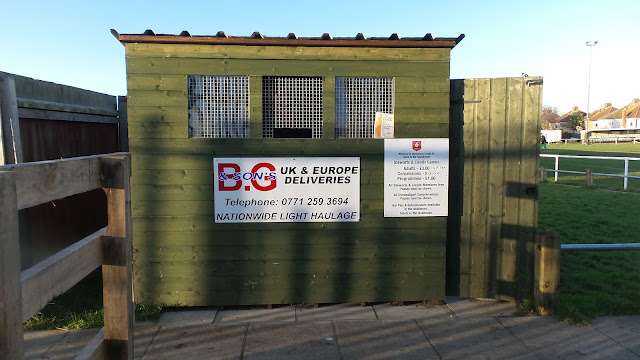 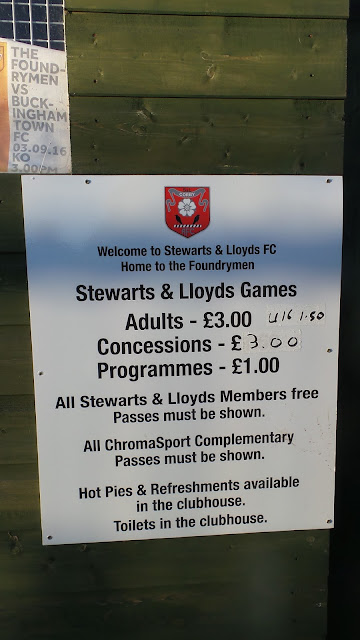 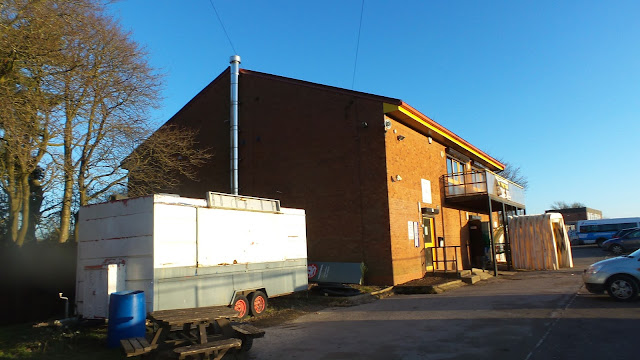 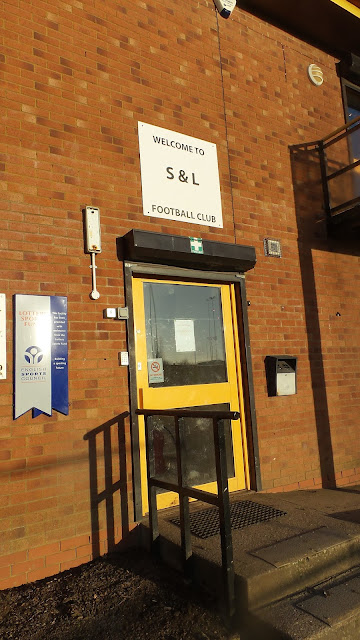 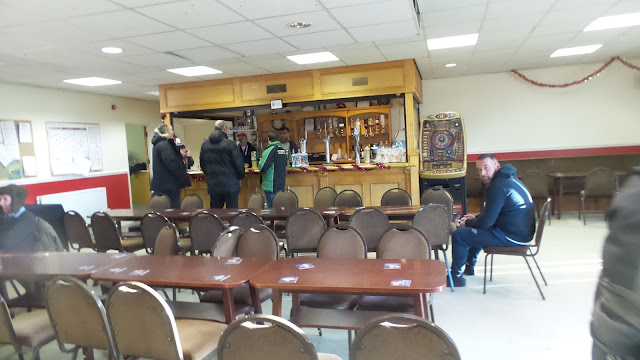 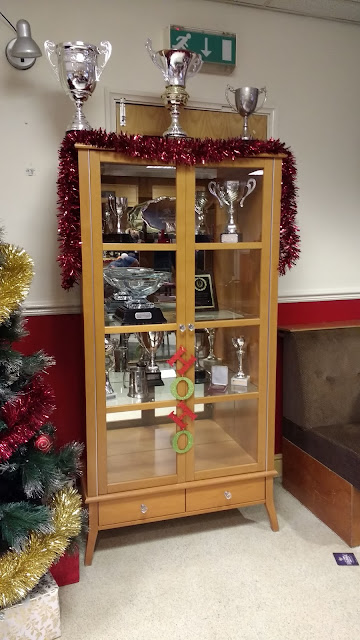 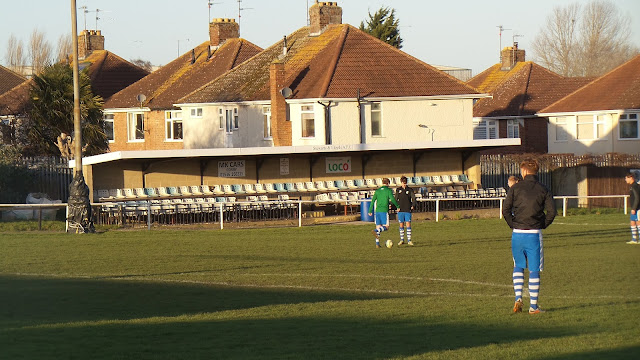 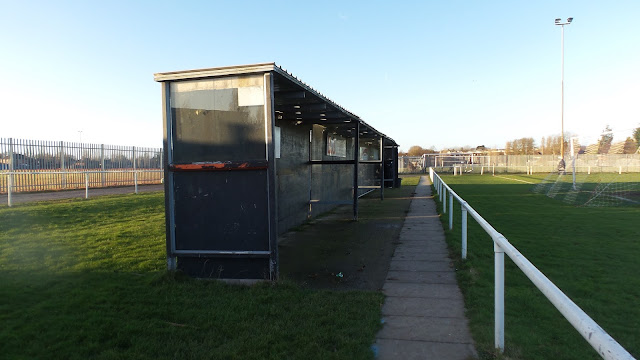 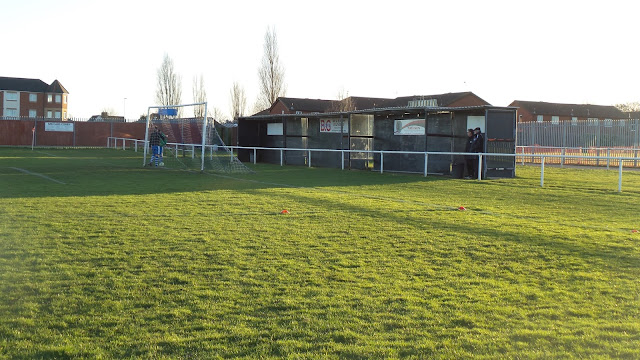 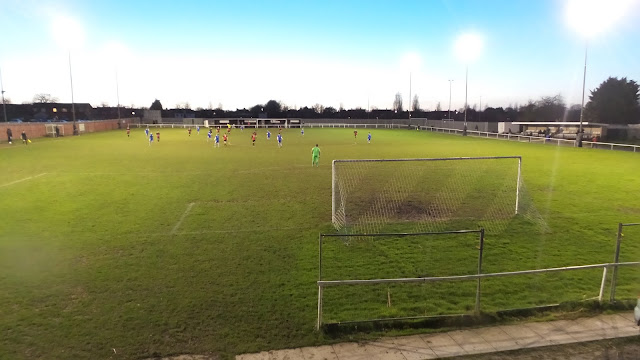 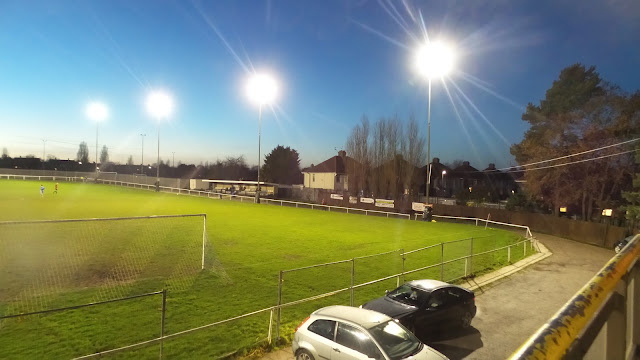 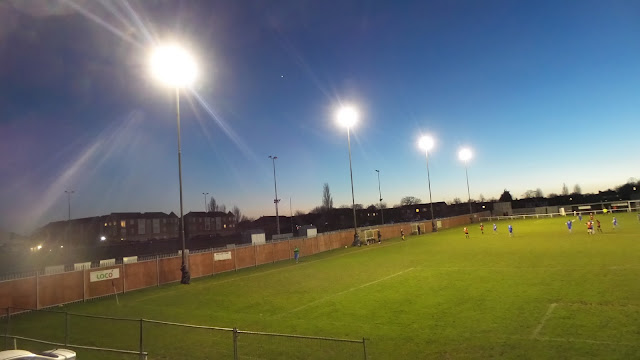