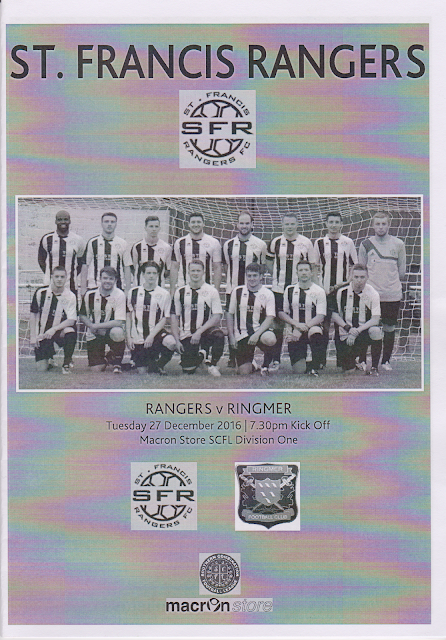 The club were formed in 2002 following a merger between St Francis and Anstey Rangers. Starting in the Sussex County Division 3, they won promotion in their second season as runners-up to Crowborough Athletic. They adapted to the higher level well, and after three top 4 finishes, they were promoted to Division 1 at the end of the 2006/07 season as runners-up again, this time to Pagham. They remained in Division 1 until the end of last season, which by now had been renamed to the Southern Combination Premier Division to reflect the league's larger geographical footprint. The club generally found things tough, with their best finish at step 5 coming in 2014 when they finished 10th. Last season was especially tough  - a rock bottom finish, just one win all season and 214 goals conceded in 38 league games. This season has been slightly better - second bottom at the time of play, although lack of applicants from lower down may mean that they could still survive.

St Francis Rangers have seen little success in the FA Cup with their sole victory in nine attempts coming in 2014/15 at Erith Town where they won 2-1. They went on to lose to Greenwich Borough in the Preliminary Round. Their debut season in 2008/09 saw their best-ever run in the FA Vase when they reached the second round before losing to Molesey. 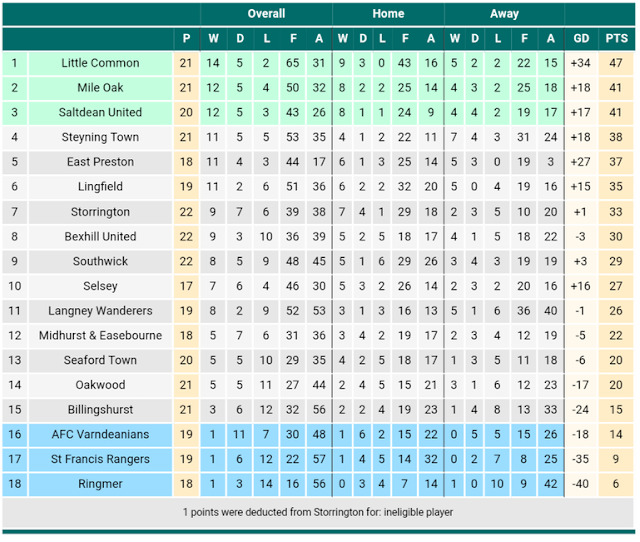 After my game at Three Bridges I made my way over to Haywards Heath where St Francis Rangers were based. Getting to the town was easy enough, but finding a route to get to the ground was a bit of a nightmare. Finally, I found it and was pleased to see the club sign,  but not without several unsuccessful attempts where Google Maps believed that there was a through road where there wasn't one. Looking at the directions on the club website helped - I just aimed for a certain road and followed the directions from there, I still had over an hour to kill and so I drove back into town to find something for dinner. My problems continued when I didn't notice a low post coming out of an entrance and I scraped the wing of my car, marking the paint which was very irritating. I'd lost my appetite after that, and so after parking up I went for a walk., during which time I bought the non-league paper, Around 6.50 I drove back to the ground. 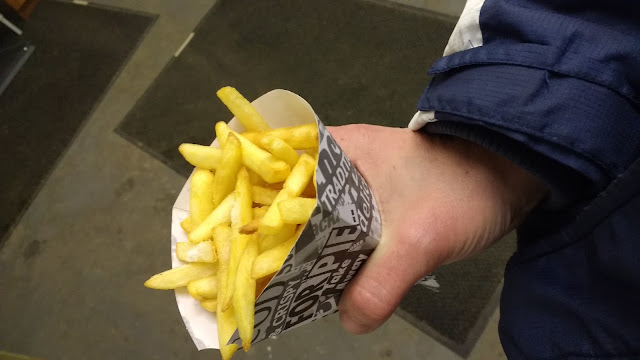 I got back at 7, paying £5 to get in, plus £1 for a well-produced but fairly thin programme. Originally I was going to park at the ground and walk to a pub, but with it being freezing on didn't want to risk it if I was going to have to drive early. Thankfully the game looked as if it was going to be on, and so with my hunger returning I got a portion of chips from the tea bar. These were a decent sized portion for £1 and were pretty nice. I made my way out and stood along the side for the game which kicked off 15 minutes later than advertised. This was due to a local resident complaining if the lights went on a minute before 7 pm, though last time I checked Haywards Heath had indeed had the invention that is the curtain for some years now. 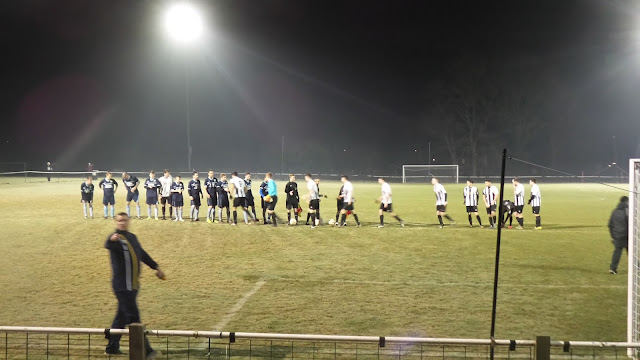 The game flowed from end to end,  but it was hosts St Francis Rangers that took the lead on 16 minutes. An excellent through ball was latched onto by Rhys White who finished with aplomb. Ten minutes later it was all square, a free kick was whipped into the back post and Ben Palmer was there to slide home. They took the lead just before the half-hour mark with another Palmer goal, though I didn't get a great view of it as I was up the other end of the pitch at the time. In what was a similar goal to the first, another decent ball was played through, and a Rhys White used his pace to get clear of the Ringmer defence and level things up, nine minutes before half-time. Both sides had half chances at the start of the second half, the best of which on 55 minutes saw Ringmer thunder a free kick against the bar. The hosts had a free kick of their own, following a cynical trip on the edge of the area but it came to nothing. The visitors went ahead with 21 minutes remaining when Stephen Jackson tapped home from close range. Despite some good saves and glaring misses from either side, Ringmer clung on for a rare 3 points. It was a good journey home, with me in just after 11. I watched a bit of TV before going to bed around midnight, not really looking forward to my 5 am start at work in the morning. 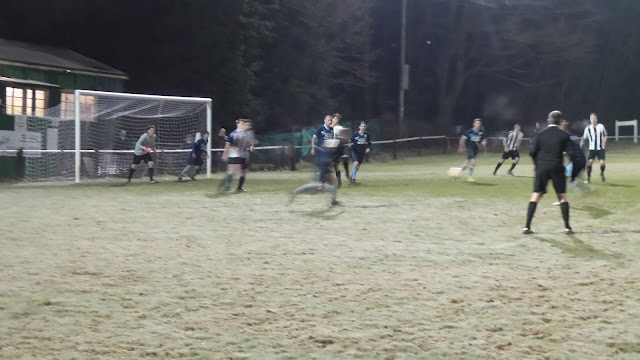 THE COLWELL GROUND is situated within the grounds of the Princess Alexandra hospital and is a pain to get to if you are trying to use a Sat-Nav. Your best bet is to navigate to a road listed on the official website and follow the directions from there. The location is set half in woodland down the bottom of a narrow hill and has quite an eerie feeling on a dark winters evening. The tea bar facilities at the ground are decent - hot and cold drinks including cans of beer and cider as well as burgers and chips. The latter are great value and well cooked at £1 a portion.

The ground itself is pretty good - a 100 seated stand and then covered accommodation for people wishing to stand for around the same amount. The ground is unlikely to be good enough for any higher than step 5 due to is access and location, though it's well worth visiting. In the day time you have the imposing backdrop of a former mental hospital which has since been converted into flats. 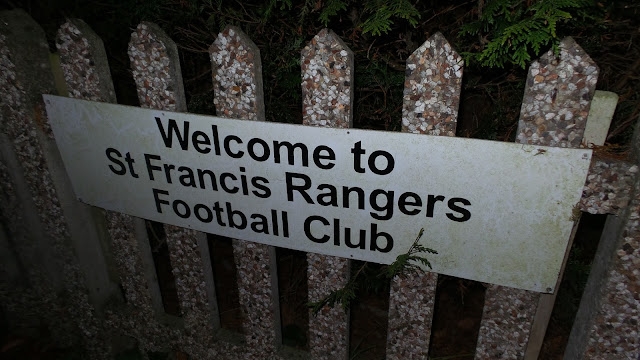 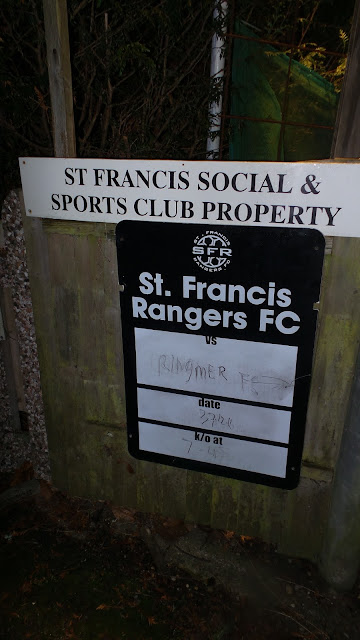 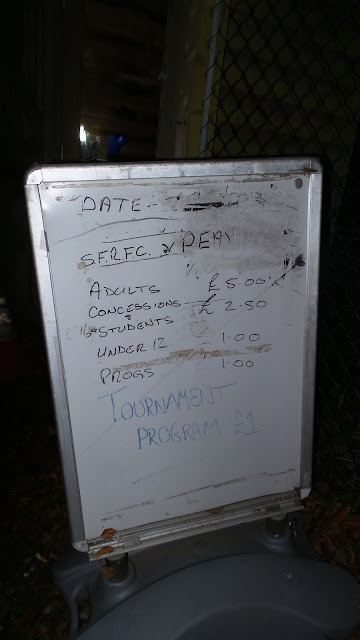 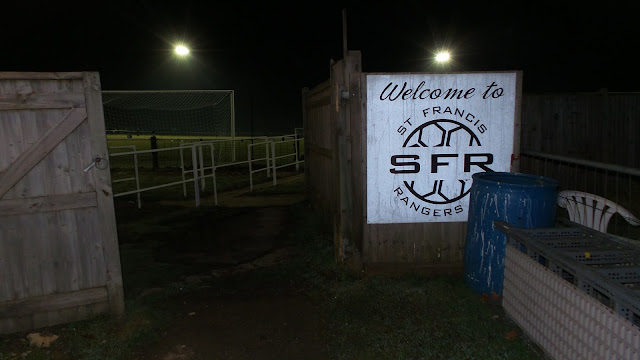 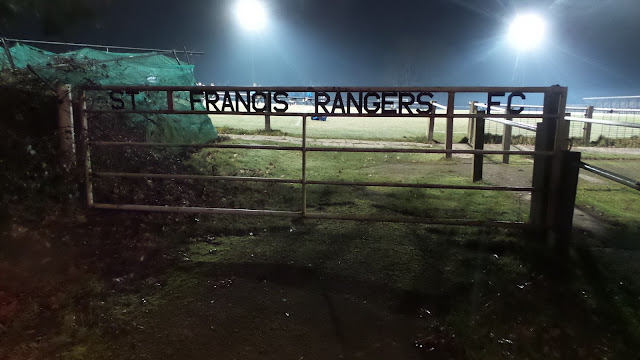 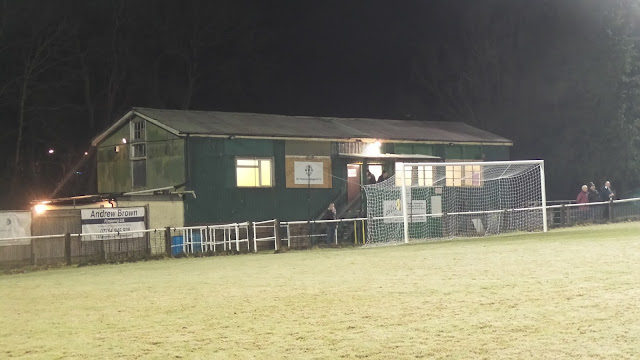 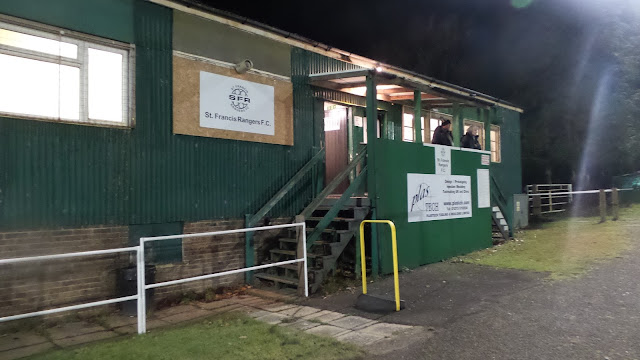 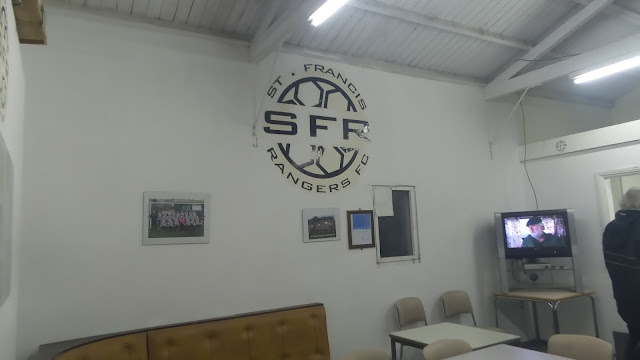 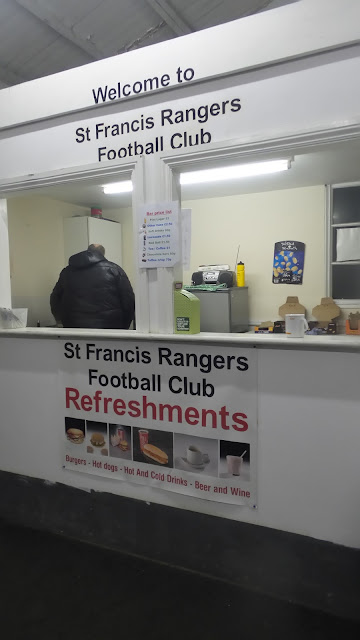 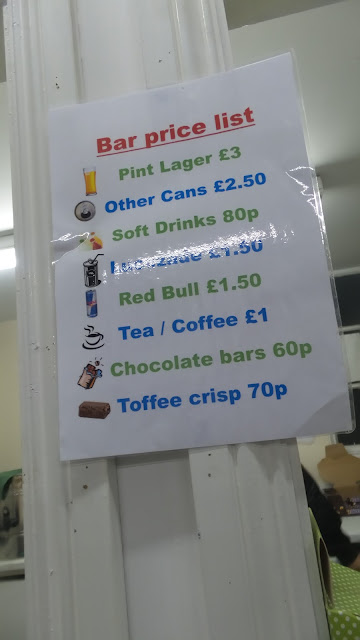 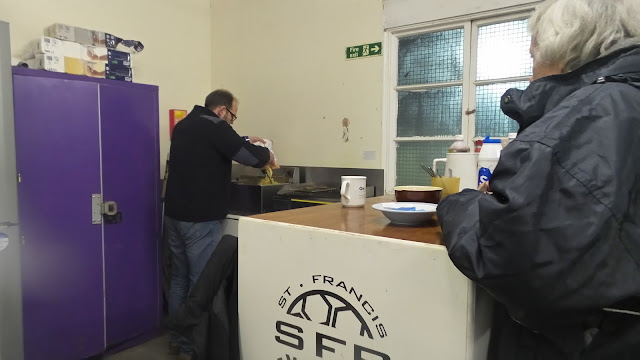 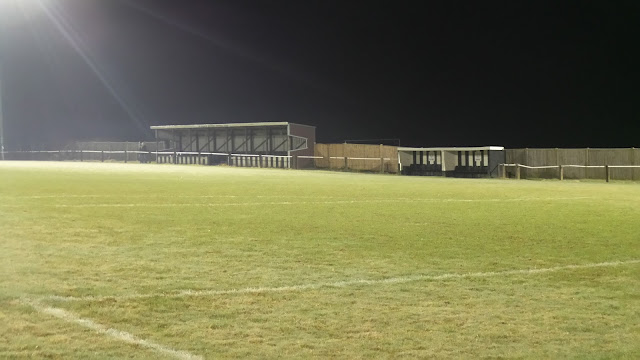 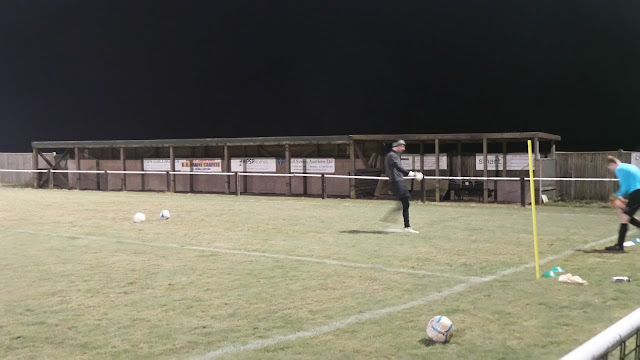 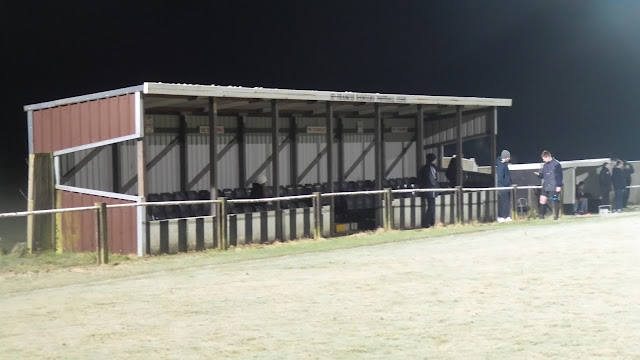 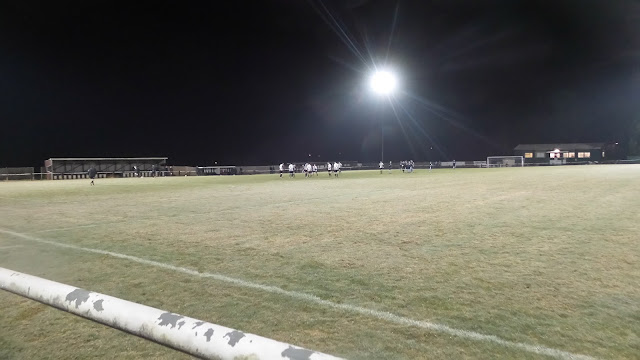 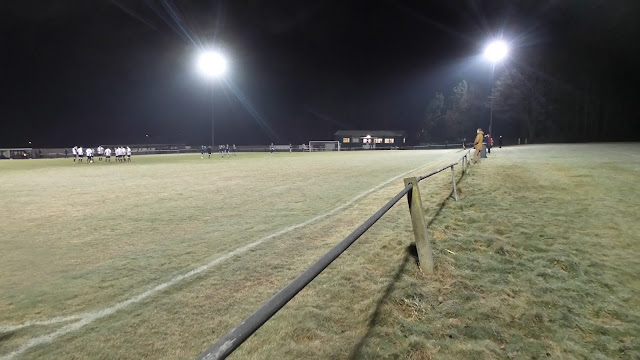 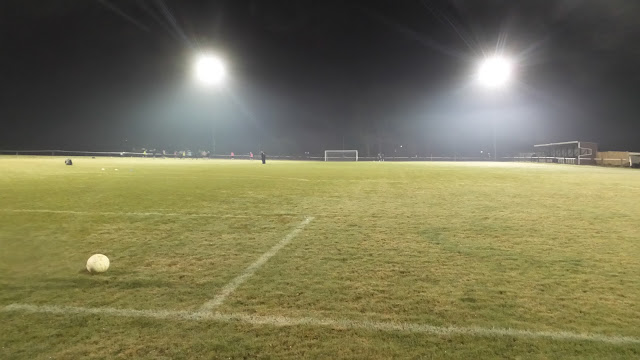 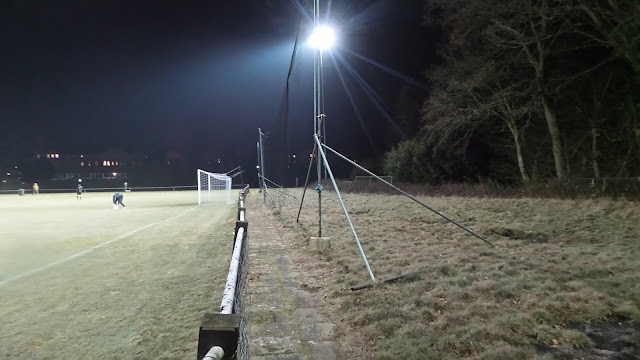 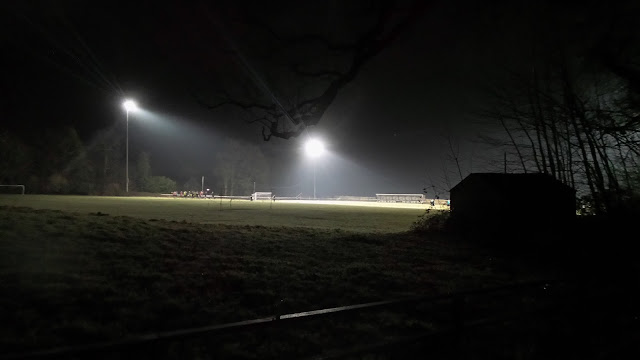