1: The club were founded in 1895 as Thames Ironworks, reforming in 1900 as West Ham United. One of their nicknames 'The Irons' reflects this history.
2:  The club has many honours, although one that some fans do lay claim to is that they won the 1966 World Cup. In reality, England beat West Germany 4-2 but the goals were scored by West Ham players Geoff Hurst and Martin Peters, whilst Bobby Moore, also of West Ham was the winning captain.

3:  The highest ever league placing came in 1985/86 when the club finished 3rd. The worst in modern times came four years later under unpopular manager Lou Macari as they finished a still respectable 7th in the second tier.

5:  West Ham United won the European Cup in 1965. They beat Ghent, Sparta Prague, Lausanne and Real Zaragoza before defeating 1860 Munich 2-0 in the final at Wembley Stadium.

6:  The club's highest attendance at home came in October 1970 as they played Spurs in front of a crowd of 42,322. The lowest came in 1955 when just 4,373 turned up for the Second Division game with Doncaster Rovers as on this Thursday, Britain was in the grip of arctic conditions.

7:  This record is more than likely to be broken in the near future, following their recent move to the Olympic Stadium. Previously they played at the Boleyn Ground from 1904 until 2016 and before that, Memorial Fields.

8:  The club are famous for their renditions of 'I'm Forever Blowing Bubbles' The origins of this came from a 1920's advert for Pears Soap and was adapted by a local headmaster to fit West Ham.

9:  Celebrity fans include Ray Winstone, Russell Brand and Danny Dyer. Alf Garnett was a West Ham fan in fiction, however, actor Warren MItchell who played him is a fan of bitter rivals Spurs.

10: On Christmas Day 1899, Thames Ironworks captain Harry Bradshaw died in a game against Millwall, following an accidental kick to the head.  The popular player was rated as being one of the best wing forwards around at the time. 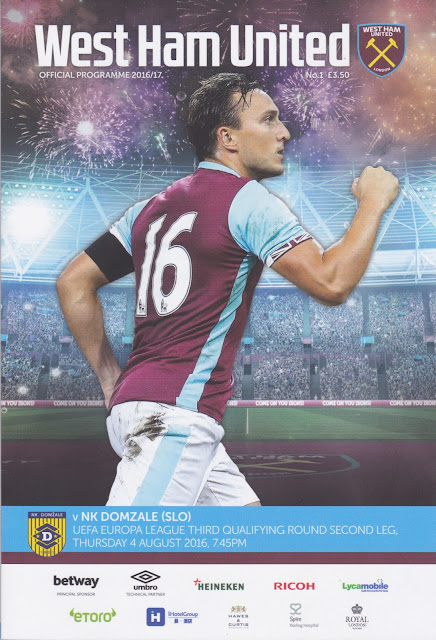 When West Ham left their historic Boleyn Ground after many years residence in May, I knew that I'd have another ground I'd have to do if I wanted to complete the 92. I envisaged doing it for a game in the early rounds of the FA Cup, just as I had done for the Boleyn Ground when I saw them lose to Aldershot Town in a League Cup first round tie. But then my Braintree supporting mate Dan messaged me to tell me he had got tickets for West Ham v NK Domzale in the Europa League qualifier. They were £20 for the best seat in the house, and better still it would be the first ever West Ham game at the Olympic Stadium. As soon as I found out, I knew that I had to go and so went on the site and got one of the best seats in the house for £22. I learned later that I could have got a seat behind the goal for a tenner and might have gone for that option, but I was pretty happy with the deal I had got overall. As soon as I put the news up on Twitter I got quite a few responses and it seemed that a good amount of the groundhoppers that I know would be making their way over to Stratford on the following Thursday evening. 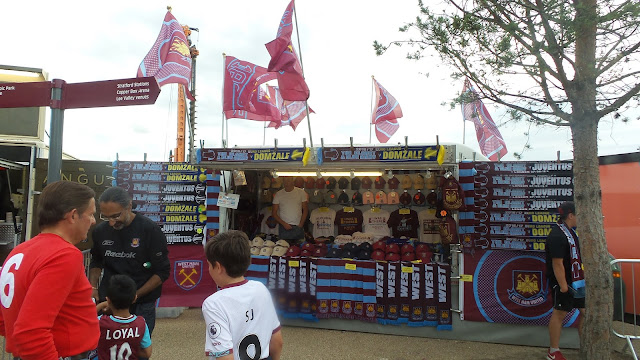 I'd been chatting to other hoppers and bloggers about my blog and one remarked that it was better when I used to write a few paragraphs about the club's history, rather than do the '10 Facts' that I have above. I agree on the ones with less to write about, but tonight there was so much to mention that I felt it would become unwieldy. That said, I had got into the habit of doing '10 Facts' for every blog and had struggled to come up with enough, so I am going to judge it on a case by case basis and not have any hard and fast rules. On the day of the game, it was a very easy day at work and I was out by 10.15, little over 5 hours after I had started. I spent a good chunk of time at home, getting on with various jobs that I had to do. I wanted to get to Stratford for around 5PM, so left home just before 3, parking at Amersham and letting the train take the strain, as I invariably do when going to games in London. 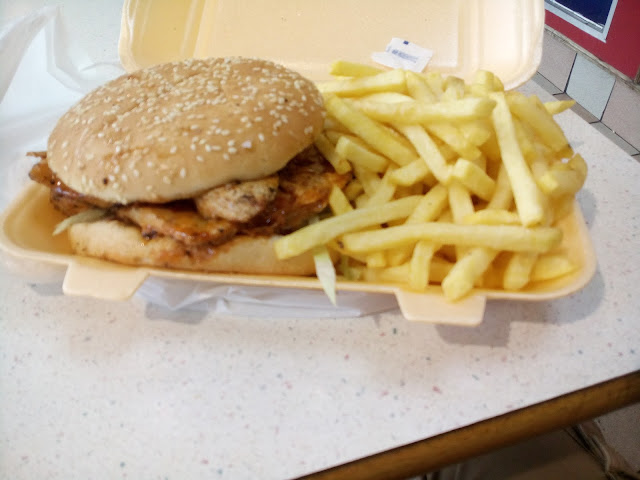 I arrived at the station at 3.25, having to wait 20 minutes for the train I needed. On the train I'd normally be listening to the Two Mikes podcast but owing to ongoing issues with my phone I had to make do with the David Jason audio book which at least was pretty decent. After a change to the Central Line at Liverpool Street I arrived in Stratford at 5.15. First call was the Golden Grove Wetherspoons. Match day restrictions were well in place and I had to make do with a pint of Magners in a plastic glass. At least it was only £2.09 though. I only stayed for a pint then went for a walk.  I got myself a tin of Redds Cranberry,  a Polish beer which was excellent for £1.10. Shopping around I then had a Monster Piri Piri burger meal for £4.49 which filled me up. From there it was on to the ground,  though I made the mistake of thinking I could avoid the queues outside and get a programme in the ground. This turned out not to be the case,  though I wasn't too fussed. I took my seat for the game which was a decent view,  but still had the running track to contend with. The phone signal was dreadful too,  something that seems to be par for the course with EE. I'd seen half and half scarves for a tenner on the way in,  but I didn't indulge,  knowing that I'd only paid £6 in Scotland a couple of weeks ago. It was nice to be able to chill and watch the game,  knowing it would be well covered,  the match report from the Daily Star is below. 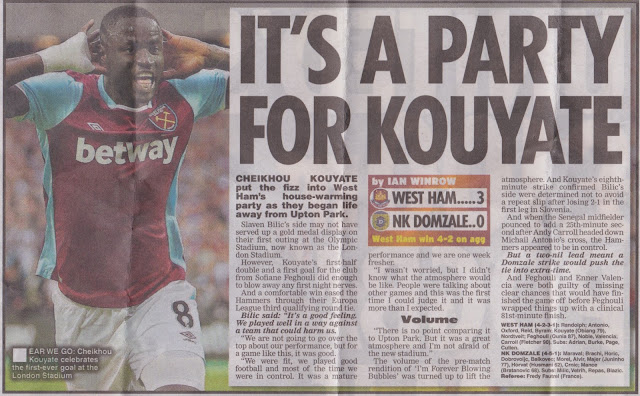 I'd had a walk around the ground at half time and was lucky to get one of the last programmes with people buying armfuls. I also checked out a few viewing points and the cheaper seats seemed better in terms of atmosphere,  my prime seat was a bit detached from the action,  all a bit corporate for me. The view was decent though. As it got darker the atmosphere improved,  with the floodlights making it feel a bit more homely. Getting out of the ground was slow and our block was one of the last out. We had around a half mile walk to the station,  surprisingly as we got near it was well managed. The crowd were split into two lanes and some guys with STOP and GO signs took it in turns to let each group go, with the obligatory good natured booing and cheering to lighten the mood when it was our turn to progress. I got on the Jubilee line train to Finchley Road,  which was absolutely boiling until it moved off.  It was quite good timing,  I had a 7 minute wait for my train to Amersham. I was glad to be back overground as I had mobile Internet back which kept me busy for most of the journey home. I was glad to be at such a historic night,  even though I'd be having a late night with me up for work at 4am. I got into Amersham at 11.45, arriving home 15 minutes later. I stayed up for a bit until I was tired,  getting a short night's sleep,  no doubt needing to catch up the following afternoon. 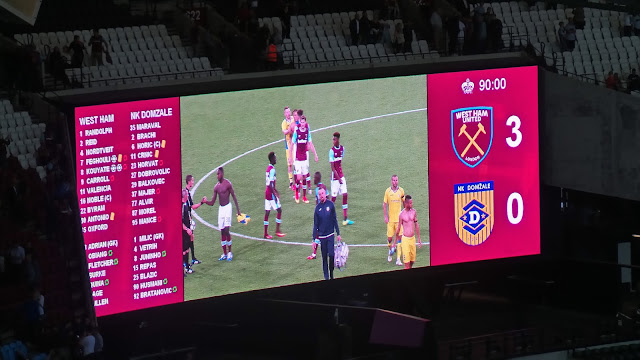 The OLYMPIC STADIUM or LONDON STADIUM was used in London's Olympics in 2012 and has been specially adapted for football. West Ham won the race against bitter rivals Tottenham to take up residency,  and they got a great deal,  all at the expense of the taxpayer,  thanks to government incompetence. The area is right near Westfields shopping centre and a wide range of takeaways and pubs catering for most tastes. That said, for a better drinking experience, you might want to stop off along the way, especially if you are eating or are into drinking something decent.


The ground itself is a mixed bag.  Leg room and sight lines are good,  though it's not as close as it might be,  thanks to the running track. Some of the higher seats seem pretty decent with you being so far from the action and the atmosphere and a relatively quiet tannoy. Lower down,  especially in the corners are a bit better,  the atmosphere improving greatly under floodlights,  and when the famous 'bubbles' song is played. 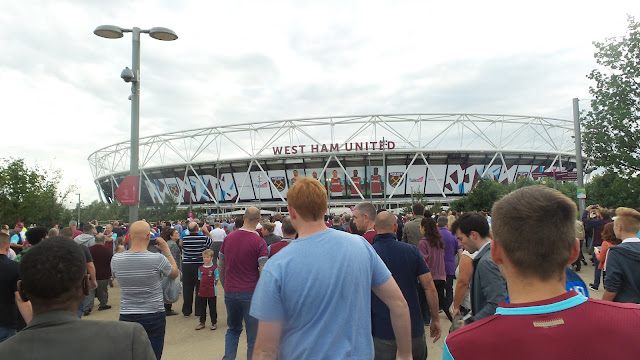 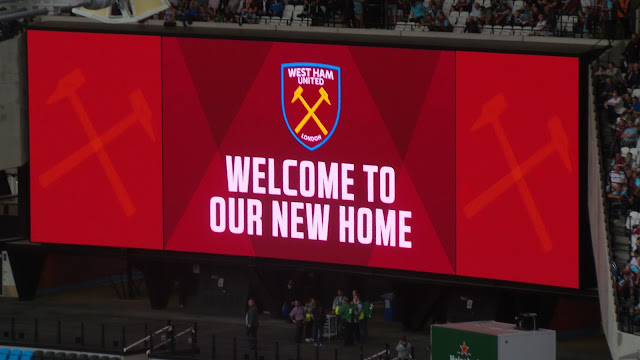 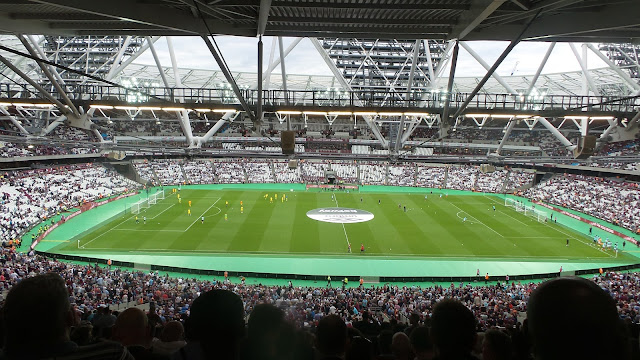 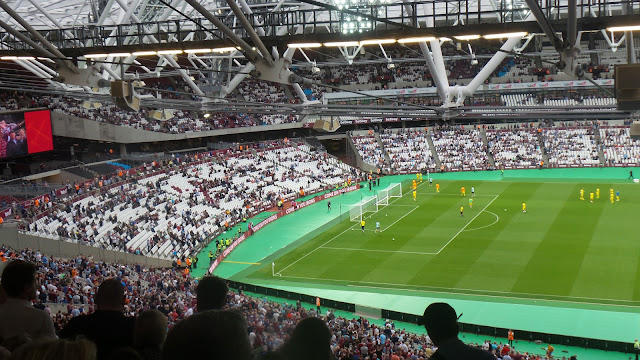 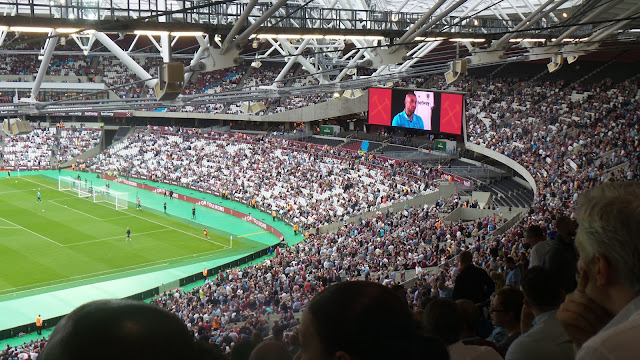 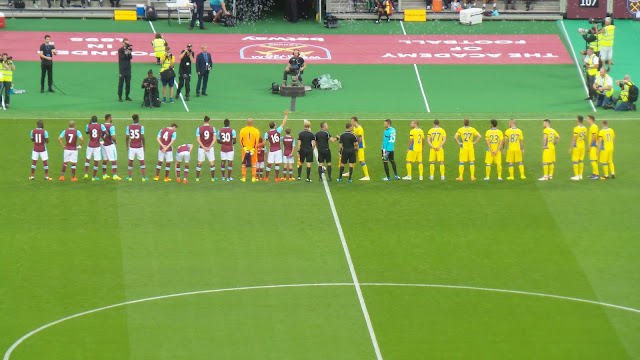 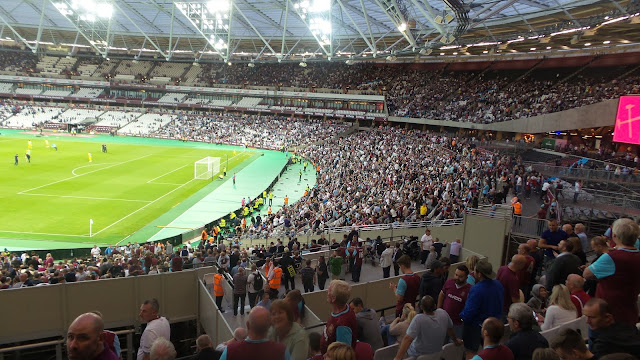 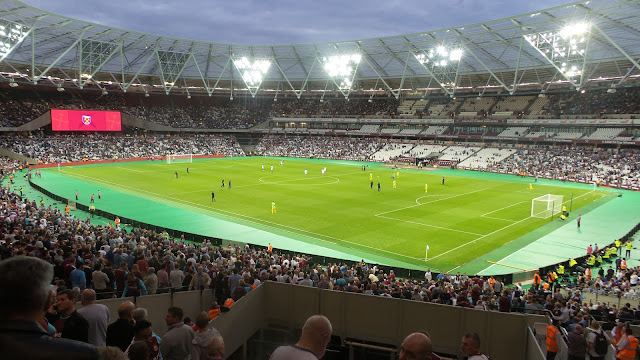 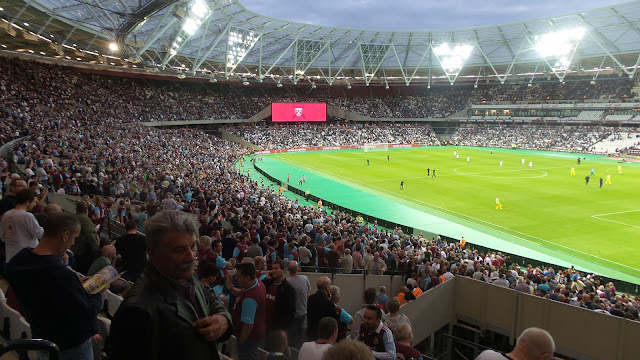 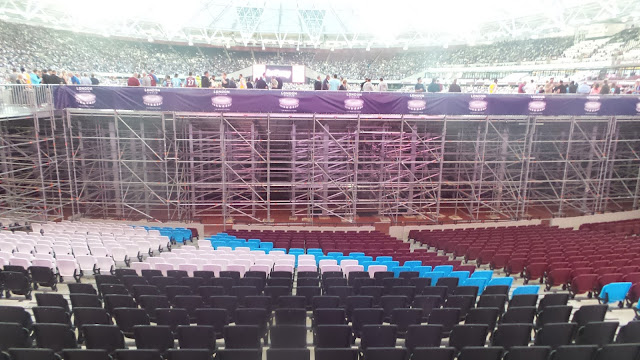 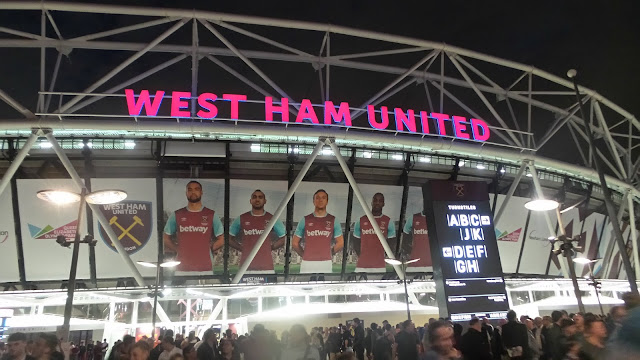