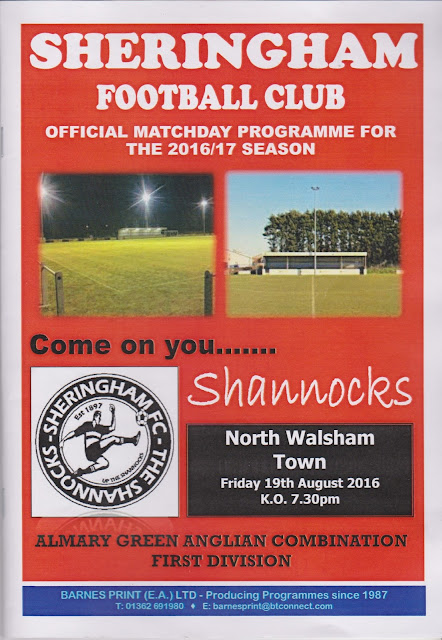 Sheringham FC were founded in 1897. They played in the FA Cup in the 1950's with their best run being to the 2nd Qualifying Round when placed there by default. In fact their only win in the competition out of 18 attempts came in 1950 as they defeated Felixstowe United in a Preliminary Round tie. Due to them being way down the pyramid they have never had the chance to enter the FA Vase, though they have enjoyed some successes in local competitions. Aside from League Cups, they have won the Cromer Lifeboat Cup on 9 occasions. In addition, the Norfolk Senior Cup final has been reached on 3 occasions - quite impressive when you consider the likes of Kings Lynn Town and even the youngsters of Norwich City participate in the competition.

They have played in the Anglian Combination for much of their history, and have won the Premier Division title twice, most recently in 2008/09. The facilities appear to be in place for promotion to the step 6 Eastern Counties League, but some work will have to be done on the field to get there. They've played in all 4 Divisions of the Anglian Combination in the last 20 years and currently reside in Division 1 which is at step 8 of the non-league pyramid, or level 12 of English football. They have also won a number of league cups including the Sterry Cup twice and the Senior Knockout Cup. 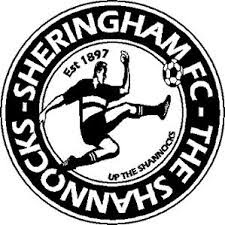 Plans were put in place for this trip last Friday while myself and fellow groundhopper Chris were attending another game in the east at Swaffham Town. Though it was a few levels lower than the game we were at, I was happy to attend as they had a stand, which is all that I really need to make me want to visit a ground.  It would be a bit further than our last journey - another 50 miles in fact, so I was hoping that the traffic would behave. In between the 2 games I'd seen a couple of Wycombe home games that had yielded a win and a draw, as well as making a 13th visit to Chesham United for their reserves game against Wodson Park. The main reason for this was to update my blog, something that took around 6 hours to do due to needing to research some of the games that I'd forgotten I'd been to.

It was a fairly easy day at work on the day of the game, and I was out by 12. After coming home I had a bath, as well as a decent lunch of a Jamaican Saltfish Pattie. I had a couple of hours to spare so I started tonight's blog, researching the clubs history. I'd sold my old computer on eBay and was not happy to receive messages from the buyer to the effect that the driver hadn't bothered to knock, so they'd missed the delivery. I don't know who to believe as the buyer (and the whole selling process) has been a bit of a pain. I was still to decide what game to go to tomorrow in the FA Cup, so I spent the final 15 minutes trying to make a choice. I fancied going to the National Museum of Computing History in Cambridge, so tried to tie in something out that way as it would subsidise my fuel costs. There wasn't too much choice, but I was still not 100% sure. Initial feelings were for Wisbech Town v Peterborough Sports in the FA Cup, as the weather looked OK in that part of the world.

With all that faffing around, I didn't leave home until 3.10, 20 minutes later than planned. My Sat Nav gave an estimated arrival time of 4.15, but I made up most of the lost time and was in Milton Keynes a few minutes after 4. I met Chris and soon we were on our way. As usual Chris used his local knowledge to avoid the Black Cat roundabout, which seems to have got it's name for the bad luck it bestows upon anyone unlucky enough to encounter it's long delays around rush hour. The journey was slightly better than last week, with only around 40 minutes delay on the initial expected arrival time. On the way we'd discussed my FA Cup options. With Chris not yet having done Wisbech yet, I settled on Sawbridgeworth Town v Tower Hamlets, as I could incorporate other stuff into my day if I went out that way. I was also pleased that my parcel had been delivered, though the buyer was soon whinging about something else. That said, the mobile signal was very patchy, so I did at least get a bit of peace for the evening. 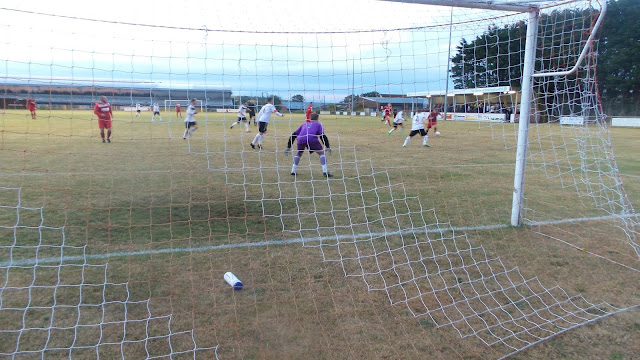 We arrived at 7.10. The food and drink facilities were disappointing - no hot food and only cans of lager at the bar, but I didn't expect much at this level anyway. What was decent was the £3 entry which included a well-presented programme, which although thin, had a decent amount to read. It was the first game of the season in the Anglian Combination and North Walsham had bought a decent support for this local derby. They were boistrous and loud all game, with several amusing chants including the claim that they had all slept with their former player Dan Reynolds Mum! The game started with the home side knocking it about very nicely and coming close on a couple of occasions. North Walsham were still in it though and it was stile scoreless at the break.  The game sprang into life a few minutes into the second half when Aaron Kay opened the scoring with a fantastic strike. From fully 25 yards, his curling shot smashing in off the bar. Had it been in the Premiership, the Sky pundits would have been purring over it for weeks. They made the game safe around the hour mark, this time a decent through ball bamboozled the visiting defence and it was left to Chris Fuller to apply the finish past the goalkeeper.  Towards the end I noticed that one of the floodlight bulbs was out, making an area of the pitch slightly dim. In higher levels the official would have relished calling the game off at a drop of a hat, citing 'health and safety' but the referee just got on with it. 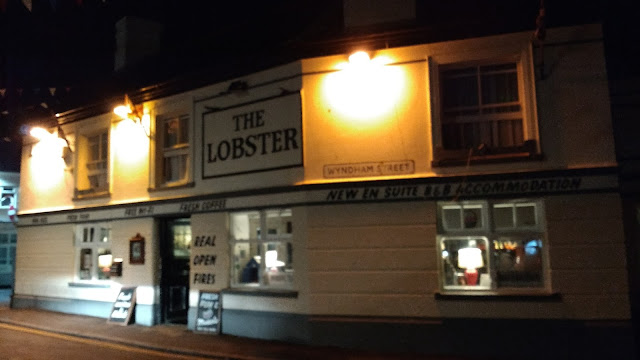 After the game we were a bit hungry and thirsty, so made our way into town. First stop was 'The Lobster' - a decent pub that had won awards. Happily there was real cider available, and we both had a pint of Weston's Country Perry which at 4.5% was a sensible one to have when driving. We then made our way to a Chinese takeaway called 'The Golden Bowl' where I had a decent portion of Duck Spring Rolls & Chips. Portions seem to be very generous in this part of the world, and so I saved one of my spring rolls for breakfast the next morning. We'd been in town around and hour before we left at 10.35 and a nice town it was too, with its amusement arcades and unspoilt feeling. I scanned through the radio looking for something to listen to on the way home. I was amused to find North Norfolk Radio which I thought only existed in the fictional Alan Partridge series. The great man was not on air himself, but they did have a decent selection of music playing. Annoyingly the signal was lost just south of Swaffham and this gave way to a depressing range of modern R&B dirge and easy listening songs that your gran would like. Nothing for fans of good music then, and this made the journey feel a bit longer than it needed to. I dropped Chris off at 12.40, getting home myself at 1.35. I have a couple of ciders whilst catching up online and watching some YouTube videos before going to sleep around 3am. 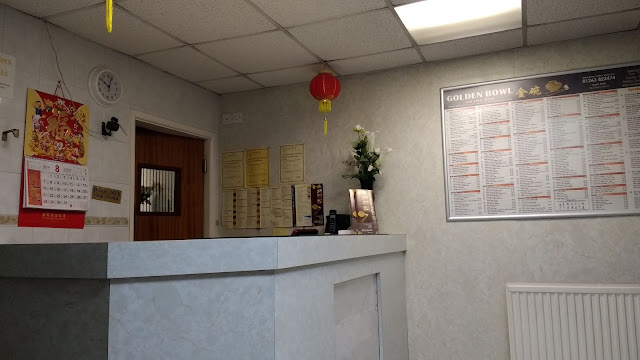 THE RECREATION GROUND is set at the back of a leisure centre, just under a mile from town. Catering facilities are basic, though this is to be expected at this level. Though the ground has just the one area of cover - enough for a good few hundred fans, it's a lot better than most at this level and is well worth a visit if you want to stick to grounds with stands in them. 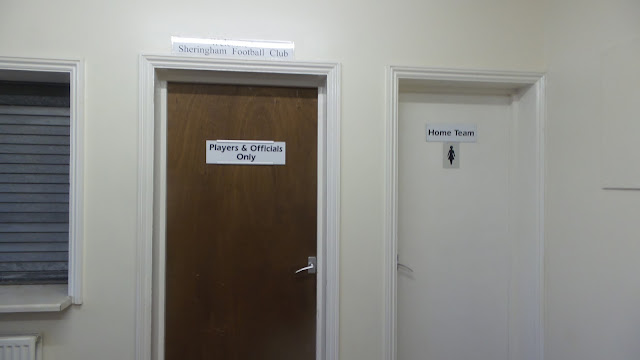 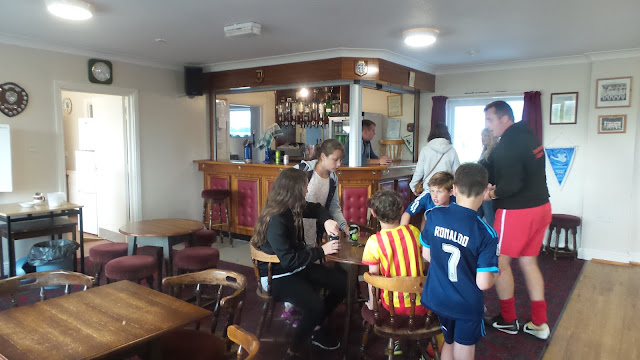 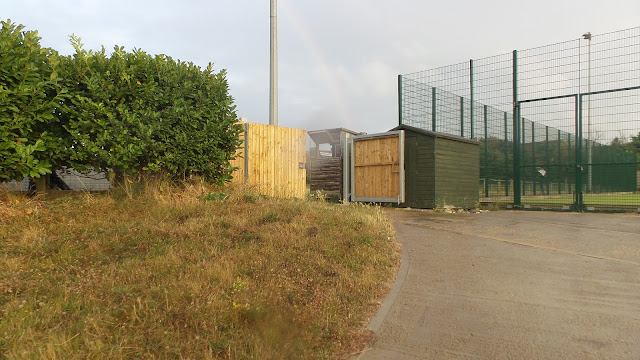 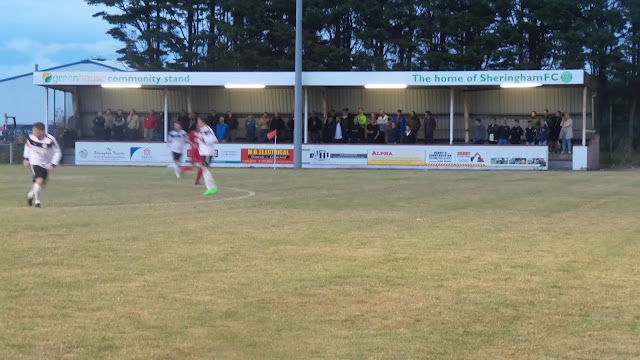 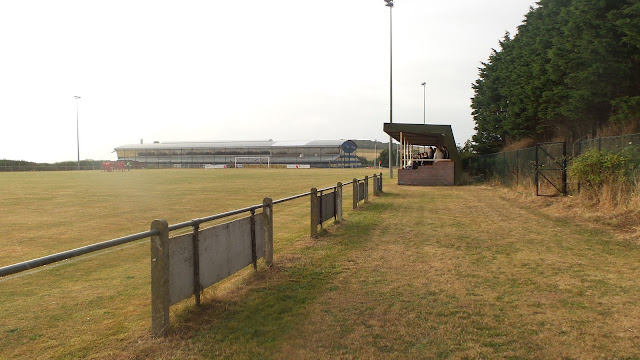 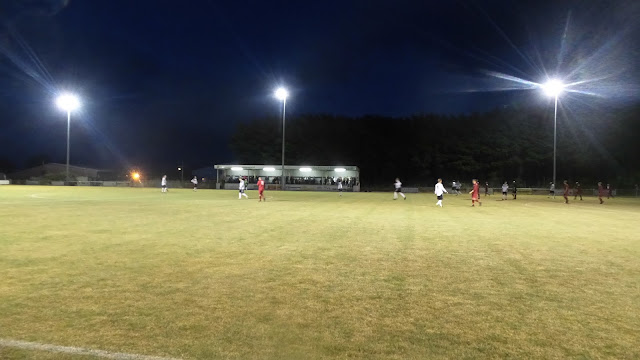 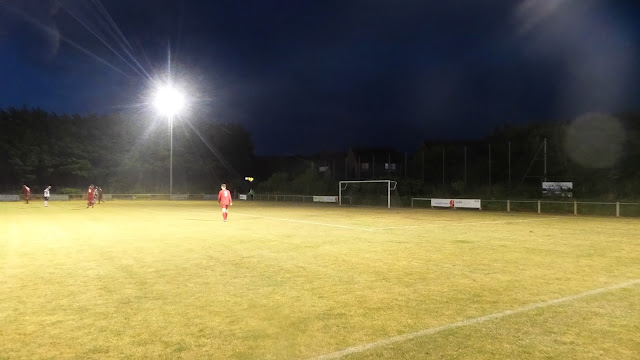 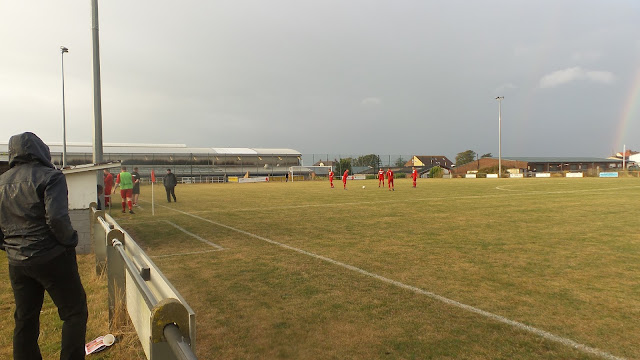 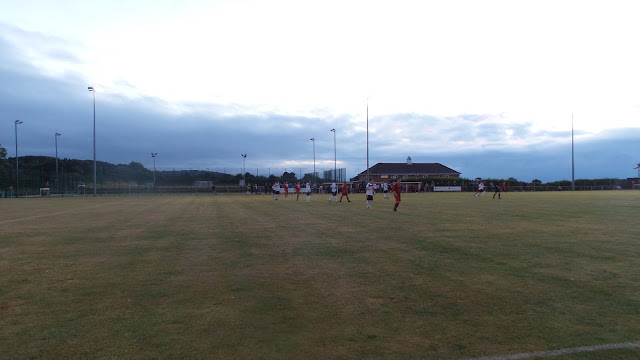