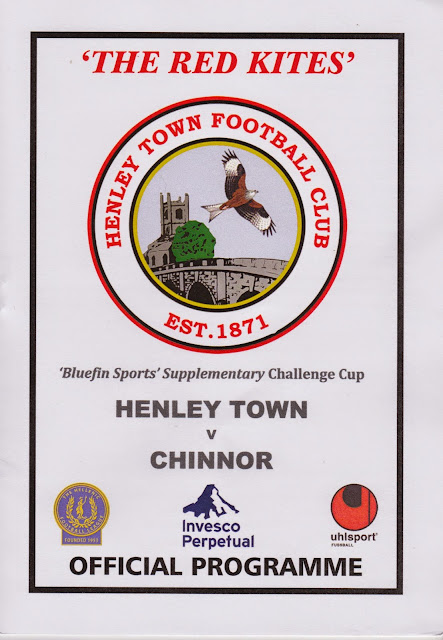 Henley Town FC was founded in 1871. They spent their early years in various local leagues, but for the most part of their modern history, they have been in the Hellenic League. Their best ever season came in 2002/03 when they finished 10th in the Hellenic Premier, back in the days when the Conference North / South had not been formed, so it was the 4th step of non-league football. They first competed in the FA Cup in 1946 when an amazing 6-6 draw was played against Uxbridge but despite this, they have never got past the 1st Qualifying Round and have not played in the competition since 2008. They have also reached the 1st Round of the FA Vase on 3 occasions. After being relegated from the Hellenic Premier in 2006, they have been in Division 1 East for all but one season, even finishing bottom of the league in 2013. Despite this, they finished 7th last season, the same place as they were in before the game. 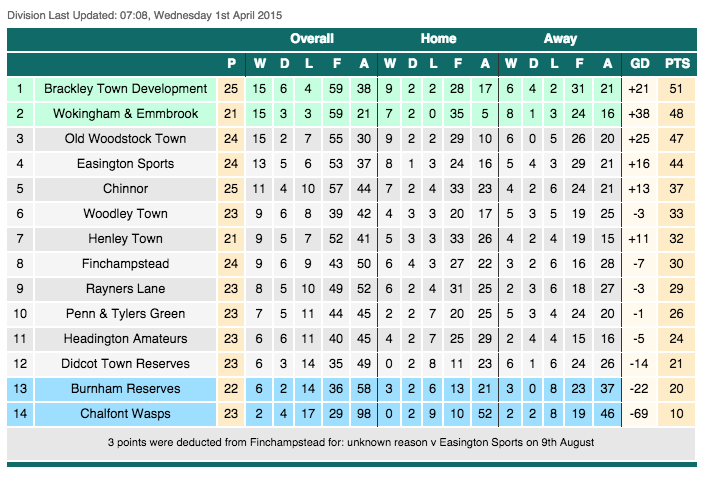 Originally on this day, I had been intending to go to Brimscombe & Thrupp as I edged ever closer to completing the Hellenic Premier. It would depend on fellow hopper Anwar though, and when he declared himself unavailable, I looked a bit closer to home. Henley Town v Chinnor was ideal, with it being one of the closest grounds to me that I had yet to visit. I'd seen Henley lose 4-0 at Bracknell Town last season in the same competition as tonight's game, but a couple of previous attempts to visit their ho,e ground had been thwarted due to various factors. Most recently I had tried to visit a couple of weeks ago for a Wokingham & Emmbrook game as they had recently started lodging there. But car troubles meant that I could not make it, and it was for this reason that I was changing my car on the day of the game, another very good reason to stay local. I most remembered Henley for its Regatta. Many moons ago we had gone with school but only got as far as the car park. Despite it being clearly a school minibus, the guy running the car park still wanted a tenner to park it, and this was back in the mid '90s. The teacher driving was a scouser and told him in his native dialect that we wouldn't bother. It's not really my cup of tea, all those daft hats and 'Hooray Henrys' so I was not bothered at all about missing out. The only other time I have been to the town is to see the film 'There's Only One Jimmy Grimble' at the cinema, back in the year 2000 and as well as enjoying the film it was a really smart and nice cinema. 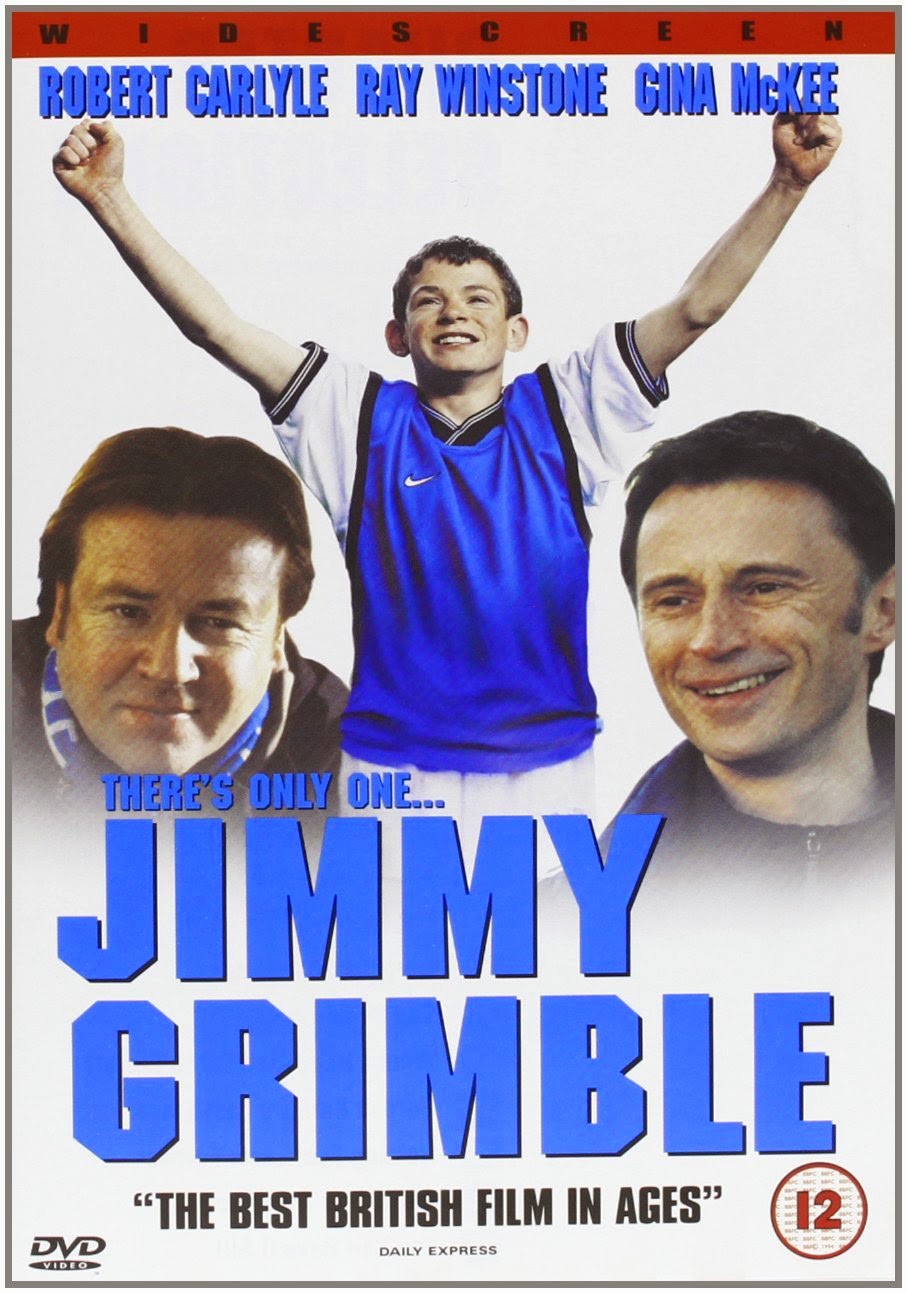 On the day of the game, I had a hugely busy day at work. This was most unwelcome, as even with rushing around I didn’t finish until 1.15PM. That was without a break too, as I skipped it so as to get away quickly after starting at 5am. I rushed upstairs and got changed before driving the 30 miles to Car Giant to get my car. I got there just after the arranged 2PM time and after dropping my old car off I went inside to sort out all the paperwork. They told me 15 minutes but the signs were not good with lots of people whining about how long it was taking. In the end, it took 40 minutes, which was not too bad, as it gave me time to catch up on Facebook and sort out my insurance. The process was pretty simple, sign a few things, listen to all the information I had to be told and collect the keys. Around half an hour later I was the ground new owner of a Renault Megane and ready to drive home. I went and checked the car over before setting off. I was pretty happy with the service I got and barring anything going wrong, I’d recommend Car Giant to anyone wanting a car. The drive home was a slow one, especially the first 2 miles which took 45 minutes to complete. Once I was on the A40 though, it was all plain sailing and I was enjoying my new car and listening to the radio, which was a big improvement on my last sound system which had awful radio reception. I got home about 4.45 chilled for a while before dinner, sorting out all my paperwork and seeing how much of a dent the car had made in my bank balance.

After having dinner I set off for Henley, leaving about 6.40. By 7.20 I was at the ground having been getting used to all the features of my new car. I was initially worried about the fuel economy looking at some of the information displayed but after resetting everything I was pleased to be getting around 50MPG for the journey after taking it easy. I paid £6 for entry and programme before going on the bar and getting a pint of Strongbow for £3.30 while I waited for the game to start. One surprise was looking at the line ups and seeing former Wycombe striker Craig Faulconbridge was playing for Chinnor. He has got to be in his mid-forties now. He came to Wycombe with a great scoring record at Wrexham, but as with so many players, his record at Wycombe was not so good. Injuries didn't help his cause and he eventually departed a few years later, if I remember correctly under Tony Adams. His team started the strongest, but it was Henley who took the lead on 12 minutes with a shot into the top of the net from just inside the area. They doubled their lead a minute later from the penalty spot after a foul in the area. Chinnor spent much of the time moaning to the referee but even so they did have a couple of half chances. The home side got a 3rd just before the half-hour mark when a shot went straight through the Chinnor keeper. I was feeling quite peckish at halftime. so I went into the bar and got some chips. It was a nice big plateful and they were amongst the best I had ever had, even beating my previous favourites at North Leigh. The second half started with Chinnor slightly muted, but it didn’t take their players long to start yapping again. It was a real shame as they had some good play, but summed more intent on getting right in the referees face. Chinnor pulled one back around the hour mark but the game was made safe on 80 minutes as the home side restored their 3 goal lead. It was a great run and a fine shot into the bottom left-hand corner. An equally good shot completed the scoring as Chinnor reduced the arrears to 4-2 with a shot into the top right-hand corner. The game ended on a sour note with several cards being handed out after a foul by a visiting player. I’m pretty sure that the visitors' number 4 was sent off and possibly more too as there was a fair bit of handbags. 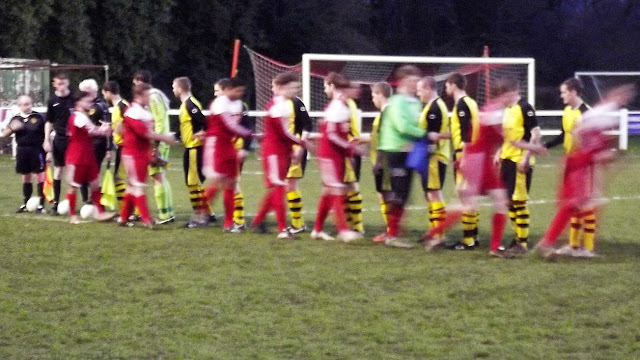 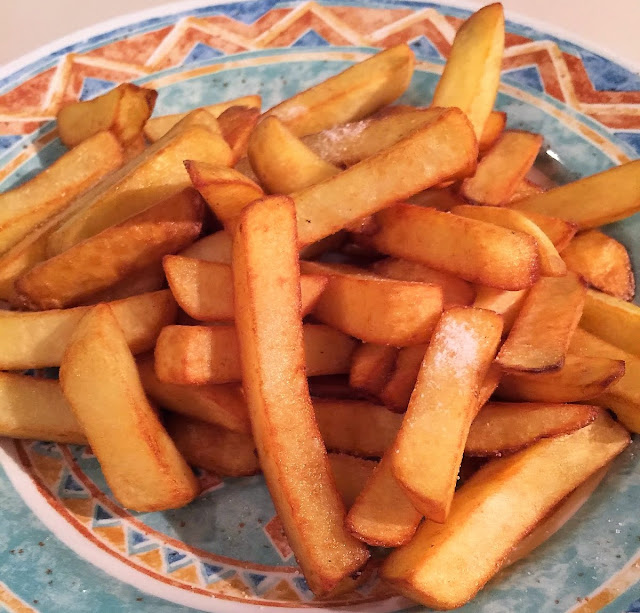 An amusing moment came when the ball went out of play. It went into an area of the ground where there were no fans. One of the Chinnor players was not happy about having to get the ball himself and had a go at the linesman about it. The official was not standing for this and told him to 'f*ck off’ or something similar, which made the player even more unhappy. It was right in front of the refereeing assessor too so it would be interesting to see what he thought. The linesman was unimpressed with his teams' antics, saying that the veterans side were even worse. I am not sure what to make of it all either, and it would be interesting to see what has happened in their other games as pretty much everyone in the ground was shocked by their actions. In any case, when I next see them I will go with an open mind, but their player didn’t exactly give a good impression when he sent me the above tweet, which was totally in keeping with the sort of thing that was going on pitchside. The team seemed pretty friendly in the pre-match warm up anyway and were having some good banter with each other and the crowd.


THE TRIANGLE is a decent enough ground to visit. It’s set in nice woodland. The only cover at the ground is a small stand, holding around 70, though a few of the seats are not in great condition. What is excellent though is the tea bar, which offers some great choices food wise and all at decent value too. The bar offers Rebellion real ales and it’s a shame they don’t do a better cider as they are a really friendly club and well worth a visit. The programme was a pretty thin one, presumably as it was a low key cup game, but the design was nice and simple. 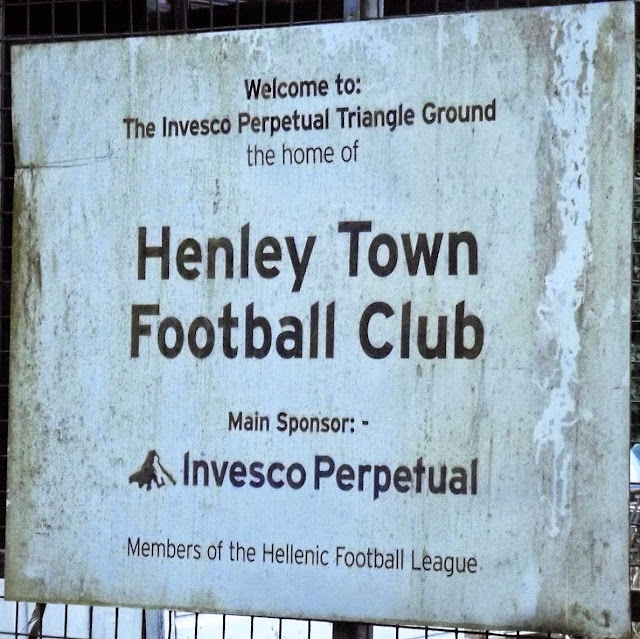 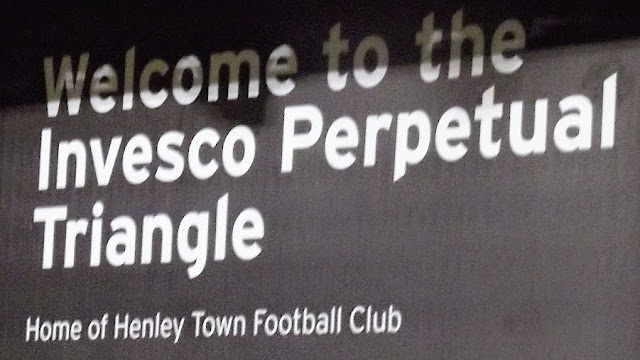 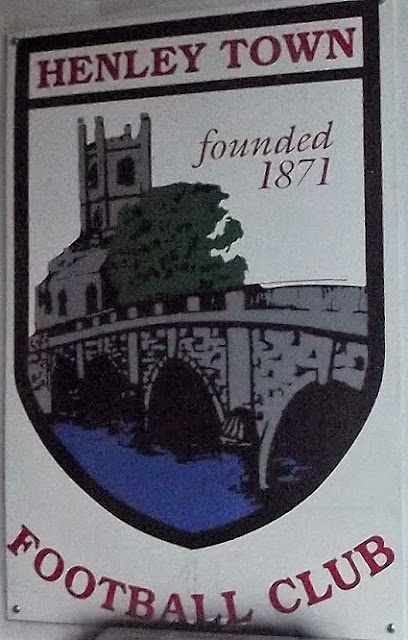 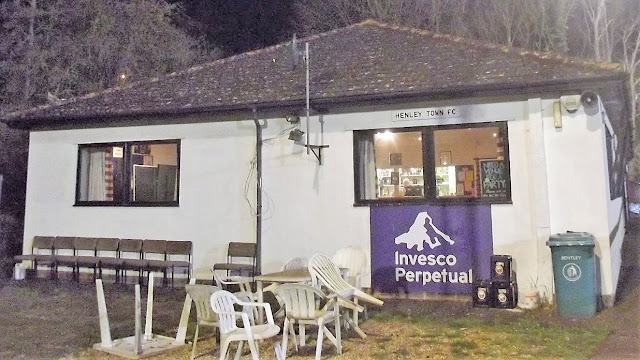 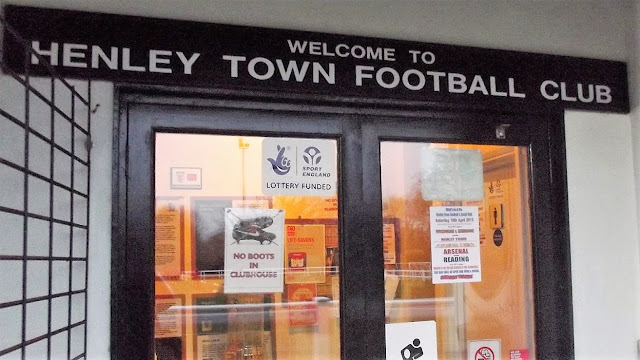 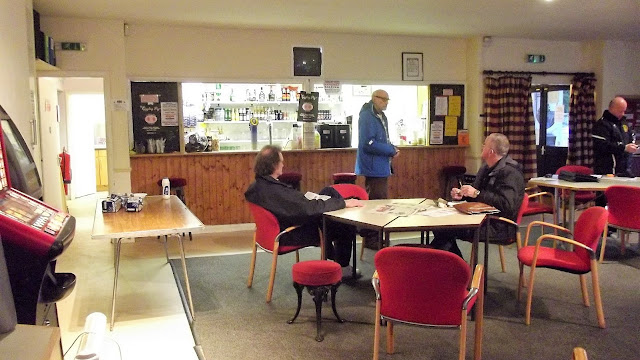 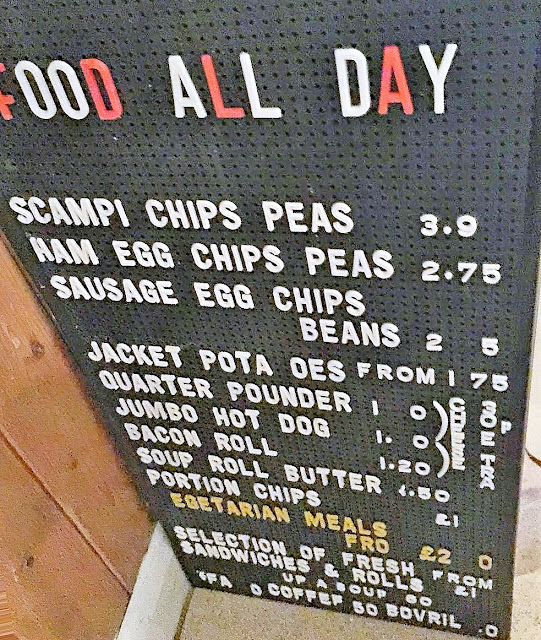 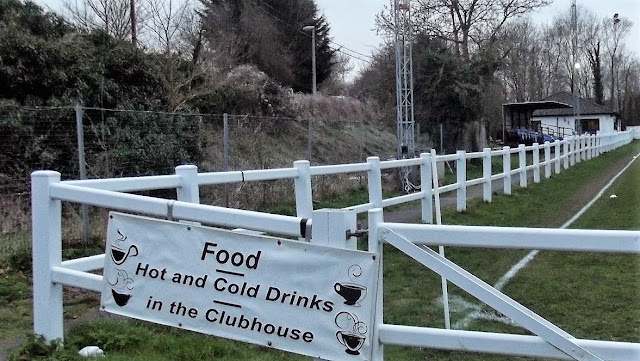 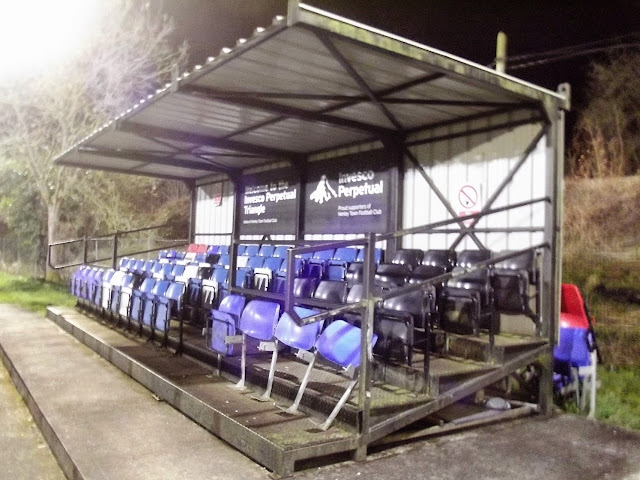 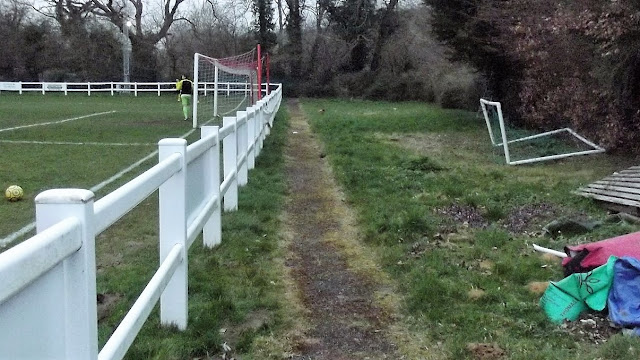 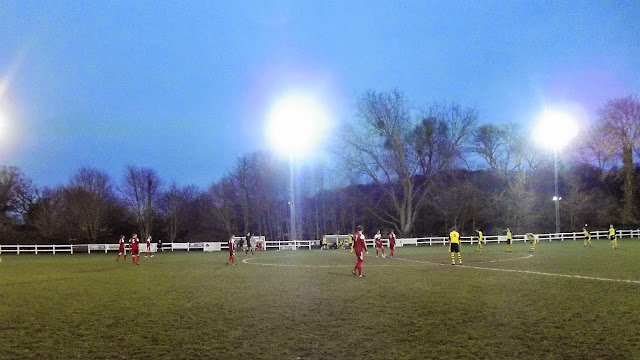 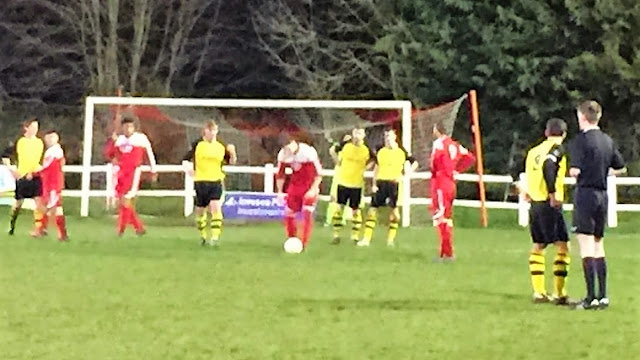