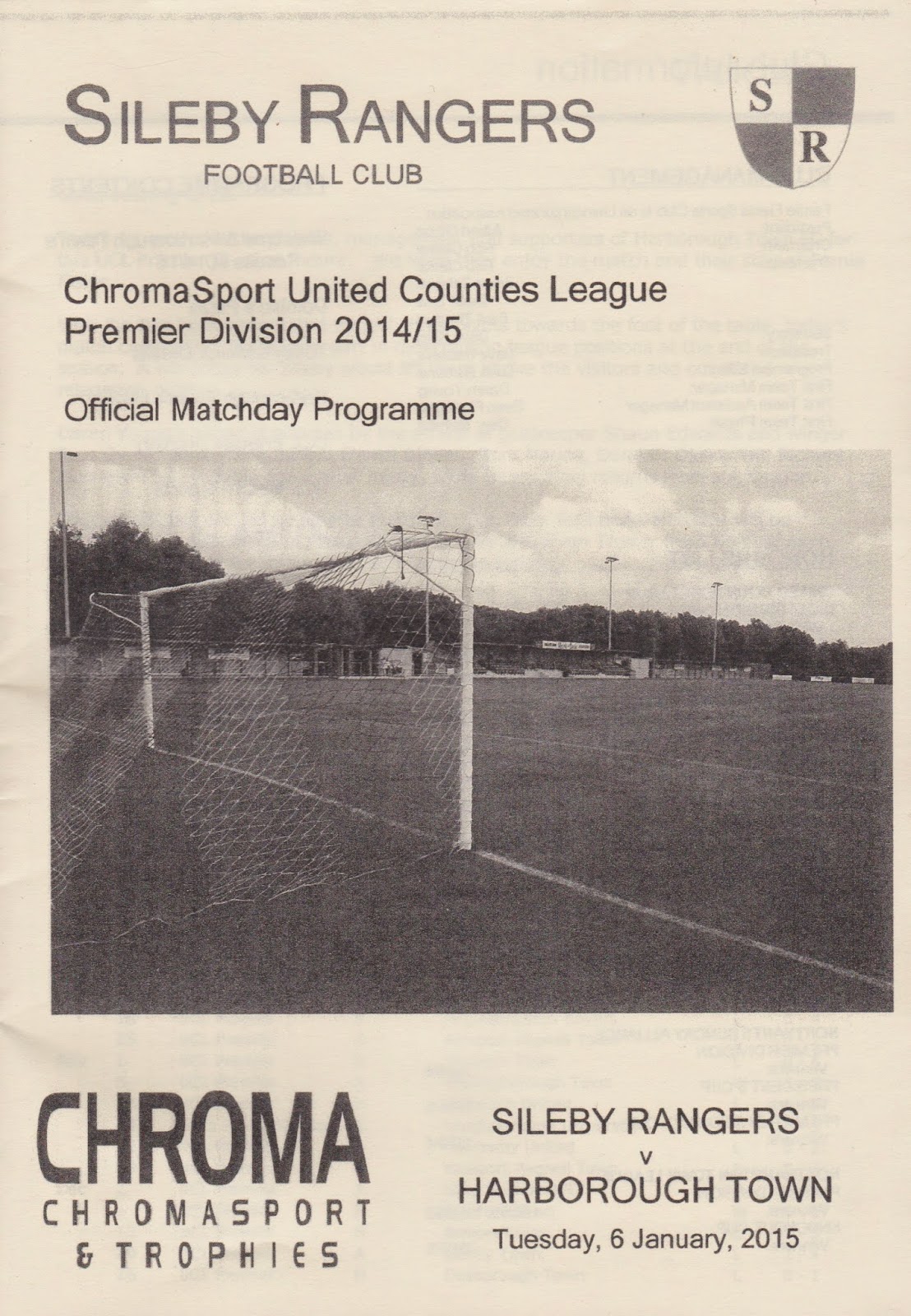 NORTHAMPTON SILEBY RANGERS were founded in 1968 as Sileby Rangers and were initially the works team of Sileby Engineering, a firm that had their roots in the Leicestershire village of the same name. They were known as Northampton Vanaid for a period, and it was during this time that they won the Northampton Town league and gained promotion to the United Counties League in 1993. They joined at Division 1 level and were champions in their first season, but were denied promotion due to lack of floodlights. They changed their name to the present monicker in the year 200, but had to wait until 2013 for their promotion when they were champions for the 4th time, but this time with the required facilities in place. Last season saw them consolidate, finishing in 15th place. They were finding the going tough this season, down in 20th place, but they did at least have a fair number of games in hand on the teams above them.

This season had been their first in the FA Cup, and they had done well to reach the 1st Qualifying Round. They beat Hillingdon Borough 3-0 in the Extra Preliminary Round and despite losing 4-0 to AFC Kempston they were awarded a tie due to their opponents fielding an ineligible player. They went out in the next round, however, after a 3-1 defeat to North Greenford United.  Last season saw them reach the FA Vase 1st Round where they lost 5-2 to AFC Mansfield. Local cups have been won, including the Northamptonshire Junior Cup on 4 occasions. 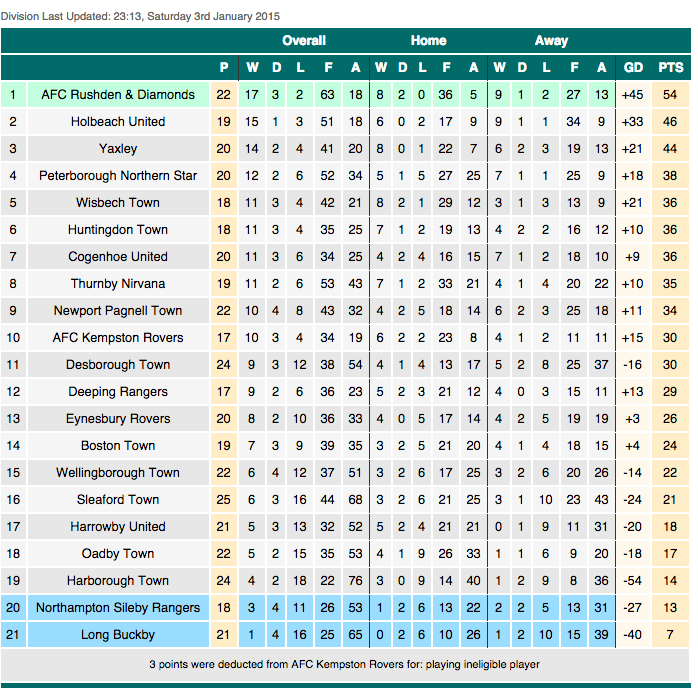 This would be the 450th ground that I had visited to see a game of football. I had hoped to reach this landmark a few games sooner, but a combination of bad weather and people being unavailable to do some of the longer trips, it had been delayed until now. I had had a really good day in Lowestoft for my 449th (and Anwar's 250th) but it had been a fairly costly one due to the distance and having to eat out. So we looked at some more local options, and out of those available Northampton Sileby Rangers looked favourite as it also had backup games at Northampton Spencer and Northampton ON Chenecks, should there be problems with the weather or pitch. On the day of the game I awoke having had a good nights sleep, though I did have a stinking cold. I had a Lemsip to try and combat this, as well as having a bath. I wanted to get my car washed as it was getting pretty filthy, but just my luck that it started tipping it down as I left. This meant that the car wash was were doing outside only, and as my car is pretty grubby inside too, I decided not to bother. While I was in town, I got a few bits anyway, before coming home and having lunch. I spent the afternoon playing my Football Manager 2015 game as Staveley Miners Welfare, as well as keeping up to date on Twitter and Facebook. I had some Chicken Balti and rice for dinner at 5, before leaving home at 5.20. 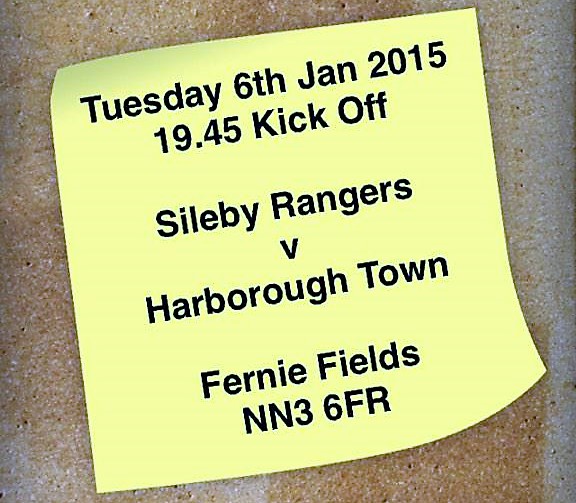 The roads really busy with lots of dawdling drivers so I didn't get to Anwar's until 6pm. Thankfully we had a good journey and were there within an hour. Initially we were a bit concerned as the gates were closed, but it turned out there were 2 entrances. We parked out on the road anyway and walked through to the turnstile, paying £6 entry plus £1 for a programme. We chatted to a friendly groundhopper and the gateman while we waited for kick off. The last time I had seen Harborough was on the UCL groundhop back in August, where they played at Deeping Rangers and lost 3-0. They had been very poor, so I was not shocked to see them struggling. I had never seen the home side play before, but with home advantage, I fancied them to shade it. Harborough were the better side in the opening period but it was Sileby who opened the scoring on the quarter hour when Simon King opened the scoring with a drilled shot into the bottom right-hand corner. A minute later the lead was doubled when his brother Aaron scored after a great passing move. It was a killer double that was harsh on the visitors. Harborough continued to push and it took a good save from the home keeper to prevent them getting a goal back from a header. Sileby started to get hold of the game and wasted a free kick and a penalty to further extend their lead so it stayed 2-0 at the break. It was quite cold by now so Anwar and I sat in the warm bar during the interval. Harborough got one back almost immediately to give them a chance of a comeback. It was all but extinguished on the hour mark though. Sileby had already hit the post shortly before but they had their two-goal lead restored with a comical own goal. A cross was put in and it deflected off of the left back Mitch Bevins and into the net. The keeper really should have done better as it only slowly trickled over the line. Chances came and went for both sides but Sileby made it 4-1 just before full time from a shot from just inside the area. 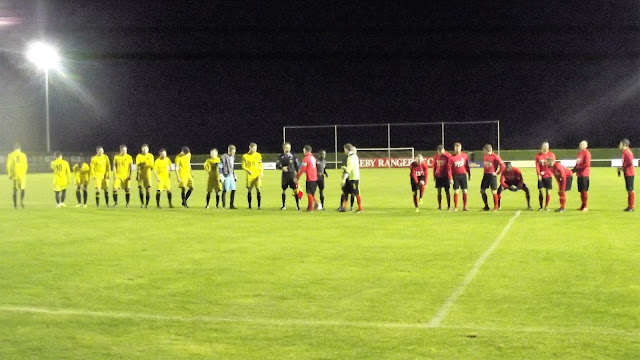 We made a quick getaway and had a good journey home on the way home, despite the match finishing at 9.50. I dropped Anwar off at 10.40 and was home myself by 11. I spent some time checking online, plus watching a few YouTube videos. As ever on a Tuesday I found it difficult to drop off to sleep, due to a combination of the huge sleep I get on Monday night (in comparison to the rest of the week) and the energy that I get from watching football. As a result, I only got around an hours sleep before getting up at 4am for work, but as usual, I didn't really feel it the next day. 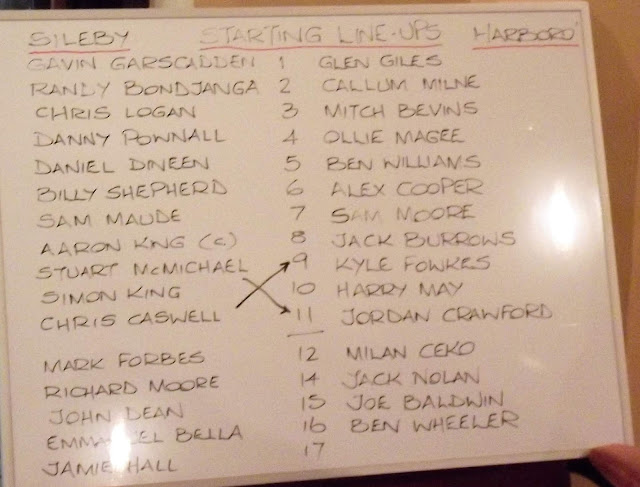 FERNIE FIELDS is an excellent step 5 non-league ground which is really smartly kept. Most of the cover is on one side with seats holding 150 and cover for another 400. There is a smaller area of seating behind the goal near the tea bar which holds around 50. The rest of the ground is open hard standing but is lined with smart hedges. The bar is large and welcoming with a fairly basic range of drinks and the tea bar offers hot food as well as snacks and drinks. 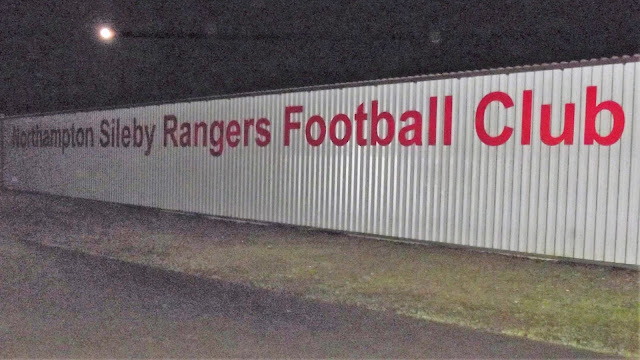 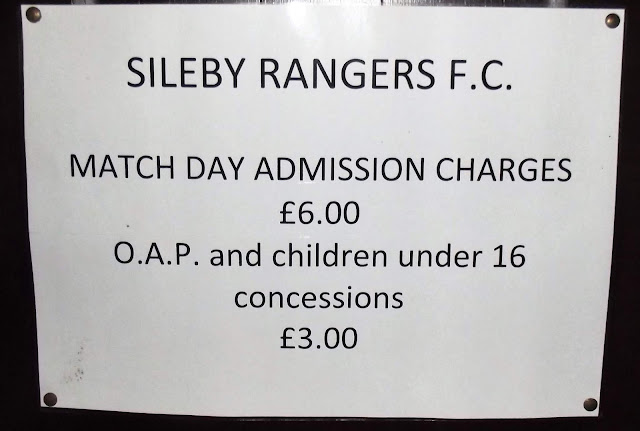 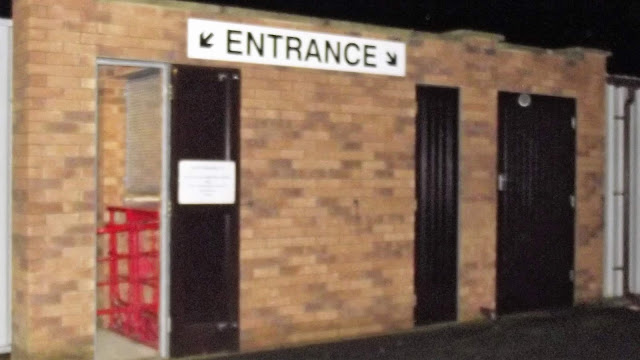 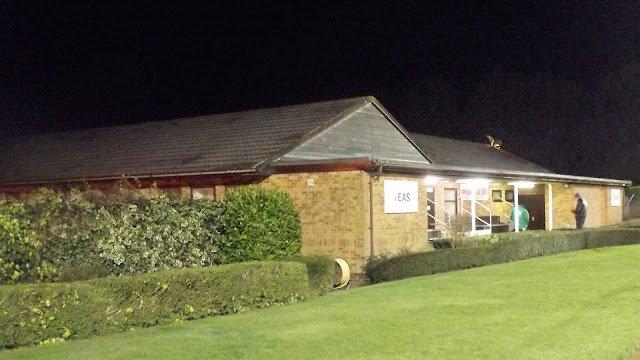 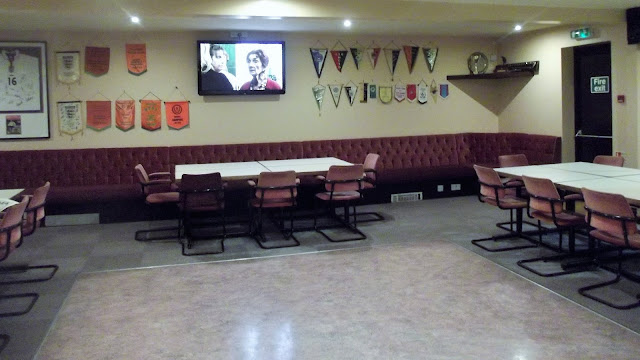 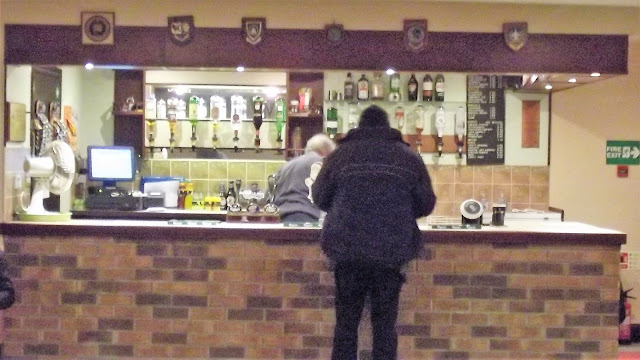 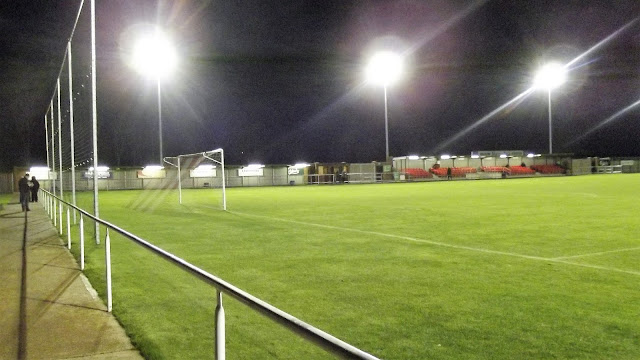 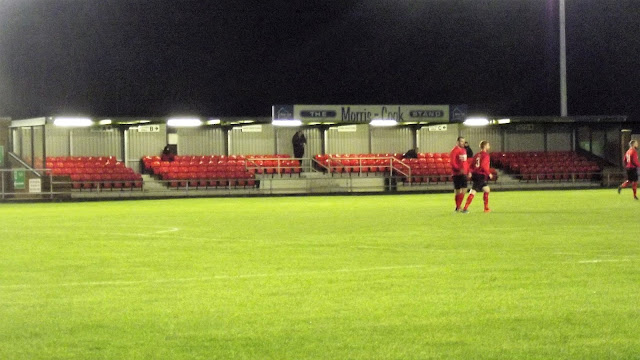 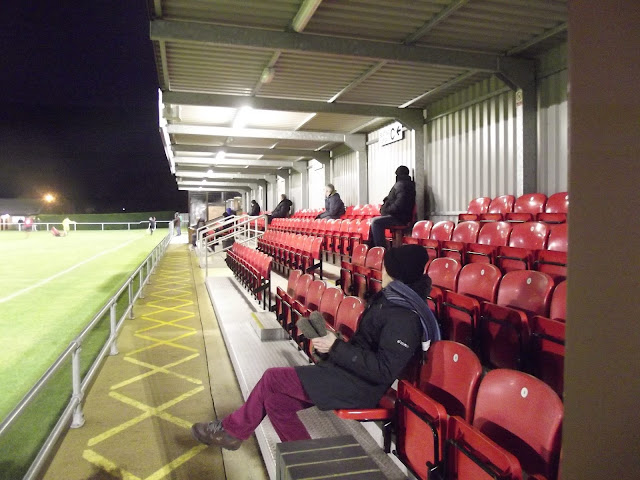 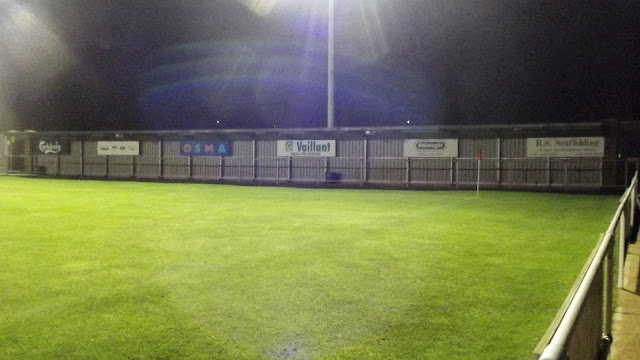 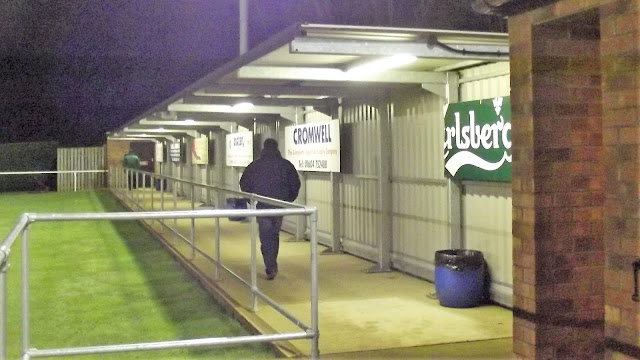 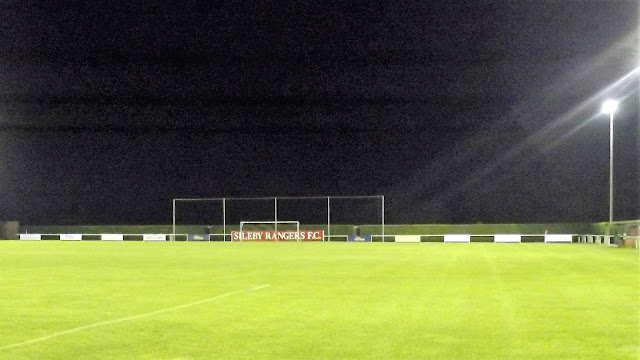 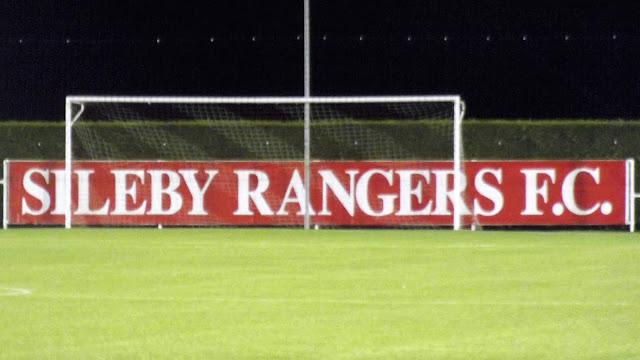 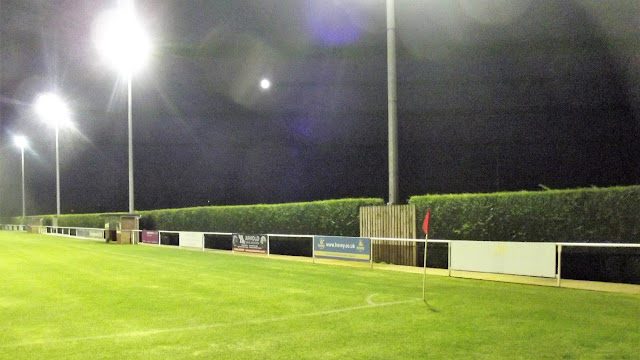 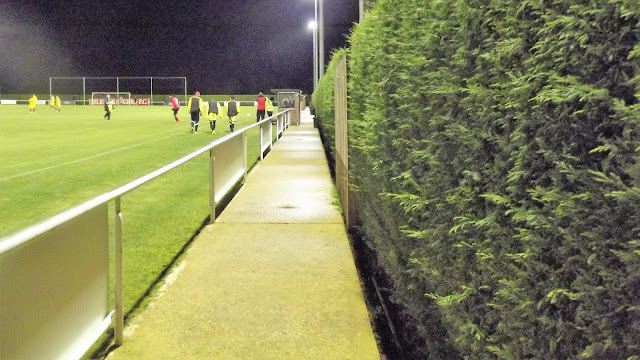 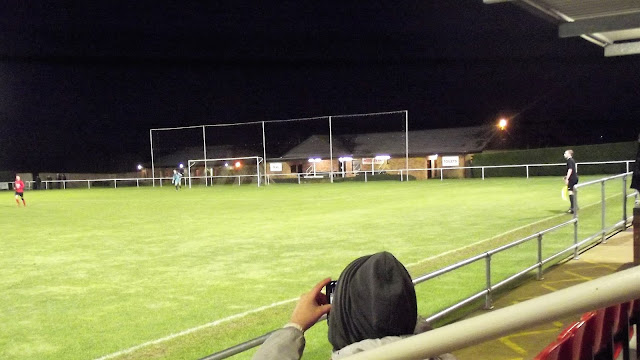 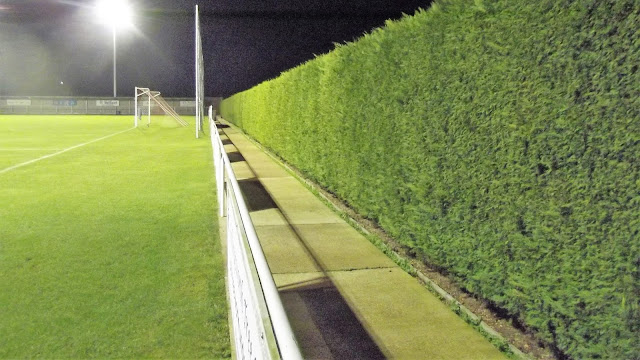 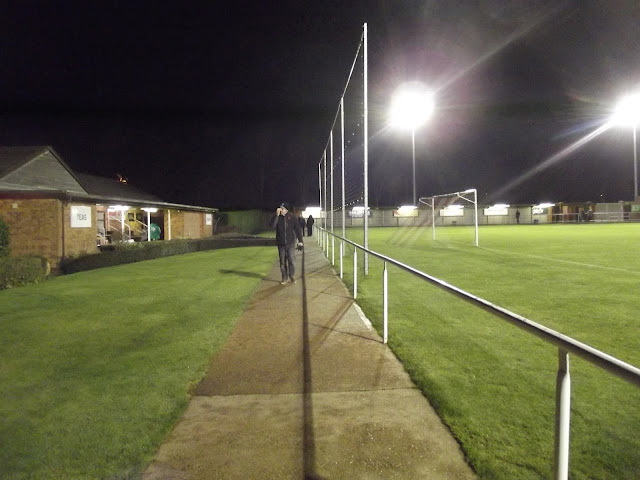 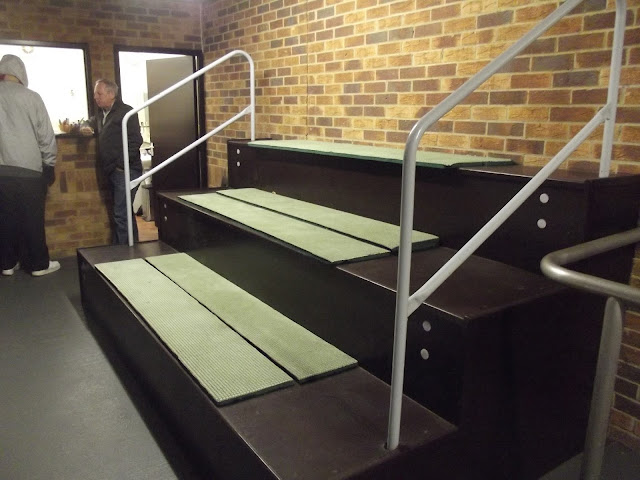