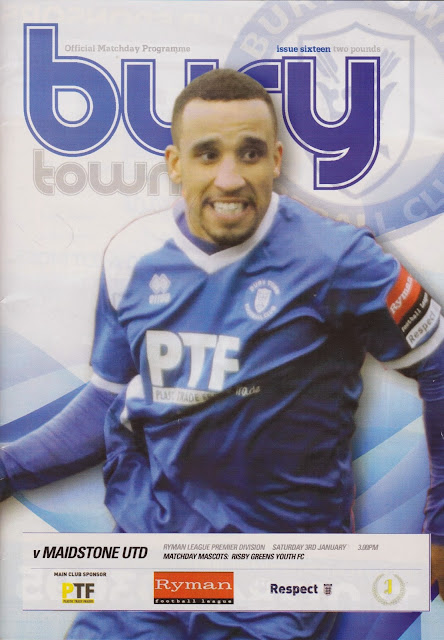 Bury Town FC was formed in 1872. They became founder members of the Eastern Counties League in 1935 and stayed there up until 1964 when they transferred across to the Metropolitan League. After finishing as runners up in 1971 (they had been Champions twice during their short stay) they joined the Southern League. Disappointing results saw them opt to go back to the Eastern Counties league in 1976 however. They remained there until 1987 when they once more decided to join the Southern League and were a lot more successful this time, at least initially, even finishing 4th in it's Southern Division in 1989. However results quickly deteriorated and they found themselves relegated back to the Eastern Counties League in 1996. A couple of 2nd placed finishes saw them promoted back up, this time to the Isthmian League in 2006. They had a couple of seasons in its Division 1 North, before transferring to the Southern League D1 Central and it was from here they won promotion to the Ryman Premier after another sideways switch. They adapted well to the new level, finishing 3rd in their first season. They finished 5th, 7th and 17th in the next 3 seasons, but the future at this level looks in doubt as they currently sit bottom of the league prior to tonight's game.

In the FA Cup, they have reached the First Round on a couple of occasions, most notably holding Bournemouth to a draw in the late 1960s before losing in a replay. They have also reached the FA Trophy 2nd Round in 1970-71 before losing to Hereford United. They got to the FA Vase Semi Final in their last season in the competition which was 2005/06 but lost out to Hillingdon Borough after a 2nd leg defeat, in a game that I attended. The club has won a number of local cups, including the Suffolk Premier Cup on 11 occasions and the Suffolk Senior Cup 5 times. They netted their record transfer income for a single player when Simon Milton joined Ipswich Town and he remains the most well-known player to turn out for the club. 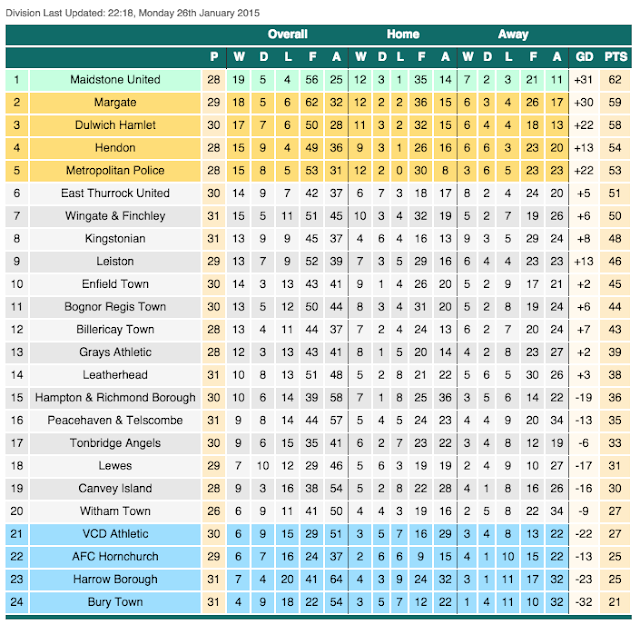 I had been attempting to go to Bury Town for some time before this match came up. My first try was when their game was given the go-ahead on Twitter. I made my way to the ground, only to find that the game had been called off whilst I was en route. The pitch looked fine when I checked, however, and it was another case of an over-cautious referee, which sadly is becoming all the more common nowadays. It potentially could have been my second wasted Saturday in a row, but luckily unlike the previous weekend, I had a backup plan in place, instead going to Soham Town Rangers. There had been a couple of other times where the club had initially confirmed game on, only for the referee to call it off, but luckily I decided against travelling on these occasions. With the weather being poor over the next few days, I was initially apprehensive about making the trip tonight, but after checking the weather forecast it seemed both dry and warm enough not to pose any problems. On the day of the game, I was stuck at home all day, waiting in for a TV that was supposed to be delivered. But considering that there had been no update since 6PM last night, I was not optimistic that they would deliver on their promised 24 hour delivery. I spent the day watching TV, looking on the internet and preparing this blog. I got my stuff together at 3.15 as I had to go and meet Anwar, but still had seen no sign of my parcel. 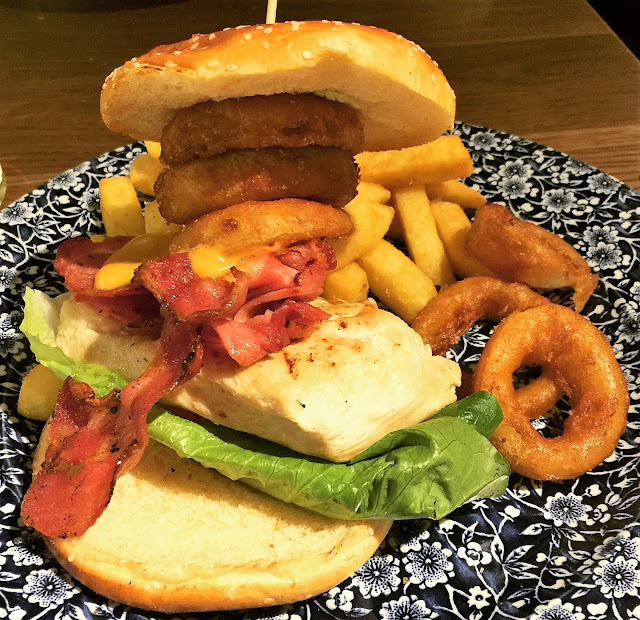 I had to go to a shop in Aylesbury to get some drinks and snacks for the game. Annoyingly this took longer than I'd intended due to a queue in the shop and traffic, so I ended up getting to his house at 4.10. After quickly checking Facebook, we were on our way and it was a pretty good journey for once. That was apart from some moron on the M25 who despite being in the fast lane, kept slamming their brakes on for no reason. Luckily everyone had taken care to leave a safe distance between each car, so there was no pile-up. We got to the ground at 6.05. This was ideal timing, as the car park stopped charging at 6. We got our coats and made our way into town. It reminded me a bit of Stamford, very well kept and the part that we walked through was unspoilt and not modern. Looking for something to eat, we didn't see many cost-effective options, and so it was once more to Wetherspoons, this time called 'The Corn Exchange'. This was one of the poshest Wetherspoons I had been in, in terms of decor, looking more like a fancy restaurant than a budget pub. I had a nice deal which was a gourmet chicken burger, chips and onion rings. That lot with a pint of Stowford Press cost me £7.09 which was good value as per usual. It was all very good, apart from the onion rings being cold. But when they asked, I did that typically British thing of not bothering to complain. We left just after 7 and made the short walk back to the ground, which took just over 5 minutes. I paid £10 to get in, plus £2 for a programme. Looking at the programme later, it was a reissue from the original game on the 3rd January. There was also a paper insert to update fans on stats and team news. In any case, it was a well-presented effort and had a decent amount to read, making it good value. I went to the club shop and bought a pen, before walking around and getting some pictures. I then settled down for the game and checked my phone for updates on Facebook. 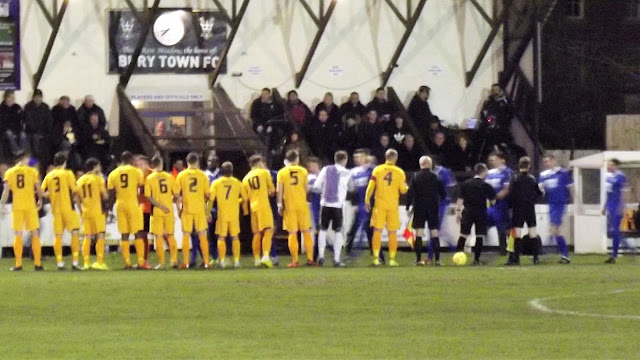 With both sides having lost their last game, they were keen to set the record straight. Obviously, Maidstone were the favourites, being top, while hosts Bury Town were bottom. It looked like it would be a routine victory as the visitors applied all the pressure, but they lacked quality in the final third. It remained scoreless at the break and they were in for a big shock at the start of the second half. Joe Whight got the opening goal for Bury Town on 51 minutes, and it had been coming after they started the second half the strongest. It was a fantastic strike and it beat former Wycombe keeper Lee Worgan all ends up. Four minutes later it went from bad to worse for the Stones as Billy Bricknell was sent off for foul and abusive language. It was the first time I had seen a sending off of this nature. I've seen players bellow in the ref's face that he was a 'f**king c*nt' and not even be booked before, so it was nice to see action being taken. Maidstone seemed more interested in disputing the referee's decisions than playing football. Eventually, they got their game together, equalising 20 minutes from time through an Alex Akrofi header. A couple of minutes later Frannie Collin won it with a superb free kick. The former Tonbridge Angels, Gillingham and Dover fan is well thought of in Kent football and he will have enhanced his reputation with this strike. The home side had a couple of half chances to equalise but Maidstone clung on for a vital 3 points. 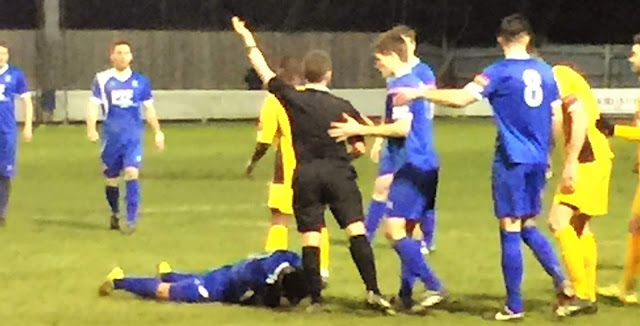 We made a good getaway, but like last week the game finished quite late, and we also had to stop for fuel on the way back. Even so I could be confident of getting back to Aylesbury by 11.30. But once again, roads were inconsiderately closed and lengthy diversions added 30 minutes on to the journey, as well as adding cost via extra miles. This meant that I did not get back to Anwar's until nearly midnight. The one small compensation was that it only took 15 minutes to get home as the roads were nice and quiet. I still had some stuff to do, including some work that I had forgotten to do earlier. After I had wound down, I didn't get to sleep till nearly 2 am, which with me being up at 4 was far from ideal. As usual, though my body coped fine though. The mystery of my missing parcel was solved though, the supposed 24-hour service furnished me with my parcel 81 hours after it had been dispatched. 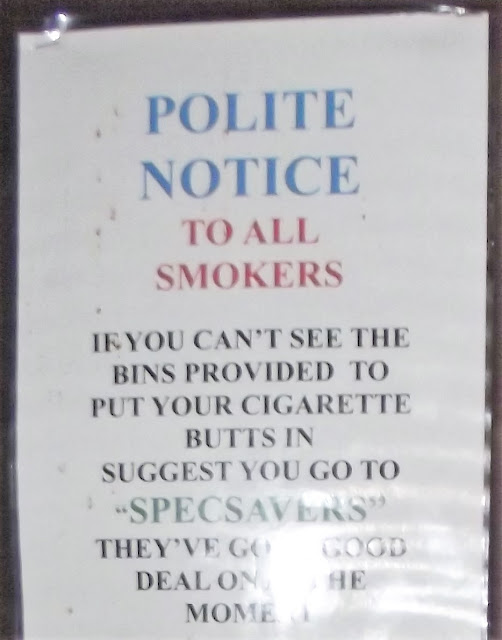 RAM MEADOW is a traditional non-league ground, set right in Bury St Edmonds town centre. There are 2 seated stands on either side, the main stand being of especially interesting and unique design. The official capacity of seating is listed as 300, but it looks more than that. There are covered terraces behind each goal, probably holding around 400 each, while the ground has an overall capacity of 3500. The club shop sells souvenirs and a small selection of old Bury Town programmes. While the tea bar and clubhouse are decent enough, it's probably worth going into town if you have time, where a much wider selection. All in all, it's a great place to visit, especially for an evening game where parking charges are not a problem in the 720 capacity car park, which is a pay and display one owned by the council 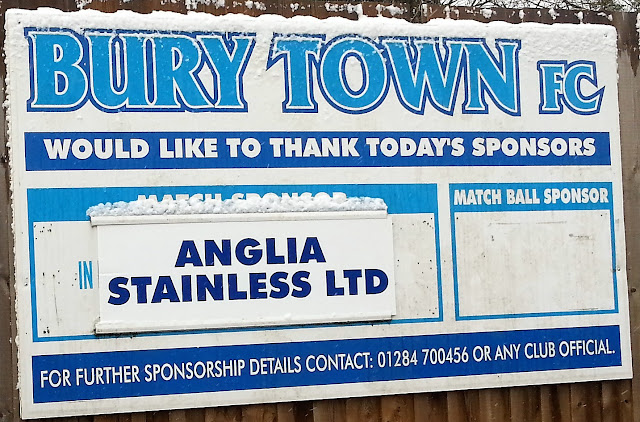 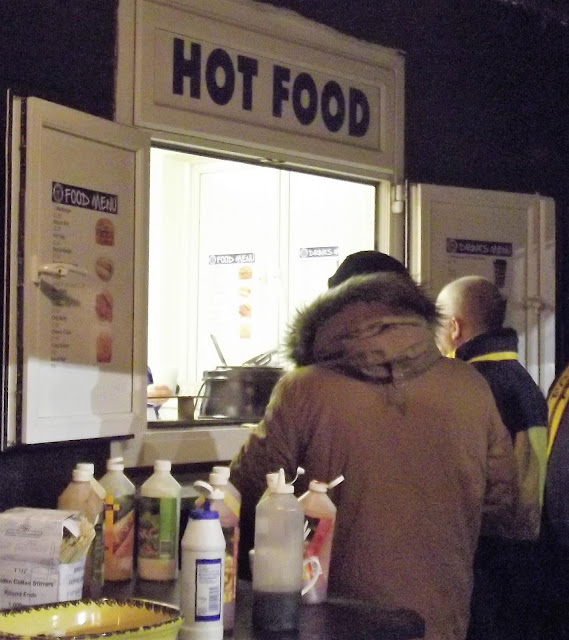 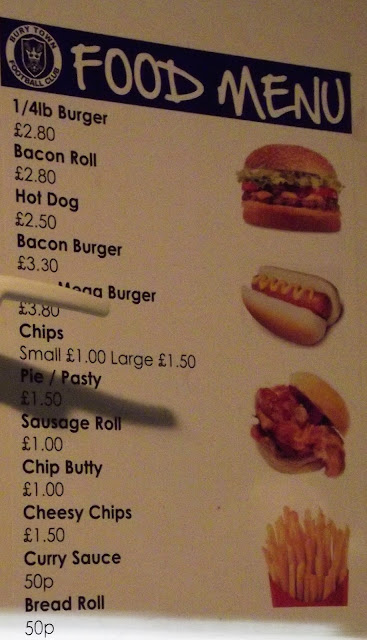 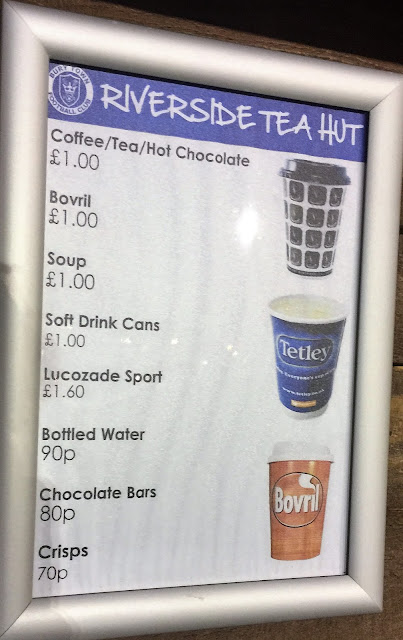 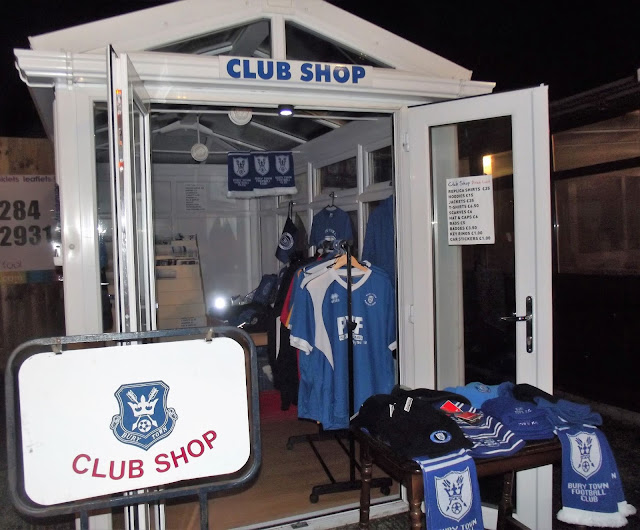 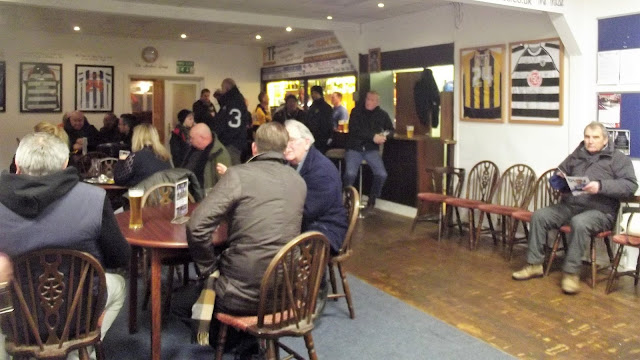 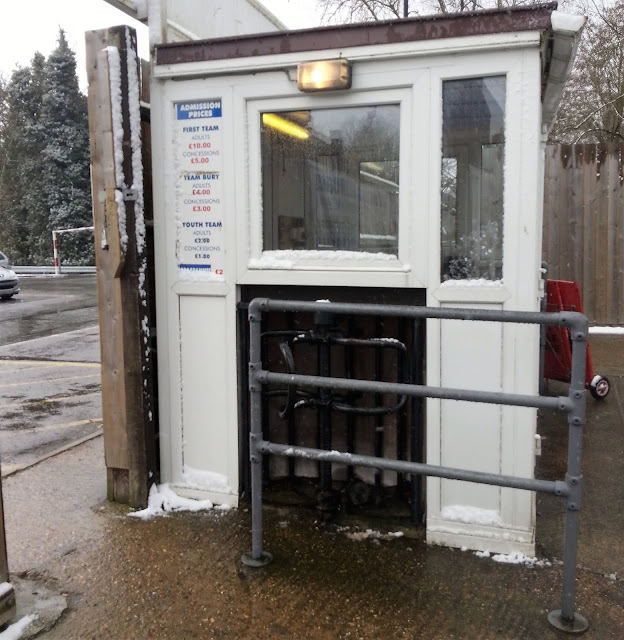 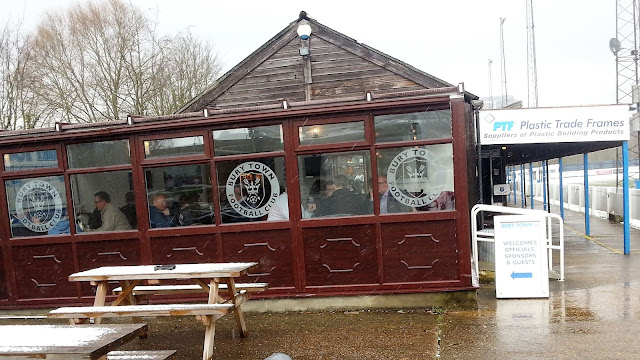 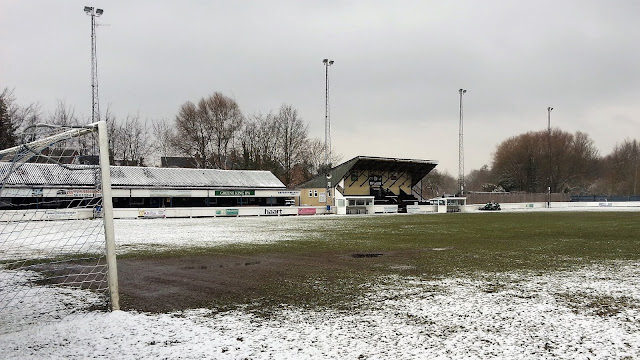 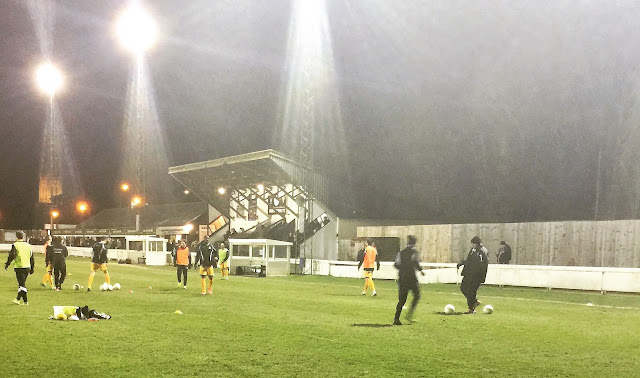 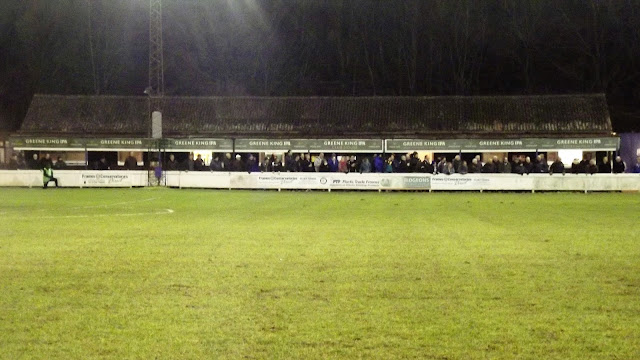 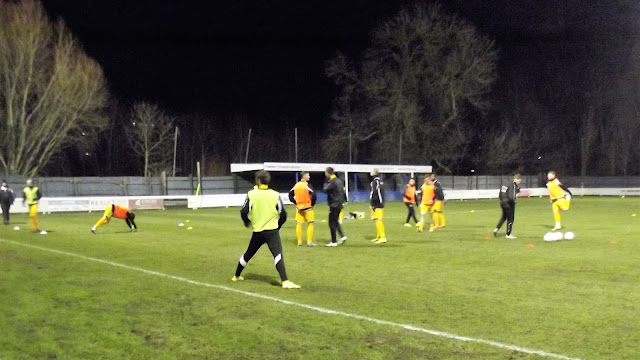 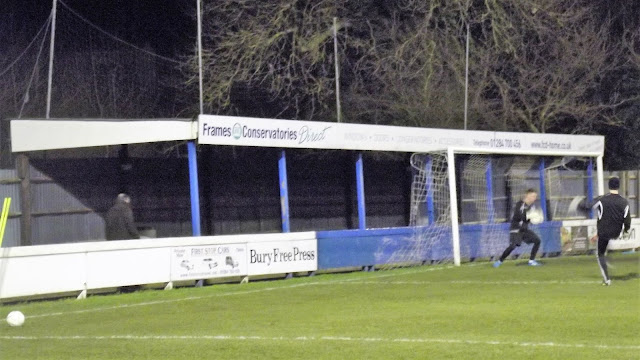 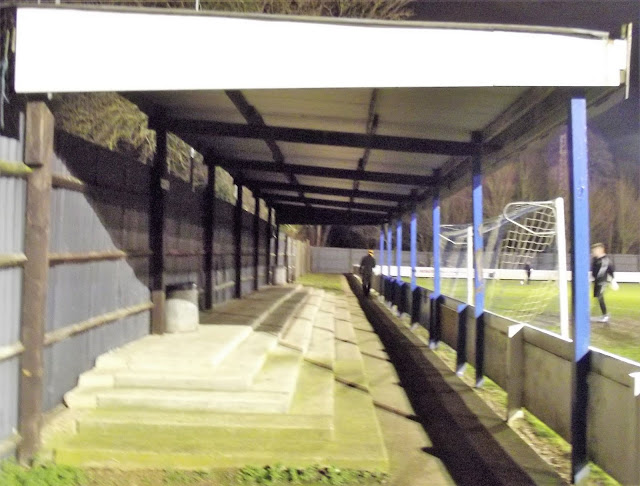 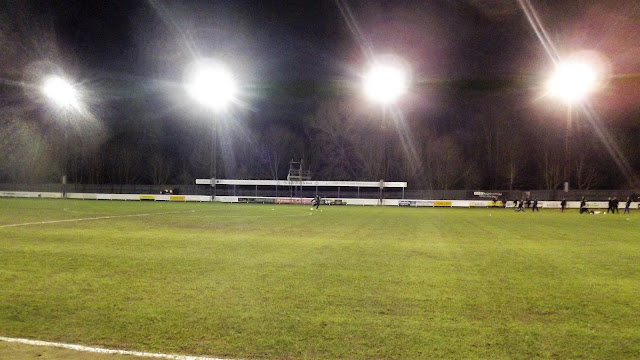 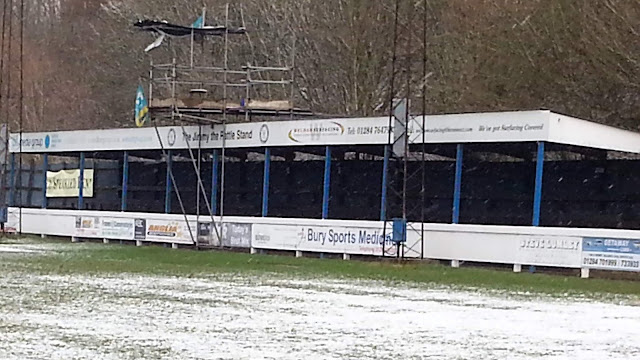 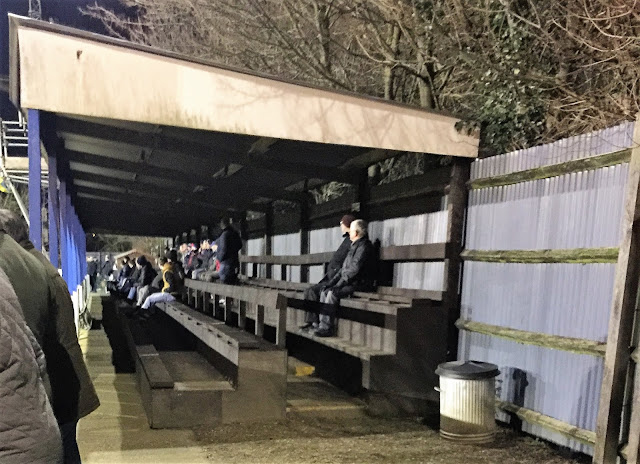 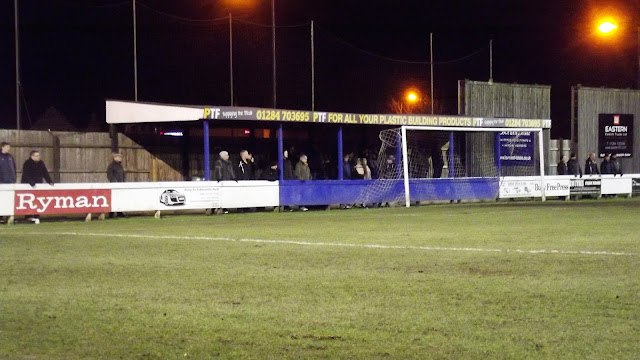