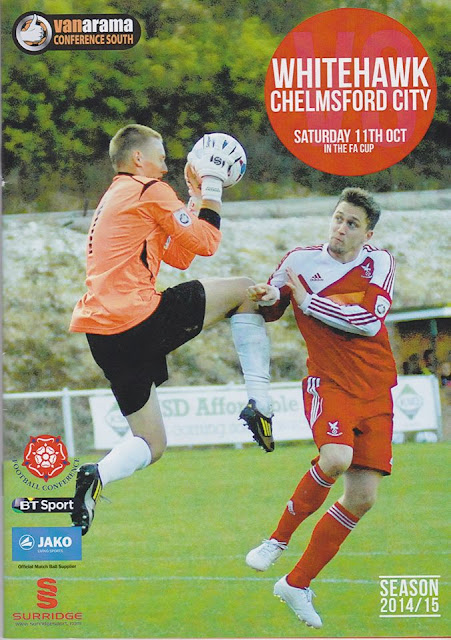 Whitehawk were founded in 1945. They had been generally very successful in the Sussex League, which they had been in since their formation. In fact they had been winners 4 times and runners up 5 times, but it was not until 2010 that they took the step up to the Isthmian League. By now they had some investment behind them, and this allowed them to win the Isthmian D1 South at the second attempt, after finishing 3rd in their first season at the new level. They were promoted again the following season, finding themselves in the Conference South. Before the season started they tried to change their name to Brighton City, but this was rejected. On the field the momentum didn't carry on, they were in and around the relegation, but eventually achieved survival, finishing 19th. They were 10th at the start of play, but were aiming for promotion after signing several big name players. The most well known to me was Sergio Torres who was a real fans favourite at Wycombe and who I was looking forward to seeing play. There was also our former striker Matt Barnes-Homer, keeper Lance Cronin, defender Tom Cadmore and a host of other well known players such as John Sullivan, Exodus Geohagon and John-Paul Kissock.

In the FA Cup the club had had their best ever run in 1988-89 but lost out to Bognor Regis Town in a 4th Qualifying Round Replay. The FA Trophy 2nd Round was reached last season before they went out to Havant & Waterlooville and back in 2010, their last season at step 5, they got all the way to the semi final of the FA Vase before losing to Wroxham. They have also won a number of local cups, most recently the Sussex Senior Cup in 2012.

I was keen to continue my FA Cup trail, having seen 7 games in the competition so far. Fellow hopper Anwar was keen to do one of the ones he had left to do in the football league. On an occasion like this we come to an agreement - I drop him off at the league ground, and then go off to a non league game of my choosing. It's happened before with him at Leicester and me at Coalville and while I was at Shortwood United, he ticked off Conference side Forest Green Rovers. Originally I was dropping him off at Doncaster and going on to North Ferriby v Grantham. However, a couple of weeks before, the Donny game was called off due to international call ups. This was soon remedied - he would go to Crawley, and I would complete one of the remaining 2 I had left in the Conference South, namely Whitehawk, who were facing Chelmsford City in the FA Cup 3rd Qualifying Round. I was originally going to come here on the opening day of the season, when they were playing Staines Town. But I decided to save the ground for a more attractive fixture and went to local side Reading Town instead.  This would be my first fixture since my last groundhop on Tuesday at Hoddesdon Town. It was a bit of a bare week - usually I like to get a fixture in on Friday night, but bar Torpoint Athletic, around a 500 mile round tip, there was nothing else, thanks mainly to the international break. Now I am keen on Friday football, but not keen enough to spend nigh on £60 on fuel alone, especially for one that not is at the top of my lists for completion. 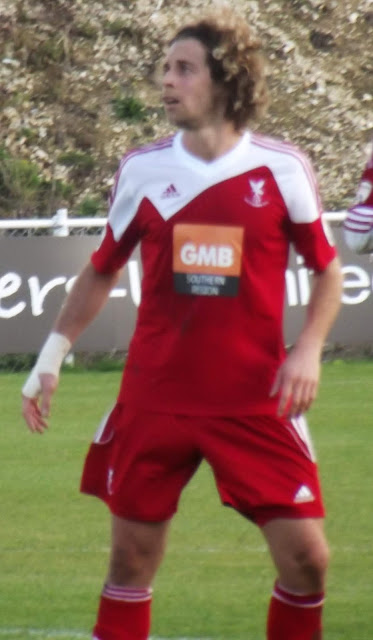 On the day of the game, I woke at around 8am and watched some YouTube videos before getting out of bed and turning on my computer. I was browsing through Twitter when I noticed that our former player Sergio Torres was on a local TV channel in Brighton. I despaired initially when I saw that I couldn't get it as it was regional, but was pleased to find an online stream. He talked about how important the FA Cup was to Whitehawk FC amongst other things. Sergio was a real hero at Wycombe, and had an interesting story about joining us. Initially he paid his own air fare over here for a trial at Brighton, but that didn't work out. So he played for Molesey, eventually ending up at Basingstoke Town. It was here that he caught the eye of Wycombe manager John Gorman when we beat Basingstoke 7-2 in a pre season friendly. He was signed up and spent 3 years weaving his magic in Wycombe's midfield before moving to Peterborough United in 2008. I had to pop down the shop to get my Mum some butter before I left, this in turn made me a bit late leaving. I had intended to go into Aylesbury beforehand, and still did, albeit rushing about. I got a couple of old games for my PS3 - Fifa 12 and Virtua Tennis 2009, as well as a couple of ciders I had not tried and few bits for the game from B&M Bargains. As a consequence, I was a tad late meeting Anwar, getting there at 11.40. I was also further delayed stopping for petrol, but was still due to get to Crawley at 1.15, and with me making up time like I normally do, I was hoping to be there by 1PM.

No such luck! My sat Nav kept adding on delays. First off there was the consistently pathetic M25 which had delays near that pig ugly bridge near the Heathrow turn off, which is constantly clogged up around there for no good reason. Then, some roadworks on the M23, with the usual invisible workmen. All in all I was delayed an hour, getting to Crawley to drop him and his little lad Hicham off. Programming the Sat Nav I was fairly content at arriving at 2.45, and with making up time, it was soon down to 2.35, but then I hit Brighton. I should have known from the first impression - it was a right tip! Not the fault of the area, it was quite nice, but there was all rubbish everywhere, thanks to the council's  obsession of recycling a million and one things. The pavement was littered with plastic boxes of bottles and cans, as well as bin bags. That didn't concern me though, but what did, was the horrific delays through the city's pathetic roads. I did about a mile in 40 minutes, cursing and stressing as I listened to BBC Sussex, which did an excellent job of providing goal updates. I'd already missed 2 goals that put the visitors 2-0 up in the first 5 minutes, then as I was getting out of the car at 3.15 I heard a big cheer as Whitehawk had got one back.

After parking up on some faded double yellow lines as close as I could get to the ground, I made my way in. I eventually got there at 3.20 and was charged £12 entry which happily included a programme, which was a pretty smart issue with a fair bit to read. My head was not in a happy state, and I needed a pint to calm it down. A pint of Strongbow was in order, and as you were officially not supposed to take it outside due to FA Rules that think we all turn into gobby hooligans if we have a pint when it's an FA Cup game as opposed to a league game, I stood near the clubhouse, ironically in the same spot the famous Wealdstone Raider made his name with a series of insults about Whitehawk.

There was no such ill feelings from me towards the club. Despite several people saying that it was 'a shithole' I quite enjoyed the ground. It was a strange and unique one I admit that, but that's what I like in some grounds, some individuality. Certainly everyone from the club that I bumped into were super nice, from the gateman to the tea bar ladies. I had to wait around 15 minutes for my chips at half time as they only had a small fryer, but at least they were freshly cooked. The game was an incredible 4-4 draw, annoyingly due to errors with piucture links on here my newspaper clipping has disappeared, but it's one of the best games I've ever seen.

I made my way back to the car, having seen around half of a cracking game as I didn't have clear sight of Whitehawk's equaliser, only seeing the ball go in through a crowd. I was pleased that Wycombe won 3-1 to go top of League 2 as our dream start to the season continued. I had to deal with the same road closures that I dealt with on the way in, with no diversion signposted. It was even worse for some Chelmsford fans I know as they didn't get to the game till nearly half time the poor lads. I got to Crawley at 6, and had the same crappy traffic on the M23 that I had suffered on the way there. From then on it was fairly straight forward. I dropped Anwar off at 7.20, getting home myself at 7.50. I spent the rest of my night watching the Northern Ireland v Faroe Islands game, and even had a nice chat with my Grimsby pals, jubilant with their 1-0 win at Wrexham. I also did some of this blog and had a couple of pints before going to bed around 11. 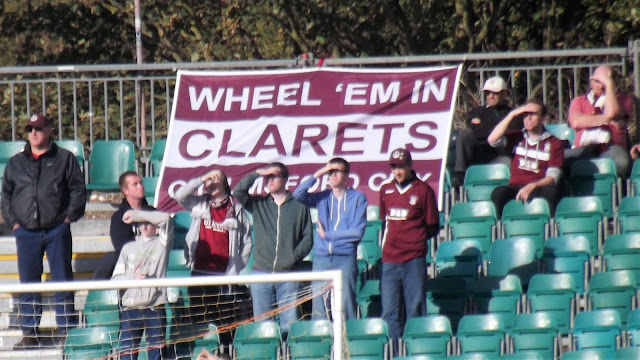 THE ENCLOSED GROUND must have been a real pretty ground back in it's day. Certainly the far side which is out of bounds to fans, still looks great with it's banking where the ground has been carved out. The near side includes a small stand holding around 200. plus some hard flat standing. Both ends contain some seats from Brighton's old Withdean stadium, one covered, the other uncovered. They are not the prettiest, but they do the job I guess.

The bar and tea bar are standard football fare and do the job well. There was no club shop that I could see, but I'd recommend a visit to Whitehawk as they are a nice friendly club and it's a good relaxed atmosphere. 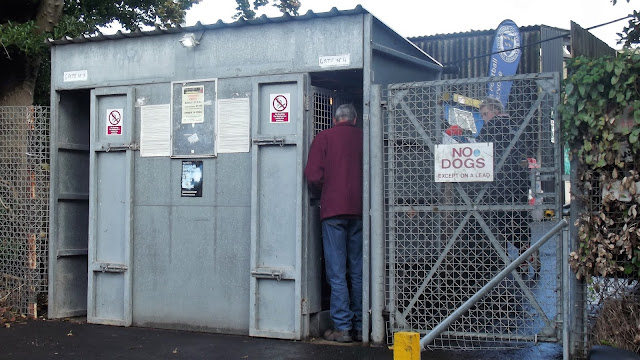 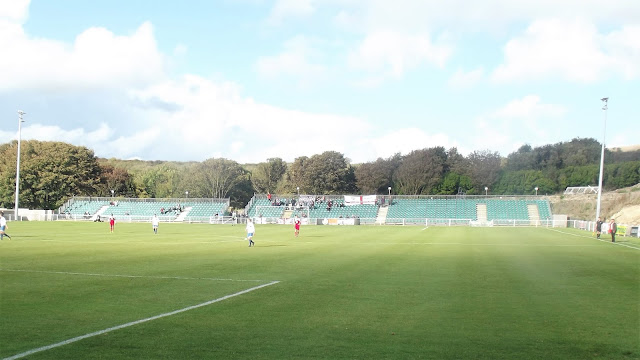 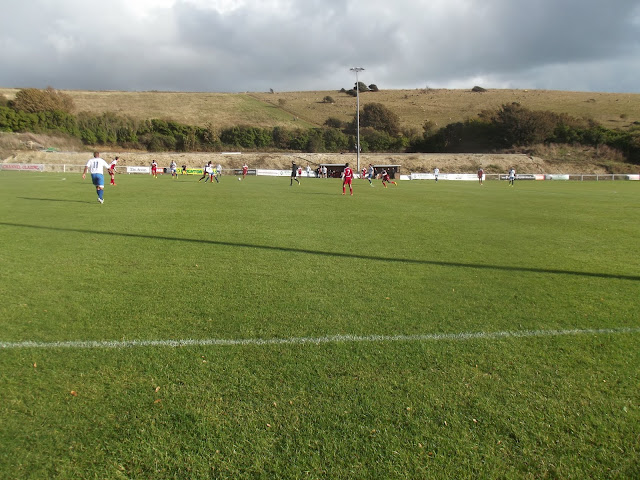 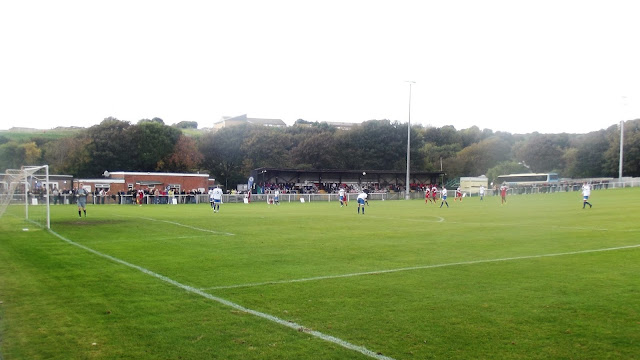 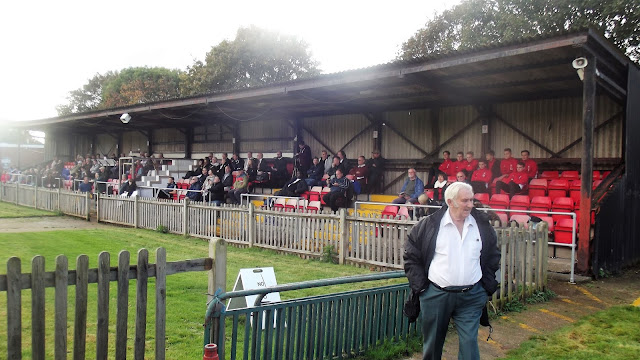 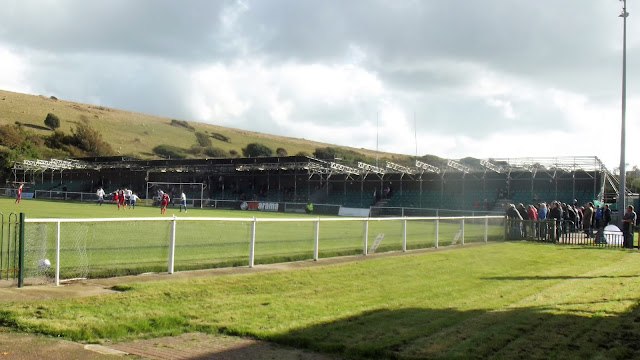 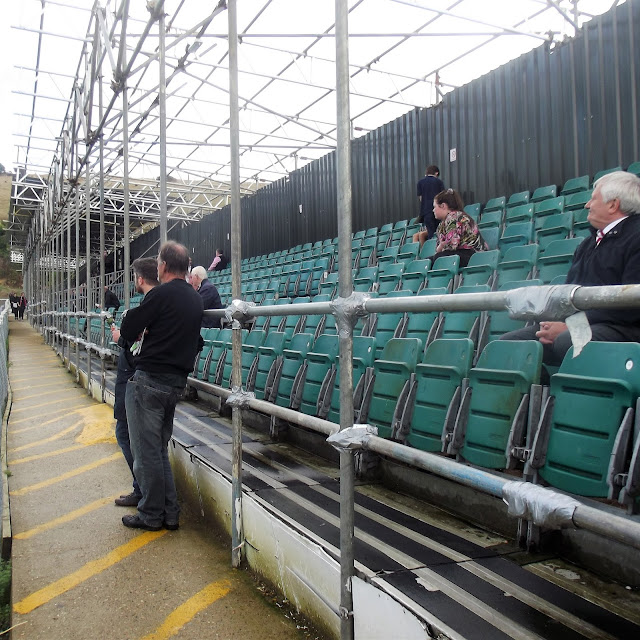