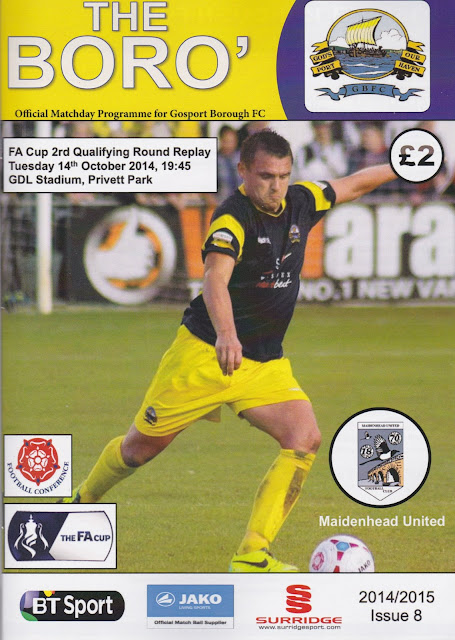 Gosport Borough FC was founded in 1944 and played in the Hampshire League until 1978 when they joined the Southern League. They had many successful years in this competition, finishing as high as 7th in the Premier Division in 1989, as the time that was step 2 of the Non-League Pyramid, well before the formation of the Conference South. Sadly the club suffered a bad few years after that, suffering 2 relegations in 3 years and going down to the Wessex League. They never really looked like returning to the Southern League over the next 10 years, but at the turn of the century, their fortunes gradually improved and in 2007 they were Champions of the Wessex League Premier Division, thus winning promotion to the Southern League D1 South and West. 5 seasons at that level ensued but playoff wins in 2012 and 2013 saw them secure a double promotion to the Conference South. After struggling at first, they recovered and finished in a mid-table position of 12th. And that is where they sat, league-wise, at the start of the game.

FA Cup wise, tonight would provide an opportunity for them to at least match their best ever progress in the competition. They previously got to the 4th Qualifying Round in the 2012-13 season before going out to Slough Town after a replay and missing out on a game against Mansfield Town in the process. The FA Trophy has provided more glory for them, last season they had a fantastic run to the final but lost 4-0 to the Conference champions Cambridge United. As a Wessex League club, they reached the Quarter Final of the FA Vase on 3 occasions. 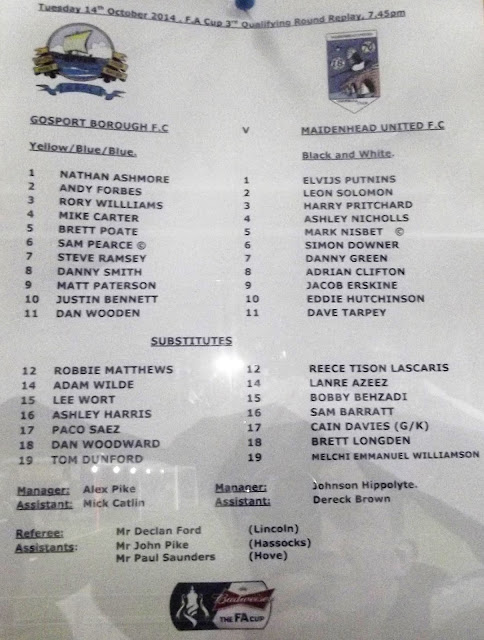 Like Saturday I wanted to do an FA Cup game, this would now be 9th game of the season in that competition. There was a choice of 2 potential games - either Warrington Town against Colwyn Bay or Gosport Borough v Maidenhead United. I spoke to Anwar and we both agreed to opt for the latter, seeing as it was nearer. It would also mean that in the past 2 games I had completed the Conference South in terms of groundhops, adding it to the 92, the Conference Premier and the Southern League D1 Central in terms of leagues completed. I could only hope that the traffic would be kinder to me than it was on Saturday, and made up my mind to allow extra time for any problems that may crop up. It was my day off as per usual, so I spent the day chilling at home. I went down town with my Dad to kill time and also to see about repairing the PS3 console I bought recently. I took it into Snowies, who have a reputation for being pretty crap. The fears proved to be correct, they wanted £70 to repair my PS3 Blu Ray and didn't seem that interested anyway. In the end, I ordered a secondhand one from CEX online, at least that comes with a 12-month guarantee and I should get back the £25 that I spent on the old one with a bit of luck. I also got drinks and snacks for tonight, before going home and having lunch. As is often the case, I was restless in the afternoon, just wanting to get out and go to the game, and so I was glad when 3.15 arrived and I could make my way to Aylesbury to pick up Anwar. I got to Anwar's at 3.40 and checked Facebook while I waited for him to get ready. Soon enough we were on our way, with minimal delays forecast. It turned out to be an hours delay, thanks to the rush hour traffic.

Eventually, we got to Gosport at 6.50 and parked up in a nearby side street. We had spotted a parade of shops including a chippy and Chinese takeaway. I was erring towards the latter because chip shops are usually rubbish down south but how wrong I turned out to be. This one was run by a Scouse lady and I was delighted to be able to have Haggis and chips which was a large portion and delicious too, and only £3.40. We made our way back to the ground, picking up some stuff from the car on the way. We got in around 7.15 and after paying £13 entry and £2 for a programme, I eat my dinner. I thought £13 was a bit steep for this level, feeling that around £9 would be more appropriate but it's around the average for this level with St Albans charging a ridiculous £15. At least the programme was a decent issue for the price. Before the game, I had a look around the club shop which again was pricey at £10 for a pennant and no pens which I also like to collect. When I came out I chatted to a steward who did the same job at Wycombe around 15 years ago. I then got some pictures of the ground before taking a seat in one of the stands for the game. Maidenhead had the better of the early exchanges but gradually Gosport started playing some good football. The home side opened the scoring on 37 minutes with a good shot that went in off the bar. Gosport had the better of the game and on 57 minutes it was 2-0 as Dan Wooden got his second goal, the shot was one that the Maidenhead keeper really should have saved. They wrapped it up in the final minute with a great goal that lobbed the keeper from long range. 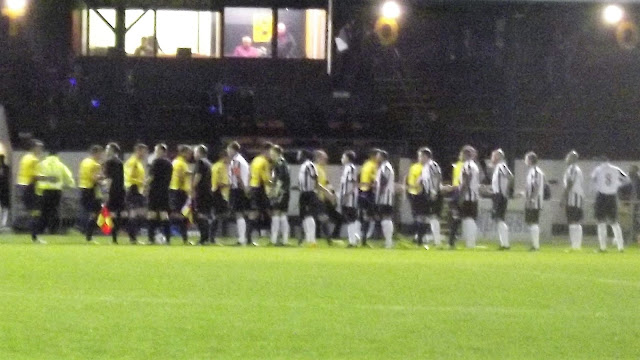 Having completed the Conference South for groundhops, I was in a pretty good mood as I headed back up the M27, M3 and through Basingstoke. Then the roads went to pot. I attempted to get on 2 junctions of the M4 but they were closed with no warning and no diversion. I took a big detour to get to the second one near Bracknell only to have to come back on myself and go via Maidenhead. Just as I thought my problems were over, there was another closure on the A4010 from Wycombe to Aylesbury. After cutting through some of it by taking a narrow country road I stumbled across a Motts coach being escorted through and just followed that. It was possibly the same coach that took the Maidenhead team to the game, it was that late. I finally dropped Anwar off at 12.15, thanks to the disgraceful state of the roads I'd been delayed by 45 minutes. I got home myself 20 minutes later but wasn't really in a mood for sleep until 2am, not ideal when I had to be up 2 hours later. 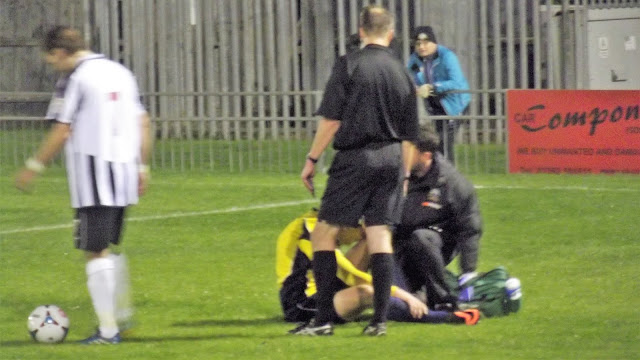 PRIVETT PARK is a smart little ground what has seen recent developments to bring it up to Conference South standard. The original stand is on the side you come in, and is elevated, but has pillars as it's quite an old stand. Opposite is a new modern stand, a pre fabricated one similar to the one at Guiseley. It offers good views and over the 2 stands there is covered seating for over 100 fans. Apart from a small area in front of the bar, the rest of the ground is open flat standing.

The clubhouse is a smart and welcoming venue with your usual range of drinks and the tea bar seems decent. There is a club shop which does a good range of stuff too. My personal recommendation is to use the nearby chippy, which is probably the best I have seen in the south, with a great range of nice stuff. There are also other shops along that parade, including a bookie and a convenience store, as well as a Chinese takeaway. It's conveniently situated 5 minutes walk from the ground. 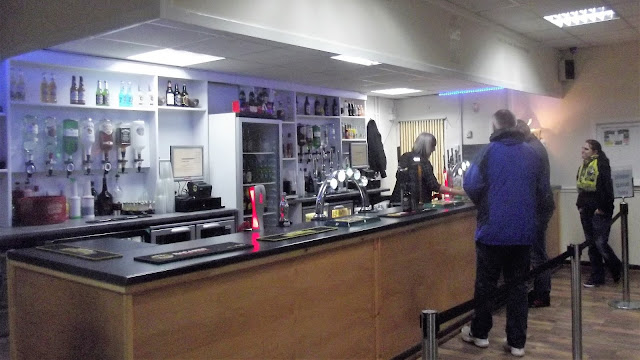 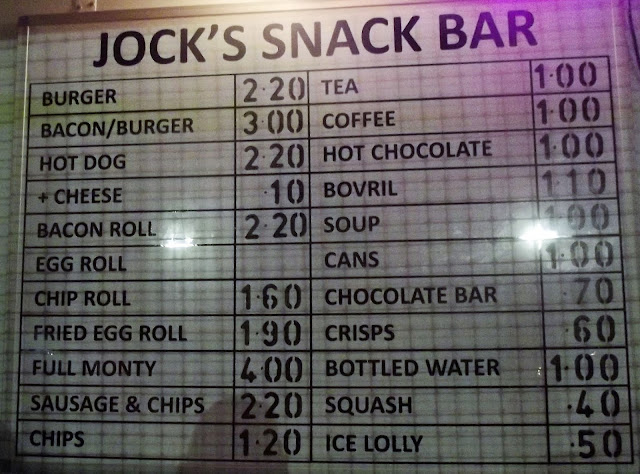 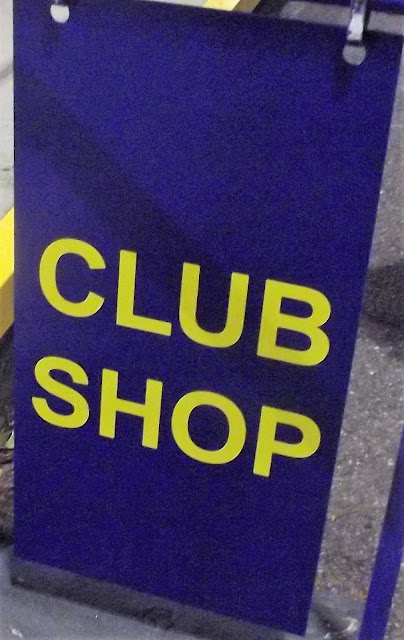 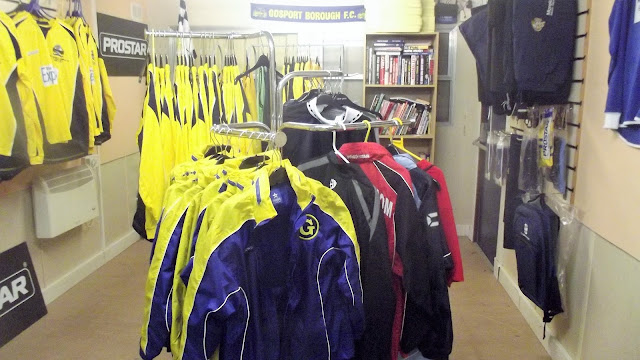 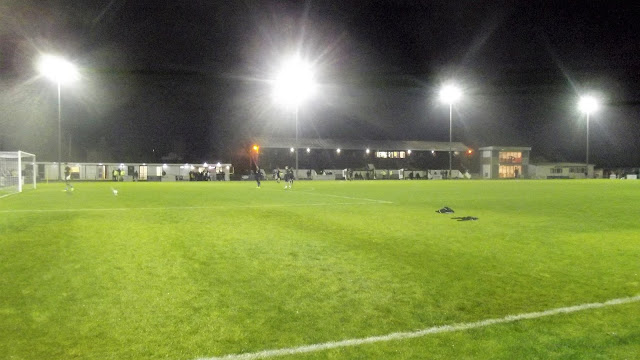 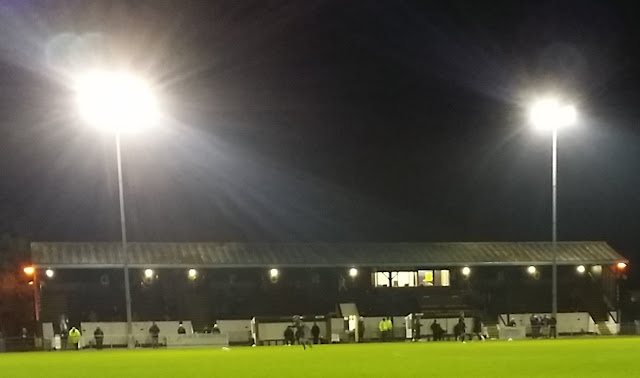 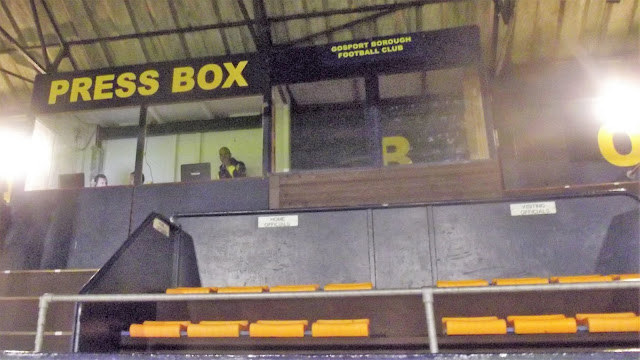 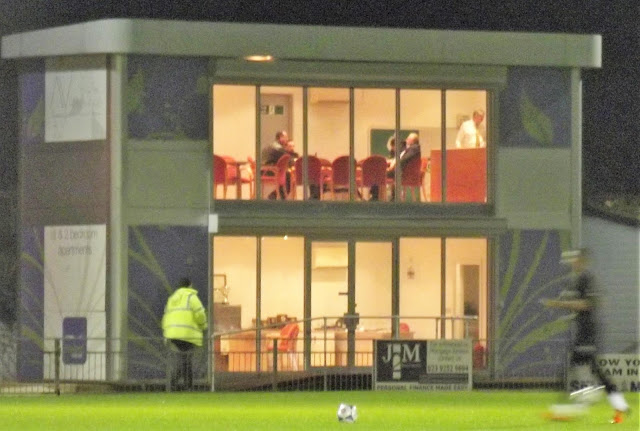 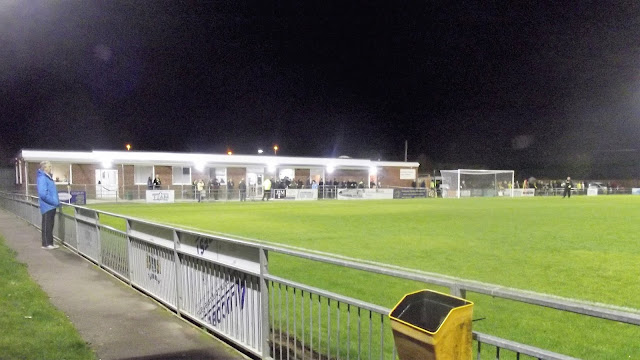 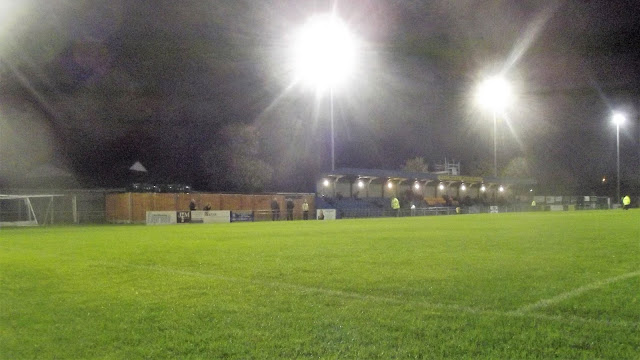 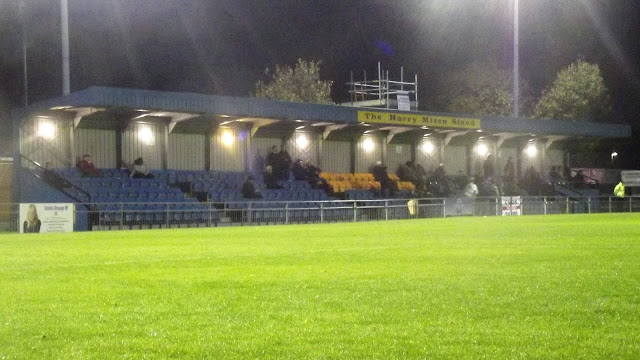 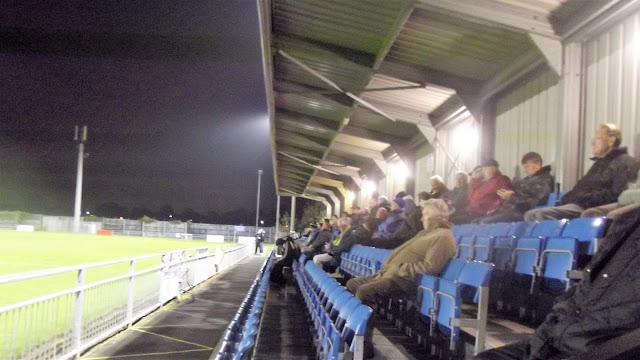 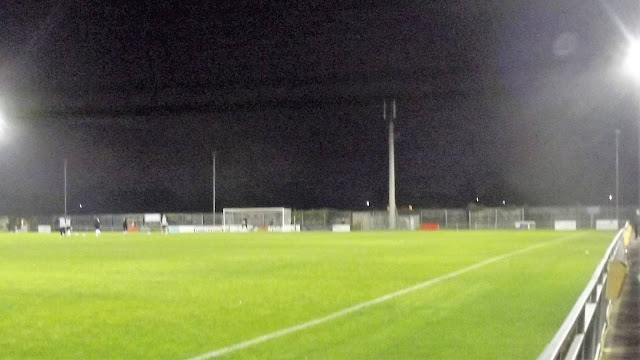