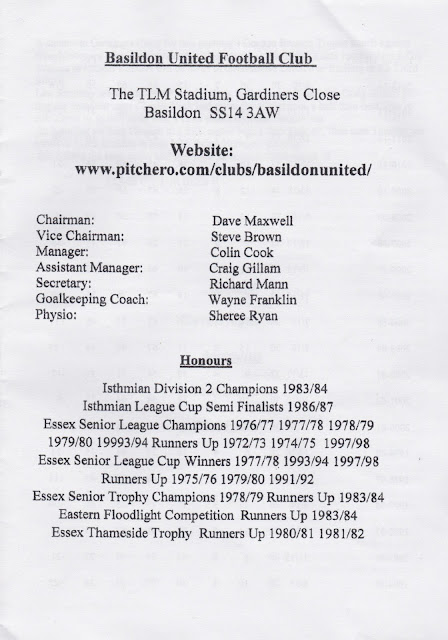 Basildon United FC was formed in 1967 although they did exist as a junior team called Armada FC for 4 years previously. After playing in local leagues for the first few years of their existence, they joined the Essex Senior League in 1971 as founder members. After doing incredibly well, they switched to the Athenian League in 1980, getting promotion to the Isthmian League at the first attempt.  After joining Division 2, they were promoted to Division 1 at the first attempt. However, these heady days could not continue, but they did last for 5 seasons before being relegated back to Division 2. They took the decision to leave and return to the Essex Senior League in 1991. Despite winning the League and Cup double 2 seasons later, they elected not to return to the Isthmian League and have remained a fairly successful team at their current level ever since, though they have been finishing in the lower reaches of the league for a fair few seasons now.

They have reached the 3rd Qualifying Round of the FA Cup on 2 occasions, most recently in the 1998/99 season when they lost 3-0 to St Albans.  They were not a huge hit in the FA Trophy, though they have reached the Quarter Finals of the FA Vase twice, losing to Northamptonshire sides Irthlingborough Diamonds and Raunds Town on each occasion. The club has an excellent tradition of having players to go on to play in the Football League. Ken Charlery, Johnathan Gould, Michael Kightly and Steve Tilson are just some of the names that have progressed. Ex Chelsea man Kerry Dixon also played for the club at the end of his career. The clubs record attendance at the ground came at it's opening in 1970 - Geoff Hurst and Jimmy Greaves were just 2 of the 4000 fans present that day. Last time I had seen them they had beaten Hullbridge Sports 2-1 in a game that I went to with fellow hopper Laurence. This was a game in the Essex Senior League's cup competition, but at start of play, they were just below mid-table in 13th. 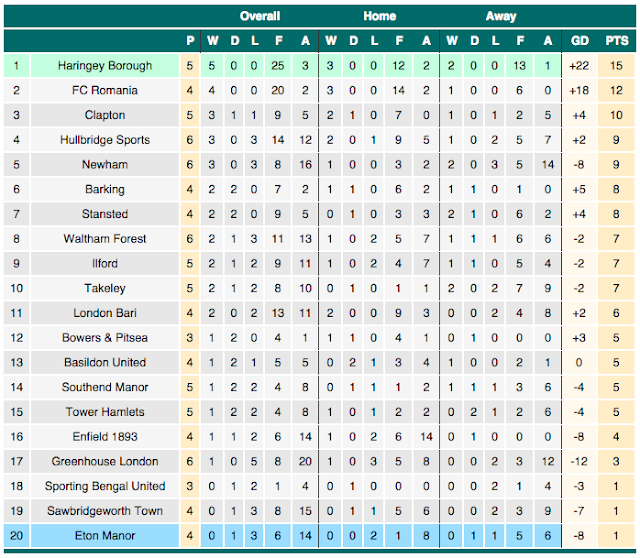 Originally on this day, I was planning 2 games. First off would have been Mansfield Town U21 v Evesham United U21, played at Rainworth Miners Welfare. This was until I looked at about 3am the night before and found that the game had been postponed, for unspecified reasons. At least it had saved me a wasted journey, but it also meant I missed out on another Northern trip. Wycombe had only recently played Mansfield Town on Saturday, happily, we won 3-1 to lift us up to 4th in the league. We were a bit lucky as Mansfield shaded the game and it was certainly not as good as we could have played. The standard of football was not great, to be honest - both teams resorted to a physical, direct style of play, but at the end of the day, we got the 3 points, which is all that will count when it comes down to the end of the season. We, of course, owe Mansfield a massive debt of gratitude for being there in the first place - it was only due to their victory at Bristol Rovers that we were in the football league in the first place - a week before we looked dead and buried, but some final day heroics really saved our bacon. I'd had quite a late night before, not getting to sleep till 4.30, so I woke up, just after 10. I had breakfast, had a bath and as my day's plans had been thrown into disarray by the postponement of my afternoon game, I had to decide where to go. It was quite slim pickings and I did think of doing one in London and going to see a film about Swansea City in the afternoon. It was only being shown in Swansea and at Odeon Leicester Square and I really wanted to see it, but in the end, I opted to spend the first part of the day relaxing at home and set off later in the day.

I knew Basildon was not bad for shopping, so I opted to go to their game against Eton Manor in the Gordon Brasted Memorial Trophy. I set off at 3, arriving in Basildon at 4.20. After a fruitless look around the shops apart from a £1 taco at Taco Bell, I set off for the ground. Basildon is one of the few places that offers this excellent fast-food establishment, despite it being huge in America. From there I made my way to the ground. With nearly 2 hours to kill till kick-off, I decided to look for food. I typed 'curry' into Google Maps and it came up with a place 15 minutes away called 'Basil Spice'. When I got there it looked quite pricey as it was very nicely decorated. I checked that they took card as I only had a tenner in change and they did. It was nice actually. I always like to try new curries and on this occasion, I did, having a lamb chop Kon Kani. Also on included were a generous portion of rice, poppadoms and dips and a couple of pints of Magners. It came to just under £23 which was my most expensive meal of the season, but not outrageous for what I had. I decided not to add it to my football expenses for the season. 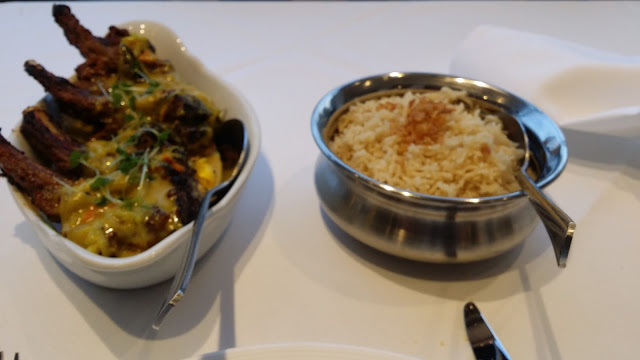 From there, I walked back to the ground, getting there at 7.25. I'd been having a good chat to my friend and fellow groundhopper Kieran along the way, and it was nice to have a catch up as we had not spoken in ages. That helped kill the time before the game, as well as typing my blog. I paid £7 for entry and a very basic photocopied programme and made my way I to the ground. Eton Manor dominated early proceedings and took the lead in the first couple of minutes. It looked like it could be a good game, but it turned out not to be the case. It's often said on groundhopping forums that the Essex Senior League is of a poor standard, and on this evidence, that's hard to argue with. It was a very dull game, that the struggling Eton Manor won 2-1 and to be honest they were good value for their win without breaking a sweat. It was a simple drive home, save for a slow bit through the roadworks on the M25. I made good time, taking little over an hour to get home, getting in at 22.45. I had a cider while I typed my blog, then watched TV before going to sleep.


GARDINERS CLOSE is one of the bigger step 5 grounds. All the covered accommodation is on one side with 2 standing areas holding around 400. Then a sated area for around 150. The rest of the ground is open standing, with some steps of terracing on the far side. Though the stands look good in club colours, the rest of the ground is a bit scruffy, with overgrown grass everywhere. Part of the ground is fenced off too, which gives it a bit of an unloved feeling.

The tea bar does hot drinks and a BBQ style operation. The bar is not bad and has old photos on the wall. There was no club shop that I could see. If you want a sit-down meal, there is a curry house 15 minutes from the ground, and also a takeaway next door if you are on a budget. 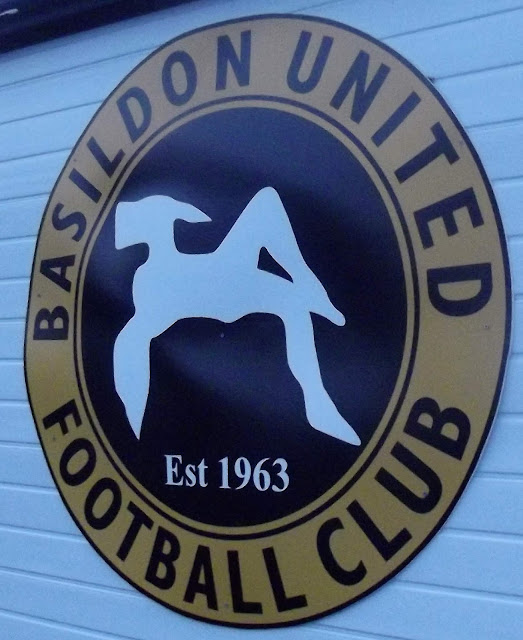 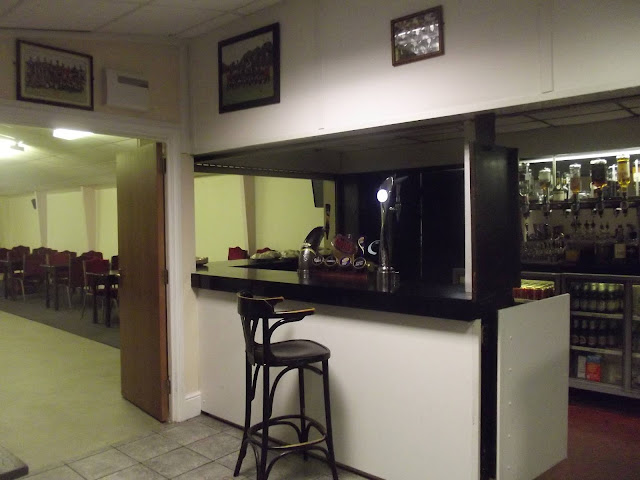 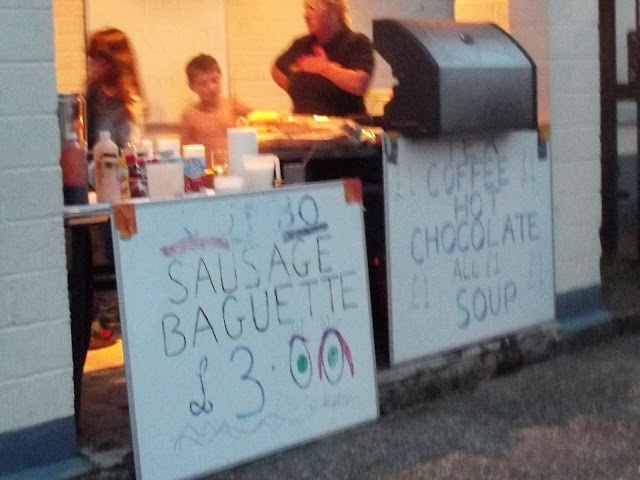 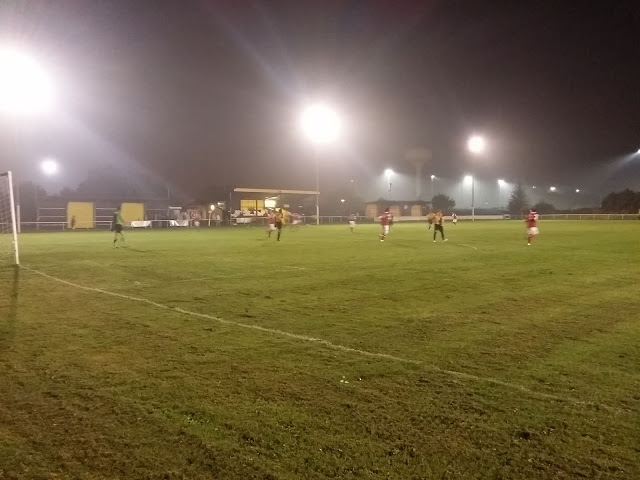 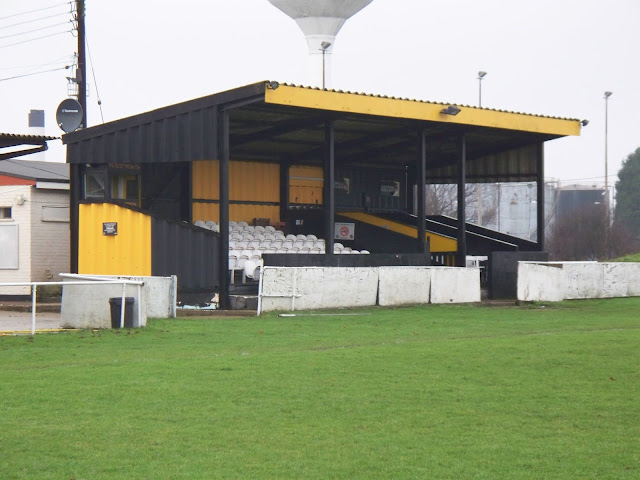 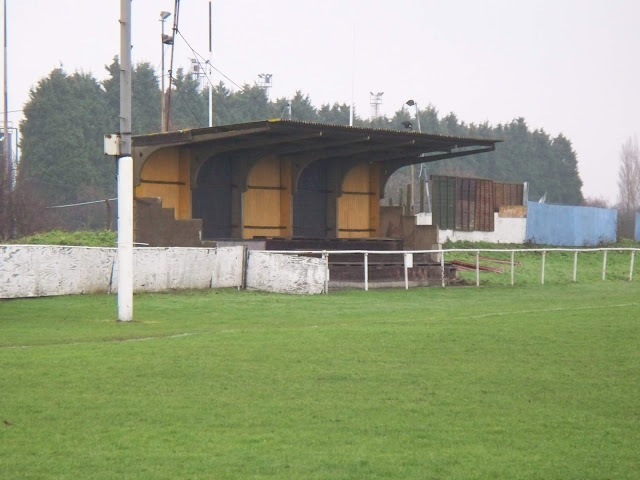 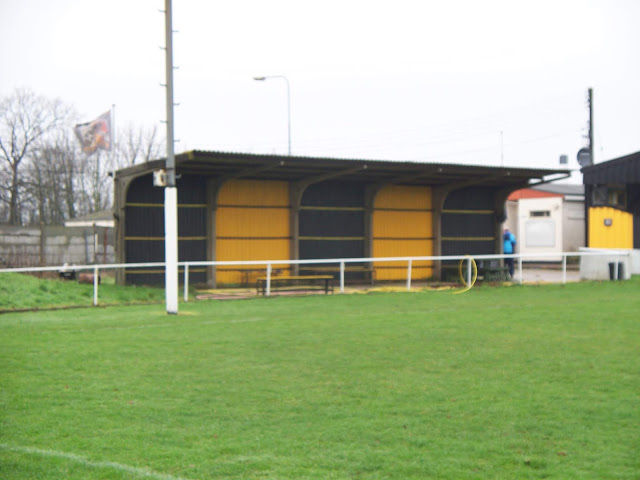 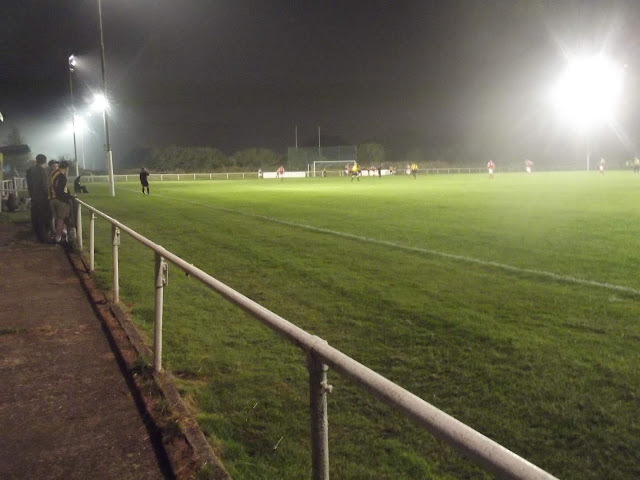 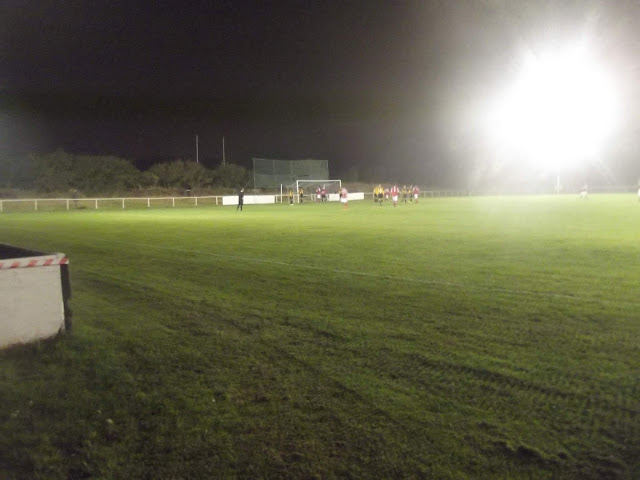 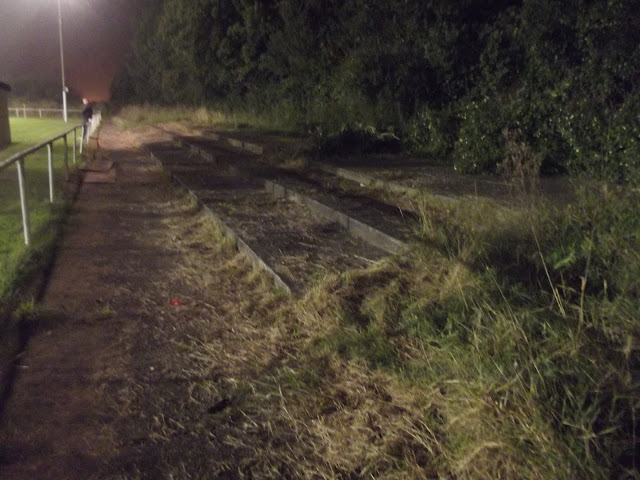 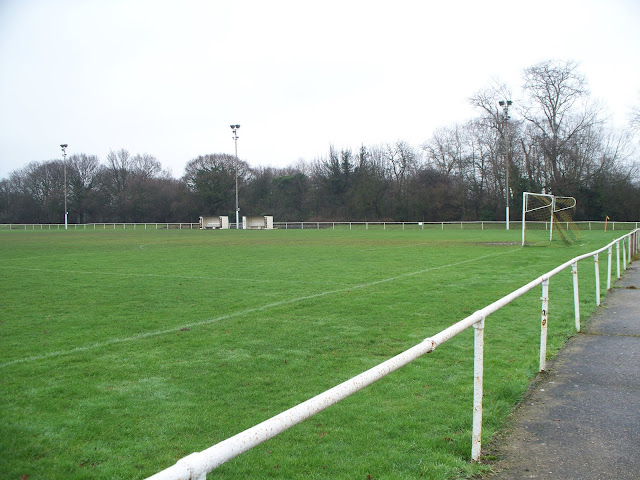