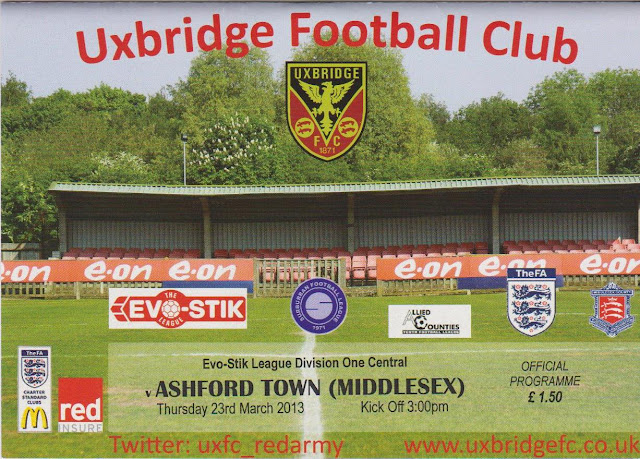 The club was formed in 1871, making them one of the oldest clubs in Southern England, although they have folded and reformed a couple of times. They started out playing only friendly games but became founding members of the Southern League Division 2 in 1894. Despite four consecutive 4th place finishes in their first 5 seasons, they left the league in 1899. After over 80 years, following spells in the Middlesex, Corinthian and Athenian Leagues, Uxbridge joined the Isthmian League in 1982. Starting out in its third tier, a runners-up spot in Division 2 South behind Grays Athletic in 1985, was good enough for a promotion. They've remained at the same level ever since, with the record finish being 5th in Isthmian Division 1 in 1998, at the time, a step 3 league. The establishment of the Conference North & South in 2004 saw them effectively drop down a level, though the same year saw them relocate to the Southern Division 1 East. They've remained here to this day, albeit with a couple of switches due to geography. Uxbridge came closest to returning to step 3 in 2012, finishing 4th but losing out to Bedworth United in the playoff semi-finals. Recent seasons have generally seen bottom-half finishes, with the club sitting in 14th place prior to tonight's game. 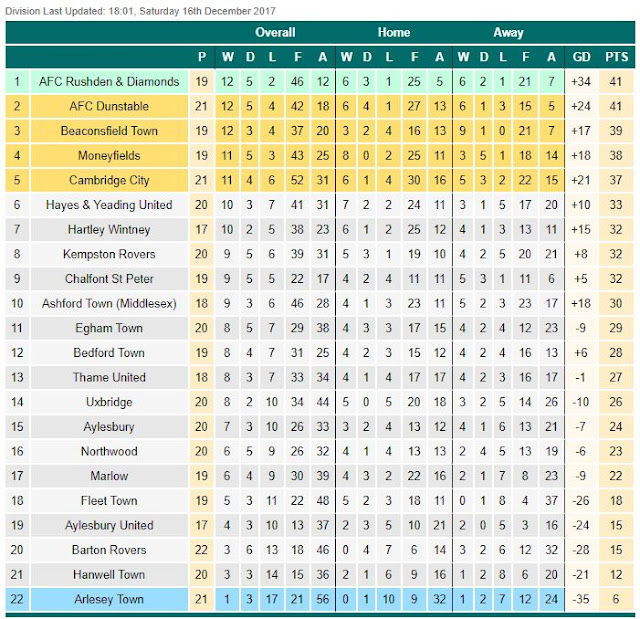 In the FA Cup, the best run came way back in 1873, with a 2nd Round exit to Royal Engineers. In modern times, their best run has been the 3rd Qualifying Round, the last occasion being in 2000 with a 5-1 defeat at local rivals Northwood. The FA Amateur Cup final was reached in 1898, but Uxbridge lost 2-0 to Middlesbrough in a game played at Crystal Palace. In its replacements, the club has reached the 2nd Round of the FA Trophy a number of times and the 4th Round of the FA Vase in 1984, losing 2-0 to Irthlingborough Diamonds. 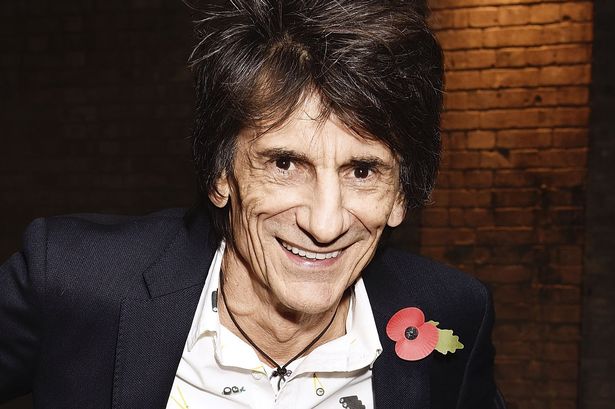 Local cup honours include the Middlesex Senior Cup on four occasions, the London Challenge Cup three times, the Middlesex Charity Cup six times and the Corinthian League Memorial Shield in 1951. Well known player to have turned out for Uxbridge include Nickie Kabamba, Neville Roach & Jermaine Beckford. Notable people to come from West Drayton where the club are based include Rolling Stones guitarist Ronnie Wood who started his musical career in 1957 - playing washboard for the Original London Skiffle Group at the Regal Cinema in Uxbridge. 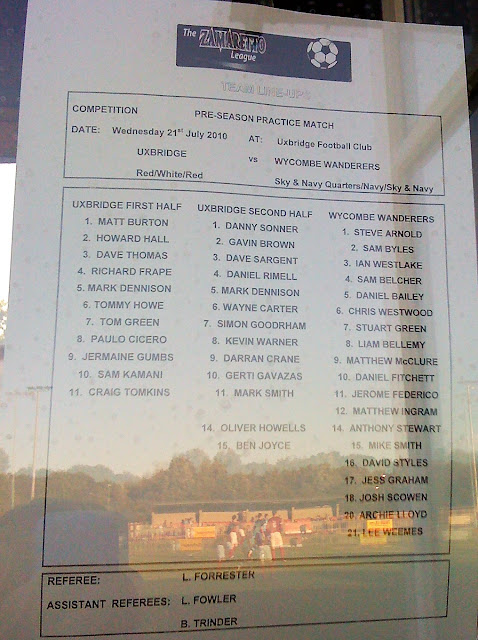 I had already been to Uxbridge to take photos of the ground a few years previous, but seeing as it was a fairly local game to me, I decided to go down for Wycombe's pre-season friendly there in July 2010. Wycombe had played the previous night at Brentford and were also playing the following night at Ware, so this was the middle part of a 3 game marathon for me. Tonight it was the turn of the reserves - the fringe first team players and the more senior youth teamers to try and impress Manager Gary Waddock ahead of the new season in League 2. It was an excellent game with Wycombe running out 6-3 winners in an entertaining encounter. The game featured a number of trialists for the Wycombe side...

SAM BYLES: Ex-Arsenal defender who went on to play for Team Solent.

DANIEL BAILEY: Ex-QPR defender who went on to play for Holyport and Hungerford Town.

LIAM BELLAMY: Midfielder who went on to play for Aldershot, Dover & Ebbsfleet.

Sam Kamani put the home side in front on 18 minutes when he slotted past Steve Arnold but Wycombe were level on 27 minutes later when Stuart Green converted a penalty after Dan Fitchett had been fouled. Youth team trialist Daniel Bailey then gave Wanderers the lead ten minutes into the second half after Uxbridge had failed to deal with a corner. McClure opened his account on 66 minutes as he rounded the home 'keeper following a pass from Sam Belcher. McClure made it 4-1 on 77 minutes with a lob before Uxbridge pulled one back a minute later through Kevin Warner with looping volley. McClure completed his hat-trick on 84 minutes when he nipped in to score from the byeline from Stuart Green's pass. Darran Crane headed home from close range a couple of minutes later to make it 5-3 but McClure had the final say when scored his fourth following a through-ball from Ian Westlake on 89 minutes. 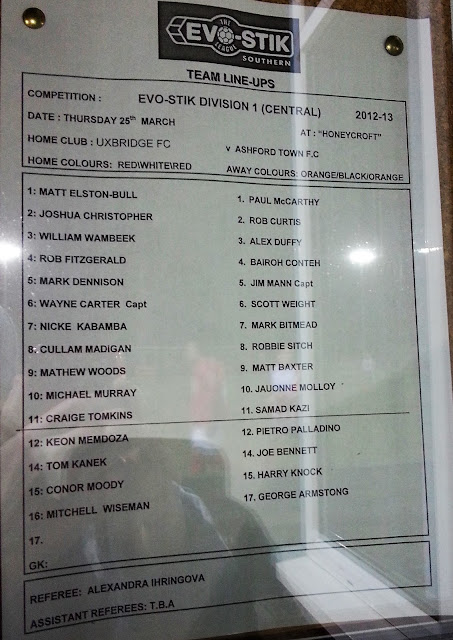 My second visit to Honeycroft came on Thursday 28th March 2013. The club seemed a bit confused about the date, with the programme saying 23rd March and the teamsheet having the date as the 25th, but luckily I was keeping records by then. In any case, I wanted to revisit, as I didn't have a programme or teamsheet from my first visit. The game was being played on a Thursday night due to the usual end of season fixture pile up. I'd arranged to meet Hayes & Yeading supporter Corey there as he lived just around the corner. We witnessed an entertaining contest - Matt Baxter gave the visitors the lead on 24 minutes before Michael Murray equalised for Uxbridge five minutes later. Former Wycombe youth player Pietro Palladino looked to have scored the winner nine minutes from time for Ashford but current Portsmouth striker Nickie Kabamba equalised for the hosts on 88 minutes. 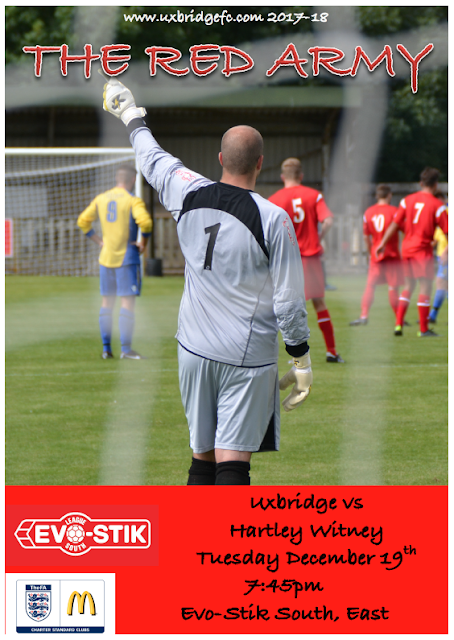 I was on my own on this Tuesday, what with fellow hopper Anwar off to watch his beloved Arsenal play West Ham. Therefore, I wanted to stay as close to home as possible to save money. My initial thought was a revisit to Uxbridge, a ground that I hadn't been to since 2012 and one that I wanted to update my blog on. But then I saw that Kings Langley were at home to Watford in the Hertfordshire Cup. After I'd had a great away day on their coach to Tiverton a few weeks back, I wanted to revisit Kings Langley and update my blog. The only thing that put me off was the £11 admission, one of the pricier ones at step 3. However, I saw a tweet that said they were doing entry for a fiver. So, unable to decide, I put up a Twitter poll to end Tuesday lunchtime and decided to go with the result to choose what game I'd be going to that evening. Despite Kings Langley taking an early lead, Uxbridge won out in the end by a decent margin, so that was where I'd be spending my Tuesday evening, weather permitting. 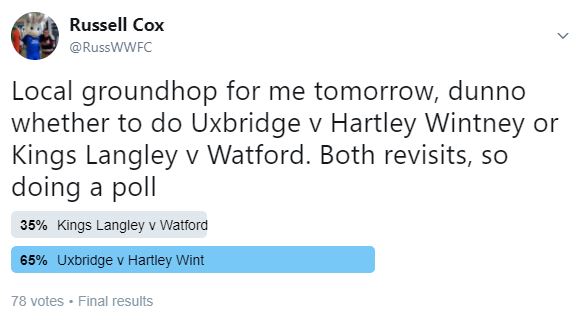 On the day of the game, it was my day off work, as per usual for a Tuesday. I'd had a pretty decent night's sleep, waking at 9 am. After getting dressed and ready, I went up the local Rebellion Brewery with my Dad and bought myself a couple of bottles of cider for Christmas. After stopping in Wycombe and getting a few other things, I came home and had lunch. The afternoon was spent doing the last of my Christmas shopping online, plus recalling my previous visits to Uxbridge FC and the club history for my blog. Handily, the programme was available online for free, so I had a look through it, noting that as on my previous visit, it was a pretty decent effort. After a dinner of lamb curry and doing some work on my Coventry City blog for Friday, I got my things together and left at 6.50. It was a good journey over, with me getting to the ground at 7.30. Near the ground, there was a big crash between a car and a lorry. Thankfully the people looked OK, but I made my way gingerly through the bits of smashed plastic, hoping not to get a puncture. This was something I double checked at half-time, but thankfully there were none. I caught up online before going in, paying £8 for entry and finding a place on the halfway line. 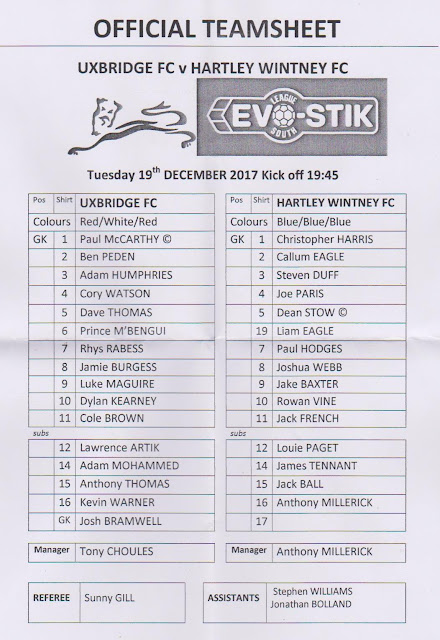 The game started very brightly with Uxbridge forcing the visiting keeper to tip a shot onto the bar in the opening few minutes. Hartley Wintney then hit the post from a free kick in what was a very open start. The hosts took the lead on 7 minutes thanks to a close-range Prince M’Bengui header from a few yards out after an excellent cross was whipped in from the right. It was all square ten minutes later, a low drilled shot from 20 yards allowing Paul Hodges to equalise for Hartley Wintney. The most notable incident of the remainder of the second half was a booking for a heavy challenge by visiting player Joe Paris, but both sides came close to scoring. They had another player booked on 52 minutes, a substitute. The Uxbridge fans called for a sending off, but referee Sunny Gill, who had a good game, made the right call. A surfing run down the left provided a cross for Dylan Kearney who tapped home from a few yards out to restore the hosts lead. Just after the hour, Uxbridge keeper Paul McCarthy made a great low save to prevent the equaliser, but he couldn’t prevent James Tennent heading home a cross on 66 minutes to make it 2-2. The visitors finished the game the strongest, but in the end, a draw was a fair result overall. 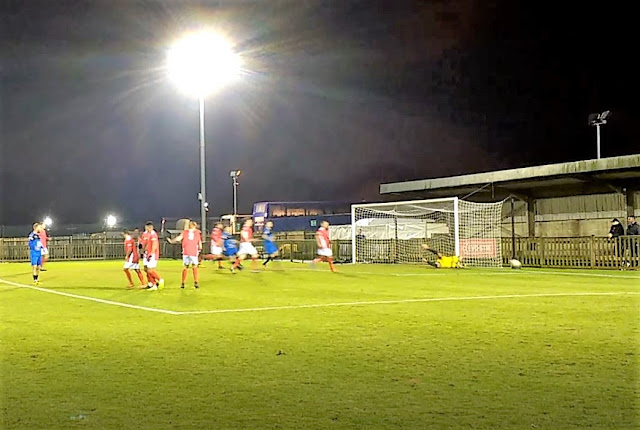 The game had been a really good contest in a good atmosphere and it was a shame that there had only been 84 there to watch it. Or 87 if you count the three birds that were for sale in the clubhouse, that’s a first for me in all my years of football. The tannoy man had been helpful in identifying the scorers and as we left he wished everyone a Merry Christmas and a happy, healthy and Brexit-free new year. I left just before 9.40, listening to the League Cup Quarter Final between Leicester City and Manchester City on TalkSPORT. It was a good journey home and I got in at 10.10, with the game still in progress. I got to watch the penalty shoot out, which was in that daft ‘ABBA’ format. Manchester City eventually prevailed, Mahrez and Vardy missing, the latter no doubt getting in some practice for the inevitable England failure at next summer’s World Cup. After that, I watched Dave Gorman’s Modern Life is Goodish before going to sleep at 11.30. 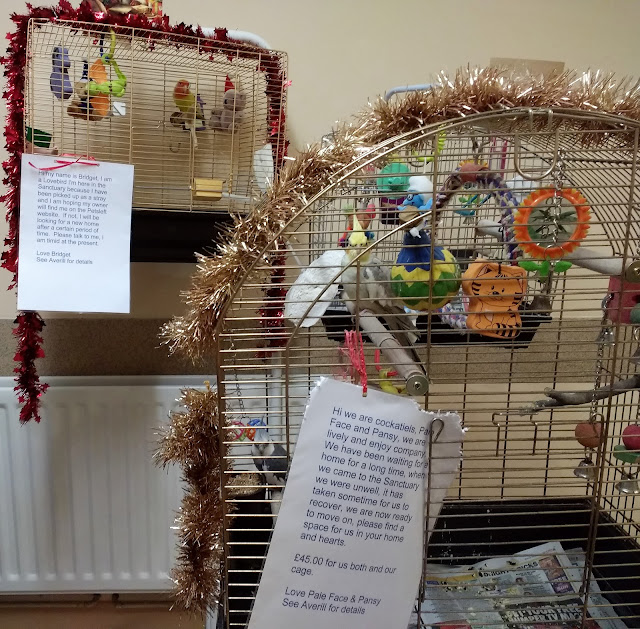 HONEYCROFT is a smart fairly modern ground situated at the end of an industrial estate on the outskirts of nearby West Drayton. All 4 sides have small areas of cover on them. The 2 ends are identical covered terracing, whilst the 2 sides are seated areas, with the side nearest the main entrance to the ground housing the tannoy area and having the clubhouse behind it. There is no club shop to my knowledge, which is a shame.

Food and drink wise, I can't remember seeing anything on the way in, so the ground is the only option unless you stop en route. I've not used the bar on any of my visits, but the tea bar seemed to have a decent selection at reasonable prices.
SCORES ON THE DOORS

1: Ground facilities & condition (for the level)
A tidy and decent ground for step 4 (7)

2: Area around the ground (parking, food/drink, public transport)
A bit out of the way, a mile walk from West Drayton station and town. Parking plentiful (4)

3: Welcome / Club Friendliness
Decent on all my visits (7)

5: Social Media & Website
Both are well kept and regularly updated (8)

6: Programme
Good efforts on my latter two visits, online only for my third visit (8) 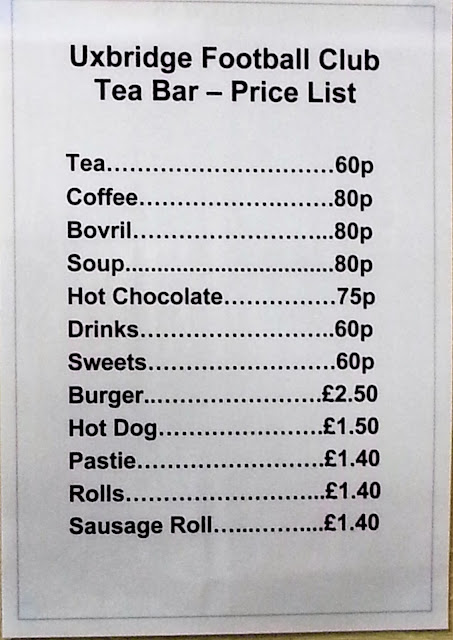 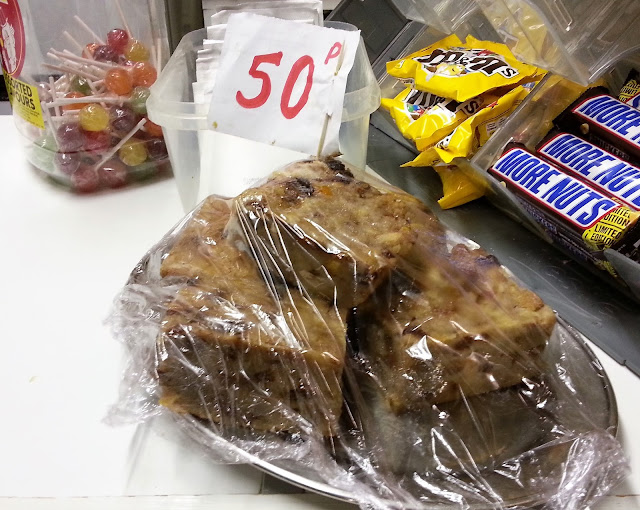 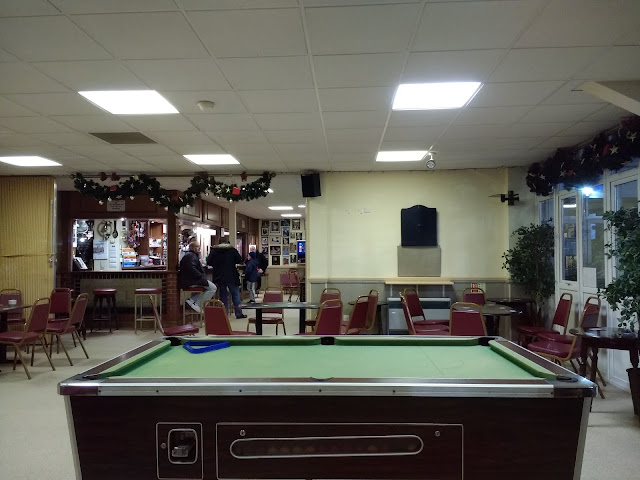 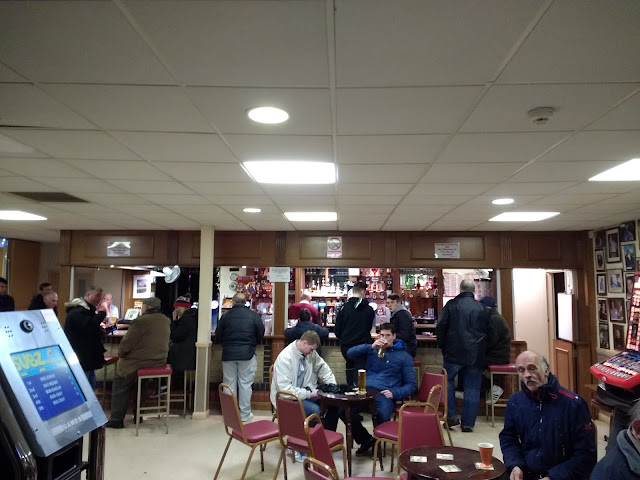 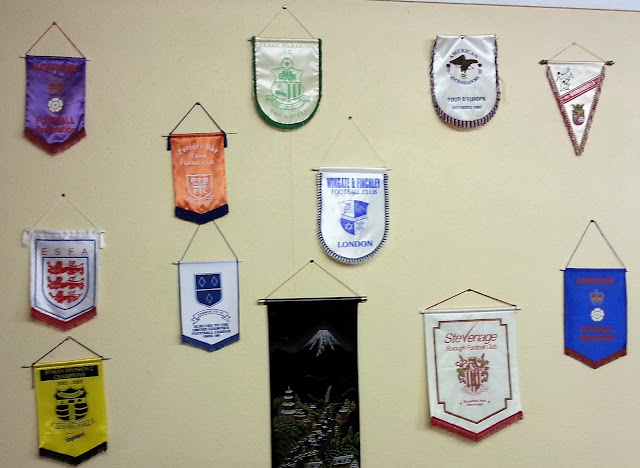 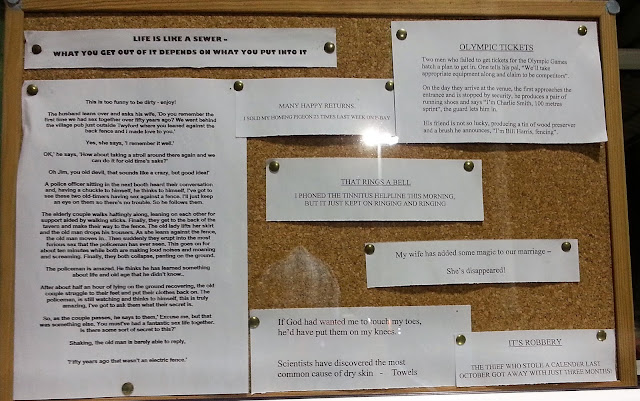 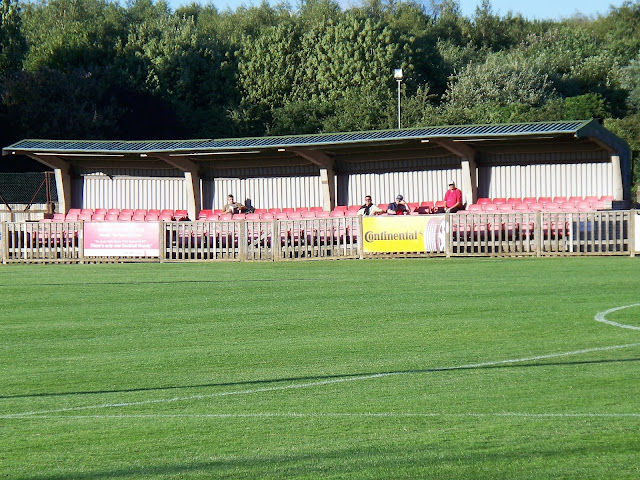 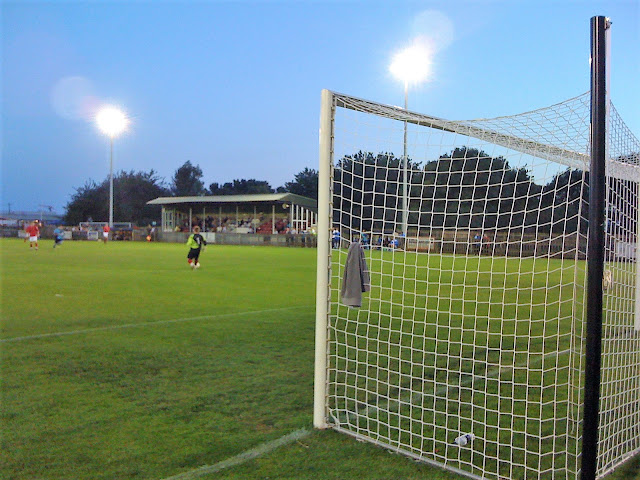 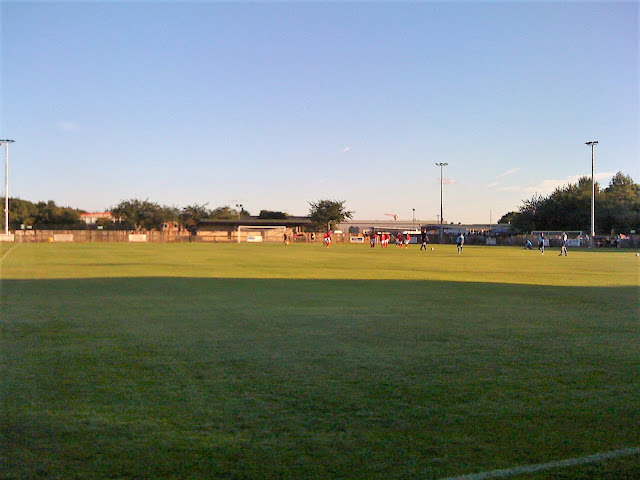 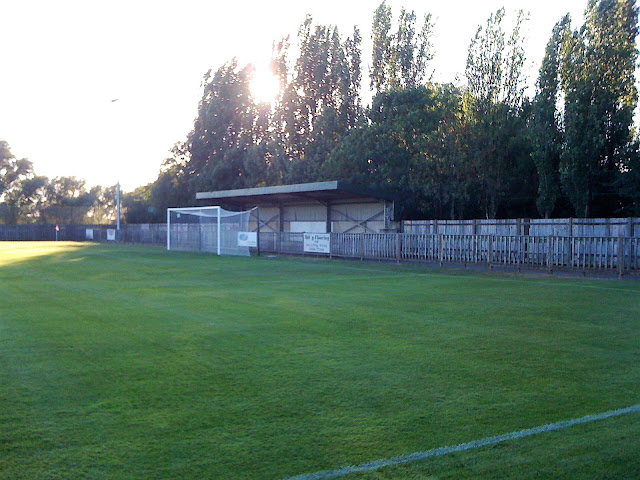 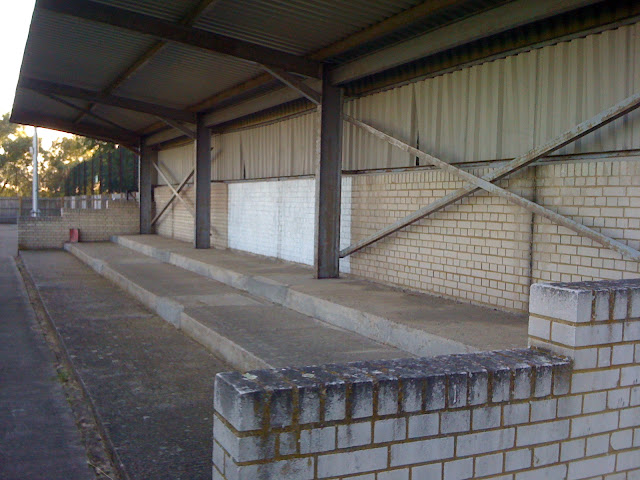 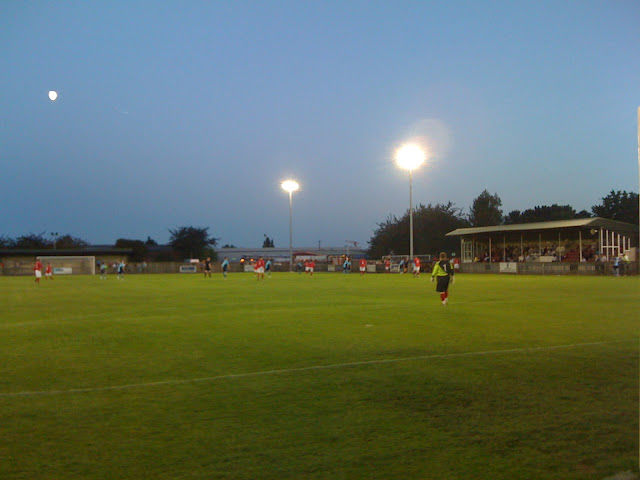