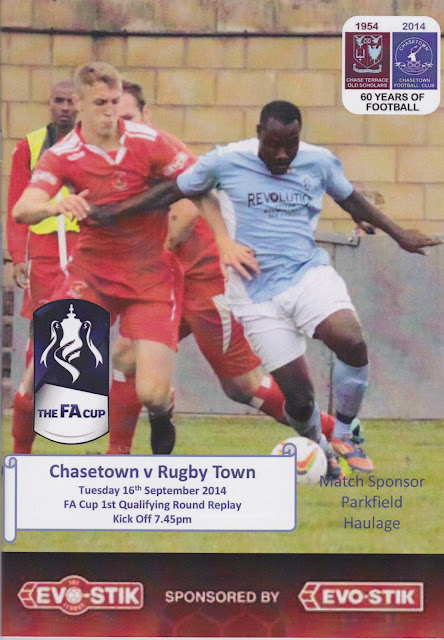 Chasetown FC was formed in 1954 under the name of Chase Terrace Old Scholars Youth Club. Initially a youth team, they played in Junior Leagues. They joined the West Midlands League in 1972, and after making their way through its 2 divisions, switched to the Midlands Alliance. They won that league in 2006, thus winning them promotion to step 4. Initially winning promotion to the Southern League, they switched to the NPL in 2009. Promotion from the Division 1 South in their first season meant that they gained promotion to the Premier. A solid first season saw them finish 10th, which is their best ever placing, league wise. The following season, however, they finished 20th and were relegated back to Division 1 South. In their first season back, they reached the playoffs, but lost 2-1 to Stamford in the final, in a match that I went to.

The club is most famous however for their FA Cup runs in the mid-2000's. Their best effort came in the 2007-08 season when they started in the Preliminary Round, beat local rivals Port Vale in Round 2, before facing Cardiff City in the 3rd Round. They took the lead, and held it until shortly before halftime, but ended up losing 3-1. As a consequence, they were invited to be Cardiff's first opponents in a friendly at their new stadium, a game which was watched by 5000 people as the Welsh side won 4-0. In the FA Trophy, they made the Quarter Final in 2011 before going out to Mansfield after a replay, whilst in the FA Vase, they made the 5th Round in 2000. Irish comedian Frank Carson was once a director at the club, while the most recognisable player to me in their team was goalkeeper Ryan Price who played for Stafford Rangers against Wycombe in the Conference, which is over 20 years ago now.

I was originally supposed to be staying up North in a hotel this week, as it was my week off. But I was concentrating on the eastern side of the country this time, and all the Monday night games were on the Western side. Added to that, the previous Friday's trip to Cefn Druids had been done on my own and therefore was a lot more expensive than usual. So when Anwar said he would be up for an FA Cup replay, I gave him a list of the ones I fancied, and he picked Chasetown, luckily that was my top choice, as I knew it had a club shop and was close to town too. 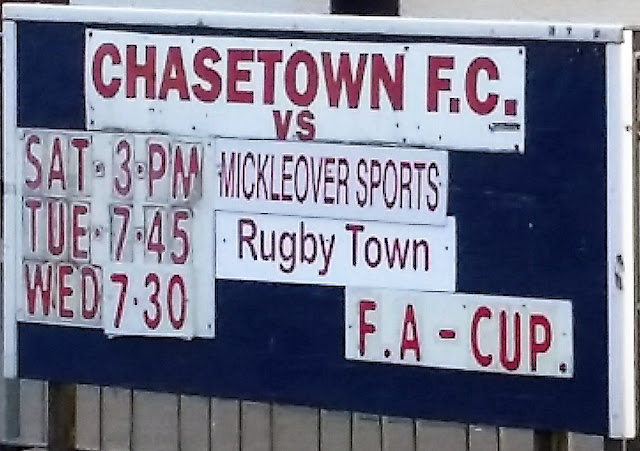 I was on my week off,  so I spent the morning at home, first of all typing my blog,  while waiting for the post to come. When it did,  I was pleased to see that my Android TV box had arrived, so I fiddled around with it before it was time to leave. When all set up, I should be able to watch any film ever made or any football game in the top leagues, all for free, via online streaming. I left home at 12.45 and met Anwar at the school where he worked at 1.20. We put the retro games shop in Sutton Coldfield as our destination but realised we'd be there far too early. Anwar mentioned a stall on Milton Keynes market, which was pretty much on the way, that also did retro games, so we decided to go there on the way. It turned out to be quite good, but there was nothing there that I fancied. Even so,  I got my lunch there - curry sauce and chips, and it was nice and great value at £1.50. From there we went to Sutton Coldfield. There was a bit of a delay on the M1, but nothing too serious, and we arrived at 4.50. It was a good job we had stopped at Milton Keynes, as the retro shop had closed down, and we would have had loads of time to kill. 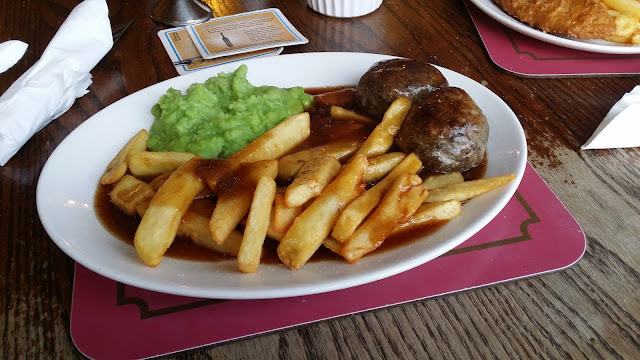 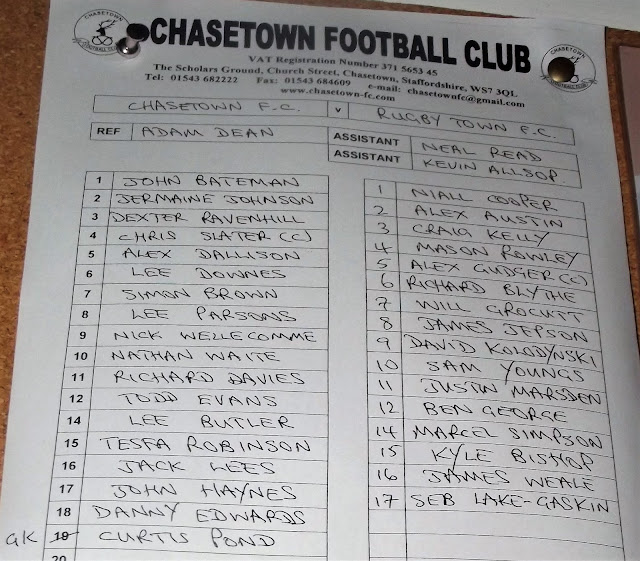 We got to Chasetown at 6.15 and instead of parking in the ground, we went and parked up in a side road nearer town. We made our way to a pub that I had researched on the Internet. It was supposed to do real cider, which it did. But no new ones for me, I had to settle for some Thatchers Green Goblin, which at least I had not had for a for a few years. I had even more luck on the food front. I'd wanted to try proper faggots for ages and they were a proper delicacy round here. They were really nice too, and in conjunction with Anwar's fish and chips, we got 2 meals for a tenner. Fully fed, we made our way back to the ground. I paid £8 entry and £2 for a nice thick programme. I had a look round the ground and took some pictures. I was looking for the clubshop, but it was not open. Everyone was nice and friendly, and despite the disappointment of this, it was a good night. I got myself a pint from the bar, as I was allowed to have a drink watching the game. The plastic glass would also serve a purpose on the way home - it was the ideal size to fill with Irn Bru and put in my car's cup holder to keep me hydrated. The tannoy man was also good at reading out the teams and making announcements and played a good selection of pre-match tunes.

Rugby bossed the first half and took the lead as early as the first minute. David Kolodynski got onto the end of a long ball and fired home left-footed from around the edge of the area. But Chasetown did have the occasional attack and indeed had a penalty, but that was smashed against the bar by Simon Brown. They did equalise right on the stroke of half-time however when Nathan Waite finished past the keeper from inside the area. The second half bought no further goals, but that period saw Chasetown dominate. Extra time it was, and I was hoping for the drama of penalties but it was not to be. Kolodynski was again the difference scored another 2 quality goals, and it's a mystery to me how no one else has snapped him up. In any case, his side will face a trip to Conference North side Worcester City in the next round.

Wycombe gained a great 1-0 win at Plymouth, whilst Liverpool got a last-minute penalty winner against Ludogorets in the Champions League. In the FA Cup, the most entertaining game appeared to be Metstham's 4-3 victory at Chipstead in the clash between the 2 Ryman Division 1 South sides. It was a fairly simple drive home, with minimal delays. I dropped Anwar off at 12.10 in Aylesbury and then got home myself at 12.35. With no rush to get to bed, I did some more work on my blog.

THE SCHOLARS GROUND is a venue that has seen much change over the past 10 years. The one original stand held around 150 and has all the facilities like bar and dressing rooms at the back of it. The rest of the accommodation is made up of prefab stands. There is a metal covered terrace to your left, as well as some uncovered blue seats to the side of it. At the other end are some covered seats that look like the old stand at Barnet's former home of Underhill.

The club shop was not open on my visit and I did not use the tea bar, so I can't say much about those. But the bar was nice enough for a pint. The people were friendly too, and there was a nice local pub called 'The Uxbridge Arms' which did very nice food and a wide selection of drinks. 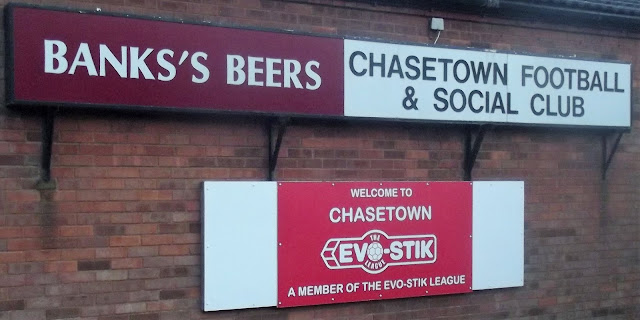 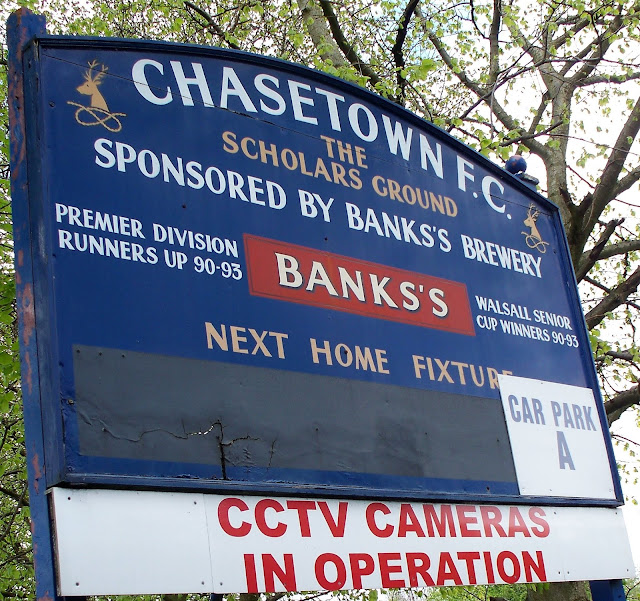 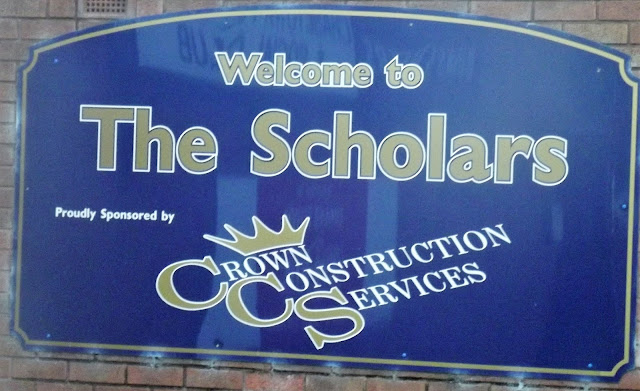 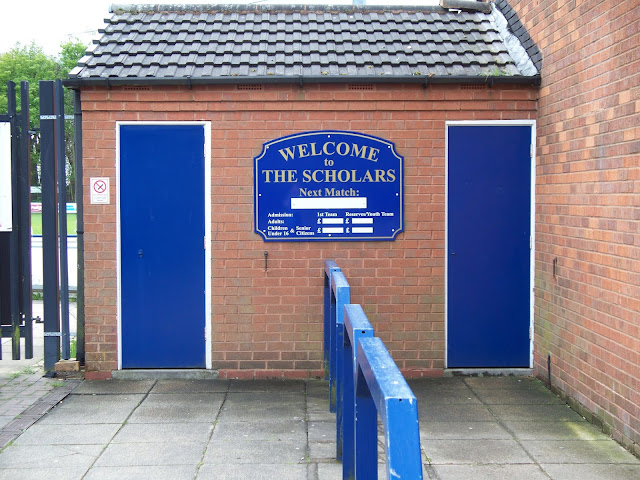 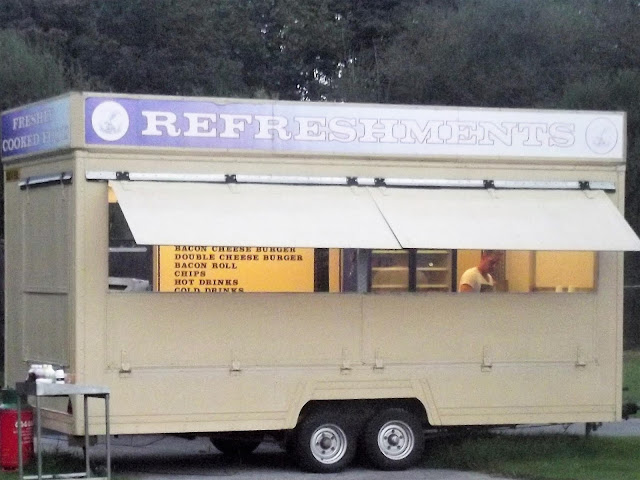 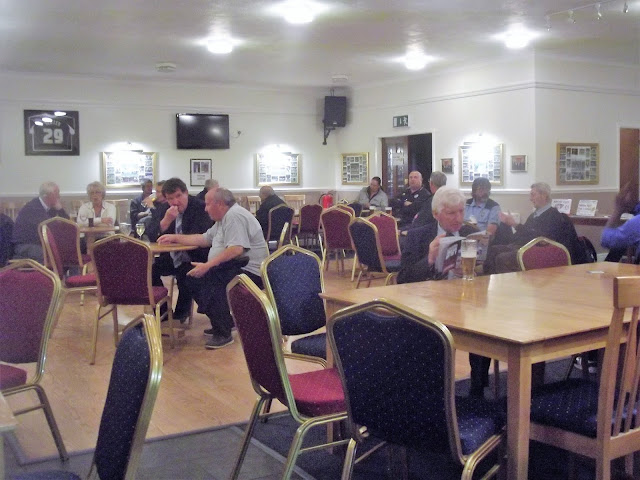 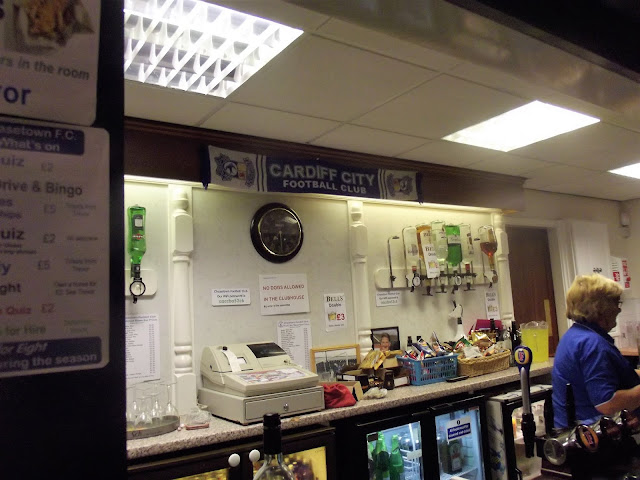 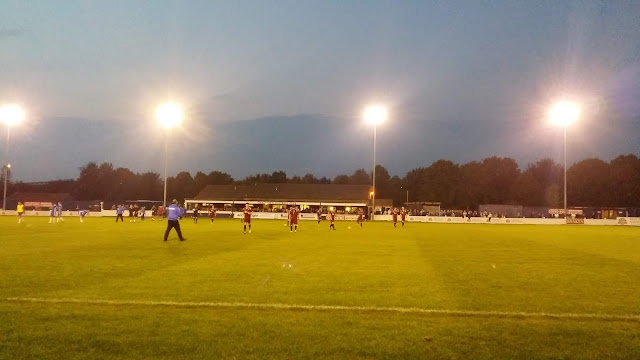 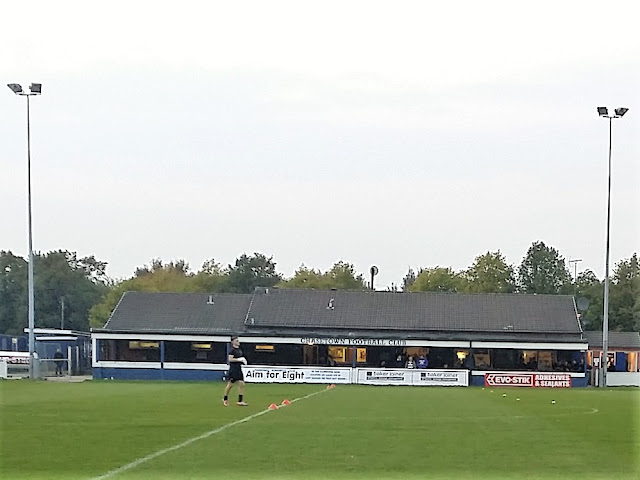 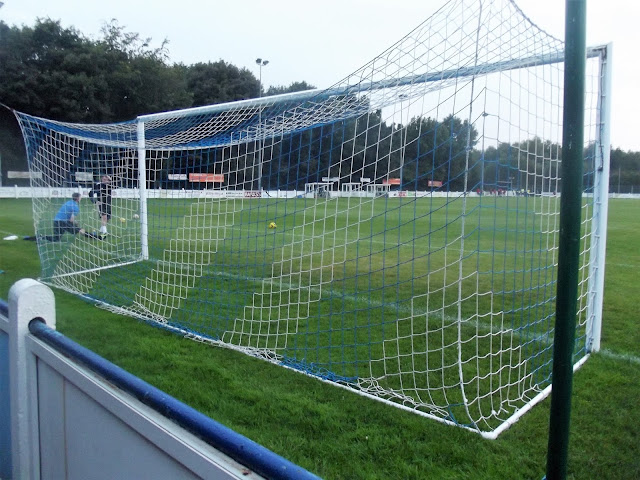 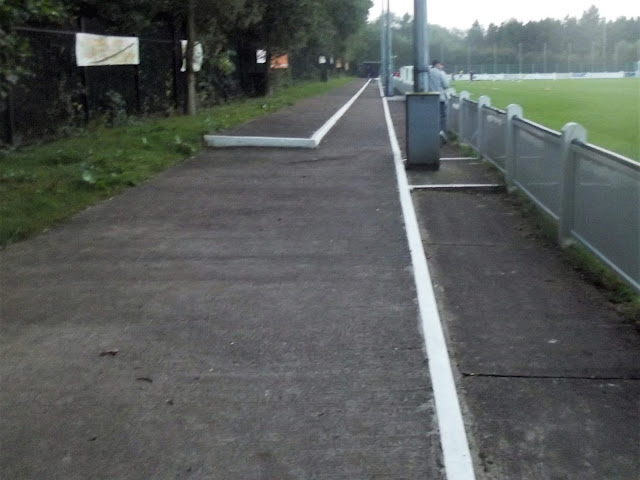 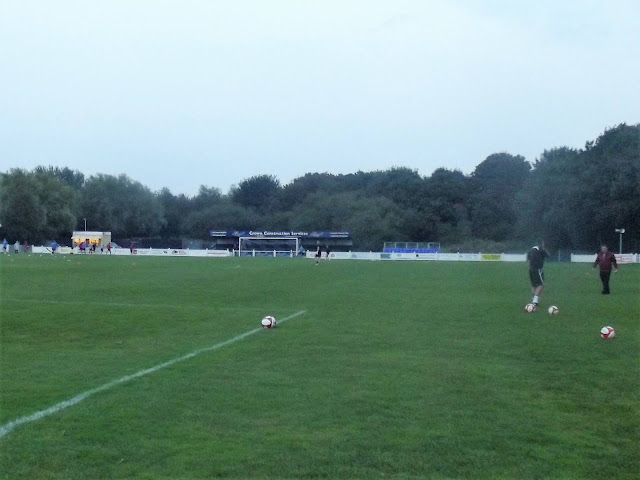 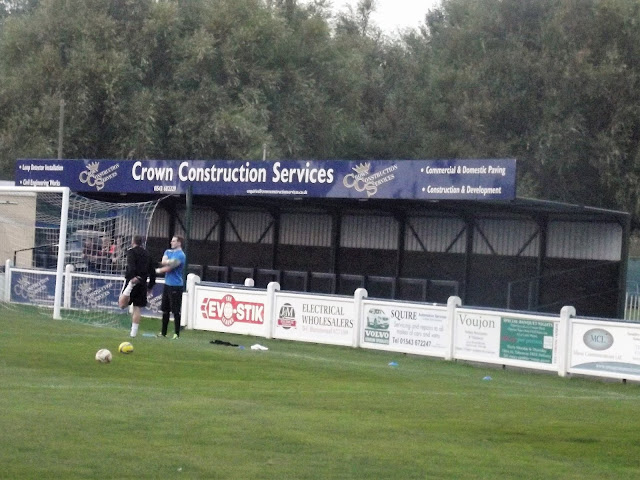 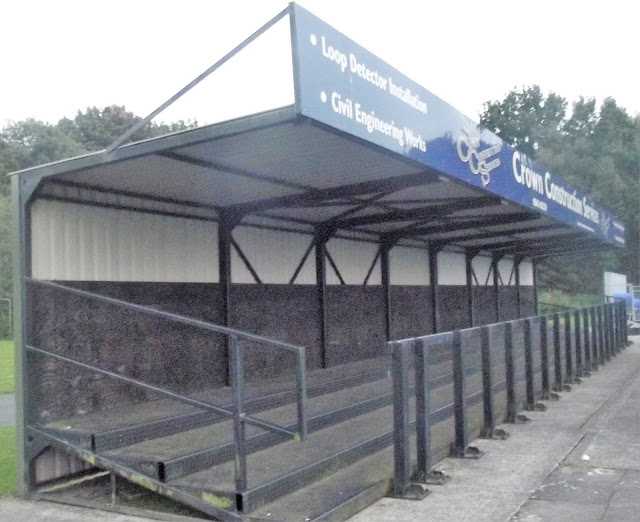 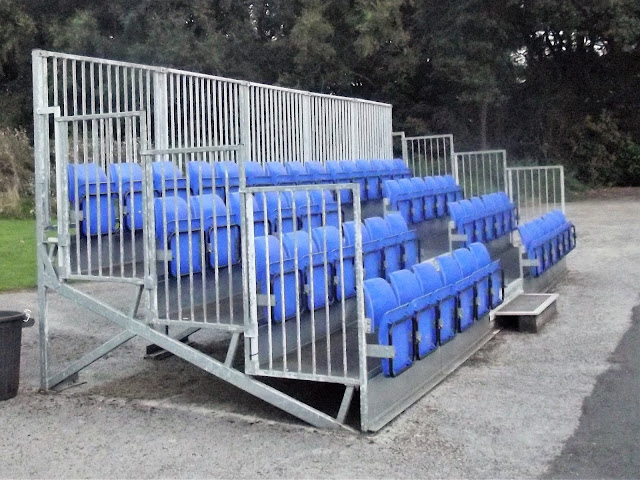 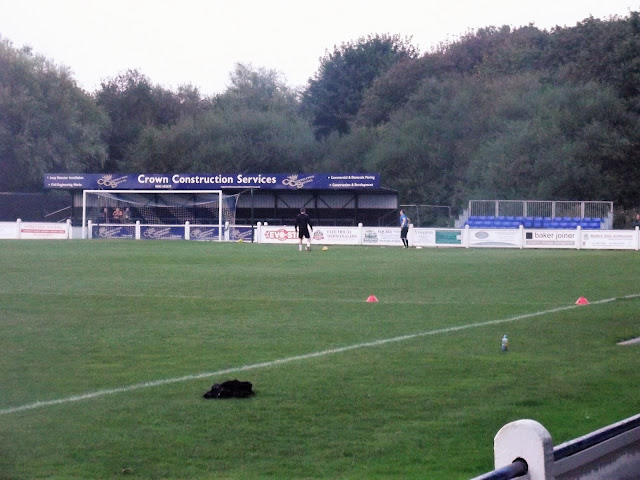 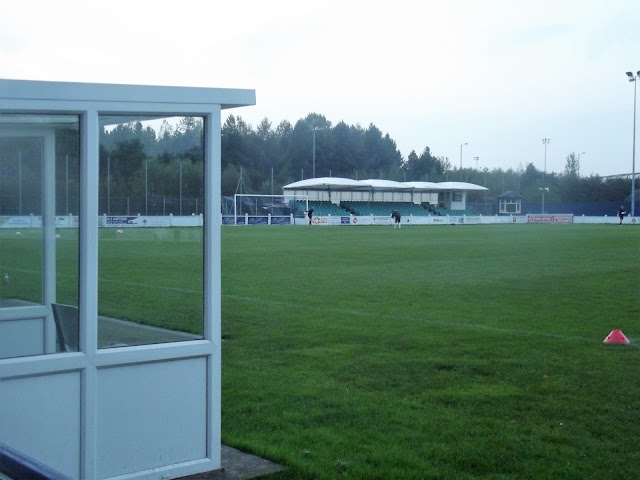 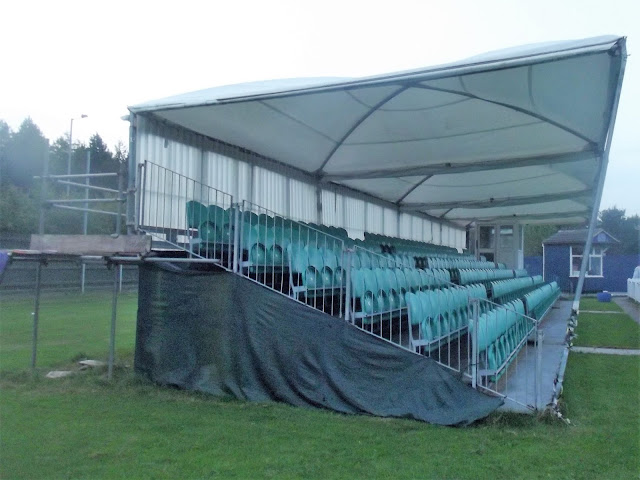