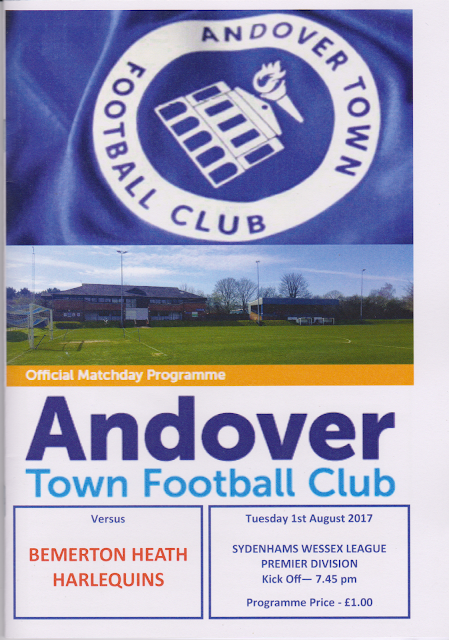 The club was formed in 2013 and have nothing to do with the town's other two clubs - the long established Andover New Street and the former Andover club who went bust a couple of years previously. Their formation came about thanks to Sparsholt & Andover Colleges, who took over the latter club's lease at the Portway Stadium. Andover Town started out in the Wessex League Division 1, winning promotion at the first attempt after they finished runners-up behind Petersfield Town. They've been in the Wessex Premier ever since, with a best ever finish of 4th coming in 2016, sandwiched in between two mid-table placings. Their record attendance of 546 came in the league game against Salisbury in 2015, with them suffering their record defeat of 6-0 in the reverse fixture. On the flip side, the record home win came in 2014 as they beat East Cowes Victoria 11-0, whilst away from home, they defeated local rivals Andover New Street 9-0 in the Wessex League Cup a year later.

The FA Cup has been entered since 2015 and Andover had their best run last season. After beating Royal Wooton Bassett Town 5-2, they travelled to Spelthorne Sports where they won 3-2. The run came to an end in the 1st Qualifying Round where they lost 5-0 at home to Farnborough. Last season also saw their best ever FA Vase run, winning 2-1 at Fairford Town before losing at Croydon by the same scoreline. The Hampshire Senior Cup tie at Brockenhurst in October 2014 might not have been much to write home about but a remarkable penalty shootout followed. 29 consecutive penalties were scored as Brockenhurst won 15-14. The FA confirmed it was a record in English football and possibly a world record. In their first ever season, Andover Town won the Salisbury Hospital Cup, beating Bemerton Heath Harlequins 3-2 and were also runners-up in the Andover Open Cup.

I knew I'd be on my own on this Tuesday, as fellow hopper Anwar was visiting family in Suffolk. So, to keep costs down, I wanted to stay as close to home as I could, travelling south if possible. I drew up a list of games to see what my options were, preferring a competitive game if possible. I did briefly consider a revisit to Uxbridge as it was nearer but after tagging both clubs in a tweet, Uxbridge didn't respond, whilst Andover Town were helpful and welcoming. It was close enough that I could eat at home to save cash, with the journey taking around 2 hours, even after taking into account the rush hour traffic. 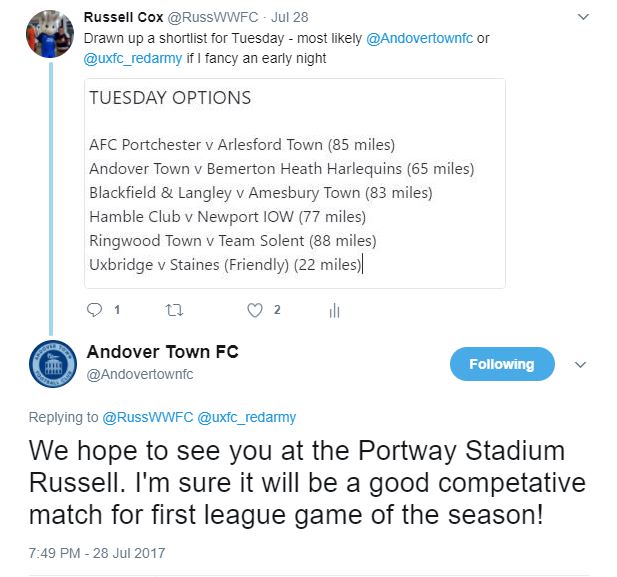 On the day of the game, I woke at 7.30 after one of my best night's sleep in ages. I'd have slept for even longer had the dustmen not woken me up with their noisy vehicle, in the end, I had another 45 minutes lazing in bed before getting up and having some breakfast. After having a bath and getting dressed, I did my usual Tuesday morning day off work thing of walking down town, before meeting my Dad for a lift home. Amongst other things, I got some nice Peri Peri chicken for lunch and ate it while I listened to Jon Holmes on TalkRADIO. I also caught up with a few things on my 'To Do List' before having dinner and leaving at 5.20 PM. Amazingly, it was a good journey despite the rush hour traffic and I was at the ground by 6.50. I paid £6 entry, plus £1 for a decent programme which is pretty good value at this level. I sat in the stand, catching up online and reading the programme while I waited for kick off. The pre match music selection was a bit modern for my liking, so I took a walk around to the far side while I took some pictures of the ground. 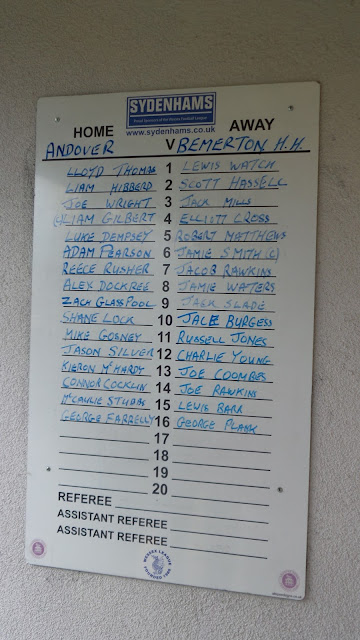 I was interested to see Mike Gosney make his debut for the hosts. He had been a transfer target for Wycombe back in 2011 after the left winger had scored nigh on 30 goals already that season back in March 2011. The move never materialised and it was a surprise to see him having dropped down a level since then. The game started at a good pace, with the visitors well on top during the early stages. They forced an early corner which came to nothing but a real chance came when a defensive slip let in Russell Jones but after dribbling past a few defenders he found himself too wide and hit the side netting. It was Jones again who got himself clear shortly after, but after dallying too much, his eventual shot was well saved by home keeper Lloyd Thomas. They were punished on the half hour when Andover had an attack from the right. An in-swinging cross was volleyed home at the back post by Zach Glasspool to give the hosts the lead. Ten minutes later, it was all square, Jones making up for his earlier misses with a low diagonal shot, following an attack from the left hand side.  Just before half time, Andover took the lead when visiting keeper Lewis Watch was unable to prevent Reece Rusher's low shot from the edge of the area going in. 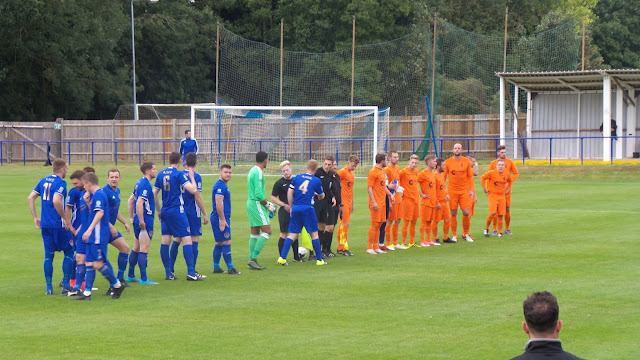 On the first half showing, it looked as if it was going to be a close game, but Andover came out a changed team.  They extended their lead to 3-1 a couple of minutes into the second half when visiting keeper Watch could only parry a shot and Glasspool was there to follow up for his second of the night. Former Wycombe target Mike Gosney got a goal on his debut after he dribbled into the area and shot into the bottom right-hand corner from 12 yards. The game was getting quite feisty now, with some strong tackles going in, especially from the visitors who were no doubt frustrated that the game was slipping away from them. The game was put beyond all doubt on 69 minutes when Luke Dempsey netted from close range after Bemerton failed to clear their lines. The goal of the game made it 6-1 when Jason Silver curled a beautiful shot into the top right-hand corner. This meant a good night for the vast majority of the 151 crowd, which actually looked more on the night.

It had been a decent game overall and Bemerton must have wondered what might have been, had they taken their earlier chances. As I was leaving, a friendly home official thanked me for coming, which rounded off a good night at a friendly club. I left at 9.40, tuning into the Wycombe Sound Sports Show on my phone which kept me going until I got home. I arrived home at the decent time of 10.50, going to bed half an hour later. However, I didn't get to sleep for ages and so needed my usual nap the following afternoon after getting up for work at 4 am. Next game for me is the FA Cup game between Flackwell Heath & Burnham, followed by Wycombe Wanderers v Lincoln City on Saturday, both revisits. 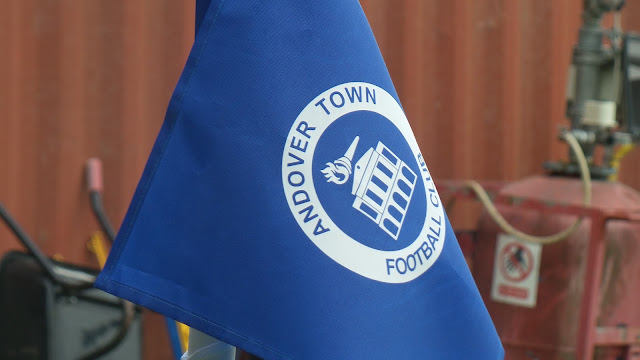 THE PORTWAY STADIUM is a smart and tidy venue. The main stand holds around 300 and offers an elevated view from its bench seating. The views are pretty good thanks to no supporting pillars. In addition, there is an area of cover behind on goal for around 70 fans. The rest of the ground is open but is very well kept.

The location isn't the best, in the middle of an industrial estate but at least there is plenty of parking. I didn't see much nearby, but at the ground, there was a basic bar offering canned drinks, as well as a decent looking tea bar.

1: Ground facilities & condition (for the level)
A decent and well kept venue for the Wessex League (6)

2: Area around the ground (parking, food/drink, public transport)
In the middle of nowhere, plenty of parking though, and nice surroundings (4)

3: Welcome / Club Friendliness
A very friendly club, one of the most helpful too (8) 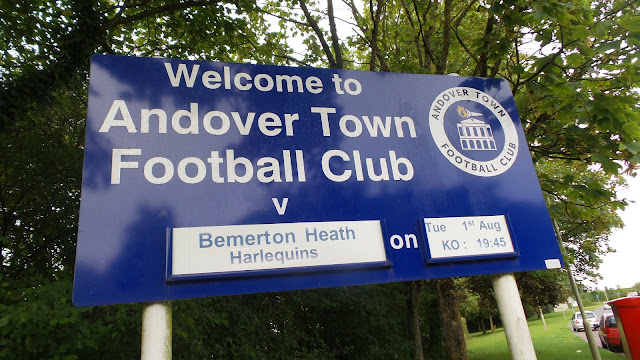 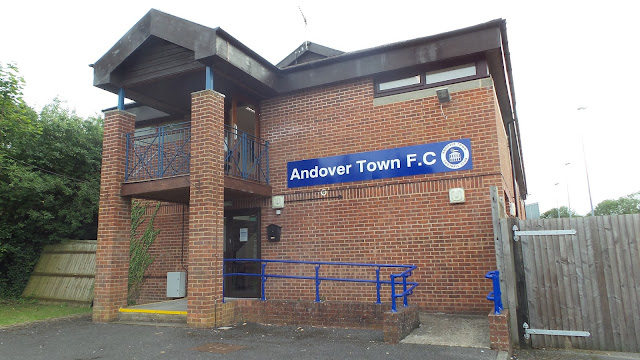 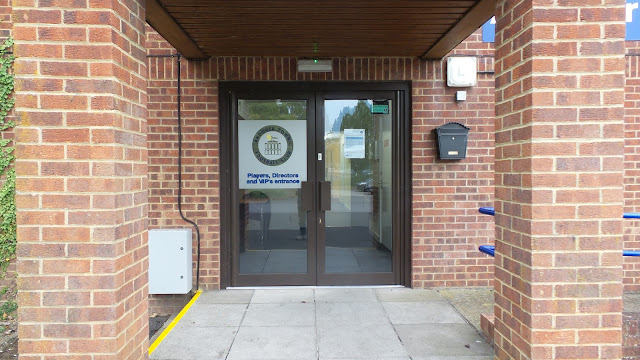 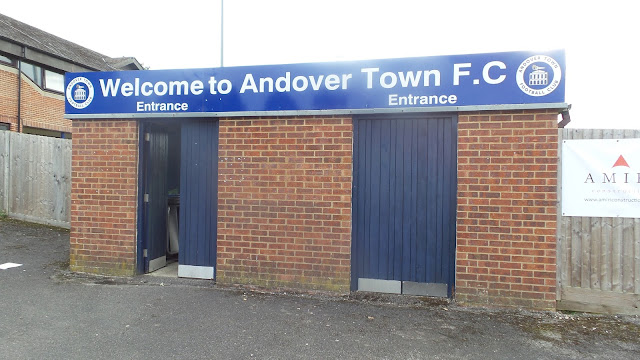 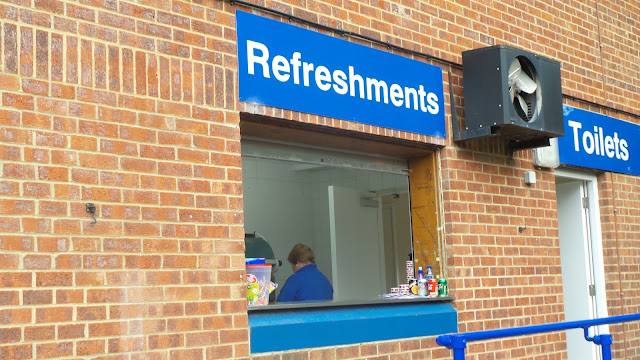 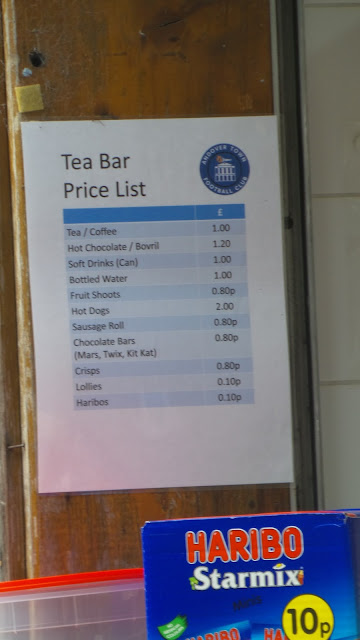 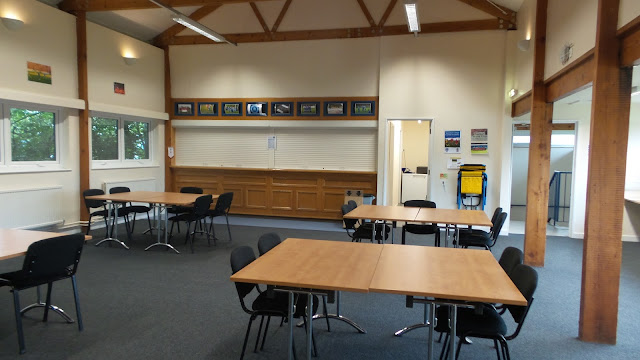 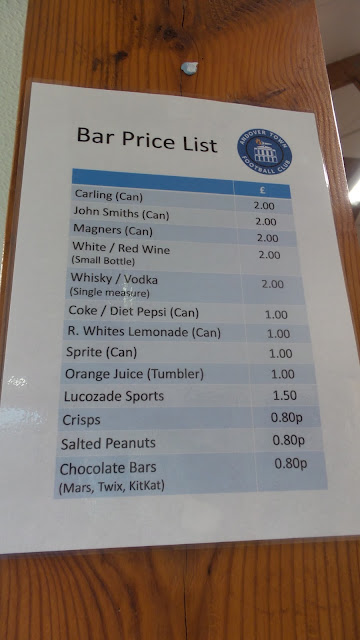 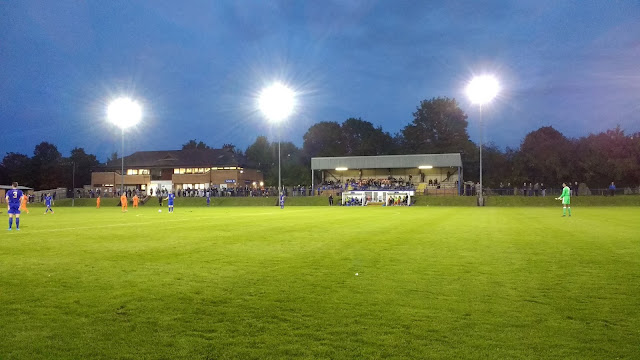 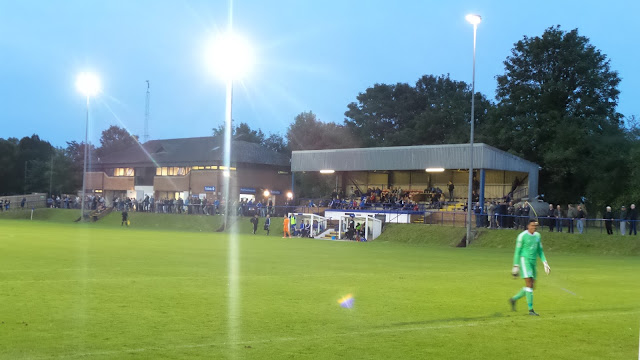 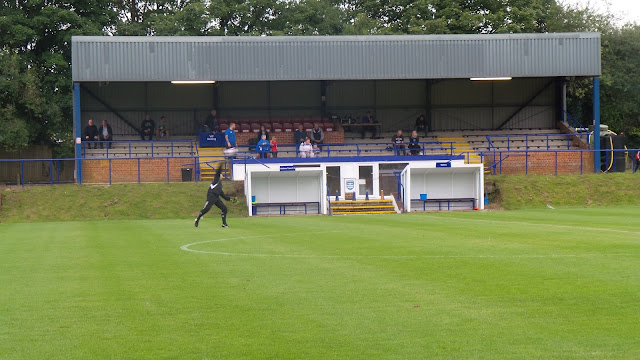 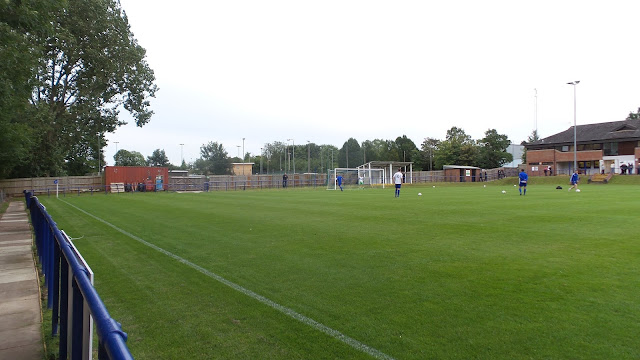 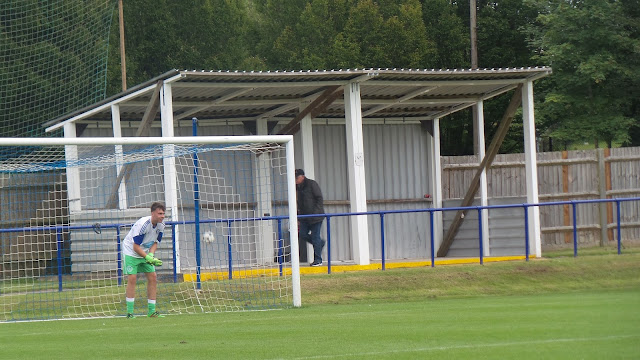 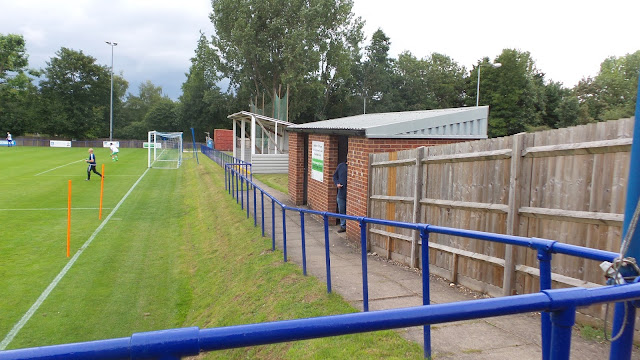 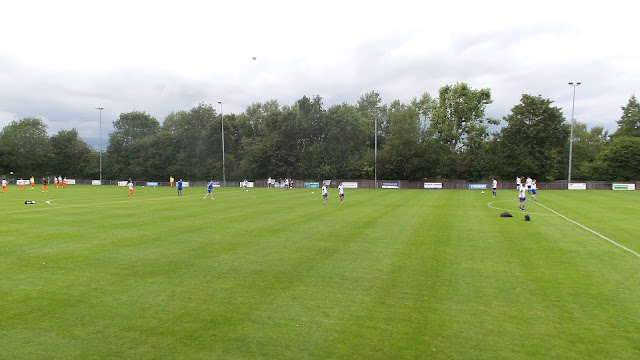 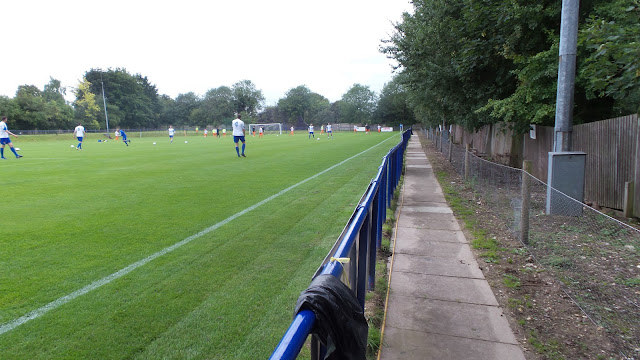 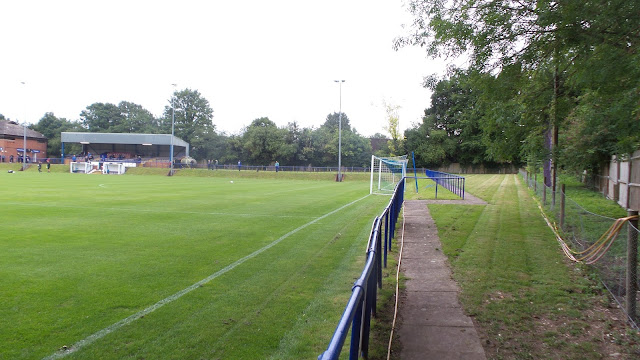