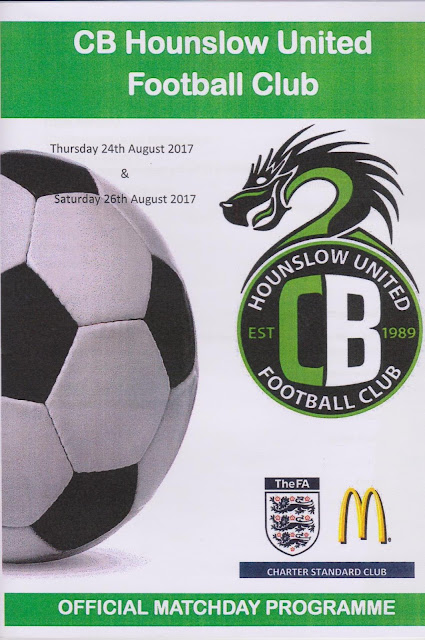 The club was formed in 1989 and took their name from Carter Bank, the club's first sponsor who were owned by the father of the club's first chairman. The club originally played in the Hounslow & District League before progressing to the Middlesex League in 1997. After progressing from the First Division, they did well enough to finish as runners-up twice. They made the step up to the Combined Counties League in 2006 and at the time played at the Osterley Sports Club in Hounslow. They spent 10 seasons in the CCL Division 1, struggling at first, but winning the title last season. From 2013 - 2017 they ground shared at Bedfont, before moving home to their new £1.5m ground at the start of this season.

CB Hounslow United have only had two seasons in the FA Cup so far. Last season saw a decent run, with them beating Fairford Town 5-1 and the then Southern League side Petersfield Town 2-1. They finally lost in the 1st Qualifying Round, 3-1 at Isthmian Premier side Met Police. There have been 3 seasons in the FA Vase, but success has been limited with the club's only victory coming last season as they beat Bedford 1-0, only to lose 3-1 at Thrapston Town in the 2nd Qualifying Round. 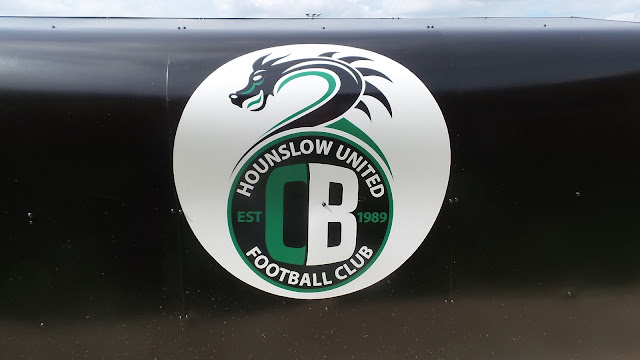 I was hoping for a game on the train on this Saturday to give my car a rest, but the choice was so uninspiring. Out of the 4 possible new grounds, Croydon and Woodford Town played at athletics tracks with the former charging £7 entry and another £2 for a programme for a view miles away from the pitch. Had it been a bit cheaper, I might have gone for it. I know it's only a quid or two, but it's the principle that counts, and I'll save them for a more attractive game. The other two options - Kent Football United and Bridon Ropes were very basic and didn't inspire me to make the trip across London. I'd have loved a trip to Birmingham or Kent, but had left it too late to get train tickets at a reasonable price. I had a brief thought of contacting fellow hopper Chris, but as expected, he was busy doing other stuff, as per usual for a Saturday. I therefore decided to take the closest option to home, CB Hounslow United v North Greenford United, which actually looked an OK game. Their ground was actually nearer Feltham (or so I thought) and I'd make a decision on the day whether to park up and walk into town, or just go straight to the game. 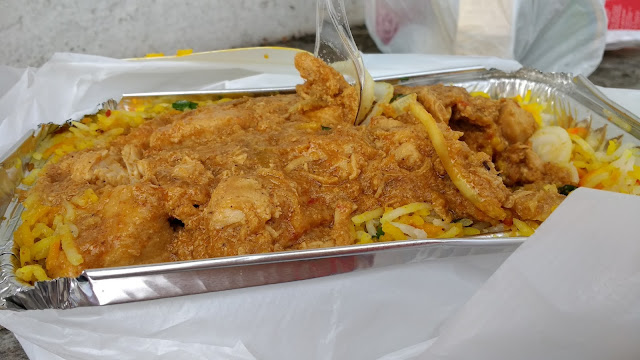 I'd also been considering whether to go to Denham Car boot on the way, but after a late night the previous evening, I decided not to bother. I'd woken up at 8.30 on the morning of the game and fancied chilling and not doing much. After making myself a bacon & egg burger for breakfast I caught up with my YouTube subscriptions and had a bath. As per usual I listened to The Two Mikes on TalkSPORT before leaving at 12.30. The plan was to park up at the ground and walk the 10 minutes into Feltham where I'd go to Wetherspoons for lunch. Or at least that was the plan, but the given address on their website was incorrect, leading me to a long since demolished servicemans club in Feltham. As with so many situations, the excellent Groundhopper app got me out of a hole and after going through that for the location, I was at the ground by 1.40. It was in the middle of nowhere and so, with loads of time to kill, I went in search of a takeaway. Google Maps pointed me in the direction of a place called Zam Zam and despite heavy traffic along the way and barely any parking, it was well worth the trip. I had an excellent curry and rice for £4.50 which was an absolute steal. It was a really old traditional place with hand written notices but the food was great. I then stopped at a shop, getting a can of Union Black cider and a newspaper before going back to the ground. 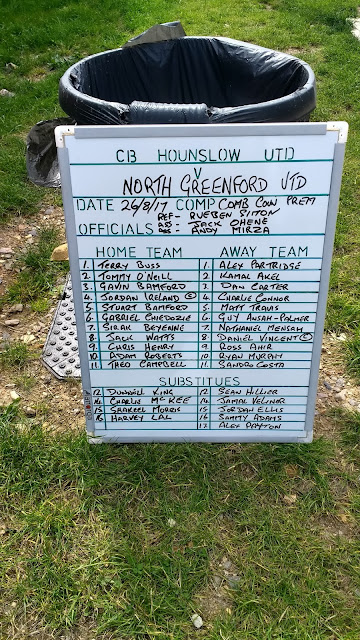 I arrived back at 2.30, paying a bargain £3 to get in, which included a programme. Either that's a normal price or I aged quicker than I thought and got in as an OAP. It was a boiling hot day, so I appreciated the cold drink that I'd bought, choosing to sit in the stand to drink it while I wrote this blog. The game started with North Greenford shading it, but gradually Hounslow grew into the game. The hosts opened the scoring on 29 minutes, a good through ball finding Chris Hendry whose shot clipped the right hand post on it's way in. The goalscorer was sent off on 35 minutes for violent conduct according to what I saw on Twitter, but I didn't see anything that merited the red card. At half time I caught up with Twitter and was glad to see that Wycombe were leading 2-0 at Grimsby, carrying on their excellent record against the Mariners. The second half started with Hounslow well on top and they doubled their lead just before the hour when Stuart Bamford rifled into the roof of the net from around 15 yards. Aside from that, the referee seemed to be in a world of his own, inconsistent and making some really strange decisions. The CB Hounslow manager was a great laugh though and the linesman on my side of the pitch joined in with the good natured banter too. This kept us entertained whilst an injury to Greenford's keeper Alex Partridge resulted in a long stoppage. Hopefully he will be OK, but there was nothing malicious in the original challenge, just 2 players going honestly for a loose ball. Guy Ansah-Palmer grabbed a late goal for the visitors as he netted from close range after the home defence were caught napping. The amount of injury time dragged on before the inevitable happened. In the 9th minute of injury time a square ball was played across for Ross Amir to net the equaliser from a couple of yards out. The game finished little over a minute later and had been a reasonable contest. albeit one that could have been a lot better if the whistle-happy referee had allowed the game to flow. 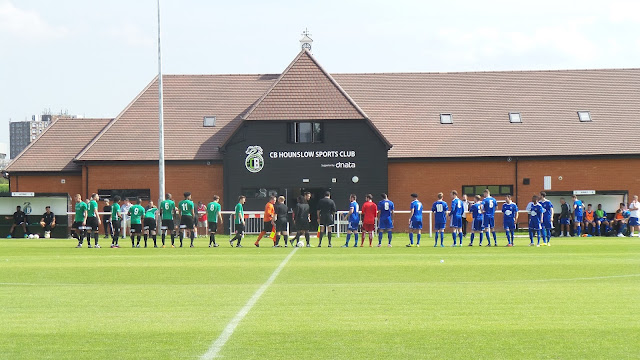 All during the game there had been planes going over the ground, departing and arriving from the nearby Heathrow Airport, so if you are a plane spotter, you're in for a double treat. During the second half Wycombe had shown their defensive frailties to throw away a 2-0 lead, despite playing against ten men. Thankfully they got a late winner though, thanks to another brace from Akinfenwa. I tuned in to BBC Three Counties on my phone to listen to all the post match reaction. As well as the Wycombe win, it was heartening to see that Milton Keynes had good a good clobbering up at Blackburn. It was a good run home, and I was back by 5.40. It was the usual Saturday evening ritual of killing time doing stuff until Match Of The Day came on. Next up for me is a game or two on Bank Holiday Monday, depending on what other hoppers are up to. THE LAIR is typical of a new build, the usual metal stands may be practical, but they aren't the best. At least on this occasion, they look a bit different to the standard black 'arena' type stands and the seated area is decked out in club colours. There's around 100 seats, plus covered standing for another 50 or so behind one goal.

The rest of the ground is open and as you would expect from a very new ground, it's well kept. There are bar and food facilities, these do the job but are nothing amazing. I didn't see anything else so you might be better off stopping nearby if you have time. Overall, it's a good place to visit though, there's a nice community buzz around the place and it's a good value day out.

1: Ground facilities & condition (for the level)
A decent facility, but typical of the new grounds in that the stands are flat pack metal ones (6)

2: Area around the ground (parking, food/drink, public transport)
Fair walk from any facilities, car park gets full but plenty of other options (5)

4: Value for money
They charged me £3 for some reason, even at £6 it's good value including programme (9)

6: Programme
Nothing spectacular, but had all you need to know. Plus it was 'free' with entry (7)

7: Game entertainment
Some good play from both sides, despite a whistle-happy referee (7) 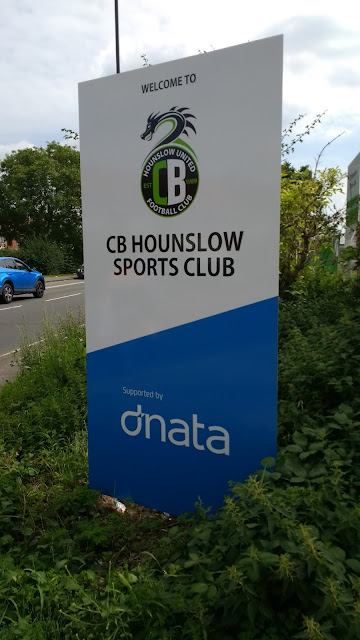 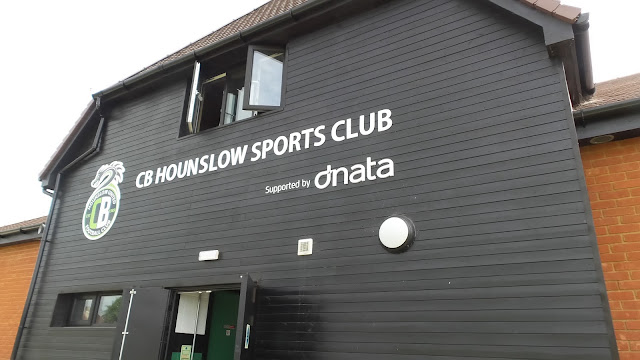 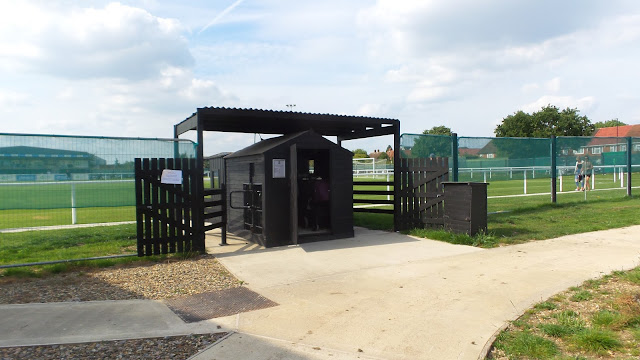 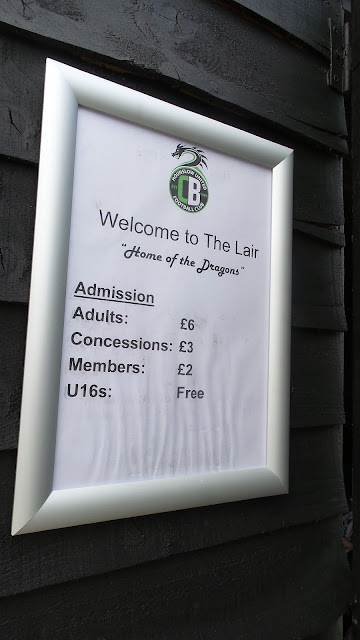 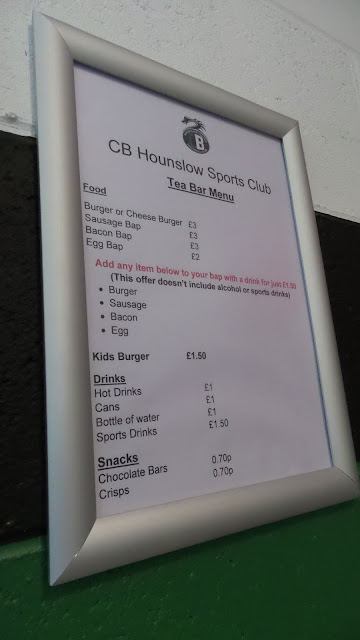 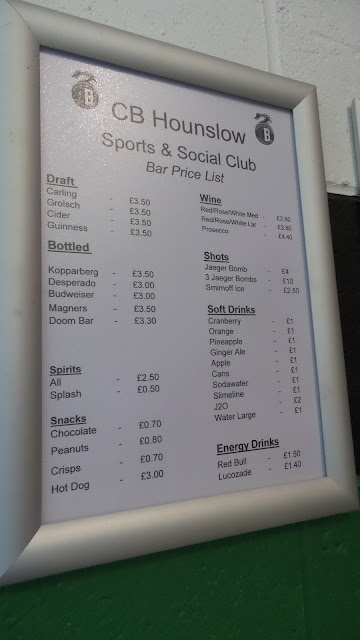 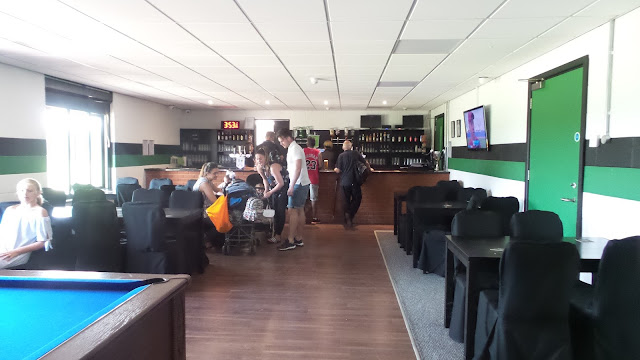 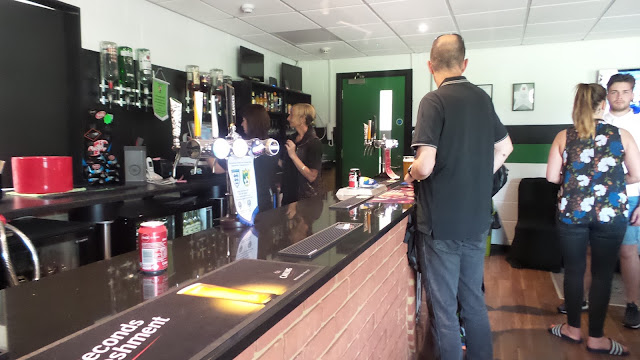 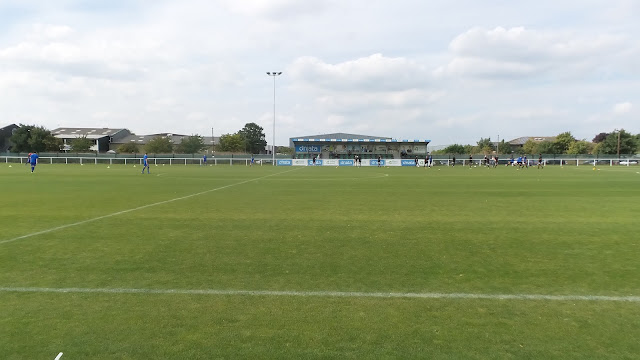 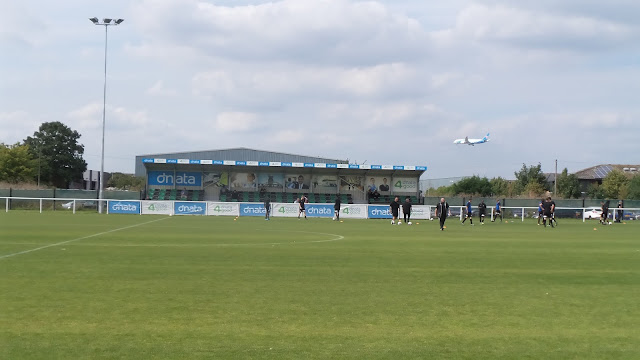 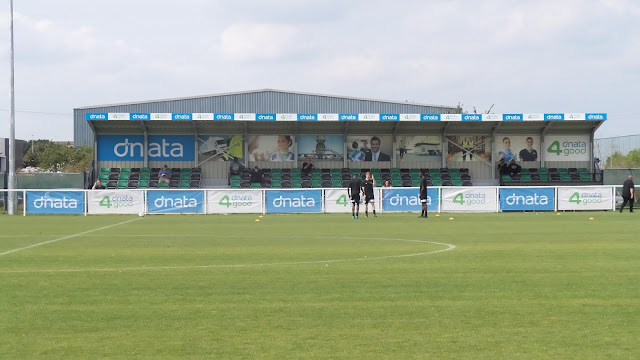 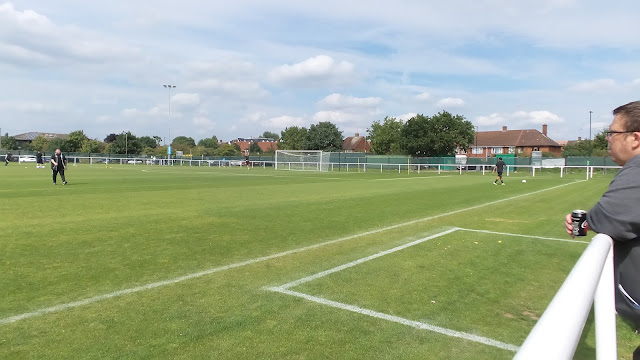 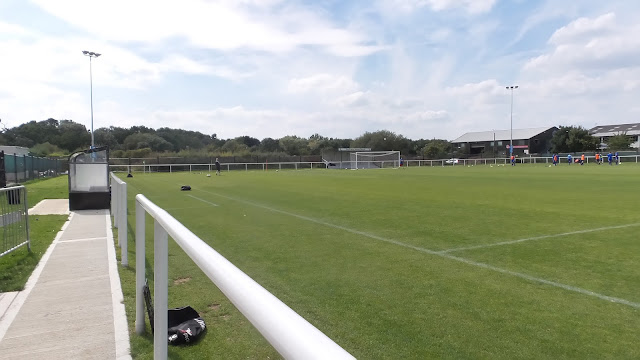 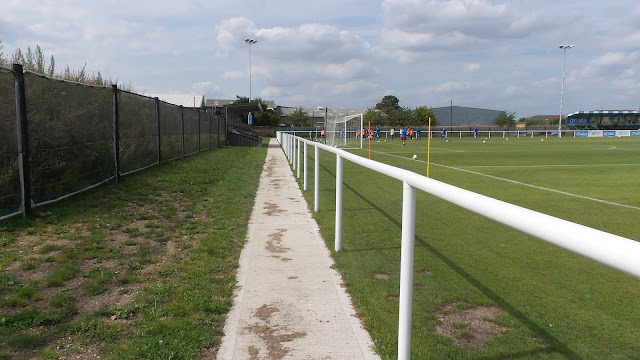 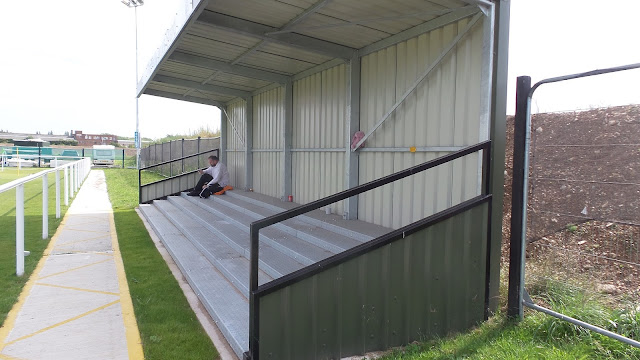 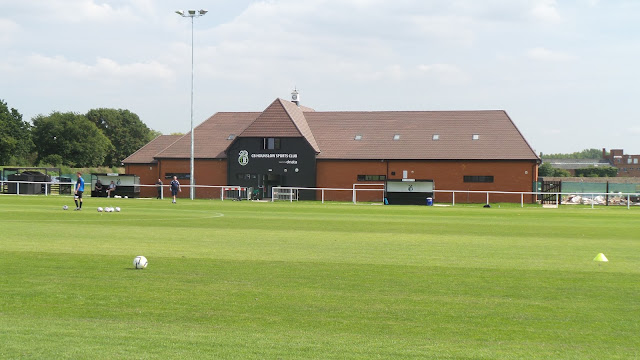