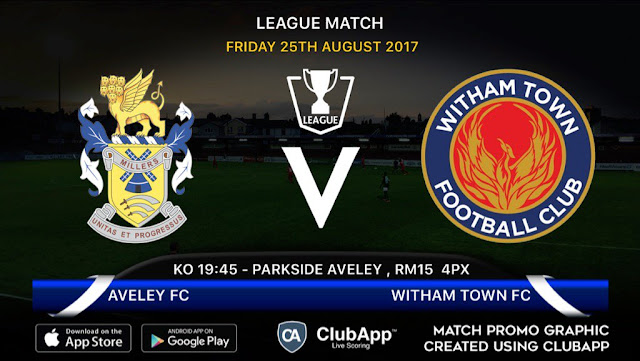 The club was formed in 1927 and played in local leagues until the outbreak of the Second World War. Following the resumption of football, they joined the London League, before progressing to the Delphenian and Athenian leagues. In 1973, they joined the Isthmian League in what was the league's second tier. Despite a promising 5th placed finish in their first season, the next 13 seasons saw them finish in the top half just once and they were relegated to Division 2 North in 1986. They were promoted back four seasons later, but really struggled in the 1990's when they fell as low as Division 3, with a 14th placed finish in 1999 being the worst since they joined the Isthmian League. The turn of the century saw fortunes improve and in 2002, following league reorganization, they were placed in Division 1 North. Their time here was punctuated by a couple of disappointing seasons in the Southern League Eastern Division due to their geographical location, but they soon returned to the Isthmian League. In 2009, they won the Isthmian D1 North title, gaining promotion to the Premier Division. Their first season here saw an incredible 3rd placed finish, the best in the clubs history. They lost out to Borehamwood in the playoff semi-finals and after a couple of seasons of struggle, they were relegated back to Division 1 North. They've enjoyed moderate success since their return in 2012, missing out in the playoffs in their first season back with defeat to Maldon & Tiptree. Last season saw a 7th placed finish, and they are no doubt hopeful that the new ground will push them on to better times on and off the pitch. They are yet to win at their new stadium, though it is early days. Aside from a couple of friendly defeats, the only competitive game played at the ground was a 3-1 defeat to Bowers and Pitsea on the 12th August.

Aveley's best season in the FA Cup came in the 1970/71 season. They beat Braintree, Boreham Wood, Hayes & Leytonstone before losing out to fellow non-leaguers Yeovil Town in the 1st Round. The FA Amateur Cup Quarter Final was reached in the same season with a 2-0 defeat to Slough Town. The club has also reached the 1st Round of the FA Trophy (losing to Weymouth in 2003) and the 4th Round of the FA Vase (losing 4-0 to Wivenhoe in 1996). Locally Aveley have won the Essex Thameside Trophy three times, as well as the Isthmian League Cup in 1990, in the process becoming the only side in the competition's history to win it whilst in the bottom league. Their record victory of 11-1 came when they defeated Histon in 1963, whilst their record attendance of 3,741 came when they played Slough Town in 1971.

I always like a bit of Friday night football and had managed a game on a number of occasions already. This Friday looked to have drawn a blank, however - there was plenty of choice, however, I'd been to them all in recent times. Even the ambitious plan of a revisit to Macclesfield (after fellow hopper Chris had rejected my idea of a visit to Runcorn Linnets) was out after Chris had announced that he was busy. There was one option, however. Despite not being listed in the Non-League Paper or other sources, there was an Essex derby at Aveley's new ground as they played Witham Town. Entry was a rather steep £10 for step 4 football, although I'd had a freebie friendly for a farewell game to their old ground to be fair. I'd still need a bit of help though, as it was one to do in the car - it was doable on the train, but it was a real elongated way of doing things. Also, my last two games had cost me over £30 each, so I was trying to keep costs down. Thankfully, my regular Tuesday hopper was available to do it - after initially telling me 'he'd let me know' as per usual, he confirmed on Thursday that he'd be able to make it. 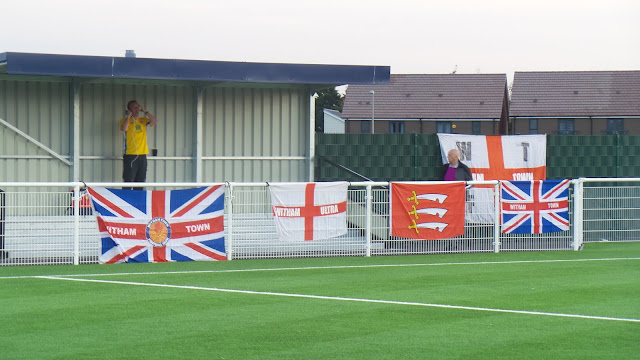 On the day of the game, it was the busiest day at work for ages, but even so, I was finished just after 12.30. I bought a few things for the weekend before heading home. After having a pizza for lunch, I got freshened up and changed and started doing some research for my visit to CB Hounslow United tomorrow. I also made some progress on my upcoming trip to Belgium in a fortnight, purchasing a ticket for Anderlecht on Friday night and making tentative arrangments to pick up a ticket for the KV Mechelen game on Sunday. I wished I'd had a bit more time to get a list of possible games to show to Anwar for next week, but time was against me. I did at least get a list of all the 11 am kick offs, which were mainly in the Sussex area as suggestions for a potential double in that area. I then got my things together, leaving at 4 pm and meeting Anwar in Aylesbury half an hour later. I'd been expecting a delay and on a decent day, we would have been there by 5.45. However, after taking 40 minutes to go a mile on the M25, there were warnings of further misery ahead and using my phone it diverted us via the M11 and South Circular. Even though it added 15 miles, it saved us over half an hour on the normal route. We had to stop on Aveley High Street rather than walking, due to the delay. It wasn't the most salubrious of areas, but at least there was a great range of takeaways. I opted for my usual Chinese option of Salt and Chilli chips, which came in at a very reasonable £2.30 Anwar followed suit, with it taking 20 minutes for it to come. When it did, it was very good and I had a new convert who loved it too. The Happy Garden in Aveley coming out above average compared to others. 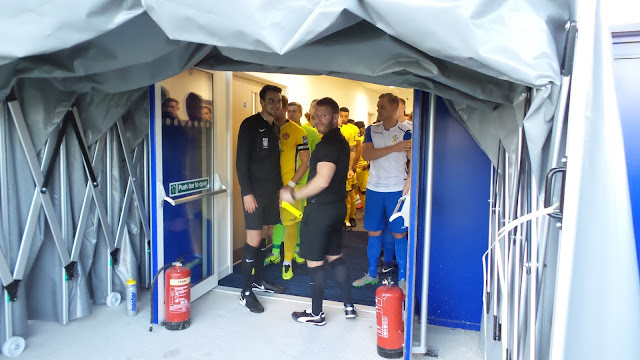 We made our way to the ground, paying our tenner to get in. I didn't bother with a programme at those prices as I am rapidly running out of storage space anyway. The Witham Ultra from the Undateables TV show was in attendance and was in brilliant form. He'd bought a host of flags with him and was in good voice with him singing most of the night. For their part, his team were definitely the better side. Real chances were few and far between though and the game was mainly notable for a series of niggly challenges from both sides. The hosts came back into it towards the end, but it remained scoreless at the break. At half time I went in search of a team sheet to no avail although it was a lovely setup, albeit with not as much character as their old ground. The competitive nature of the game continued into the second period, but the chances were slow in coming. Witham were the better side and they took the lead on 78 minutes. Aveley keeper Rhys Madden made a cracking save to keep out the initial shot but he couldn't prevent Elliot Ronto following up. The goal sparked wild celebrations, especially amongst a trio of groundhoppers who had been joined by Anders from Norway, who were just relieved they'd not seen a 0-0. Madden later came out and clattered Witham striker, probably more clumsy than malicious but it provoked an angry reaction and both players were booked. It had been a fairly mediocre game up until that point, but there was a late twist. Deep into injury time Jack West headed home, although Witham keeper Lewis Moore came out, he didn't get proper contact with the ball, Astonishingly, the hosts didn't stop there. A minute or so later the ball fell to Jack Watson and he rifled the ball home to score a dramatic late winner. 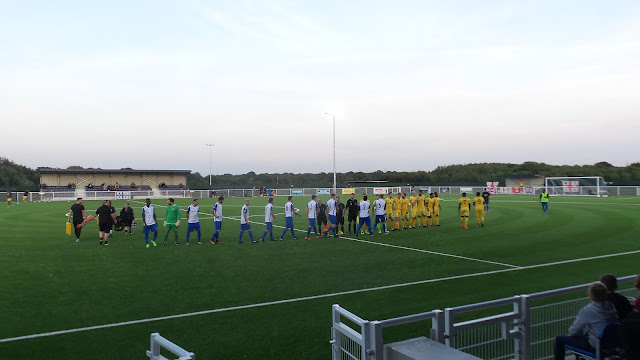 On the balance of play, Aveley can count themselves very lucky, but their late burst was impressive. There was a fair bit of time added on and after saying our goodbyes to Anders and some gutted Witham fans, we didn't get away until 9.50. I tuned in the radio to TalkSPORT for the brilliant Two Mikes show which made the journey pass very quickly. It only took an hour to get back to Aylesbury as the roads were actually decent for once, After dropping Anwar off at 10.50, I was back home by 11.15. I cracked open a couple of ciders as well as a Bacardi and Irn Bru while I listened to the remainder of the Two Mikes show. It was nice to hear contributions of fans from Salisbury, Ashton Athletic and Immingham Town rather than the usual raft of Premiership fans. I stayed up for another half hour or so, getting to sleep just before 1.30 after having had a good evening. 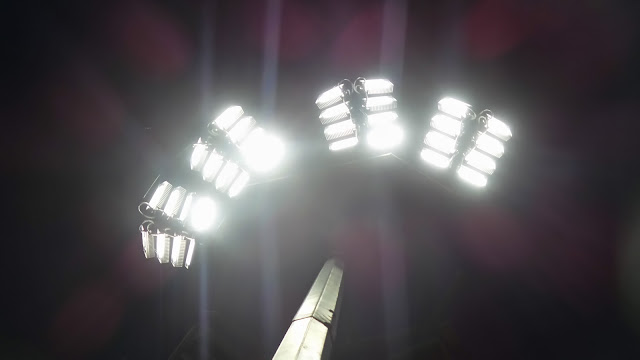 PARKSIDE is one of the better new builds being fairly close to the town and having good facilities. The main stand is built in front of the bar and has a capacity of around 200. There is another smaller stand holding another 100 as well as cover behind the goals for another 200. Bar and food facilities will get you by whilst not being exceptional, they do the job. The town is fairly close by and offers a good range of takeaways, but nothing special on the pub front.

1: Ground facilities & condition (for the level)
Not as much character as Mill Field, but a smart main stand and reasonable rest of the ground (7) 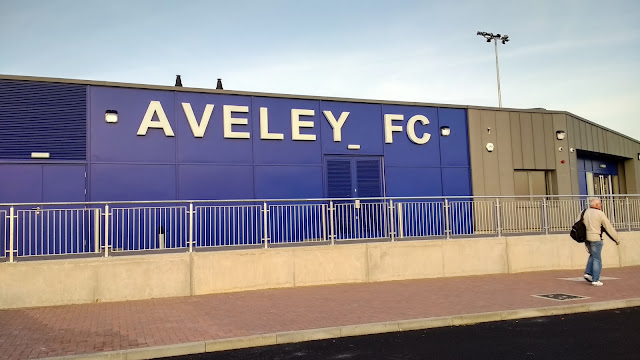 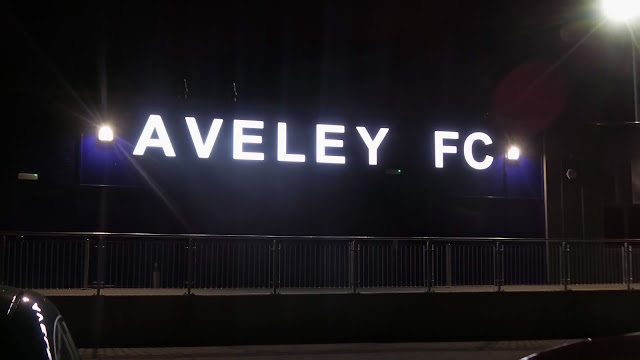 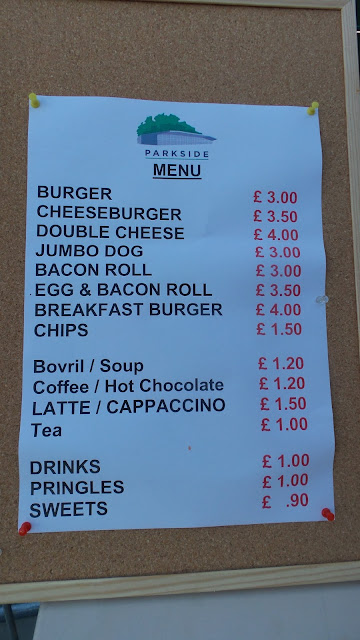 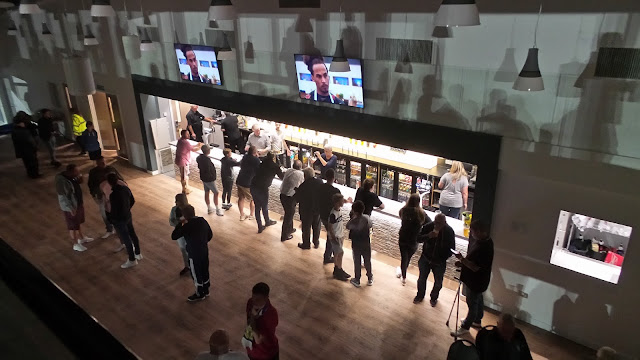 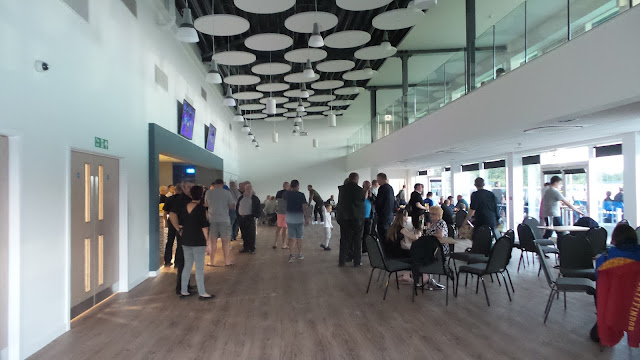 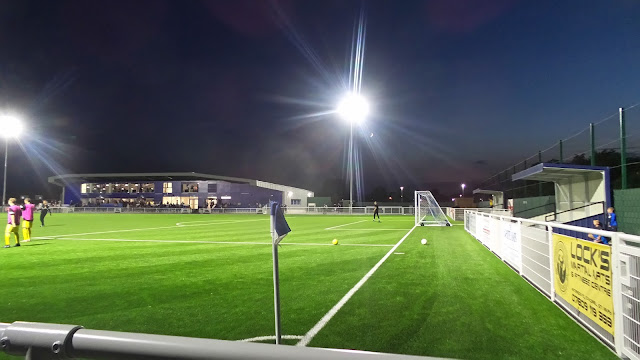 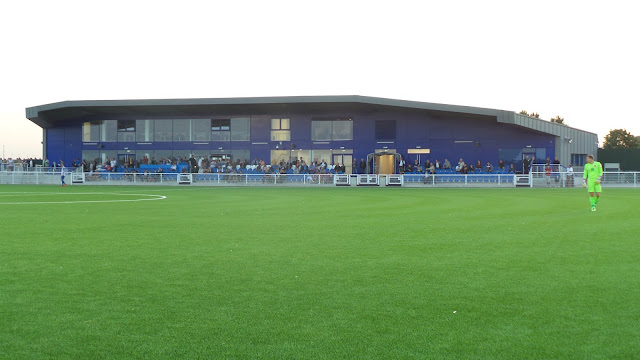 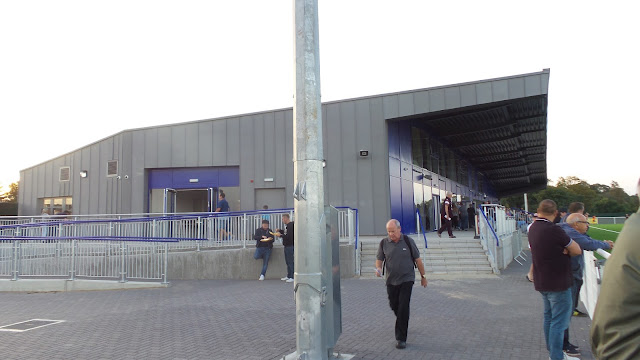 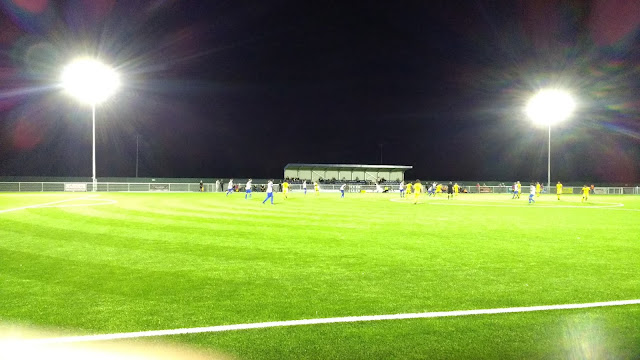 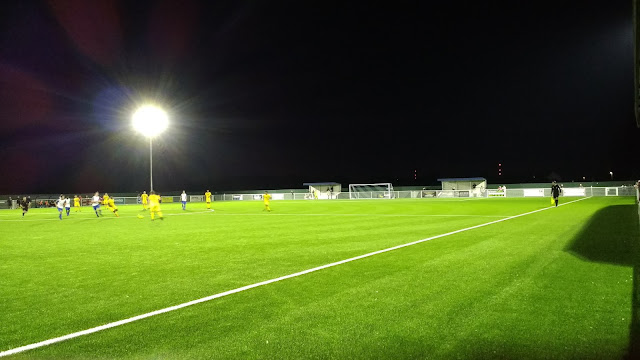 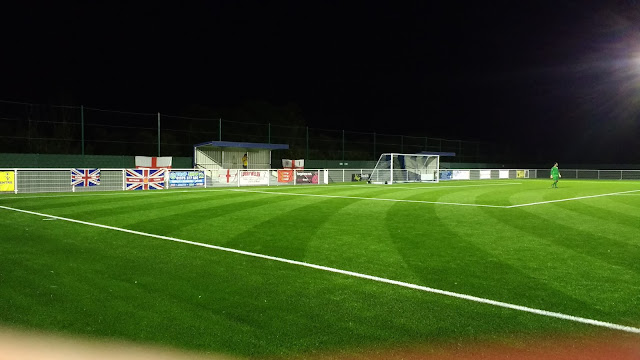 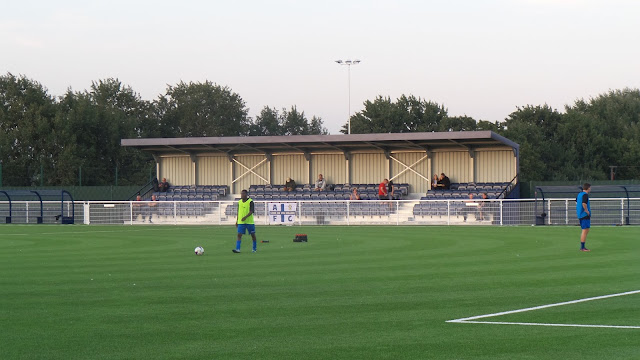 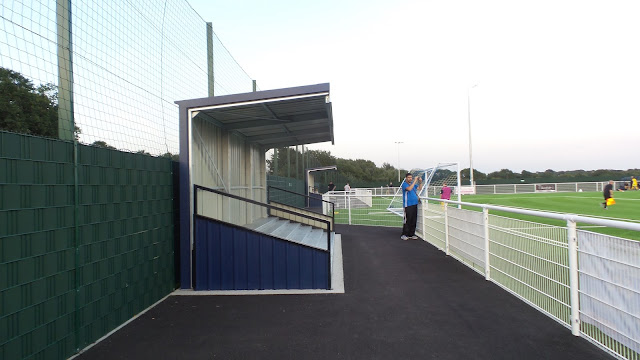 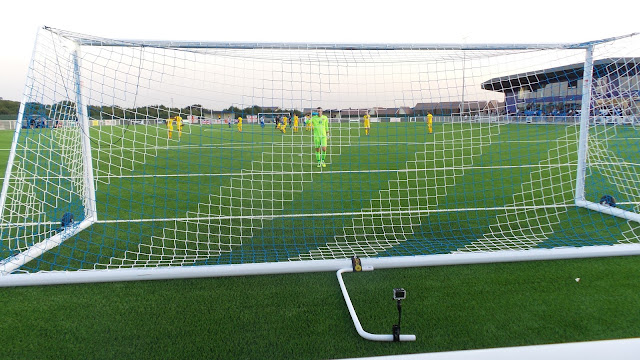