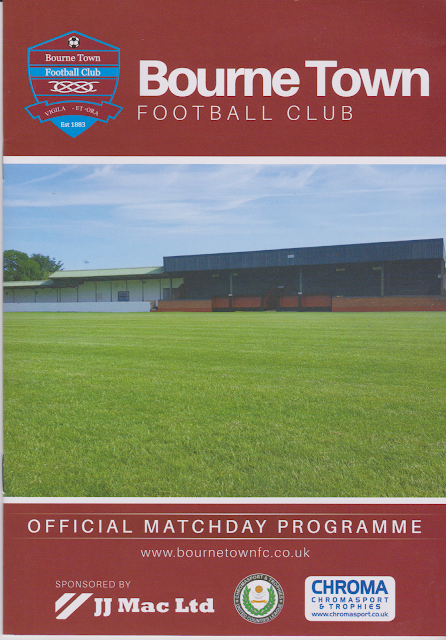 The club was formed in 1883 and up until the start of the second world war, participated in local leagues such as the Peterborough & District. Between 1947 and 1956, they enjoyed their first spell in the United Counties League. Despite having two 7th placed finishes, Bourne generally struggled and would drop back down to local football for a few years. They would join the Midland League in 1961, but again they found results hard to come by. A return to the United Counties League in 1965 would see a dramatic improvement, however. From 1965 until 2010, Bourne Town enjoyed unbroken membership of the UCL's top tier and were champions on four occasions, the golden spell being between 1968 and 1972 when they won three of those titles. In 2010, despite finishing 17th out of 21 teams, they were relegated to Division 1 where they remain to this day. Finishes have generally been disappointing, with an all time low of 21st in 2014, though two years later they enjoyed their best finish since returning of 5th.

In the FA Cup, Bourne Town enjoyed their best run on three occasions, the last being in 1965 when they went out to Wellingborough Town after a replay. A spell in the FA Trophy saw them reach the 1st Round in 1972 before losing to Bridgwater Town. In the FA Vase, the clubs best ever run saw the club reach the 4th Round in 1990 where they lost to local rivals Spalding Town in a replay. Locally the club have won the UCL Knockout Cup in 1970, the UCL Benevolent Cup in 1991 as well as 4 various Lincolnshire FA Cups. Their record attendance of 3000 came for an FA Trophy game against Chelmsford City in 1970.

From our game at March, Eddie and I made our way to Bourne, the journey taking 45 minutes which meant we got there at 5.45, two hours before kick-off. We both went our separate ways for our pre-match plans, with me heading off to an interesting pub called Smiths. Before I could take any more on board, I needed to offload and so encountered possibly the smallest toilet cubicle in the world. Once I got back downstairs though, I was a lot happier. They had a great range of real ciders, of which I tried a couple. First up was Cockeyed Mad Jack, which was nice enough, but not exceptional. My second cider was a half of Roundabout by Circle cider. It was an accidental retry, but the recipe and strength was different to the one I'd previously tried. By now it was 6.50, so I went in search of food. I found a decent looking place called China Garden. Despite saying it would be half an hour, my chicken satay skewers and salt and chilli chips only took 10 minutes. It was fairly average fare, which I ate on the way back to the ground. It was whilst en route that I encountered Bourne's answer to Vicky Pollard, a highly-strung woman in pink leotard and grey joggers who'd obviously encountered the authorities before 'We're gonna f*cking lose him now, Dave you bastard' she screeched at her boyfriend. Dave to his credit, remained calm, picking up the child in a pushchair that his feral girlfriend had dumped before walking off, telling her to go home and get some sleep. Like March, it had been a town of contrasts, some really nice pubs, but some parts that didn't reflect well on what was a decent place. 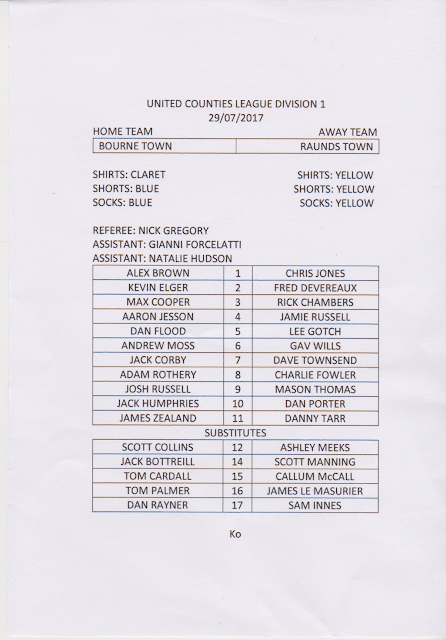 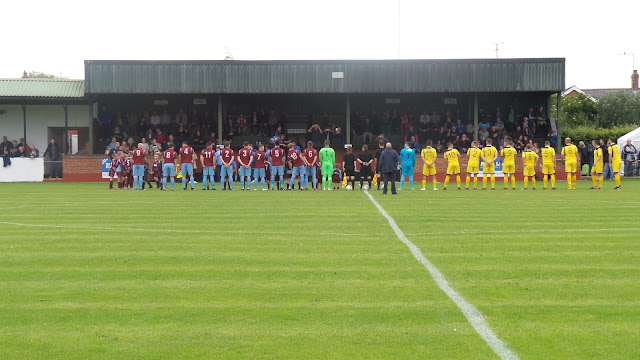 By 7.15 I was at the ground, so I fetched my bag from the car and went in. Entrance was well priced at a fiver, plus it was £2 for a glossy but thin programme. I also went in the bar and got a nice pen for £1.50. I met Rob, a Winchester City fan as well as a few other hoppers before taking my place on the far side, near the halfway line. The game kicked off at a lively pace, strangely both captains were the goalkeepers and within 5 minutes both had made good saves to keep the game goalless. By now, it had started to spit, so knowing that a fair bit of rain was forecast, I moved to the cover on the other side. The game didn't live up to its lively start, with chances soon drying up. Raunds had a dominant spell around the half hour mark and took the lead on 38 minutes, a nice through ball leaving the Dan Porter with a simple finish. The rain came and went, then came again, so I found myself sheltering under a tree behind the goal. Both sides had chances but Raunds doubled their lead on 83 minutes. Dave Townsend held off a couple of challenges before finishing with a low shot just inside the area. Right at the death, Bourne Town were awarded a penalty to reduce the arrears. Josh Russell was fouled in the area by visiting keeper Chris Jones before dusting himself down and converting a spot kick. 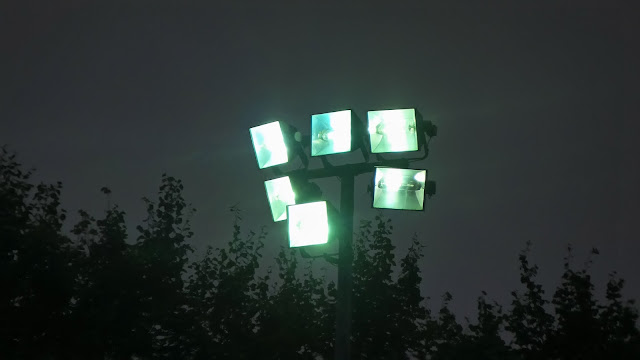 There had been a decent crowd of 459 at the game, the highest of the day. We left Bourne at 9.45 with me dropping Eddie off at Peterborough Station at 10.15. My way home was blighted by dawdling drivers, travelling at a third of the speed limit in some cases as well as gloomy weather outside. I got back at 11.45 and stayed up for half an hour. It wasn't the ideal preparation with me being up for work at 4 am. It had been a good day anyway, with me catching up with lots of people and enjoying three games of football at three nice grounds. Next up for me on Tuesday is the nearest competitive 'tick' that I could find in Andover Town v Bemerton Heath Harlequins. 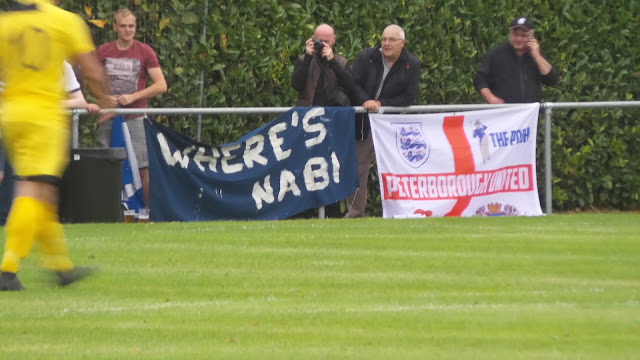 ABBEY LAWN is a smart and well-kept venue that would probably be good enough for a couple of levels higher. All the covered accommodation is on one side and comprises of a seated stand for around 200 and covered standing for around 300. The rest of the ground is open but is surrounded by hedges and trees which give it a pleasant feeling. The best feature is the club shop which has lots of choice at good value prices.

The town is close by, and this offers a very good range of both food and drink options. The best choice for a pre-match tipple is Smiths, an excellent establishment with a great choice of drinks. Food wise, there was a busy chippy opposite the ground. Back in the ground itself was a nice looking BBQ and feedback I had from other hoppers was positive. There was also a bar offering the usual range of drinks.

2: Area around the ground (parking, food/drink, public transport)
Near town, plenty of choice and parking (7)

6: Programme
A thin effort, with lots of adverts, expensive too at £2. Points back for being glossy, and having a free teamsheet (3)

7: Game entertainment
Not a bad game, but not gripping either (6)

10: Club Shop
Well above average for the level, good value too (8) 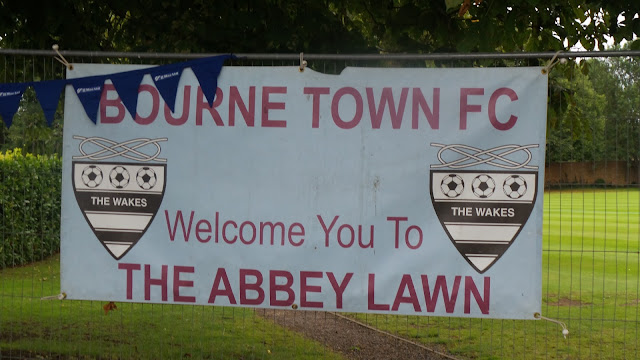 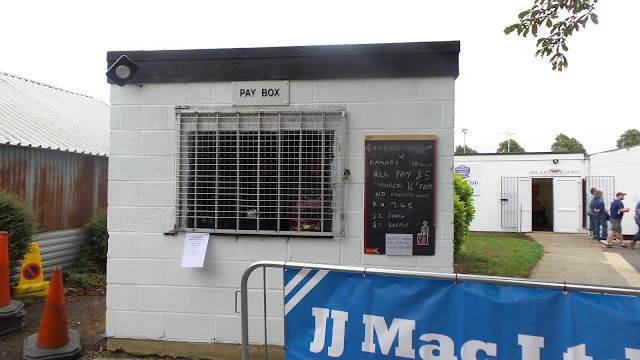 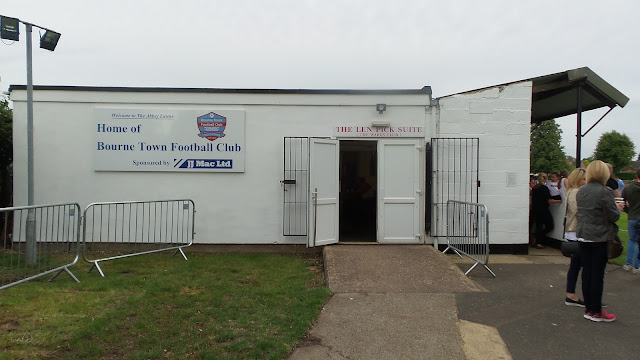 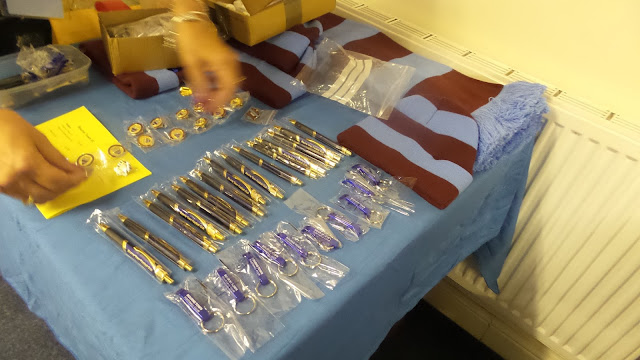 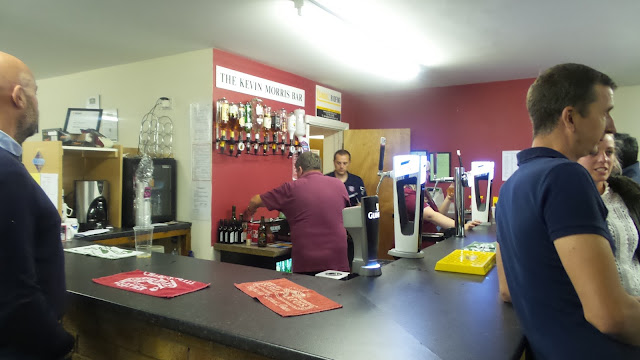 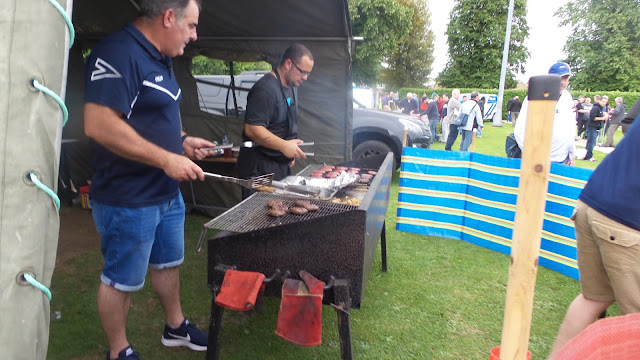 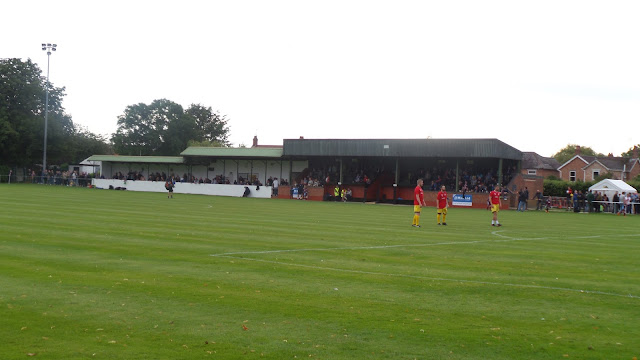 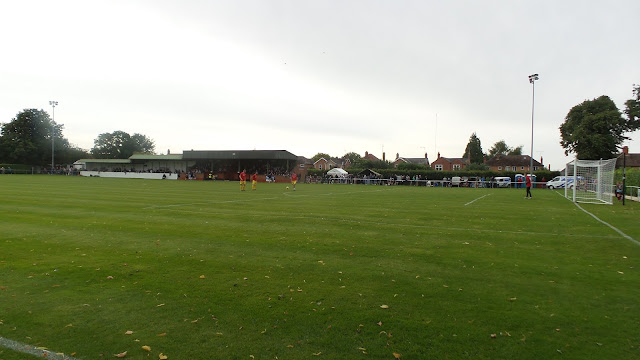 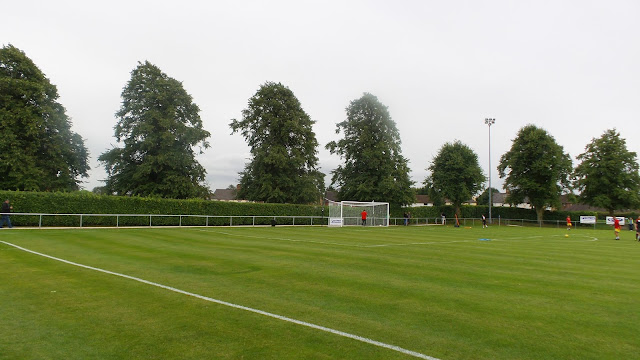 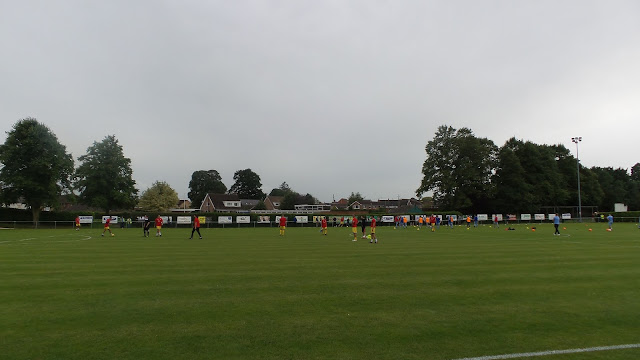 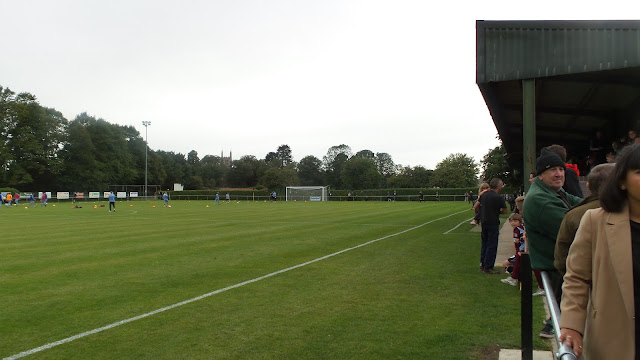 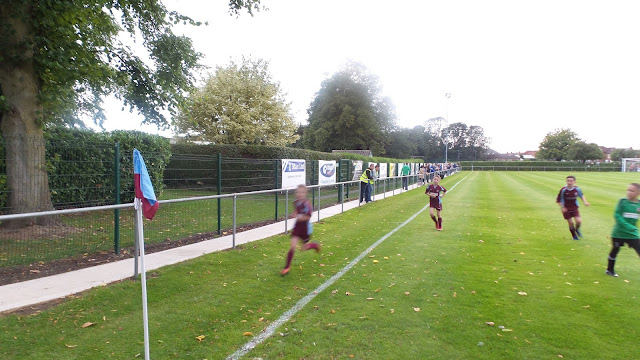 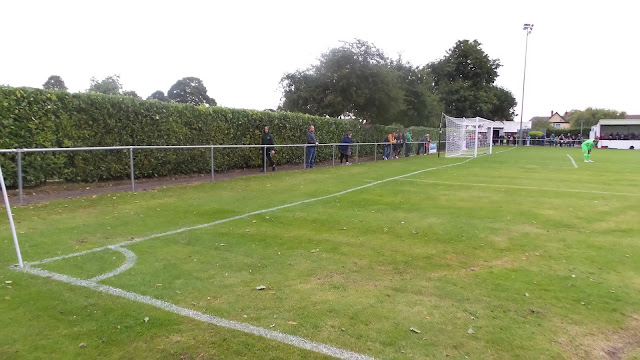