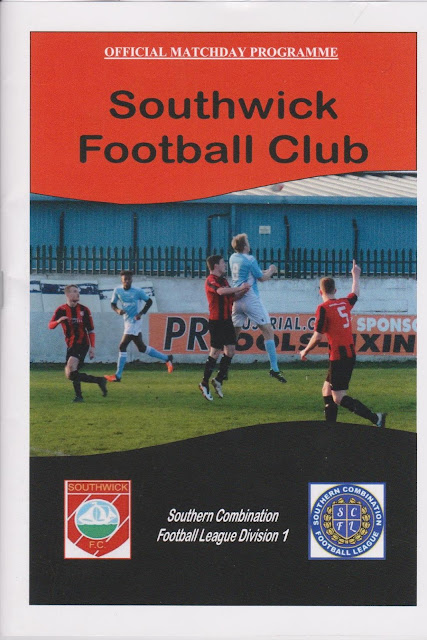 The club was founded in 1882 and played in the West Sussex League prior to becoming founder members of the Sussex County League in 1920. They've remained there ever since, apart from a two-year hiatus in the Metropolitan & District League in the 1950's and a spell in the late 1980's and early 90's when they had a spell in the Combined Counties & Isthmian Leagues. It was during this spell that they enjoyed their best-ever season, finishing 3rd in the Isthmian D1 behind Woking and Wivenhoe Town in 1989/90 which at the time was the third step of non-league football. During their time in the Sussex County League, they have been champions on six occasions as well as being runners-up a further nine times. Recent times have been a lot tougher with the club dropping as low as step 7 of non-league between 2013 and 2015 as they were relegated to Division 3 of the Sussex County League. They were champions in that final season, however, winning promotion back to the newly named Southern Combination D1. After finishing 5th and 11th in the last two seasons, they've endured a slow start to this season with their sole point from three games coming in a 2-2 draw with Little Common.

Southwick enjoyed a great run to the FA Cup 1st Round during the 1974/75 season. After beating Bexhill Town, Haywards Heath, Ringmer & Hayes before losing 5-0 at local Football League side AFC Bournemouth. During their time in the FA Trophy, there was not much success but in the FA Vase, they have reached the 3rd Round twice - losing to Windsor & Eton in 1979/80 and Bracknell Town in 1985/86. Locally they've won the Sussex Senior Challenge Cup on ten occasions, the John O'Hara Challenge Cup twice, the Sussex Royal Ulster Rifles Cup eleven times and the Sussex Intermediate Challenge Cup in 2015. The record attendance of 2000 came against Maidstone United during a 1986 FA Cup 4th Qualifying Round game against Maidstone United. This game was part of a four-game saga which eventually ended when Southwick lost 5-1 in the third replay. 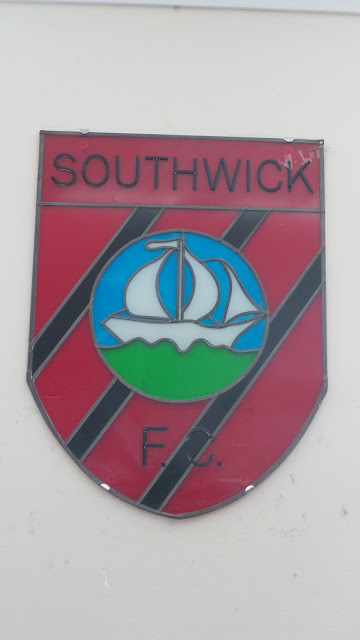 With my usual hopping partners busy elsewhere, I decided that this would be an ideal time to head south. There was plenty of choices for an early 11 am kick off, but the 3 PM and 7.45 pm options were a bit limited with Team Solent the only option in the evening and Shoreham the best option for a 3 PM kick off. For the morning kick off I'd fancied going to Eastbourne Town and Arundel for some time. However, due to wanting to visit a decent looking micro pub before the Shoreham game, I opted for a visit to Southwick, just a few miles from Shoreham. I'd only decided the night before where I was going, so it was a bit of a rush making plans and researching three club histories and as a result, I didn't get to sleep until around midnight. 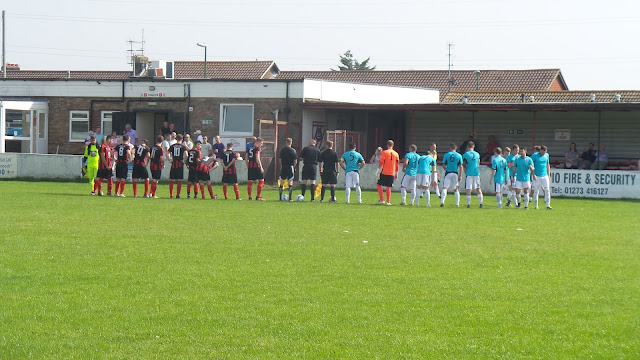 Due to having a large sleep the previous afternoon, I didn't get much shut-eye that night and got up at 7, an hour before my alarm was due to go off. I had a can of Irn-Bru and a jerk chicken pattie for breakfast before getting freshened up and dressed. With the prospect of extra bank holiday traffic, I decided to leave at 8.35 which would factor in nearly an hour for any potential delays. As it turned out, I was fine and even the usually repugnant M25 only had a few minutes delay and that was due to someone shedding a tyre in the fast lane. Thankfully they were safely on the hard shoulder and the few minutes delay didn't bother me. I got to the ground at 10.10, paying a fiver to get in and a quid for what was a very good programme for the price. I went and sat in the bar to read my programme, meeting Lesta Blew Hopper who had also come down for this and the Shoreham game but had already done my late game at Team Solent. I also caught up online and it was nice to have some time to relax before kick off, rather than the usual rush. Around 20 minutes before kick off, I went outside and got some pictures of the ground while I waited for the game to start. 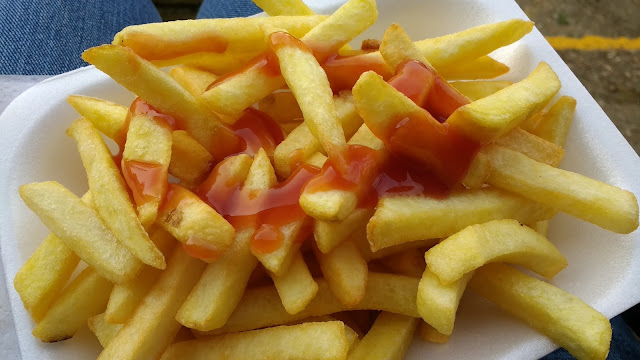 I opted for my usual spot of on the halfway line, between the two dugouts to watch the game from. As you would expect from two struggling teams there wasn't a huge amount of quality on show. The visitors opened the scoring on 13 minutes, a well-worked set piece was met by an AFC Varndeanians player who deftly chipped the ball over home keeper Jason Bridge. There were half chances for both, the best falling for Southwick but visiting keeper Tom Bradford saved well with his legs to deny the striker. At half time I got some chips for £1.50 which were freshly cooked and worth the 5 minute wait. Connah Bradwell-Lowe saw red for the hosts on the hour when he went in hard on Varndeanians keeper Tom Bradford. The referee had been having a good game up to this point, but it looked a booking at most. Southwick were galvanised by their numerical disadvantage and shortly after had a shot cleared off the line by a visiting defender. Despite further chances for the hosts, they couldn't get on the scoresheet and the visitors held on for their first win of the season. 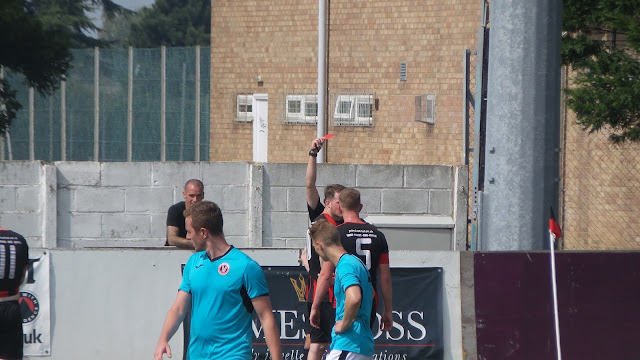 OLD BARN WAY is located in the middle of a residential area, one with a lot of retirement homes, so it's worth checking that you don't park in a disabled place in error, as the car park is really small. As for the grounds, it's delightfully ramshackle and unkempt in parts. The main stand has seating for around 100, has padded seats and although it has supporting pillars, the view is fairly decent. The rest of the ground is mainly flat standing, although there are a few steps of terracing behind one goal. There's an excellent tea bar and also a moderately sized bar which will do the job whilst not being amazing.

4: Value for money
Common sense price of a fiver (7)

9: Bar / Clubhouse
Had its own club lager, Thatchers Gold for cider (6) 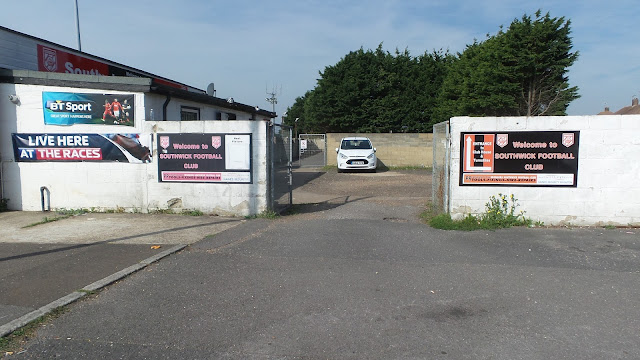 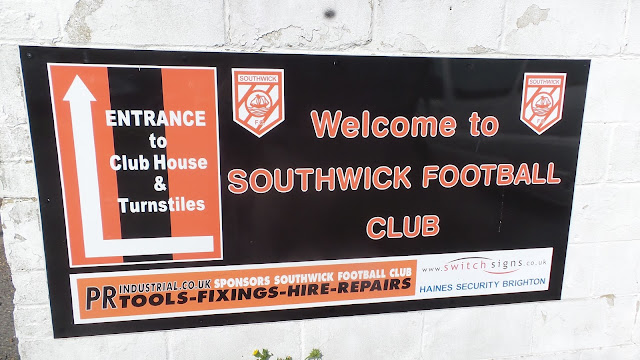 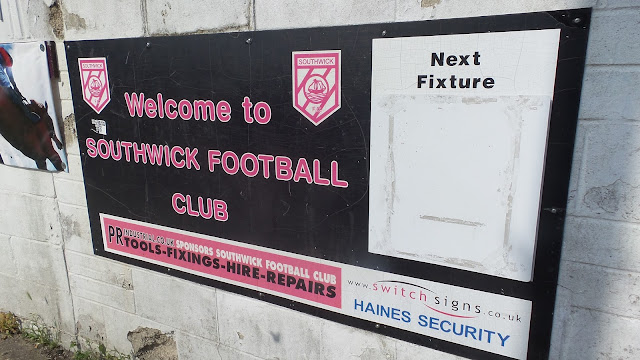 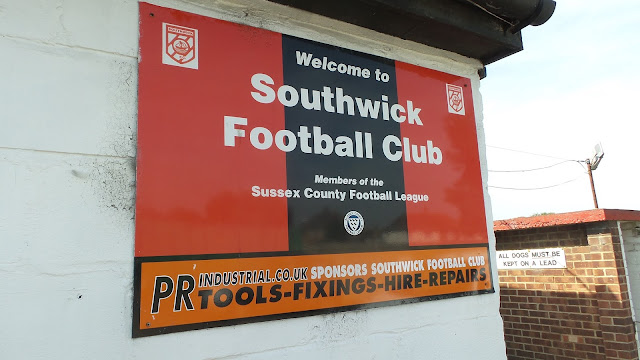 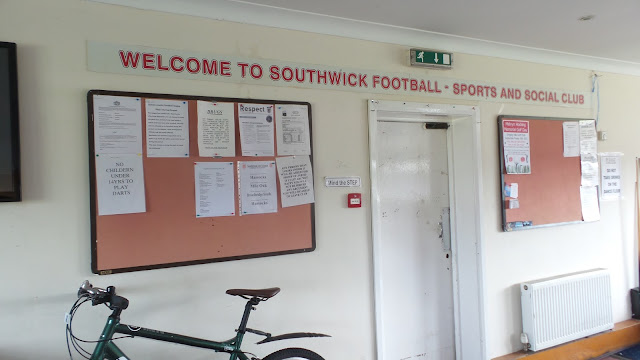 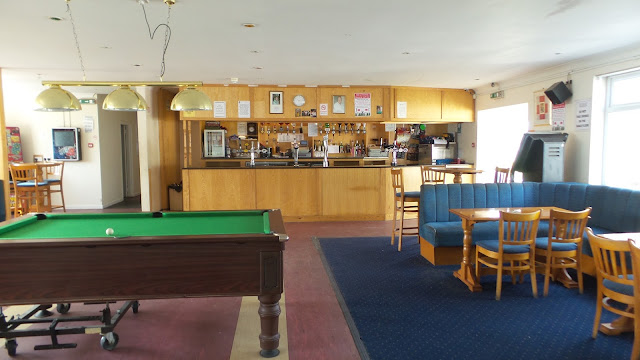 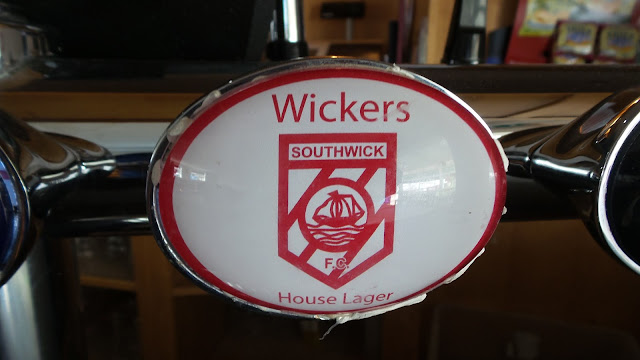 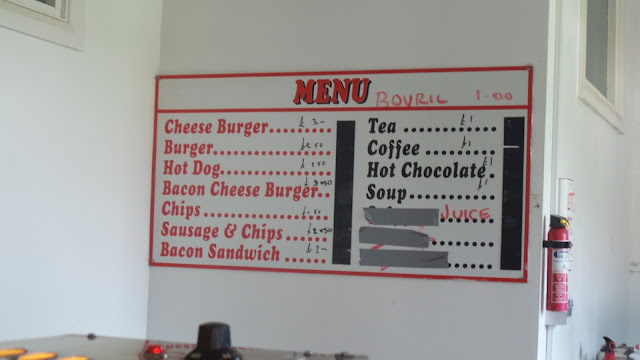 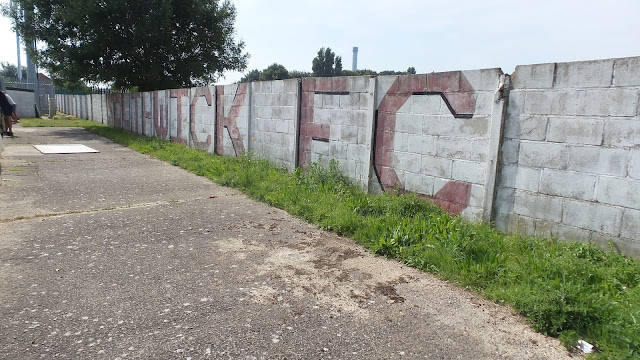 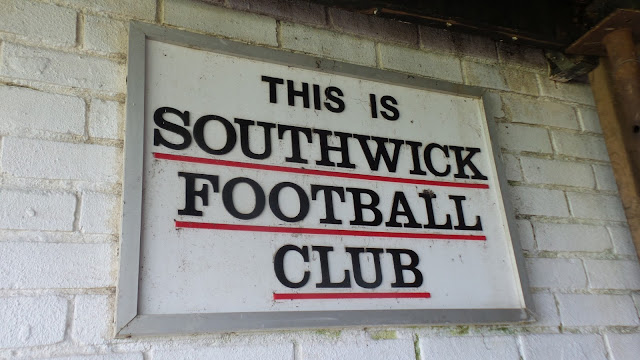 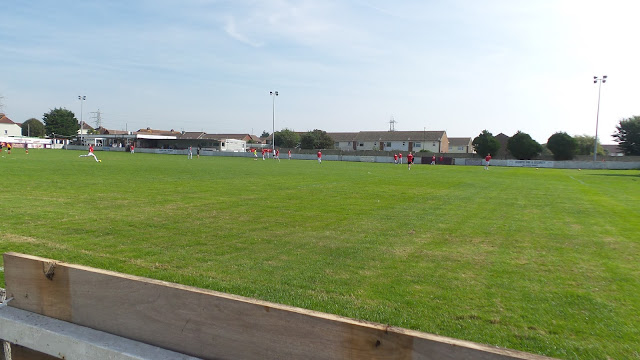 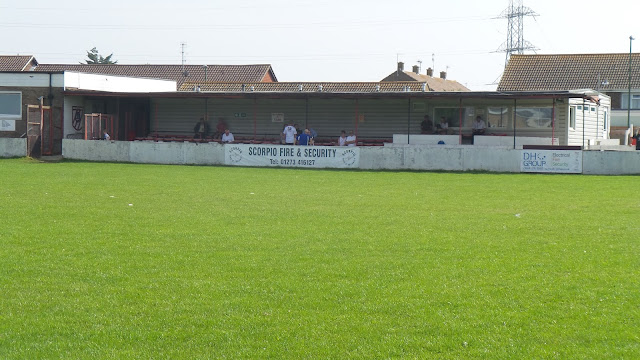 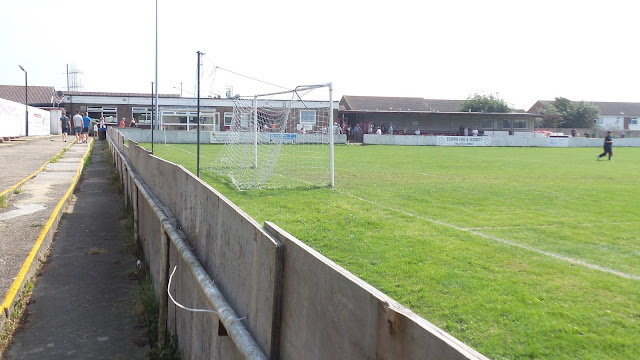 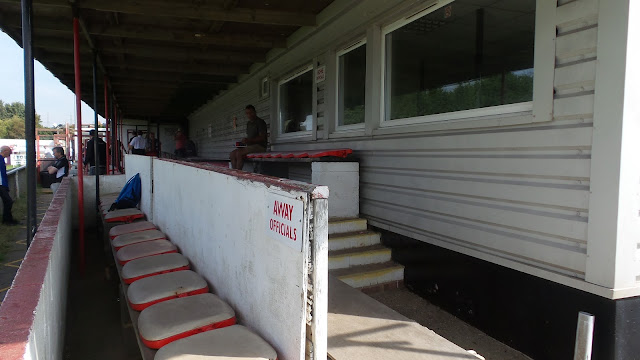 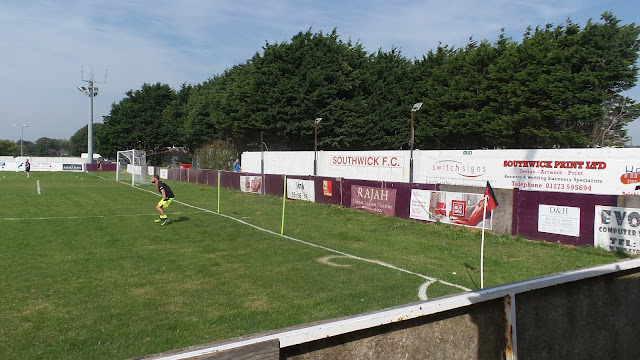 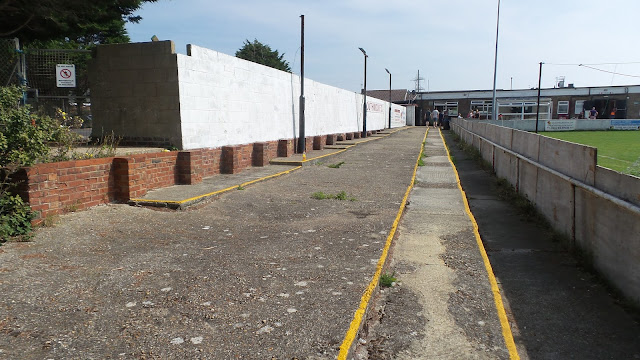 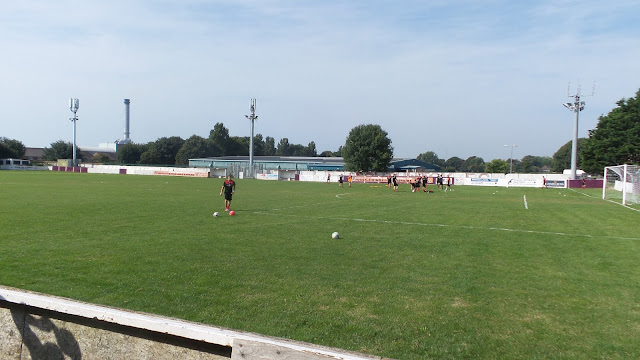 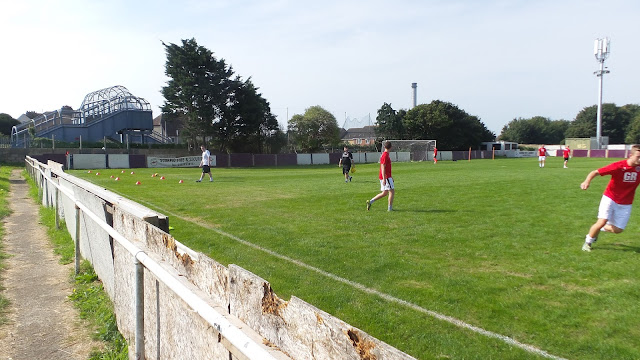