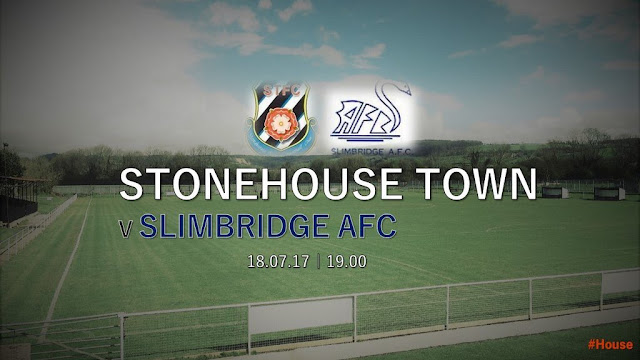 
The club was formed in 1898 and were initially known as STONEHOUSE FREEWAY until a merger in 2007 with their junior side saw them adopt the present name. They currently have four teams at senior level - the first team playing in the Gloucestershire County League and the others in the Stroud League. There's not a huge amount online about the history of the club, but they perhaps enjoyed their best spell in the 1940's and 50's. During that time, they spent time in the Western League, with their highest finish being 6th place in its top tier in 1952. There was also an initial spell in the Gloucestershire County League between 1968 and 1988 with Stonehouse winning the title in their debut season. They then dropped down to local leagues such as the Gloucestershire Northern Senior League. They returned to the league last season and had an excellent return, finishing in 3rd place which was their second best showing ever. There were even hopes of another promotion up to the Hellenic League, but with everything in order at champions Bristol Telephones, they took the promotion spot.

Stonehouse have played in the FA Cup, reaching the 2nd Qualifying Round on seven occasions. They had a singular season in the FA Trophy too, doing well to reach the 1st Round before a 3-0 defeat to Nuneaton Borough in 1969. There was also a spell in the FA Vase in the last 1970's and despite reaching the 2nd Round in their debut season, they then suffered four consecutive Preliminary Round exits. Local honours include the Harry Greening Memorial Trophy in 2011 when they beat Sharpness 5-0 in the final as well as the Gloucestershire County Cup for the first time in 40 years as they beat Charlton Rovers in the 2016 final.

The game that I'd be doing on my 38th birthday was decided during the previous week. After being tired after coming back from Melksham the previous Tuesday, I was looking for something a bit nearer. Stonehouse might not have been as close as I'd have liked, but with a 7 pm kick off due to lack of floodlights, I should at least get home at a reasonable hour. I'd learned of the club when researching what step 8 grounds would be worth visiting at the end of last season. I'd originally planned to visit the ground back in May for a county cup final but was unable to due to my car being in for repair. I'd seen that the club had arranged a number of pre season friendlies thanks to their excellent Twitter and with entry at a bargain £2, it wasn't hard to convince fellow hopper Anwar that a visit would be in order. 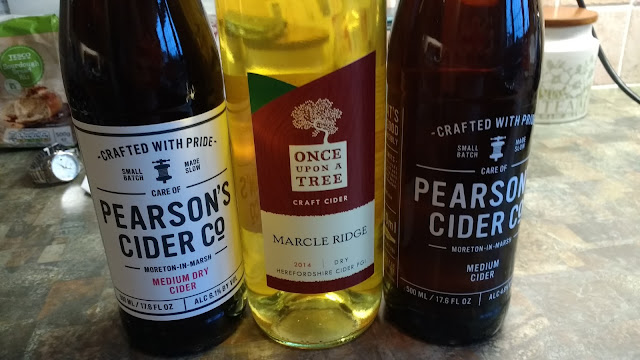 I had a good night on Monday, going out for a birthday meal with the family, so it was annoying when I woke at my normal work time despite it being my day off. I had a lazy first few hours, setting dressed and opening my presents before walking down town. As usual, I got a lift back with my Dad and had a Katsu curry for lunch. I then spent the afternoon resetting my phone and reinstalling the apps after I'd been having some problems with it recently. By 3.30 it was time to leave, with me meeting Anwar in Aylesbury at 4. The journey started OK but we were soon experiencing the all too common delays that come with pretty much every midweek trip. From the Cutteslowe Roundabout to the usual traffic black spot of Witney it crawled, adding another half an hour to my own journey. At least we had some good tunes playing on Jack FM to keep us company and later on the Two Mikes Podcast. The rest of the trip went fine and we arrived in Stonehouse town centre just before 6.30. First stop was the local Co-Op where I purchased some local ciders that I'd not had before, though for the first time in over 20 years I'd be spending my birthday completely sober as these bottles for the weekend. We then went for a wander round looking at the takeaways and after being impressed at uninspiring choice and above average prices, we returned to a place right near my car called Trafalgar Takeaway. There was a reasonable choice and both Anwar & I opted for curry sauce and chips for £2.80. The portion was decent and the curry sauce nice as it tends to be in Chinese owned chippies. We then drove to the ground, arriving 10 minutes before kickoff and parking up in the adjacent car park. 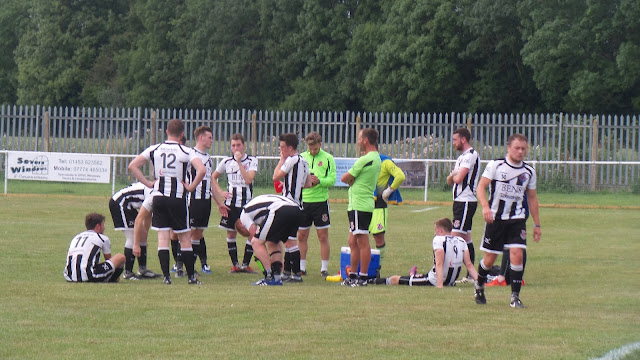 After paying £2 to get in, I went around getting some pictures of the ground, which, as expected, is a good setup for step 7.  The game kicked off and started with visitors Slimbridge in the ascendancy. I'd seen the Southern League D1 South & West side at their own ground last season as they defeated Fleet Town 1-0 in a dull FA Cup replay. Fortunately, this game was a lot more open, but it was the visitors who took the lead on 7 minutes. Marley Watkins played in Joe Stokes who shot superbly on the turn to give his side the lead. However, Stonehouse hit back immediately when Tim Williams finished from just inside the area. The same player gave the hosts the lead on 25 minutes as he headed in at the back post following a cross from the left. They held that lead until half time and despite another spell of dominance by Slimbridge, it wasn't until the final 15 minutes that they showed their higher status. They could have paid the price for their lacklustre finishing as Stonehouse had some good chances on the break but on 76 minutes trialist Joe Wilton equalised with his low shot from the edge of the 6-yard box clipping the left-hand post on the way in. A couple of minutes later Wilton got his second in as many minutes with a shot from around 15 yards, although there appeared to be a head injury to a home defender in the build up. to the goal. Straight from the kick off Stonehouse gave the ball and were immediately punished with  Marley Watkins finishing from 8 yards. Joe Wilton was clear man of the match and followed his father Russ and brother Lewis by signing for Slimbridge after the game following his performance. 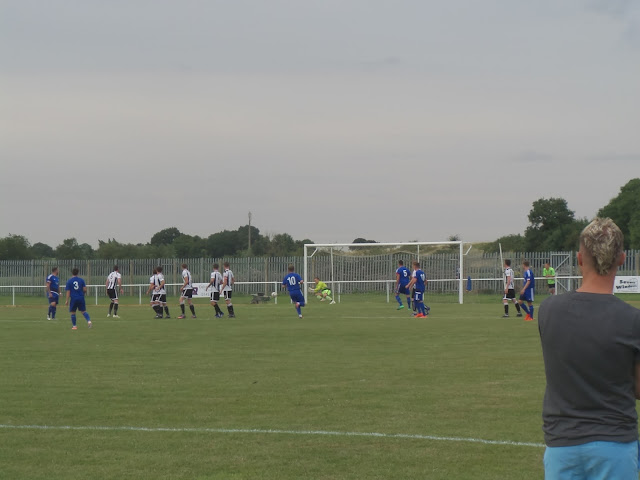 It had been a decent game for a friendly, despite lacking pace at times it was certainly combative with several hard but fair tackles going in. We left at 8.45 and had an immediate delay when we had to wait for a few minutes at a level crossing outside the ground. Apart from a few slow lorries, it was a good journey home, traffic wise anyway. I'd had an inkling of what was to come whilst watching the weather forecast earlier, but there was no sign of what was to come on what was a very pleasant evening watching football. Around 9.15 and for over an hour we were hit by a huge storm. It bucketed down which meant loads of roads had surface water and even floods where the drainage system was unable to cope.  There was also lots of lightning with some forks coming down pretty close to where we were driving. Even so, there wasn't too much delay and I dropped Anwar off at 10:25. Due to the flooding being even worse on the way home, it took half an hour to get back, but at least I was in by 11. I stayed up for around an hour, meaning I got more sleep than usual. I was still tired the next afternoon though and needed my usual nap. My next destination and even day of the game is in doubt and as per usual will depend on my fellow hopper. There's the potential of an extra game at Eastbourne Borough or Andover on Friday, and Saturday is also undecided. If Anwar goes to Aldershot v Wycombe then it will almost certainly be Brentford v Southampton on the train as my Braintree pals will be there. If not, then there are a multitude of games to choose from. 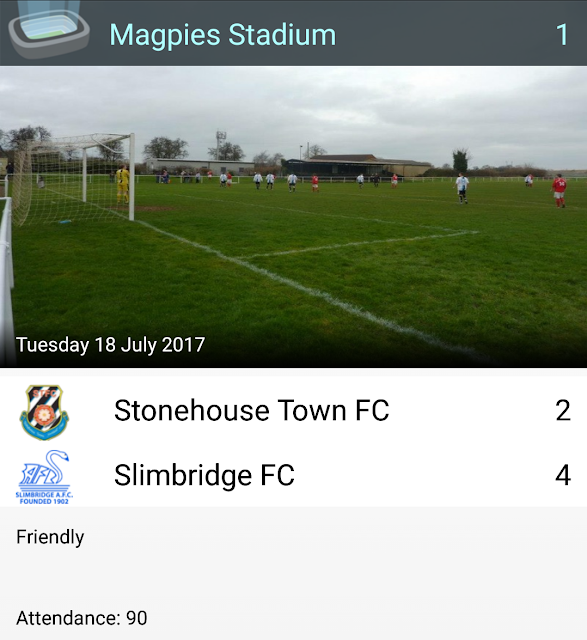 THE MAGPIES STADIUM is an excellent venue for a step 7 team. The pitch is fully railed and has hard standing part way round. There are two stands - one with flat standing for a couple of hundred and a covered terrace along the side for around double that along the side. Aside from sticking a few seats and lights in, the ground would be good enough for any step 5 league. As it is, it's a lot better than a lot of the grounds in the lower tier Hellenic League that they are aiming to reach.

The tea bar at the ground is fairly basic, selling hot drinks and snacks. There's also a bar which is large and offers the usual range of drinks. Further afield, the town is around half a mile away and offers a range of takeaways and pubs. The best bet drinking wise appears to be the Globe In which does real ale and cider, although I didn't visit when I went. Overall, a ground well worth a visit.

1: Ground facilities & condition (for the level)
A great ground for step 7, and well-kept grass verges (8)

2: Area around the ground (parking, food/drink, public transport)
Half a mile from town and lots of parking. Fairly regular bus service (7)

7: Game entertainment
Not bad for a friendly (6)

8: Tea Bar
Not the best range, but acceptable for the level (5) 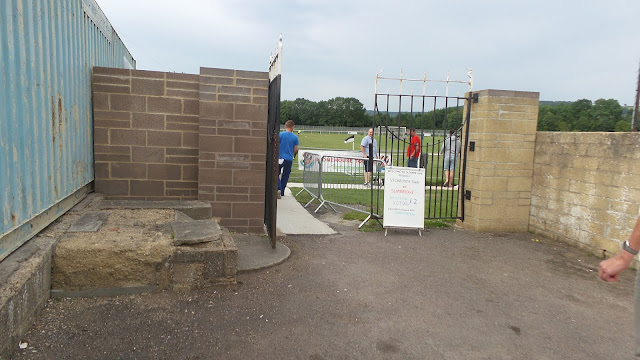 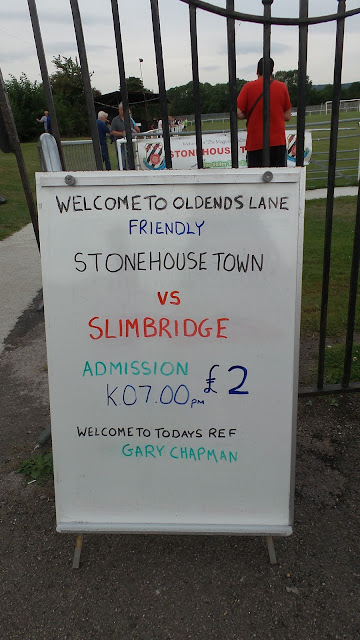 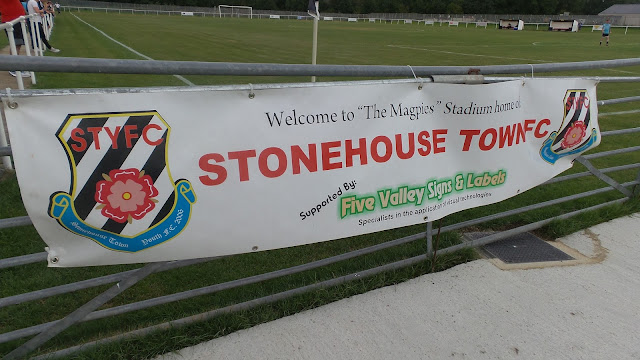 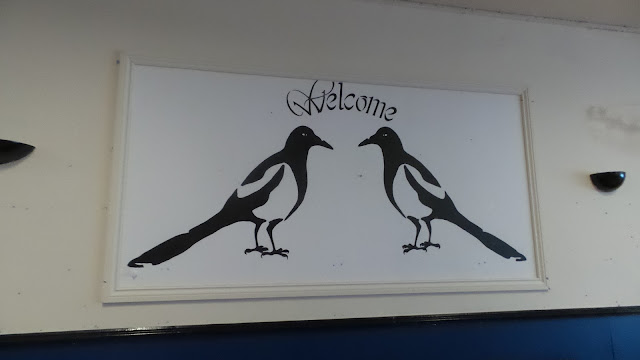 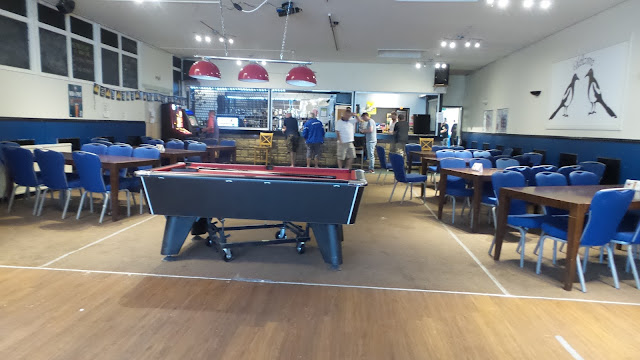 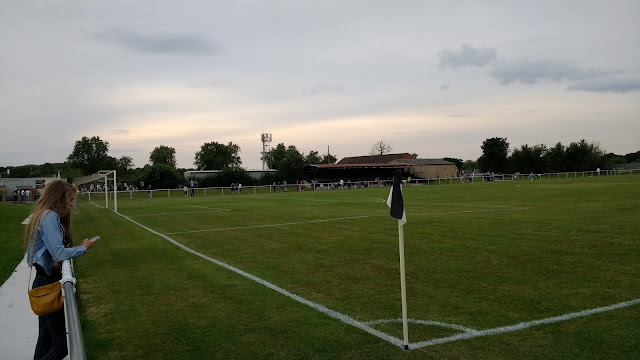 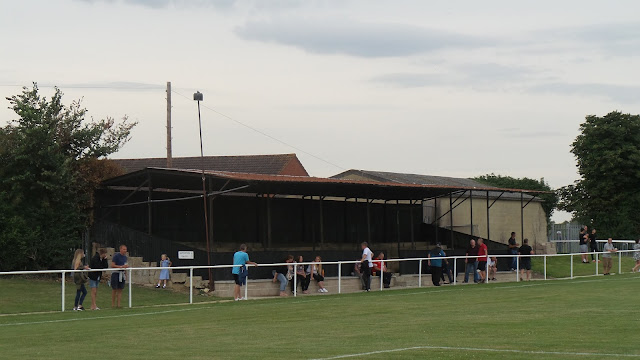 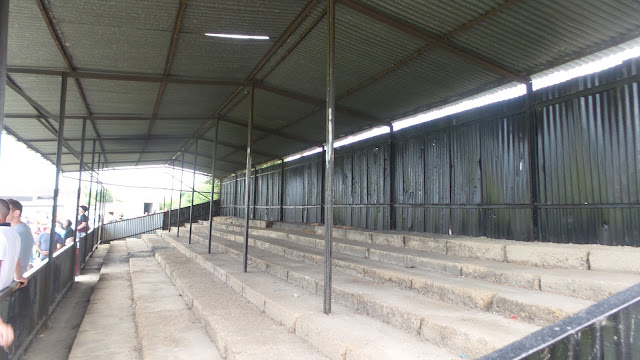 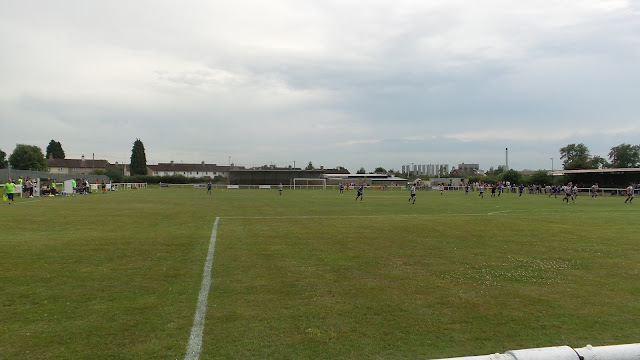 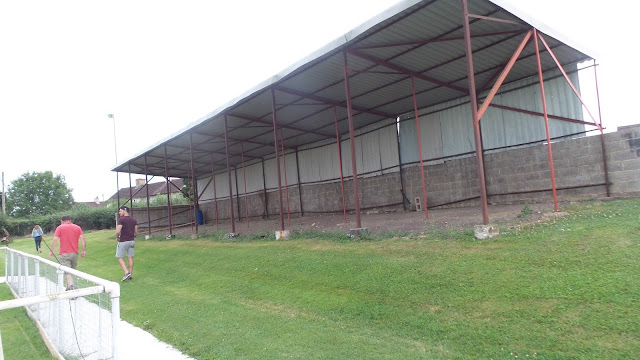 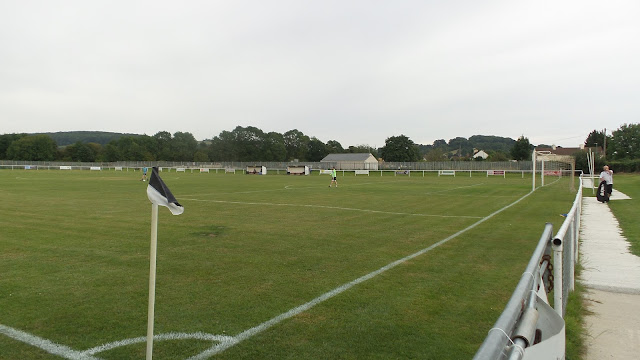 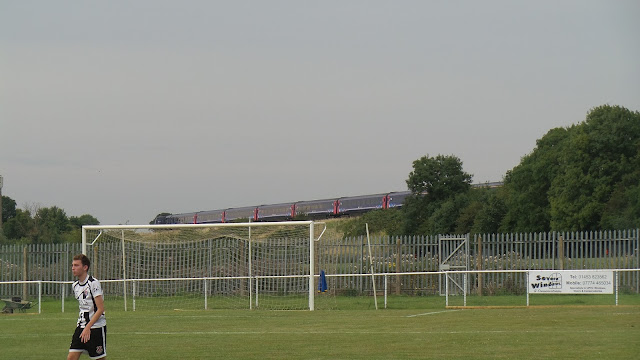 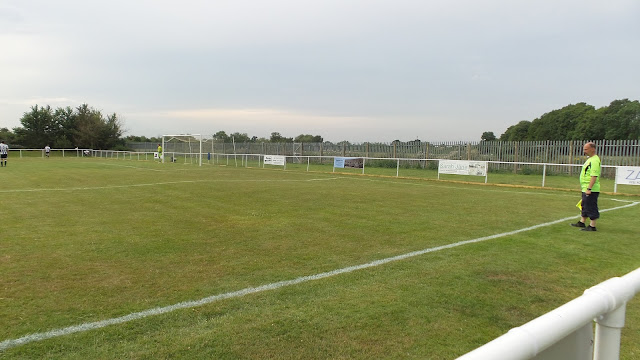 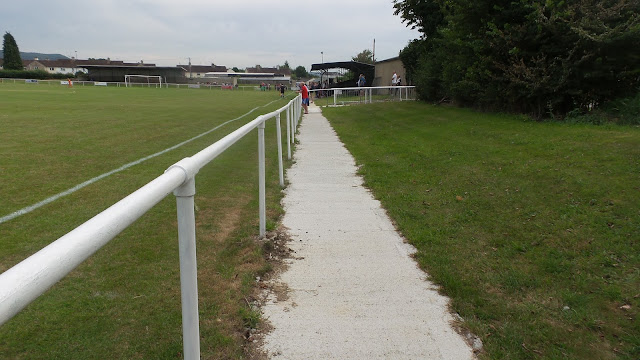