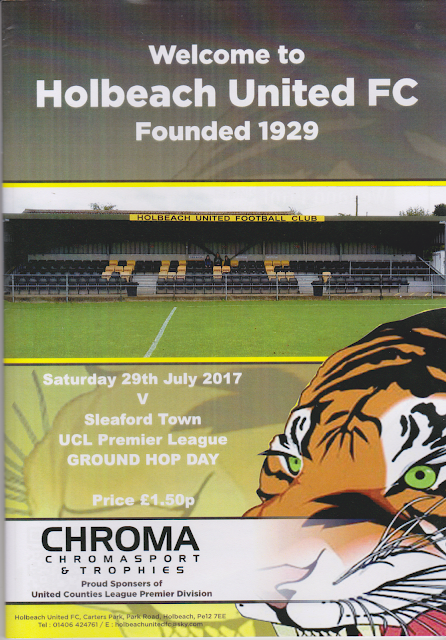 The club was established in 1929 and they started out life in local leagues such as the Kings Lynn, Spalding and the Peterborough & District. In 1946, following the end of the second world war, Holbeach United joined the United Counties League. They've remained there to this day, apart from a spell away between 1955 and 1963 when they played 7 seasons in the Eastern Counties League (best finish of 5th in 1960) and the Midland League (finishing second bottom in 1963). Whilst the UCL was a single-tiered league, the club's best ever finish came in their debut season of 1946/47 when Holbeach finished 8th. Since 1950, they've remained in the top tier and despite finishing in a lowly position a few times, they've never been relegated, making them one of the most consistent teams in the league's history.They've been champions three times - in 1990, 2003 & 2013 as well as runners-up on 4 occasions.

In the FA Cup, Holbeach United had a great run to the 1st Round in 1982. Long Eaton United, Rushall Olympic, Moor Green and Corby Town were beaten to secure a potential tie against a football league side. They were not disappointed, pulling out Wrexham at home. They were forced to play the game at Peterborough United where they bowed out 4-0. There was also a spell in the FA Trophy, with Holbeach never getting past the 2nd Qualifying Round, although they did take 4 games to overcome Hinckley Athletic in their first ever tie. Once the FA Vase was introduced in the mid 70's, the club competed in that instead. They've reached the 5th Round twice - losing to Wisbech Town in 1989 and Erith & Belvedere in 2015. Locally, Holbeach United have won the Lincolnshire Senior Trophy twice, the Lincolnshire 'A' Cup on five occasions as well as the Lincolnshire 'B' Bup and numerous league trophies. 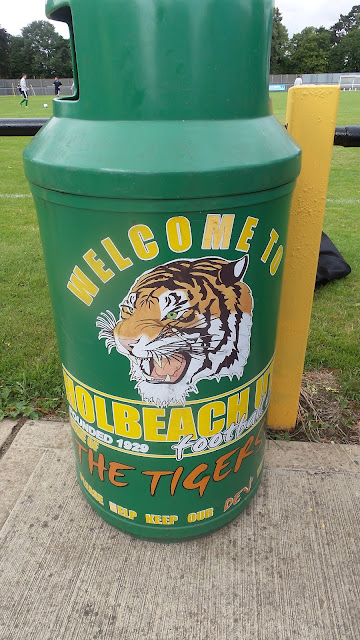 I'd been looking forward to this groundhop for a while, back from when it was first announced. I was glad that the two games on offer in the United Counties League were grounds that I had not done, at least on this Saturday anyway. In the week leading up to the games, I'd seen Wycombe win the Cherry Red Records Cup (basically a glorified friendly) when they beat AFC Wimbledon 2-0 on Tuesday and also put some plans in place for my weeks off. Though I'd been struggling to nail down games in the UK, I had booked a trip to Brussels. This was thanks to me going on the Eurostar site by chance and finding that you could travel for £29 each way. Having paid more than that just for airport parking in the past, it was a real deal and I've always thought that going via train is a far more relaxing way of doing things anyway. I wasn't completely sure of what games I'd be doing, but there was plenty to choose from. Having been to Brussels before around 10 years ago, I'd always wanted to go back, and with a lot of the tourist stuff already done, I'd have plenty of time to take in some games and try some new cherry beers. 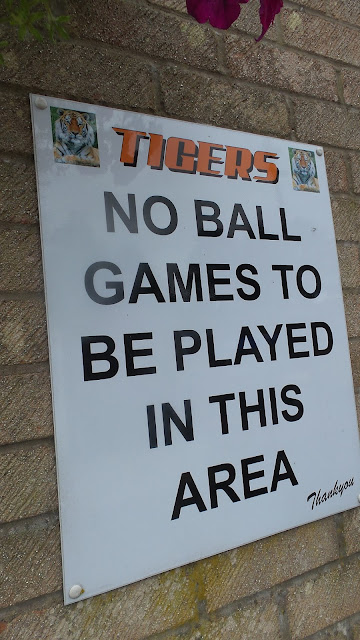 I'd been unsuccessful in my attempts to get Anwar to come with me as he had family commitments. I was glad then, when another hopper, Eddie the Grimsby fan, said he would meet me at Peterborough & was happy to chip in for petrol. The previous night, I decided to stay in, rather than go to Maidenhead United v Wycombe Wanderers, a game I'd been to last season. It turned out to be a good decision, as the hosts won a dull game 1-0. I listened to the commentary on our local radio station, which kept me entertained with a few drinks. I got off to bed, shortly after 10 and at least got a reasonable night's sleep, waking an hour before I needed to at 6 am. To kill time, I watched last night's Coronation Street and caught up online. I saw that there had been plenty of games called off, following an unseasonal bout of heavy rain and my mate Dan had suffered more than most, travelling up to Manchester and seeing both his Friday and Saturday plans ruined. After getting ready, I left at 7.25, filling up my car at the local petrol station. I also needed fuel too, so I stopped at Subway for a breakfast sub. I'd forgotten how good they were and really enjoyed it. I then made my way to Peterborough and as I was early, pulled over for a drink before collecting Eddie from the train station at 9.40. 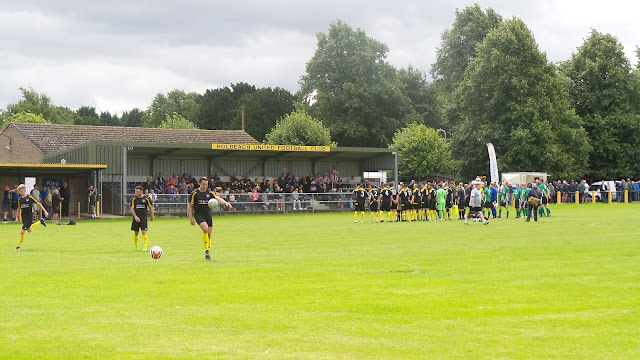 We got to the ground half an hour later, paying £6 to get in, plus £1.50 for a decent programme. I caught up with some other hoppers and took some pictures of what was a very decent ground whilst waiting for kick off. I took up my favourite position, standing between the dugouts on the halfway line and listened to two very vocal managers encouraging their teams in a fierce local derby. The hosts started the better side and took the lead on 13 minutes after a good through ball left Will Bird with a simple finish from around the penalty spot. Despite the Sleaford manager claiming offside, the goal stood and Holbeach continued to dominate. They doubled their lead on 16 minutes when a square ball across the area allowed Lewis Leckie to finish from around 6 yards. The visiting keeper made a couple of really good saves to keep his team in the game just before the break. He was called upon again just before Will Bird got his second and his teams third on 52 minutes as he finished from close range. Nick Jackson made absolutely certain where the points were heading when he headed home from a corner on 55 minutes as the hosts continued to press. There was a brief lull before Charlie Sanders made it 5-0 with a penalty on 83 minutes before a deflected own goal made it six a couple of minutes later. That was it as far as goals were concerned, it had been a comprehensive victory. Sleaford must have been sick of the sight of me, last time I saw them was at Leicester Nirvana where they lost 7-0. 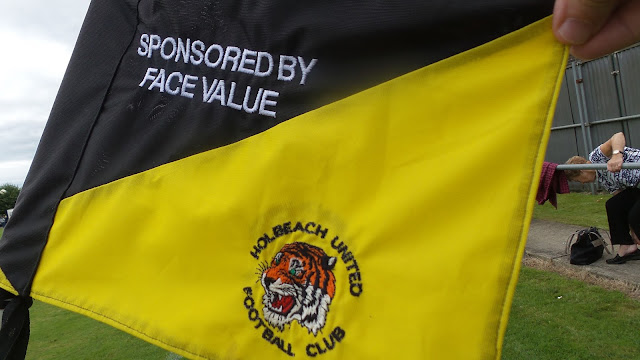 CARTERS PARK is a smart venue for step 5 football and would have no problem holding its own at a higher level. The seated stand holds 200 fans and is decked out in black seats with 'HUFC' picked out in yellow letters. Next to this is an area of standing cover, and there are also small areas behind each goal. This standing cover amounts to around 500, whilst the ground has an overall capacity of 2000.

The club shop is one of the best I've seen at this level. They did pennants, scarves, badges, old programmes, old shirts and many other things. The bar area was smart and spacious and offered the usual range of drinks. The only disappointment was the catering - I saw a few bought in vans, so with no profit going to the club, I wasn't going to put any money in their pocket, especially as it was standard football fare.

1: Ground facilities & condition (for the level)
Very good, well above average and well kept too (7)

2: Area around the ground (parking, food/drink, public transport)
Near to the town, lots of parking (7)

3: Welcome / Club Friendliness
A nice welcome at the gate and friendly people (7)

4: Value for money
£6 is around the standard price at this level (7)

5: Social Media & Website
Both are regularly updated and are good at interacting (8)

7: Game entertainment
A bit one sided, but lots of chances and a good pace for the most part (7) 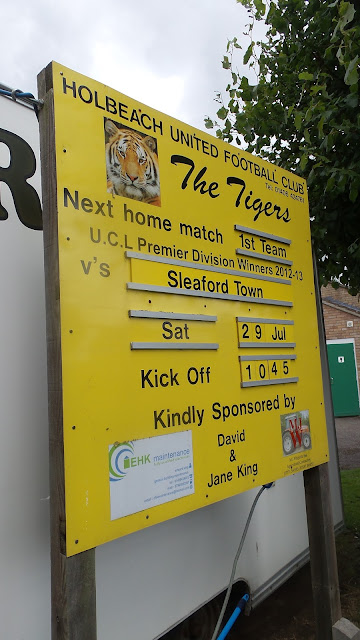 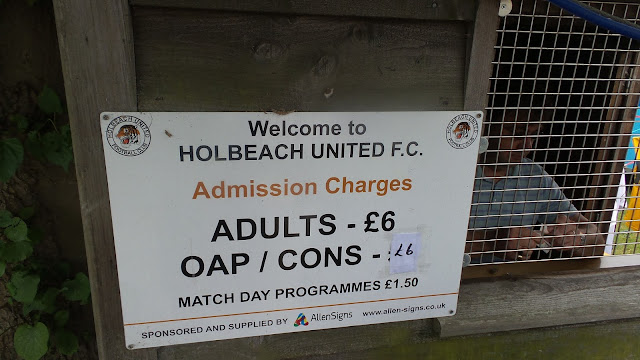 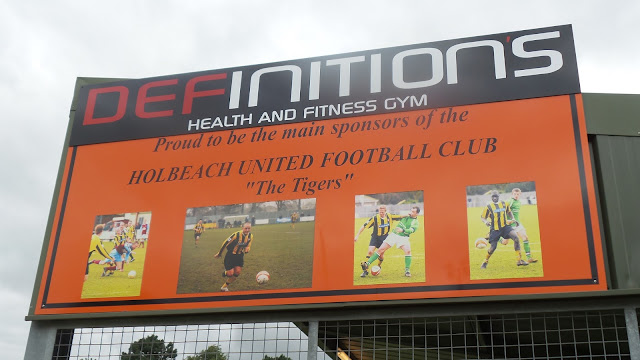 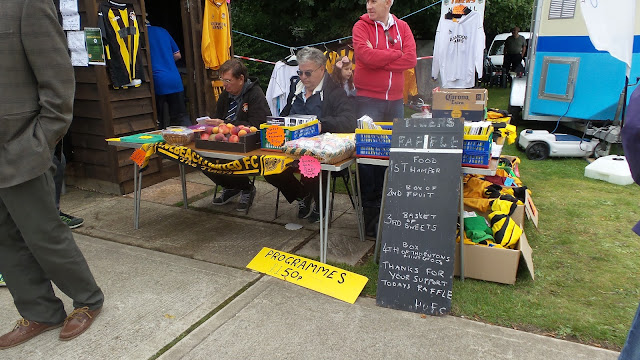 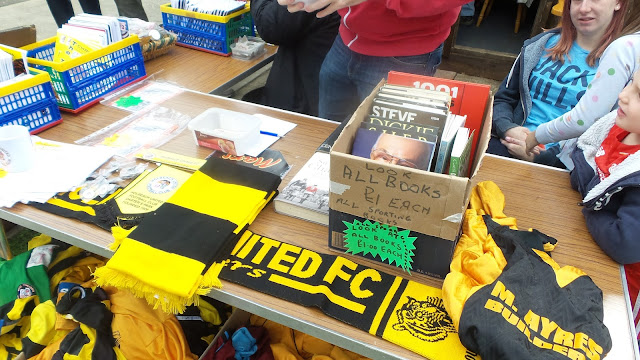 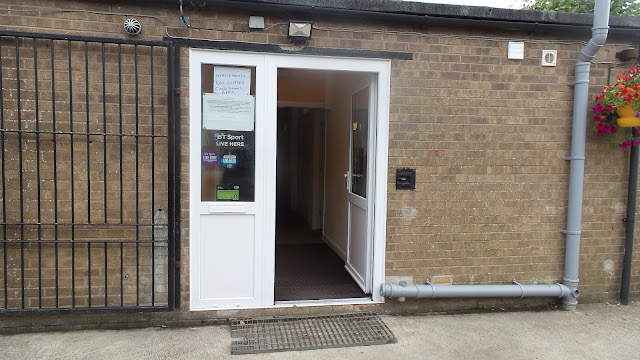 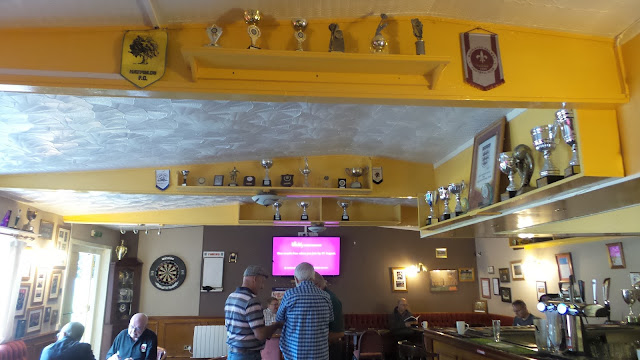 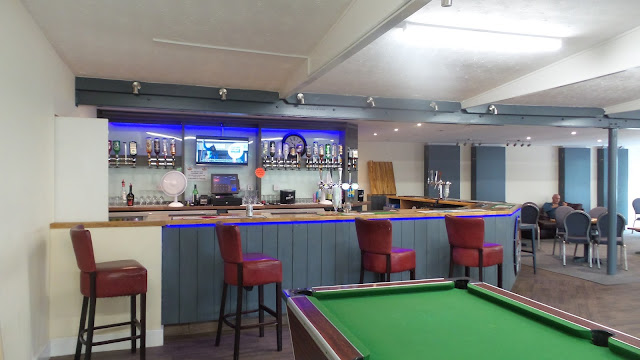 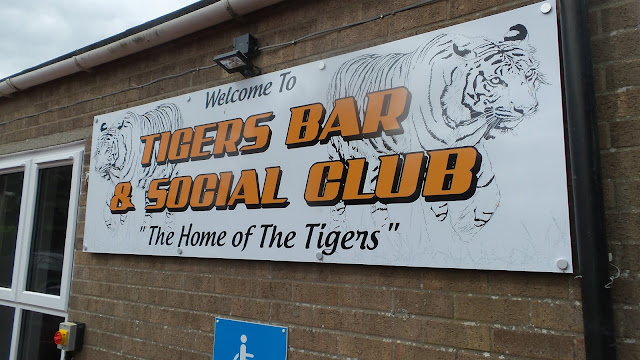 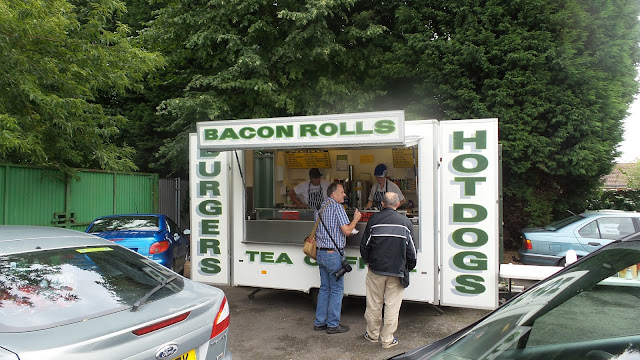 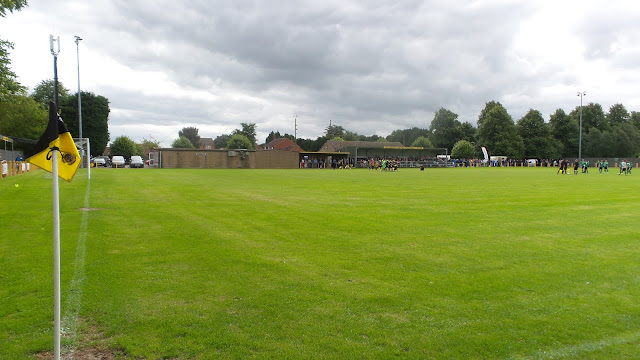 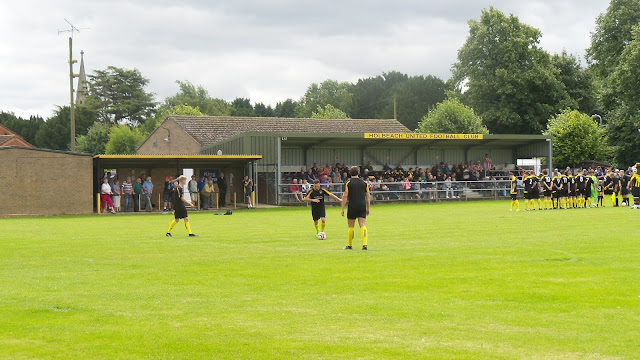 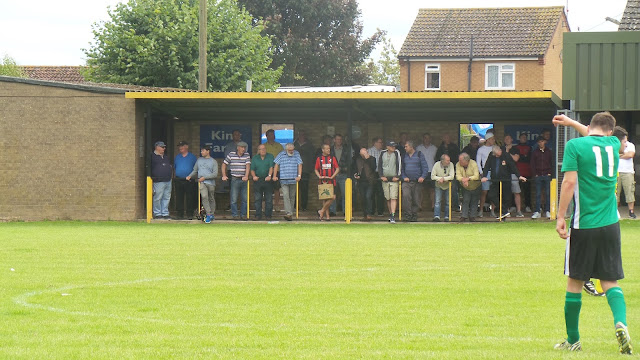 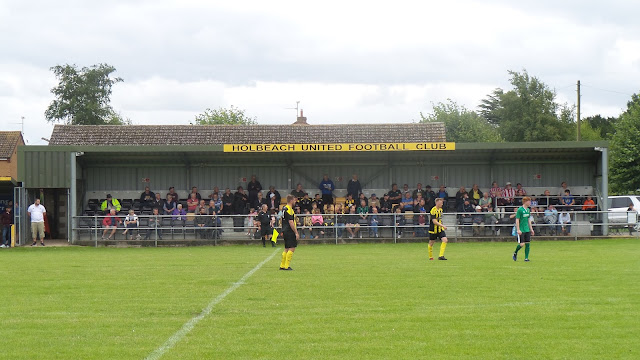 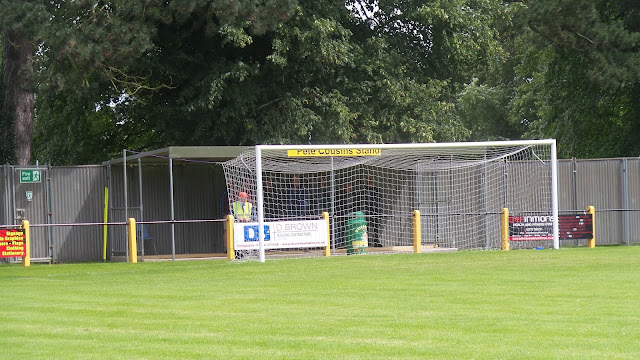 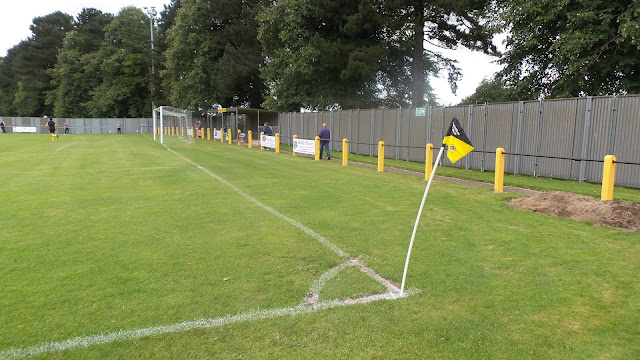 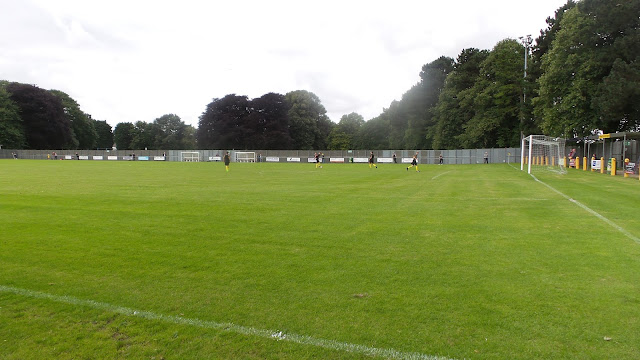 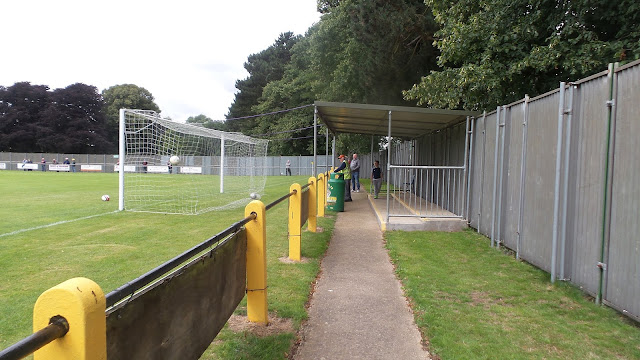 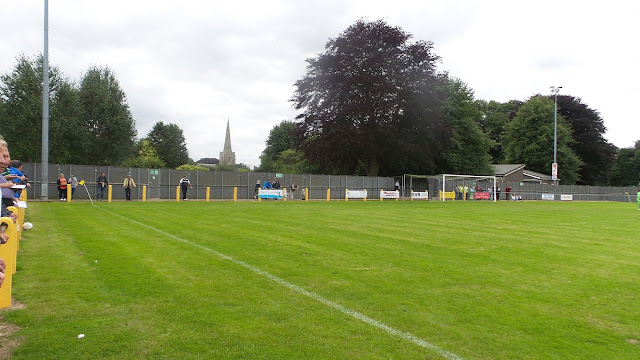