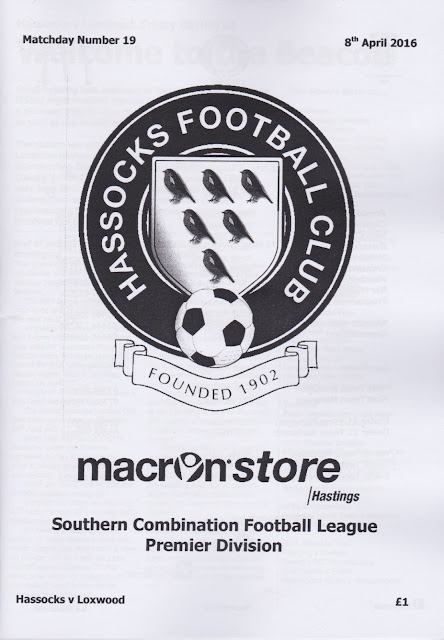 HASSOCKS FC was formed in 1902. After playing in local leagues for much of their history, they made the step up to senior football in 1981 when they joined the Sussex County League. Starting in Division 2 they did fairly well, never finishing anywhere near the relegation places. However, due to ground grading, they were relegated to Division 3 in 1987. The relative success continued at the lower level, however, it took them until 1991 to get promoted back with the needed upgrades in place. The upward trend continued and by 1995 a runners-up spot behind Mile Oak was enough to earn them promotion to the top tier of the Sussex County League. They've remained there ever since, therefore being one of only a few teams never to suffer an on-field relegation in the league. Their best ever finish came in 2012 when they finished in 4th place. They were not going to match or better it this season, with them sitting in 13th place in the newly named Southern Combination.

In the FA Cup, their best season came in 2001/02. Ashford Town & Ash United were beaten in the first 2 rounds to set up a tie with Bromley. Incredibly they won this 2nd Qualifying Round encounter 2-0. They lost in the next round with a 3-1 defeat at Lewes to end a memorable run. The FA Vase has produced a reasonable if unspectacular record with the 2nd Round being reached on a number of occasions. Famous people to live in Hassocks include Jonathan Pearce who is also chairman of their junior sides. The village is also home to Raymond Briggs, author of the children's book 'The Snowman' 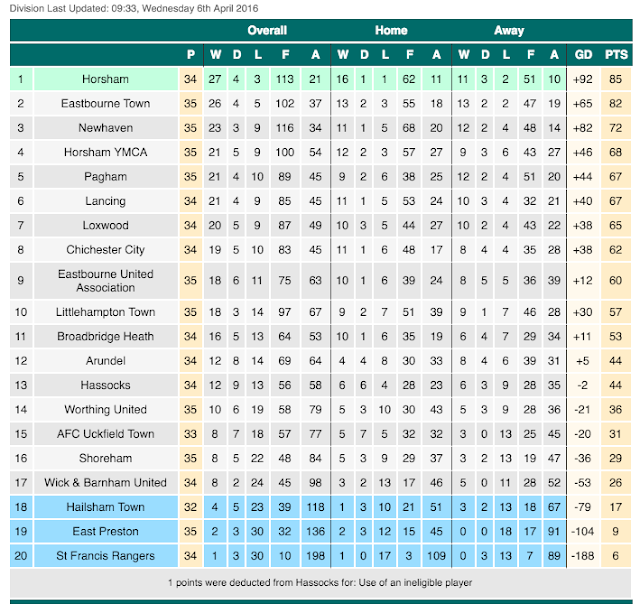 It was time for my weekly dose of Friday night football, with getting to a game even more of a priority tonight, seeing as my parents were going out and I'd be sat at home on my own otherwise. Originally I pencilled in a game at Thetford after the Eastern Counties League announced a batch of fixtures earlier this year. But with my usual travel companions either unavailable or unsure, I decided to look a bit closer to home. The nearest unticked ground I could find was Hassocks, around 80 miles away, which was just about manageable cost wise on my own, especially as they were only charging a fiver to get in. On the day of the game I was working as per usual, however, it's been a lot less busy lately and I was out by midday. I came home for lunch and had a bath before spending a couple of hours at home. I did consider driving down to Hassocks early and getting the train into Brighton. However, I decided to stay in for a bit longer. It turned out to be a wise move. My Barrow supporting mate Lewis gave me a tip for the 2.50 at Aintree and it turned out to be a good un. I only had £3 in my account but £1.50 each way on Native River netted me £16.50. I then had a go at reading the form myself, sticking £3.25 each way on 'God's Own' in the next race. For once my luck was in and I was £62 up for the day. 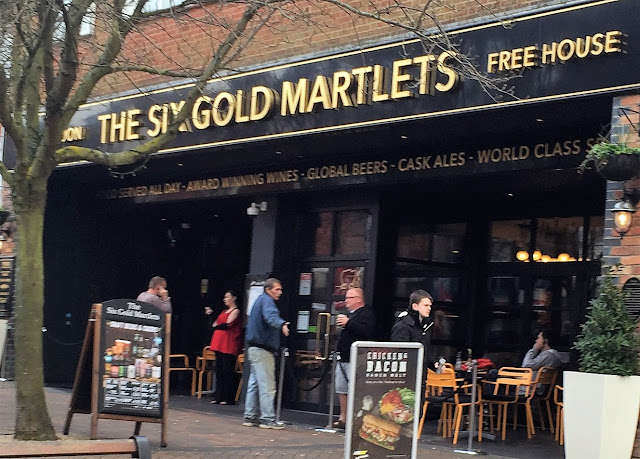 One thing that did not change was the poxy M25. After making initial good progress on local roads and the M40 I was queuing as soon as I hit the worlds worst road. It didn't ease up for 15 miles and there were further slow spots. 40 minutes delay was endured all told but by 5.25 I was in the leafy town of Burgess Hill where I planned to visit the local Wetherspoons. I found a nice free spot for parking and walked 5 minutes to The Six Gold Martlets. It was not one of the better ones in the chain having no real cider but it did the job. I had a pint of Strongbow Dark Fruits with my Chicken Burrito meal deal for £7.10. It wasn't the best presented either, but it tasted as good as ever so my 75th 'Spoons' in the chain gets 5/10. From there I went to Iceland to get some Irn Bru cans from Iceland and some Jaffa cakes from Lidl before driving the few miles to the ground. I arrived at 6.30 and as the gate was not yet open I sat in my car. About 20 minutes later everything was ready and I went in. The club had very kindly gifted me free entry and so I wanted to spend something in the ground to make up for it. I got a programme for £1 and had a go on the raffle too. Later on, I got a bottle of Magners Pear cider while I waited for the game to start. I also read the programme which although in black and white, was well printed and had lots of stats and a fair bit to read in it. 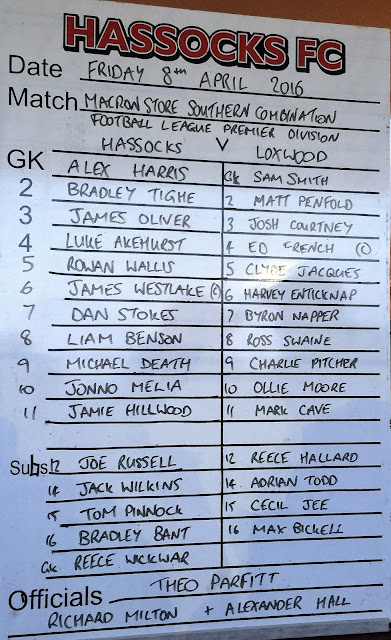 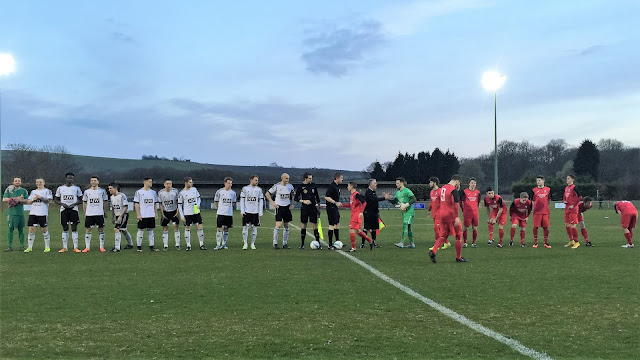 The game kicked off on an excellent pitch considering the time of year and I chose to stand on the clubhouse side between the 2 dugouts for the first half.  It started off with Loxwood running the show but soon enough the hosts produced the first real chance of the game, forcing visiting keeper Sam Smith into a couple of smart saves. It was a first half of few clear cut chances and therefore it was no surprise when it was goalless at the break. Eventually, the deadlock was broken on 55 minutes, the ball broke and fell kindly for Charlie Pitcher to give Loxwood the lead as he slotted neatly into the bottom left-hand corner. What followed was a period of dominance for the visitors but they couldn't make it count. Towards the end, Hassocks started to make some chances of their own but it turned into a typical end of season encounter with neither side creating anything of note. The journey home was good with no delays. I was back home by 11 and I typed my blog whilst watching Coronation Street before going to bed at 1am. 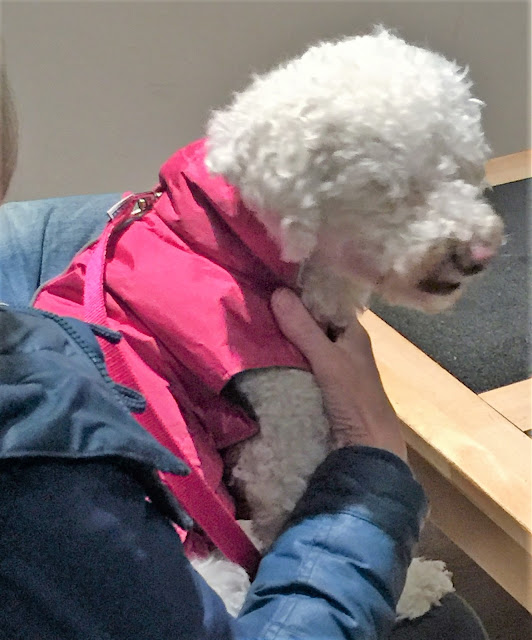 THE BEACON is a tidy ground set in the countryside with greenery all around making it a very nice place to watch football. The main covered area is the seated stand which holds over 200 people. Opposite there is a small covered area for around 100 fans while the rest of the ground is open though there are a few benches dotted around.

The ground is around 10-15 minutes walk from town but the food at the ground is excellent with a wide range at great prices. The bar has the usual range of drinks and does the job at a fair price. Both of these facilities are in a smart building big enough to cope easily with the sort of crowds they get. 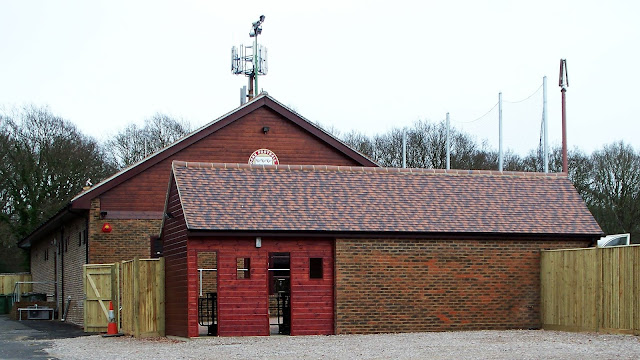 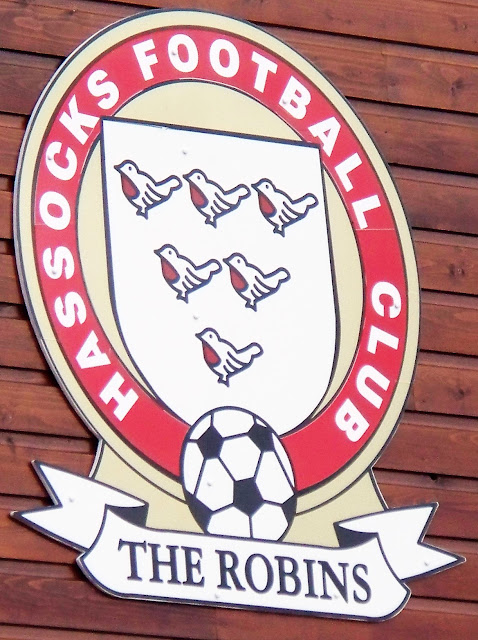 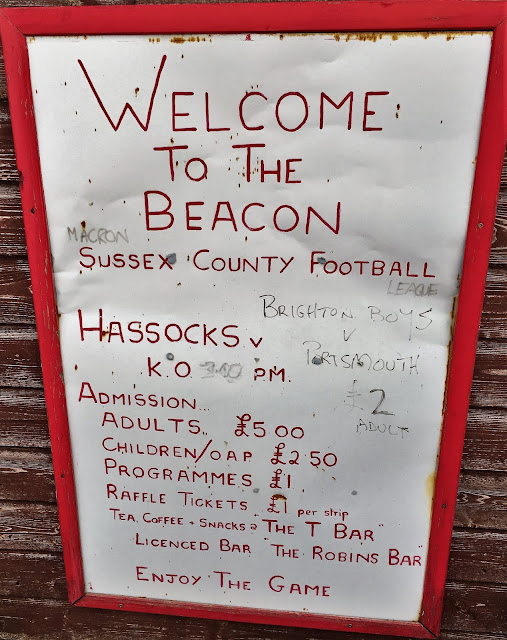 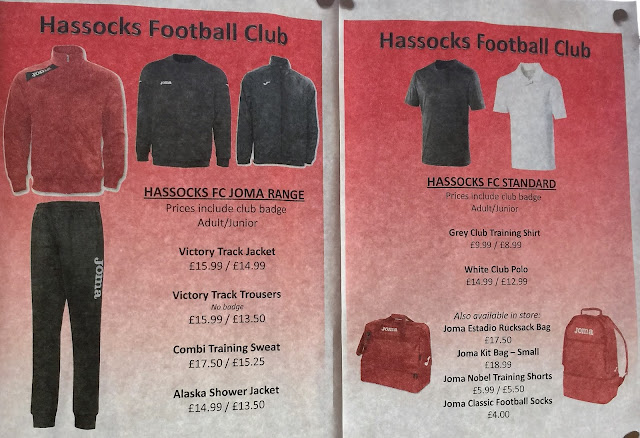 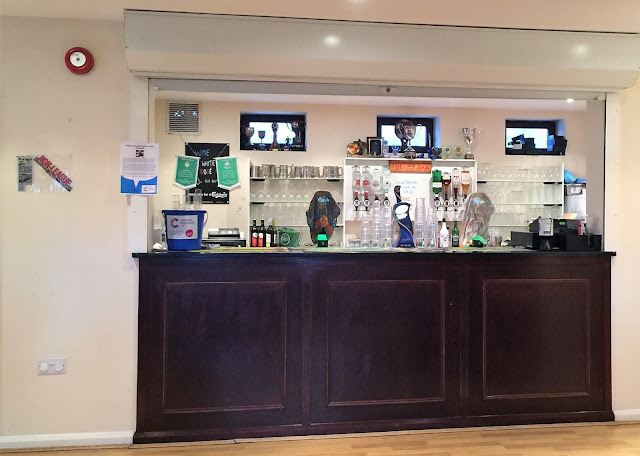 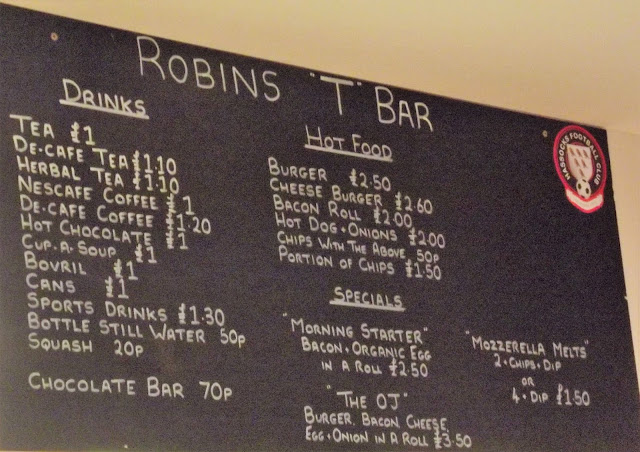 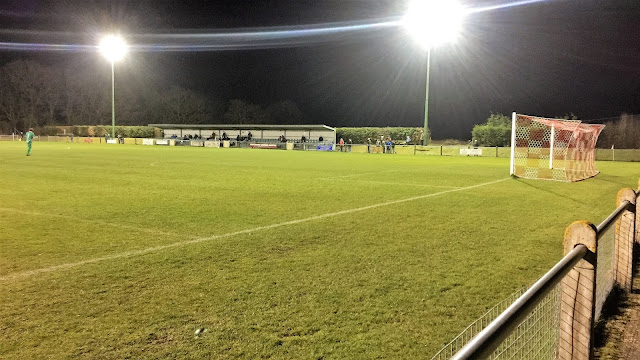 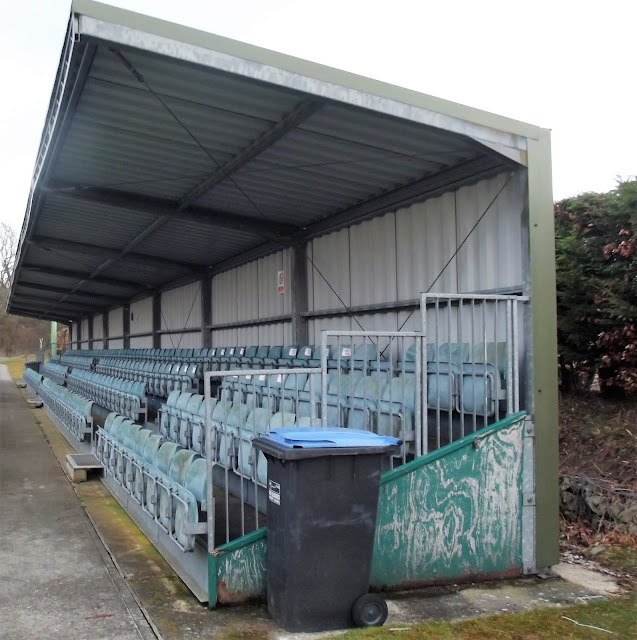 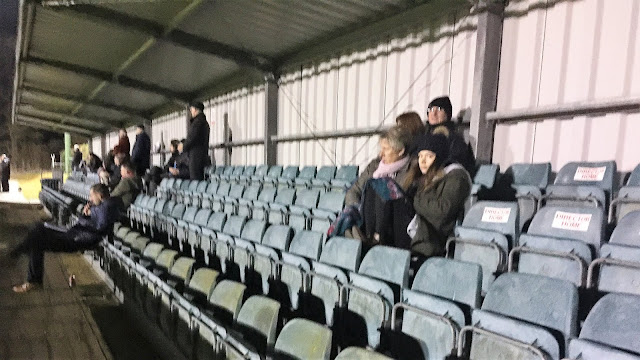 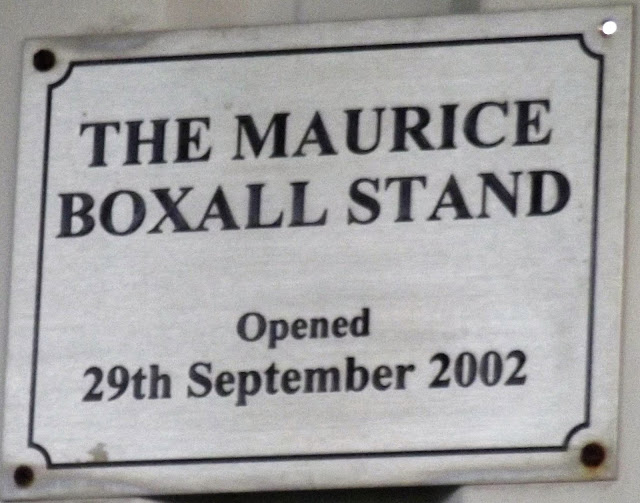 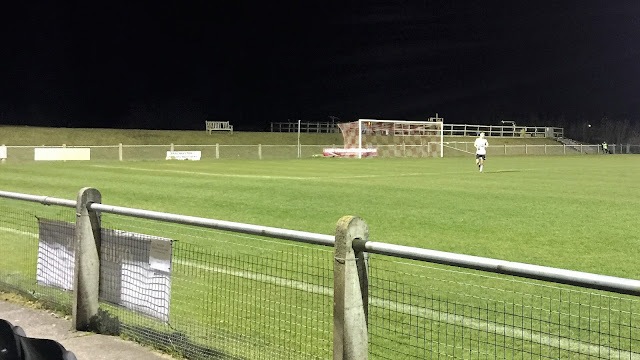 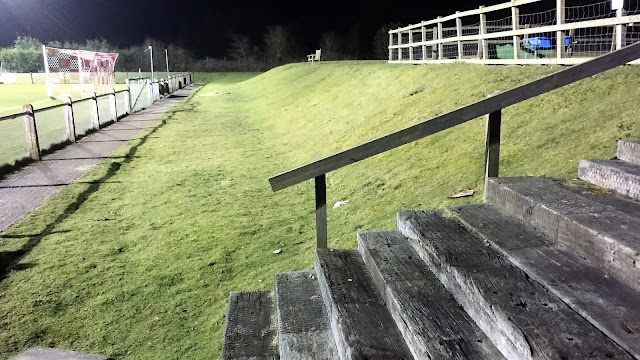 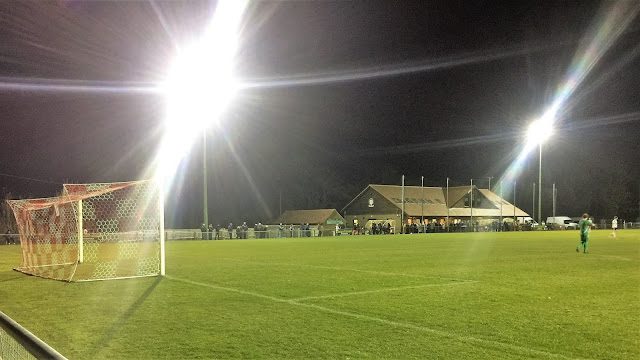 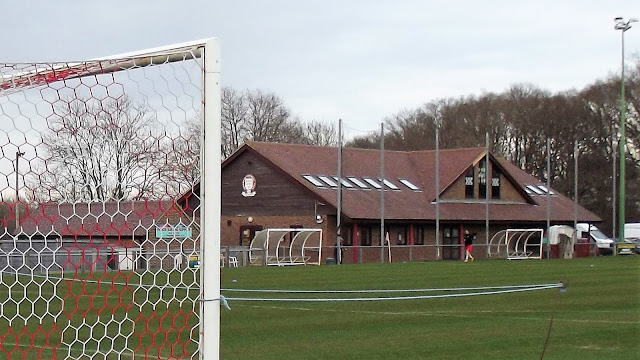 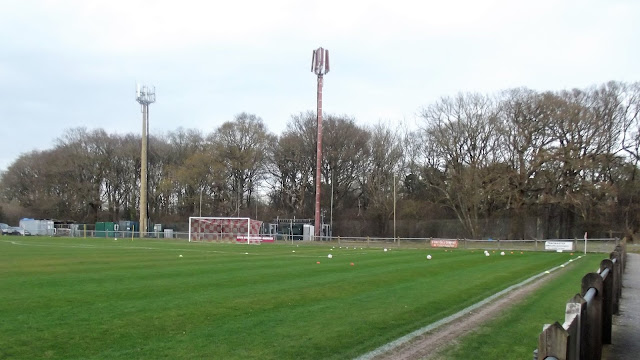