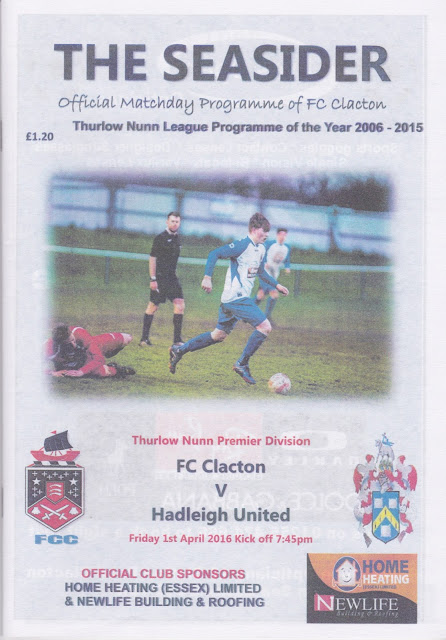 FC CLACTON (who were known as Clacton Town up until 2007) had their best times in the late '50s and early 60's when they were in the Southern League. The 1960-61 season was their best as they finished 13th in the Southern Premier. Apart from those 6 seasons, the club has been long term members of the Eastern Counties League, joining in 1935 when it was formed and playing there right up until the present day. Most of their time has been spent in the top division with them achieving runners up spots in 1965 and 1975. In recent years times have been tough, though not as bad as 2005/06 when they registered just a single point all season. They still were not relegated however as other clubs left for pastures new. They gained 38 points the following season, but this time the trapdoor did open as it was only Halstead Town keeping them off the foot of the league.  It took them 3 seasons to get back up but since 2010 they have been unbroken members of the Premier Divison twice, with a best-ever finish of 15th since returning. They look set to end their hoodoo this season, however, sitting 9th at the start of the game.

In the FA Cup, the clubs best season was the same season as their best ever league placing. In 1960-61 they reached the 1st Round before a 3-1 defeat to Southend United, including a notable victory over Cambridge United in the last qualifying Round. Despite limited success in their few seasons in the FA Trophy, the FA Vase has proved a happier hunting ground. They've reached the 4th round twice, most recently in 2009 when a disappointing 4-0 defeat to Christchurch ended their run just as the competition neared it's final few rounds. In terms of local cups, recent wins include the East Anglian Cup in 2000 and the Eastern Counties League Cup 2 years later. The town of Clacton itself is more well known for being a seaside holiday destination, though it's stock has fallen in recent years due to the rise of foreign holidays. Famous people to come from the town include singer Sade though it is also quite well known for having one of the few elected UKIP MP's in the country in Douglas Carswell. 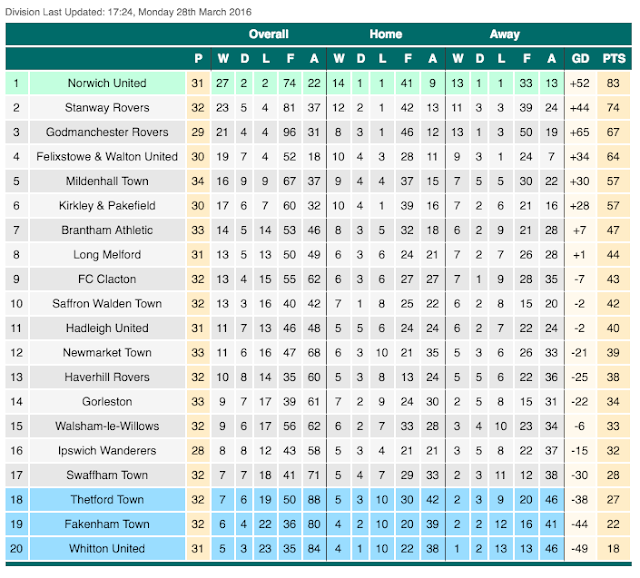 As always I looked forward to a bit of Friday night football, and once more the Eastern Counties League were obliging. Even more obliging were Hadleigh United who as well as being hosts when I visited earlier this year had also been the visiting team on a number of occasions. This was no mean feat as the rush hour traffic could be a right pain, but the home clubs had been reaping the rewards with almost every club seeing a boost in the crowd thanks to groundhoppers and other fans that would be otherwise engaged on a normal Saturday match. It would be just me and Dan for this one as Anwar was once more unavailable due to his Mum having to cover for absent staff at her work, a feeling I know only too well from my job. Also the other half of the Braintree duo Maurice was a bit skint so he decided to give the game a miss too. 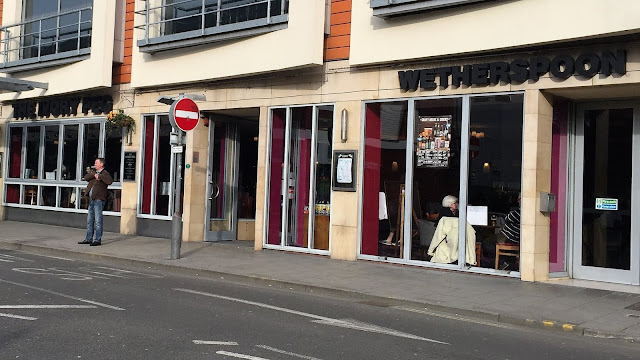 On the day of the game, it was a reasonable enough day at work, with me all finished by 11.45. After getting a few bits that I needed I went home for a while. I had my lunch and caught up with various things for a bit before leaving at 3. I’d decided to stop off at Chelmsford again, mainly to get across the M25 before the rush hour started, but also as I would need to get something to eat. I planned on looking in a few shops and ticking off a Wetherspoons for dinner. I got to Chelmsford at 4.30 and from there it was just under a mile walk to The Ivory Peg where I had a burrito with chicken and a can of San Pellegrino Lemon, as well as a pint of my favourite cider Black Dragon for £8.79. I then walked back to the car, stopping at Home Bargains before heading off to Braintree. I would have gone to the Essex Cider shop to get some stuff to take home, but I was short of time. I got to Maurice who had a last minute change of heart to come with us again at 6, before picking up Dan and getting to Clacton at 7. I  went in paying £7 entry plus £1.20 for a programme and getting a pen for £1.50. 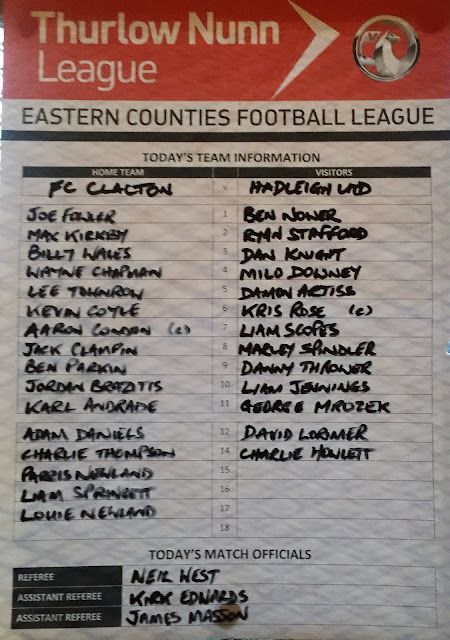 Before the game I had a look around, getting some pictures of the ground and catching up on Facebook before kick off. Hadleigh had much the better of the game and took the lead on 8 minutes after a shot was initially cleared, however George Mrozek was on hand to drill home from the edge of the area into the bottom right hand corner. They dominated the first half and carried this on in the second half with Liam Scopes doubling their lead on 48 minutes. The hosts made their task even more difficult when Lee Townrow got 2 yellow cards for dissent in the space of a minute and was sent off. Danny Thrower made sure of the 3 points for Hadleigh as he clinically put away a penalty that was awarded against the keeper on 68 minutes. I think that Clacton will look back on this as an opportunity missed but for 3 hoppers at least it had been a good evening. I made good time getting back to Braintree, dropping the lads at 10.20 and the getting home myself just before midnight. I watched TV, caught up online and updated my blog, happy that I didn't have work in the morning. 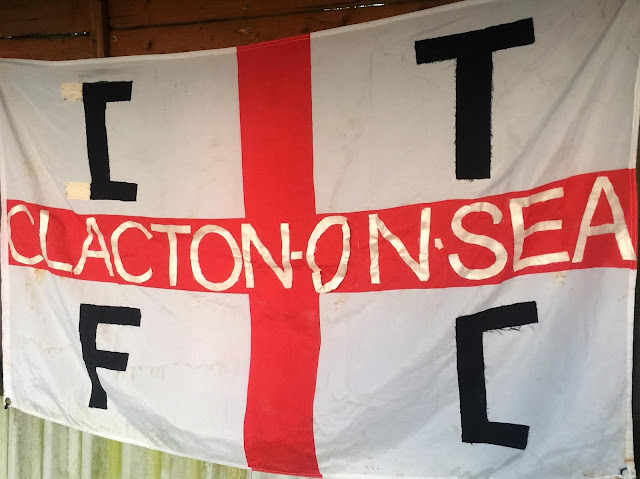 THE RUSH GREEN BOWL has been the clubs home since 1987 after the local authorities forced them to move from their town centre 'Old Street' ground to make way for a shopping centre. After being forced to play at a local college for months they finally moved into the ground in the October of that year though the first game was abandoned due to floodlight failure. Modern-day problems include the poor drainage on the pitch and the fact that it's a bit cut off from the rest of the town, making attracting the casual fan a tough challenge.

The ground itself is not too bad, There are areas of cover on 3 sides of the ground, all with decent views. The main stand holds around 100 fans on benches and offers good views, despite pillars holding the roof up. Opposite is the 'Bus Shelter' stand, holding around 100 standing fans whilst there is covered standing for another 100 behind the goal. The club shop has a good range and also old programmes from various clubs. The tea bar and clubhouse are pretty standard, but with nothing else near the ground, they might be your only option. 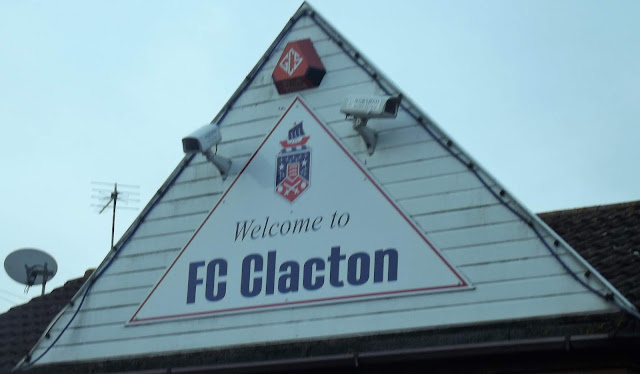 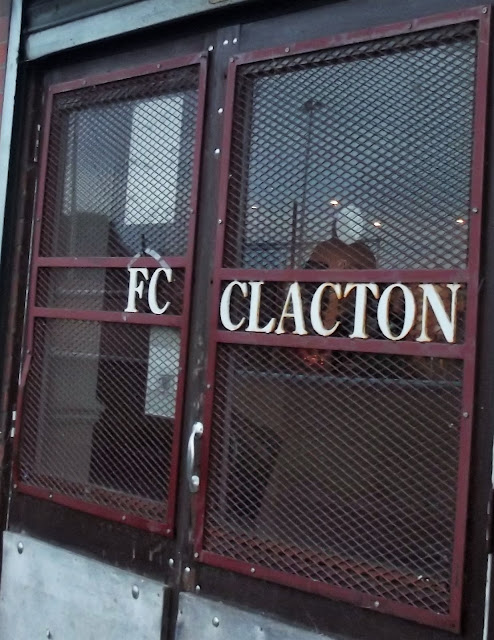 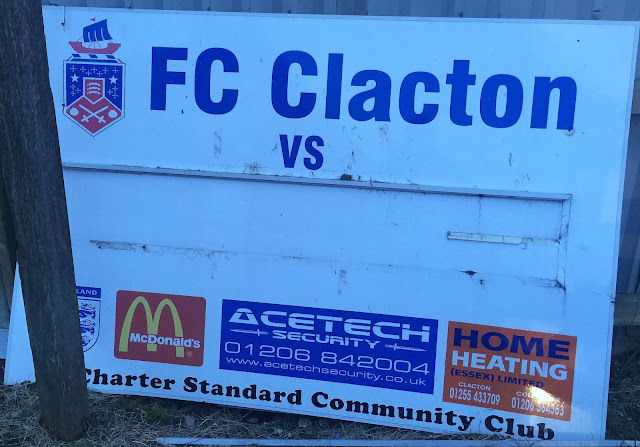 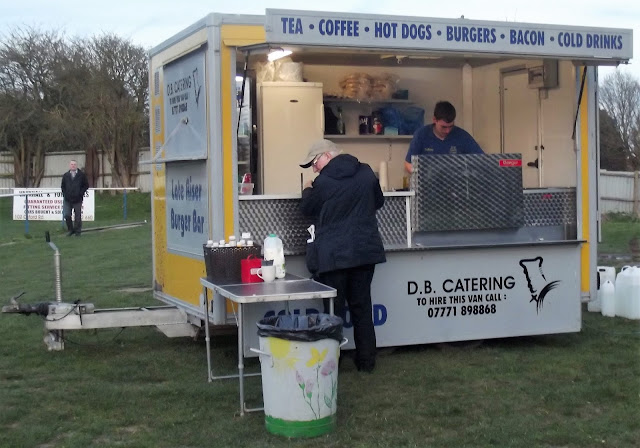 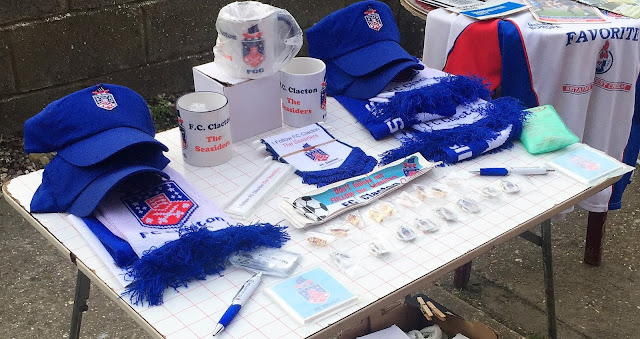 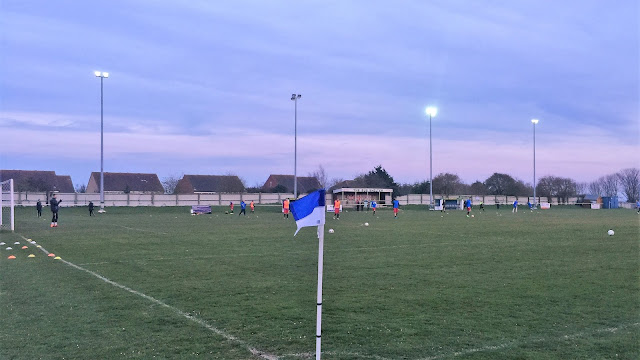 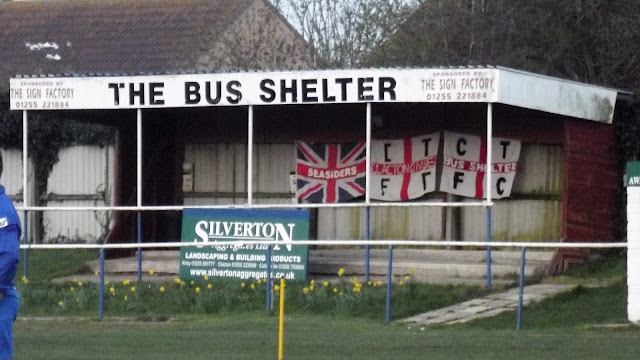 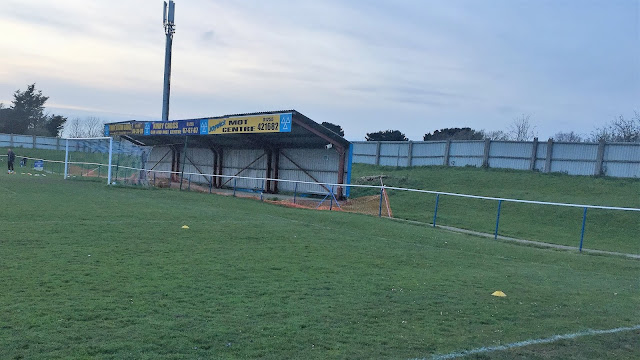 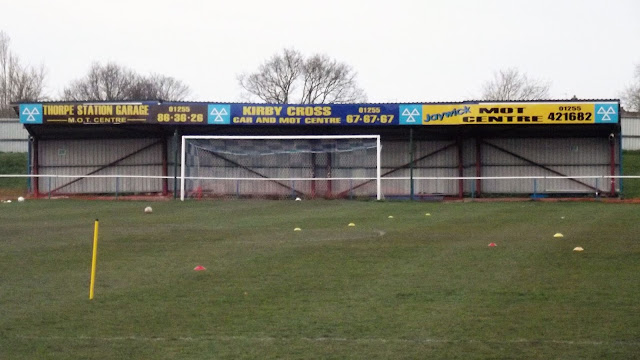 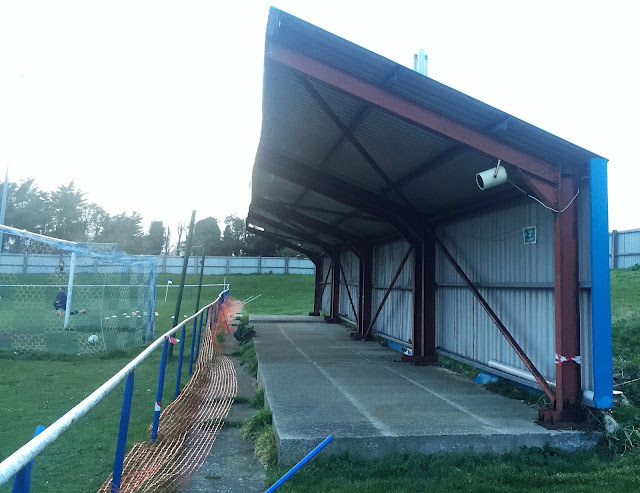 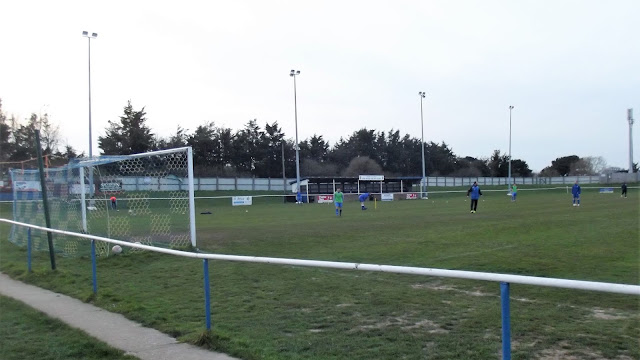 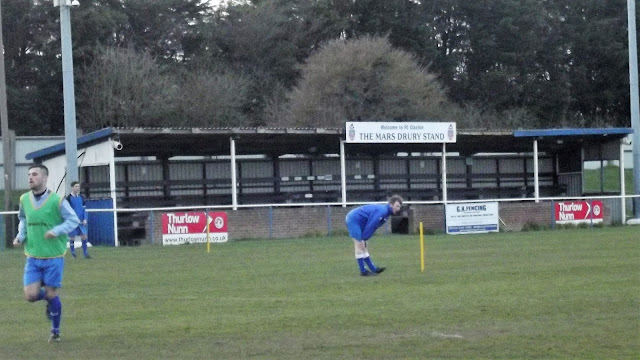 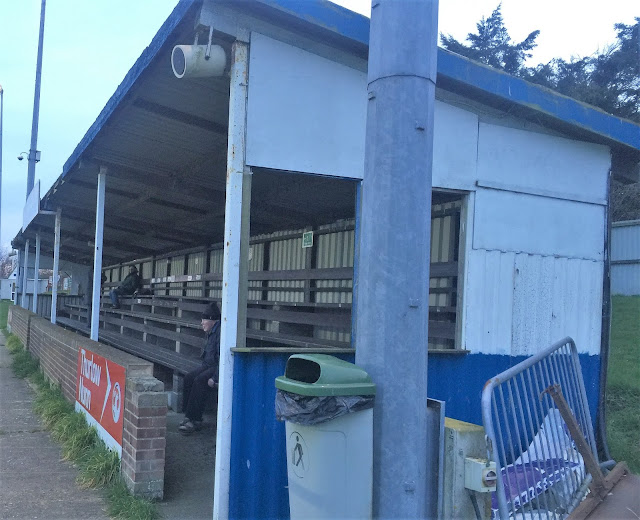 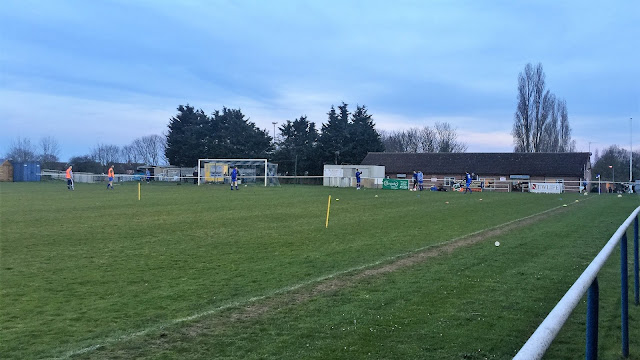