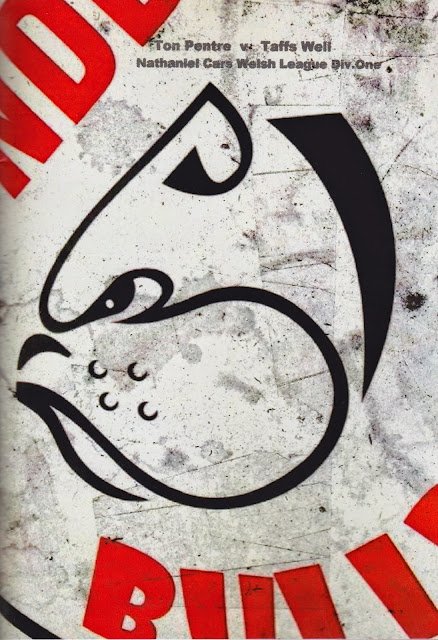 The club was formed in 1896 though some sources give it as 1935 when the club was reborn. They are one of the most successful clubs in Wales and have won their current league - the Welsh Division 1 on no less than 12 occasions. They were in the top tier of the Welsh pyramid for a long time, even competing in the current Welsh Premier League up until 1997 when the expenses became too much and they resigned, returning to the Welsh League Division 1. They were highly successful upon their return, winning the title 5 years in succession. Sad news was to follow when in 2010 they were relegated for the first and only time in the clubs history when reorganisation increased the number of relegation places. They were only in the drop zone for the final 20 minutes of the season, but it meant a single season in Division 2. They came back at the first time of asking, going the entire season unbeaten, and since returning have finished in a safe mid-table position. This season saw them sitting slightly lower than usual, in 13th place.

They had a great European adventure in the mid-1990s, though the costs of this would eventually lead to their resignation from the Welsh Premier League.  4 games were played against the likes of Heerenveen and Leiria and although they lost every single game without scoring, they did get to play against European greats such as Ruud Van Nistelrooy and John Dahl Tommason during their Intertoto Cup campaign.

Domestically Ton Pentre has won a number of competitions including the Welsh League cup, lastly in 2001. They made the Welsh Cup semi-final in 2002, their best progress since making the final in 1921 where they lost to Cardiff City. They even played in the English cup competitions for a while reaching the FA Trophy 3rd Qualifying round at the start of the '70s. Their most famous day came in 1986 though, when after beating Basingstoke Town, Sharpness, Clevedon and Minehead, they faced local rivals Cardiff City in the FA Cup 1st Round. They lost 4-1 but gained national recognition when they featured on Match Of The Day. The most recognisable player that has ever played for them is current Luton player Alex Lawless who started his career at the club. 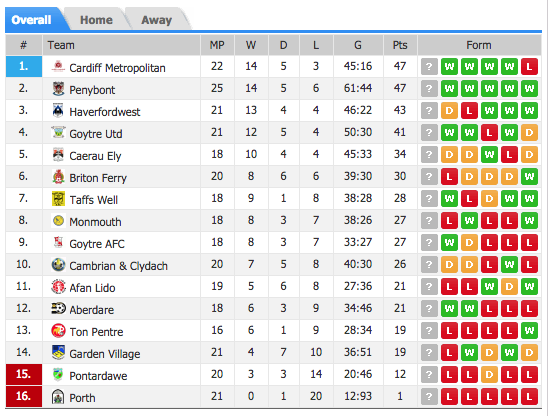 Researching the village of Ton Pentre on the internet, it appeared that there was not too much info on pubs, with no cider outlets listed. However, there was one called Fagins - I had been to an excellent pub of the same name in Taffs Well - and I was hoping this was of the same ilk. Most importantly I was hoping for a pint of Gwynt-y-Ddraig cider pre-match - the stuff is heaven sent, and although I would be off to Wales next week for a groundhop, I was still gonna try and get some to take home. I'd not be going hungry - the place had a decent range of takeaways for my dinner. They included the brilliantly named 'A Fish Called Rhondda' which I had seen in national newspapers for its inventive name. The village had once been thriving in it's coal mining days, but since they had closed there had been a sharp rise in unemployment. People moving there and commuting to Cardiff had helped out a bit, but it was still a far cry from it's heyday. I was once again indebted to my mate Matt's excellent Lost Boyos blog to glean some extra facts before I travelled. 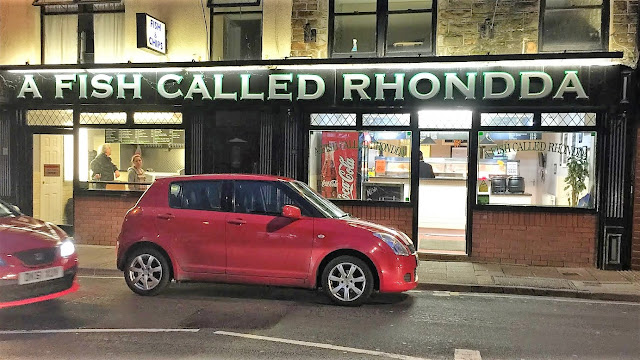 I'd really enjoyed my Friday night football last week and once again was looking to end my week on an enjoyable note. I was even more determined when I found out that I would have no fixture on the Monday of my week off - that was unless I fancied a revisit to Curzon Ashton, Runcorn Town or Atherton Colleries. All 3 had produced great nights out before, but I couldn't justify that much money on a revisit. There was one game at a new ground, but it was MMU Cheshire in the Staffordshire County League - and they play at an athletics stadium. As per usual on a Friday, it was Wales offering up the bulk of the games. Under normal circumstances, I'd have considered the trips too far but seen as it was my week off, I thought I'd treat myself. Ton Pentre was the closest and happily, it was the one I fancied doing most. It would also mean seeing Taffs Well again - and I had a really good night on another Friday game, back at the end of September. In between the last groundhop and this one, I'd not been up to much, mainly watching football on the TV as it was European week. I was winding down at work, knowing that after Sunday I was having a week off from the place, something that I was really looking forward to, mainly for the opportunity to go to a load of football matches in Yorkshire and Wales. I was also planning a few nice pubs that I knew, and for that reason, I had abstained all this week and would be taking it easy at the weekend, though I would treat myself to a couple on Friday night.

It was a very busy day at work on Friday and so I didn't leave until 1.45. Before I went I took advantage of the free buffet that work had laid on for my lunch as well as buying a few things for the weekend. I felt pretty drained as I left, but eagerly anticipating my 117th game of the season. As I didn't fancy paying the ransom to get over the Severn Bridge, I had to go up via Oxford and Gloucester. The journey was a very slow one, thanks to lots of lorries obeying their own speed limit and slowing everyone else down. The M4 was very slow when I finally joined it too but once I was past Newport, it all sped up. I got off at the Rhondda Valley junction and was pleased when I saw a big Tesco. However, it turned to despair as they had stopped stocking my favourite Welsh cider. After I had written a complaint about it last time I got a funny reply from them and a £15 voucher, so I think I might try again. I spotted an ASDA near Tonypandy on the way up to the ground and I was hoping they would come up trumps. I finally got to the ground at 5.45. I had a false start initially as my sat nav directed me to the wrong side of the ground. However once I had put the road name in, I found where I wanted and confirmed I was in the right place by seeing the bridge and rabbits that Matt had mentioned. I went in search of a pub and after a bit of a walk found the Gelli Hotel. It was a smart establishment and the pint of Strongbow Dark Fruits went down a treat after a long trip and 6 days on the wagon. At £2.80 it was a good price too. I then went to the brilliantly named 'A Fish Called Rhondda' for my dinner, having Mexican Chicken Wrap and Chips. I was frustrated by the poor mobile signal which seems to be par for the course in lots of Wales, rendering me unable to access the Internet at anything less than circa 1997 dial-up speed. A plus point was that my dinner was excellent, especially for the £4 I paid for it. From there I made my way to the ground, paying £4 to get in, and £1 for a nice thick programme. I went around taking pictures of the ground before going back outside to the clubhouse. I was most delighted when I found that they did Gwynt y Ddraig in bottles and really enjoyed my scrumpy. I bumped into another groundhopper, Mark, who had come down from London for the game. I was in a happy mood now and was wishing I'd come straight to the clubhouse instead of looking for a pub. 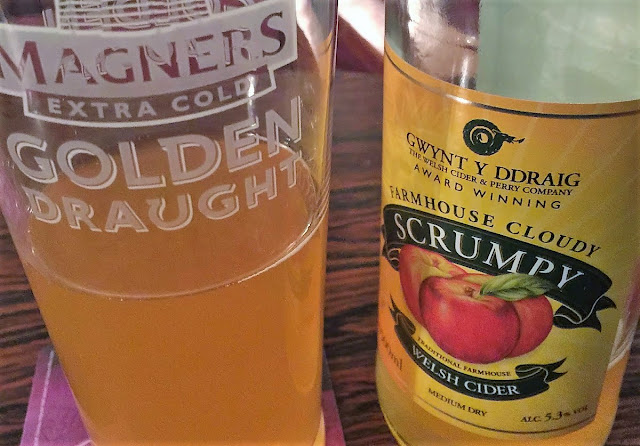 I'd gotten a really warm welcome so far and got into the ground right on kick off. It was a cagey opening but Taffs Well scored after 9 minutes after neat footwork allowed them to complete a close-range finish. It had started raining by now so I was glad of the cover in the stand. I saw a lovely Springer Spaniel which reminded me of Maisie, the family pet we had from 1993-2006 and this dog was equally friendly. That was how it stayed until the break. At half time I went back to my car to put stuff in the boot and also have some of the Easter Egg I had bought earlier. It was a similar goal to the opener that got Ton Pentre on level terms on 65 minutes, just as I was getting another Cup of oxo - a bargain in a proper mug at 60p. A few minutes later the home side were ahead, pinball in the area resulted in the ball going in the net to send the majority of the crowd into delirium. On 75 minutes a Taffs Well player put in a challenge just outside the area which resulted in a good old fashioned session of handbags which the referee did well to break up. The visiting man got his marching orders and it was strange as he was the forward on this occasion. There were chances but no further goals as the hosts clung on for a valuable 3 points. 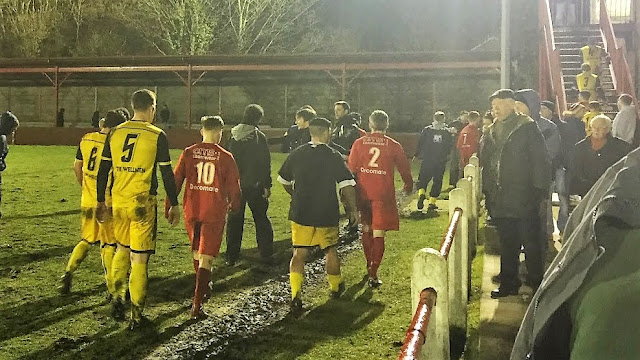 After the game finished, I said goodbye to my fellow groundhopper Mark and hoped to see him when I went to Goytre United next Friday. I nipped to the Spar down the road to see if they did any of the cider that I wanted, but no luck. ASDA’s also drew a blank, and with the brewer being uncommunicative via Twitter, I wished I’d bought a few from the football ground as the mark up was not that bad compared to what Tesco did charge when they actually stocked them. The journey home was a lot better, though it took me a while to get the Sat Nav started, due to the poor mobile signal. Luckily I remembered the way I had come until I got it started. After a brief toilet stop at Membury services, I was back home at 12.10. I had a couple of drinks while catching up on Facebook before going and watching TV in bed. I had spent over £50, with the bulk of it being fuel but it had been an enjoyable night. 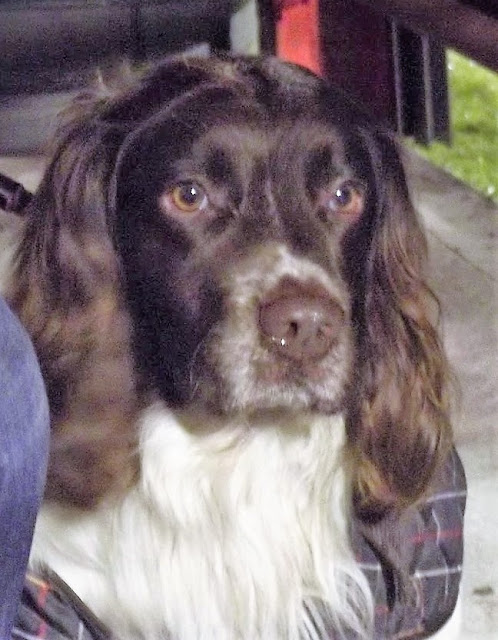 YNYS PARK is a nice and traditional ground. The standout area is the large covered terrace which covers the whole of behind the goal and probably holds 1000. There is also a small stand on the halfway line, holding around 150 fans. The rest of the ground is uncovered flat standing. There is an excellent clubhouse at the ground, full of memorabilia and with a great selection of drinks. I’d highly recommend it. As for food, the chippy ‘A Fish Called Rhondda’ was good though the food in the ground was great value. In fact the whole day out was great value - it was just a shame that they don’t sell diesel as that cost me plenty. The club is really friendly too, and I am looking forward to going to more grounds in this league. 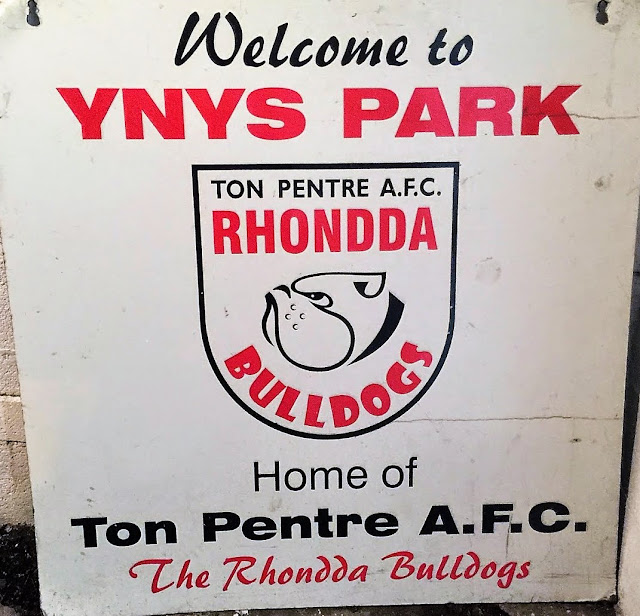 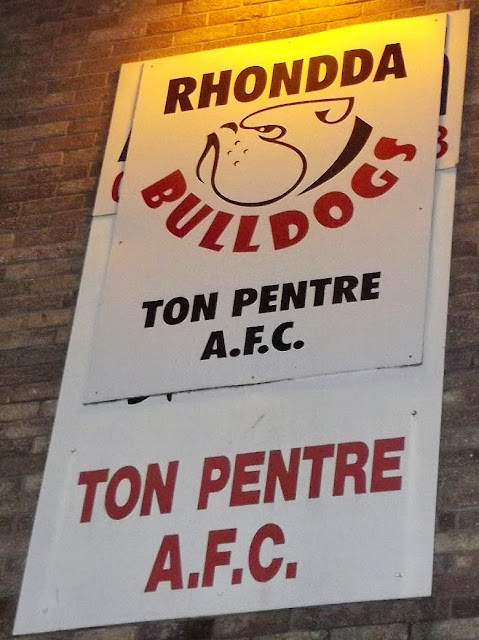 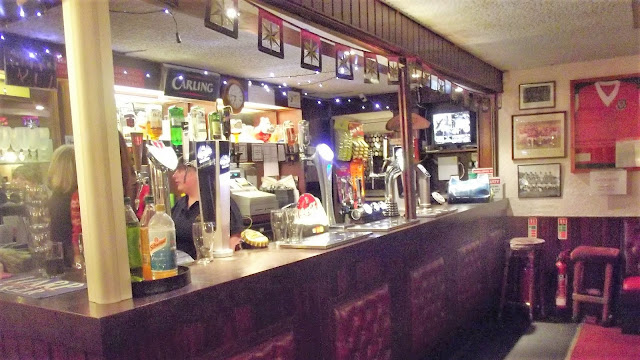 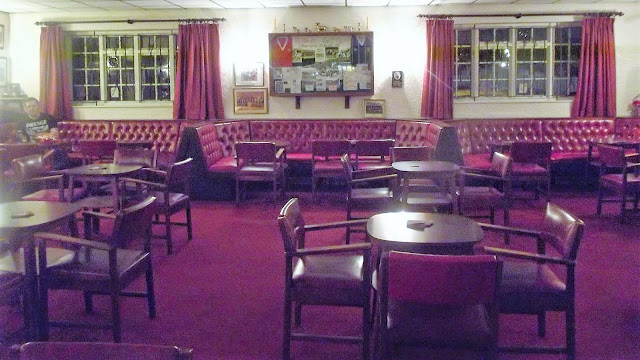 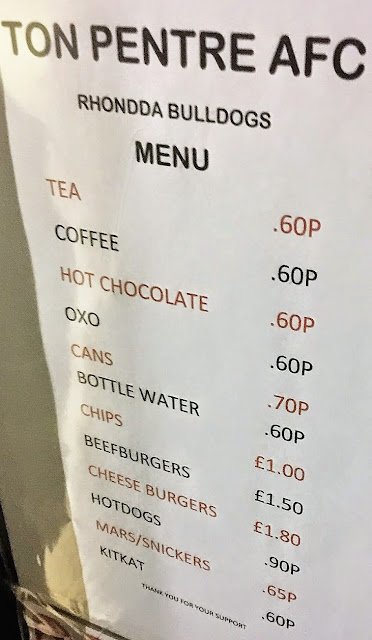 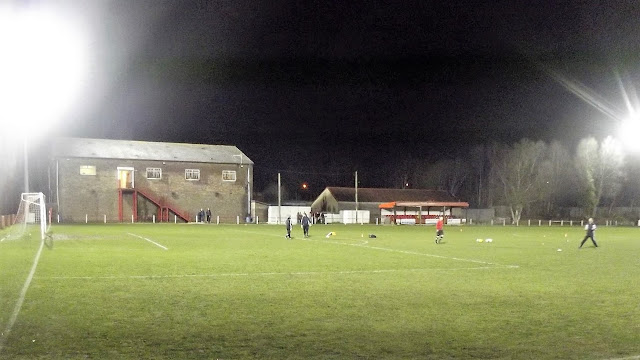 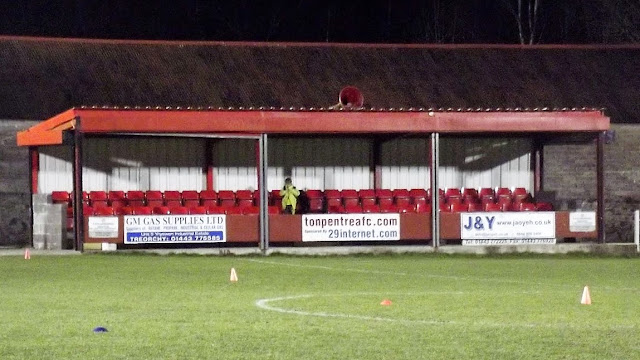 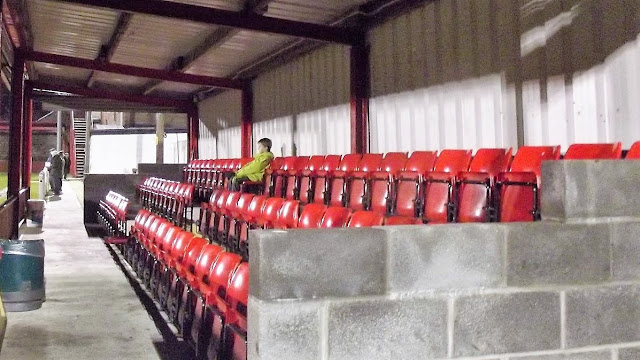 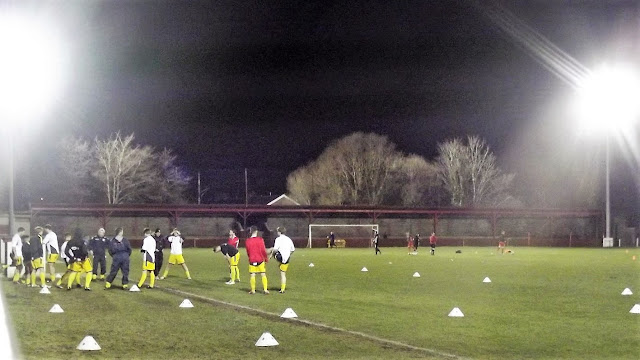 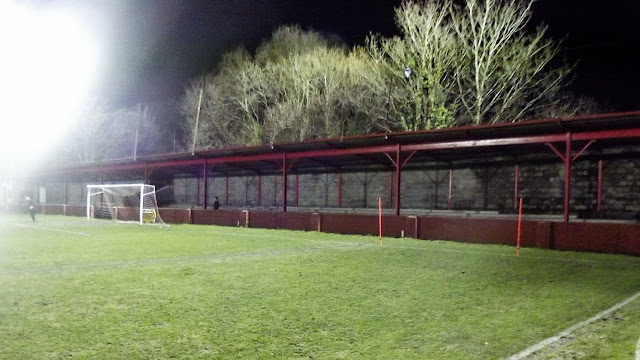 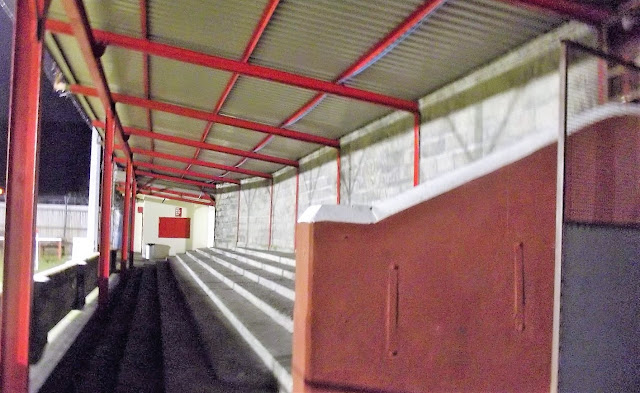 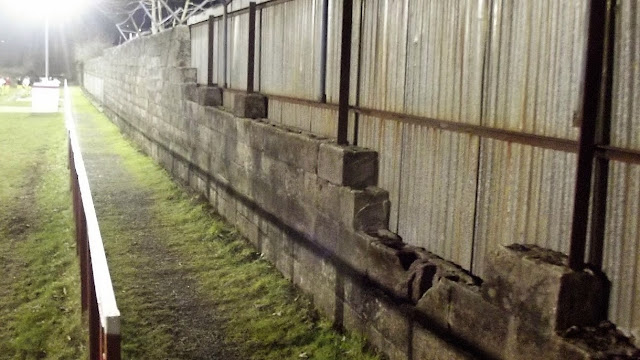 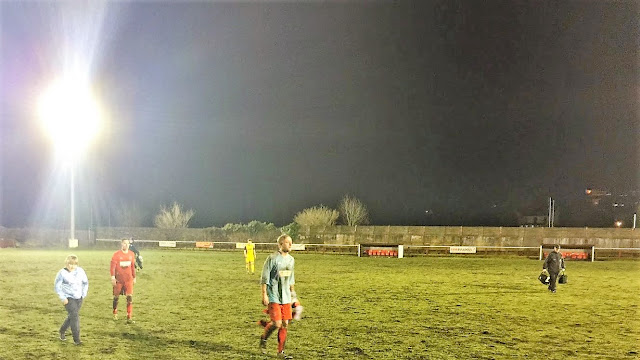 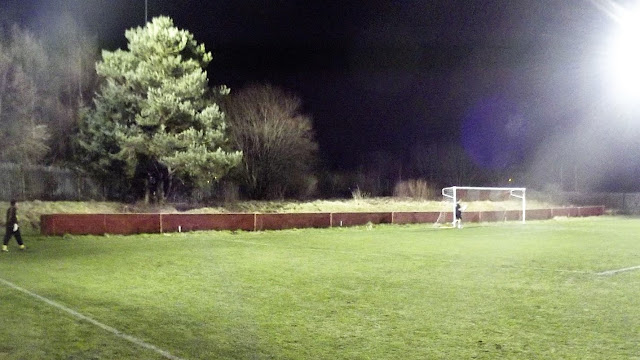