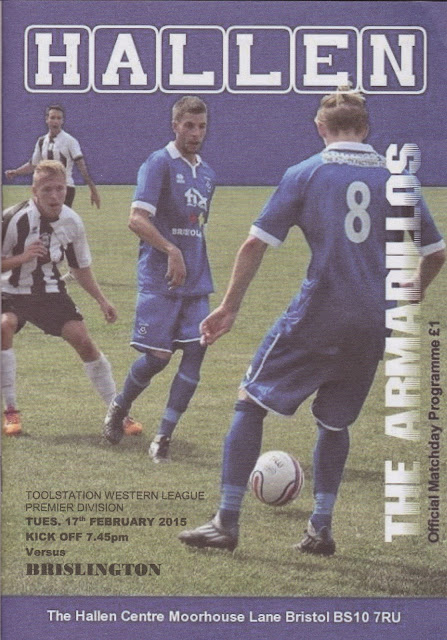 HALLEN FC was formed in 1949 and were originally called 'Lawrence Weston' after the area in which the club was born. They moved to the village of Hallen in 1979 and from then from 1982 until 1990, they were known as Lawrence Weston Hallen. After that, they adopted their present moniker. 3 years later saw them join the Hellenic League at Division 1 level after several seasons playing in the Gloucestershire League. They finished 6th in that season of 1993/94 and after progressing well they won promotion to the Hellenic Premier in 1997 after finishing runners up behind Ardley United. They spent 3 seasons here before transferring to the Western League in. This would mean they were geographically much better off but had to drop down a level to get the move. They took 4 seasons to win promotion to the Western Premier, where they have remained ever since 2004. They had a best-ever finish of 4th in 2012 and have always looked pretty secure at this level. They were sitting in 17th place at the start of the game, not the best season, but still a few points clear of the relegation spot.

The club has seen considerable success in the cups. In 2005 they beat Melksham Town, Bemerton Heath Harlequins, Team Bath and Bishops Cleeve to set up a 4th Qualifying Round tie with then Conference Premier side Canvey Island. 90 minutes from reaching the 1st Round, they were eventually beaten 4-1. They have also reached the 5th Round of the FA Vase on a couple of occasions, most recently last season when they went out to West Auckland Town. They have also won a few local cups - The Gloucestershire Challenge Trophy, Gloucestershire Junior Cup and most recently in 2010, the Les Phillips Cup which is the name of the Western League's Cup competition. The village didn’t get much of a selling on it’s Wikipedia entry saying it retained some charm, but had ‘been bisected by the M5 motorway which has left it somewhat desolate’ It was also noted as having a ‘dark past’ as it was the hanging place for poor condemned wretches and suspected homosexuals from Bristol in a field called The Gastons. The name of the village comes from the old Saxon word for a place of salt. 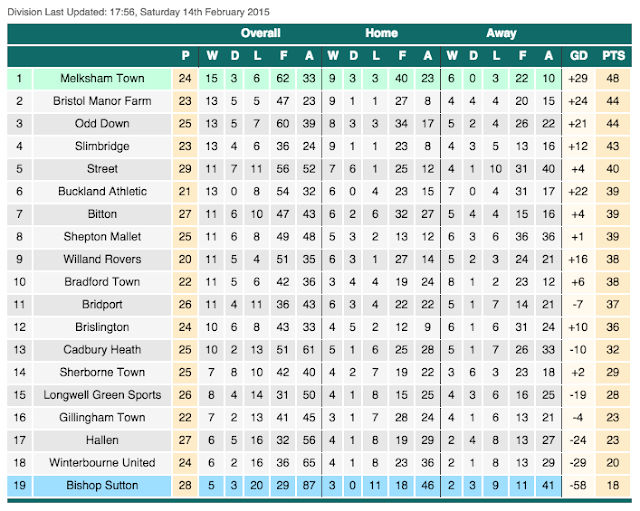 On Saturday morning before this week, I started compiling a list of games that myself and Anwar could go to this midweek. It was lucky that I only spent 10 minutes as at the game Anwar had let me know that he fancied doing Bristol City or Rotherham to tick another of the 92 off his list. He said Bristol was his preference and I was fairly happy with that as I was in Yorkshire this coming weekend, plus the M4 was generally more reliable in the rush hour than the M1. I was left with 2 nearby options, both in the Western League and 20 minutes away. Hallen v Brislington looked the more attractive game, but Almondsbury UWE v Oldland Abbotonians had a decent looking pub near it. When I established that there were no new ciders for me to try at The Swan Hotel, I plumped for Hallen, as they were also the better communicators on Twitter out of the 2 clubs.  I had not been on a groundhop in 11 days due to my commitments with Wycombe, and with my last one being the Friday night ay Keynsham, it would be my second consecutive visit in the Western League. Not that this was a problem, they were well run and communicated well on the internet, with a well laid out and informative site. I was delighted to find this very blog featured on the front page of their site. The football had been a mixed bag, the game at Keynsham was pretty average, but my only other game in this league was at Melksham Town in November 2013. As well as one one of my favourite grounds of all time, it was also a decent game, with Bristol Manor Farm recording a 5-1 away victory. 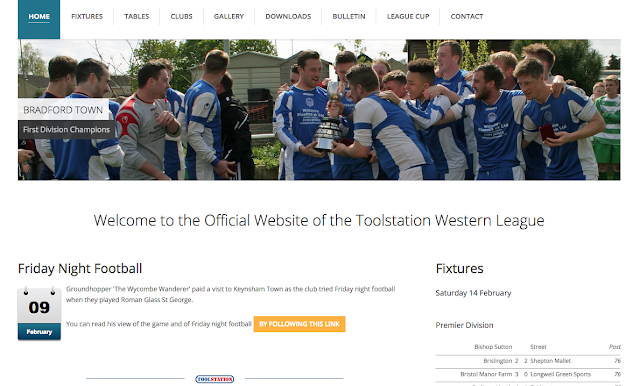 On the day of the game, I woke at 8am, having had a decent nights sleep. Though it was my day off, I still had quite a lot to do. Firstly after having some breakfast and a bath, I had to go up Tesco and check some prices. Then I had to take a parcel up our local shop to be returned. The rest of the time was spent chilling and being distracted by various things on the internet. I left at 3.15, getting to Aylesbury to meet Lewis, Connor & Anwar just before 3.45. I got there bang on time and within 5 minutes we were on our way. Despite some slow traffic on the single carriageways, we still made good time, getting off the M40 at 5.10 and into the centre of Bristol 10 minutes later. From there to Ashton Gate,  it was 3 miles, but the city of Bristol was a disgrace road wise. I have expressed a desire to explore Bristol more, mainly because of my love of cider. Also, there are lots of nice waterways and hopefully clean air. Well, that would have been spoilt as it was completely gridlocked and it took 1 hour 45 minutes to do 2 of the 3 miles. Luckily it eased up and I was dropping the lads off at the ground at 7.10. I spent most of the time in traffic cursing and swearing, as there is nothing worse than wasting your hard-earned free time being stuck somewhere.

I had planned to pick up a takeaway somewhere between Bristol City FC and Hallen, as looking on Google Maps, there only seemed to be a local pub there and I wasn’t that sure what they would do at the ground.  Of course, thanks to the earlier fun and games in Bristol, there was no time. I got to the ground at 7.38 after a much better journey than my earlier experience. I paid £6 for entry at the turnstile and also £1 for a fairly decent programme. There was some decent content in there and not too much advertising. One of the people taking out space in there though was central defender Mark Reid. As well as learning from his pen picture that he had the less than inventive nickname of ‘Reidy’ and that he was a ‘legend; who ‘bolstered the defence with his leadership and experience’, he was also a plumber. So supporters could have last seasons player of the year come and fix their taps or heating for them, and he was gas safe registered too. There was still 5 minutes to go until kick-off, and with my head stressed from the travel chaos I fancied a pint. Sadly the bar was located outside the ground, and you couldn’t bring your drink inside. So I drank up fairly quickly and got back into the ground a couple of minutes into the game. I was pretty hungry by now, so after taking some pictures of the ground, I went to the tea bar and got myself a nice sausage roll, returning later to get a chicken balti slice. Both were £1.50 and were tasty and good value. 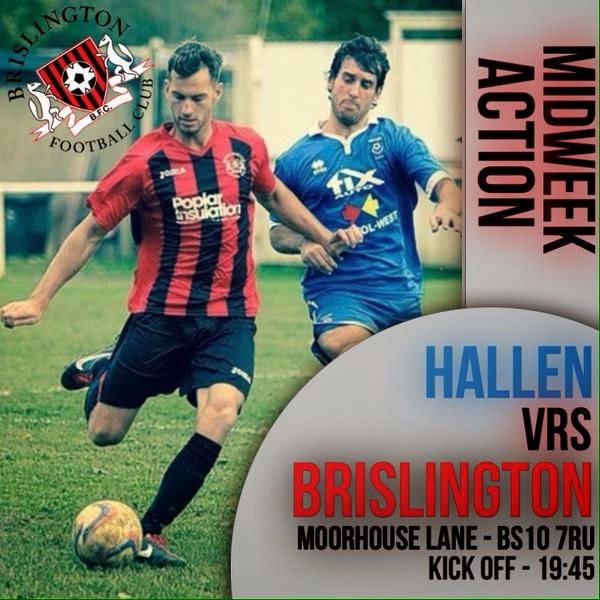 As for the game itself, I didn’t take too many notes due to being rushed/ It was a decent enough encounter though. Brislington was the better side throughout, especially in the opening stages. They took the lead on 10 minutes, Danny Hunt finishing after a good run. It was all square on 19 minutes. Brislington retook the lead 6 minutes later as Mark Rimmer netted from the penalty spot. The visitors had not won since Boxing Day, despite being fairly high up in the table. It was some victory though as they trounced Bishop Sutton 11-0. They looked to be finally ending that run but Hallen popped up with a second equaliser on 87 minutes to spark wild celebrations on the home bench. After the game, I nipped to the toilet before making a swift getaway. It only took 20 minutes to get back to Ashton Gate and as I was still quite hungry. I was surprised to see the roads clear around the ground and so I parked up and went to a local takeaway called ‘China Capital’ which did a very good and generous portion of chips for £1.40. My passengers were back by now and after they had got their chips and got in the car it was 10.40. We made good time again on the way back, even with a stretch of the M4 having a daft 50MPH speed restriction we were back in Aylesbury by 12.15. After dropping everyone else it only took me 15 minutes to get home, but I wasn’t ready to go to sleep. I watched TV for an hour before dropping off. I only had 2 hours of sleep before getting up at 4, but a couple of energy tablets set me up for the day and ensured I didn’t feel tired.

THE HALLEN CENTRE is a ground that I had previously visited to take photos of in 2007 when I was on the way down to Plymouth Argyle for a Wycombe away game. At the time I was impressed with the smart set up. There are 2 areas of cover - a smart 200 seated area called 'The Frank Fairman Stand' which was named after one of the founders of the club. There is also a small area of cover behind the goal at the clubhouse end of the ground, while the rest of the ground is open. The surroundings are green and pleasant, despite it's proximity to 2 motorways and everything is smart and well kept. The tea bar offers a small range of tasty and good value pastries, while the bar has tons of old memorabilia from various clubs and a choice of 2 Thatchers ciders. I am not sure how far the ground is from the village, but I do know that there is a pub that serves food there. 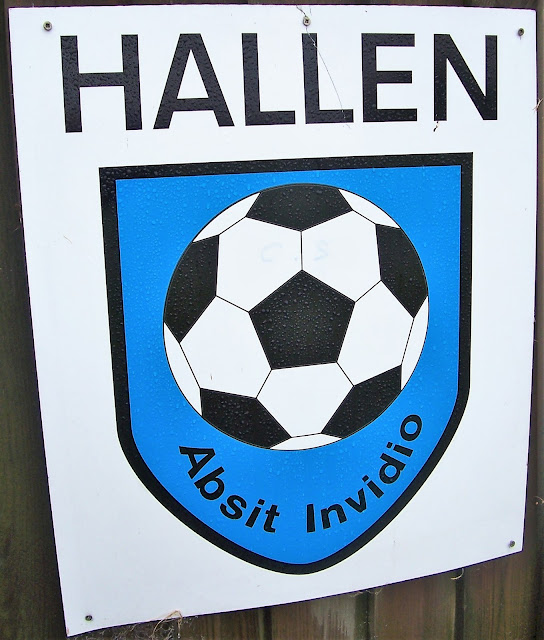 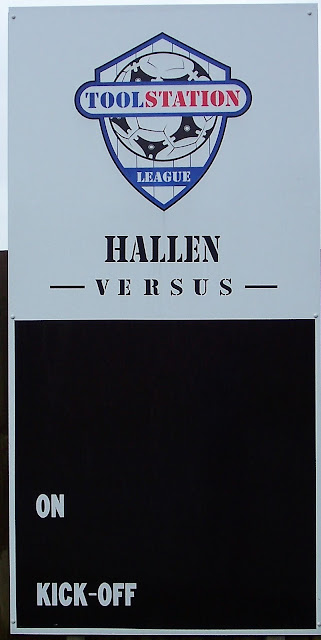 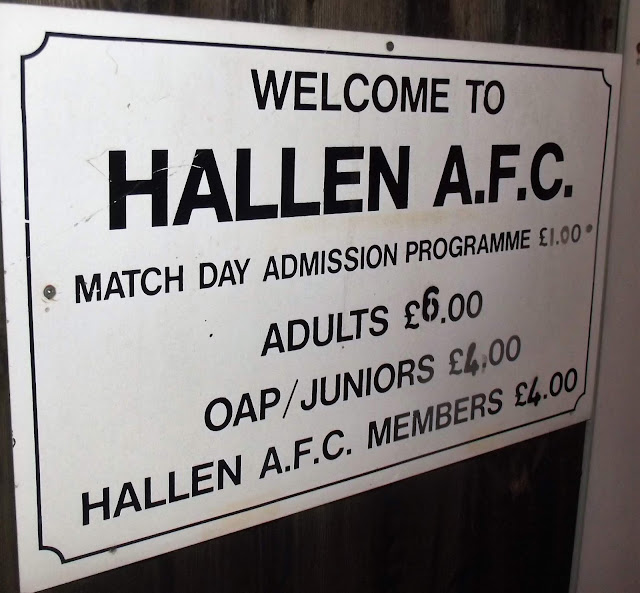 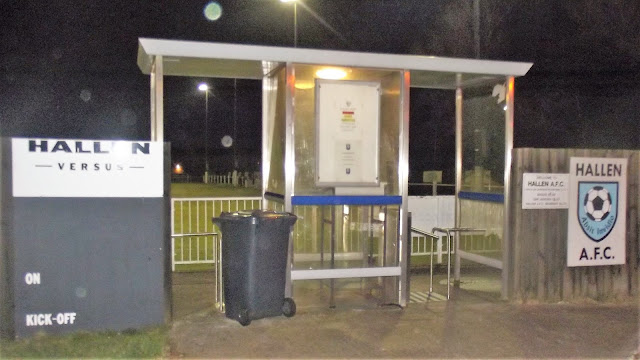 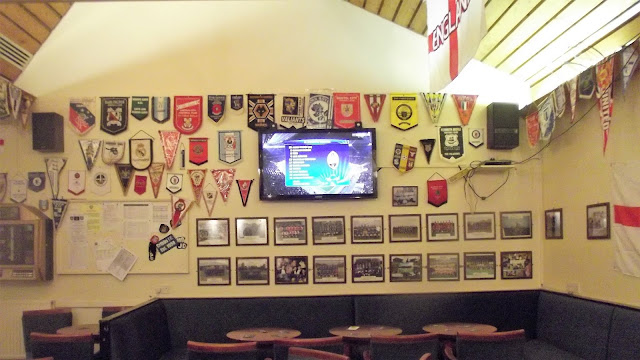 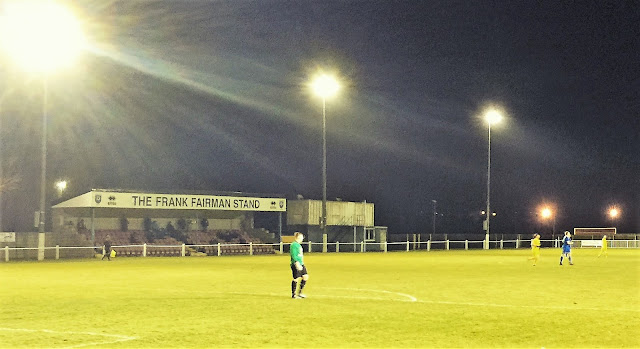 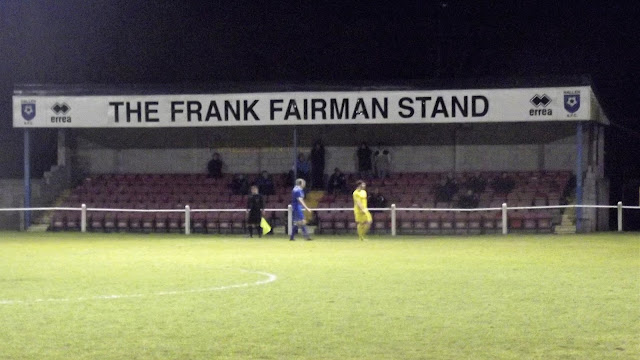 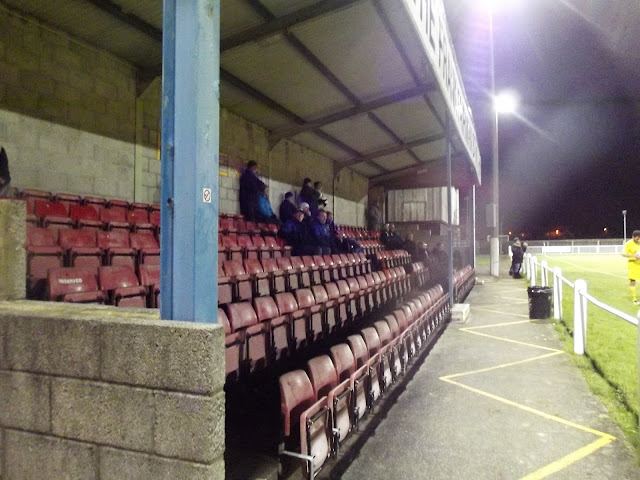 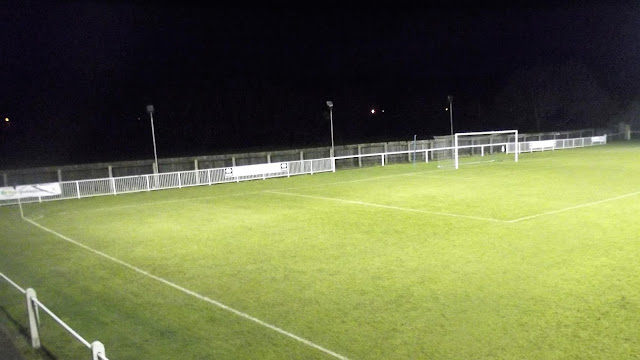 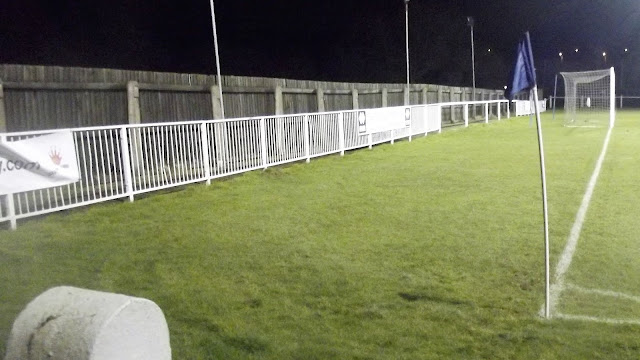 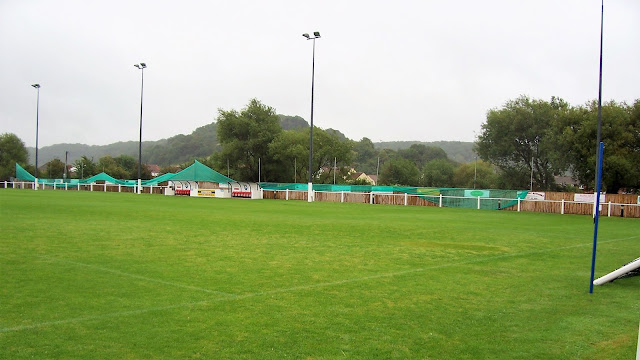 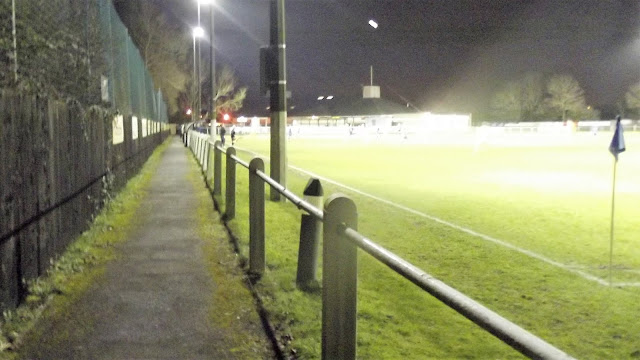 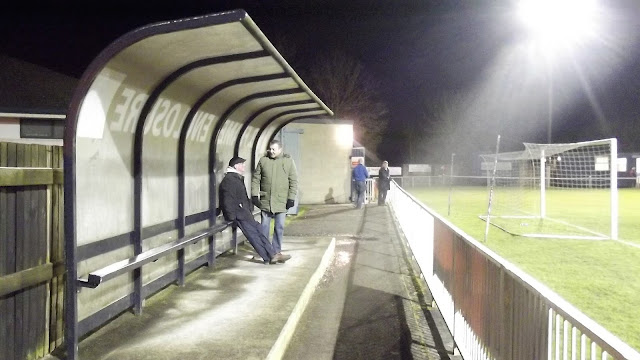