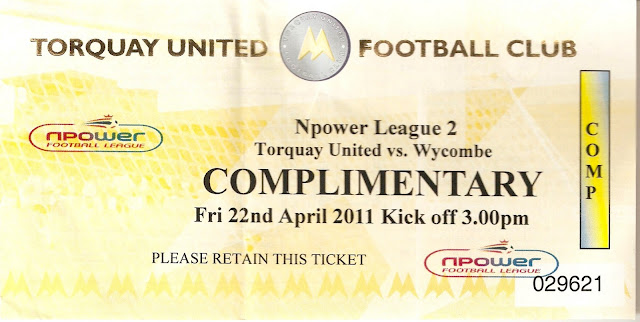 1:  The club was established in 1899 by a group of school-leavers under the guidance of Sergeant-Major Edward Tomney. They played friendlies at first, then joined the East Devon and latterly Western League and South Western League.

3:  With no automatic relegation until 1987, Torquay survived the drop on the first few occasions. They were all set to finish bottom for the third consecutive season that year until a police dog intervened. 2-1 down going into injury time, a German Shepherd called Bryn seemed to think that defender Jim McNichol was about to attack his handler and bit the player. This resulted in the game being held up whilst the injury was treated. It was in the four minutes of injury time that Paul Dobson got the equaliser and Lincoln City went down instead.

4:  They were not so lucky on the latter two occasions. In 2007 they would spend two seasons in the Conference, returning in 2009 when they beat Cambridge United in the playoff final. They were relegated again in 2014 and have struggled ever since. They even went down to the Conference South in 2018 but bounced back immediately as champions.

6:  The League Cup 3rd Round has been reached on three occasions, the latest in 1976 when they lost 2-1 at home to Swansea City. Recent form has been dire with the club suffering exits at the first hurdle at the last ten attempts, their last win coming in 2001 with a 2-1 win at AFC Bournemouth.

7:  Notable exploits in other national cup competitions include reaching the FA Trophy Final in 2008 where they lost 1-0 to Ebbsfleet United. They also reached the Football League Trophy Final in 1989, losing 4-1 to Bolton Wanderers at Wembley Stadium.

8:  The record transfer received by the club was £650,000 for Rodney Jack when he moved to Crewe Alexandra in July 1998. Their record signing is Leon Constantine who signed for £75,000 from Peterborough United in December 2004.

10:  The town of Torquay has a population of around 65,000 and is a popular seaside resort. It's most famous for being the fictional location of sitcom Fawlty Towers. Famous people to have connections with the town include Charles Darwin, Oscar Wilde, Agatha Christie and Max Bygraves. 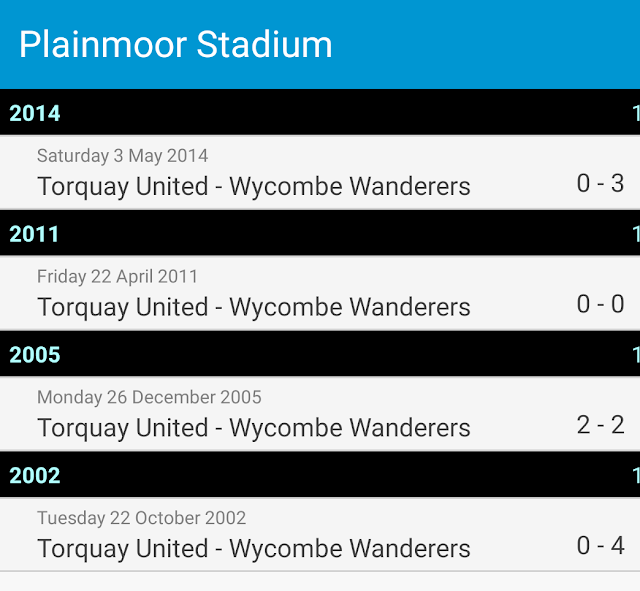 I was one of a handful of fans who made their way to the English Riviera for a Football League Trophy game in 2002. I was on the supporters' coach and the two random things I remember about the journey was food-related. One was someone paying £2 for a cream scone at the services and promptly throwing it up due to it being rancid. The other was another fan buying one of those foot-long tubes of Jaffa Cakes and finishing it within about half an hour. We eventually got to Torquay around 6PM and so had plenty of time to wander around before the game. I recall that the bar was open, but didn't serve alcohol as there was a problem with the licensing laws. The game was a very good night out for the 69 travelling Wycombe fans, Despite some great saves from Frank Talia saving us on occasions, we won easily. A Sean Devine hat trick and a Mark Rogers goal gave us a four-goal victory. We had two further draws when I attended in 2005 and 2011 and I generally enjoyed my visits to Devon. 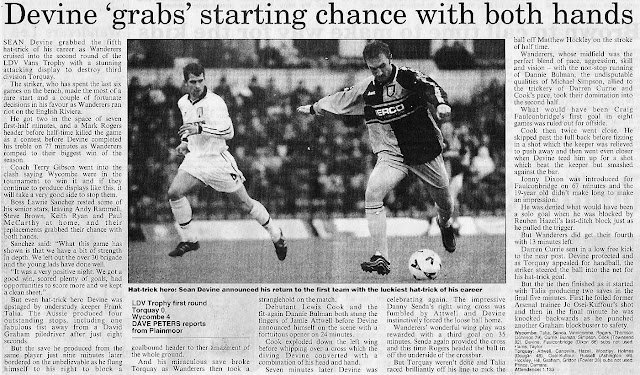 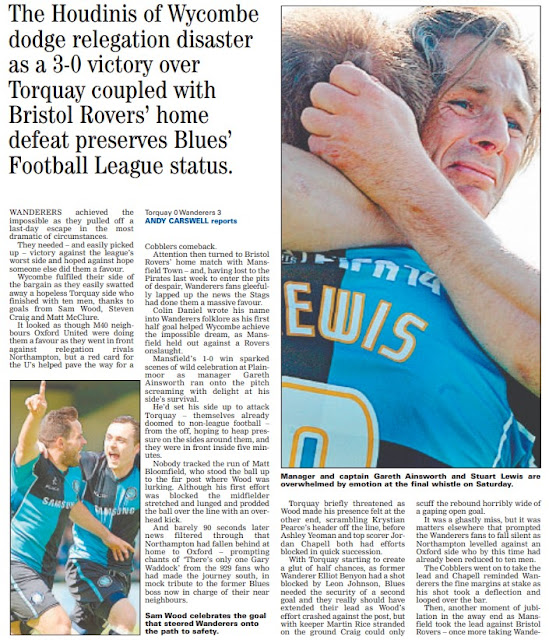 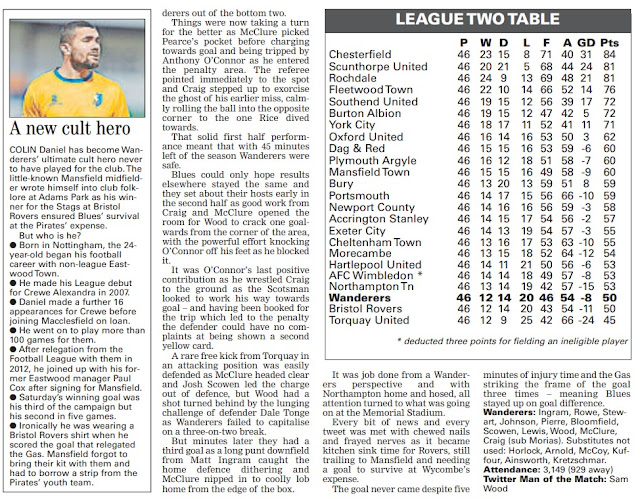 The fourth visit I made was more in hope than expectation. We'd suffered a dismal home defeat to Bristol Rovers and were all but relegated to the Conference with us being three points adrift at the bottom of the league. Five and a half years on, it still seems mad that we stayed up and I probably only went because the coach was a tenner. It was nice to chat to a fair few Wycombe fans I had not seen for a while. Services became tolerable now they sell alcohol in the shop, meaning you can relax with a bottle of cider in the sun. Which I did more of down Babbacombe seafront, along with some fish and chips. But the football was what we were here for and for once, it didn't disappoint. We won 3-0 and played as good as we have all season, with a lovely third goal from Matt McClure. But that meant nowt if results elsewhere didn't go our way. Oxford were one hope, but despite taking the lead against Northampton, they capitulated typical-Waddock-style as they had a man sent off and lost 3-1. So it was left to Mansfield to win at Bristol Rovers, and despite this game being the one where I least expected things to go our way, they did the business for us, for which we will be eternally grateful. Colin Daniel's volley condemned Bristol Rovers to non-league football and saved our bacon. And that means that former Macclesfield player Daniel, who is faster than (Usain) Bolt according to the Stags faithful has done more for Wycombe Wanderers this season than a fair few of our paid playing squad. We stayed at the ground until 5.30 celebrating before getting the coach home. I wish I'd updated this blog at the time, but have only just got around to it and forgotten a lot of what went on. 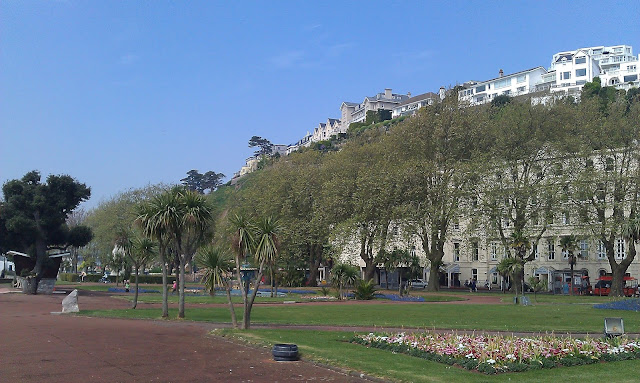 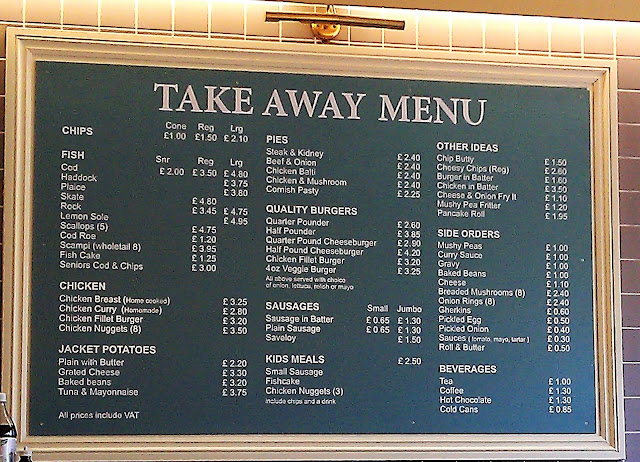 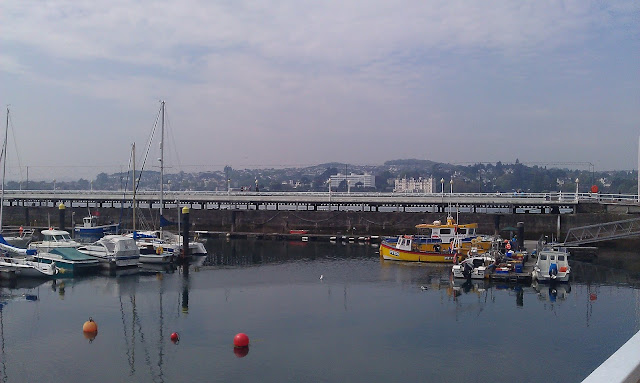 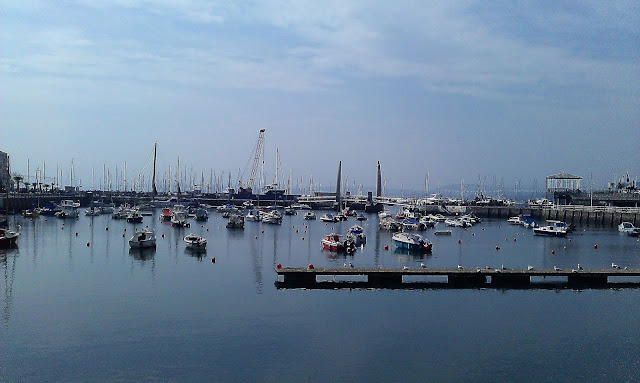 PLAINMOOR is a pleasant lower league ground and a nice place to visit. Away fans get a covered terrace behind one goal, there is a similar stand running along the side to the right of this. Opposite is the family stand, an all seated stand behind the goal. Finally to the left, is the Grandstand. This was the oldest stand in the ground, and away fans are given a section of this if they wish to sit. However, it's since been replaced with a more modern structure.


The tea bar and club shop are fairly standard, whilst the club bar, 'Boots and Laces' gets good ratings. Otherwise, the ground is slightly closer to Babbacombe than it is to Torquay. This has the Babbacombe Royal Hotel which was nice when I visited and also a chippy. The seafront is especially nice. 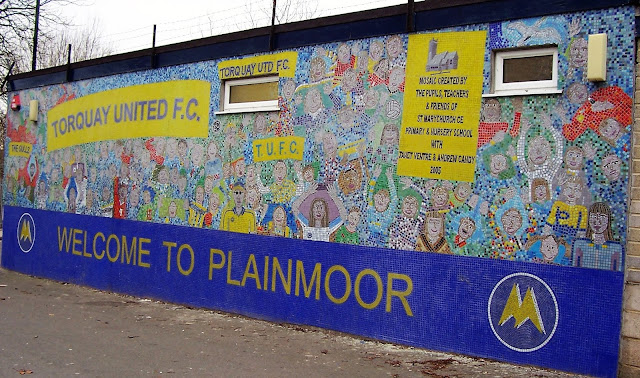 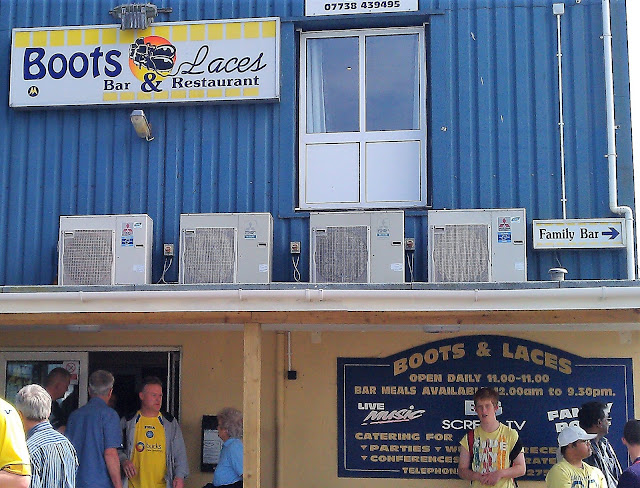 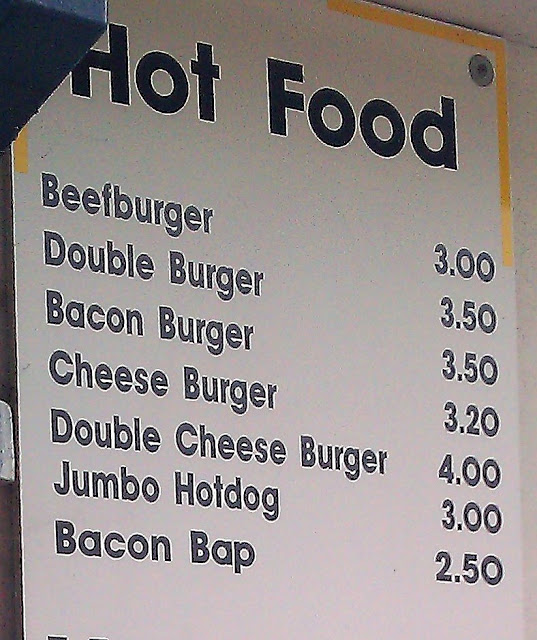 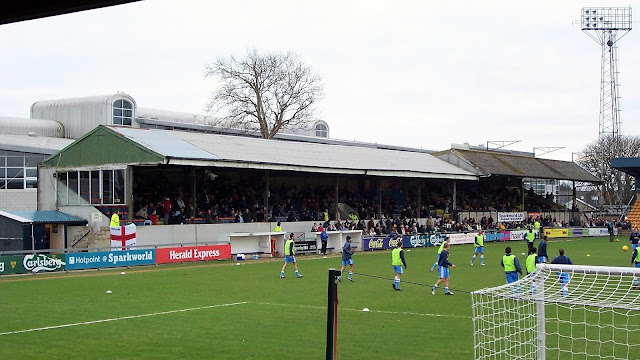 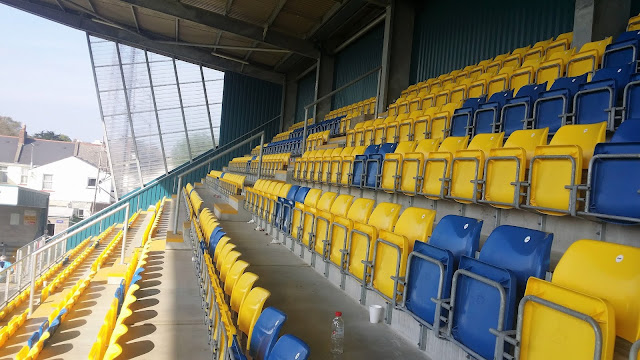 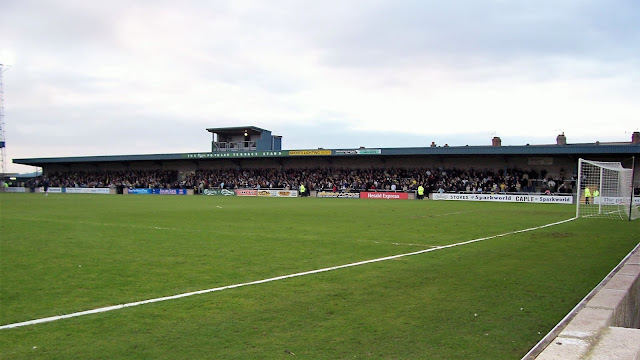 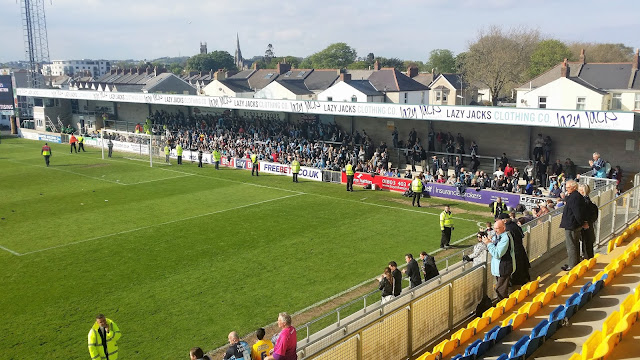 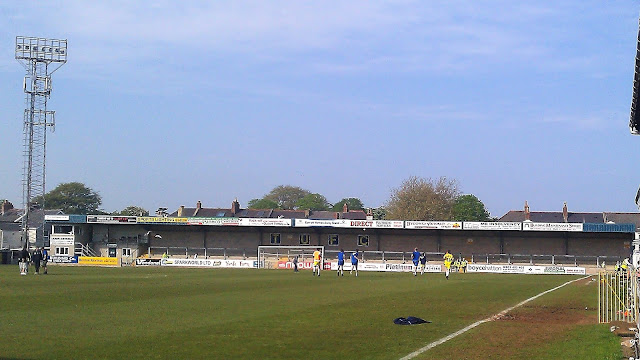 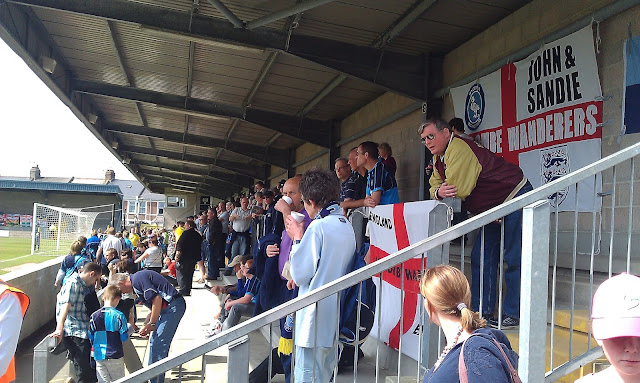