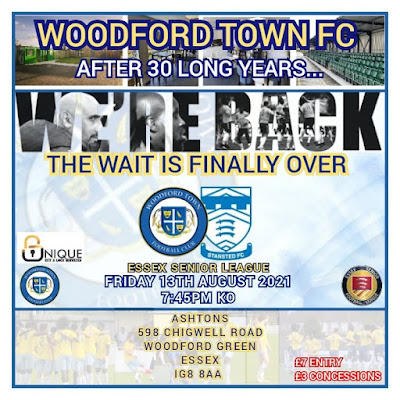 Club Website
Twitter
Instagram
Facebook
Ground Number: 982
Friday 13th August 2021
Woodford Town 1-2 Stansted
Essex Senior League
WOODFORD TOWN FC - A BRIEF HISTORY
As with a lot of club histories in this part of London, the club's history is far from simple. The original Woodford Town was established in 1937. The second world war soon interrupted their progress but they joined the London League in 1946, finishing as runners-up in 1951. Following this, they joined the Delphian League, a 3rd place finish in 1959 was their best finish here. The Metropolitan League was next up where they enjoyed a series of mid-table finishes, with brief breaks in the Greater London League. The  1971/72 season was spent in the Southern League Divison 1 South, but they left after one season after finishing bottom. A few seasons were spent in intermediate football before the club emerged in the Essex Senior League between 1976 & 1979 and the Athenian League up until 1982. They rejoined the Southern League after this and in 1987 they enjoyed the best finish in their history, 3rd in the Southern League Southern Division, at the time this was a step 3 league. Despite this, they dropped back down to the Essex Senior League and would finish as runners-up behind Brightlingsea United in 1990. The loss of their Snakes Lane ground in 1993 saw them lead a nomadic existence, sharing at various non-league grounds, mainly in the Spartan and Essex Senior leagues. They finished bottom of the league three seasons in a row between 2001 and 2003. They had problems even fulfilling games in their latter years and were voted out of the league before folding.

The FA Cup 4th Qualifying Round was reached a couple of times but in 1986, they enjoyed their best-ever fun. Hertford Town, Grays Athletic, Harwich & Parkeston and Kings Lynn were beaten in the qualifiers to reach the first round. They faced a local derby against (Leyton) Orient and were unlucky to narrowly lose 1-0. That season was a memorable one as well as their record league finish, they also reached the 4th Round of the FA Vase, losing 1-0 to Haverhill Borough. Famous players to play for the club include ace scorer Jimmy Greaves who played during the 1979/80 season whilst his father was at the club in the capacity of president. They had a European adventure in 1986, playing in the Anglo-Italian Trophy. The venture was not a success on the pitch with them losing both games to Piacenza and Merthyr Tydfil. 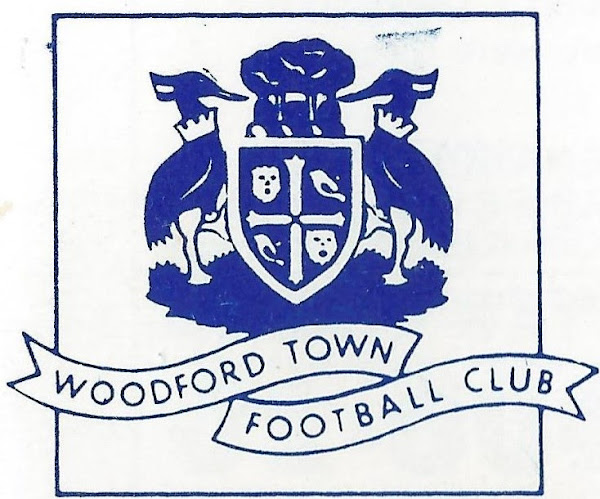 Whilst a club previously known as Goffs Oak and Bush Hill Rangers played in the Spartan South Midlands League during the 2015/16 season, the current incarnation was established in 2017. They have played in the Essex Senior League since their formation, groundsharing at Broxbourne Borough & Harlow Town. Their best finish came in 2019 when they finished 6th. The new club has had limited progress in FA competitions, but they have nurtured a star who went on to play for my own team, Wycombe Wanderers. Anis Mehmeti had been released by the Norwich City academy when he signed for Woodford Town in October 2019. He made his debut on 23rd October, coming on as a 75th-minute substitute before managing to get substituted, presumably due to injury. November saw him make his first start against Hadley and score his first goal at home to Saffron Walden. All in all, he made 14 appearances for the club, scoring two goals. In August 2020, he was snapped up by Wycombe for their B team, following an impressive performance in a friendly against Chesham United. By October, he had broken into the first team, coming on as a substitute against Millwall. By December, he had scored his first goal for the club and went on to make 29 appearances, scoring three goals. He also earned a call-up to Albania U19's - making a scoring debut against Andorra on 4th June 2021. 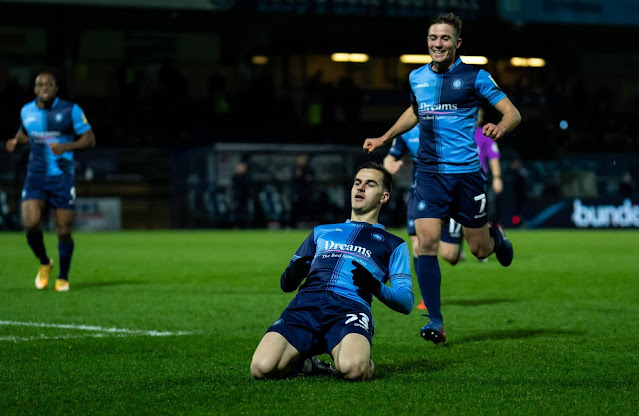 Woodford is a town and former parish in East London. It has two stations on the London Underground's Central line - Woodford and South Woodford. Famous people with links to the area include former PM and Labour Leader Clement Atlee, actor and singer Nick Berry, author Ruth Rendell and actress Kate Willams. Known in the recent past for playing Liz Turner in Eastenders, she lived in the area between 1972 & 1976 whilst starring in the now controversial sitcom 'Love Thy Neighbour'.
Sources used: FCHD, Wikipedia, Woodford Town Official Site, The Cold End & JJ's Left Foot 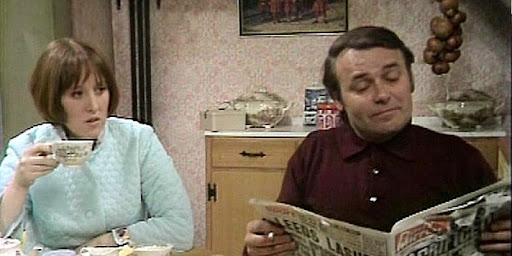 MY VISIT
Usually, I love a day out on the train in London and also a Friday night game too, so I was glad when this game was announced. Woodford Town were also good hosts when I saw them at Harlow and their fans were excellent. It was also the club that Wycombe Wanderers starlet Anis Mehmeti played at for a while before he joined us. However, further investigation left me considering leaving it for a while. I don't usually look at ground pictures before I go as it spoils the surprise. But fellow hopper Dan posted some pictures of the ground on our group and it looked dreadful. There was a running track around the pitch and other huge spaces meaning that the view looked dreadful. However, researching the clubs' history on the night before really got me in the mood. As with a lot of clubs in this part of the world, there were plenty of twists and turns as well as some incorrect information out there. But I hope I got it right, as it's my favourite part of blogging, the least favourite being able to do a semblance of a match report when I'd rather just be enjoying the game. 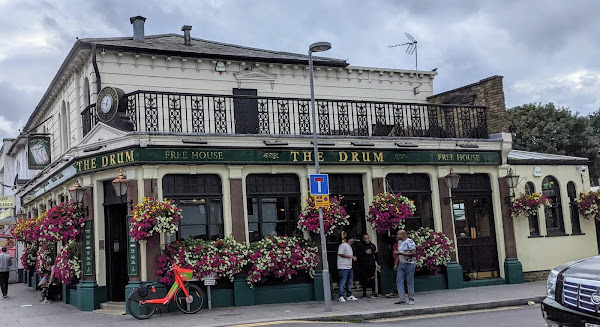 The day of the game came and it was a hard slog at work as usual on a Friday. To make matters worse, I forgot my change of clothes and so, not wanting to have to go to football in my work uniform, had to call back home. It was a nice quick turnaround though and I was parked up near Amersham station by 3.35. After a five minute walk, I was at the station, having just missed the Metropolitan Line train. I had seven minutes to wait for the Chiltern Line train, having to switch over at Harrow on the Hill to the Metropolitan, and then over to the Bakerloo at Baker Street before changing into the Victoria at Oxford Circus. Despite my differing destination to last week, it was still Walthamstow Central that I was aiming for, though with time-limited, my pub choice was different. The journey took longer than I would have hoped, with me getting to Walthamstow at 5.25. It was then a 15 minutes walk through streets that looked like the opening titles to Only Fools and Horses to get to the Drum in Leyton. Whilst I was there, I had two pints of Gwynt Y Ddraig Black Dragon, a bacon and chicken panini, chips and a soft drink to take with me for under £11. All very nice and great value and in a pleasant if slightly noisy atmosphere. It was then a bus to Woodford station and a walk to the ground from there. I stopped at a shop for drinks and snacks en route. I got to the ground ten minutes before kick-off, paying £7 to get in. I didn't bother with a programme, later picking one up off the floor for free. 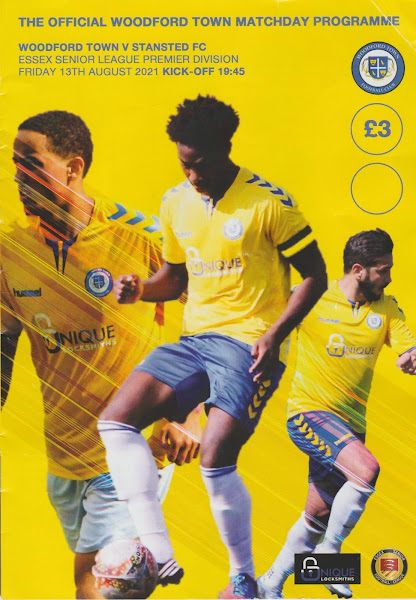 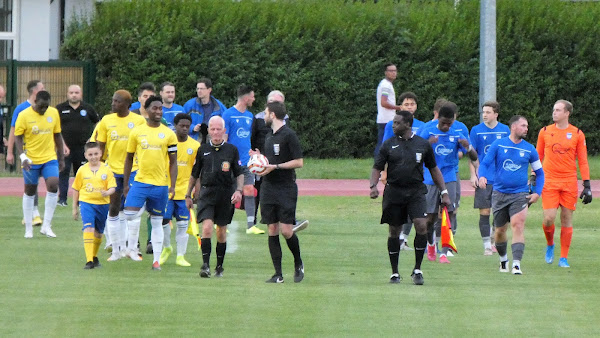 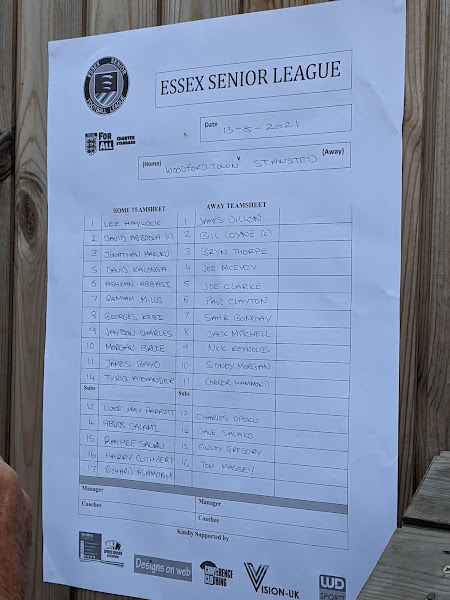 Woodford Town had struggled at times during last season and had not had the happiest start to this campaign. They'd been thumped 6-1 at Cockfosters on the opening day and 4-2 at Redbridge on Tuesday. In the FA Cup, they'd put up a brave fight, losing 3-2 to Witham Town. Stansted had been in far better form, winning both of their league games - 2-1 at White Ensign and 3-1 at Ilford. The only blot on the landscape was the FA Cup where they were soundly beaten 4-0 by Basildon United. I stood on the grass bank behind the goal with fellow hoppers Dan and Joseph and watched a dire first half. The second half sprung into life on 55 minutes with Stansted opening the scoring with a header. Woodford equalised with a penalty awarded for a trip around four minutes later. On 70 minutes, Stansted retook the lead, a ball in from the right was bundled home to make it 2-1. That was it as far as the goals were concerned and in truth, despite the vastly improved second half, it wasn't a good game.

After saying my goodbyes it was a 20-minute walk to the station. Due to the game finishing late after an 8pm kick-off, it wasn't until 10.10 that I got there. It was another ten minutes wait for the train. It was a different route on the way back with me changing to the Jubilee at Bond Street and the Metropolitan at Finchley Road. I was hoping that it would be simple from there but as with last week, Amersham was neglected in favour of Watford and Uxbridge. I got the second train to Harrow On The Hill as I could get the Chiltern line from there. There was a 50-minute wait for that train but at least I was on my way home. I put the London Underground song on to cheer myself up but it is ludicrous that a full week after I suffered the same fate, they are still running their pitiful 'special service'. Not that you'd guess from the official TFL site which was still advising me to get a non-existent train. I was in at 1 am. Whilst not the finest day of my groundhopping career, I was glad to witness a part of history as part of an 822 crowd. I hate to be critical of their new home, but I feel it is more important to be honest than anything else.

THE GROUND
ASHTON ATHLETICS TRACK is not a good place to watch football. The only cover is a metal stand and due to the athletics paraphernalia and a large track, it is set way back from the pitch. The same is true for all the hard standing around the pitch. There are some grass banks that offer a bit of elevation, but the game and the rest of the fans are still very distant. Despite all this, it's great to see Woodford home but it
There's a good selection of food at the ground and also a bar. I didn't try either but there is also a huge range of shops and takeaways around. There's a decent public transport network with the ground located halfway between Woodford and South Woodford stations. The Woodford fans make some good noise and the club social media is excellent but it's not the sort of place you'd want to do more than once as a groundhopper. 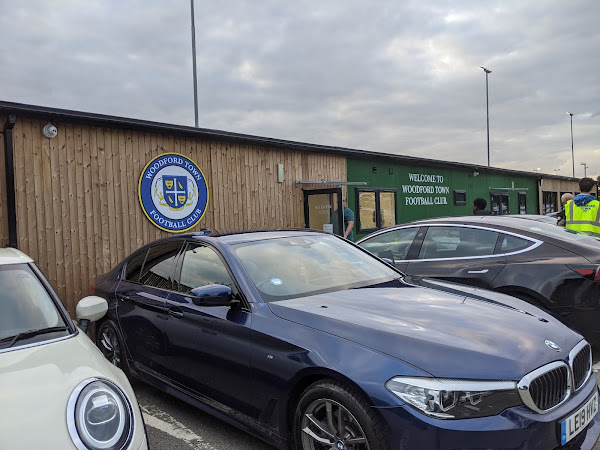 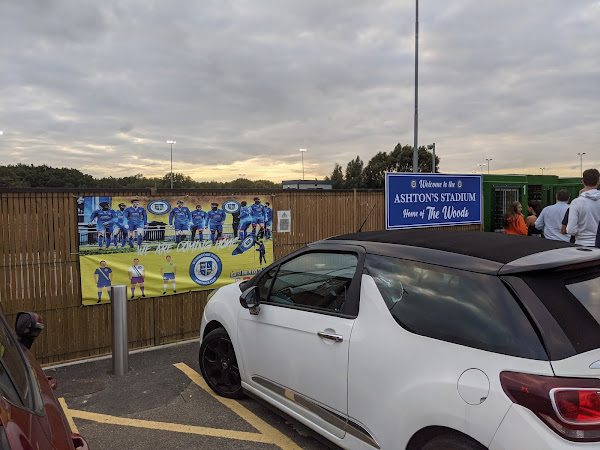 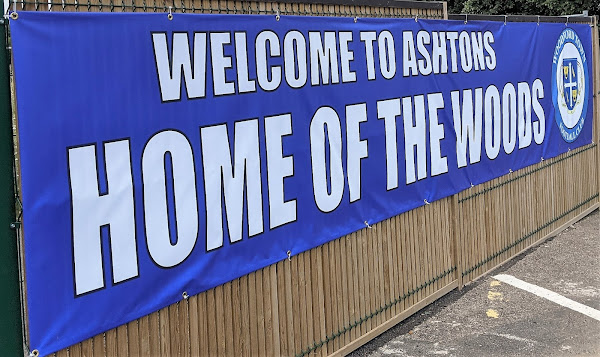 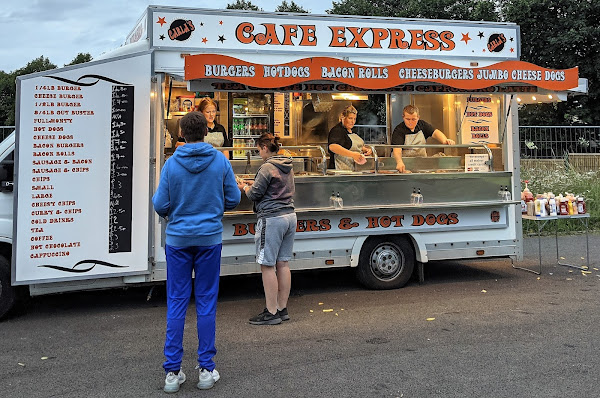 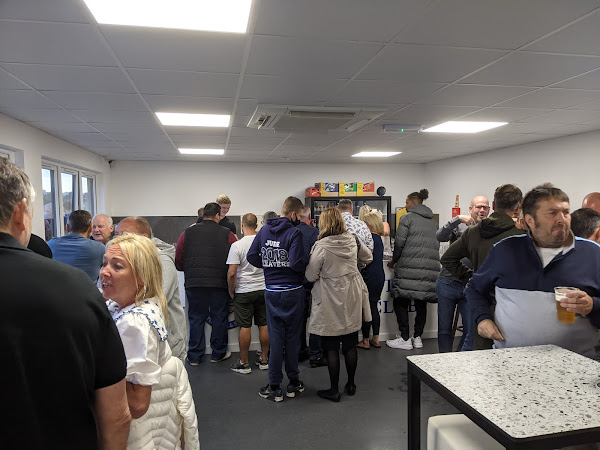 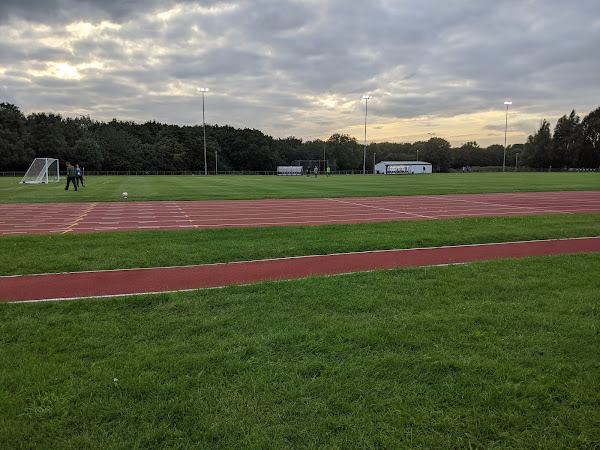 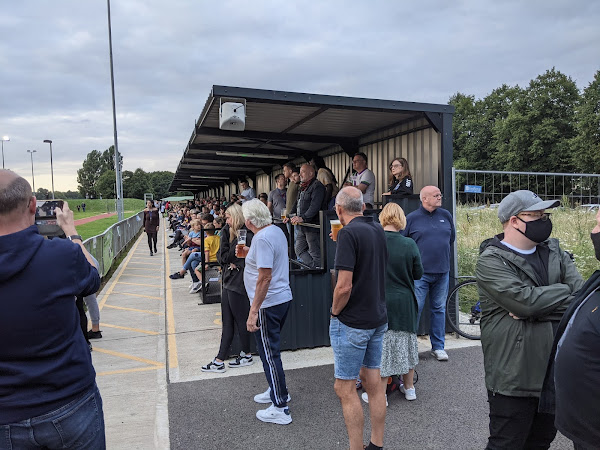 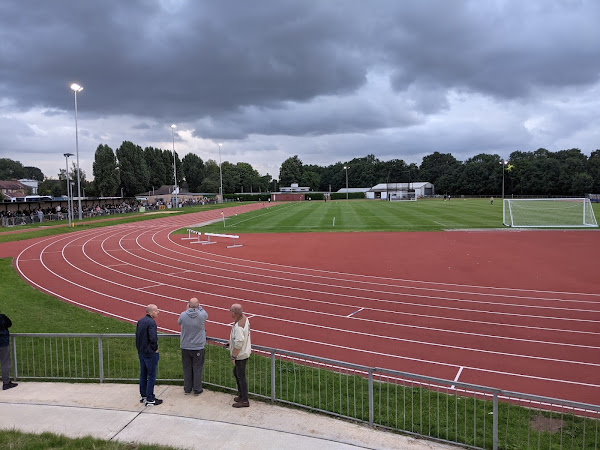 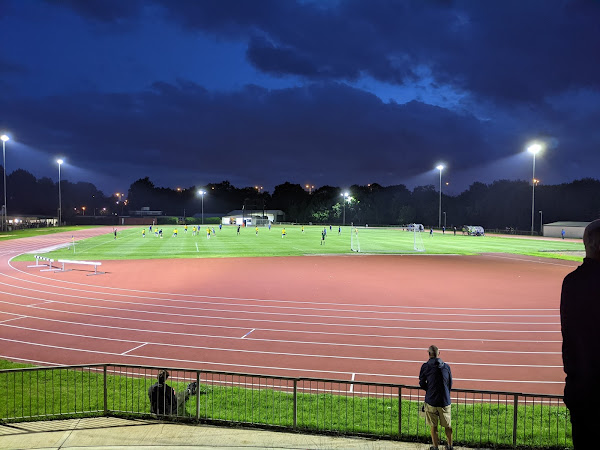 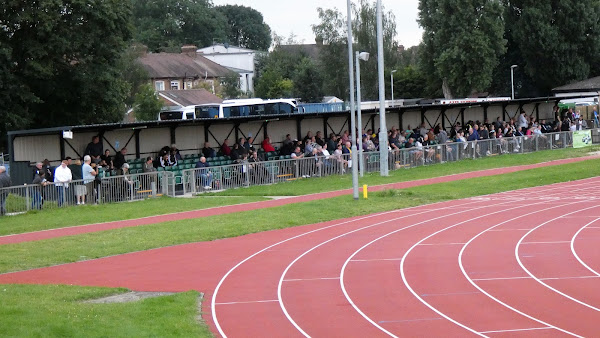