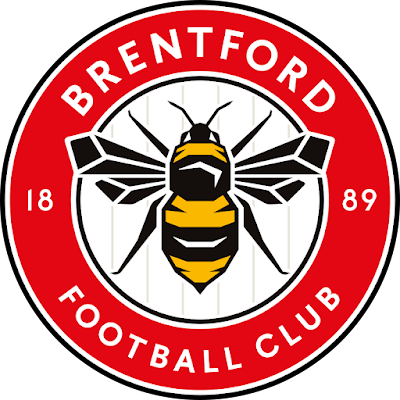 Brentford FC
Brentford Community Stadium
166 Lionel Road North
Brentford
London
TW8 9QT
0208 8472511
Official Website
Twitter
Ground Number: 986
Tuesday 24th August 2021
Brentford 3-1 Forest Green Rovers
League Cup 2nd Round
BRENTFORD AT THE COMMUNITY STADIUM
Brentford played at the wonderful and iconic Griffin Park for 116 years before they moved to their present home. The stadium had been a long time coming. After years of planning, concrete plans were put in place in October 2002. It would take another five years for them to secure the site via Barratt Home and then in 2008 a partnership with Barratt Homes was announced to finance the deal. Another four years passed when in 2012 the housing developer sold the site to the football club. The original plan was to open the ground in 2016 but hitches meant that work didn't start until a year later. Finally, in 2020 the stadium opened with a friendly against Oxford United. Wycombe Wanderers played the first competitive match at the new ground, drawing a League Cup game 1-1 before Brentford prevailed 4-2 on penalties. Brentford also gained their record win at the new stadium against the Chairboys as they won 7-2 at the end of January. It was a happy first season at their new home as the club finished 3rd and was promoted via the playoffs beating Bournemouth & Swansea to reach the Premier League. The whole of the season was played behind closed doors due to the Covid 19 pandemic. After a series of friendlies with fans back the first competitive game with a full stadium was a happy one as they beat Arsenal 2-0 in their opening Premier League game. The ground is also used for rugby with London Irish playing at the stadium following a move from Reading. 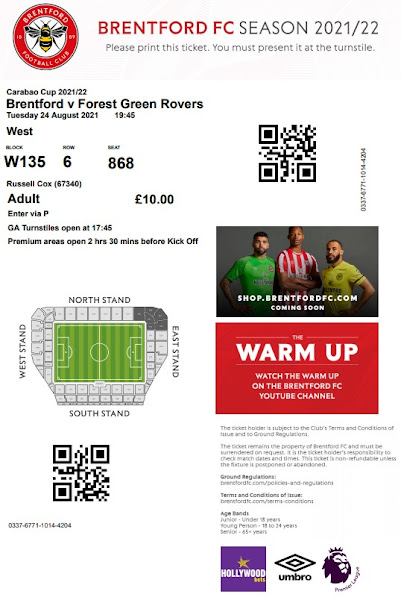 MY VISIT
I'd spotted this potential game the week before but really wanted to save it for when they played Wycombe if possible. I was really hoping that an FA Cup replay would come up, with Loughborough Dynamo my preference. However, when I looked, the nearest was a fair trek to AFC Portchester, which would mean going back on myself if I took Anwar. Suddenly, a half-day out in London and ticking off one of the two grounds I needed to complete the 92 was looking attractive. I ordered the tickets online with them costing a bargain £10 each. That was half the ludicrous £20 York City were charging to watch a struggling Conference North side. I did all the planning on Sunday and  Monday. I discovered that the train fare was on the higher side at £11.60. That was only £2 less than an all-day travel card so I decided to take a day out of it. It would be nice to visit my old haunt of Borough Market. I'd had a boozy Saturday and would have to drive later so I was going to take it easy. Sadly, the Metropolitan Line were still running their terrible 'emergency service' due to a shortage of drivers. I did explore driving to other stations that would offer more options for coming home. Most would involve quite a drive, so I opted for Chalfont & Latimer which offer a few more trains but was only two miles extra. 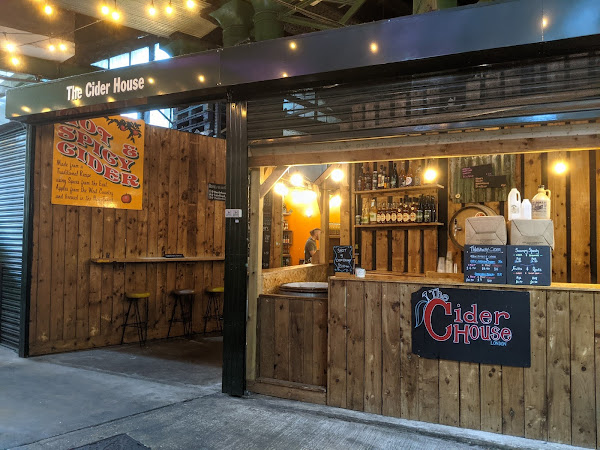 The day of the game came and I'd had a mixed nights sleep. I got up around 8 and had breakfast and a shower. At 9.30 I took my usual 8-mile walk to town and back which was nice exercise but a bit strenuous in the heat. I picked up a few bits of shopping before getting home around 12.45. I had a fish panini before getting my things together and leaving at 1.35. I normally leave my car overnight when travelling from Chalfont and so parked in Cumberland Close which had no restrictions. It turned out that I passed several roads where I could have parked freely for the afternoon but what's done was done. It took just over 10 minutes to get to the station, with me then having just a five-minute wait for the 14.13 Chiltern Railways train. I changed to the Metropolitan Line at Harrow on The Hill, the Jubilee Line at Finchley Road before getting off at London Bridge. I was there by 3.15 and so walked to my desired cider stall. It really was a great place and not having been for two years, I decided to splash out. A 750ml bottle of Olivers One Juice was purchased for £13. It was one of the makers I trust most and it certainly didn't disappoint. It was the best I've had in a long time and so it should be at that price. My second bottle was a Silly Moo Unfiltered, again a nice drop, but more affordable at £4.80. It was an excellent establishment and Borough Market was superb overall with so many unusual food stalls. You really could taste the flavours of the world if you wanted to. But with me planning to get something nearer the ground later, I walked down to the River Thames. I decided to take an alternative route to the ground, going via Mansion House and getting the first District Line train to Chiswick Park. No doubt it wasn't the most logical route but I fancied exploring. It was then a 25-minute walk to the ground but at least I'd avoided the crowds. 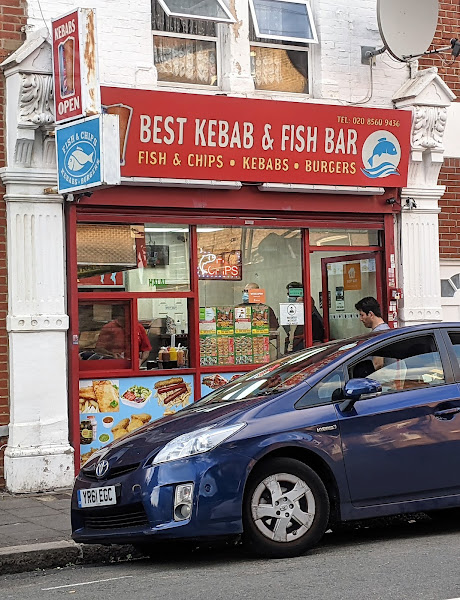 I met Anwar near the Express Tavern which looked decent. The options for food were really scarce although to be fair, I'd walked past a couple on the way to Anwar. We ended up walking all the way to the old ground, Griffin Park, around 20 minutes in all. The 'Best Kebab & Fish Bar' shop was pretty decent with a half-pounder meal a decent effort for £7. I decided to add it to my football costs though as it was something I'd had several times before. We'd seen fellow hoppers Jack Warner and Dave Finch on the way and all in all, a lot of people were ticking the ground off. We were at the ground by 7.15 and there were huge queues to get in. They were dealt with fairly quickly though and we were in by 7.30. The tannoy was really loud and it was nice to hear the same announcer reading out the teams as who has been on duty for at least the last 20 years. We were sat next to another Wycombe fan by pure chance and I recognised plenty of people that had checked in. The view was dreadful though, right behind the goal which blocked our view. It was a consequence of getting one of the last available seats, although most of the other end was closed. We moved in the second half to a slightly better seat higher up but the sightlines still weren't great. At least we could see most of the pitch though. On the pitch, it was a game of two halves - Forest Green excellent in the first and going into the break 1-0 up. Brentford bought on their big guns in the second half and showed their class. A match report of the game is below.

After the game, we left a couple of minutes early to avoid the crowds but still had a ten-minute wait at the station. We were in good spirits as Wycombe had beaten Stevenage in the League Cup. We'd gone ahead, gone behind and then got an equaliser in the fifth minute of injury time. The scorer of our last gasp goal, Gibraltar International Tjay De Barr also netted the winning penalty and all this on his professional debut. We got back to Waterloo at 10.25 and as the state of the Metropolitan services were unconfirmed, I headed back to Marylebone with Anwar, knowing that there was a train that would get us both home at 10.57. It went as scheduled and I was back at Chalfont by 11.30. Ten minutes later I was back at my car and I was back home before midnight. It had been a successful day ticking off a bigger ground but aside from Wycombe games, I prefer non-league by a mile. A few hoppers that I know have caught Covid from going to England and Premier League games and it's easy to see why. I did my best to avoid crowds tonight but there was still a couple of pinch points that I'd have rather avoided. 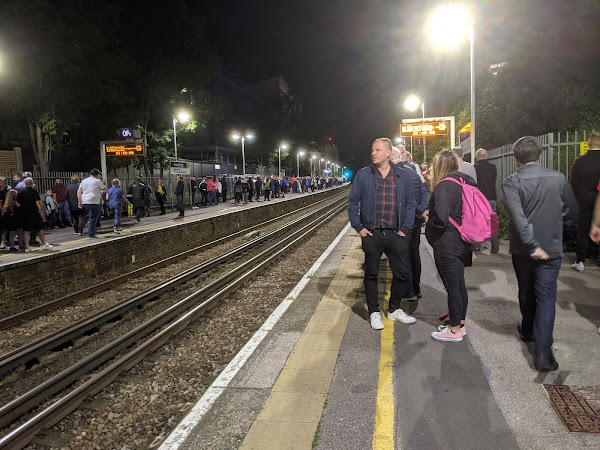 THE GROUND
THE BRENTFORD COMMUNITY STADIUM is a bit of a mixed bag. Though it lacks the character of Griffin Park, it is of a smart design and the legroom is excellent. Some of the seats don't have the best view though.
There's a reasonable range of food and drink in the ground but this comes at the usual premium you'd expect. The choice of places around the ground is pretty poor. There's a pizza place and a shop called Cluck Yeah five minutes away but otherwise, the nearest places are about a mile away near Griffin Park. The 'Best Kebab' place was decent but it might be worth stopping en route. The public transport links are excellent though but I didn't see a lot of places to park. 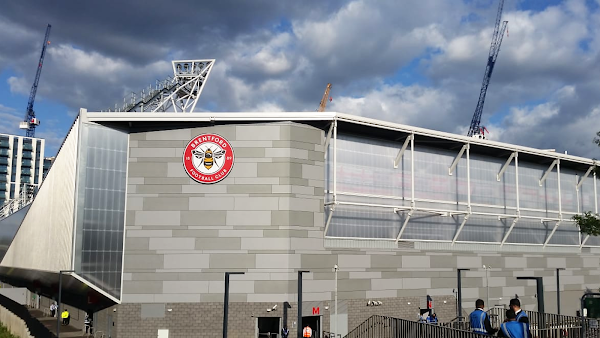 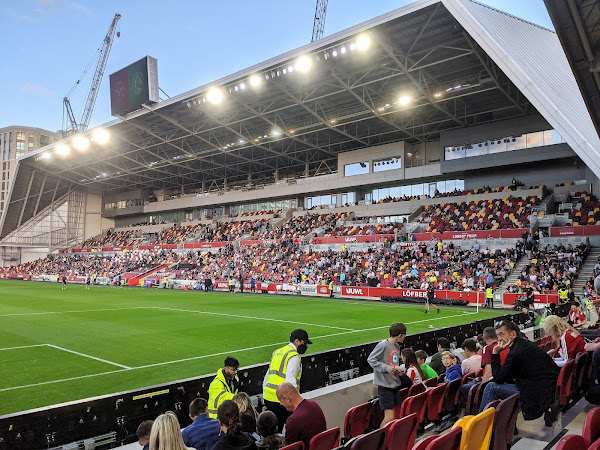 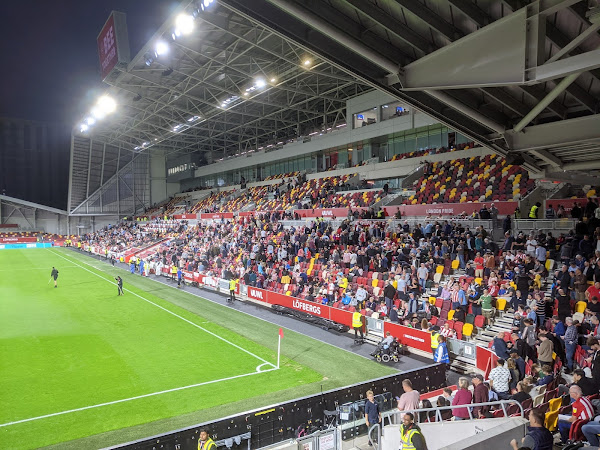 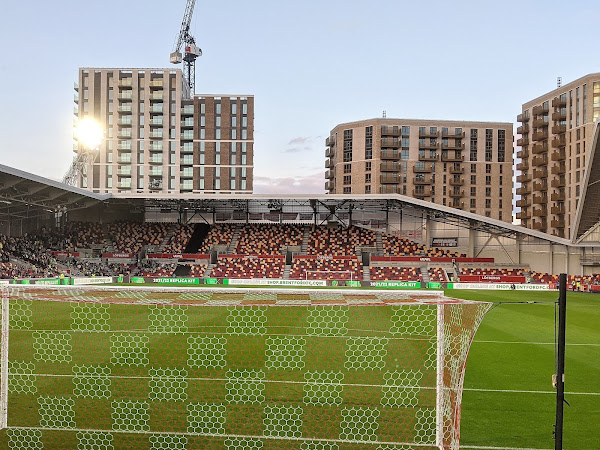 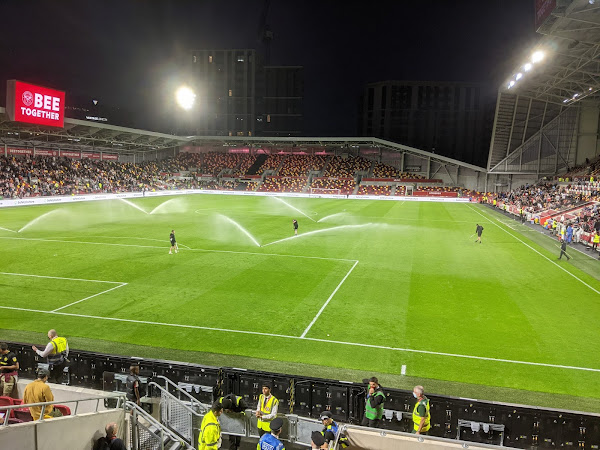 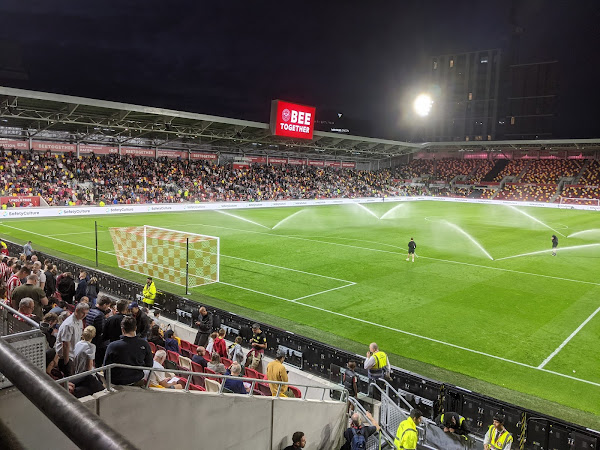 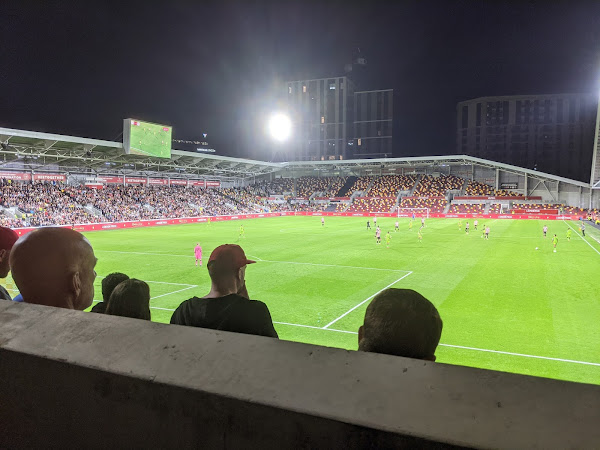 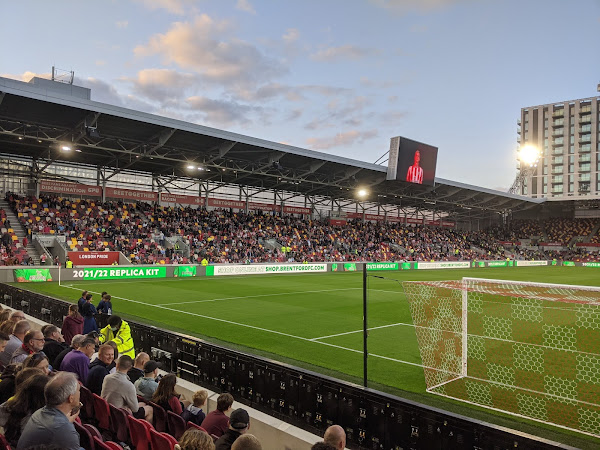 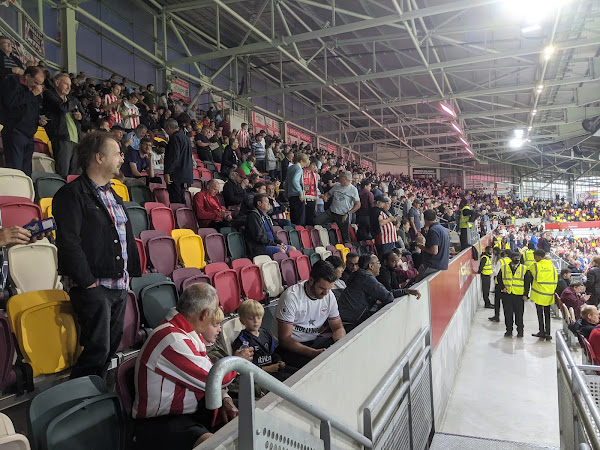 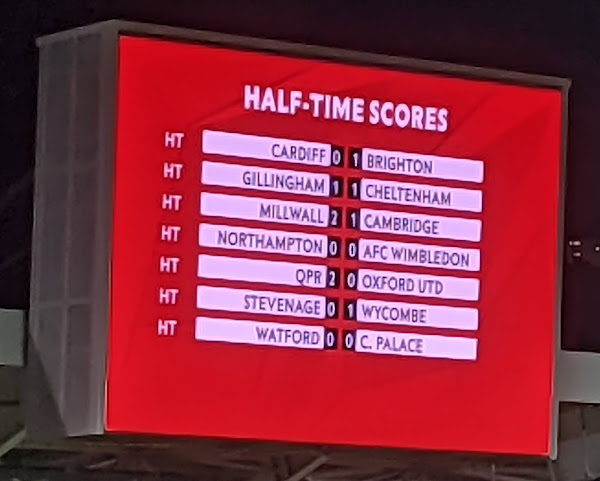