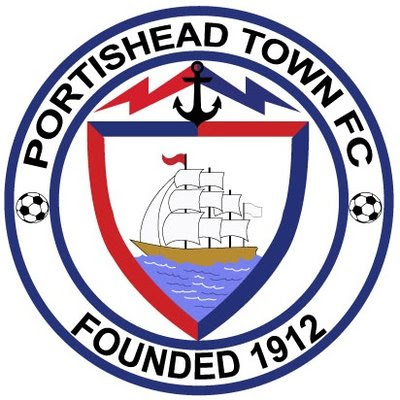 The club was established in 1912 as St Peters Portishead, changing their name to Portishead in 1948 and then Portishead in 2008. They played in local leagues up until 1975 when they joined the Somerset County League. They were largely successful here, finishing as Premier Division champions four times and runners up on a further four occasions. In 2005, they made the step up to semi-professional football, joining the Western League Division 1. Their best finish came in 2007 when they finished as runners-up to Truro City, however, they were unable to take promotion due to lack of floodlights. These have since been added, but the form has tailed off since. In recent years, 6th  in 2016 has been the best (and only top-half finish) they can muster since. Prior to my visit, they were sitting in 15th place.

Portishead's best run in the FA Cup came in 2016 when they overcame Sherborne Town, Wells City and Shepton Mallet prior to a 4-1 defeat against Swindon Supermarine in the 1st Qualifying Round. The previous year saw their best-ever run in the FA Vase when they reached the 1st Round before going out to Newport IOW. Local cup wins include the Somerset Senior Cup (1997 & 2008), the Somerset Hospital Cup (2009) and the Attwell Memorial Shield (2009 & 2015). The town of Portishead has a population of 25,000 and has long been a fishing port. It has also been in the past home to a dock and several power stations, but these have long since closed. Despite its fairly small size, Portishead has produced a number of famous people. Most well-known is the band of the same name but people with links to the town include Johnny Briggs (Mike Baldwin in Coronation Street, Adge Cutler (former lead singer of the Wurzels), comedian Eddie Large and TV presenter Carol Vorderman. 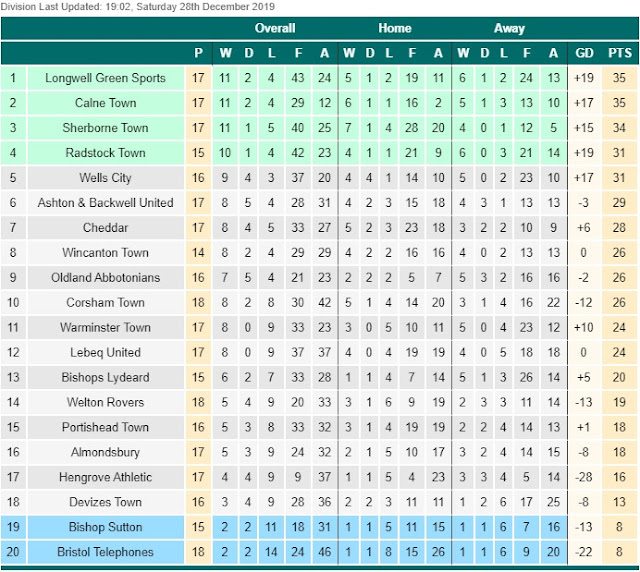 When I decided that I was going to revisit Bristol City for a game, I was very keen to double it up with another game, what with it being an early kick-off. Once again, the Futbology (formerly Groundhopper) app proved to be my saviour with it being a simple case of placing the pin near Bristol City FC and clicking the 'nearest fixtures' button. There were a few that I'd been to but the nearest 'new tick' was Portishead and happily, it was a single bus ride away. The only issue was that it would entail missing part of one (or both) games, so that was a decision that I'd make on the day. When researching the club a couple of days before, I noted that their chairman was Mark Stallard, disappointingly, it was not the former Wycombe Wanderers striker. I also noted that they'd been on the final Western League hop earlier this season, sadly, I was unable to make it, a Wycombe home game meant I was already busy that day. I left Bristol City on 90 minutes, having six minutes wait once I got to my bus stop. The bus took me within walking distance of the ground and I was in by 3.10, a fiver a good price for entry. 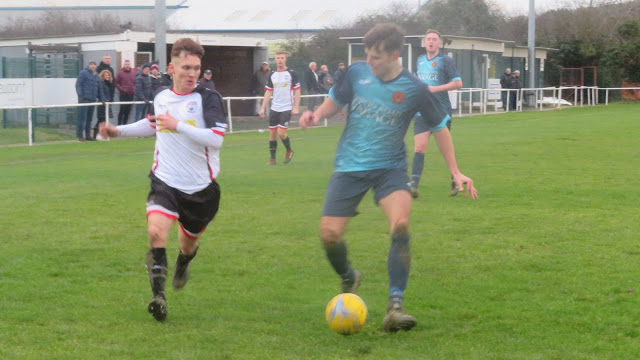 Looking at the form, Portishead Town had a mixed December. They'd started off with a respectable draw at Oldland Abbotonians before recording their only victory since September as they beat Lebeq United on 7th December. The month had concluded with two 2-1 defeats at Warminster Town and Ashton & Backwell United. Corsham Town had lost a couple of games due to the weather in December, but their form was better. Their month started with a 0-0 draw against Cheddar but had since recorded home wins over Downton (3-1 in the Wiltshire Senior Cup) and Warminster Town (2-1). I arrived ten minutes in and the first action that I saw was Corsham hitting a free-kick over but the game was fairly equal. After 38 minutes, a ball over the top found Josh Bright and he rounded the goalkeeper before finishing from the edge of the area. The lead was doubled on the hour when a brilliant strike from Luke Curtis whose shot from outside the area found the top right-hand corner. Both sides had an equal amount of play, it was just that Corsham knew what to do with it in the final third. It took Portishead until the 75th minute to test the Corsham keeper but even then the shot was well smothered at the bottom left-hand corner. There were 60 in attendance, but the majority would have gone home disappointed despite their side battling hard. 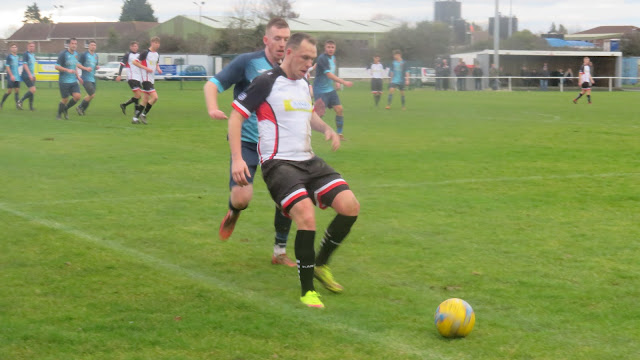 After the game, I made a quick retreat to catch my bus. I should have got one at 5.05 but a company called Skanska had other ideas and fenced a huge area of public space off. This meant a 15-minute detour as I had to go via road. Eventually, I found where I was supposed to get my bus and found out I had a 25-minute wait. It was in the back end of beyond but thankfully the bus turned up as scheduled. It had taken up all my drinking time but at least I was on course for my coach home. It was the precise reason why I factored in plenty of margin for error when planning trips. I was back at the coach station with half an hour to spare, though I was unable to find any off-license within reasonable distance on Google Maps. Instead, I headed to Greggs where I had a ham and cheese toastie, chicken bites and a drink from their diminished stocks. The coach left reasonably on time with me listening to the FA Cup football on my phone. I was back in London just after 9, getting dropped off at Earls Court as I’d spotted a big Tesco and I needed some shopping. Some Old Rosie was procured for later but I also got some chicken and soft drinks for the journey. It was half a mile to the station then after a change at Paddington, I had a 15-minute wait for my train to Amersham. I was back at the station at 10.50 and got home 20 minutes later. I had no work in the morning so had a couple of ciders while typing my blog and watching various TV shows. 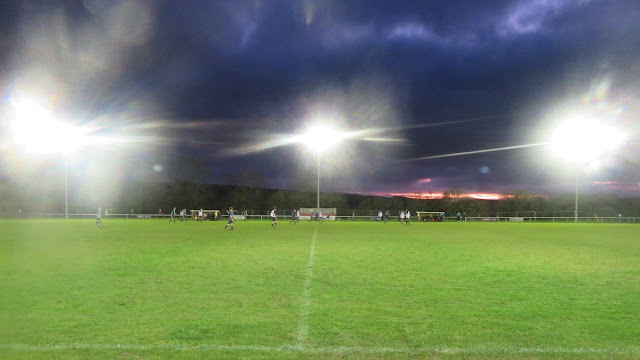 Bristol Road is one of the more basic venues in the Western League. Its situated a fair way from town with not a lot around it. At the ground is a bar offering a reasonable range of drinks and a tea bar with drinks and snacks. The ground itself consists of a proper covered area holding around 50 standing plus an 'arena' flat-pack seated stand for around 50. The rest of the ground is open and has a pleasant rustic feel. 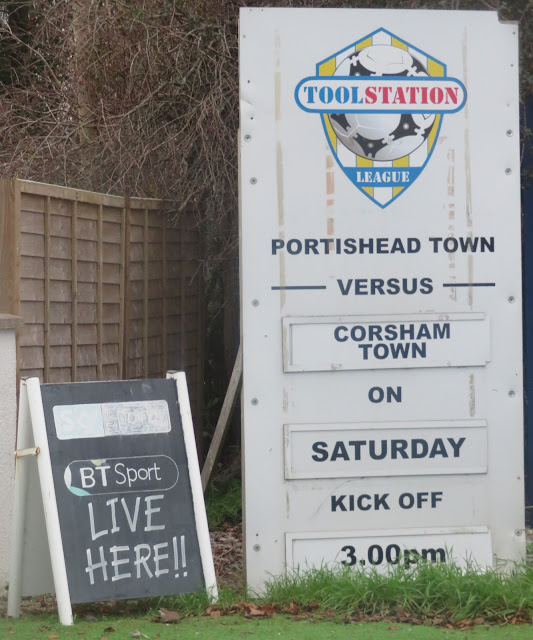 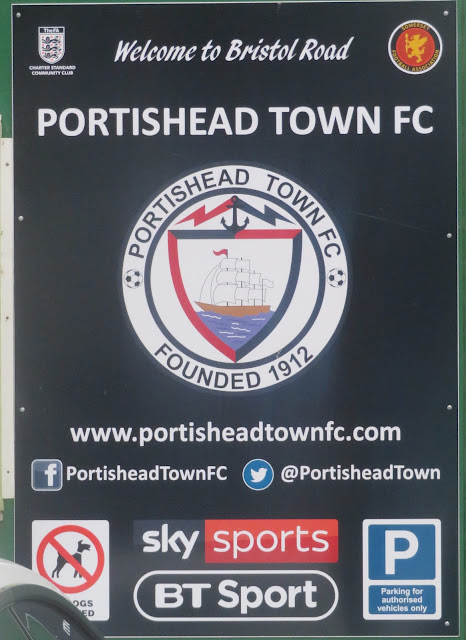 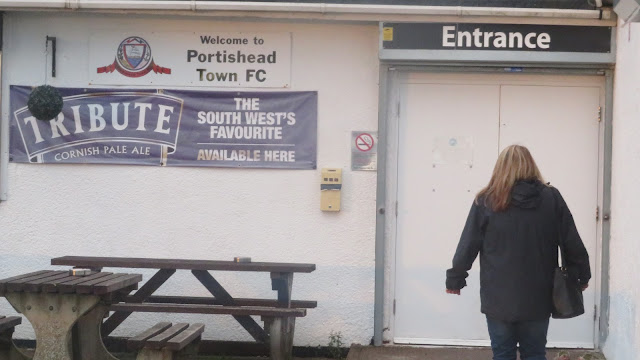 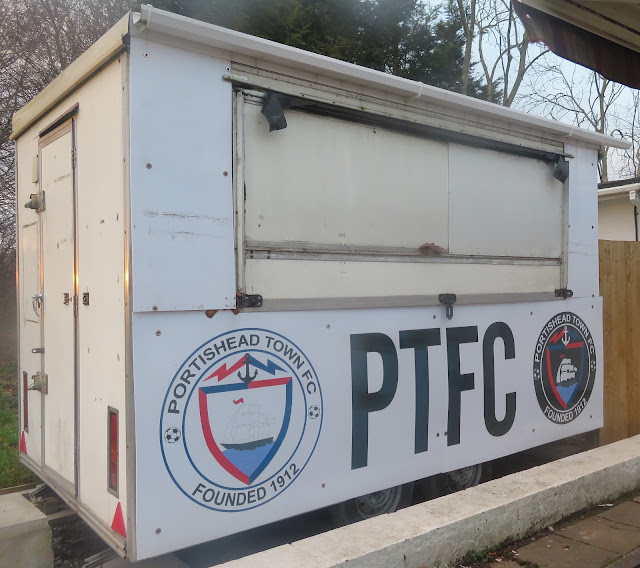 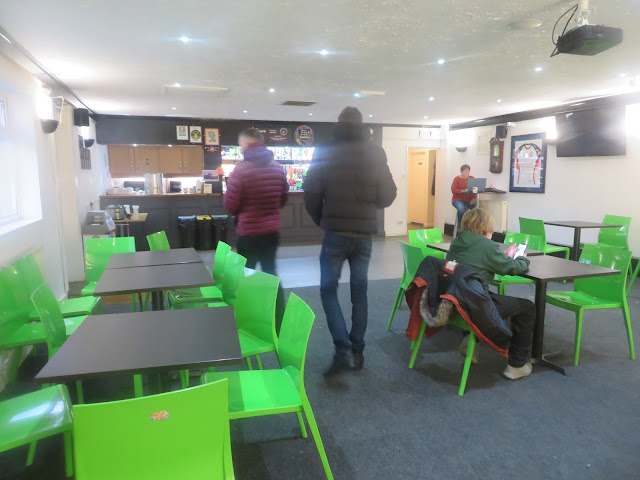 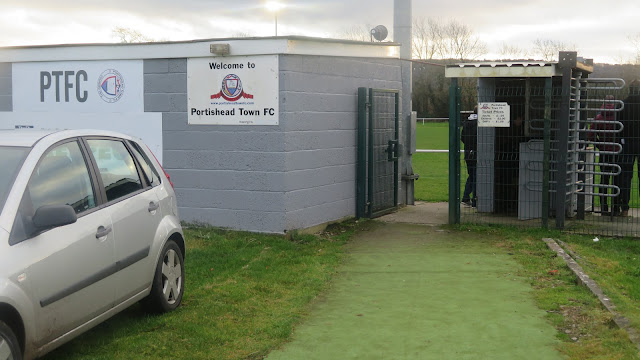 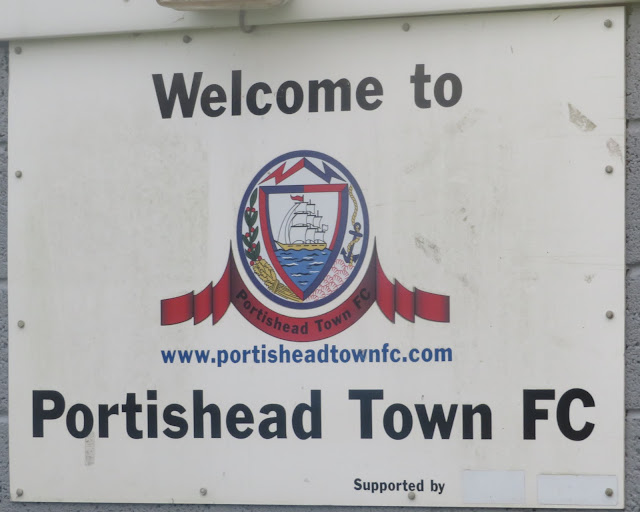 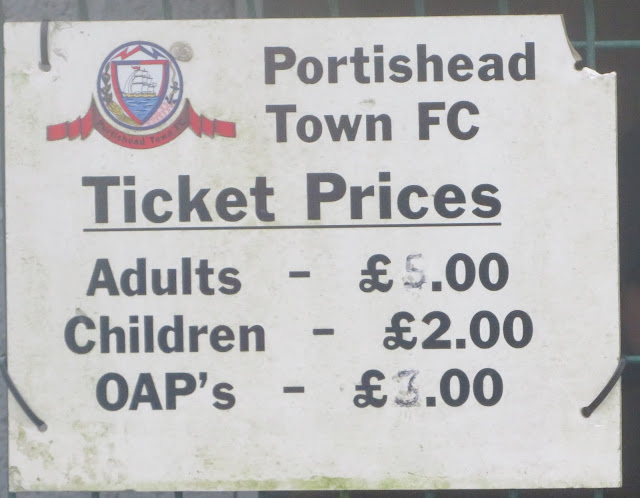 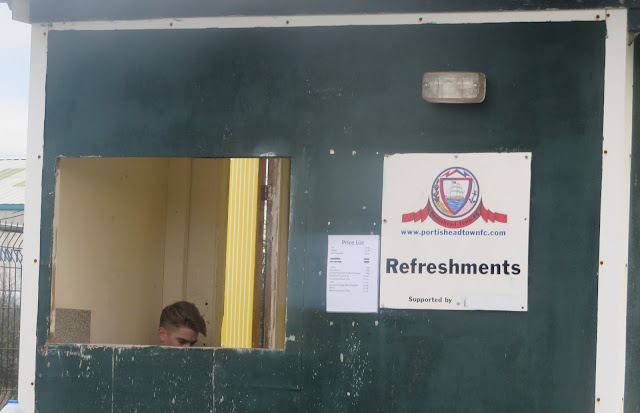 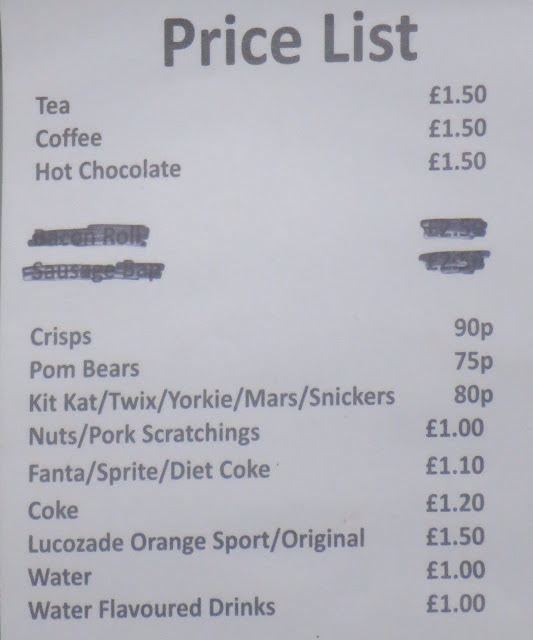 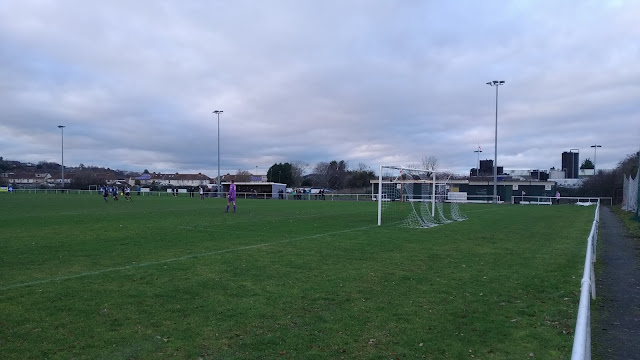 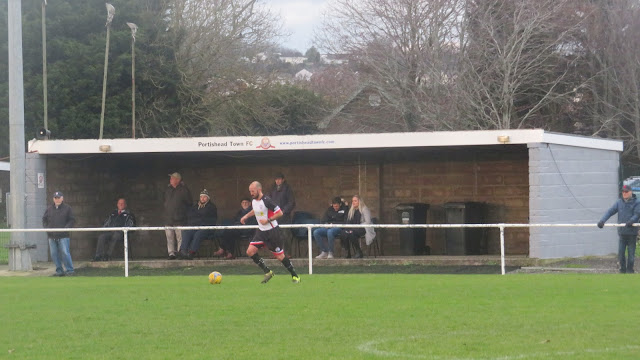 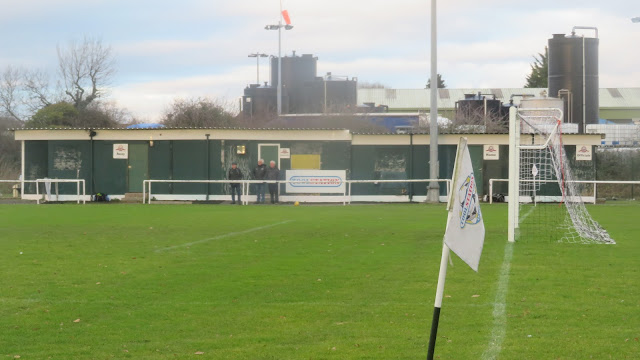 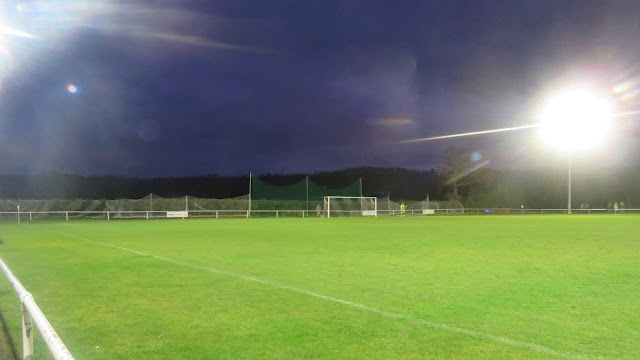 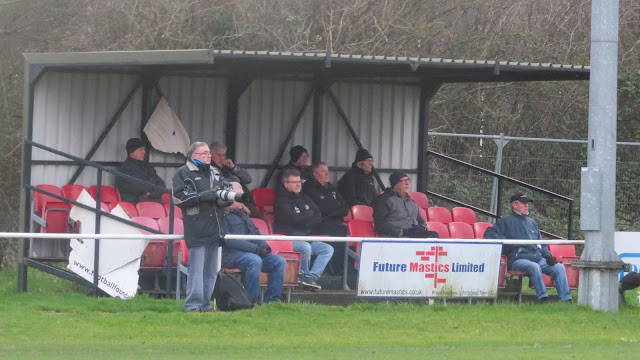 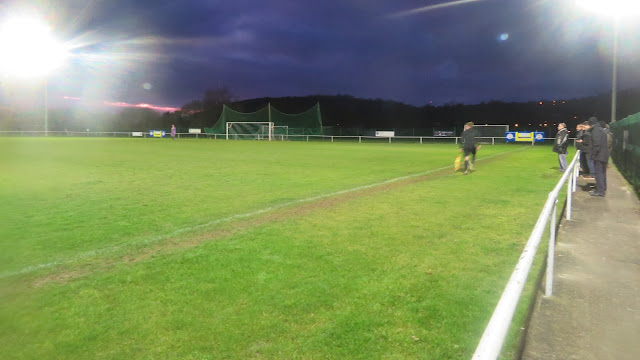