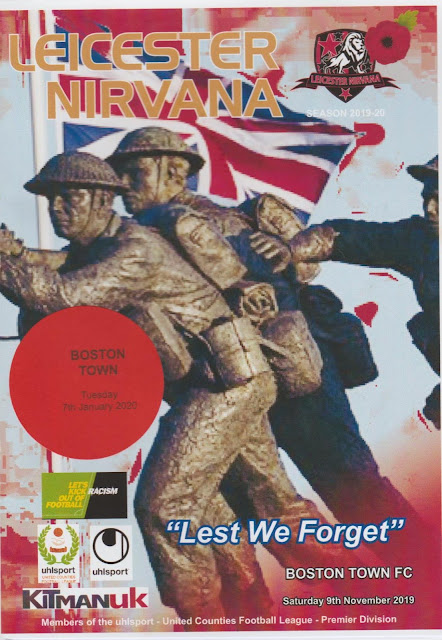 The club was formed in 2008 as a result of a merger between Thurnby Rangers and Leicester Nirvana. Starting out in the Leicestershire Senior League Premier Division, a 3rd place finish behind Thurmaston Town and Leicestershire Constabulary. As a result, they were promoted to the East Midlands Counties League. They were champions in 2014, winning promotion to the United Counties Premier. They've been there ever since, their best finish being runners-up in 2015 & 2016. The latter of these saw them come so close to promotion, losing out to AFC Kempston Rovers by just two goals. Finishes have been more modest since but prior to tonight's clash, things were going well with the team sitting in 7th prior to tonight's game.

The best run in the FA Cup came during their debut season of 2011/12. Desborough Town were beaten after a replay and St Neots Town were defeated prior to a loss to Barrow Town in a 1st Qualifying Round replay. In the FA Vase, Leicester Nirvana reached the 5th Round. FC Bolsover, Wellington Amateurs, Saffron Dynamo and Westfields were beaten before a defeat in the 4th Round to Coventry United. However, they were reinstated after their opponents fielded an ineligible player. However, they went on to lose at Canterbury City in the 5th Round. Local cup wins include the East Midlands Counties League Cup in 2011. 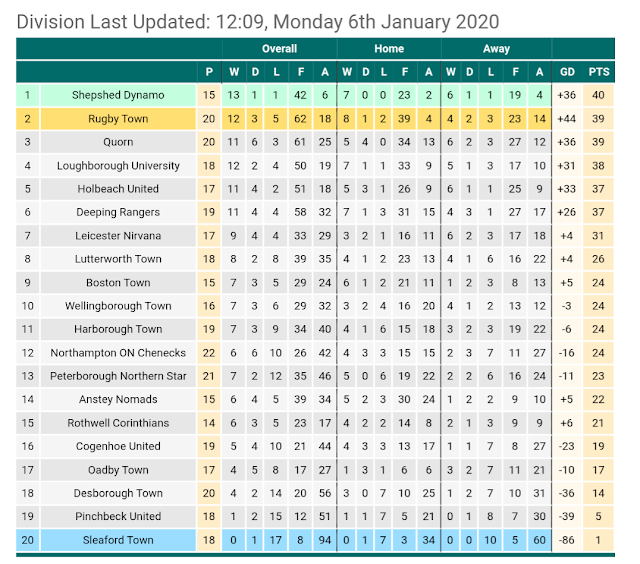 I'd had a few days off in the build-up to the game, as I thought about the possibility of Wycombe getting a decent FA Cup 3rd Round tie. That was back in September but Wycombe subsequently bowed out to Tranmere Rovers in the 1st Round. I'd made the most of my Saturday, doing two games in Bristol - a revisit to Bristol City and a new ground at Portishead Town. Sunday was meant to be a revisit to Billericay Town to see a women's FA Cup match, but despite passing an earlier pitch inspection, the referee called it off an hour before kick-off. It was typical of my least favourite day of the week and of officials zero respect for fans by calling games off at the last minute - the week before I'd had a game called off eight minutes before kick-off at Stowmarket. On Sunday I was already at Basildon although I did at least buy the new coat I'd been looking for and have a nice lunch to get something out of the day. On Monday, I'd considered going to Whitchurch Alport but dismissed it due to the weather, in the end it was called off due to bereavement at the club. I did consider a revisit to Woodley United but opted out in the end as it was a decent nights TV. It was probably the right decision in the end as they played out a 1-1 draw with Abingdon United. 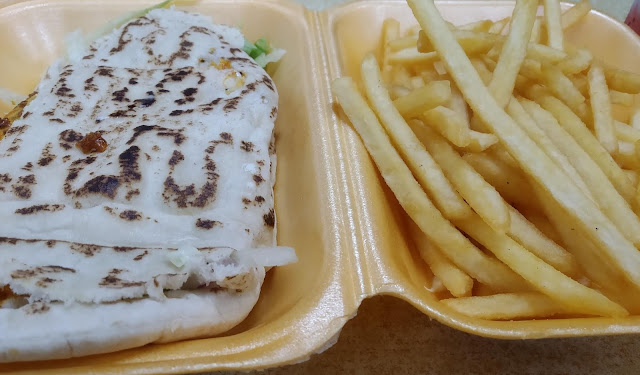 The day of the game came and I awoke at around 8 after a good nights sleep. I had a relaxed morning getting ready, mainly doing research for tonight's blog. I noted from the Tuffley Rovers Twitter that a pitch inspection had been arranged at 3.30. My research told me that there had been little rain over the past 24 hours and that Tuffley was not known for an especially bad pitch, but it was better to be safe than sorry. I pre-arranged a list of backups as I'd already be on my way when the inspection was taking place. The leading candidates were Leicester Nirvana and Saffron Dynamo or Thornbury Town in the case of a later call off. After a nice lunch, I spent my time checking backups for news of pitches and also planning in food places should the need arise. After I got myself together, I left at 3.20. I had to stop for petrol on the way, paying 4p a litre more than I did a week ago thanks to the price of oil shooting up. I got caught in schools traffic and so didn't get to Anwar until 4.05 By then, the Tuffley game had been called off, I was surprised, but was glad that they had made the early decision. Anwar was happy with anything and so having done some of a Leicester Nirvana blog for an aborted visit earlier in the season, I opted for that. We left at 4.15 and made slow progress getting through Aylesbury and Milton Keynes, a diversion being followed before we got on the M1. For once, that road was well behaved and we were in a suburb of Leicester by 6.20. There were a number of takeaway options, but a place called Peri-Peri Flames was our chosen option. I went for a Peri-Peri Pitta meal, this came in at £4.50 with fries and a drink and was freshly cooked and delicious. We were in no rush and arrived at the ground at 7. Parking was a bit tight and after choosing a spot I sat in my car for a bit, going in at 7.15. Entry was a bargain £5 and when clubs don't take the mick with prices I like to give a bit more. So I got a programme and some samosas which were both good for the price paid. The club was nice and friendly and I presume Asian owned and run, hence the decent food. 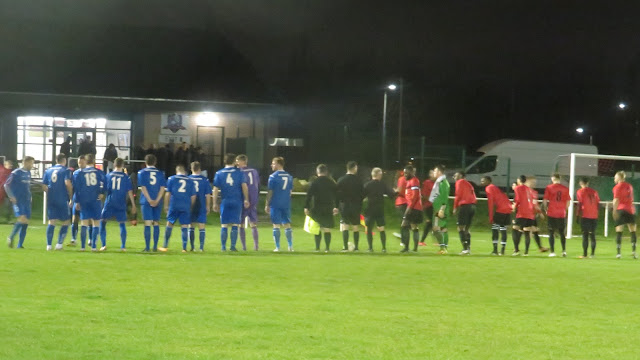 Looking at the formbook, Leicester Nirvana were in decent form but had had to do a bit of travelling. In their last six, they'd won three league games on the road at Harborough Town (2-0), Desborough Town (2-1) and Pinchbeck United (2-1) as well as drawing at Anstey Nomads (2-2). They'd gone out of the UCL Knockout Cup 2-1 at Loughborough University as well as losing 2-1 at home to Hellenic runaway leaders Westfields in the FA Vase, the latter being my intended visit originally. Boston Town were in even better form, though they had home advantage. They'd won their last five at home - 3-0 against Rothwell Corinthians, 5-1 against Blackstones, 3-2 against Quorn, 2-0 against Oadby and 1-0 against Cogenhoe United. On the road, they'd drawn 2-2 against strugglers and local (ish) rivals Sleaford Town. The hosts started brightly but had little end product. The visitors took the lead around six minutes in, Frazer Bayliss being felled as he attempted to round the home keeper Liam Castle. A penalty was awarded and this was converted by captain Lee Beeson to give Boston the lead. Nirvana tried to get back in, a shot on the turn going just wide a couple of minutes later. The high winds made for a poor first half with few chances for either side. The hosts came closest just before half time, a good corner was put in and a shot was smothered at his near post by visiting keeper Travis Portas. As well as the blustery conditions, the referee was dragging his heels and slowing the game down which made for a disappointing first half. Thankfully, the second period was much better. The hosts started carving out chances and they equalised on 59 minutes. A ball was put over the top and Deen Master put a looping header over Portas from ten yards out.  Five minutes later, the visitors were back in front. a long ball found Alex Beck and he crashed in a lovely shot off the bar from the edge of the area. It was a physical contest at times with Boston Town looking the more streetwise and trying to referee on their side.  Seven minutes from time, Leicester Nirvana got their equaliser, a good through ball found Daryl Russell who finished from just inside the area with a low shot. The hosts might even have won it at the death, but they screwed a shot wide when it might have been easier to score.


Boston Town penalty last night at Leicester Nirvana. Beeson the scorer which gave them the lead on six minutes. They went ahead again on 64 minutes but equalisers from Master on 59 and Russell on 83 saw the game end in a 2-2 draw.
A post shared by Russell Cox (@russ_wwfc) on Jan 8, 2020 at 1:28pm PST


The attendance hadn't been announced at the time of writing this blog, but I'd guess around 40 were treated to a poor first half but a better second half. It hadn't been the best ground for my 900th, but as so often happens, it was a good club to visit. The match finished pretty late and it was 9.50 by the time we left. We switched on the radio and listened to the summing up of the Manchester derby in the League Cup semi-final. City had been spanking a mediocre United 3-0 at half time, but the hosts pulled a goal back from Marcus Rashford in the second half. There was the usual hyperbole from fans on the radio, but at least it was from the more level-headed Radio 5 as opposed to TalkSPORT. There were some lane closures on the M1 on the way home, which meant about 20 minutes delay as drivers left it until the last minute to move over, resulting in complete standstill. I dropped Anwar off at 11.40, getting home myself at midnight. Unusually, I went straight to bed, but it took ages for me to get to sleep. With me up at 4 in the morning for work, I needed a sleep the following afternoon to catch up. 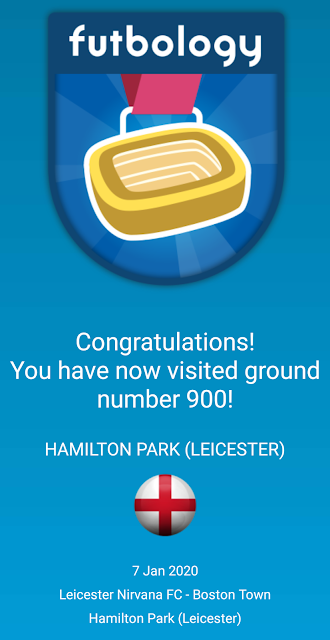 Hamilton Park is a smart and well-kept venue. It's a fairly standard modern ground and of course, there's the obligatory 50 seater metal stand. There's also a covered area of flat standing, a scaffold type structure. The rest of the ground is open. There was no bar or club shop at the ground, but there is a very good tea bar and a warm club room. The ground is located in a residential area, so there's not a lot of food or drink options nearby. 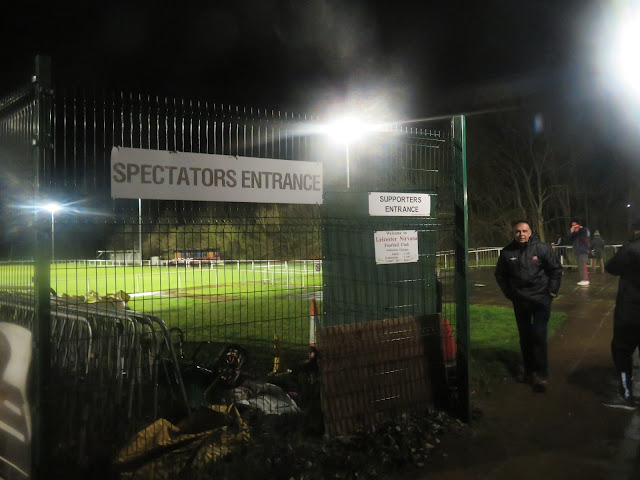 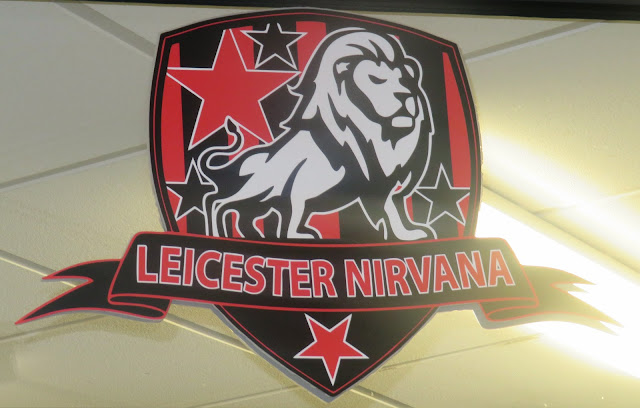 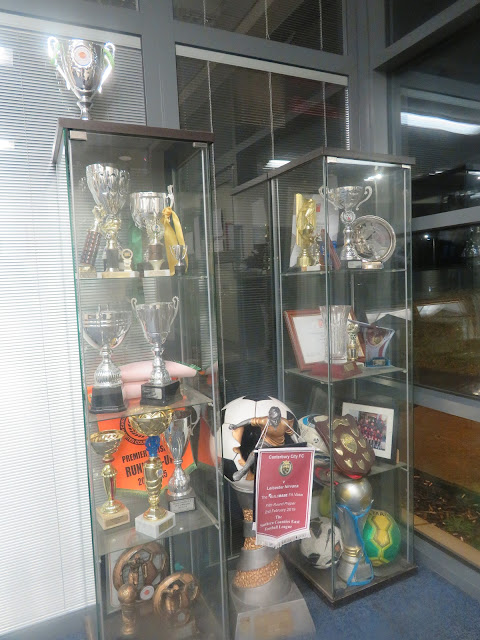 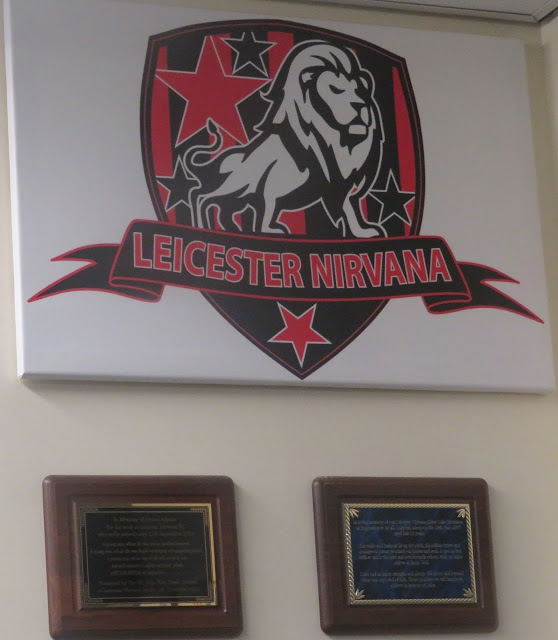 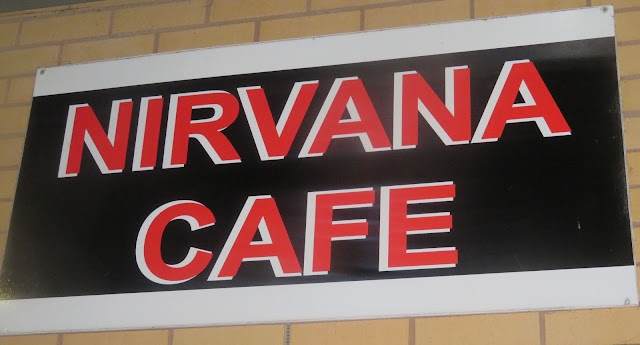 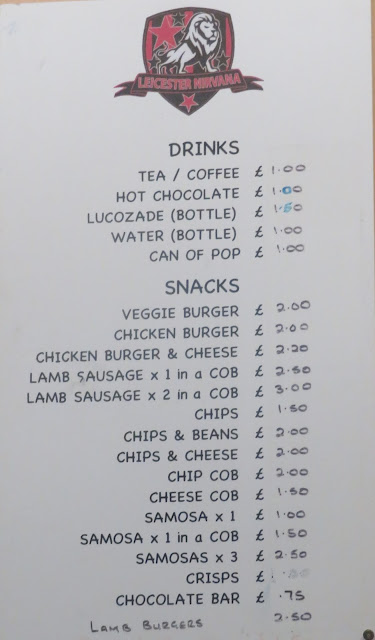 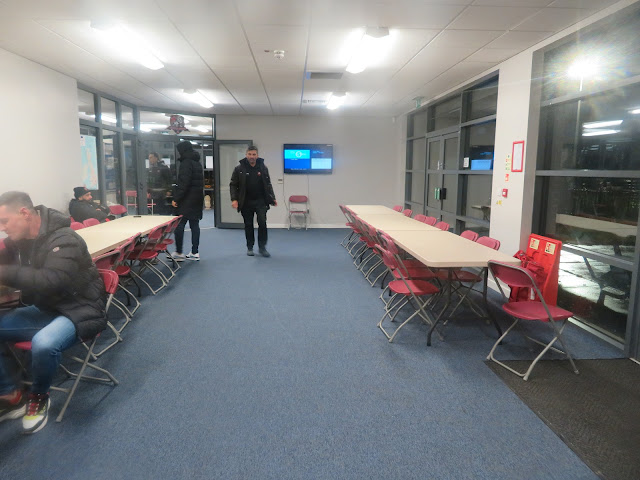 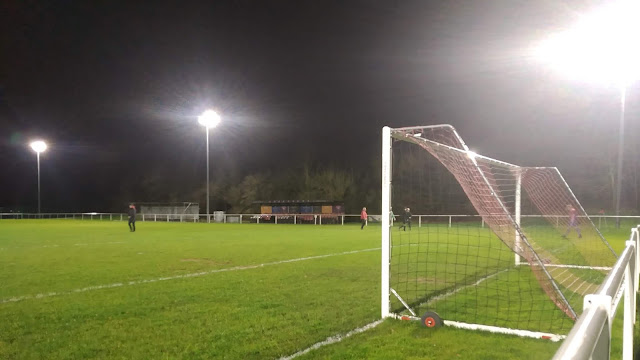 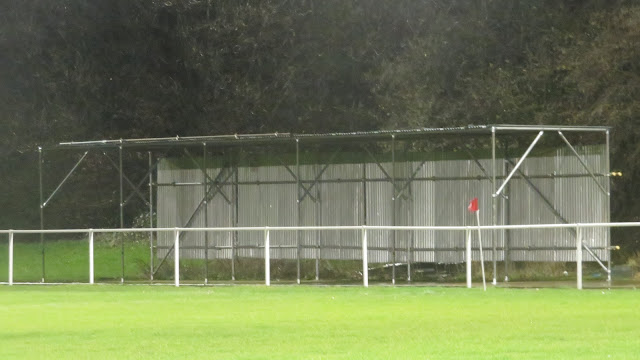 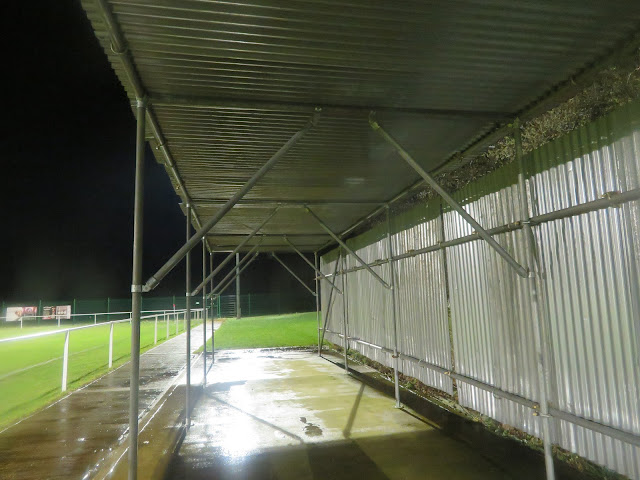 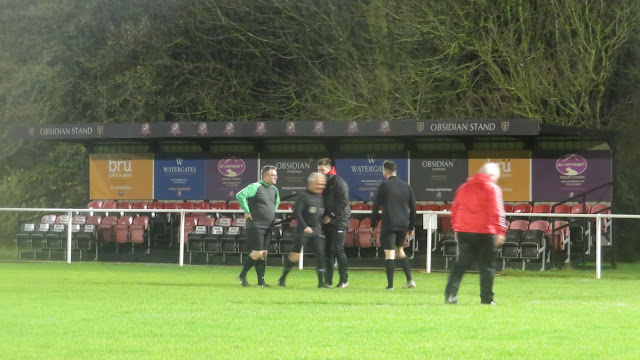 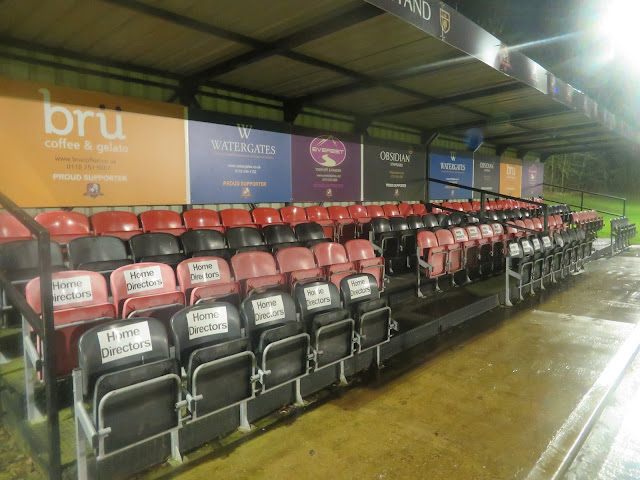 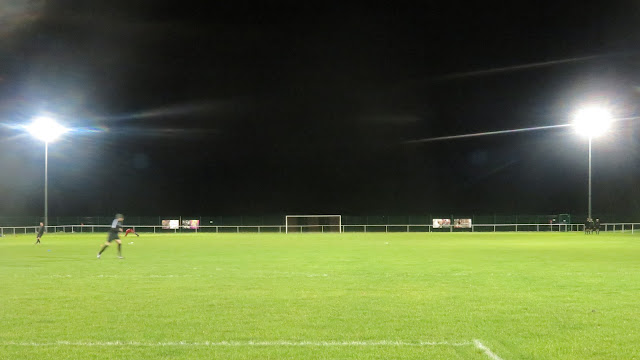 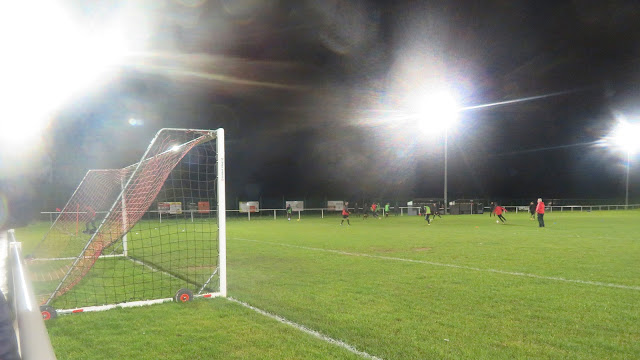 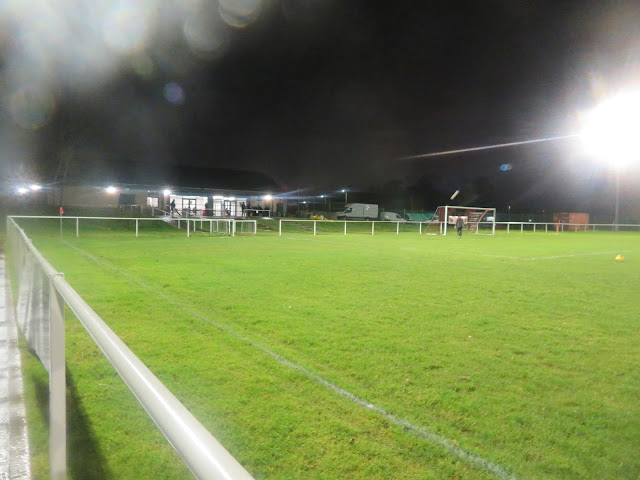 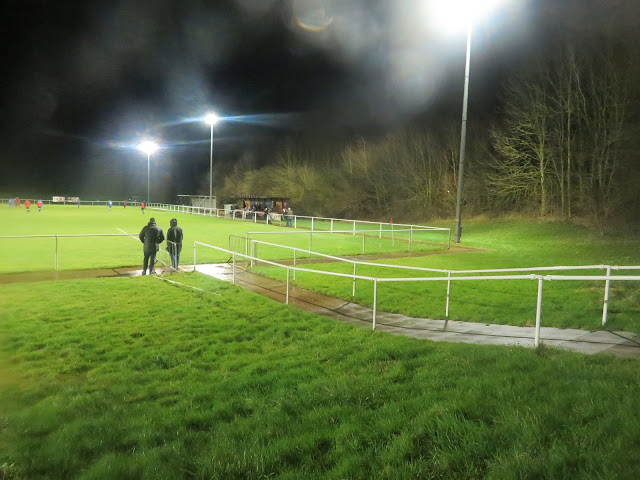 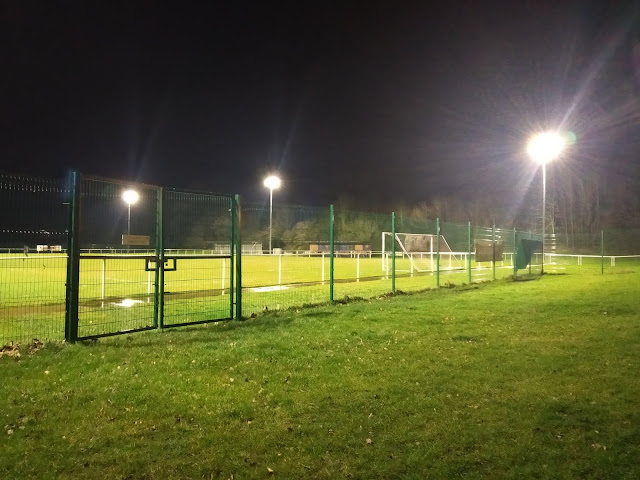