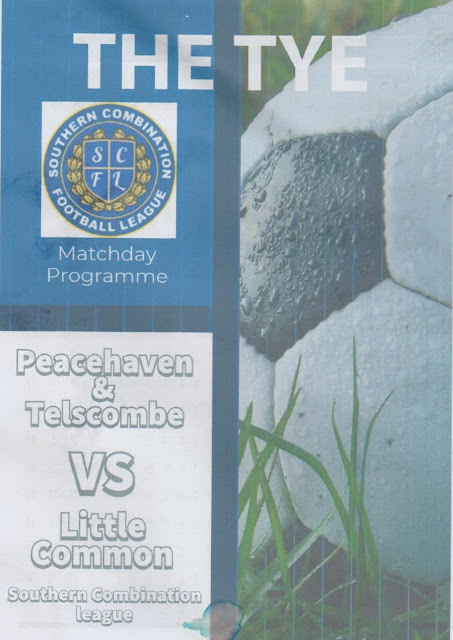 The club was formed in 1923 following the merger of two local clubs - Peacehaven Rangers and Telscombe Tye. Their formative years were spent playing in the Brighton & Hove District League and played there for 46 years, gradually progressing through the divisions. After winning its Senior Division, they joined the Sussex County League for the 1969/70 season. Starting in its second tier, they adapted to the higher level well and after a series of impressive finishes, winning promotion as runners-up behind Selsey in 1976. Now in Division 1, again they flourished and were Sussex League champions seven times in the next 20 years. Despite this, they were they were relegated in 1998 and here followed a turbulent period for the club with them dropping as low as Division 3 in 2006. The recovery was swift, however. They were champions in their only season there and by 2009 they had won Division 2. Back in Division 1, finishes were impressive with an eight Sussex League title won in 2013. Promotion to the Isthmian League followed and after winning the Division 1 South, Peacehaven & Telscombe were promoted to the Isthmian Premier for the 2014/15 season.  Despite giving the season a good shot, they were relegated, finishing 4 points adrift of safety. The poor form continued with a second successive relegation, this time back to step 5, to the newly-branded Southern Combination. Since returning, they've been taken over by the fans and had finishes of 14th, 7th and 10th. This season they were having a great time, sitting in 2nd at the time of the game. 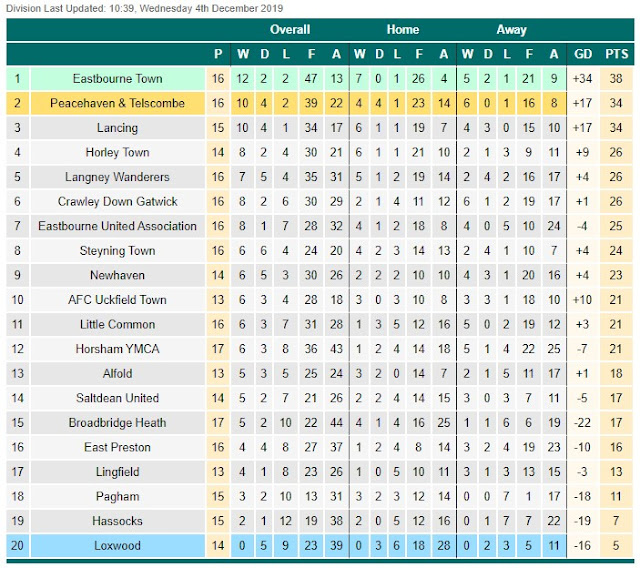 In the FA Cup, the clubs best run came during the 1990/91 season. That year they beat Selsey, Southwick, Bognor Regis Town & Margate before a narrow 3-2 defeat at Tiverton in the 4th  Qualifying Round. Little progress was made in the FA Trophy during the club's three seasons in the competition but they did reach the Quarter Final of the 1996 FA Vase, losing 1-0 at Clitheroe. Local cup wins include the Sussex Royal Ulster Rifles Cup on seven occasions, the Sussex County League Cup four times, the Sussex League Division 2 Cup four times, the Sussex Floodlit Cup twice and the Sussex Senior Cup in 2014. The town of Peacehaven has a population of just over 14,000 and famous former residents include the wife of Telly Savalas who played Kojak, the TV detective as well as singers Vera Lynn and Grace Fields. The Rushey Hill caravan park in Peacehaven bore the brunt of the October 1987 'Great Storm' with all but one of the 200 static homes completely destroyed. It featured in the BBC TV documentary 999. The parish of Telscombe is nearby and has a population of around 7,500.

I always like a bit of Friday night football, but had been unable to find any for some time. I only spotted this game when I checked the Non-League Paper on Monday and despite me being unable to persuade anyone to come with me, I decided that I'd go. I originally meant to visit back in August 2018 as part of a Bank Holiday double but opponents Eastbourne United couldn't raise a team. I tweeted out the fact that I was going, the night before the game and the club messaged me saying I could have free entry after my last game was cancelled. This was much appreciated as it wasn't even their fault. Also, with me being on my own and having to bear petrol and car costs of over £30 (estimate based on last season) it helped that little bit with my budget. Although I don't struggle to pay for my football, I do like to try and keep the costs sensible. It was my usual early start for me of 4 am and a hard day at work, with me not out until 2 pm. It was then a slow journey home with me getting home at 2.30 and not much time to have lunch and do a number of things that needed doing before I could leave. In the end, I got away at 4.40 and was hoping for a reasonable journey, traffic-wise. It wasn't a great journey down, kicking off with a road closure and diversion, expected delays on the M25 and then the last part through a myriad of daft traffic calming systems. After a stop at a cash machine, I got to the ground ten minutes before kick-off, going in and getting a nice portion of chips for £1.50 just in time for kick-off and also had a second at half time. A couple of dogs were in attendance - a huge Dalmatian and a tiny French Bulldog, but even so, they were best friends and loved people too. 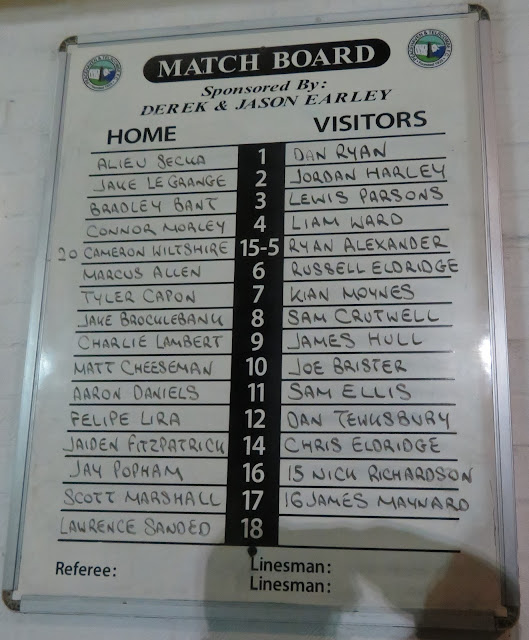 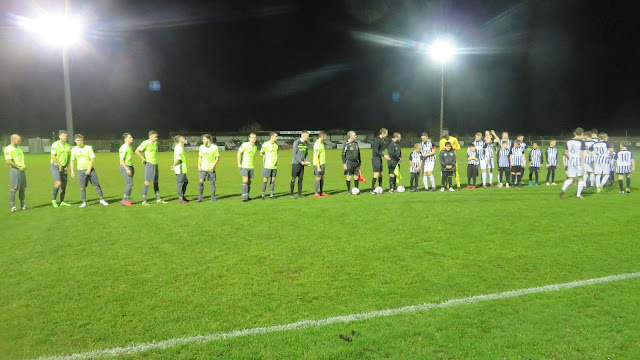 Hosts Peacehaven & Telscombe were doing well, sitting 2nd in the league. They were on a brilliant run of form, winning 8 games in a row, the last defeat coming at Broadbridge Heath on 19th October. Little Common were marooned in mid-table, sitting 11th. They were on a run of mixed form, with three wins, a draw and three defeats in their last seven games. Last time out they drew 0-0 in a stalemate against Steyning Town. The game started in mild conditions given the recent cold snap and it was the in-form hosts that started well on top and they hit the bar on 12 minutes. Little Common were restricted to chances on the break but a shot from an acute angle clipped the right-hand post on 17 minutes. Peacehaven and Telscombe deservedly took the lead just before the half-hour mark when a cross from the left was bundled home by Conor Morley. Six minutes later, it was 2-0. I didn't see the goal very well as I was walking around the ground but it was a free-kick from Jake Brocklebank. The hosts continued to dominate, but Little Common were still having chances on the break. On 51 minutes home keeper Aleiu Secka had to be alert to pluck a shot out of the top corner. Peacehaven came close to getting a third on the hour mark, a shot whistling just wide of the top left-hand corner. They were at it again on 84 minutes, Aaron Daniels getting though on goal but a saving tackle by Little Common's Russell Eldridge denied him a goalscoring chance. In injury time, the visitors got a free-kick and tried an audacious 60-yard lob but the shot was well over. They did get a goal back in the dying embers when Ryan Alexander headed home a good corner at the back post. It had been a good evening and I had a much better journey home. I left just before 9.50 and arrived home at 11.20, pretty much halving my journey time. I stayed up for a couple of hours typing my blog and catching up on YouTube videos before going to bed. 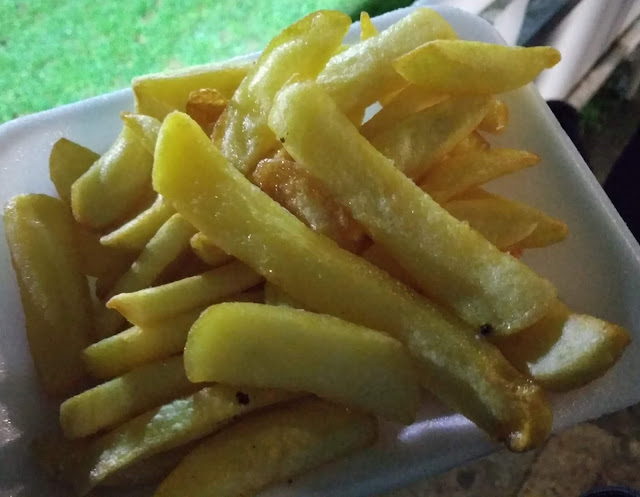 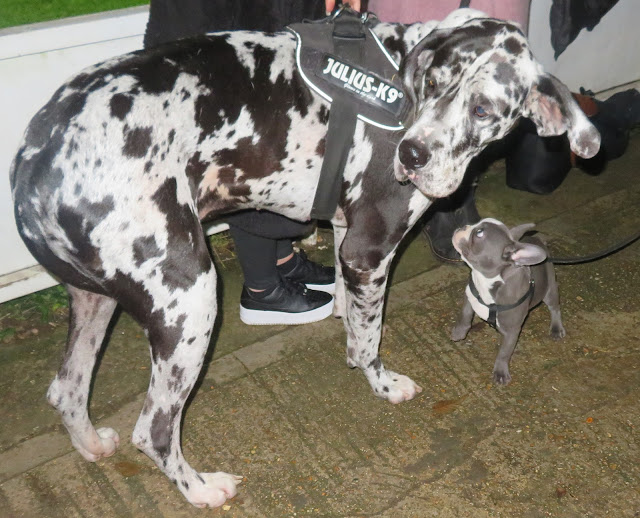 THE SPORTS PARK is a decent setup for step 5 having seen service a couple of levels higher. Sadly both of the main stands are Arena stands off the back of a lorry - a 150 seater main stand and a small 50 capacity terrace. The ground still has a bit of character though, the original covered side has a capacity of around 200 and includes a wooden terrace.  This houses all the facilities, a bar with TV, but a basic drinks choice as well as a basic club shop. The tea bar is very good, burgers, hot dogs and bacon rolls are available. The chips are excellent at £1.50 a portion. There's plenty of choice within walking distance, no pubs of note but plenty of takeaways. I didn't try it, but Burger and Bird looked well worth a visit. 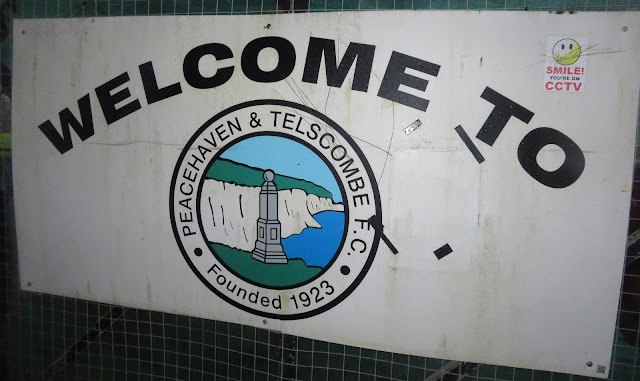 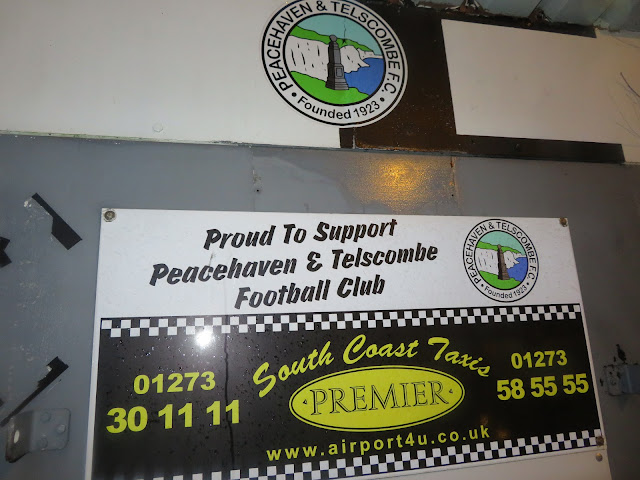 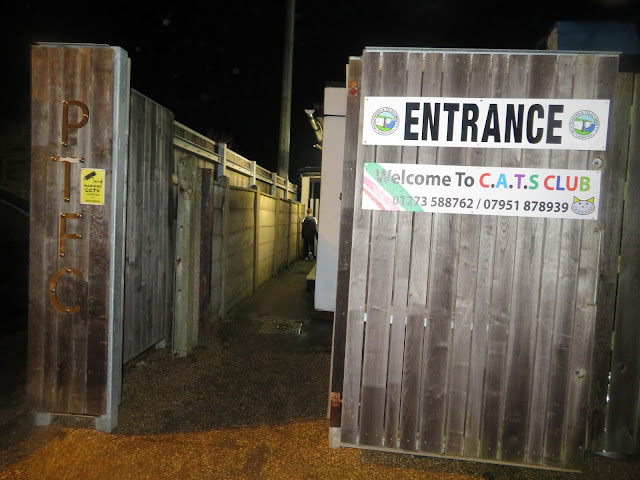 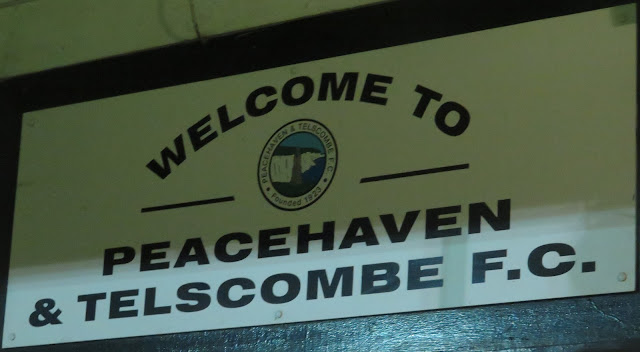 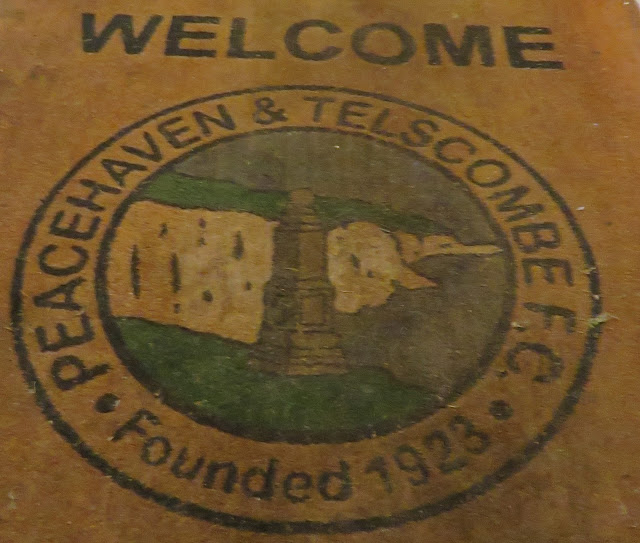 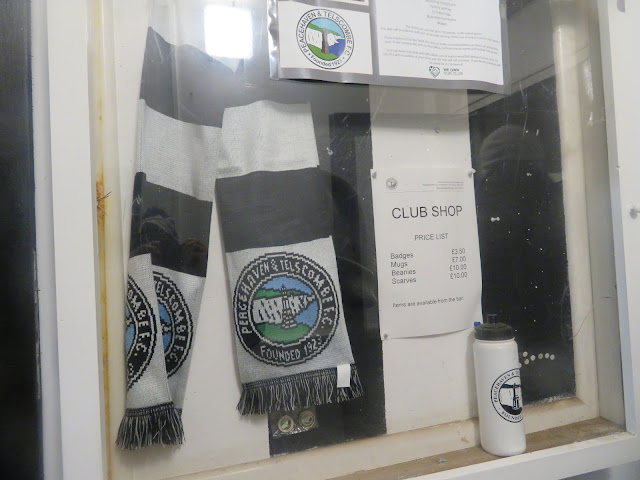 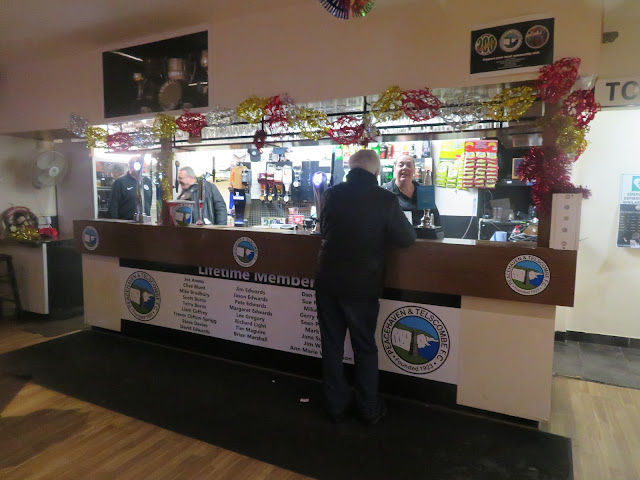 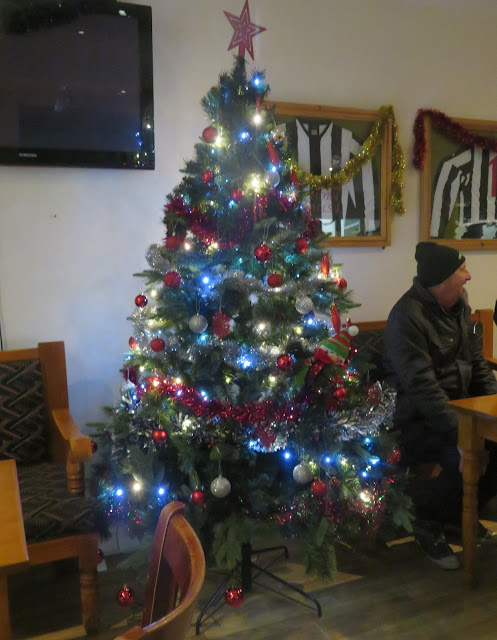 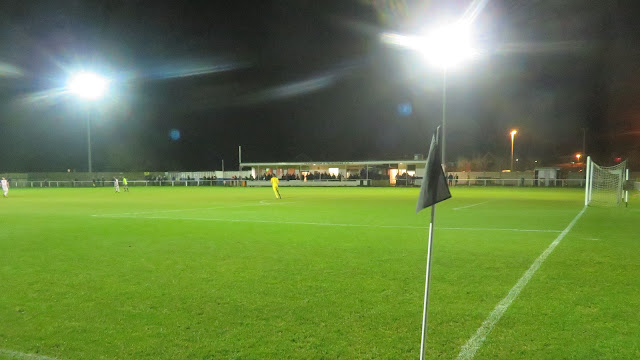 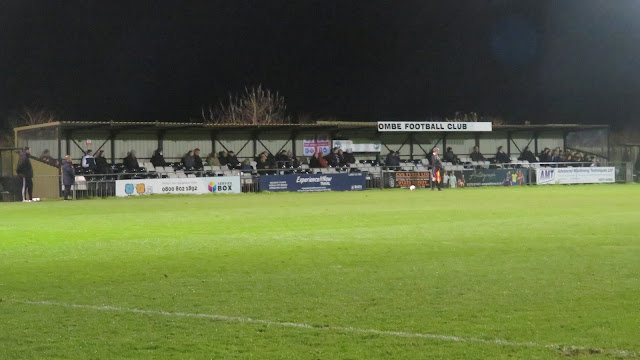 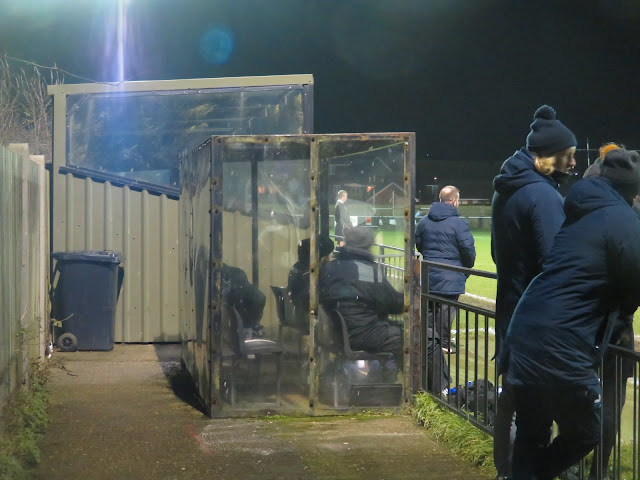 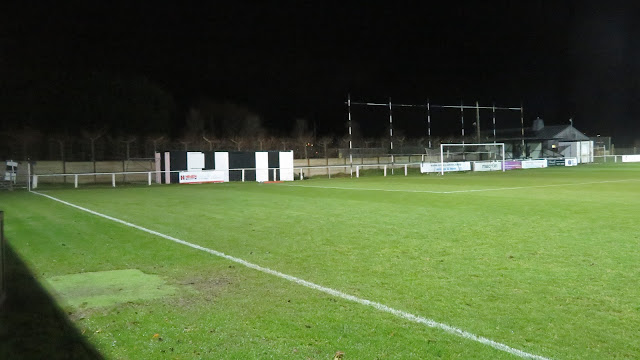 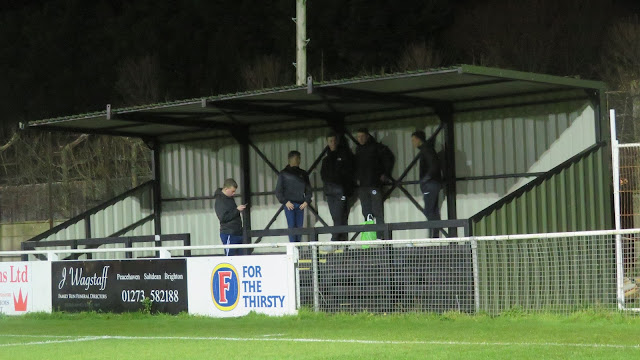 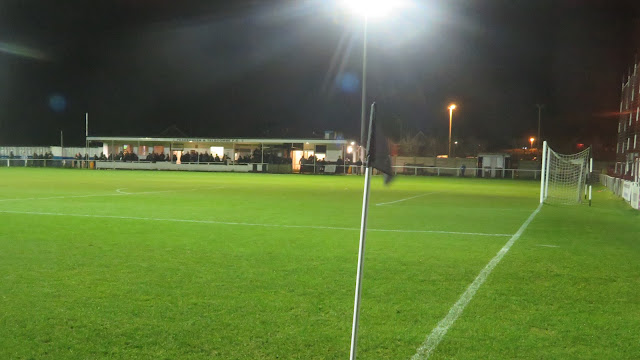 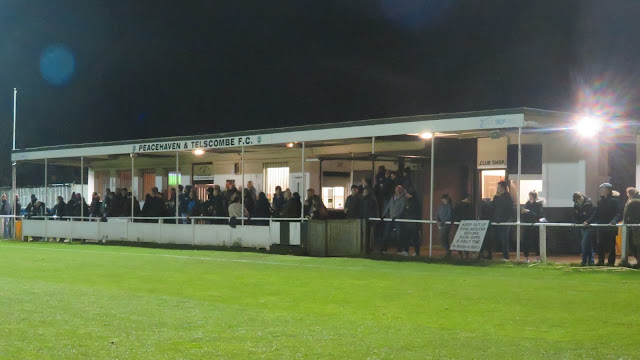 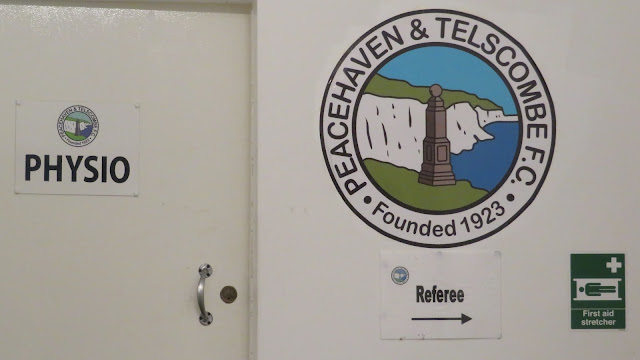 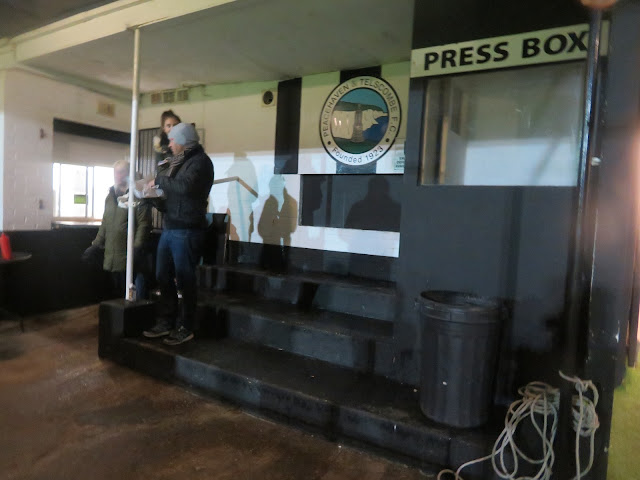 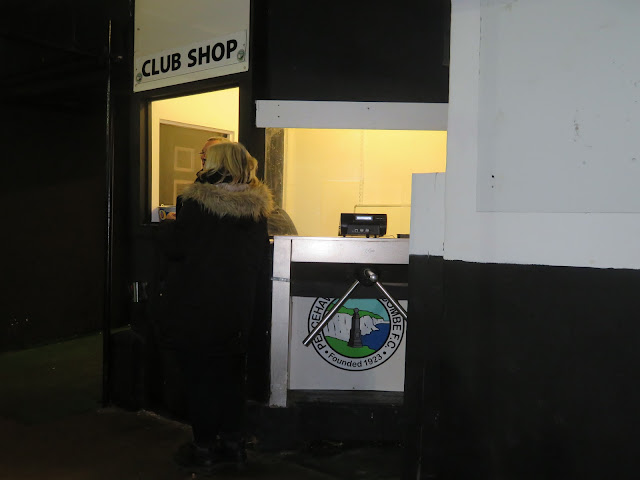 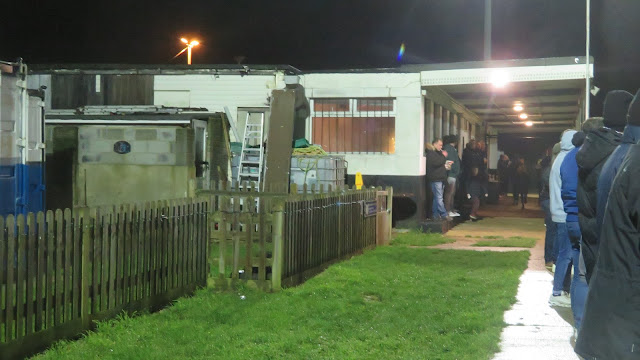 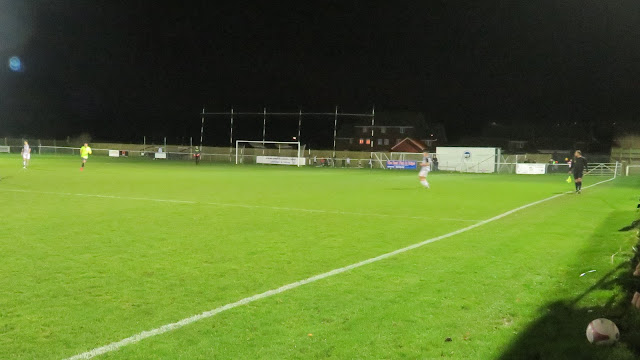 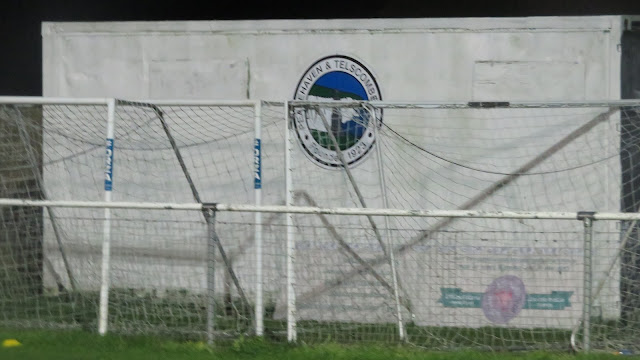