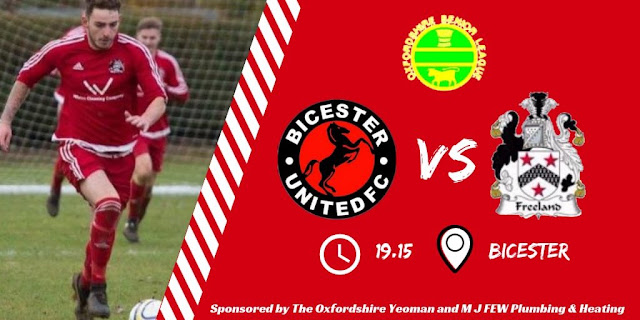 
A BRIEF HISTORY OF FOOTBALL IN BICESTER

Bicester Town was the original and biggest club in the town, having been formed in 1873 as a merger of Bicester Rovers and Bicester Harriers. They started out in local football, mainly the Oxfordshire Senior League before becoming founder members of the Hellenic League in 1953. They'd remain here for the entirety of their history, the record league finishes coming in 1961 and 1980 when they were Premier Division champions. In the FA Cup, the 1st Qualifying Round was reached a number of times whilst the FA Vase 4th Round was reached in 1979 with Cheshunt knocking them out 2-0. Local cup wins include the Oxfordshire Senior Cup in 1930 and 1939. The club had a record attendance of 955 for a 1994 friendly against Portsmouth. Their most well-known player was Kevin Brock, a former Oxford United, Newcastle United, QPR and Cardiff City midfielder played for them during the 1998/99 season. The club folded in 2011, a dispute with their landlords Bicester Sports Association. They were briefly resurrected between 2015 and 2018, playing out of Ardley United, but with hopes of a return to the town ever slimmer and a lack of interest from players saw them fold for good in 2018, just months after lifting the Hellenic D1 West title, but unable to take the promotion.

Bicester United FC was formed in time for the 2015/16 season when they were playing in Division 3 of the Banbury & District Lord Jersey League. They'd go on to win the league title that season, earning them promotion to Divison 2.  The 2016/17 season saw them promoted to Divison 2 where they finished as runners-up to Byfield Athletic. With the team now playing at the former home of Bicester Town, they made the step up to Division 1 of the Oxfordshire Senior League. It was a move that bought about immediate dividends with the team becoming champions in their debut season. Promotion to the Premier Division followed and last season saw Bicester United finish 9th. This season has seen a promising start, albeit with only three games played with the team sitting 2nd at the time of my visit.

The town of Bicester has a population of 32,842 and is located near to junction 9 of the M40 motorway. It's most famous landmark is the Bicester Village outlet which attracts a number of shoppers to the town. The sports ground has a limited shelf life, an agreement was reached in 2016 to sell the land to developers planning to turn it into a retail and leisure space and in return provide the Banbury Sports association with a new facility at nearby Chesterton. Famous people from the town include the racing driver Jenson Button. 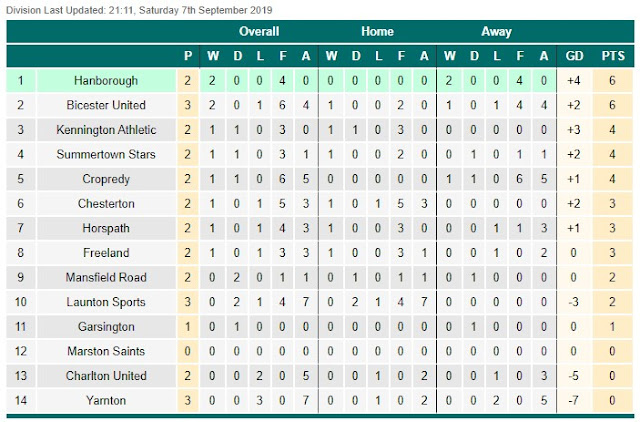 I wasn't originally intending to go to a game until Friday as I'd spent the Tuesday night at home watching the England v Kosovo game with a few cans of cider. It was a great game, the best in years and ended in a 5-3 win for England with the Kosovans giving it a real go. As such, I envisaged a night in, watching TV and catching up on sleep. But when I finished work around lunchtime, I found a message from fellow hopper Anwar, asking if I fancied going to Bicester United v Freeland that night. With the future of the ground uncertain, I was well up for it, especially with a 7.15 kick-off and it being fairly local. I spent the afternoon researching the history of football in Bicester, which took a bit longer than expected but was quite interesting. I also watched some YouTube videos, before having dinner and leaving around 5.50. It was a surprisingly good journey over to Aylesbury for the rush hour, with me meeting Anwar and his son Hicham at 6.20. Again, it was a decent journey over to Bicester with us getting to the ground at 6.55. Fellow groundhopper John Main was also in attendance and I spent the 20 minutes before kick-off catching up online. 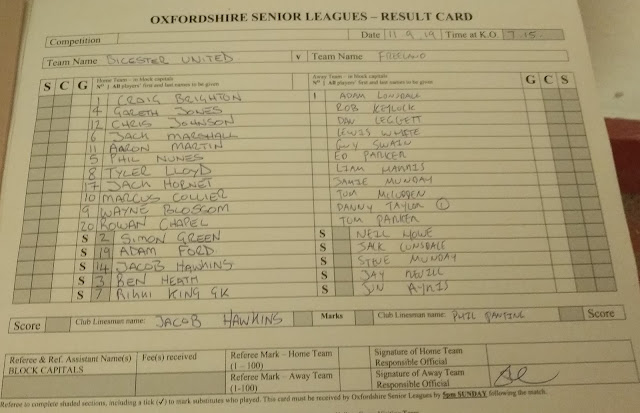 Strangely, Bicester were donning their blue change kit, despite being the home side. They'd started the season well with a 4-1 win at Launton Sports and a 2-0 win against Yarnton. However, they'd suffered a setback on Saturday, losing 3-0 at Horspath. Freeland, in red, had started their season a couple of weeks later and had beaten Horspath 3-1 but lost at Summertown on Saturday. It was the visitors who started on the front foot and they were a goal ahead within a couple of minutes. The ball was fed to Danny Taylor who rounded the keeper and slotted into the empty net from 15 yards. Freeland were much the better side for the majority of the first half, but Bicester United came into it later on, Jack Hornet coming close, shooting just wide of the right-hand post. There weren't a huge amount of chances though and the visitors doubled their lead on 52 minutes, a great defence-splitting pass found Tom McCudden who tucked the ball away. The hosts had a goal disallowed for offside a few minutes later and from then on, any chance of a comeback looked slim.  Freeland headed just wide of the right-hand post on 67 minutes, but a minute later, they made sure of their win. Tom McCudden rode a tackle well and got away to finish into the bottom right-hand corner from around the penalty spot. Freeland had further chances, most notable right at the death when a shot into the top corner was saved well by Bicester keeper Craig Brighton. The majority of the 50 or so crowd went home disappointed, with us leaving at 9. I dropped Anwar & Hicham off at 9.30, getting in just before 10. I got to bed fairly quickly, watching Corrie before going to sleep at 11.15, later than I would have liked with me up for work at 4am. 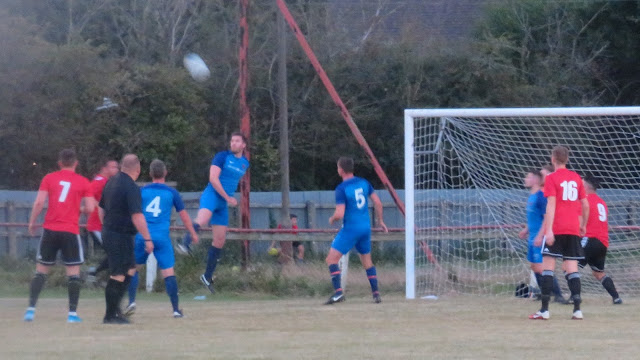 
The Bicester Sports Ground is a decent venue for step 7, but one that has seen better days. There's one covered area, this once presumably had benches but these have now gone, with only the supports still there. There's a bit of terracing at the side and if you make use of the whole stand, it probably would hold around 200. Some of the pitch surround has also fallen down and a fence that was separating the football and adjacent rugby club (when I popped in in the mid-2000s has now gone. It's still well worth a visit though, food and drinks wise there was a tea bar selling hot and cold drinks as well as snacks and there are the facilities to provide hot food too. It looked as if the bar had been converted into a community facility, but there's a pub right outside the ground and a big Tesco around 10 minutes walk away. 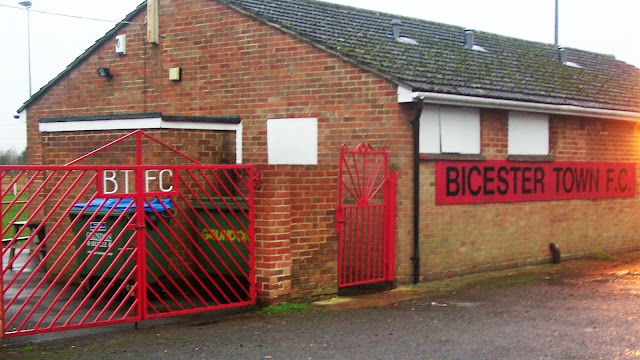 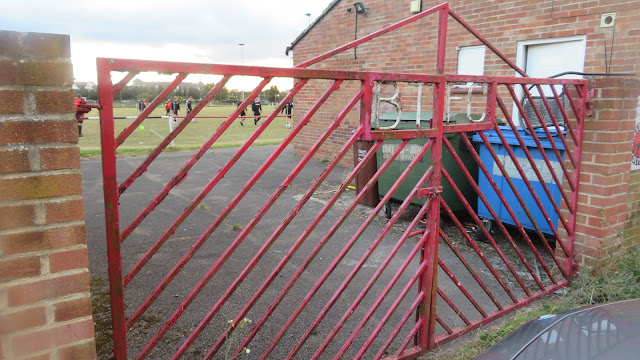 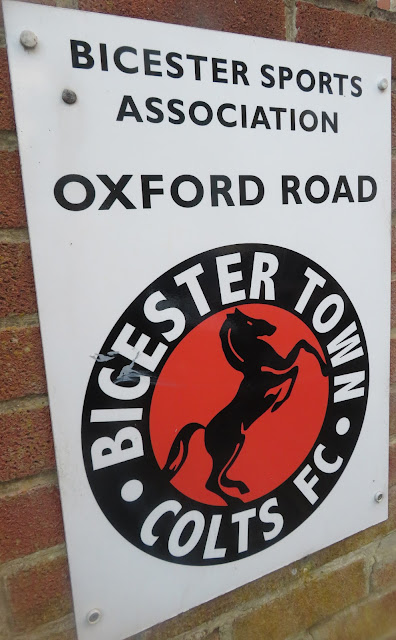 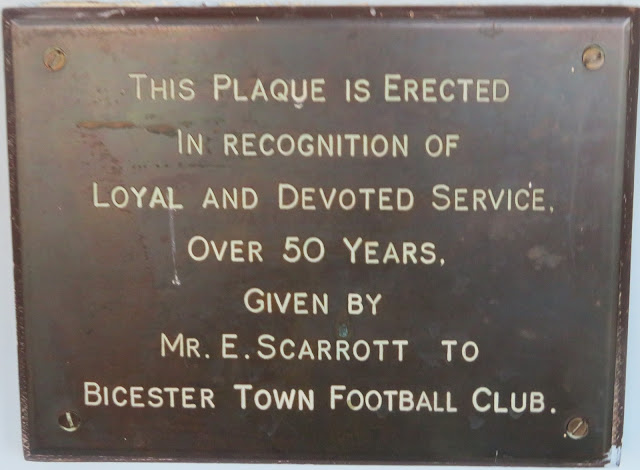 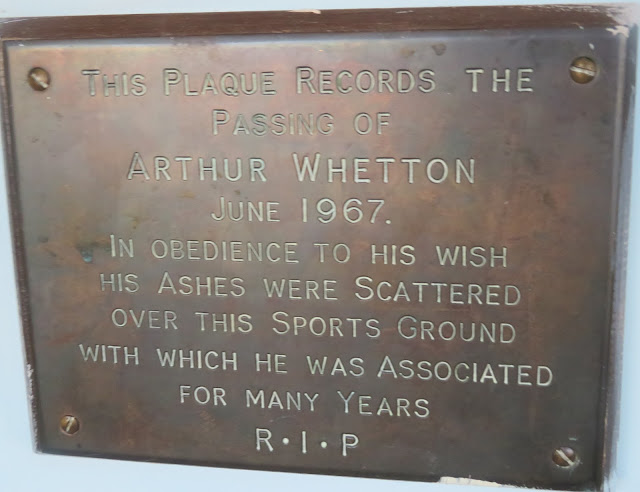 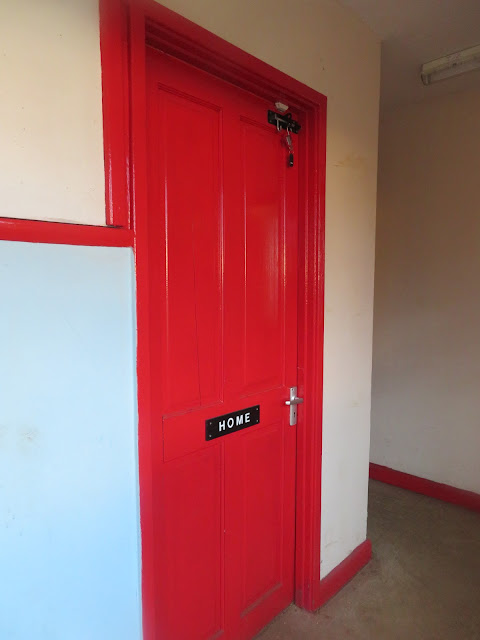 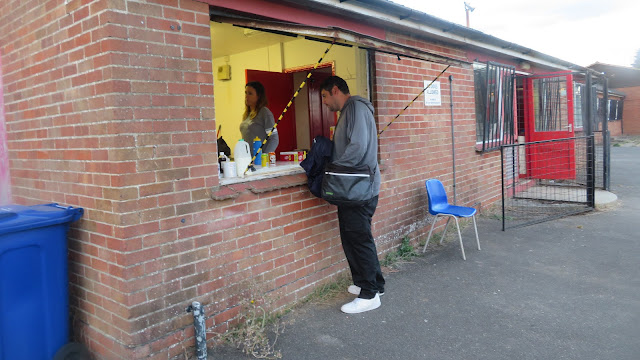 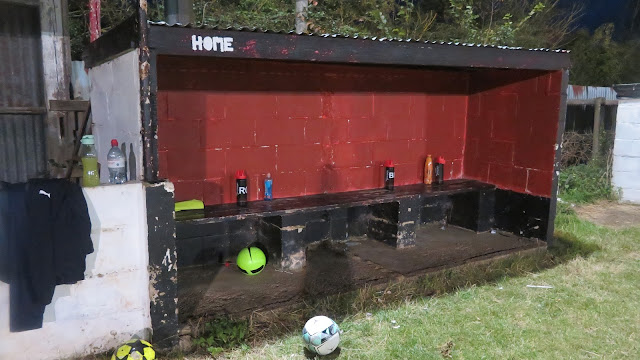 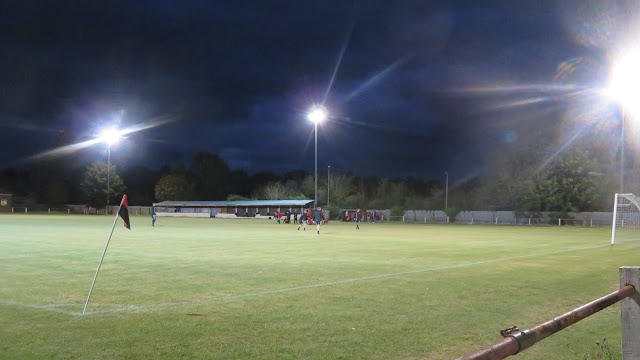 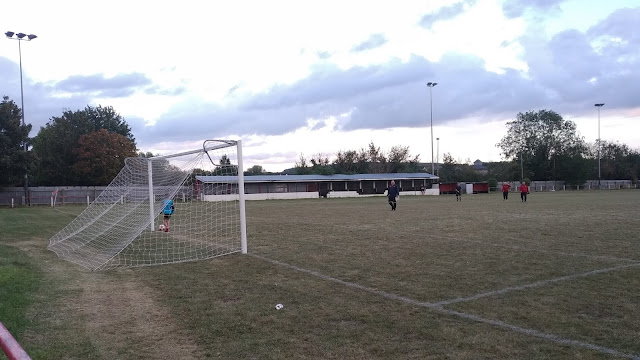 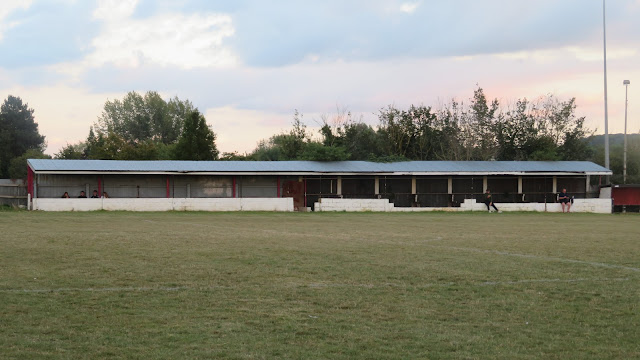 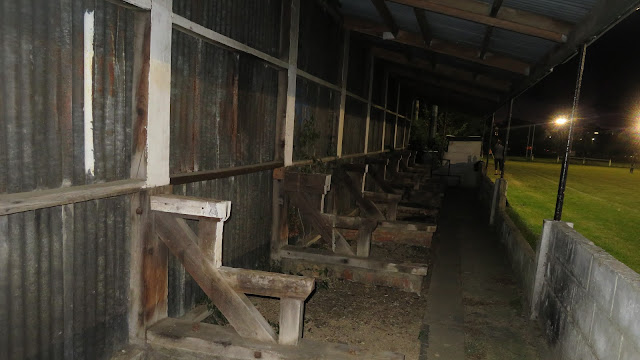 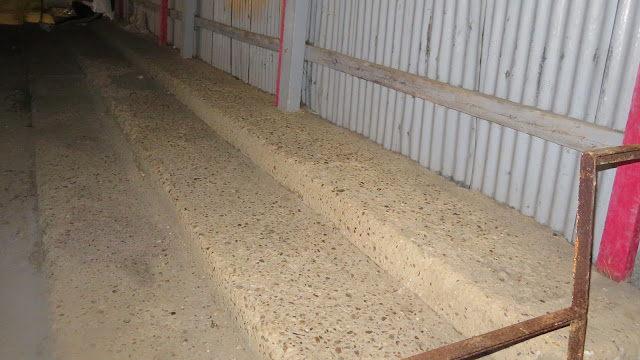 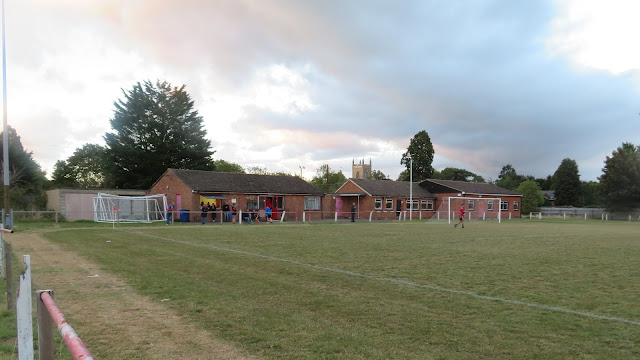 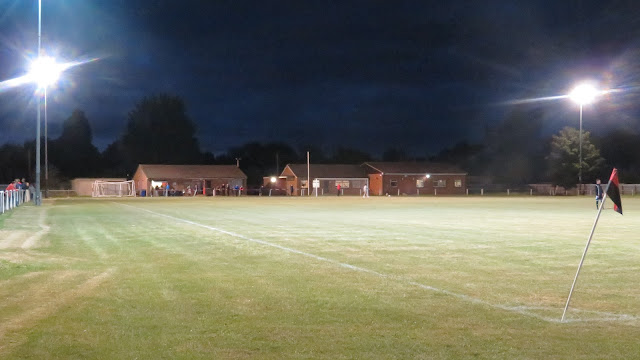 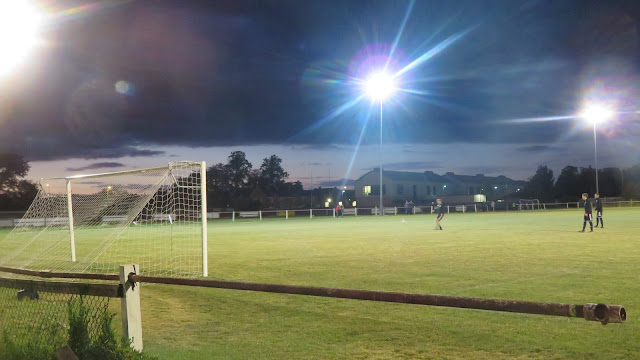 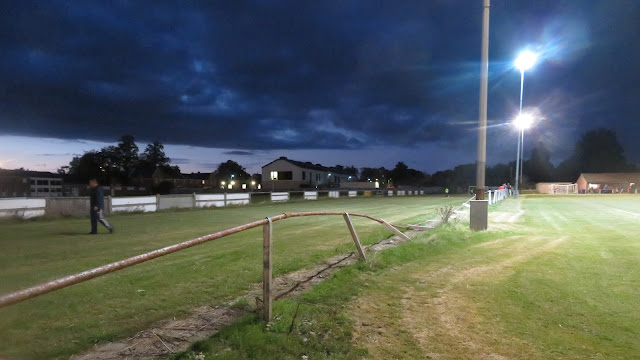 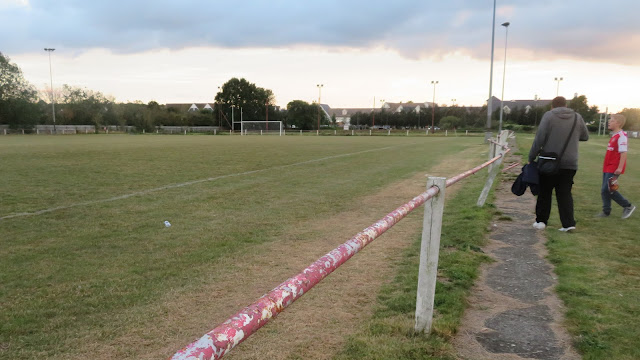