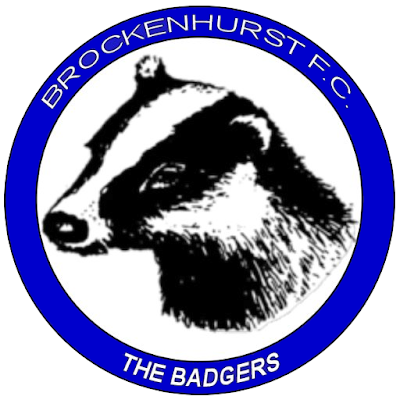 The club was established in 1898 and spent their early years in local competitions such as the New Forest (winning it serval times) and Bournemouth Leagues as the Hampshire League of which they were champions in 1971. In 1986 they became founder members of the Wessex League, managing two 6th place finishes whilst it was a single division. It expanded to two division in 2004 and despite finishing 5th in the Premier Division in 2009 (their best ever finish in the modern-day pyramid) they were relegated to Division 1 a couple of years later. They bounced back as champions within two seasons, winning Division 1 in 2013. They've been in the Premier Division ever since, after a series of mid-table finishes, they sit 15th in the table prior to tonight's game.

A good number of FA Cup runs have been enjoyed by Brockenhurst with the club reaching the 3rd Qualifying Round on three occasions. The most recent of these saw them defeat Fareham Town, Yate Town, Mangotsfield United and AFC Portchester prior to a 5-1 defeat at home to Conference South outfit Wealdstone.  There have also been a number of good FA Vase runs, the best progress being in their debut year of 1975 when they reached the 5th Round before losing to Stamford. Local cup wins include the Bournemouth Senior Cup in 1961 and the Hants Intermediate Cup a year later. The club holds the record for the most consecutive penalties converted in a penalty shoot out when 29 spot kicks in a row were converted in a Hampshire Senior Cup tie with Andover Town. Andover missed the 30th, with Brockenhurst going on to win the shoot out. Brockenhurst itself is the largest village in the New Forest and has a population of just over 3,500. 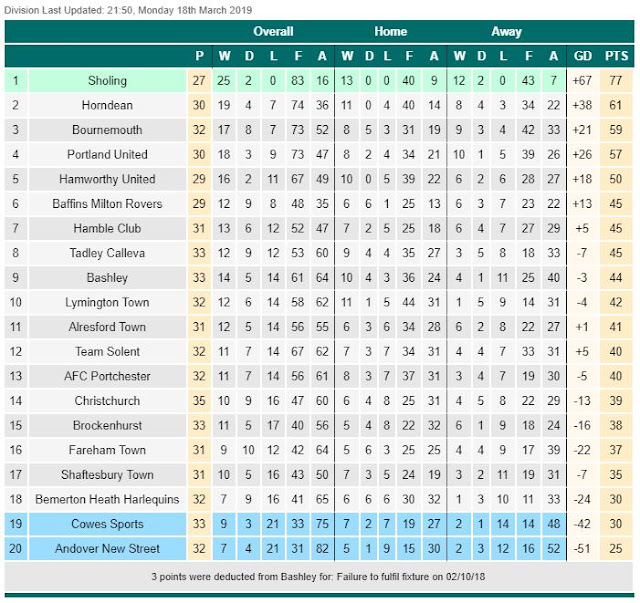 MY VISIT
It had been 5 months since my last week off from work, so I was really looking forward to a glorious 15 days off from the hard slog. There'd be plenty of football of course and I'd was delighted when Milton Keynes based hopper Chris was available for a rare Tuesday game. With my other hopping pal, Anwar not being that keen in recent weeks, it was most welcome. With me not having work in the morning, the distance was not a problem. I drew up a shortlist of around 10 with both myself & Chris concluding that Droylsden would be our best bet. It was a ground that I'd wanted to visit for a while and one that I was unlikely to do with Anwar due to his limited funds and other commitments. A groundhop would be a welcome break from watching Wycombe who had been a right misery to watch lately, making basic errors which had resulted in 9 games without a win. The day of the game came and it started well enough with reasonable nights sleep. I relaxed for a few hours before walking down town. It was whilst on that walk down town that I got a text off Chris to say that his train had been cancelled and that tonight was potentially off. This was due to a poor person being hit, the same reason my trip to Lye a couple of weeks earlier had been restricted. He was unable to get back or stop en route to go to one of the limited options available and didn't fancy any of the options tomorrow night either. Not the best start to my holiday, but I tried to salvage something from the day by texting Anwar to see if he fancied Bustleholme. He didn't and despite much pleading, I couldn't persuade him to do a game as he needed to save money for the stupidly early Wycombe Wanderers season ticket deadline. It boiled down to three options for me on my own - Brockenhurst, Wimborne Town & Portland United. In the end, after much deliberation, I opted for Brockenhurst as it was the nearest and I'd already planned to go on the Chesham team coach to Wimborne. To cheer myself up, I ordered 12 bottles of cider from a craft shop called Scrattings, this would be partially sampled during the upcoming England games, one of the rare times when I watch footy on TV. 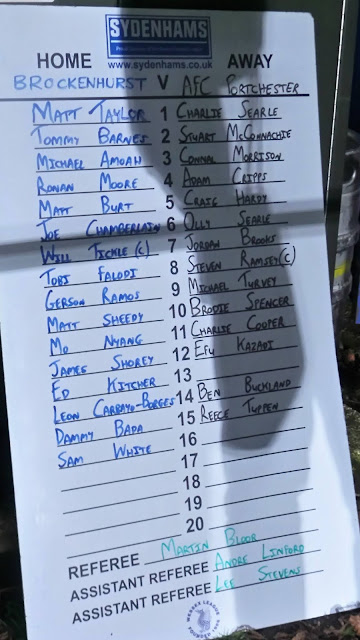 After getting my things together, I left at 4.15. Getting out of Wycombe wasn't great, what with the abundance of roadworks. But generally the journey was good, the only further delay being through Lyndhurst thanks to yet more roadworks. I got to the ground at 6.30 and although there were a few spaces, I decided to park around the corner. I needed cash so I got some crisps from Tesco and £20 cash. I then walked to a pub, the Snakecatcher. They didn’t do any ciders I hadn’t had, so I headed to a nearby chippy. They were charging £2 for a half portion of chips, so I went back to the Chinese I’d seen. Their chips were the same price, only freshly cooked and a huge portion, so they really filled me up. It was a few minutes to the ground where I paid a reasonable £6 entry. I opted against the £2 programme as they usually contain very little to read and a browse through an old copy in the bar confirmed this. I did want to put some more money the club’s way though and so had a pint of Thatchers Gold for £3.50 which was as good as you could expect it to be. 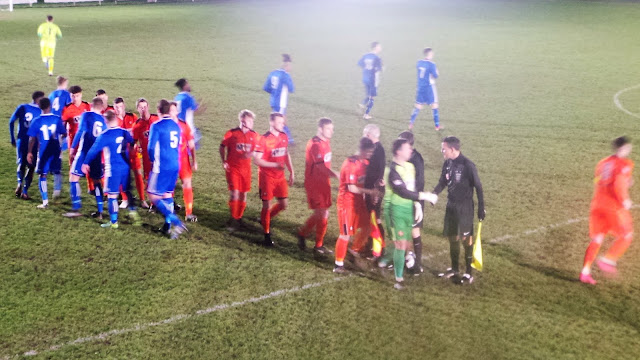 Around ten minutes before kickoff, I went outside and took a seat in the stand. This offered a good view of a lively opening period. Both sides had chances but it was visitors AFC Portchester that had the slight edge. Brockenhurst soon grew into the game and made some chances, but finishing was generally wayward. That was the story of the first half which was entertaining, but goalless at the break. The second half followed the same pattern, the play getting ever more desperate and wayward and for a long time it looked as if an increasingly physical game was gonna end 0-0. AFC Portchester had other ideas and scored on the break. A ball was played forward out of the defence, the left winger got away and provided a cross for Stuart McConachie to tap home from just inside the six-yard box. Though there had been plenty of shots, this was one of the first on target that the crowd of 86 had seen. The game finished quite late and it wasn't until 9.45 that I left. I had to stop at ASDA in Eastleigh for petrol on the way back, this took 15 minutes as there were so few pumps for so many cars. With me up to date on my podcasts and nothing decent on the radio, I listened to an audiobook of George Orwell's 1984. I had a good run but it was ironic seeing people getting flashed speeding on the M25. I was wise to the authorities dirty tricks though and still got home in decent time, getting back at 11.40. I typed my blog and sorted photos and videos before going to sleep at around 1.30 am.

GRIGG LANE is a decent venue, the main area of cover being a stand that holds around 200. It’s elevated and has good legroom, but does have a few supporting pillars. There are smaller areas of cover behind each goal, whilst the rest of the ground is open. The tea bar is quite basic, offering burgers and hotdogs from a cabinet. The bar is better, spacious and offering a decent range of drinks at reasonable prices. The ground is right by the village, offering shops, pubs and takeaways with the Chinese being decent. The ground and village are very well kept and friendly. One notable point about the ground is the large corner floodlights which light up the pitch well and make it a good midweek choice. The club car park is of a reasonable size, with plenty of alternatives nearby. 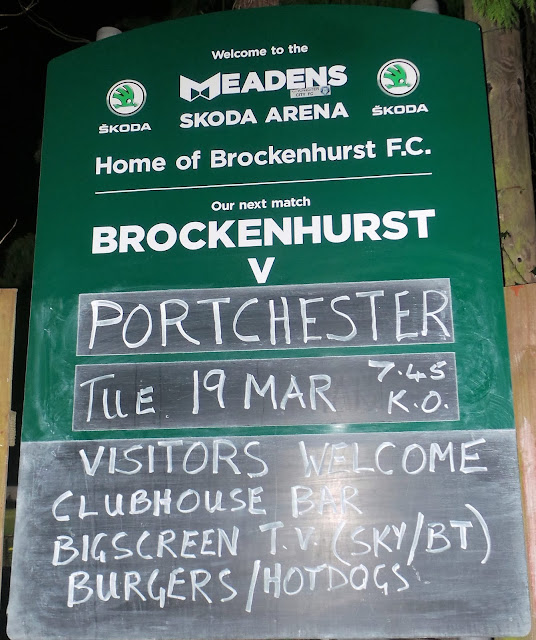 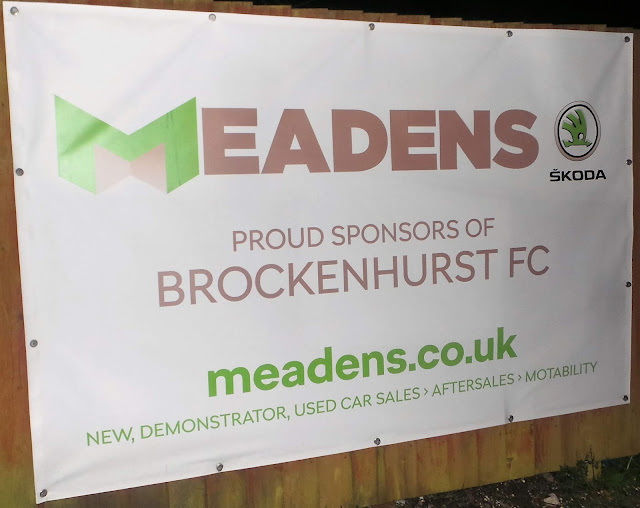 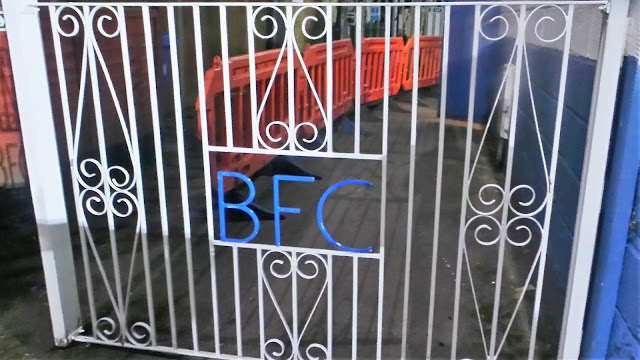 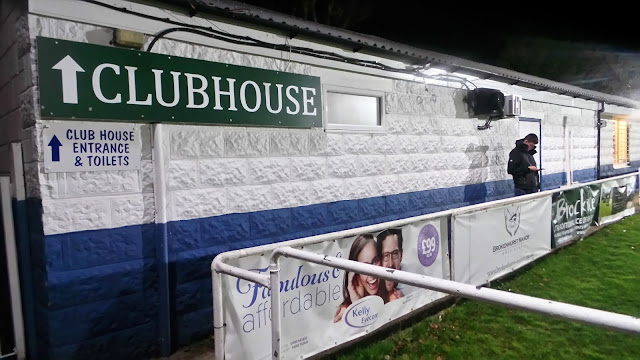 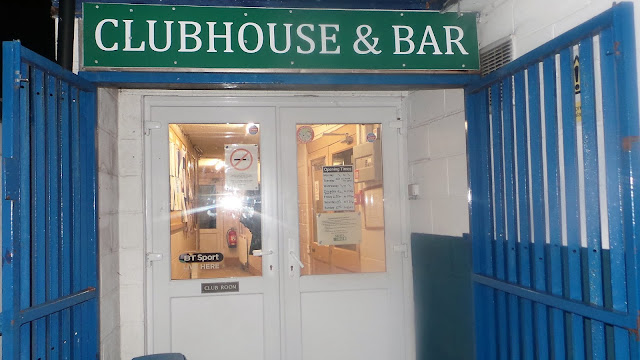 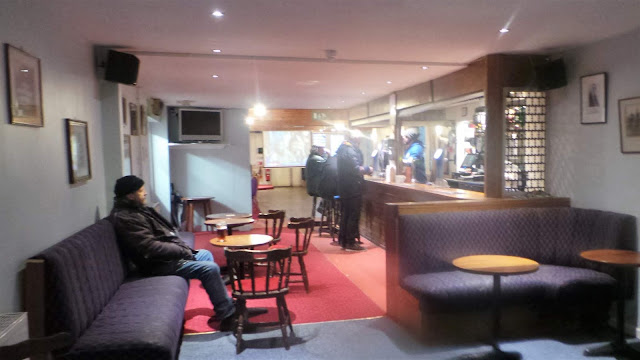 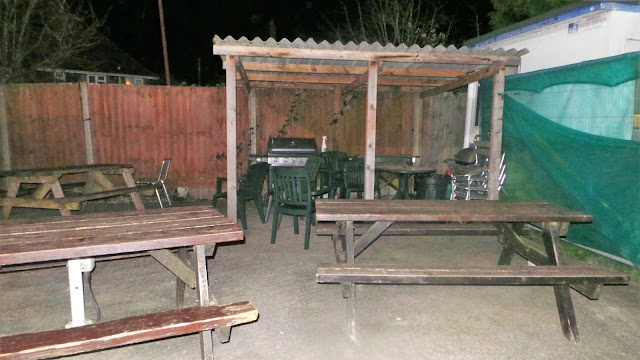 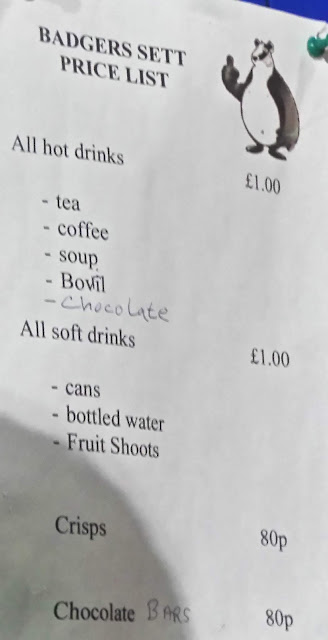 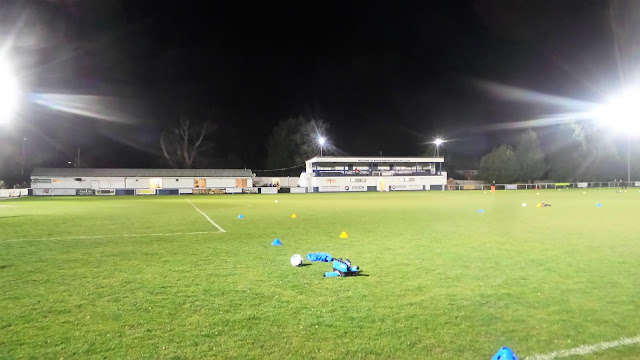 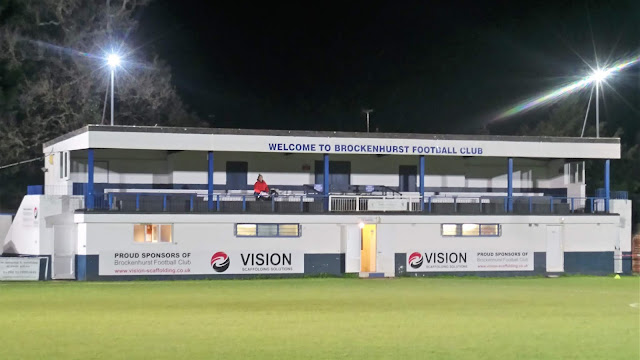 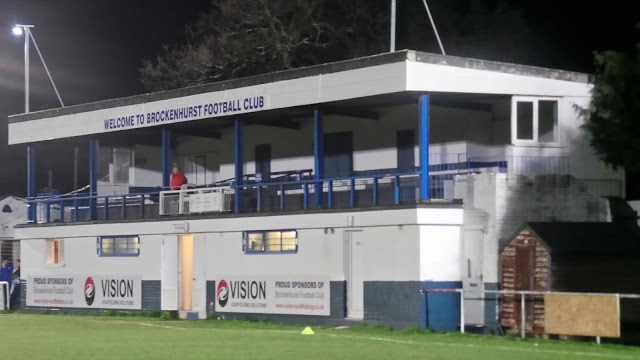 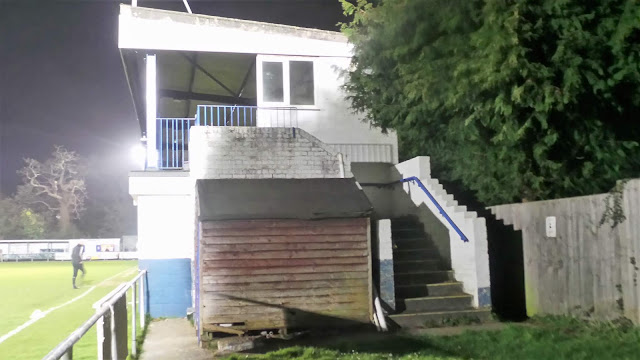 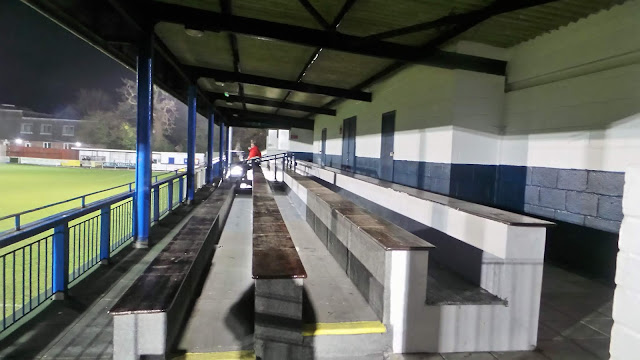 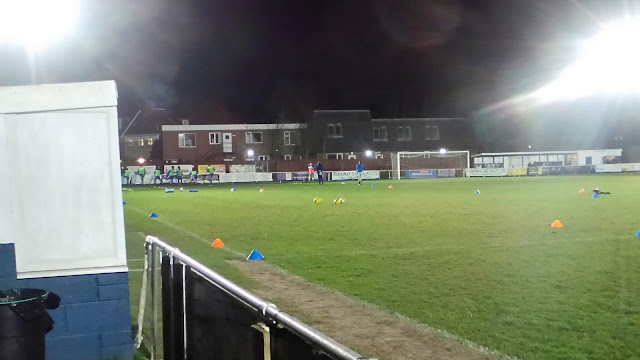 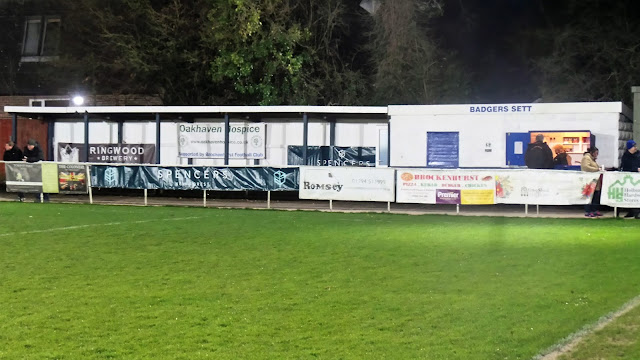 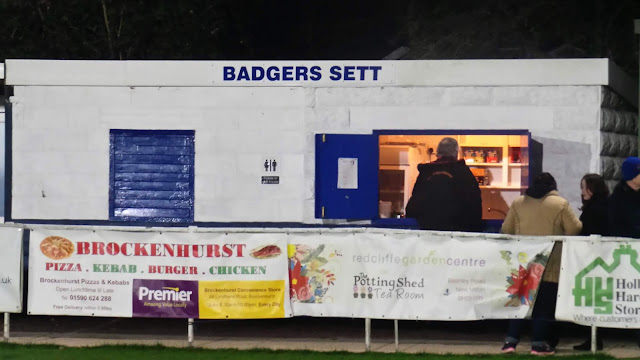 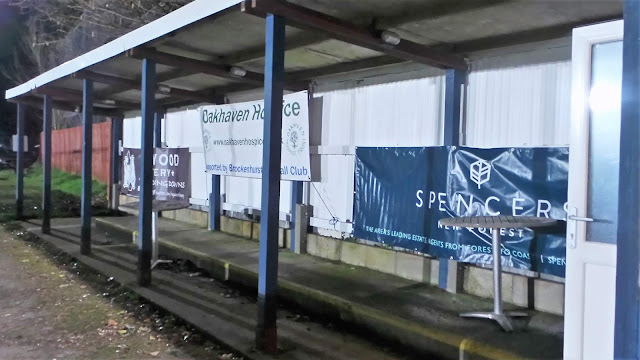 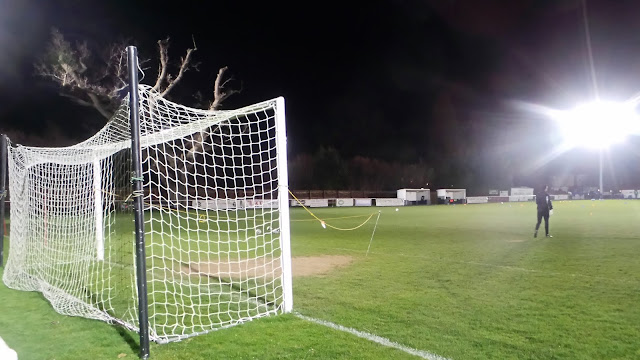 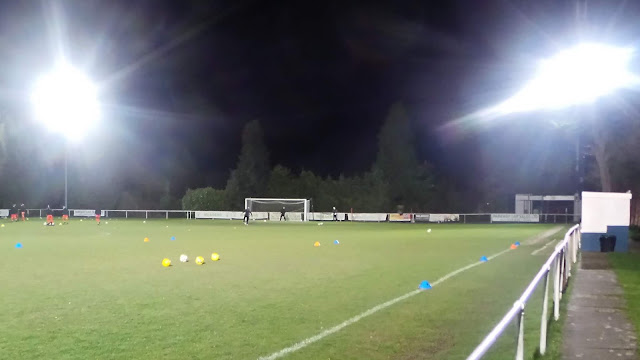