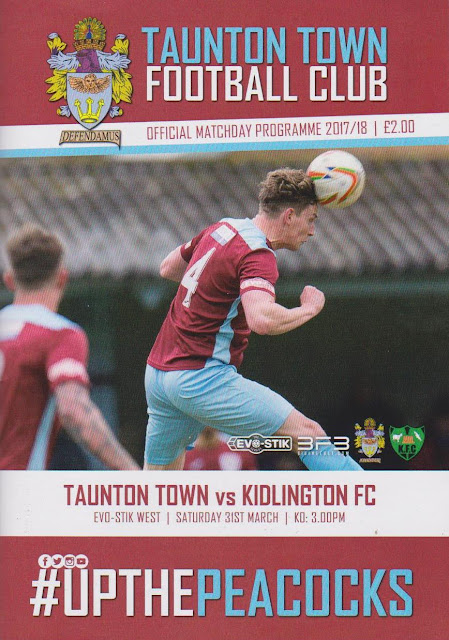 The club was formed in 1947 and were initially known as Taunton before changing their name to Taunton Town in 1968.Initially playing in the Somerset County League, they joined the Western League in 1954. Starting out in Division 2, they were runners-up to Torquay United Reserves in their second season, earning promotion to the top tier in the process. They'd remain here until 1977, becoming champions in 1969 and runners-up on a further four occasions. From 1977 until 1983, Taunton Town had a spell in the Southern League generally finishing around mid-table. They'd rejoin the Western League in 1983, winning it on a further five occasions, including three in a row around the turn of the millennium. Following a runners-up spot behind Bideford in 2002, Taunton Town elected to make the step up to the Southern League Division 1 South & West, where they remain to this day. Recent years have seen them challenging for promotion to the Southern Premier with three consecutive playoff failures. There should be no such drama this season, however, as they are runaway league leaders and are within touching distance of guaranteeing the title.

Taunton Town have reached the FA Cup 1st round twice. The most recent occasion came last season when after beating Tiverton Town, Cinderford Town, Slimbridge, Hampton & Richmond Borough and Hemel Hempstead Town, they lost to Conference Premier side Barrow after a replay. In 2003/04, they reached the FA Trophy 3rd Round, beating Corby Town, Clevedon Town & Yeading before a 3-0 defeat at Worthing. Taunton Town were FA Vase runners-up in 1994, losing 2-1 to Diss Town & Wembley. They put that right in 2001, beating Berkhamsted Town 2-1 at Villa Park. A number of local trophies have been won - the Somerset Senior Cup in 1970 as well as a plethora of Western League cups. 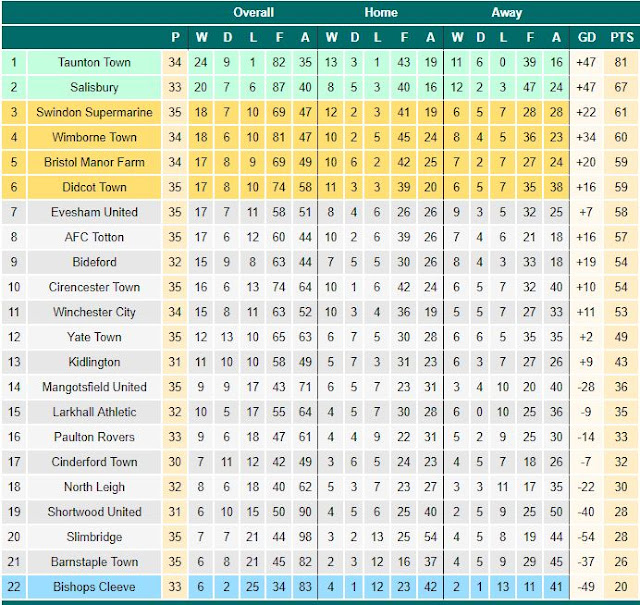 With Wycombe playing on the Good Friday, the plan was always to try and get a game in on Saturday. I’d have been going on the South West Peninsula League hop, but the fixtures only covered half of the Easter weekend, meaning that I’d have to drive down to Cornwall and back in a day, something that I didn’t fancy. I started to look for options nearer to home, or as I had done in the past, see if any local teams were playing at faraway grounds that I’d not been to. The first one I checked, Kidlington, were playing at Taunton. Even better, they were offering free travel. So without hesitation, I booked on the coach. I did the essential pre-match checks, which basically meant scouting the What Pub website to see what there was in the real cider stakes. Being the Westcountry, it was a happy hunting ground for that sort of thing. There was three pubs of interest - two Wetherspoons and another place called the Plough Inn, which had up to eight Somerset ciders. I also researched the history of Taunton Town and discovered that they could earn promotion today, should results go there way. 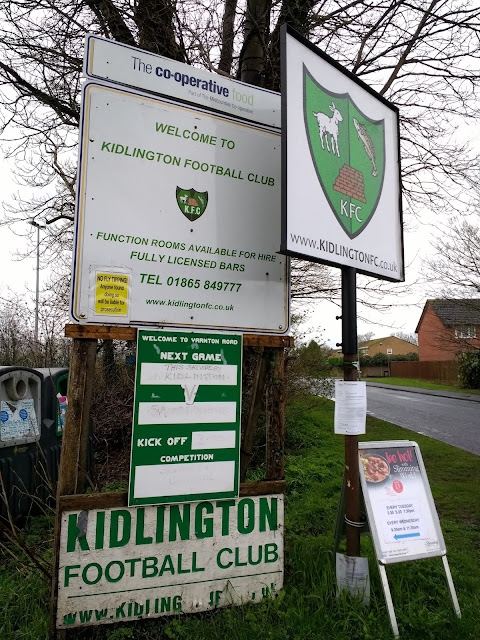 The only fly in the ointment was once again the weather. Carrying on its disgraceful behaviour, it was hosing it down all weekend. I was expecting it to be called off, what with a combination of soft referees and several games falling victim to the weather already. Still, I was going to carry on as normal until it was officially off, so after a patchy night’s sleep, I woke at 7.30 am. After checking that the game was still on, I left home at 8.30. I made my way to Kidlington, stopping at a local shop to get a paper and getting to the ground at 9.15. With a sparsely populated car park, I feared bad news, but as things stood, the game was on. The coach was due to leave at 9.30 but with a further pitch inspection going on, we held off leaving. It seemed to take ages, but at 10, we got the go-ahead to go. The news was not as clear-cut as I’d hoped, with the club saying that they were working on the pitch and there would be a further pitch inspection at 11. I was hopeful, but not entirely confident. At least there was some top comedy on the coach, Phoenix Nights is one of my favourites and it was good to rewatch it. News from other grounds was mixed, generally, matches were being called off, but positive news at Bristol Manor Farm and Wimborne gave me hope. The rain was coming down, but come 11.25, there was still no news. Finally, at 11.45 they tweeted that the game was on, provided that the referee gave the go ahead. We stopped at nearby services and with prices being the same as the high street, I got myself some chips. Thankfully, the stop was only 20 minutes and we were soon on our way. 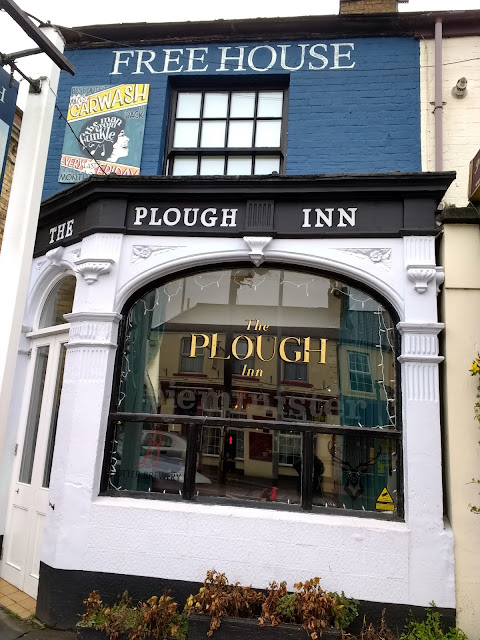 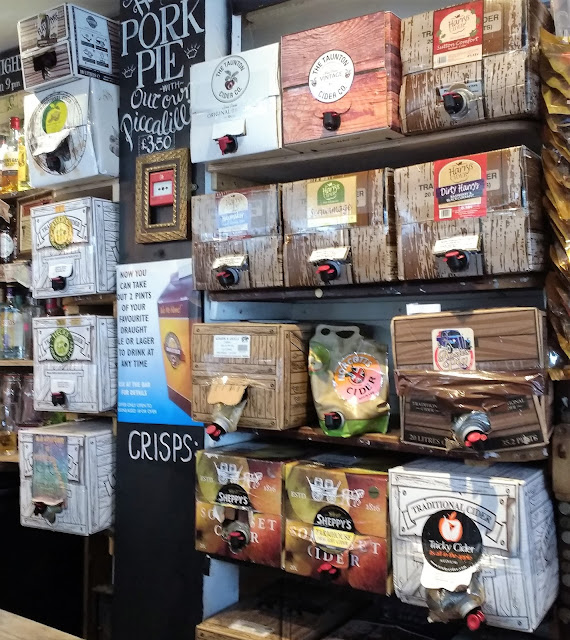 After another half an hour drive, we got to the ground at 1. The pitch looked in great nick, so I walked into town. It was about a mile and I passed the Somerset Cricket ground on the way. The Plough was even better than I’d envisaged with over 20 real ciders on offer. It was a terrific setting too, loads of nooks and crannies. My first pint was Mad Apple which was decent. It was then a pint of Sheppy’s Farmhouse along with a very nice homemade pork pie before I moved on. My next destination was The Coal Orchard, one of two Wetherspoons in Taunton. However, I was distracted by Cash Converters and bought two games for my underused PS3 - Max Payne 3 and Virtua Tennis 4 for 99p each. From there, the pub was only a few minutes walk away and so I had a nice bottle of Sheppys Traditional Organic which was very good. Time was running out now, so at 2.30, I headed back towards the ground. I stopped at Poundland along the way to get some drinks and crisps and I got back to the ground right on kick off. Entry was a reasonable £8 and I arrived just in time to see the teams emerge. Kidlington put in a good show and did their best to be party poopers, but just fell short as you can see from the match report below. 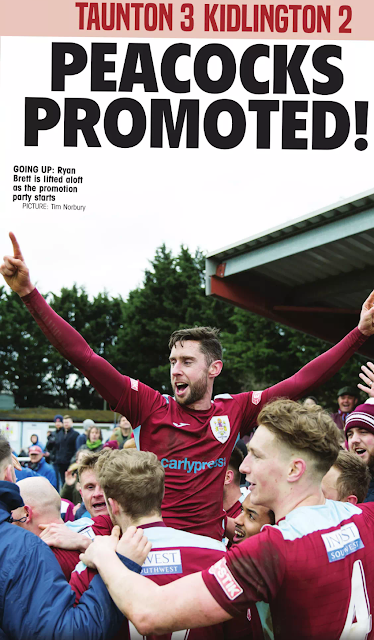 So, Taunton Town edged out the visitors 3-2, though there was very little difference between the two sides. I’m guessing that Taunton have been a little more convincing in their other games, as they were some way clear at the top of the table. Wimborne’s defeat at Bristol Manor Farm saw them crowned champions in front of a jubilant crowd of 550. I really fancied going to the other Wetherspoons but didn’t want to risk missing my coach home. Party animals Kings Langley had stayed until 7 on my last trip down this way, but these guys seemed a calmer bunch. They had certainly done their club proud, so I made my way back and waited for the players to emerge. They started coming back at 5.25 and by 5.45 we were on our way.  There was a brief stop at Barnstaple services so that the players could get some booze for the players home, but I opted to wait for a shop with a wider choice. Shameless was the show of choice on the way home and that suited me, as it’s another of my favourites. Finally, with a few drinks inside them, the Kidlington players got a bit louder, but it was all very respectable. They’d certainly done the club proud today and were unlucky not to get something out of the game. We bgot back by 8.20 with me having to wait a few minutes for the coach to unload before I could move my car. I stopped at Lidl in Oxford to get a few cans for Match Of The Day. I got home at 9.30 and typed up my blog whilst catching up on my YouTube subs. It was then the aforementioned Match Of The Day, with me pleased that I had a rare Sunday off of work and didn't have to be up at 4 am. 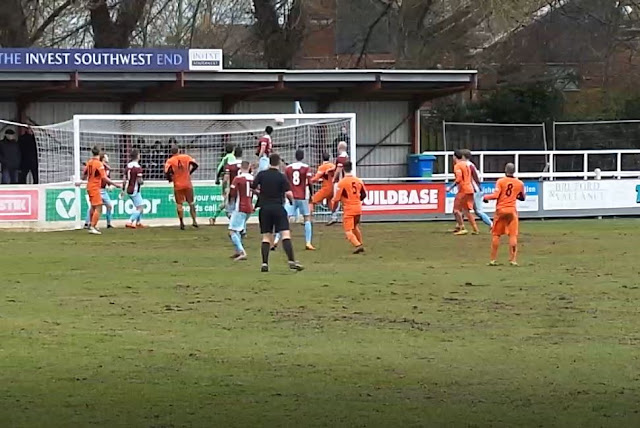 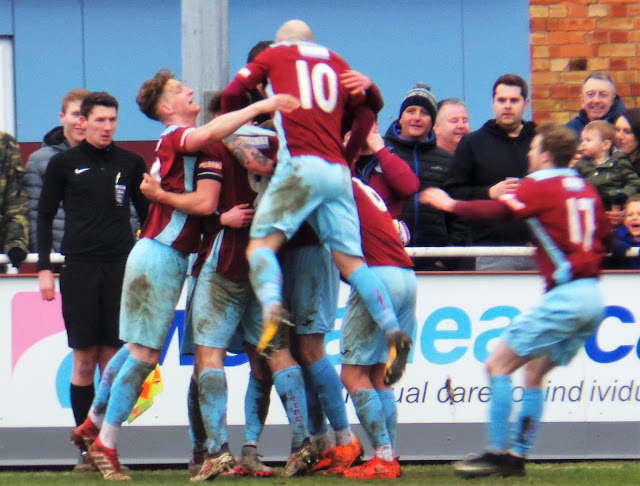 The Viridor Stadium is one of the better grounds at this level, with covered stands on all 4 sides. Both ends have covered terraces, while the sides are mainly covered seating. The far side looks the oldest and this also has the clubhouse which has a decent range of drinks. The offering at the nearby tea bar is your usual football fare, little imagination and not the cheapest. The club shop has a small range of merchandise and a few old programmes.

The town is a 10-20 minute walk away, depending on what end you go for. I’d recommend the far end, the Plough is an excellent place and does food, although not big meals. There are two Wetherspoons in town and no doubt a wide range of food places, but I didn’t get time to investigate further.

1: Ground facilities & condition (for the level)
One of the better grounds at step 4 (8)

2: Area around the ground (parking, food/drink, public transport)
Lots of parking, under a mile from town (7)

4: Value for money
£8 was good value and the right price to charge (7)

6: Programme
Colourful, but not much to read (6)

8: Tea Bar
Ok range but above average prices for the level (5)

9: Bar / Clubhouse
A good range - a real ale and three ciders from Thatchers (7) 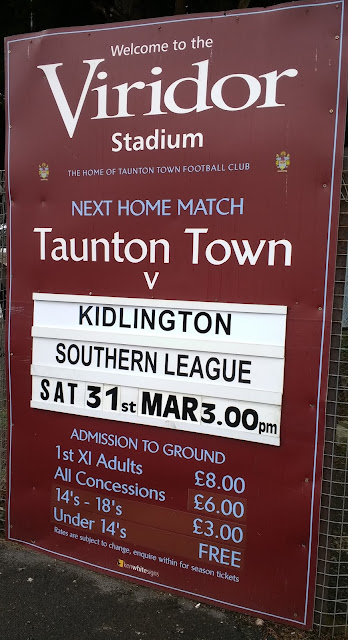 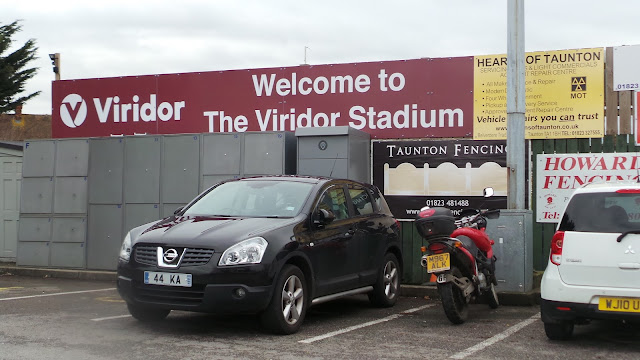 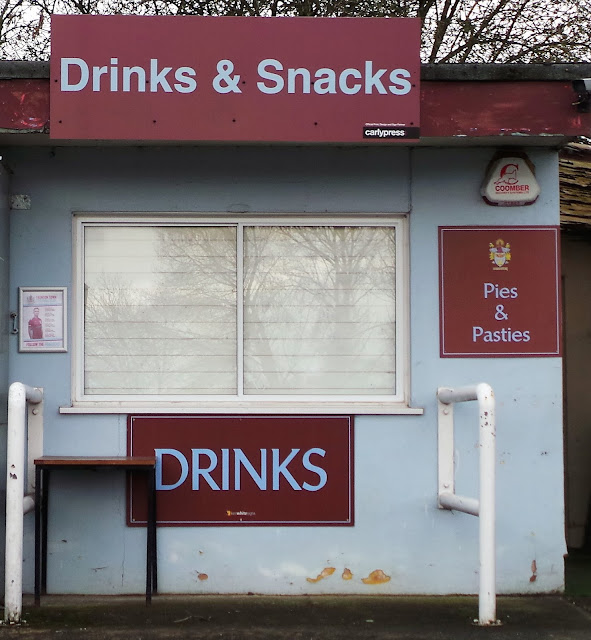 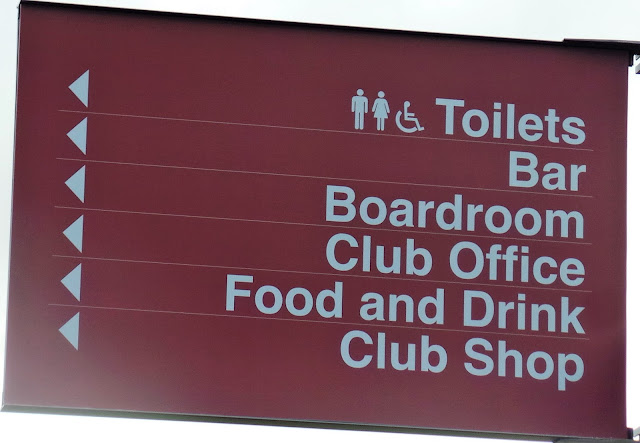 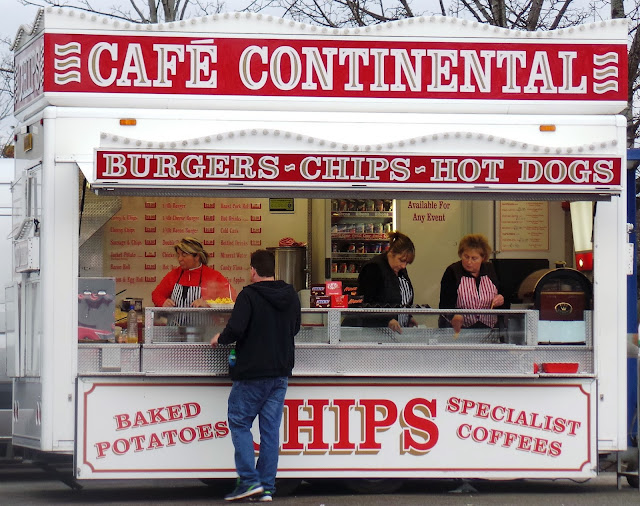 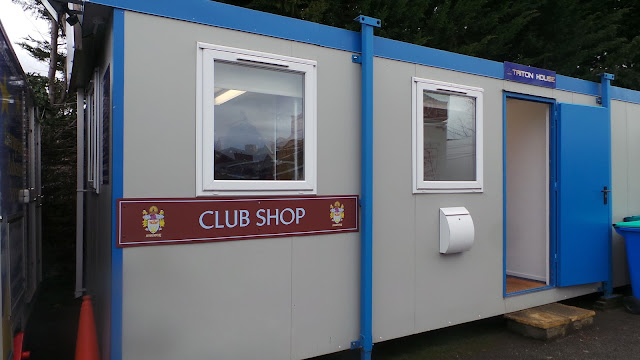 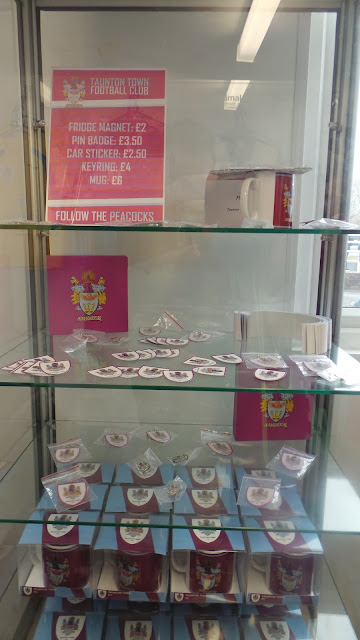 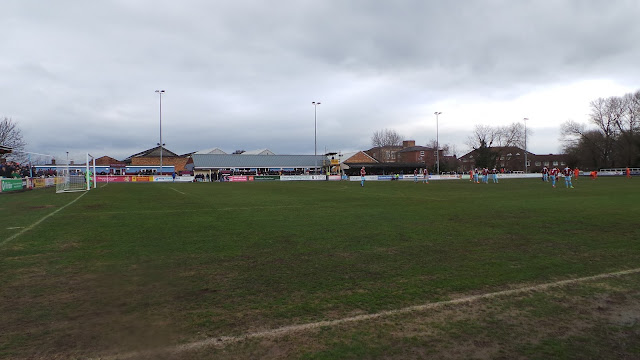 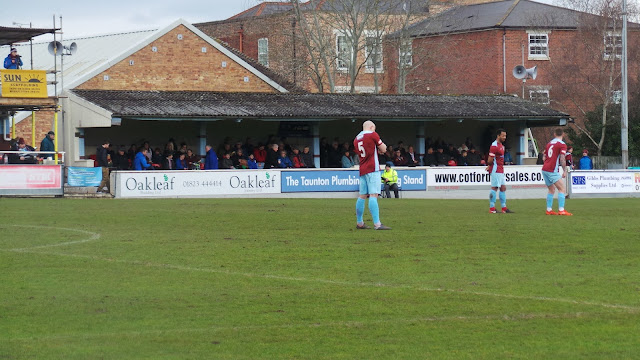 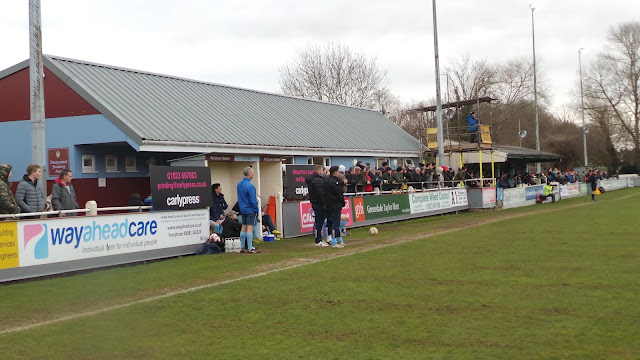 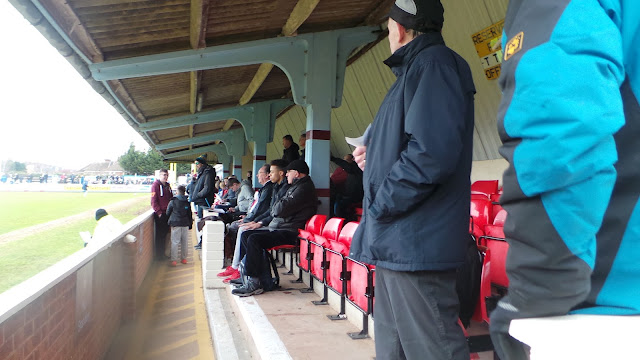 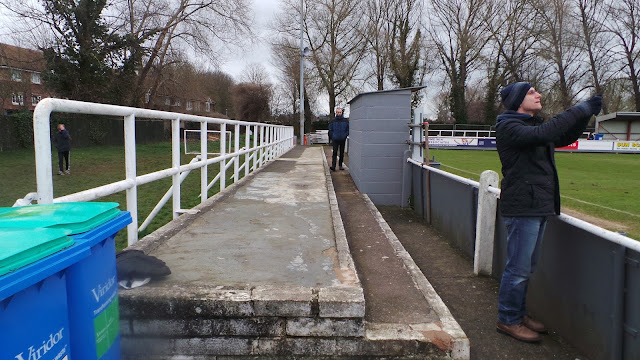 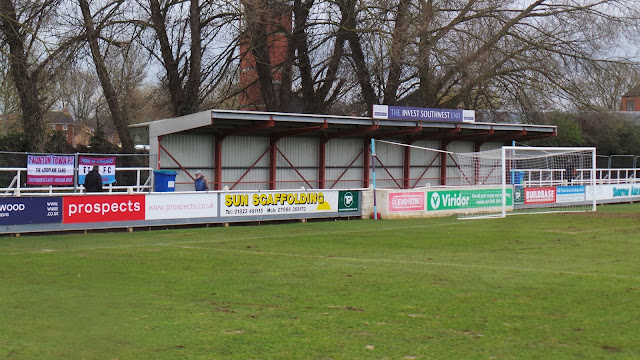 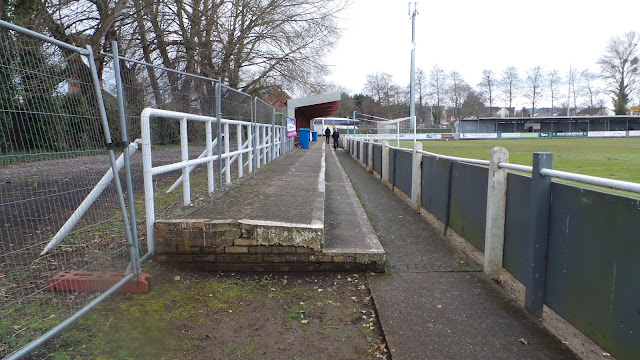 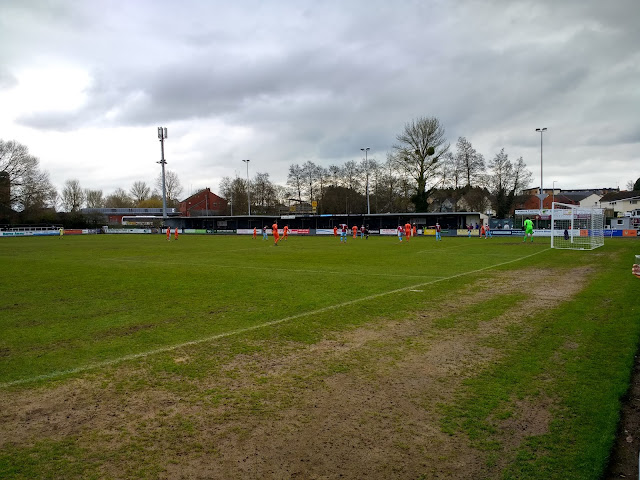 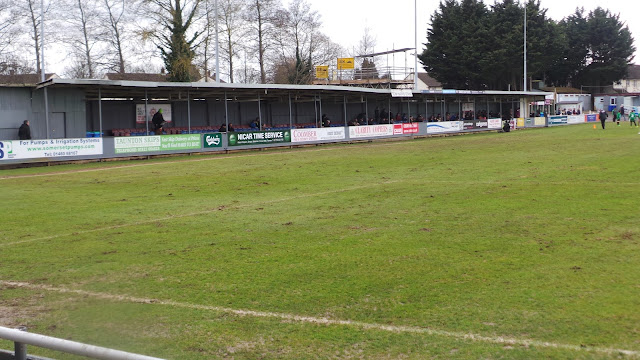 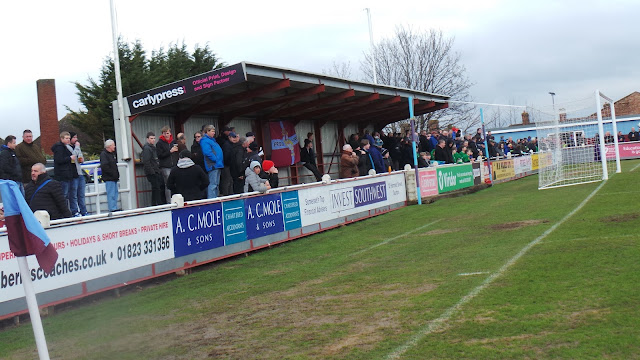 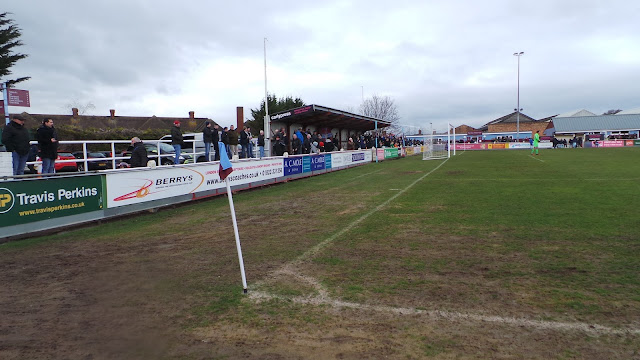 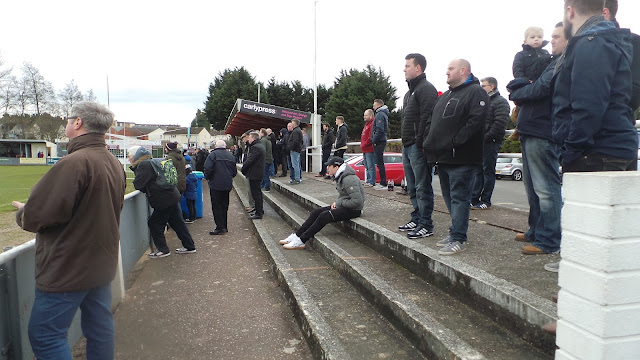 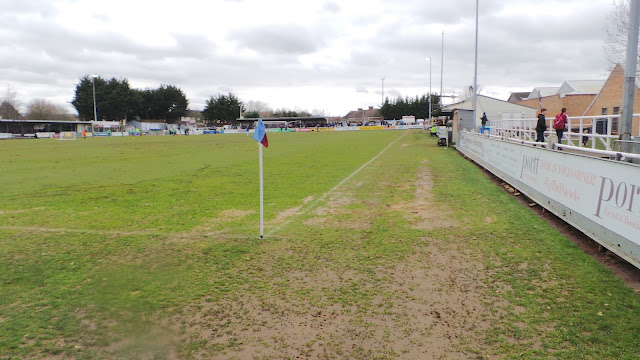