Though the exact formation date of the club is unclear, the club was established under the name of Barrow OLd Boys by former pupils of a local grammar school. After playing in local leagues such as the Leicestershire Mutal League and the Loughborough Alliance (which they won in 1941, they joined the Leicestershire Senior League in 1946. Starting in Division 2, they were briefly promoted to Division 1 in the late 1960's but were relegated back after two seasons. Changing their name to Barrow Town in 1981, they would gain promotion back to Division 1 two years later. This time, the club would fare much better, gradually improving on mid-table finishes to become Division 1 winners in 1993. Now at the present step 7 Premier Division, they coped with the step up well and even finished as runners-up to Oadby Town in their second season. Barrow Town would go on to achieve three further runners-up spots and it was the last of these in 2007 that saw them gain promotion to the step 6 East Midlands Counties League. They remain there to this day and have generally done well - the best finish being a runners-up spot behind Basford United in 2013. The club currently sit in a mid-table placing of 12th.

By far the best FA Cup run came during the 2011/12 season. After beating Kirby Muxloe, Rothwell Town, Thurnby Nirvana and Mickleover Sports, they lost 3-0 at home to Evostik Premier side Rushall Olympic. Barrow Town have also reached the FA Vase 2nd Round three times, losing to Barwell in 2000, Arnold Town the following year and Quorn in 2005. Local cup wins include the Loughborough Charity Cup five times, the Battle of Britain Memorial Cup on three occasions and the Sileby Cup in 1969. 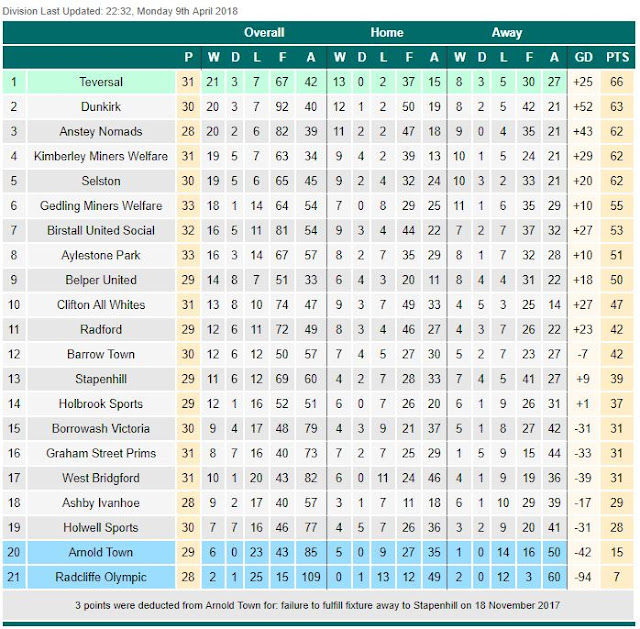 This latest groundhop was devised whilst I was travelling back from Barnstaple on the Didcot Town team coach on the previous Saturday. I was happy to have Anwar back and even with his limited budget for petrol money, there was still around 10 possible options. I chose what I l felt the best of these in Cadbury Athletic v Ilkeston Town. There'd sure to be some decent food options in Birmingham and it was a fairly close one meaning that I wouldn't get back too late. I did my research over the weekend, researching the history of the host club and finding a dinner place less than a mile from the ground. I'd had a good nights sleep on the night before the game and did my usual walk down town and around the shops that I do on my day off. After a decent lunch of Firecracker Chicken and Mexican Rice, I spent the early afternoon putting together a Twitter list to keep an eye on any situation with waterlogged pitches. There was still a ludicrous amount of games being called off for mid-April and with the FA flatly refusing to extend some league's seasons sufficiently, clubs are going to have a real battle to get the games all played. 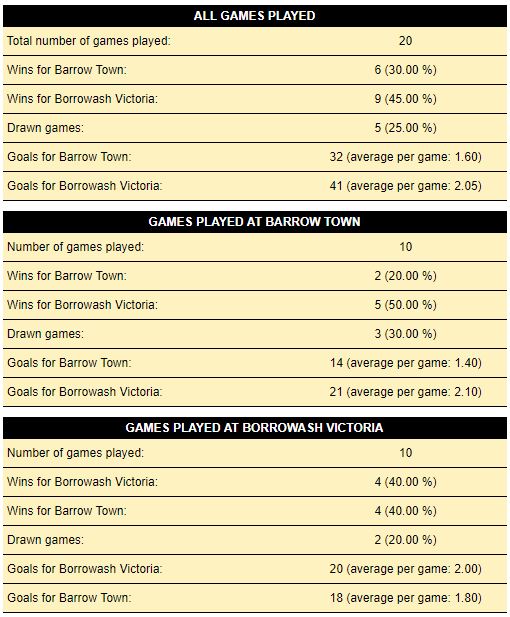 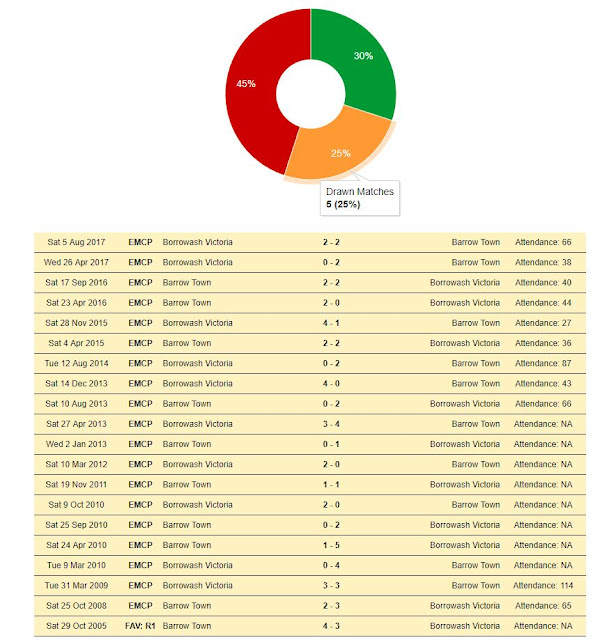 By the time 2PM rolled around, there were at least ten options still standing with Barrow Town tweeting that their game was definitely on. Despite early morning confidence, the bad news came after 3PM that the Cadbury Athletic game had been postponed due to a waterlogged pitch. I decided to play it safe by heading to Barrow Town, seeing as they were confident. There were also a lot more backups available on that side of the country, even though it would lead to me playing the M1 lottery, which is unreliable at the best of times. I even had time to do a bit of research - despite Barrow Town being above opponents Borrowash Victoria in the table, it was the visitors who had the upper hand in previous meetings. I left at 4.15 to meet Anwar but my progress in and out of Aylesbury was hindered by roadworks. There was also the usual delay in Milton Keynes - as if going through there wasn’t unpleasant enough already. But generally, the journey was good, even on the M1. We got to the ground at 6.45 and got some good pictures of the outside. After going in, we headed to the tea bar after hearing good things about it. It was only hot dogs and burgers, but at £2.50 my bacon and sausage roll was decent enough and good value. We sat in the bar while we caught up online and waited for kick off. 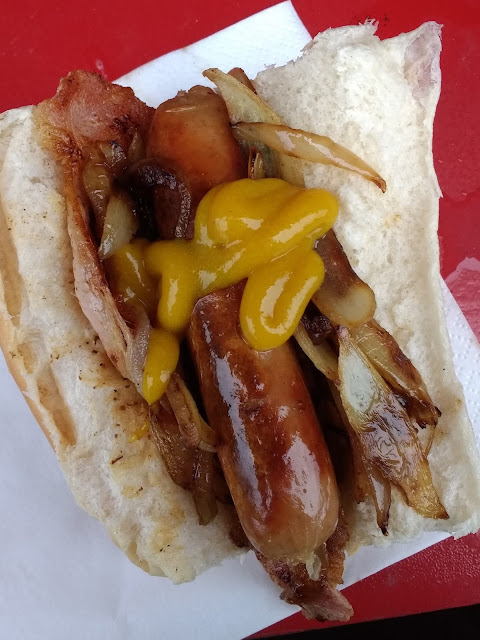 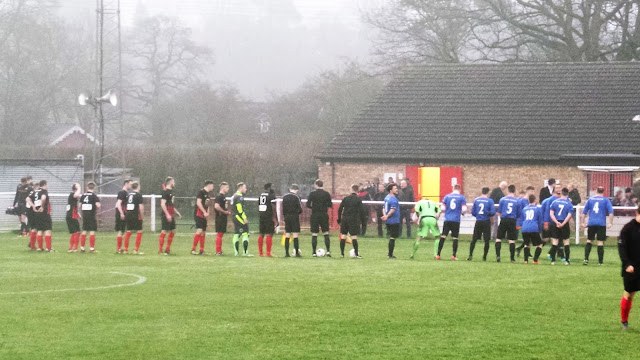 It was the hosts who were asking all the questions early on. They took the lead after 9 minutes. The visiting keeper parried the initial shot but the rebound was put in by Chilaka from a few yards out. Barrow continued to push forward and were awarded a penalty on 18 minutes. Chilaka stepped up to convert despite the Borrowash keeper going the right way. Borrowash came close to reducing the arrears on a couple of occasions but it was generally the hosts bossing the game. We were kept company by some friendly fans who enjoyed football as much as we do which made for good conversation. There were 32 fans in attendance overall, obviously affected by the Champions League being on TV. The second half continued in much the same vein and Chilaka completed his hat-trick on 58 minutes with the goal of the evening. The ball was crossed from the right and Chilaka took the ball down and drove home into the bottom right-hand corner. It was another decent goal to confirm the win right on full time, the ball being driven home from the edge of the area for 4-0.


After the game, we said our goodbyes to our fellow football fans and headed off. We decided to go to a Chinese first as Anwar hadn't eaten as he is a Muslim and can't eat pork. We both like the Salt and Chilli chips that you get from the Chinese so we went to a place called Orient House in nearby Sileby which had good ratings. It wasn't until 10.10 that we set off for home, though at least we had both had dinner. The chips were decent enough and the portion was huge, but I still finished them off. We listened to the phone-ins on the way home with all the talk being about the Champions League where Liverpool had surprisingly won 2-1 at Manchester City but in an even bigger shock, Roma had beaten Barcelona 3-0 to win on away goals. In the games that I'd foregone to see this one, Melton Town had beaten Harrowby United 1-0, Downham Town had beaten AFC Sudbury 3-0 and Lye Town had overcome AFC Wulfrunians 4-1. All other options were postponed and overall I was happy with my choice of game, even though it was a tad one-sided. I dropped Anwar off at 11.55, getting home myself 25 minutes later and going straight to bed. Even so, I was still tired the next morning at 4am and needed a nap the following afternoon.

RIVERSIDE PARK is a fairly basic but very well kept ground. You can get a great view of the ground from a bridge behind one goal. Inside the ground are three small stands one metal terrace holding around 100, a metal stand for 50 and a small concrete terrace for around 20. The rest of the ground is open hard standing. Food at the ground is restricted to burgers and hotdogs while the bar has a reasonable range of drinks. There is a village nearby, but I didn’t check out what was there.

1: Ground facilities & condition (for the level)
Quite basic but immaculately kept (6)

2: Area around the ground (parking, food/drink, public transport)
Plenty of parking, close to the village (6)

4: Value for money
A fiver is a fair price for this level (7)

9: Bar / Clubhouse
Nice and bright, a reasonable range of drinks (6) 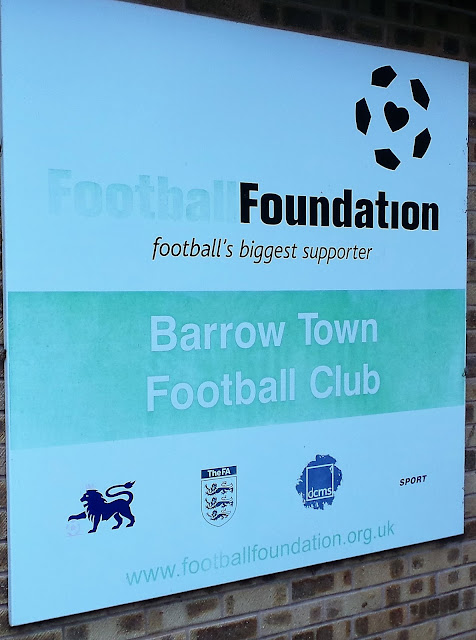 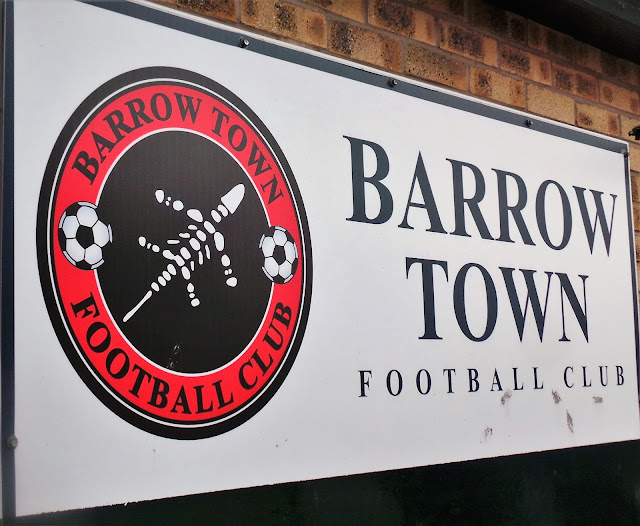 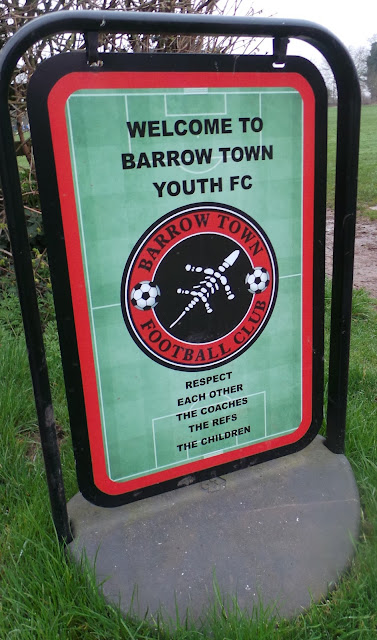 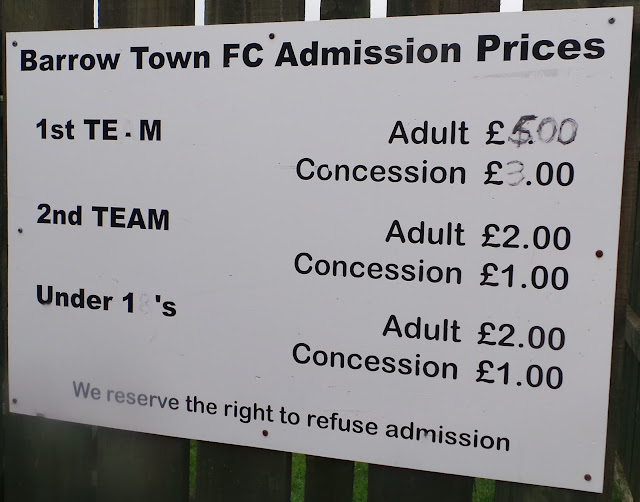 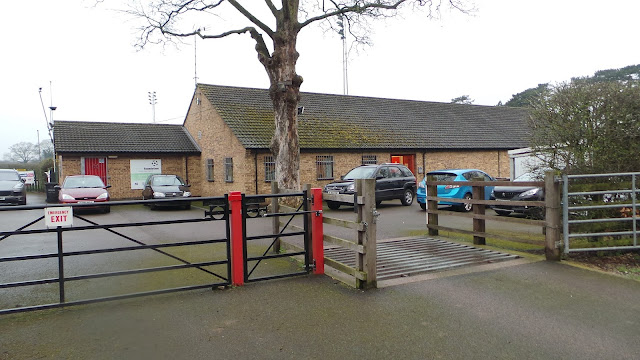 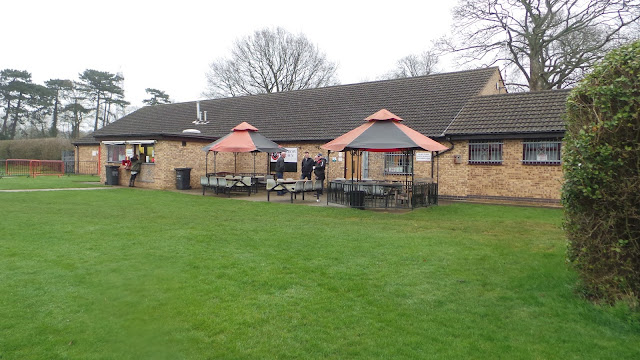 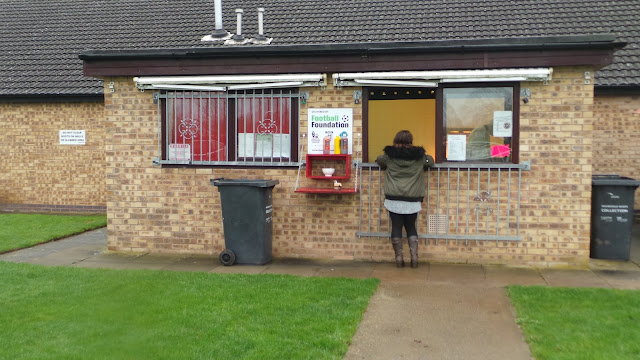 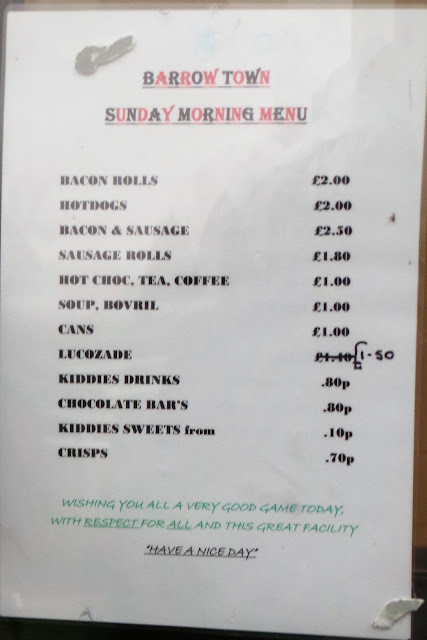 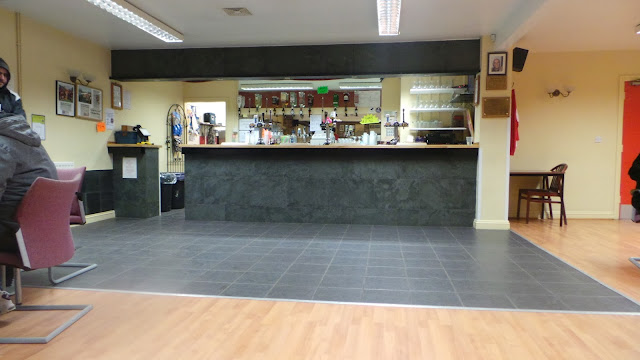 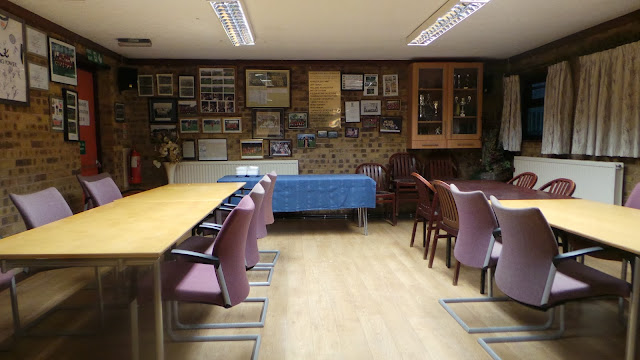 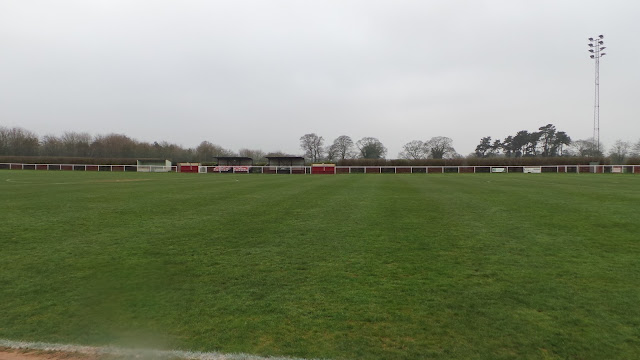 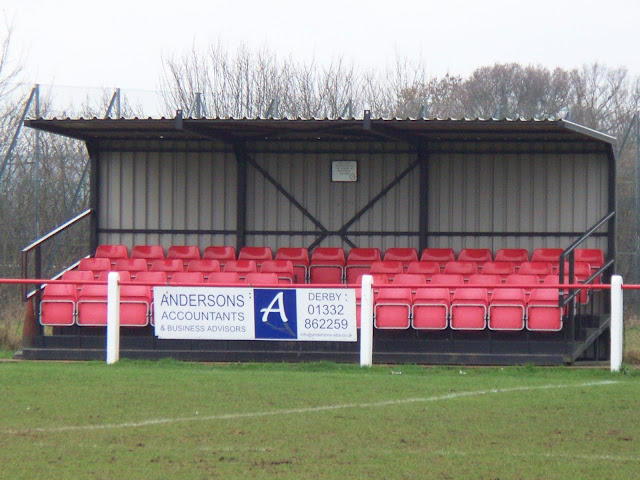 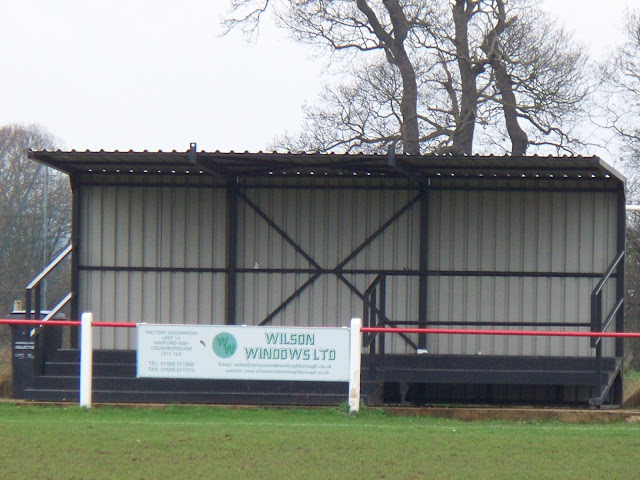 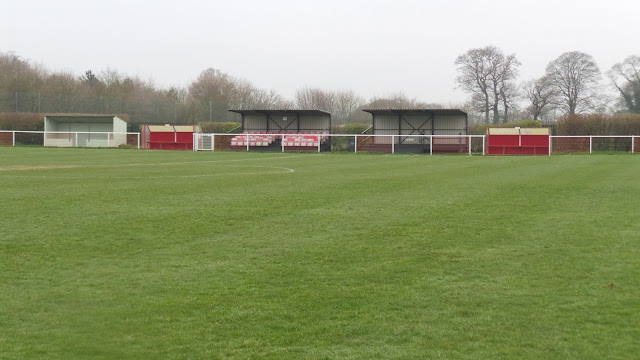 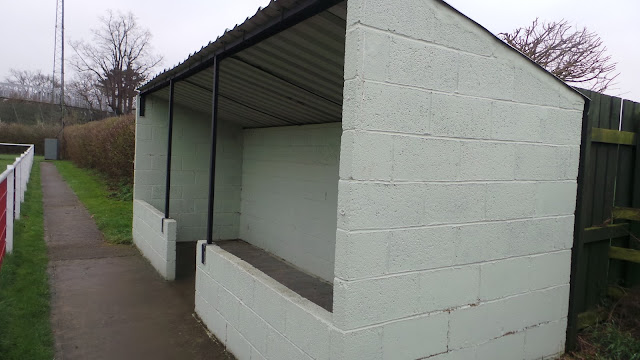 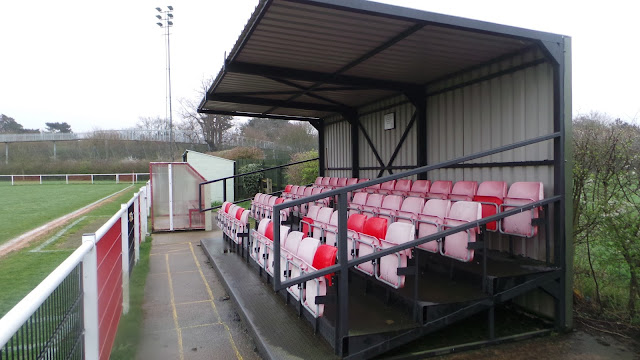 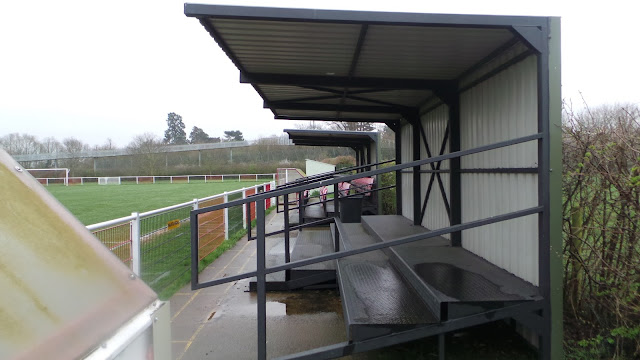 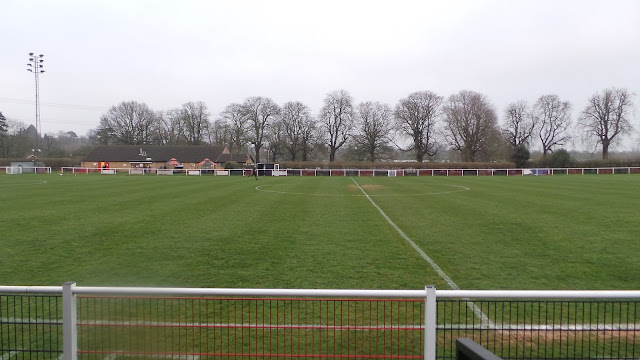 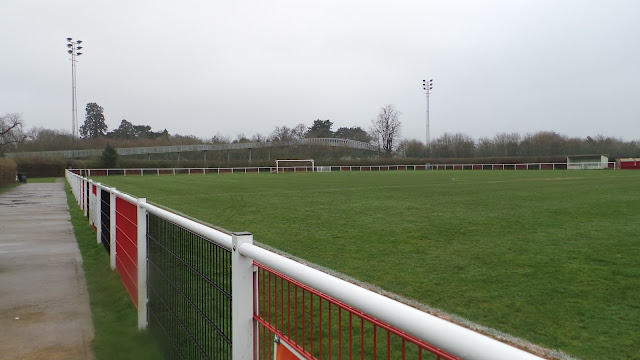 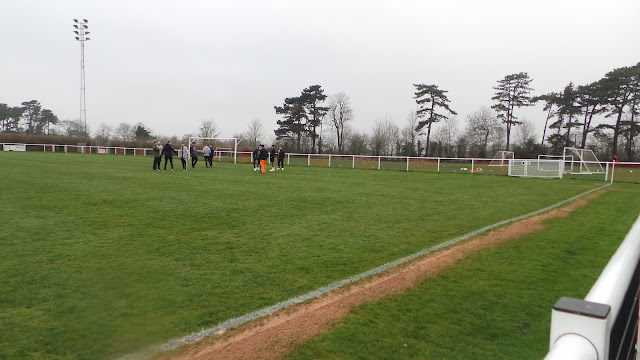 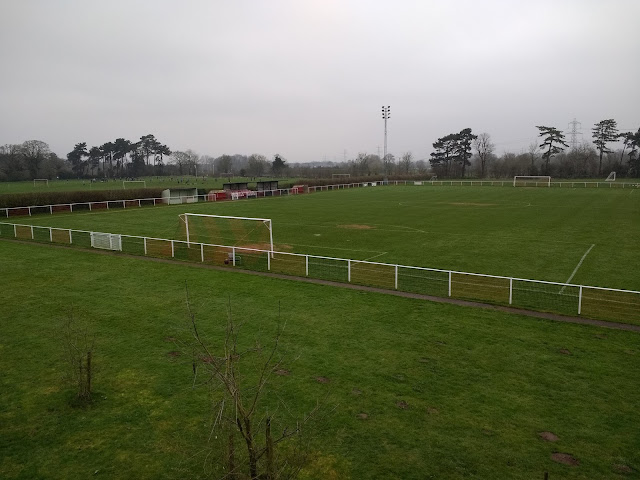 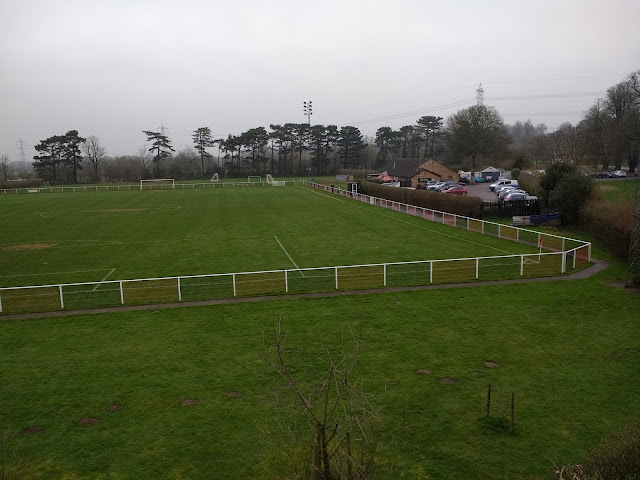