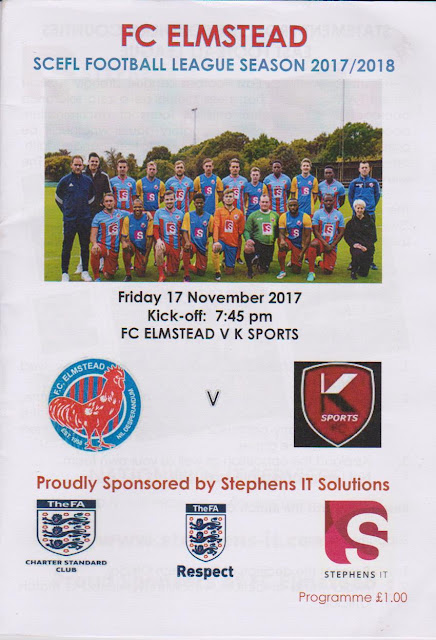 The club was founded in 1958 as Elmstead Rovers, changing their name to the present one in 1964. After starting out as a Sunday League side, they progressed to local Saturday football. The club has progressed greatly in recent years. After joining the Kent County in 2013, they enjoyed two promotions in a row. Firstly in 2013/14, they finished as runners-up to Stansfield OBC Reserves in Division 3 West and then again to the same team in Division 2 West in 2014/15. In 2015 they joined the Kent Invicta League. This was rebranded as the Southern Counties East League Division 1 the following season and FC Elmstead have posted two 11th place finishes so far. This season, they have improved greatly and are in 4th place prior to tonight's game.

FC Elmstead have not yet entered the FA Cup, but they do have a couple of years FA Vase experience under their belt. They made their best progress last season - beating Southwick and AFC Uckfield before losing to Sporting Club Thamesmead in the 1st Round. The most famous player to play for FC Elmstead is defender Colin Foster - he went on to play for Nottingham Forest, West Ham United, Leyton Orient & Watford. The club have been based in Chislehurst and Coney Hall in the past, but currently groundshare at Holmesdale FC in Bromley 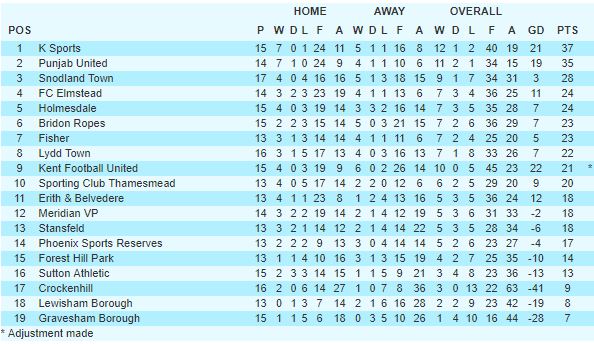 I always enjoy a bit of Friday night football but had been unable to find any for around a month. What with the weather getting worse, the choice was limited, so I was glad when FC Elmstead announced a home game on this Friday. It had the bonus of being doable on the train, meaning that I'd be able to leave my car at the station and use the train for the most part. The only drawback was that the ground was a couple of miles away from the station, but at least buses were fairly regular.  After checking the weather earlier in the week, I spent the latter half looking forward to the game but was unsure whether to stop in central London en route or go straight to Bromley. On the day of the game, it was a busy day at work, and I didn't get out until 1,15, after buying some shopping. I came home, had some burgers for lunch before having a bath. I had a few things to sort out at home, so after getting ready, I left at 3.25. My decision had been made for me with regards to what to do before the game, with time not on my side, I decided to go straight to Bromley South station. 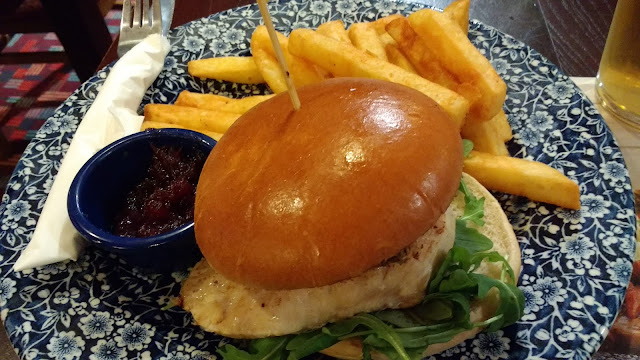 I got to a side road near Amersham station and parked up. Typically, I just missed the train. The platform was very busy and despite charging peak prices, they were offering an off-peak service, with another 20 minutes to wait until the next train. I got the train at 4.06 and was glad to grab a single seat. I read my paper and listened to the Two Mikes podcast to pass the time. After changing at Marylebone, Oxford Circus and Victoria, I got to Bromley South station at 5.35. It was straight across the road to Wetherspoons number 148, the Richmal Compton where I had their festive chicken and stuffing burger. I had to make do with Strongbow as they were out of Thatchers Gold, but it was decent for £8. Even if they diddled me out of the two pigs in blankets, a point that I couldn't be bothered to raise, even if they are my favourite thing about Christmas. With the other Wetherspoons in Bromley being a mile away in the opposite direction and me not fancying another pint, I decided to walk the 2.5 miles to the ground. I got there at 7.15, seeing Dulwich fan and groundhopper in denial Mishi at the turnstile. Entry was a good value £6 including programme and after getting some pictures of the bar, I went outside to get some snaps of the ground. There were no flat pack stands here, it was refreshing to see everything built from scratch, with the ground in a nice setting too. 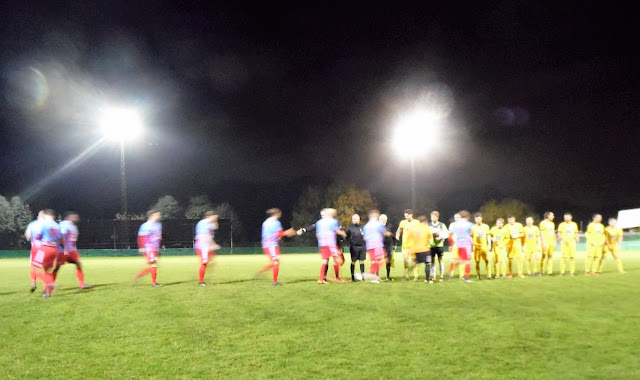 The game started off bang on time, maybe a bit early in fact. The first chance fell to the hosts, with a low shot behind flicked wide of the right-hand post and it was indeed Elmstead that started the brightest. K Sports fashioned a similar chance on 10 minutes as the sought away back into the game, with one of their players requiring brief treatment as he collided with the pitch surround. It was 1-0 to the visitors on 17 minutes, a diagonal ball played into the box and a low finish from the edge of the six-yard box by James Alderman. The visitors had capitalised on a spell of dominance, but the hosts kept having chances of their own. It was 2-0 on 31 minutes after poor marking allowed Bailey Pearce to finish with a low shot from the edge of the area. FC Elmstead grabbed a goal back six minutes from the break as the visiting defence was caught napping and Charlie Sharman finished from just inside the area. The halftime break came and I got a decent portion of chips from the tea bar. The hosts came close to equalising on 49 minutes, the K Sports keeper needing to be at his best to tip a speculative shot over the bar. Ten minutes into the second half, the visitors sealed the game, an initial shot was saved, but Caine Smith followed up by chipping the ball over the stranded keeper. Both sides had chances after that, most notably the home side had a shot cleared off the line, but it wasn't to be their night. The visitors slowed the pace of the game down and as a result, the last 20 minutes saw very few chances. 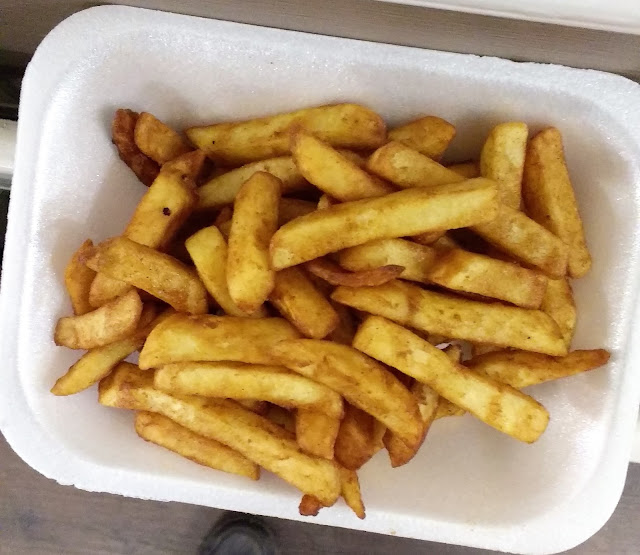 After the game, it was just under 10 minutes to the bus stop, as I didn't fancy the long walk. I went via Orpington station this time, as it was slightly more convenient. The bus got to the station just after 10 and I then had just over 10 minutes to wait before my train. I went to London Bridge, ironically one of my favourite parts of London, what with it having Borough Market and a few good pubs. The market was long closed and I avoided the temptation of a pint as I had to drive after my train journey. The train was really smart, nice and modern with tables and comfy seats, me wishing they were all like this. It was a fair walk to get to the underground station, which was a lot busier. I was just a bit too late to get the earlier train, but after changes at Finchley Road and Harrow on the Hill, I got back to Amersham at just after midnight. It took me another 20 minutes to get home after walking back to my car. I got in and had a can of cider whilst writing this blog and watching YouTube videos, having enjoyed my end to the week. 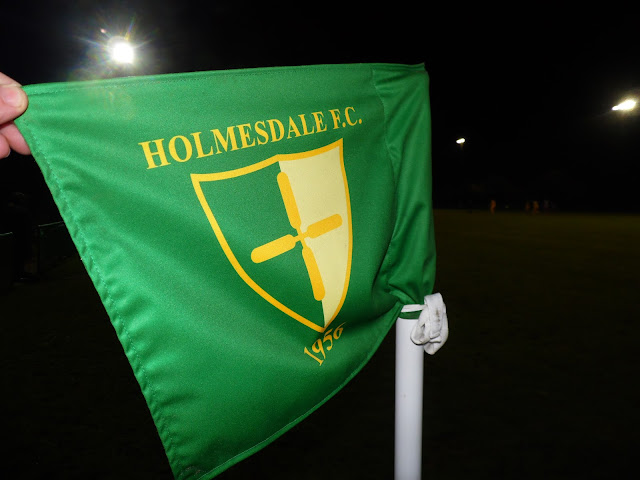 The Dale or Oakley Road as it is sometimes known is a classic non-league ground. Both the areas of cover have a very rustic feel to them, built with scaffolding. The seated stand is steep and as such offers good views, despite the supporting poles. The seats are padded too and the stand holds just over a hundred undercover. There is standing behind the goal for the same amount under cover, whilst the rest of the ground is open and despite being old is well kept.

There's an average bar and a decent tea bar present, but no club shop that I saw. The ground is a bit off the beaten track and you face a fair walk (or a bus) from either Bromley or Orpington. The former is probably your best bet if you fancy something pre-match - it has two Wetherspoons and a range of other pubs and food places. It's also the nearest town. Parking at the ground is limited, but there is a fair amount of street parking available.

1: Ground facilities & condition (for the level)
A classic non-league ground, worth a visit and offers all the cover you will need on a normal match day (8)

2: Area around the ground (parking, food/drink, public transport)
A few bus routes are a short walk away, parking limited, not much in the immediate vicinity (5)

3: Welcome / Club Friendliness
A nice welcome at the turnstile. (7)

4: Value for money
Common sense value at £6 including programme (7)

7: Game entertainment
A decent clash lost its spark towards the end (6)

8: Tea Bar
Burgers, chips and hot drinks, more than most at this level (7) 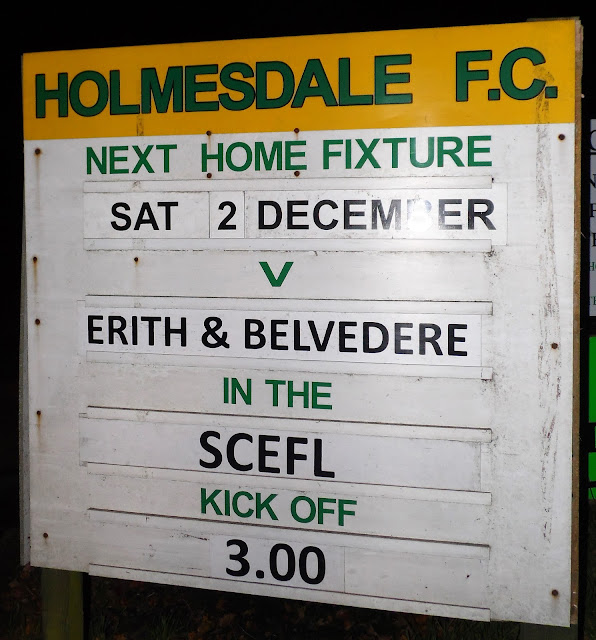 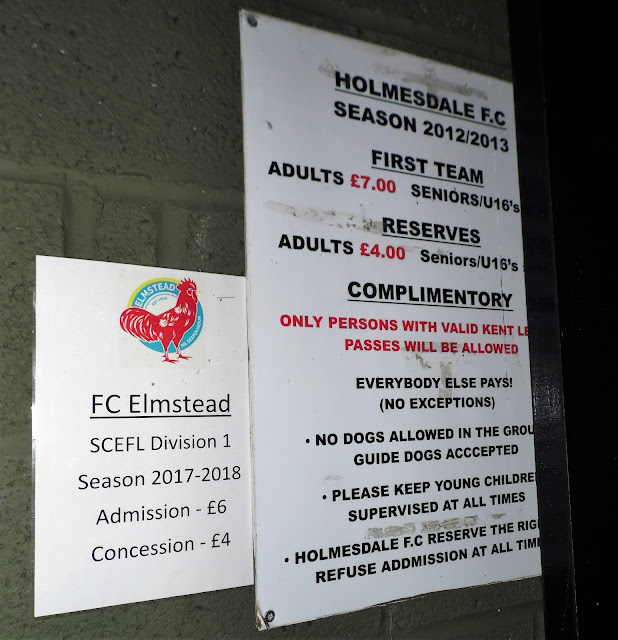 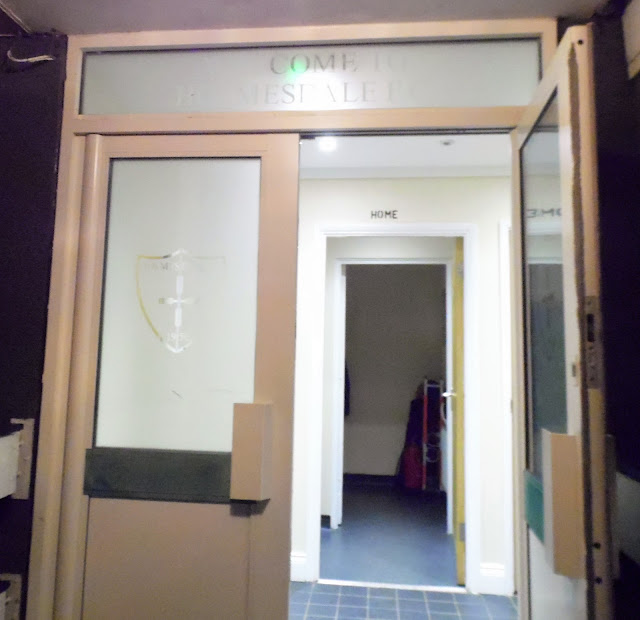 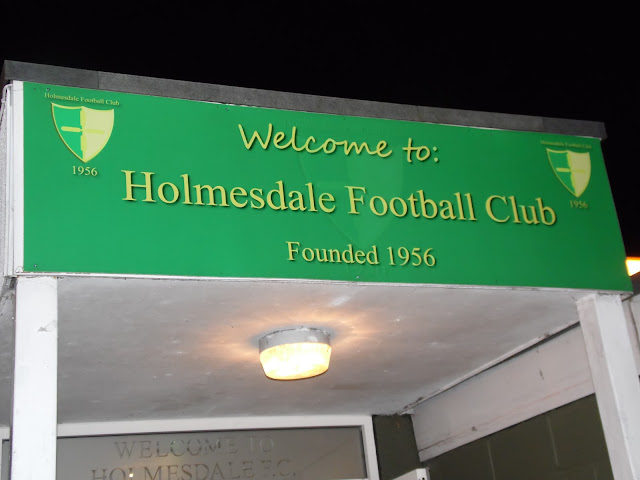 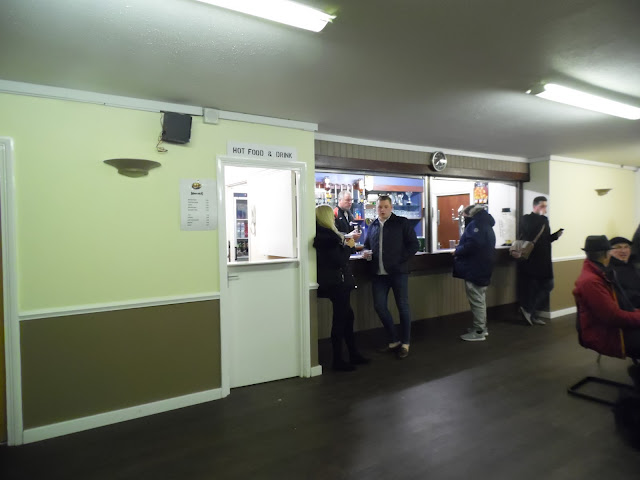 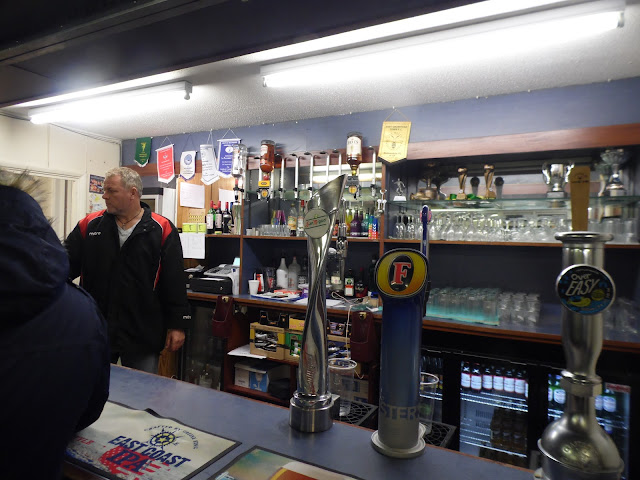 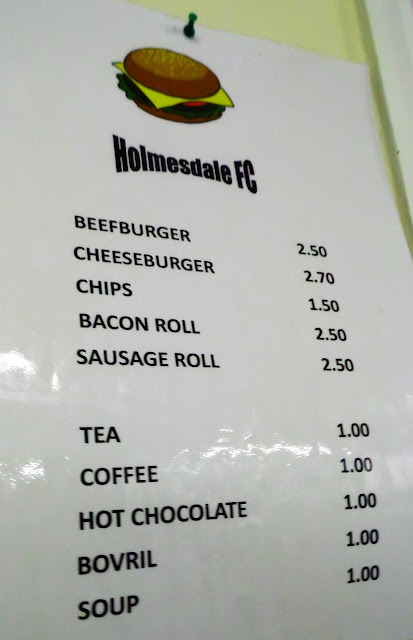 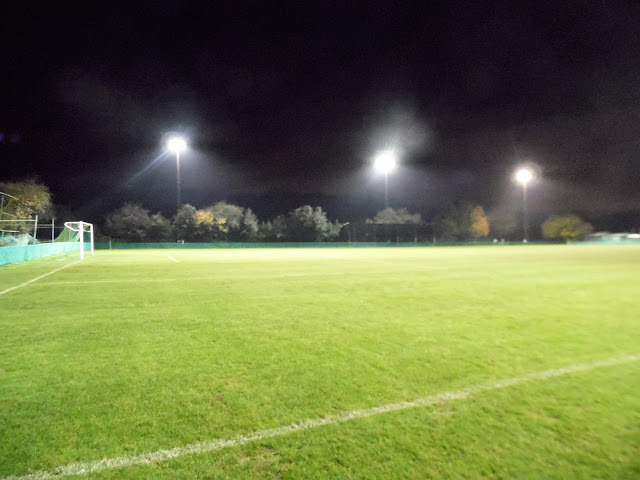 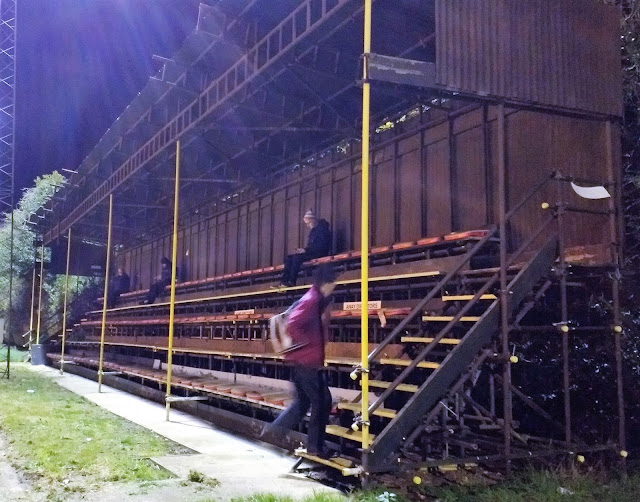 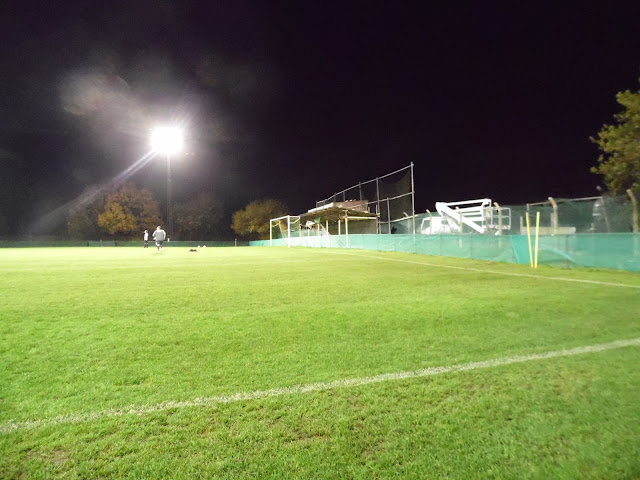 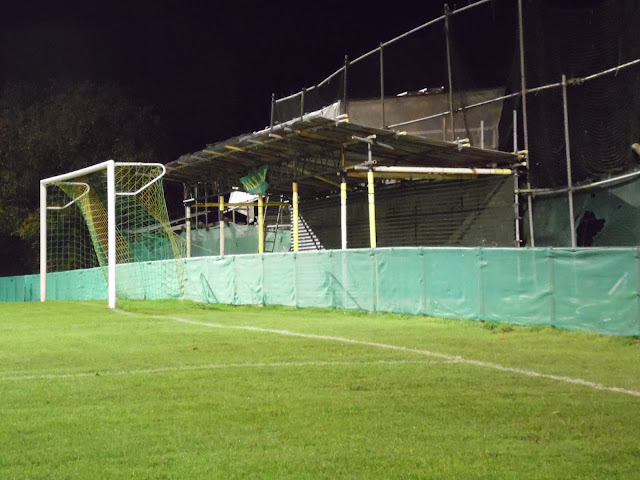 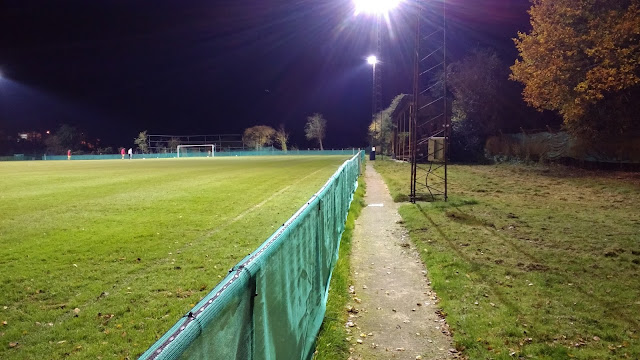 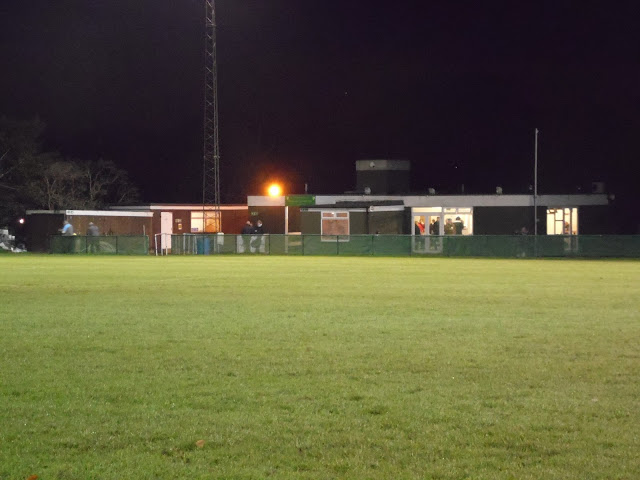 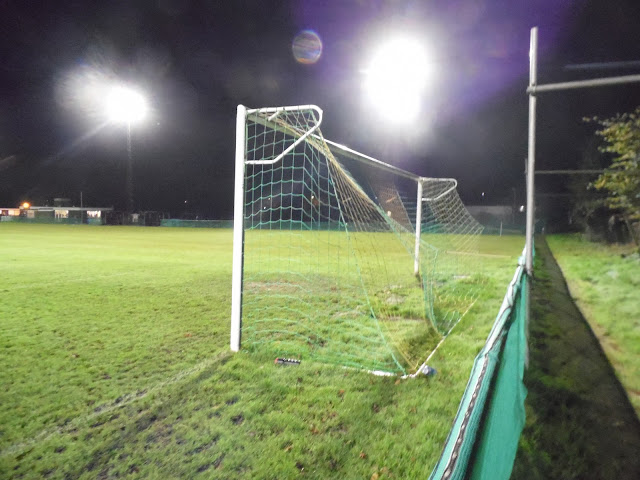