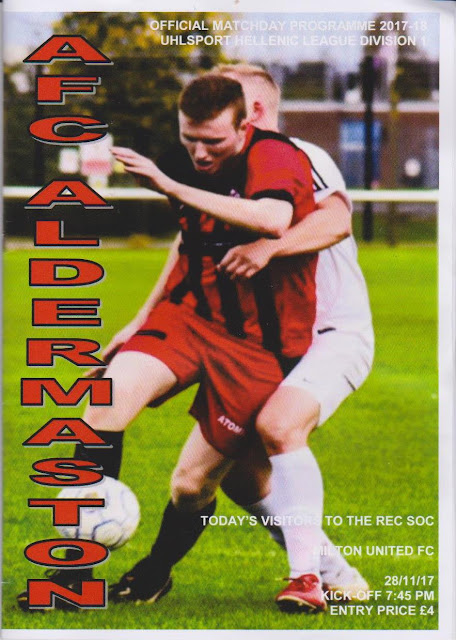 The club was formed in 1952 and were nicknamed 'The Atom Men' or 'The Atomics' due to them being based at the Atomic Weapons Research Establishment. They were known as AWRE FC up until the early 70s and have played in local leagues for most of their history. Spells in the more well-established leagues started with a spell in the Hellenic D1 where finishes ranged from 7th in their debut season of 1979/80 to 16th in 1985/86 when they left the league after finishing bottom. Spells in various Hampshire leagues followed - at the turn of the century, reorganisation saw Aldermaston placed in the Hampshire Premier. They struggled with the two division step up and in 2004 joined the Wessex League. Fortunes were mixed here with a 14th placed finish in Division 1 being their best finish in 2009. The following year was a disaster, with them losing a record 40 consecutive games, unsurprisingly being relegated back to the Hampshire League after winning one game all season. There then followed a series of mid-table finishes, with Aldermaston switching to the Thames Valley Premier League in 2014. Following a 7th placed finish in 2016, they made the step back up to the Hellenic Division 1 East. Their second debut last season saw a credible 7th placed finish, both their best finish in the Hellenic League and in the current football pyramid. This season sees them sitting third-bottom in 12th place, although they have a few games in hand on other teams around them and stand a good chance of a result against second-bottom Milton United.

AFC Aldermaston made their FA Vase bow this season but went out at the first hurdle after losing 3-2 at home to Romsey Town in a 1st Qualifying Round tie. The club has had no players that have gone on to greater things, but their groundsman used to be Eddie Seaward who left to join the All England Lawn Tennis Club in 1990 and won an OBE in 2007 for 'Services To Sport' 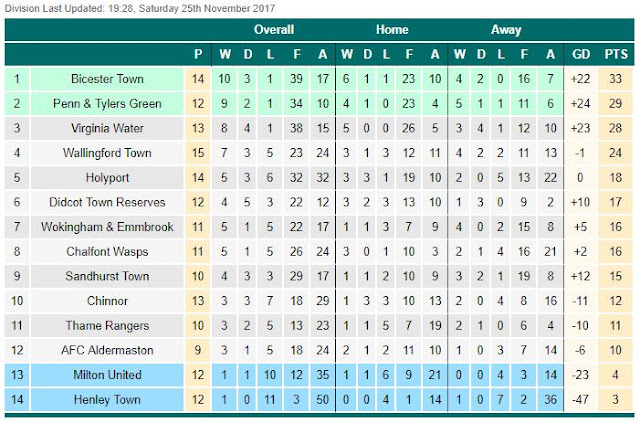 Once more, fellow groundhopper Anwar was unavailable as he was skint, so I was on my own. I didn't mind, however, as there was a fairly local option at AFC Aldermaston and I'd been looking to keep the mileage down anyway. The weather was looking chilly again, with temperatures forecast at 3 degrees. Just in case, I had Basingstoke as a backup should I suffer a late postponement although with me trying to keep costs down, the £12 entry wasn’t ideal. I certainly wouldn’t mind visiting again though, before it goes at the end of the season, but I’d rather save it for a bigger game. On the day of the game, I woke at 6.30 am, though that wasn't too much of a problem as I'd gone to bed at 10.30 and am usually up at 4 for work. I did my usual 4-mile walk down town, having lunch and getting a lift back with my Dad. I spent the afternoon at home, having steak and chips before leaving at 6.10. It was a good journey over and the Two Mikes podcast kept me company for the hour journey. I followed another car into the sports complex, sitting in the car park for 10 minutes before going in. 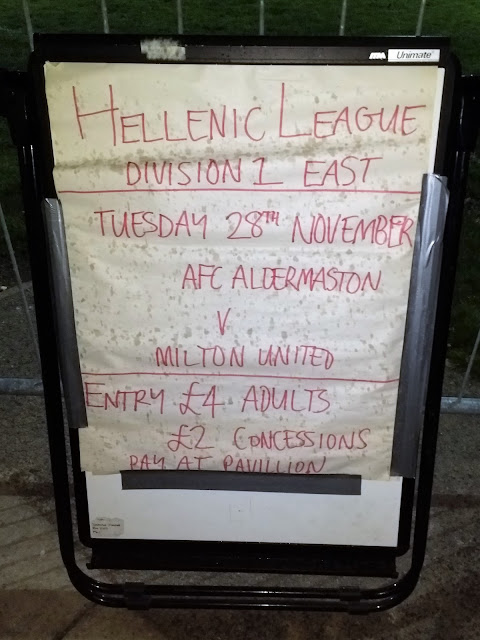 I was given a nice welcome at the gate, paying an excellently priced £4 including programme to get in. After getting some pictures of the basic but well kept ground, I went and stood on the elevated pavilion balcony to watch the game. The game started at a good pace with AFC Aldermaston well on top and they forced a corner and an excellent save from Milton keeper Craig Griffiths in the opening few minutes. The visitors had some chances of their own, although mainly on the break, even having a shot cleared off the line. The story of the opening half hour tended to be a lack of quality in the final third though. Milton opened the scoring on 34 minutes thanks to Joe Morgan's excellent right-footed volley from the edge of the area. A couple of minutes before halftime, the hosts got a deserved equaliser, Craig Masterton heading home a Luke Mitchell corner. However, their joy was short-lived as Milton retook the lead in the last minute of the half, Jordan Goddard netting from close range after good work down the right. 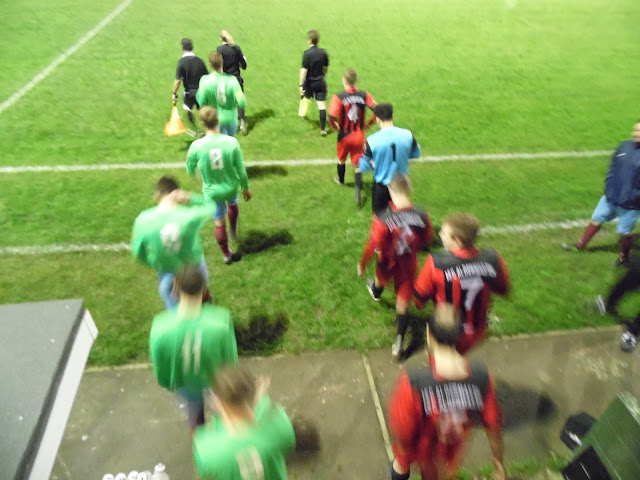 Aldermaston looked to change things at halftime with a double substitution. They were rewarded on 50 minutes when Callum Easton drilled home from the edge of the area, his shot finding the bottom left-hand corner. They nearly took the lead soon after when an excellent 30-yard dipping shot was tipped over the bar by Griffiths. It eventually was 3-2 on 65 minutes, a curling shot by Masterton into the roof of the net giving the hosts the lead.  On 76 minutes Masterton completed his hat trick, making it 4-2 with another shot into the roof of the net to seemingly end the game as a contest. However, Milton United staged a late rally, pulling a penalty back after a foul just inside the area on 78 minutes. Despite having a shot cleared off the line, the visitors couldn't find the equaliser.

I’d briefly checked the bar at halftime, though didn’t buy anything. After the game, I said goodbye to Vinny and another hopper who had been good company during an exciting game. I left at 9.40, listening to the football results and reports coming in on the way home. I got in at 10.30, but couldn't get to sleep until 12, not ideal with me being up 4 hours later. I had a decision to make for my next game on Saturday, the eventual winner being Tiverton Town v Kings Langley, aided by the fact that I could travel on the away team's coach for a tenner, a real bargain with the train fare being ludicrously expensive. 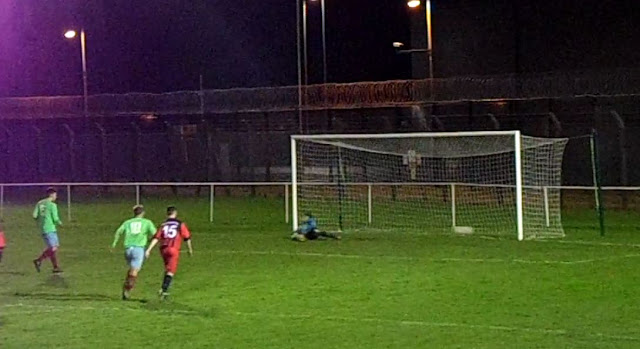 AWE RECREATIONAL SOCIETY or the 'REC SOC' for short is one of the most basic venues at step 6 as it has no cover or seating. It's not without its charm though and is a well kept and pleasant place to watch football. The best viewing can be had from the pavilion staircase, this is well elevated and provides a great view of the action. There's a basic tea bar in this pavilion, serving hot drinks and snacks. Outside is a bar, part of the Atomic Weapons Research Establishment, this is pretty decent, with a choice of real ales and proper meals, plus Strongbow for cider drinkers. There's plenty of parking, although it seems a fair way from the town or any other establishments.

1: Ground facilities & condition (for the level)
Basic, but well kept (4)

2: Area around the ground (parking, food/drink, public transport)
Plenty of parking, but a bit isolated (4)

3: Welcome / Club Friendliness
A good welcome from all I spoke to (7)

4: Value for money
£4 including programme was excellent value (9)

5: Social Media & Website
Both were of a decent standard (7)

6: Programme
A decent effort for a freebie, well presented and had all the facts (7)

7: Game entertainment
An excellent contest that kept up a good pace all night (8)

8: Tea Bar
Basic, but served its purpose on a cold night (5) 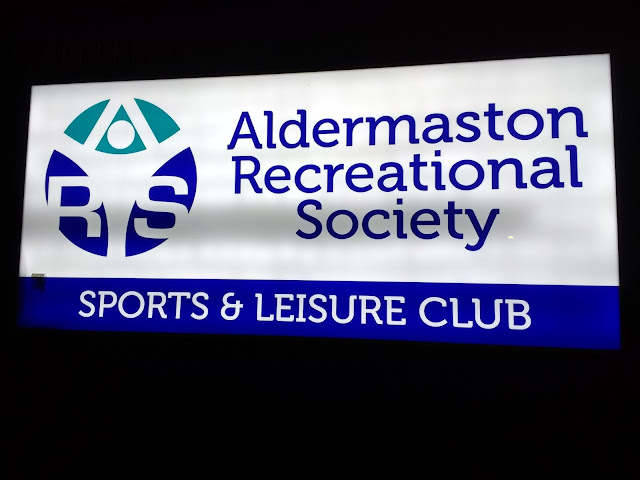 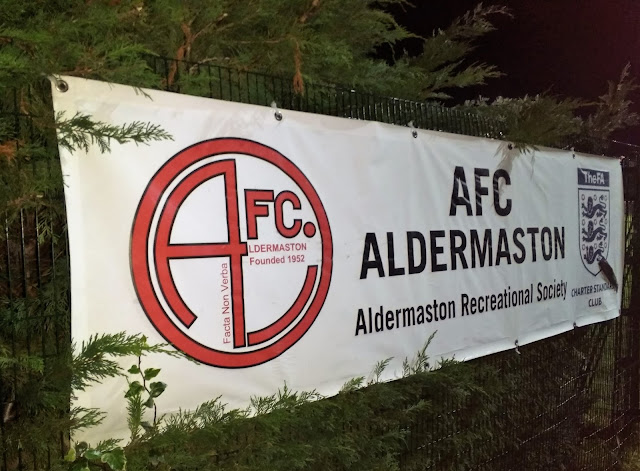 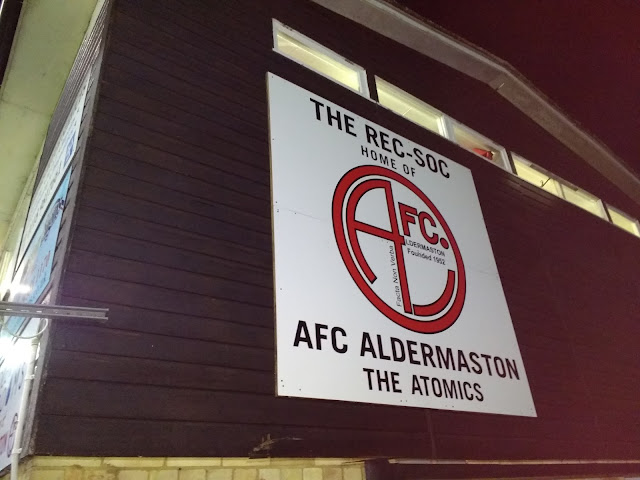 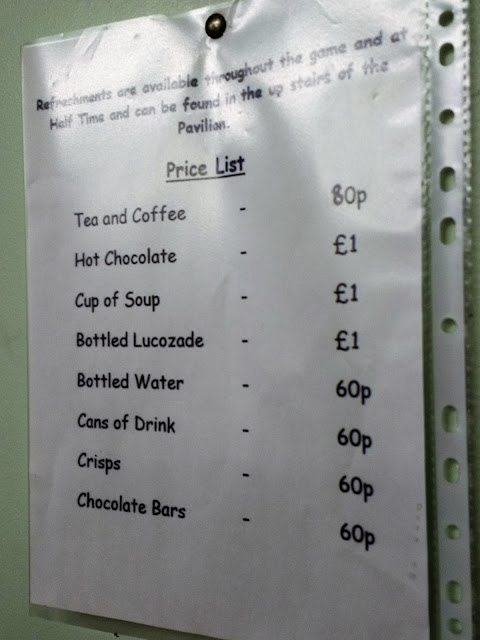 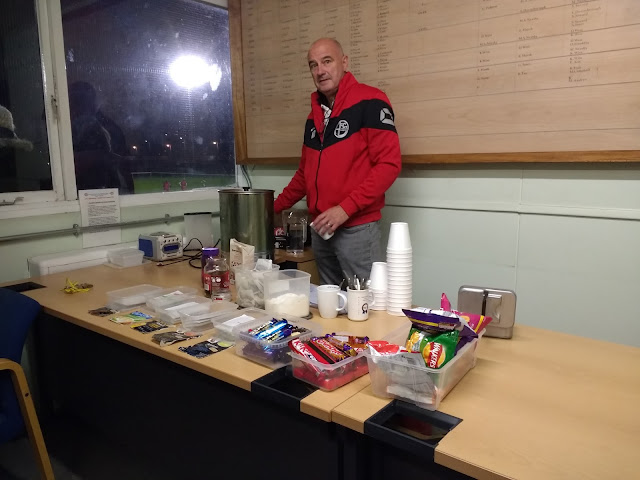 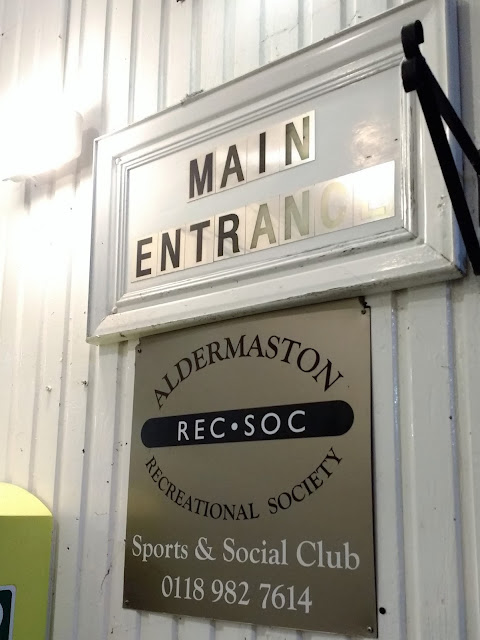 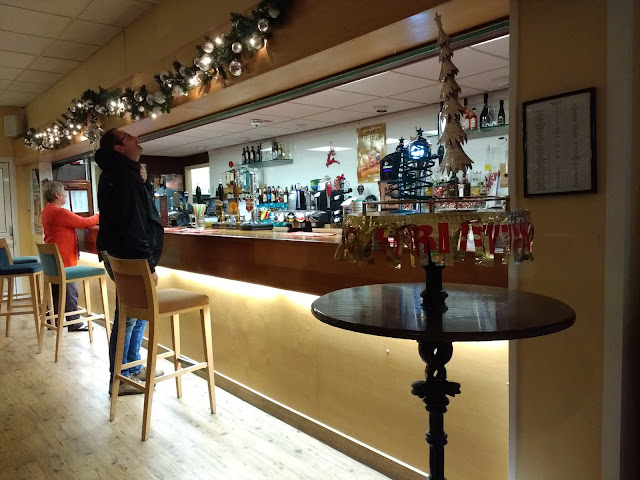 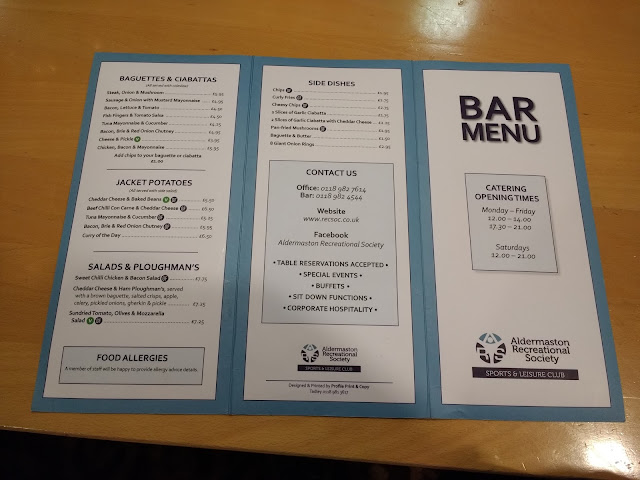 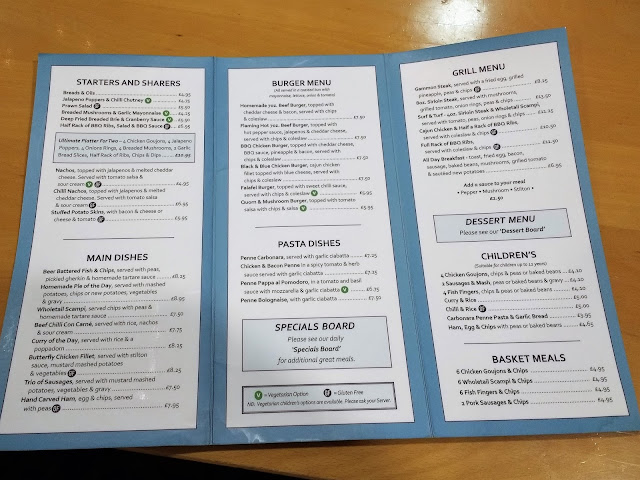 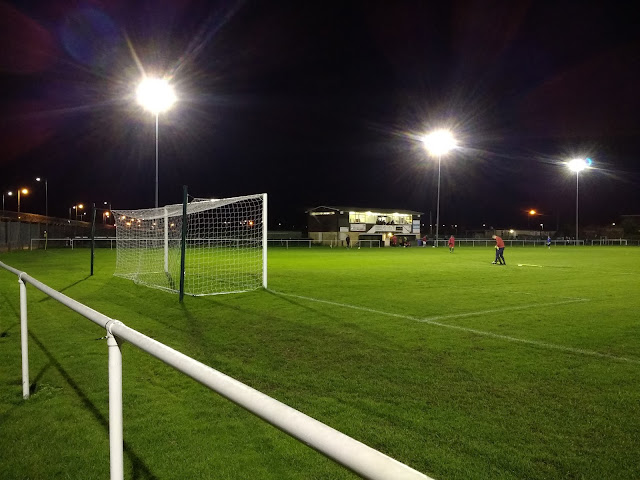 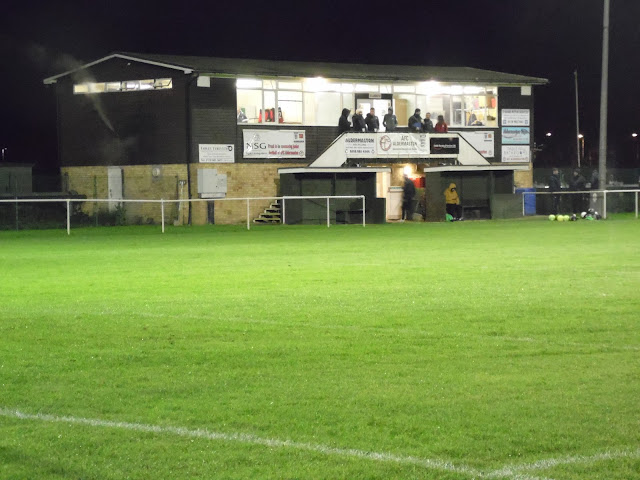 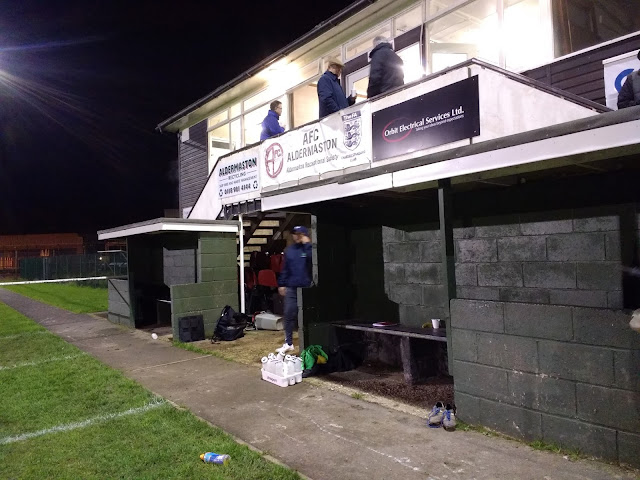 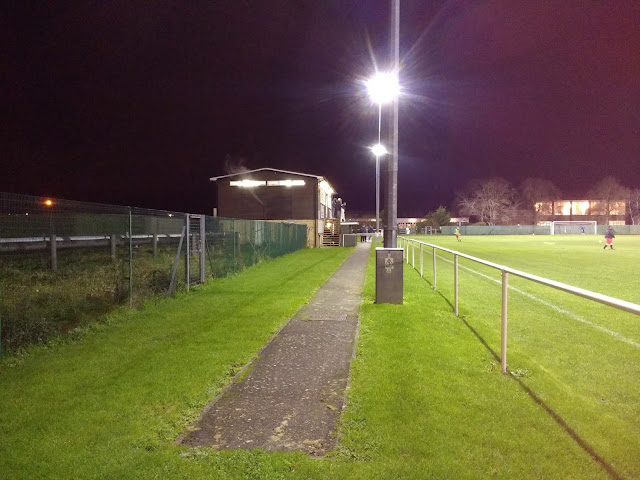 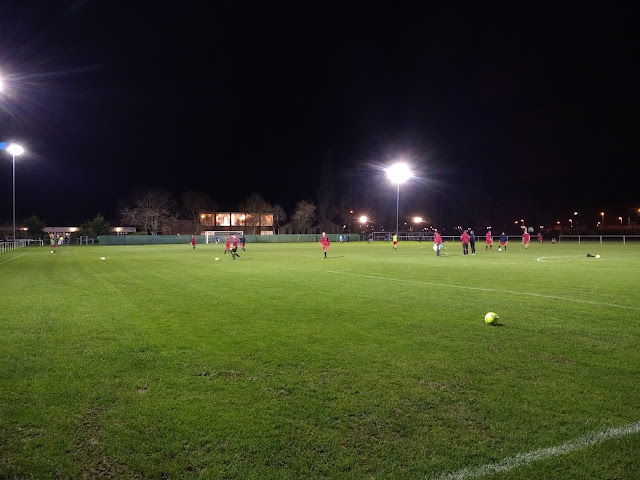 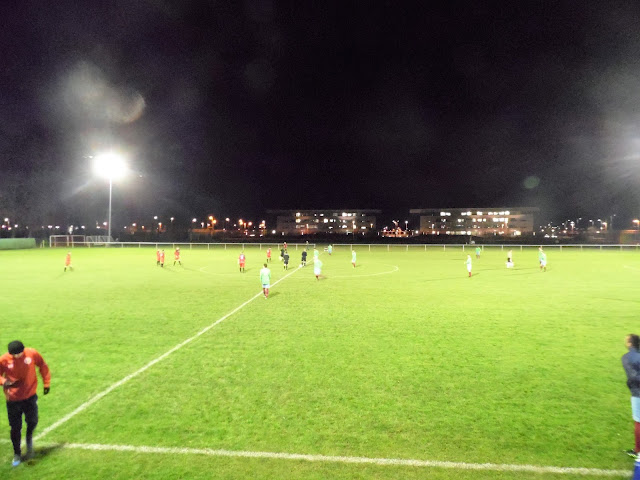 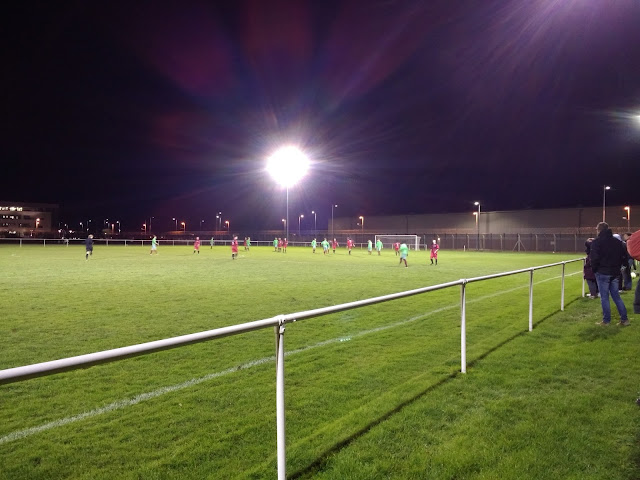