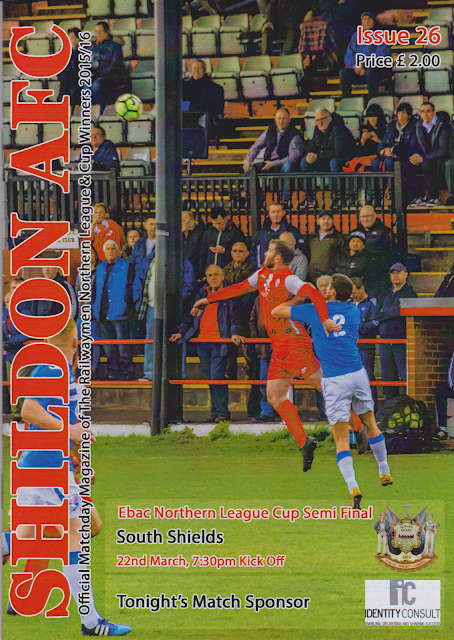 SHILDON FC was formed in 1890 and were known as SHILDON ATHLETIC up until 1923. They joined the North Eastern League in 1907 and enjoyed a best-ever finish of 3rd in their debut season. Shildon played in the Northern League for four seasons before that and they moved there full time in 1923. They've played there ever since and have lifted the title on six occasions - five times in the late 1930s after finishing as runner-up in their first season and then again last season. Despite their first championship in 77 years, they took the stance of many Northern League clubs and opted not to take promotion to the NPL due to extra travelling costs. Since the Northern League switched to a two-tier league in 1982, they've spent the vast majority of their time in the higher Division 1. Their worst finish came in 1986 when only the inappropriately named Esh Winning kept them off the bottom of Division 2. They've been ever-present in the top tier since 2002 and came into tonight's game sitting in 3rd place, a couple of points behind tonight's visitors South Shields.

Shildon were fairly regular participants in the FA Cup 1st Round in the late '50s and early '60s although the last time they reached this stage was in 2003/04. Victories over Workington, Durham City, Frickley Athletic, Shirebrook Town and Stocksbridge Park Steels rewarded them with a game at Notts County where they lost 7-2. The club reached the FA Vase Semi-Final in 2012 only to lose 4-3 over two legs to Tunbridge Wells. In other national competitions, Shildon have 2 FA Amateur Cup Quarter-Finals to their name as well as a couple of FA Trophy 3rd Qualifying Round appearances. Locally, they've won the Durham Challenge Cup twice and the Ernest Armstrong Memorial Cup on 9 occasions. 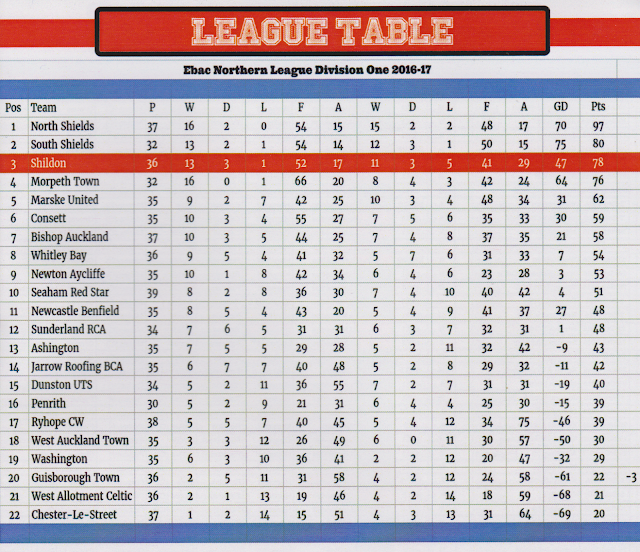 MY VISIT
On the day of the game, I woke around 7 am. I decided not to bother with an afternoon game as it would most likely be a revisit to a ground I'd done in fairly recent times. It would give me the luxury of more time at home, with be being able to leave as late as 11 am if I so desired. I used the extra time to get some breakfast, finish last night's Cinderford blog, and indeed start tonight's one. It turned out to be a good choice, with the post coming just after 11 am and bringing my Football Traveller with me. Sadly it didn't offer any Friday night games to extend my stay up north, but it did at least present a couple more backups for tonight.  It was my Dad's birthday, so I wished him all the best, before leaving around 11.30. It was raining at home and the disgusting weather followed me all the way up the M1, with me stopping at Leicester Forest services for a comfort break and update on the weather. I got to my hotel at 4 and my worst fears were confirmed - My original game at Darlington v Bradford Park Avenue was off. 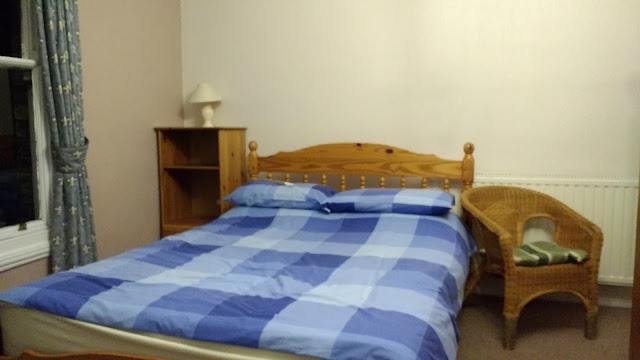 It didn't surprise me to be honest. The amount of rain that had fallen had been incredible for late March. I thought I'd be stuck in for the night, but really my problems paled into insignificance given what was happening in London. Once again there had been a terrorist attack, with some window licker using religion as an excuse to act like a complete scumbag. Luckily the death toll was not huge as I started looking around for alternative games, but one person dead is too many. There emerged 3 candidates that could possibly save me. The best game was Shildon v South Shields, this was my original choice before Darlington cropped up. The best weather-wise was Newcastle Benfield with no rain until 8. However, the pathetic accuracy so far today made me treat that with disdain. The most friendly by far was Stokesley who were extremely helpful and kind after what had been a frustrating day so far. Just before 6 came the news that Shildon had confirmed game on, and with this being the nearest I plumped for this one. I felt bad for turning down Stokesley after their great help, but this was the better game, with Newcastle Benfield a little further up the A1 should it suffer a late call off. I left just after 6, and by 6.40 I was parked up outside Shildon's Dean Street ground. 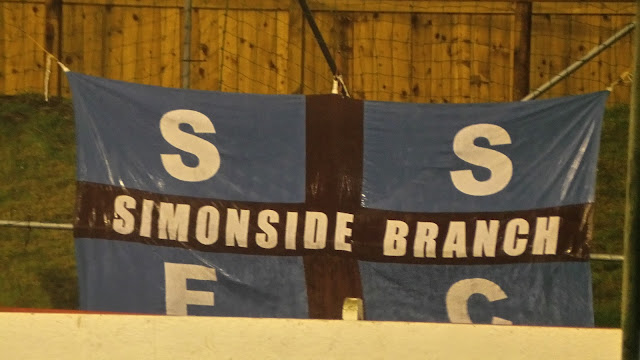 As it turned out, Stokesley was the better backup journey time-wise and I might well have needed it as a late downpour at Shildon put the game in doubt. I waited and waited for the result of the inspection and after assuming it was bad news, put Stokesley in the sat nav. Just as I started the engine, a tweet came through that the referee had said game on. Despite my extreme scepticism I switched the engine off and decided to stay. There was only 40 minutes to go until kick-off, so I went to a chip shop outside the ground and got curry sauce and chips for £2. I then paid £6 to get in, plus £2 for what was a very good programme. I went to the bar to keep warm, having a pint of Strongbow Dark Fruits for £2.50. There was heavy rain, just before kick-off but thankfully the referee held firm and played the game. I got a seat at the back of the stand and enjoyed the pork and stuffing roll and Bovril that I had purchased from the tea bar. 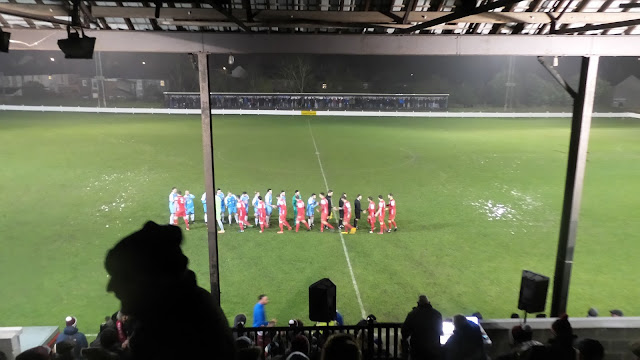 Visitors South Shields named former Sunderland player Julio Arca and ex Gateshead striker Jon Shaw in their line up. Shildon were the stronger team at the start and they took the lead after 5 minutes when Michael Rae got away from the static visiting defence and finished past the keeper. The game turned on 13 minutes when the hosts' defender Jamie Harwood was sent off for bringing down the last man. Carl Finnigan netted the resulting penalty to square things up for South Shields. South Shields went ahead on 52 minutes. A cross was put in, it was headed back across goal and debutant Jordan Blinco was there to slot home from six yards. Blinco got his second on 76 minutes when his low drive into the bottom corner of the net made it 3-1. Seven minutes before full-time, they made the game safe when a looping cross was headed home by Carl Finnigan headed home a looping cross for his second of the night. It had been a great contest, with many chances. Incredibly, it was South Shields 25th consecutive win, and yet they are still only second in the league. Hats off to referee Mr Fitzpatrick for getting the game played, when most would have called it off, despite the pitch being playable, if not perfect. 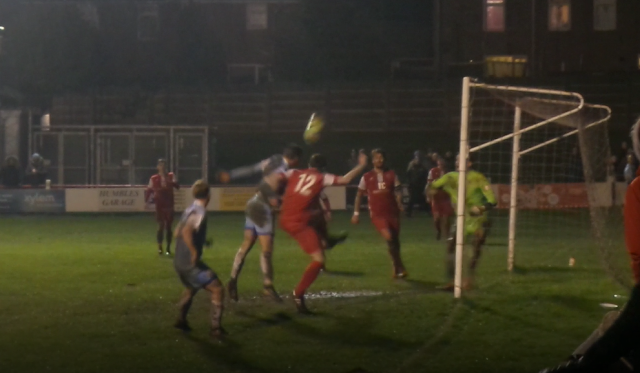 I made my way back to my guest house, getting there at 9.45. I grabbed my bag and walked the ten minutes into town. After stopping at a cash machine, I headed to the Old Victoria pub near the train station where I had a pint of Cock Bird cider. It was a new one for me, a bit too sweet for my liking, but the pub was great with a good range of drinks. I then headed to the Tanners Hall Wetherspoons where I had a pint of Westons Old Rosie. By now it was getting on for 11, so I decided to walk the 15 minutes back to my room to watch the England highlights. It turned out to be a decent performance, despite the Three Lions losing 1-0 to Germany, with plenty of positives to come out of this friendly. I watched Youtube for a while before going to bed around half past midnight. 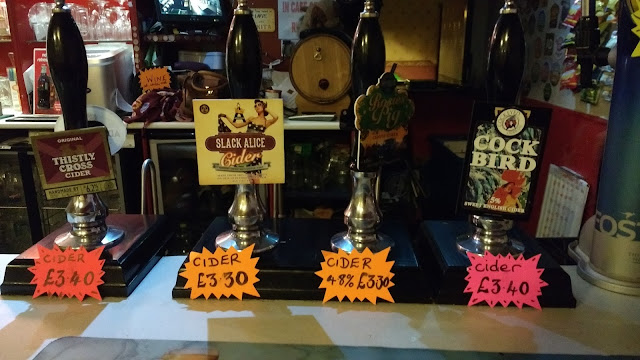 DEAN STREET is a great ground for step 5. The main stand is of an interesting design, is elevated above pitch level. Overall it holds around 500 and has good views and great legroom despite supporting pillars. Opposite is a covered terrace that holds around 500 and runs for a good length of the pitch. The rest of the 4,700 capacity ground is made up of open terracing.

There are lots of takeaways near the ground, including a chip shop right near the turnstiles. The tea bar inside the ground is decent, doing amongst other things, a hot pork and stuffing roll with apple sauce for £3. This was of a decent size for the price paid and very tasty. Also available are various burgers and hot drinks. The clubhouse is decent, though a little small and this does Strongbow Dark Fruits for £2.50 a pint with a decent range of other options. The club shop offers a decent range of merchandise, as well as a large selection of old programmes and books. 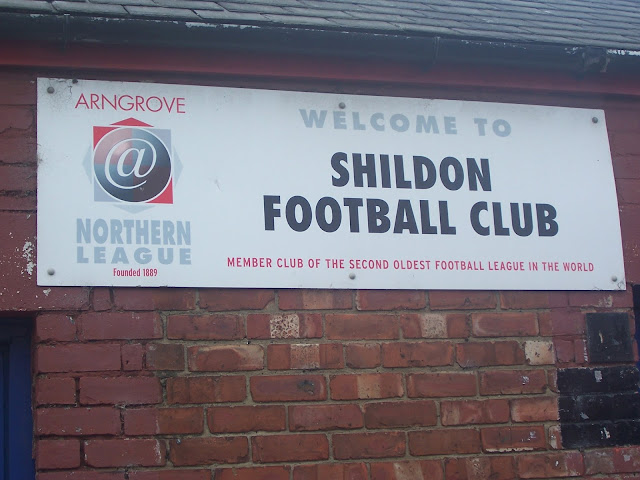 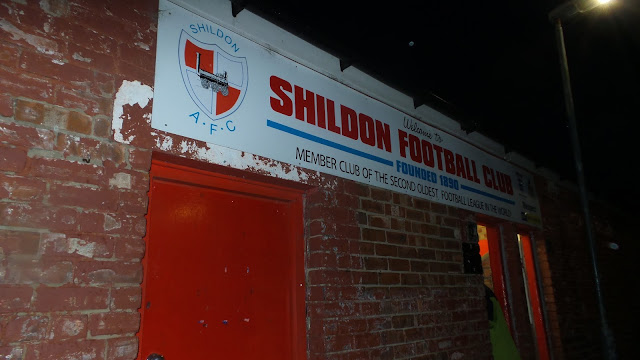 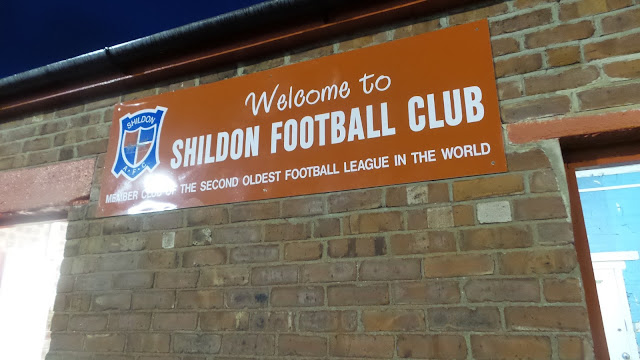 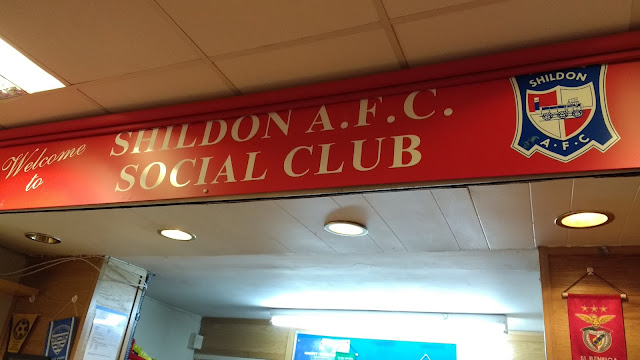 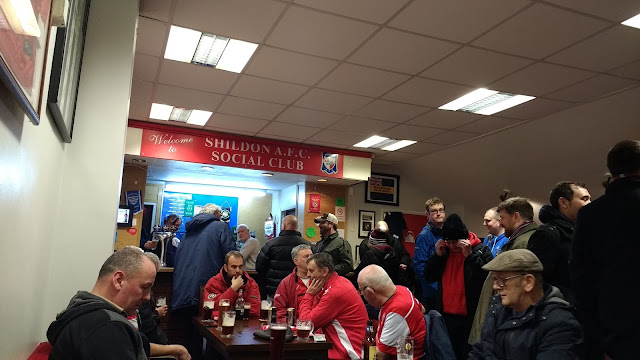 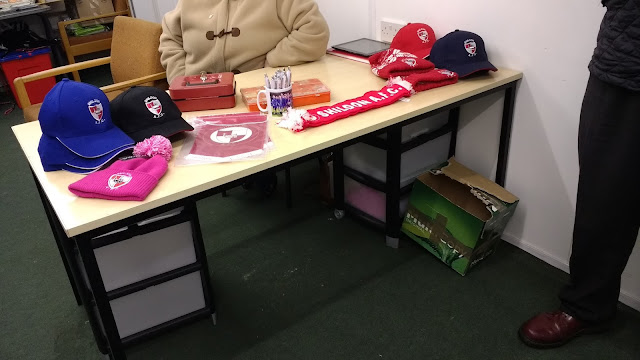 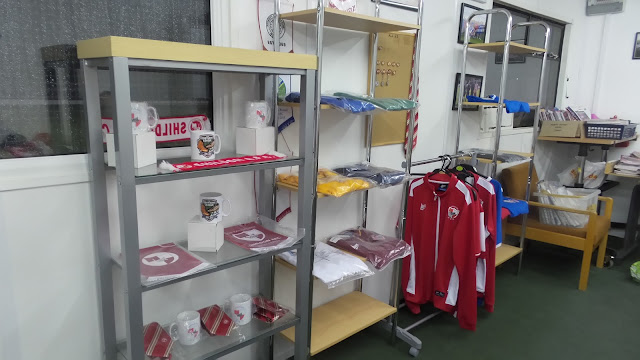 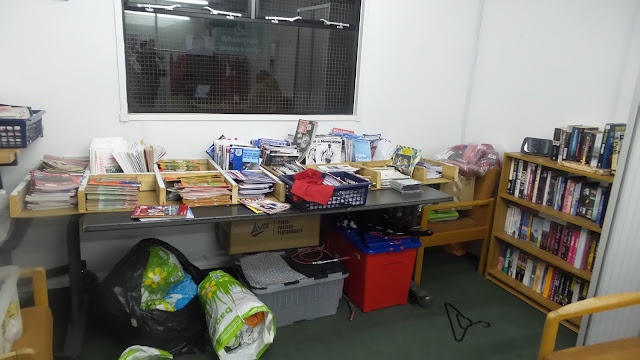 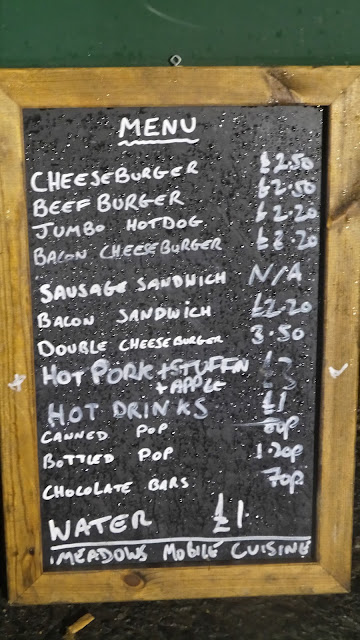 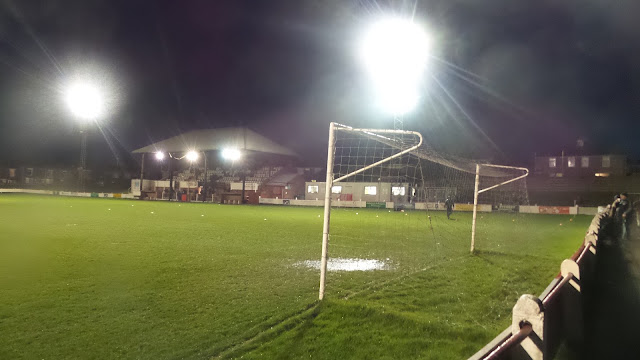 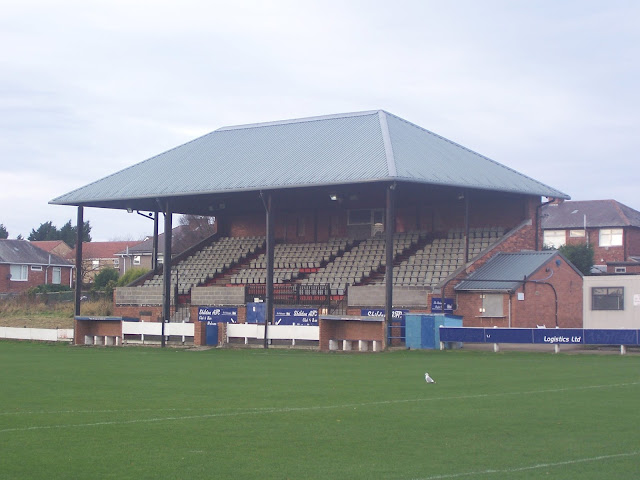 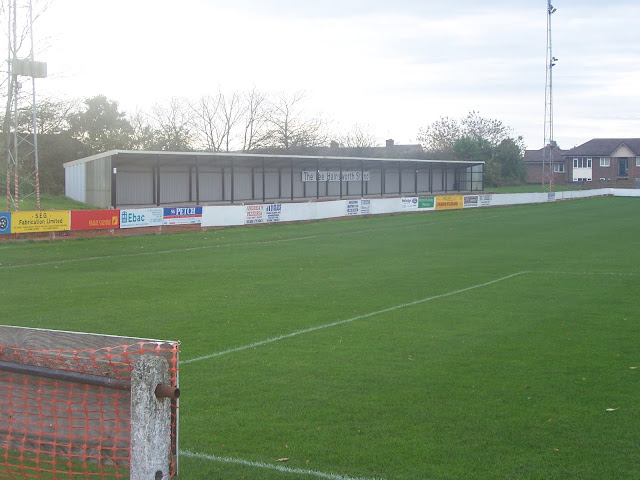 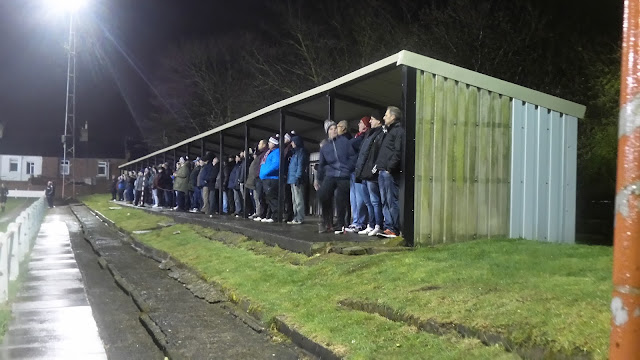 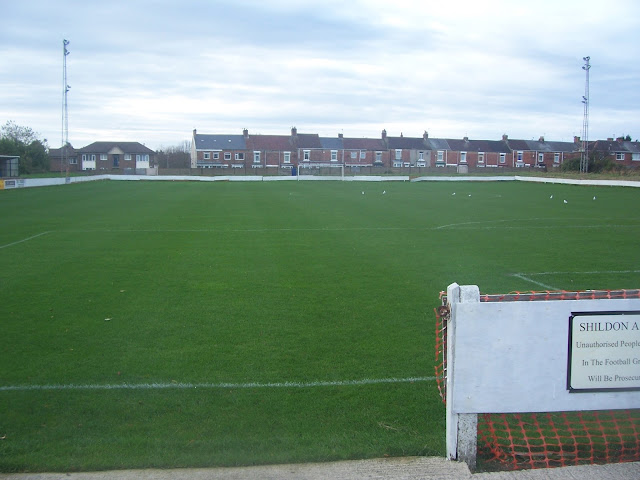 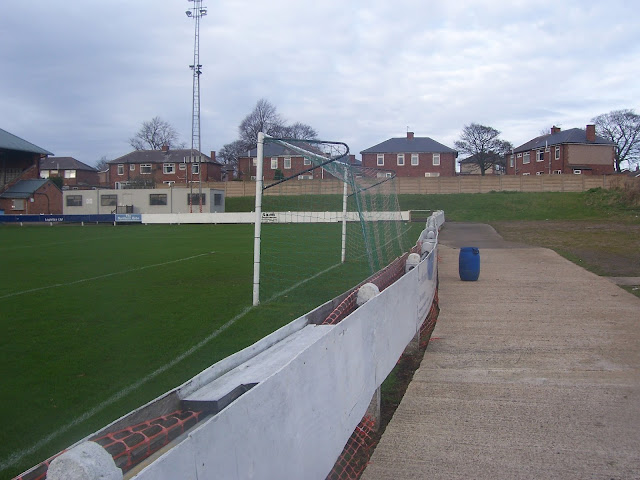