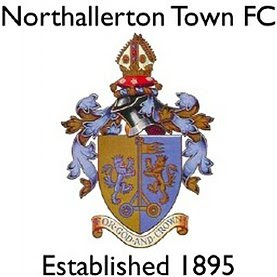 Northallerton Twon were founded in 1895. They played in local leagues up until 1982 when they joined the Northern League, just as the non-league pyramid was being established. They had to raise £150,000 to make the ground improvments needed. They struggled at first, with bottom-half finishes the order of the day but by 1989/90 they had improved enough to finish as runners-up behind champions Murton. This entitled them to make the step up to the Northern League's higher tier, having started out in Division 2. It was during this first spell in Division 1 that they enjoyed their best-ever finish of 6th in the 1993/94 season. They've flitted between the two leagues since and have been in Division 2 since 2009/10. They've finished in the top half of the table every single season, though without really troubling the three promotion places. This season they having an average season, sitting in 11th at the time of my visit.

In the FA Cup the best ever progress has been to the 4th Qualifying Round, losing 3-1 to Accrington Stanley during the 1992/93 season and 2-1 to Witton Albion the following season. The 1992/93 season also saw a great run to the FA Trophy 3rd Round where they lost to Conference side Farnborough Town. The 2002/03 season saw the best run in the FA Vase, with them reaching the 4th Round before a 3-0 defeat to Burgess Hill Town. Locally, Northallerton Town won the Ernest Armstrong Memorial Cup, defeating Team Northumbria 3-2 in 2012 and Ryhope CW in 2016. Notable people to come from Northallerton include footballer Michael Dawson and Oxford hospital founder John Radcliffe. 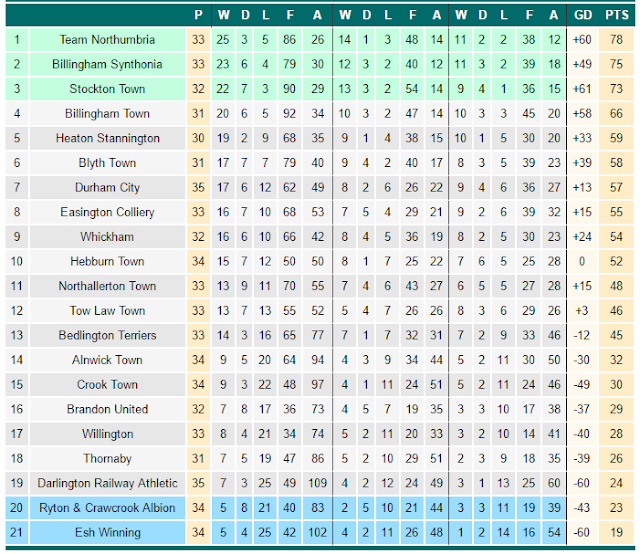 Initially, I thought I'd be without a game on the first day of my jaunt up to the north-east but then the Football Traveller threw up a groundhopping opportunity. Though it's not as extensive as I'd like, with quite a lot of youth and reserve games not covered, it is the most comprehensive list of games available and it made for a decent choice for a birthday present from my parents. It had thrown up a couple of interesting games that had not been listed elsewhere and this issue was no exception, throwing up a game at Northallerton Town, The Wensleydale Creamery Medals Shield Final was being contested between Catterick Garrison Football Centre and Richmond Mavericks and with my parents staying in Hartlepool, they kindly agreed to drop me partway up. I'd looked at accommodation in Northallerton which was in short supply and pricey, so I booked somewhere in nearby Thirsk from where I could get a train. The night before I'd been up till 5 am listening to the radio and typing my blog. Even so, when I woke at 9 am, I felt pretty refreshed. 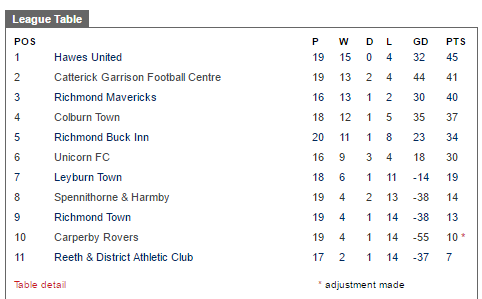 After some toast for breakfast, I had a bath and got dressed. After getting my stuff together, we left at 10.30. The journey went fine up until the A43 where there was 20 minutes delay due to roadworks. There was the double annoyance of my Dad putting his Bananarama CD on and his dodgy taste in music prompted me to put my earphones in and catch up on my podcasts. At least the journey gave me a chance to do some research for tonight's game. Both sides were in Division 1 of the Wensleydale Creamery League. Catterick Garrison were second in the league and were fresh from an 8-0 win against basement side Reath & District Athletic Club. They'd got this far by beating 2015 winners Hawes United and Reath & District. Richmond Mavericks were a place lower in third, having beaten local rivals Richmond Buck Inn 1-0 on Saturday. They'd got this far by beating Richmond Buck Inn, Spennithorn & Harmby and Unicorn, having started a round earlier than their opponents. There was a complete lack of enthusiasm for the game on hosts Northallerton Town's website or Twitter feed, with no mention of tonight's game. The usually reliable FA Full Time website still had it listed, however, and so I was reassured that the game was still on. The journey up was punctuated by the disappointing news that fellow groundhopper Chris would not be available for our planned jaunt to Knypersley Victoria next Monday due to work commitments. This would mean yet another re-jig of the games on my week off as I sought to see as many games as possible. That said, with fellow hopper Anwar also away, I'd probably be keeping it local. We stopped at KFC for lunch, with me trying the Dirty Louisiana burger meal which was pretty decent. I managed to research club history for both of my upcoming blogs which helped kill the time for the rest of the journey. I got to my accommodation, the Linden Tree near Thirsk at 3 pm. It was really nice, with its own kitchen and right near the train station. I let my phone charge and watched Whatever Happened To The Likely Lads before leaving at 4. Although the station was just around the corner, the town was over a mile away. I had plenty of time to spare anyway, so decided to take the walk. I was there at 4.35, though disappointingly there was no real cider on after all that trek. Instead, I had a bottle of Hazy Hog cider which was nice before walking back to the station. Due to confusion on Google over the train times, I just missed the hourly train and so had to go back to my room for a while. It was annoying as I'd probably have to either go straight to the ground or get a taxi from the pub as it was in the opposite direction. 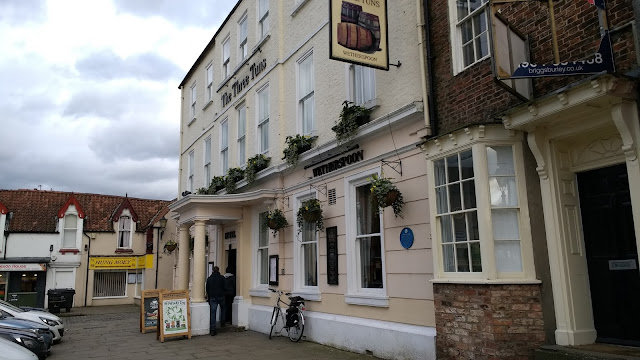 In the end, I did get my train at 6.40 with me getting to Northallerton 10 minutes later. I decided to go straight to the ground, arriving at 7.10. I was pleasantly surprised to see the admission was £2 which was a real bonus with me not finding a cash machine on my walk. I headed straight for the bar. I bought myself a pint of Strongbow for £3,40 as well as some funny coloured, but very tasty chips for £1.60. I went outside and met my mate Dan who I have known for years on social media, but never actually met, We had a brief chat, though the guy he was with, a York fan who looked a bit like the comedian Dave Spikey said that he hated Wycombe when I told him I was up for the Hartlepool v Wycombe game on Saturday. For the game, I stood with fellow hopper Paul, who I'd met before, recognised his face, but couldn't remember his name. It took me until full time to sheepishly ask his name. 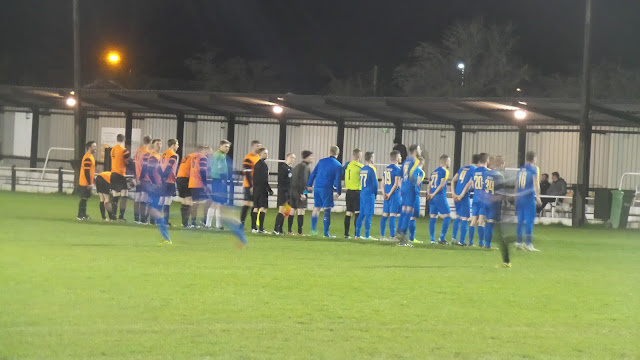 On the pitch, Richmond Mavericks were well on top, which disappointed me as I wanted Catterick Garrison to win for Dan. The Mavericks took the lead just before half time with a close-range finish by Craig Lovell. The game looked to be over, when still dominant, they scored a second on 50 minutes with a lovely dipping shot by Adam Emson that went in the top right-hand corner. However, a couple of minutes later, Catterick were back in it with a scrappy goal when a loose ball was put home from 6 yards by James Boyle. This seemed to fire them into action and they had a purple patch, getting really on top of the game. They equalised on the hour with the goal of the night - a piledriver into the top right-hand corner from Liam Walker. As much as I was pleased for my pal, the equaliser was not what I wanted, with me keen to get down to the pub that I had missed out on earlier. Catterick were well on top for a long period, and I was imploring them, or anyone to score to save extra time. Just as it looked as if I was going to be staying for another half hour, Richmond Mavericks popped up with the winner on 86 minutes. A huge goal kick was picked up by Owen Kelly and he flicked beyond the onrushing keeper to win the cup for his team. 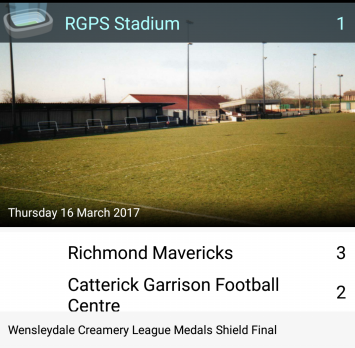 No equaliser came in the dying moments as the game was killed off. We stayed behind to watch the medal presentations before heading off. Paul had kindly agreed to give me a lift to my intended pub. The Stumble Inn was excellent, but bodily capacity restricted me to halves of Very Perry and Abrahalls Still Dry, as well as a pint of Farmer Jim's Medium. I think I pretty much ticked the board of the 20 on offer, as I'd had most before. Time was not on my side, however, with the last train to Thirsk leaving at 10.30. It was not easy running with a belly full of cider, but I made my train with just under 10 minutes to spare. It was prompt and on time and I was back near my hotel ten minutes later. I was going to walk down to Tesco to get something for breakfast, but couldn't be bothered with the 2.5 miles round walk. Instead, I went back to my room and had some Irn Bru while watching Bullseye and typing my blog. It was well into the small hours before I got to sleep, but I'd enjoyed my day, even if everything had not gone perfectly to plan. 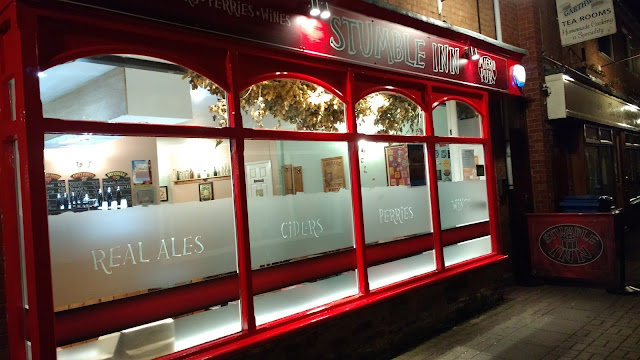 THE CALVERT STADIUM is a great facility for this level and could probably function as a step 3 venue. One side is almost completely covered, with around 400 standing spaces and 200 seats. There is a decent amount of terracing behind both goals as well whilst the 4th side is currently out of bounds to the public.  The bar is smart and has Sky TV and real ales, though cider drinkers are restricted to Strongbow on draught. The tea bar is also decent, with a wide range of hot food. 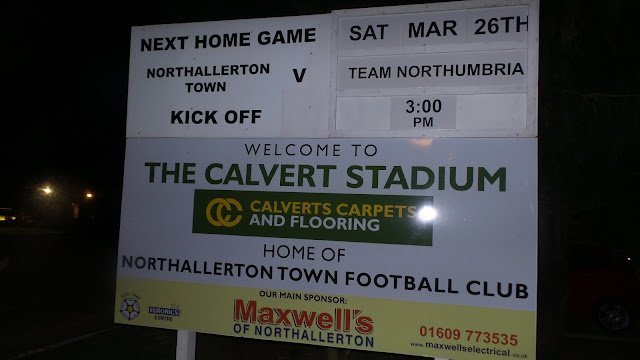 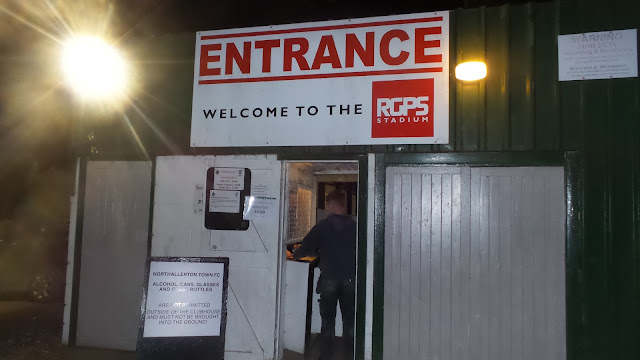 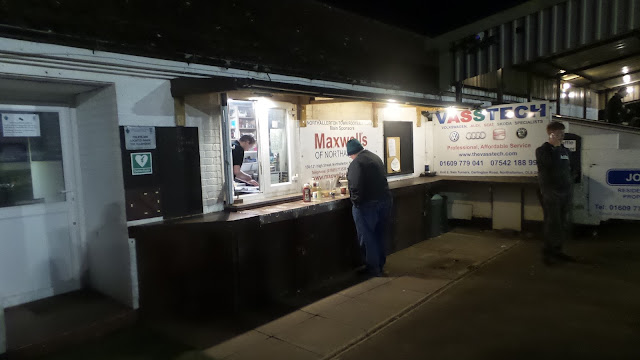 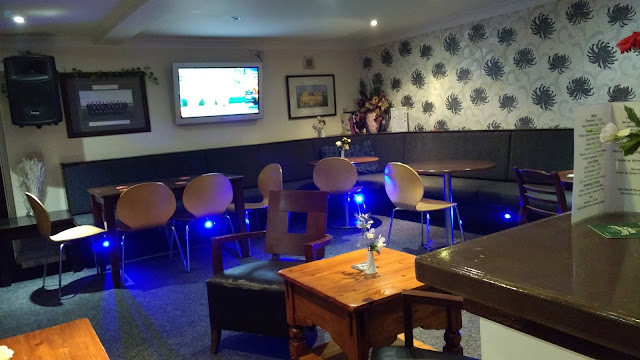 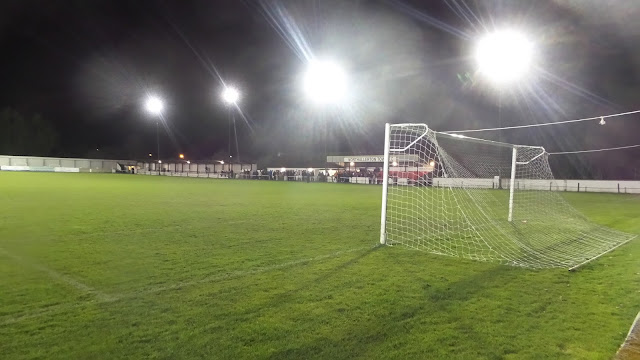 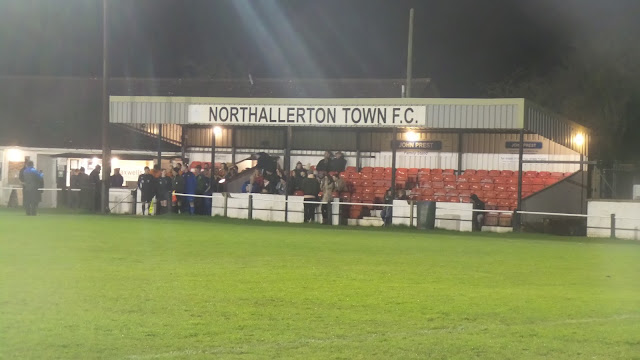 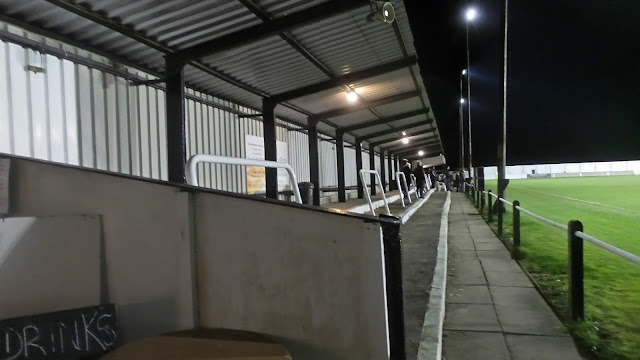 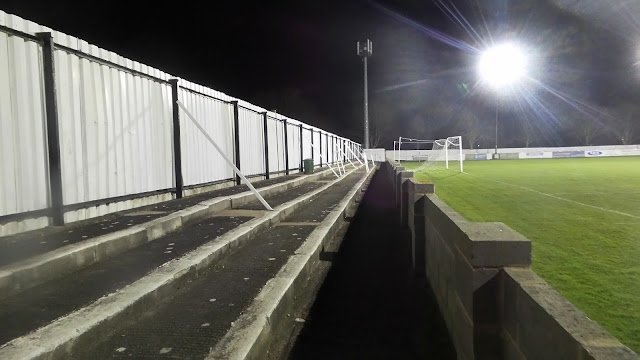 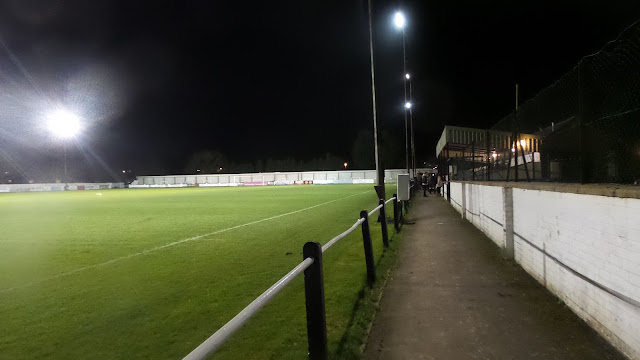 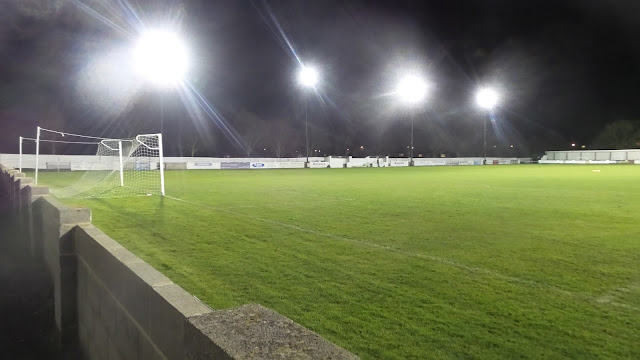 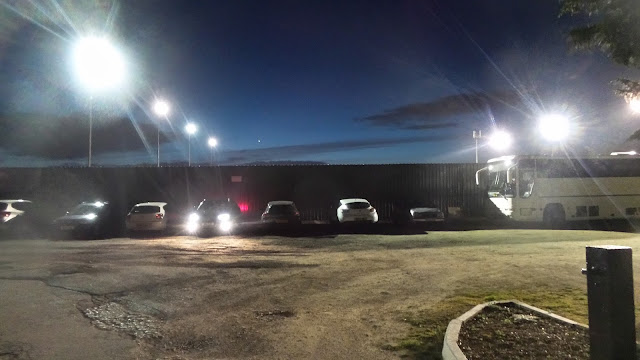