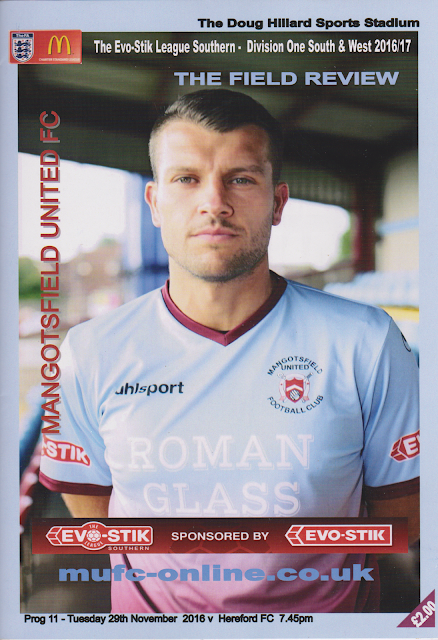 Mangotsfield United were formed in 1951, though there was a former club in the town that folded the previous year after long-running financial difficulties. Starting out in the Bristol & District Combination, they became one of the leading teams in the area and this led to them joining the Western League in 1972. A hugely credible 3rd placed finish was achieved in their first season and their first four seasons all resulted in top half finishes. The introduction of a second tier to the Western League saw results deteriorate and in 1982 they were relegated to the 1st Division. Mangotsfield would bounce back straight away, gaining promotion as runners-up to Bristol Manor Farm. The season away did them good, and upon their return they would never come close to relegation again, following in a top-half spot more often than not. The club were Western League champions in 1991, though it wasn't until the turn of the century that they would win promotion, finishing as runners-up to Taunton Town, going up to the Southern League for the following season. Starting out in the second-tier Western Division they won promotion to the Premier Division in 2005. 2006/07 saw Mangotsfield finish in their highest ever placing of 9th in the Southern Premier but they were relegated after finishing bottom in 2009. Despite a 3rd place finish in 2010/11 they lost in the playoffs to Frome Town and have finished in the bottom half in every season since. This season has seen huge improvement and the club have cemented a place in the playoffs, which would represent a challenge for tonight's visitors Hereford, who were running away at the top of the league.

In the FA Cup Mangotsfield United have never reached the 'proper' rounds of the FA Cup, although they have come very close on a number of occasions. 4th Qualifying Round defeats to Gravesend & Northfleet in 2000, Lewes in 2002 (after a replay) and Forest Green Rovers in 2009 being as close as they have come. The 1995/96 season saw a run to the FA Vase Semi Finals. After beating Truro City, Godalming & Guildford, Hungerford Town, Paulton Town, Wivenhoe Town and Raunds Town, they faced then North West Counties side Clitheroe in a two-legged semi-final. Despite winning 1-0 in the home leg, they lost 2-0 up in Lancashire to end their dreams of a trip to Wembley. The 2001/02 season saw their best-ever run in the FA Trophy as they lost 1-0 in the 4th Round at home to Stalybridge Celtic.

In terms of local success, Mangotsfield won the Western League Cup in 1974, the Somerset Premier Cup in 1998, the Gloucestershire Senior Cup in 2003 and 2013 as well as the Gloucestershire Senior Trophy on multiple occasions. The club's record attendance came in 1974 when 1,253 fans turned out for an FA Cup 1st Qualifying Round game against Bath City. Their record home victory came in 1953 when they defeated Hanham Sports 17-0, so away from home they beat Dawlish Town 13-0 some 40 years later. A number of notable players were produced by Mangotsfield United including Gary Penrice, Gary Megson and Mike Hooper. 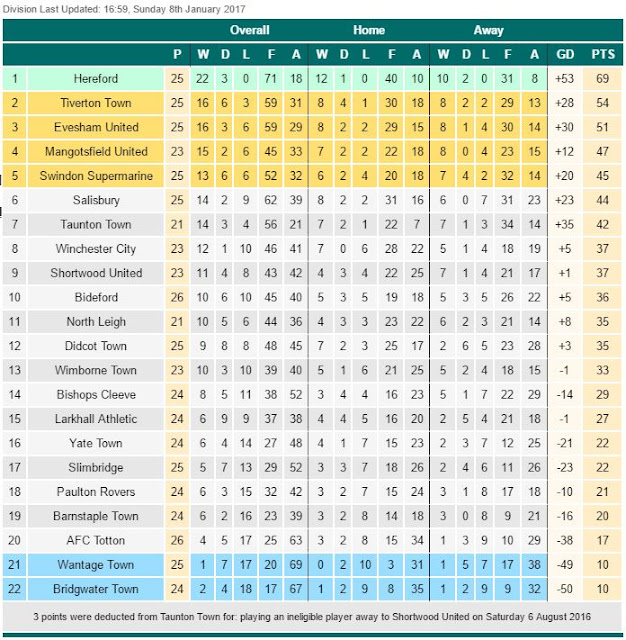 The weekend before, I'd seen Wycombe scrape past Stourbridge in the FA Cup. It was a great game, but to be honest, we rode our luck and the NPL Premier side were fantastic and unlucky not to get anything out of the game. We've had pretty rotten luck in the FA Cup draws so far this season, but we pulled out a good one on Monday night, getting Spurs away. Middlesbrough away would have been my first choice, but this will represent a great day out in London and a good deal financially for the club. I'm hoping it gets moved to the Sunday for TV as I have the weekend booked off and fancy making the most of the weekend. On the day of the game, it was my day off work, and I walked down town as per usual. When I came back I was browsing through Twitter and noticed that my original intended game in Cinderford Town v Slough Town was subject to a pitch inspection. I had that sinking feeling that I've had when trying to visit Cinderford many times before. My fears were founded when it was called off at 1PM, and my mission to complete the Southern Premier would have to wait once again. 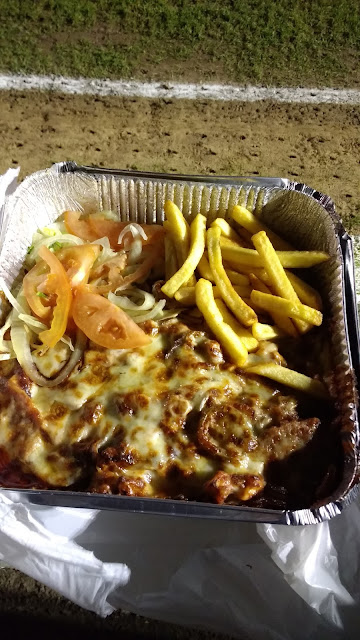 At least I had backups in place, nine possibilities in total. Fellow hopper Anwar's choice was Mangotsfield United v Hereford and so the decision was pretty easy to make as there were no other standout games on my list. We'd tried to visit on the day of the original tie, but it suffered a frozen pitch and a subsequent call off, something that I anticipated early and ended up paying a very cold revisit to Banstead Athletic instead, with my original choice being called off less than an hour before kick-off.  It would mean me spending the afternoon doing my pre-match research so I could get an idea of what to expect when I got there. After doing that it was pretty much time to go, so I made up my flask, got my things togther and left at 3.30. I picked Anwar up at 4 and apart from a 10 minute delay near Abingdon due to a crash, it was a good journey. For dinner, we went to the Star Kebab House a mile and a half from the ground where I had a chicken and bacon burrito with chips for £6.80. As it was less than an hour until kick-off I didn't eat it straight away and drove the 1.5 miles to the ground as I thought it might be busy. I was correct in my assumption, and I had to explore a couple of side roads before I finally found a space. From there it was a few minutes walk to the ground, with me getting there at 7 PM. 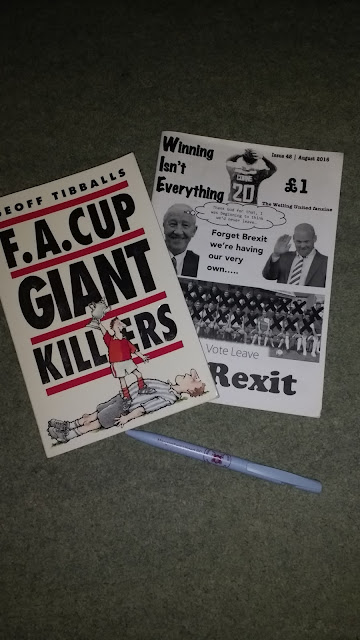 After paying £8 to get in, plus £2 for what turned out to be a decent programme with plenty of interesting articles in it, I settled down to my dinner. It had felt pretty heavy when I took it away and it turned out to be huge.I struggled to finish it and the combination of chicken, bacon, cheese, green peppers, onions, jalapenos and salsa sauce was delicious, though the chips were cold by the time I got round to eating it. After that I went in the club shop which turned out to be one of the better ones at this level. There I bought a FA Cup Giantkillers book, a Welling fanzine and a Mangotsfield United pen, all for the princely sum of £2.While I was there I picked up a free teamsheet before I made my way to a space on the far side to watch the game. I met a number of people that I knew during the game - fellow hopper John and Bristol Rovers fan Kalon who I'd seen earlier this season at Bath.But the most surprising person I saw was my old teacher from school, called Mr Stedman. I'd not seen him for 20 years and it was good to have a brief catch up, especially as he was one of my favourite teacher, with him being as keen on football as I was. 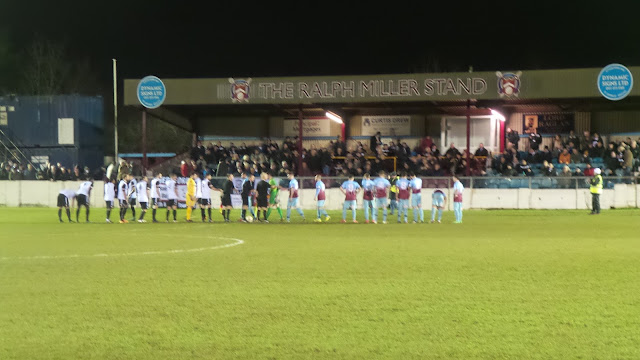 In front of a crowd of 602, Hereford extended their 15-point lead at the top of the league and although they had the better of the game, the hosts did have their chances. The visitors started on the front foot and in the first minute former Bristol City and Bristol Rovers keeper Steve Phillips had to be at his best to deny the Bulls top scorer John Mills. They eventually did take the lead on 23 minutes, though there was a degree of controversy about it. A free-kick was awarded on the edge of the area, which was awarded for a trip. Mike McGrath quickly took it and it caught Phillips by surprise, who claimed he was not ready. Despite his protests, the goal stood and Hereford went on to win the game 1-0, despite further chances for both sides. The goal was caught on camera by a Hereford fan and is included below. Talking of their fans, they were pretty quiet in the first half, but in the second half they got going and really got behind their team with some decent songs.

During the game, I'd been keeping an eye on the Wycombe game up at Blackpool. Though the Checkatrade Trophy is a bum competition, the £40,000 prize would come in useful. On a more personal level, it meant that the league game at Exeter would be moved from the 24th January if we progressed, which suited me down to the ground. I really fancied visiting Exeter again, but a trip on a bleak January evening did not appeal. Happily, Wycombe did win, though it went all the way to penalties. A side bonus of the win was that Blackpool's unpleasant and controversial owners would not be pocketing the prize money. It was around 9.45 by the time we headed for home, and with a good journey home, I dropped Anwar off at 11.25, arriving home myself 20-minutes later. I watched TV for a while, before going to bed just before 1 AM. 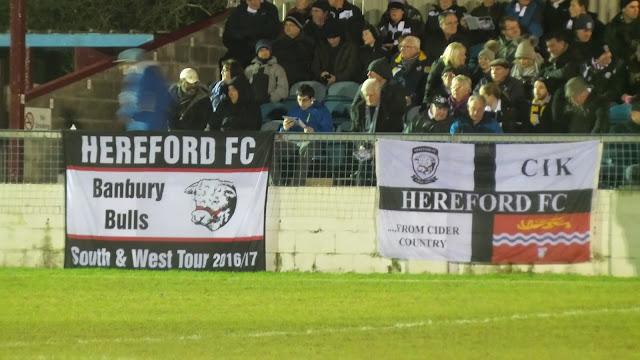 THE DOUG HILLARD SPORTS STADIUM is a great ground for the level Mangotsfield play at, with cover on all 4 sides. The total capacity stands at 2500, with around 1000 of that being covered standing. There is a decent sized main stand, which holds around 200. The club shop at the ground is excellent, having a great range of merchandise and old programmes and books too. The bar at the ground is also pretty decent, with live TV sports and lots of stuff from various football clubs on the walls. For cider drinkers the choice is pretty good with Natch on draught and Thatchers Gold, Thatchers Haze and Blackthorn Dry in cans.

I didn't eat at the ground, though there are a couple of takeaways around ten minutes walk from the ground. I opted for one further away from the ground, the Star Kebab and Pizza House in nearby Kingswood. This was pretty decent and summed up the whole trip which was an enjoyable night out at a friendly club. A couple of pictures were from an early motning visit in 2007, when I popped down on my way to a Plymouth Argyle v Wycombe Wanderers game to take pictures. 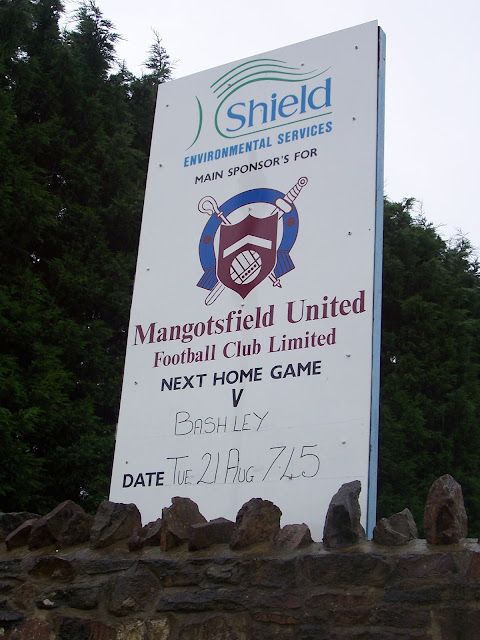 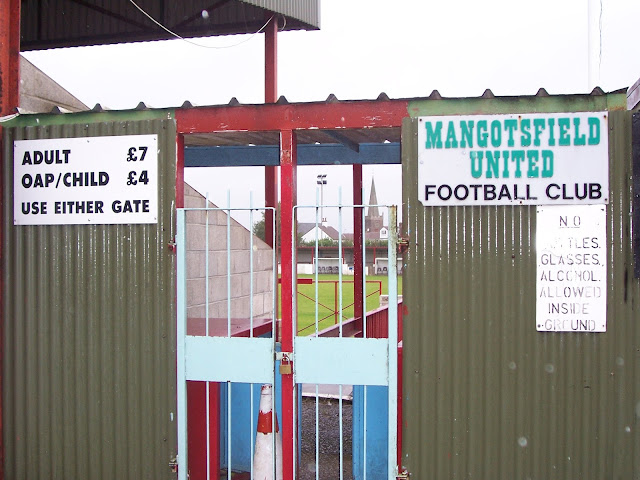 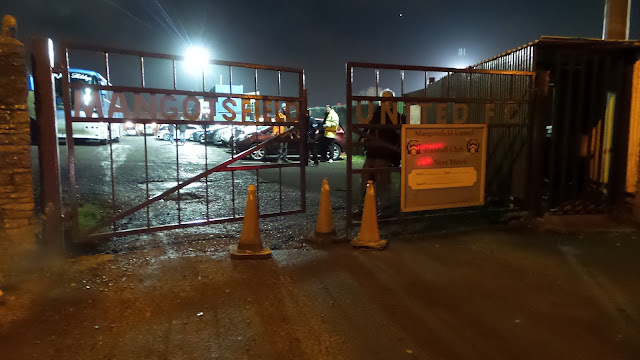 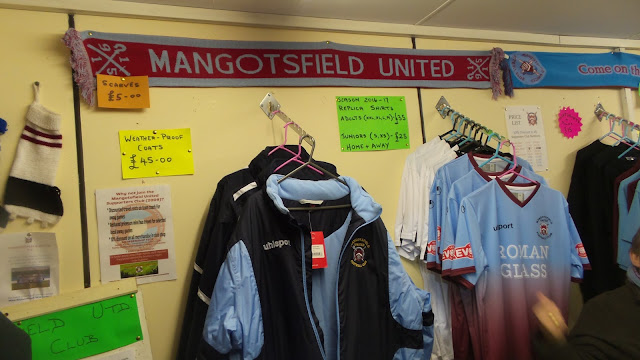 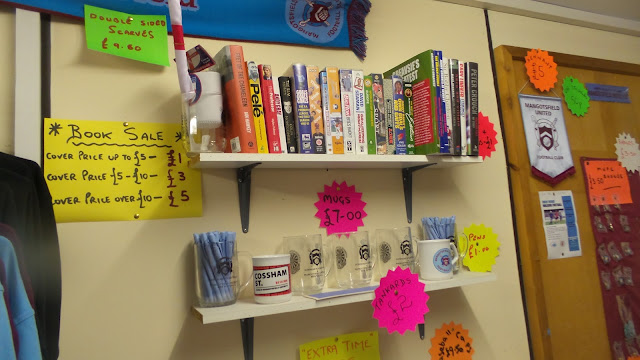 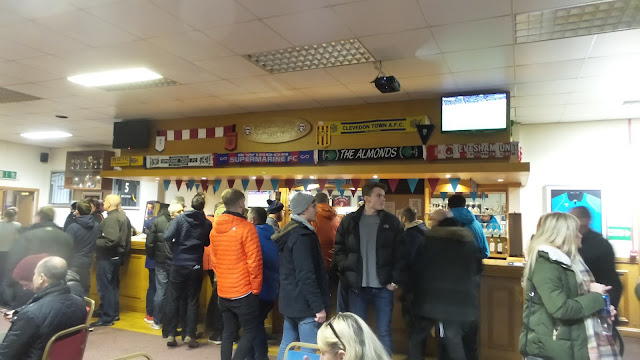 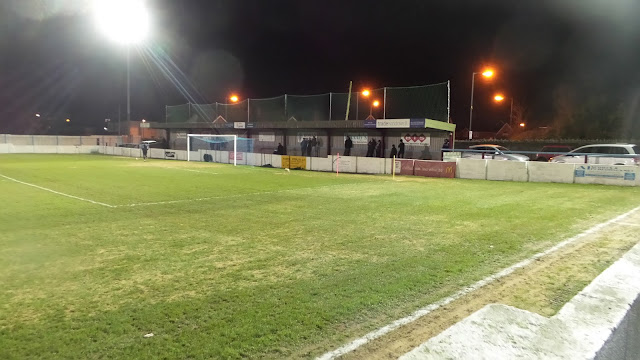 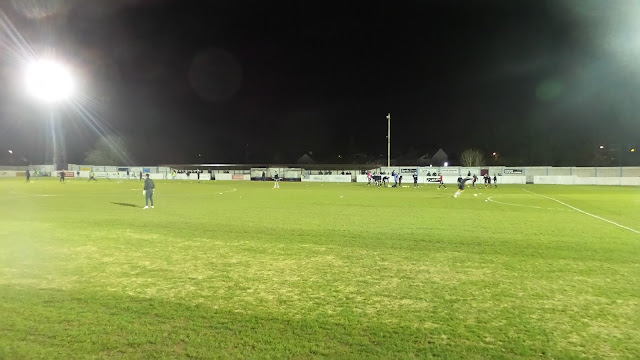 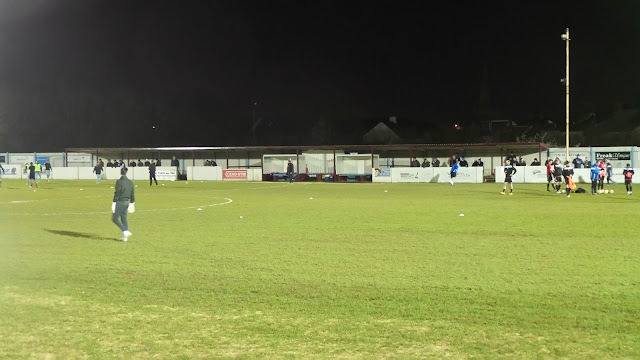 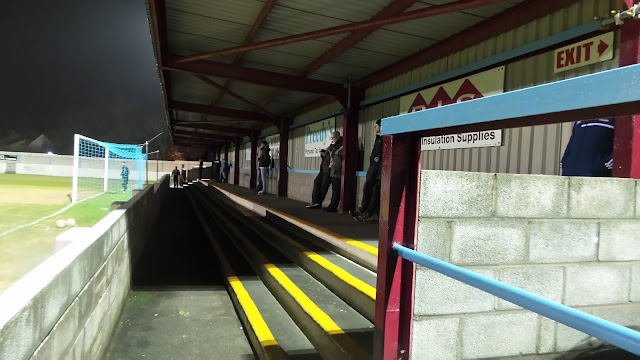 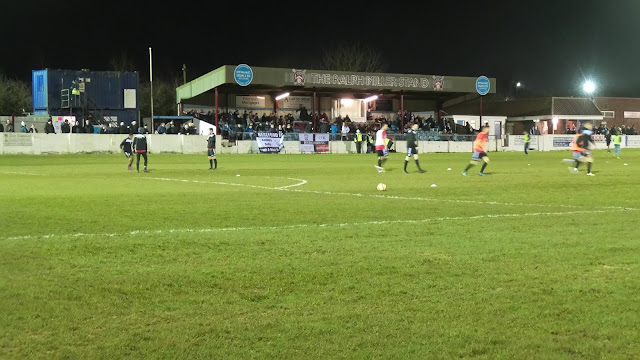 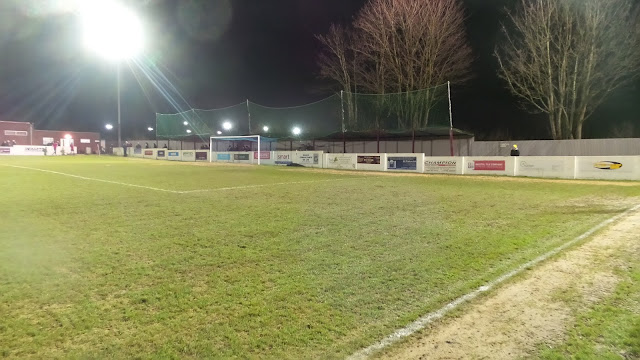 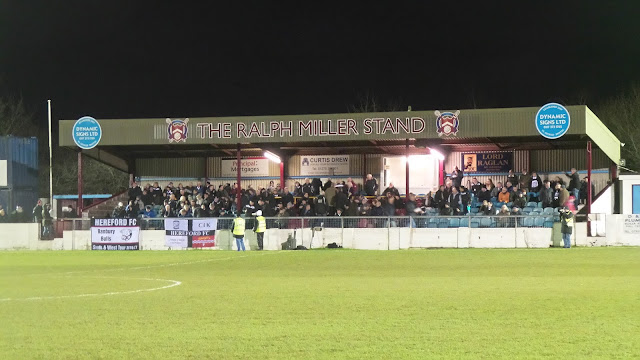 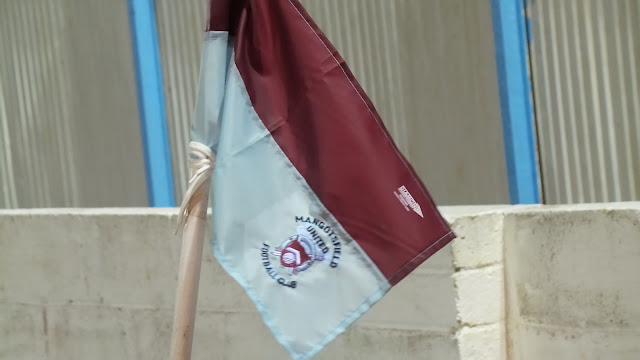