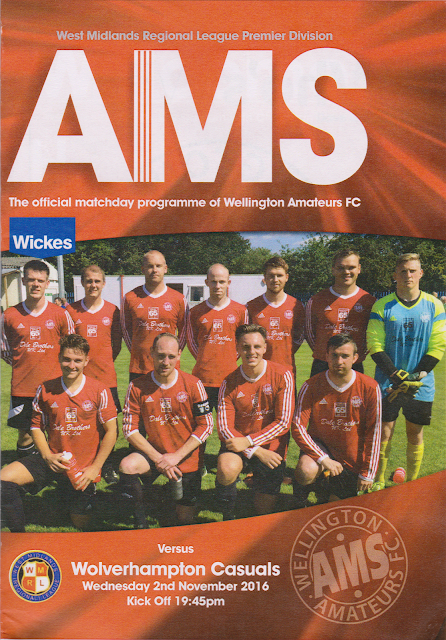 The club was formed in 1950 as OLD WELLINGTONIANS by former pupils of a local grammar school, changing their name when players that were not former pupils. They played in the Wellington League for the first 31 years of their history, before joining the Shropshire League in 1981. Starting in its second tier, they won the league and cup double in their first season, earning promotion to the Premier Division in the process. The success continued and they won the championship in their first season. Though they won it again in 1989, but it wasn't until 2006 when they were runners-up that they made the step up to the West Midlands Regional League. It was an immediate success story, with them starting in Division 2 and winning the league in the first season. Despite top 2 finishes in Division 1 for the next 4 seasons, it wasn't until 2012 that they made the step up to the Premier Division due to their ground not being up to standard. Since then they remained here, sitting at step 6 of the non-league pyramid. Their best ever finish came in their debut season od 2012/13 when they ended the season in 12th place.

Wellington Amateurs have not yet entered the FA Cup, and have only entered the FA Vase twice. The only win in the latter came this season when they hammered Dudley Town 4-0 before a defeat to Uttoxeter Town in the 2nd Qualifying Round.Locally a host of cups have been won including the WMRL D1 Cup, the Shropshire League Cup, the WJ Evans League Cup, the Shrewsbury Town Directors Cup, the Commander Ethelstone Cup and the Wellington Senior Cup.

I woke around 7.30am on the day of the game, having had a decent night's sleep. I was disappointed to hear that my afternoon game at Halifax, or to be more accurate, the West Riding FA ground had been called off due to the hosts involvement in the FA Youth Cup in the evening. After yesterday's bore draw at Pontefract and the lack of programmes I was beginning to think this trip was cursed. I set about finding a replacement and narrowed it down to a couple of options, namely Radcliffe Borough and Kidsgrove Athletic. The latter won out for 2 reasons - firstly I'd missed part of a 7-4 epic at the ground due to confusion after kick off time for another afternoon game. Secondly I fancied some Staffordshire Oatcakes, and I knew that I should be able to get them in the town. It also decided my evening game from a very limited choice, and that would be at Wellington Amateurs who were hosting Wolverhampton Casuals. I'd not been inspired by any of the games on offer, so I was kind of pleased that my hand had been forced and a game chosen for me. 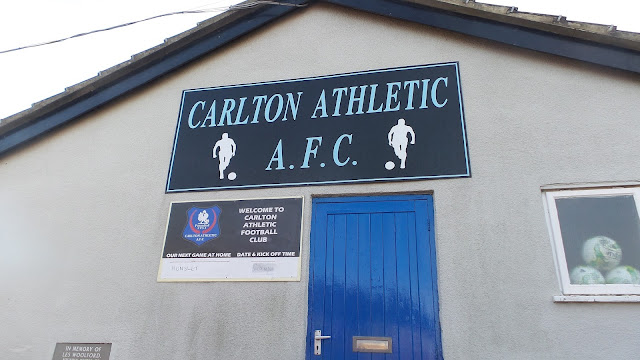 After a nice breakfast I went back to my room where I confirmed my plans for the day and sent a tweet out, tagging both the clubs and the league so hopefully any late changes would be communicated to me. I left about 9.30, leaving plenty of time as I knew the M6 could be problematic. At least I'd have my favourite Podcast from the Two Mikes to keep me company as it was available nice and early for once. I had plenty of time to kill so I decided to look at some football grounds along the way. First up was Carlton Athletic, the team of the village I was staying in. This was a basic railed off pitch but it was quite pleasant. Though I normally look for grounds with stands, I'd not be too disappointed if I had to spend a match day here. After that I made my way to what was Rochdale Town's ground, but is now only used for rugby. They were kicked out of the north-west counties league at the end of last season due to various ground grading issues, so I was surprised to see a ground that was better than some I have seen at step 3. Sadly there will be no return for them as they folded a few games into the current Manchester League season, so it's unlikely that that venue will see football again. 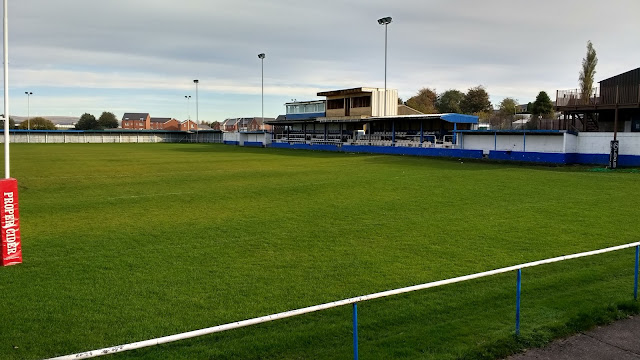 After fun and games on the M62 and M6 where roadworks delayed me 20 minutes I arrived into Kidsgrove at 12.15. I stopped in the town for a sausage and bacon oatcake, though sadly the town's Tesco was very small and didn't have any for me to take home. I then made my way to the ground, arriving at 12.40. Happily there was no issue over the kick-off time - last time out, the kick-off was put back an hour due to the manager's work commitments, I arrived half an hour late and arrived when it was 3-2. In what was a crazy contest I did see the majority of the goals, the hosts beating Warrington Town 7-4 in the end. This time there were a few less goals with Kidsgrove shooting into a 2-0 halftime lead, before Radcliffe pulled back a penalty with 20 minutes to go. Sadly there were no grounds to get pictures of en route to Wellington and so after stopping at Asda to get some petrol and oatcakes, I went and had a look around Telford. It was all a bit fancy for my liking, just one huge indoor shopping centre with rows and rows of bland chain stores. At least it gave me somewhere to catch up on Facebook in the warm, but I soon went back to the ground, with over 2 hours to go until kick-off. Oakengates, near the ground, was much more like it. Had lots of personality and some interesting pubs. I had a half in The Crown and The Old Fighting Cocks, both of which were great but that was my lot for the night as I'd be driving in 4 hours. I was hoping for a curry but they didn't have forks to take away. Instead I had a Kofte kebab with lots of salad which was decent enough. From there I made my way to the ground, paying £5 entry which included a programme. The ground was fairly basic, but very homely and pleasant. I took a place on the opposite side, near the halfway line to watch the game from.

It was nice to catch up with some hoppers from Retford that I'd not seen for a while and we had a good chat and it filled the time while we waited for the delayed kick off. The reason for starting late was that the visitors forgot their kit, and ended up having to use Wellington's away strip. The home manager was keen to keep things tight and I was dreading a 0-0 for the second night in a row. But thankfully 35 minutes in Wolverhampton Casuals took the lead. A well-worked goal and a smart flick set up the striker to make it 1-0 past the exposed keeper. The visitors continued to be well on top but with 20 minutes to go the hosts equalised. It had a real touch of quality about it too, the two 'strawberry blonde' lads on the right combining a great through ball and a decent chip over the keeper for the goal of the night. It was soon advantage Wolves Casuals again though, as straight away they went up the other end and restored their lead from close range. Wellington equalised a couple of minutes from time but just as if it looked like they may get an unlikely point the visitors went back into the lead right on full time as they poked home a rebound from within the 6-yard box.


Wolves Casuals probably deserved the win on the balance of play but Wellington Amateurs had been a good and welcoming club. The ground had plenty of character and nice touches and it had been the best game of my trip, opening up after the first goal had been scored. I had a trip home that should have taken a shade over 2 hours although with 3 road closures on the M54, M6 and M40, I had to add another 25 minutes to my journey and to be honest as annoying as that was, it was nothing to some of the horrific delays I've had in the past. I got in at 12.15, and after catching up on Facebook I watched TV in bed before going to sleep just before 2am

SCHOOL GROVE is situated in the middle of a housing estate, a;though it is situated a 10-minute walk from the small town of Oakengates. Here you will find a great range of pubs, the best of which is the Crown Inn which has a great range of drinks on offer. There are also a range of other decent pubs and a number of takeaways too. Back at the ground there is a bar and also hot drinks and snacks.

In terms of the ground itself, it is set amongst nice scenery with a grass bank on the far side. It is mainly an open affair, with 2 areas of cover. Firstly a small stand which seats around 50 under cover, whilst there is further cover on the far side for around 100. 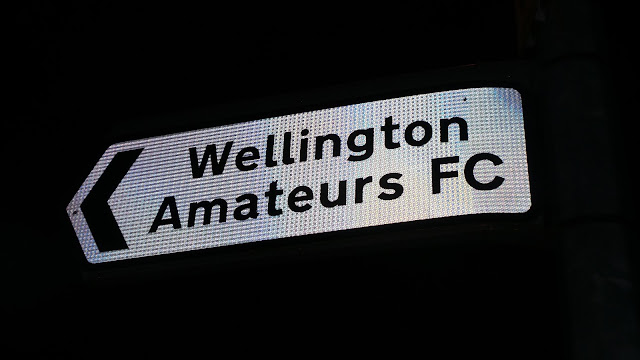 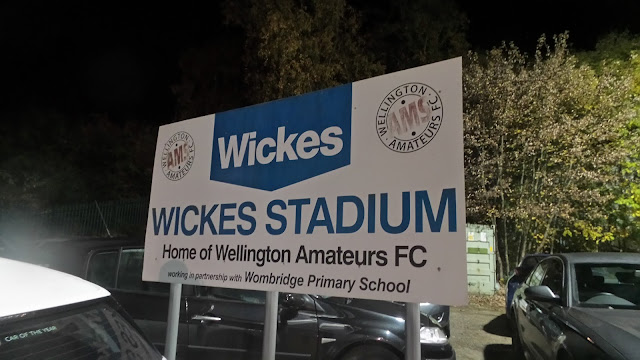 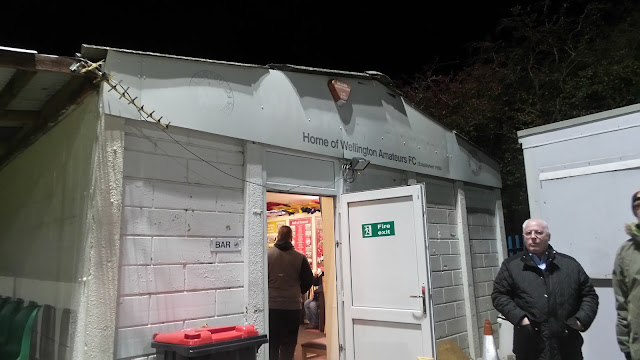 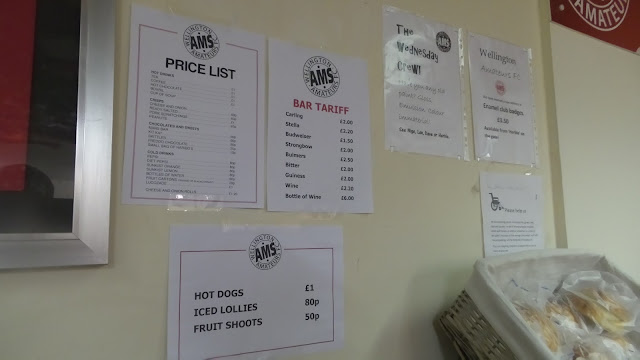 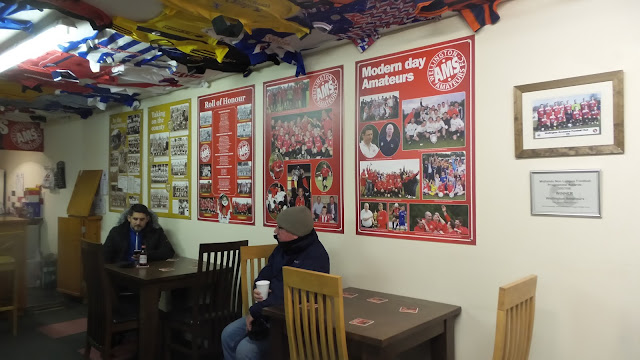 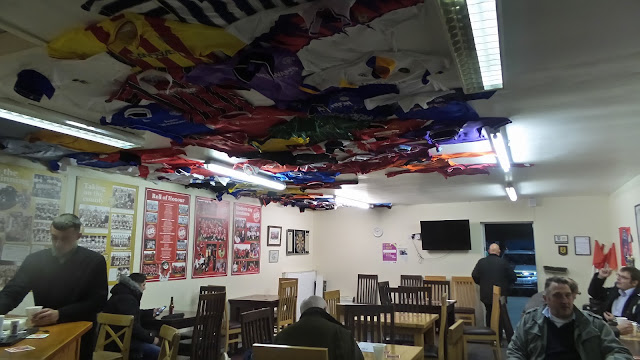 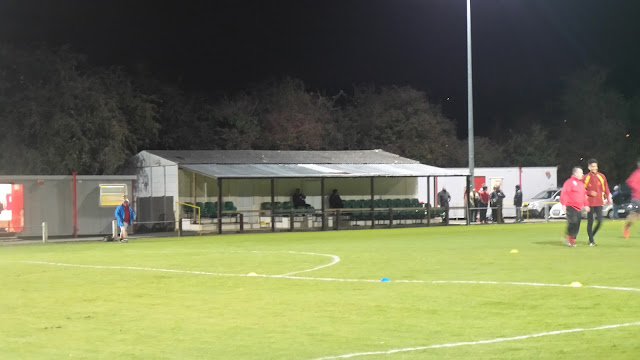 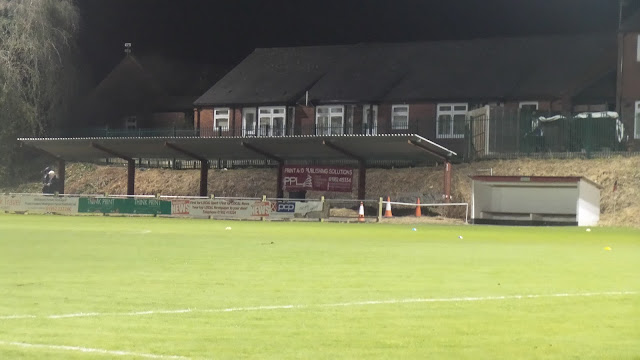 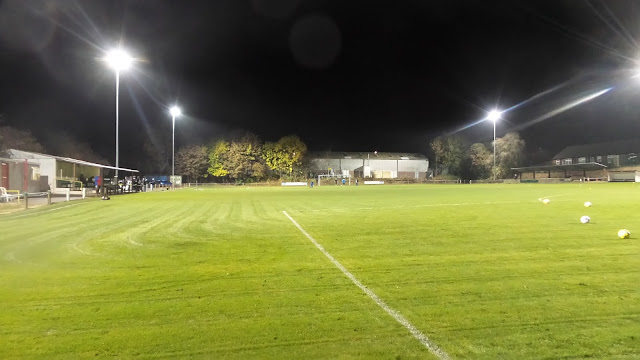 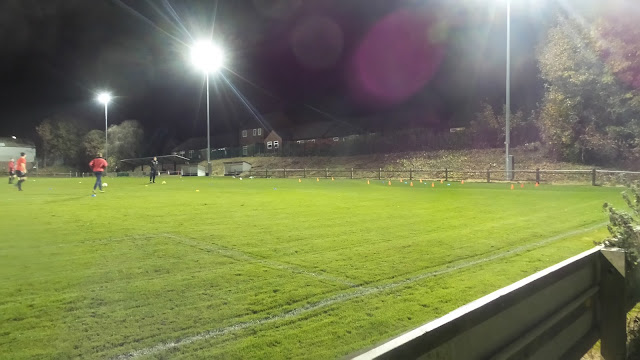 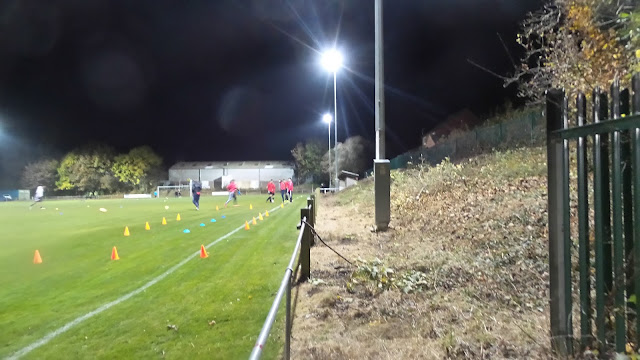 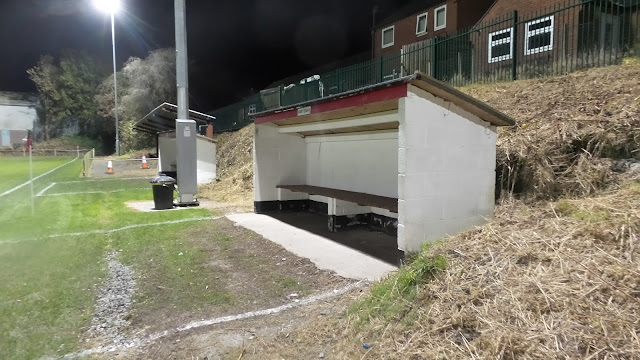 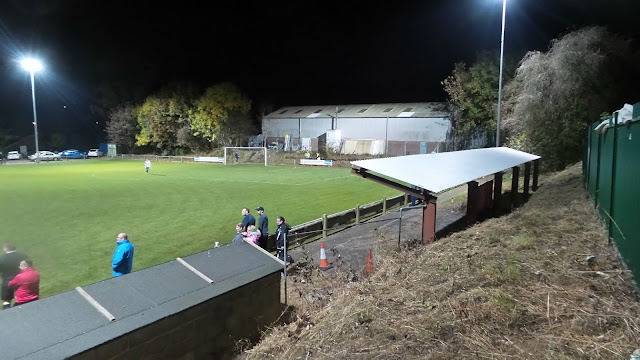