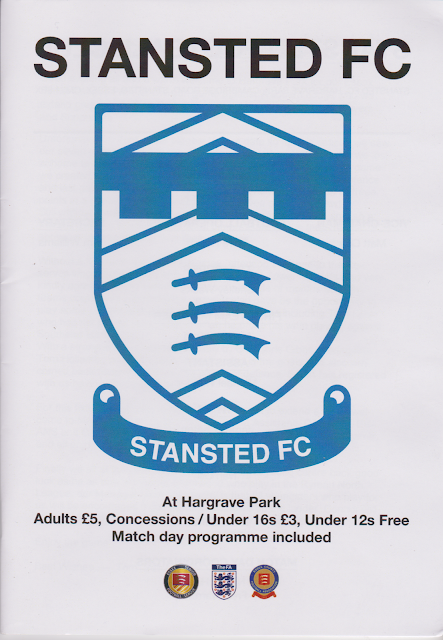 Stansted FC were formed in 1902 although there are records of football in Stansted for some 10 years prior. They spent their formative years in the London, East Herts and Hertfordshire leagues. In 1971 they made the step up, becoming founder members of the Essex Senior League. They only had one win all term in their initial season, although the next year of 1972/73 saw them improve dramatically and finish in 3rd place behind Billericay Town and Basildon United.  Ten years later they improved that, with a runners-up spot behind Heybridge Swifts. They finally won the Essex Senior League in 2009/10 and came close to retaining it the season after, when only a points deduction prevented them from retaining the title. They'd wanted promotion to the Isthmian League, but with their ground not meeting the criteria they fell away badly, finishing in the bottom 4 for the next 3 seasons. Since then, they have recovered, finishing in the top half for each of the next 2 seasons. They've continued that this season, sitting in 4th place at the time of kick-off.

Stansted's best run in the FA Cup came in their second season in the competition, 1996-97. Impressive victories over higher league sides Aveley, Hemel Hempstead and Hampton saw them reach the 3rd Qualifying Round before a 5-0 defeat at St Albans City. 1983/84 would see them win the FA Vase as they defeated Stamford in an enthralling 3-2 victory at Wembley Stadium. Local cup honours include the East Anglian Cup, Eastern Floodlit Cup and Stansted and District Challenge Cup. Famous former players include Dwight Gayle whose goals propelled them to the Essex Senior League title, Gary Hart and Alfie Potter. 1983/84 saw them set two records - beating Coggeshall Town 15-0  to record their record margin of victory, whilst also recording their record attendance of 828 against Whickham in the FA Vase. 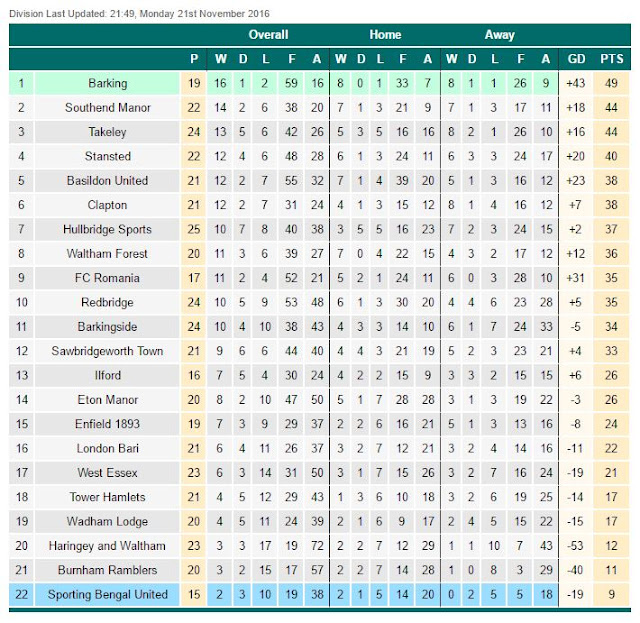 My choices were limited on this Tuesday, as fellow hopper groundhopper Anwar had to work until 5.30. The cold weather didn't help, with not many games scheduled and the potential for those that were to fall victim to the weather. With the fact that Anwar's work was on the way to Milton Keynes and the M1, Stansted was initially dismissed as a choice due to its geographical location and the fact that there were no backups around there. Of all the options on the M1, Kirby Muxloe was the nearest as they hosted Rothwell Corinthians. I also had backups in place at Birstall United, West Bridgford, Ashby Ivanhoe and Radcliffe Olympic in place should our original choice be postponed. 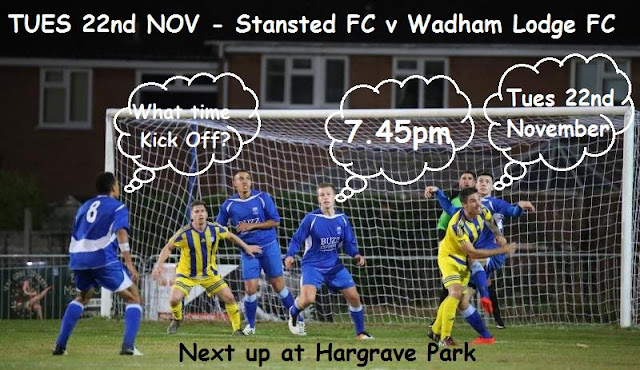 The day of the game came, and it was my usual day off work. I originally planned to walk to town and back but after finding some good offers at my local shop, decided not to bother. As it turned out, I needed to go down town anyway, as whilst I was walking back home I got a notification to say that my laptop was ready to pick up, but I decided to come back and have a rest before taking the car down. It was during this downtime that I discovered that my second choice for tonight, Birstall United v Dunkirk, had already bitten the dust. With that in mind, and the fact that their pitch was looking good, I bought Stansted back into the fold, and set up a Twitter list to keep an eye on the remaining games. After going to pick up my laptop, which I was very pleased with, I came back and as the afternoon wore on, more options were being postponed. With me down to 2 options at 2.30PM, Stansted had gone from an afterthought, to the favourite after they and West Bridgford had tweeted that their pitches were fine. I texted Anwar and he gave his preference as Stansted which was fine by me, as it was by far the closest. 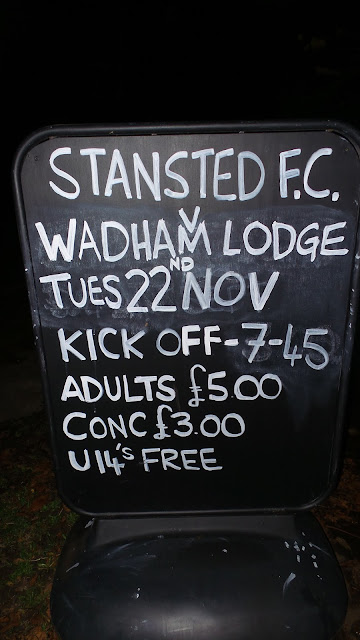 I spent the rest of the afternoon researching the club, as well as catching up on various other things, before leaving at 4.45PM. The traffic on the smaller roads was bad thanks to dawdling drivers and so I was about 5 minutes late to our meet. It also took a while to get out of Wingrave thanks to roadworks. Thankfully the rest of the journey was fine, and we were in Stansted by 7. First job was to find something to eat, in the end I opted for a pancake roll and chips from a Chinese takeaway which was £4.10. It was pretty average but at least it was a decent portion size. From there we went to the ground. We got there around 7.20 and were given a nice friendly welcome. Even better for my finances, it was only a fiver for entry and that included a decent programme. Some clubs charge £7 for entry alone in the Essex Senior, so to get a programme thrown in for £2 less was a real bargain. After a brief chat with the chairman we went and sat in the stand and ate our dinner while we waited for the game to start. 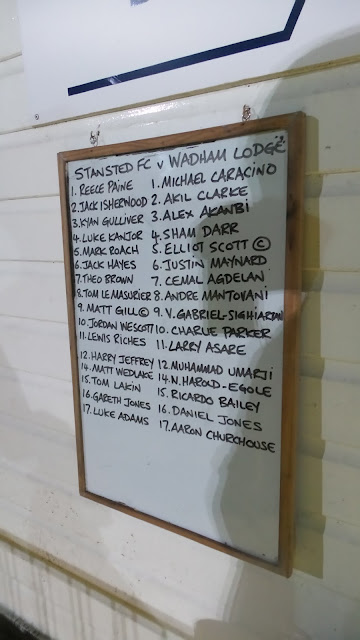 The hosts took an early lead with just a couple of minutes in. It was a bit of a scramble, but Jack Hayes bundled home from close range to give Stansted the lead. They'd shaded the first half, but just before half time, Wadham Lodge equalised. There was a loose ball just inside the area and Larry Asare pounced to fire the ball into the roof of the net to level things up. It was a pretty tough game to referee, with plenty of full-blooded tackles going in, and objections to the referee about his decisions. However Mr Gray generally handled things well, being fairly consistent and keeping the game flowing with no unneeded sending offs. Wadham Lodge were by far the better side second half, and to be fair overall. They got their reward late on when they got a winner, Valdut Gabriel-Sighiaurau using his pace to get away from the defence and rolling the ball in the bottom left-hand corner. 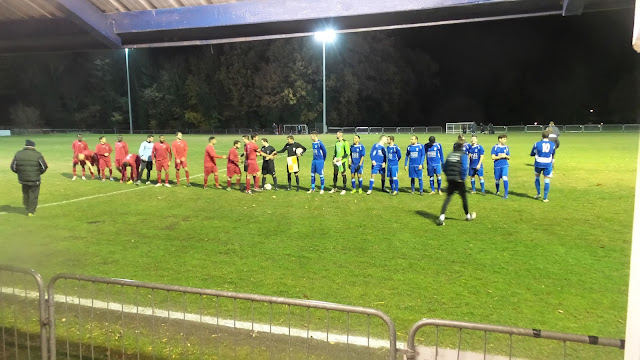 It had been quite a physical game, but an entertaining one. In the dying embers of the game we were delighted when news came through of a late winner for Wycombe at Newport County. Naturally we were delighted, and tried to listen to BBC Three Counties online. However in keeping with their incosistent coverage, there was no stream available due to copyright. This didn't stop us getting coverage on Saturday from BBC Radio Cambridge, so it was disappointing not to be able to listen to the post match analysis. Insted we had to make do with the irritating Andy Goldstein on TalkSPORT as they talked about Spurs exit from the Champions League as if it was the only game in the country that night. I dropped Anwar off, before driving home. Though it was a pretty early night home for me, I couldn't get to sleep for ages, so I watched 'Dave Gorman's Modern Life Is Goodish' amongst other things. Eventually I got to sleep at around 2am, though with me being up at 4am, I had to catch up the following afternoon. 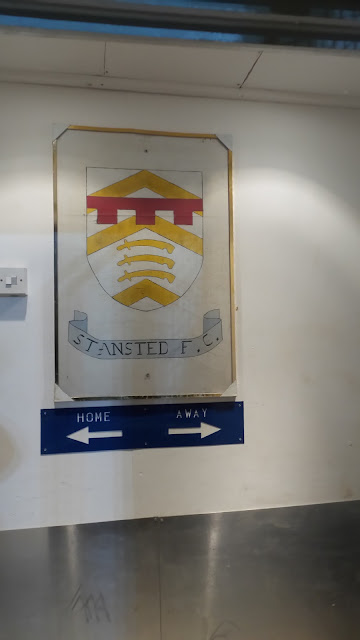 HARGRAVE PARK is a classic non-league ground, which is deemed suitable for step 5 and below. This is despite a 200 seater stand, though there could be so-called 'safety concerns as the leg room is not great, and access can be tricky. Next to that is an area of cover, with enough space for 100 people. I didn't use the bar or tea bar on the night, but it seemed to be the standard fare at a reasonable price. The ground is shared with the local cricket club, meaning that some early games, mainly in the FA Cup, end up getting moved to Bishops Stortford. Overall it's a nice friendly place to visit, great value and a pleasant change to bland, modern stadiums. 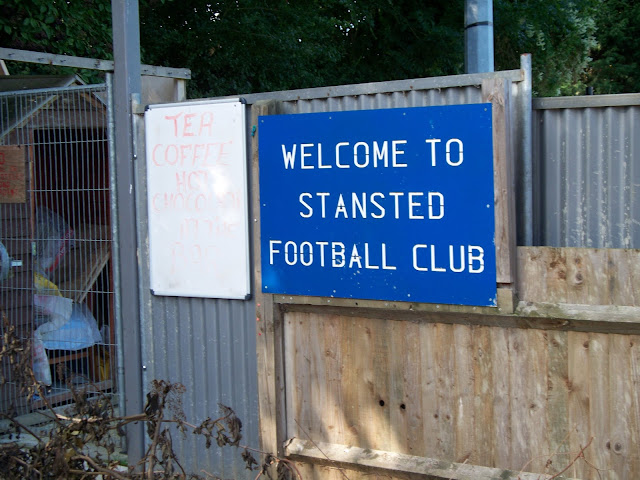 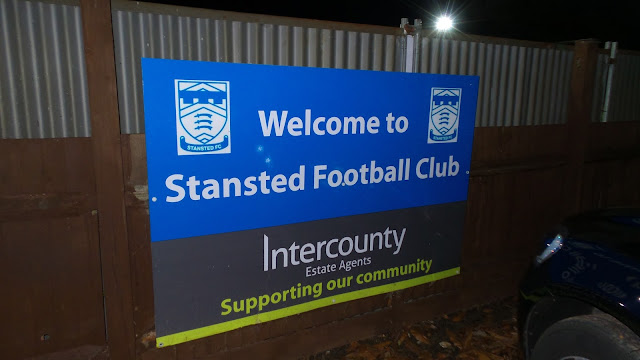 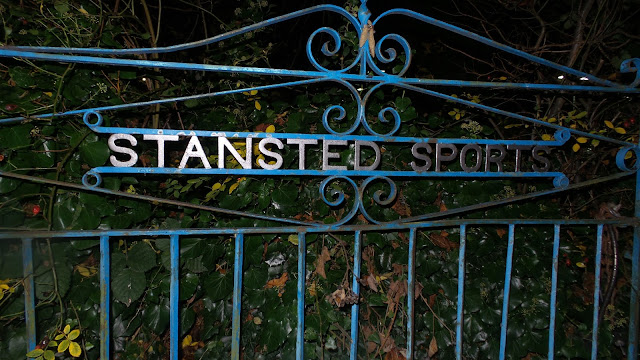 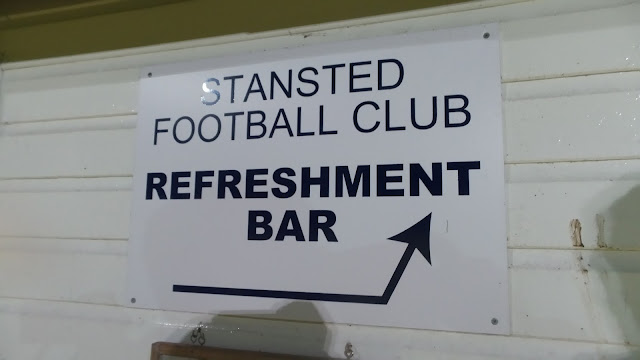 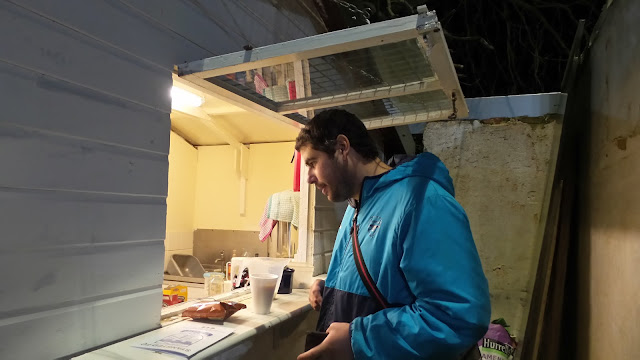 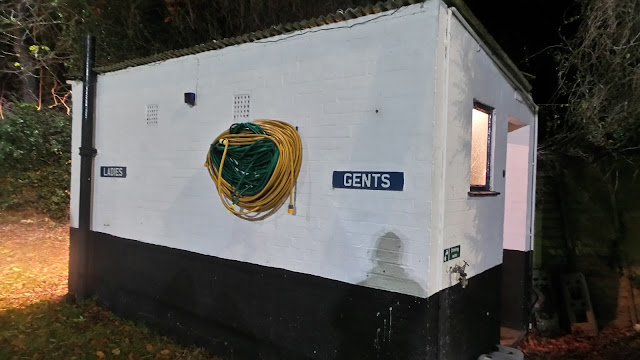 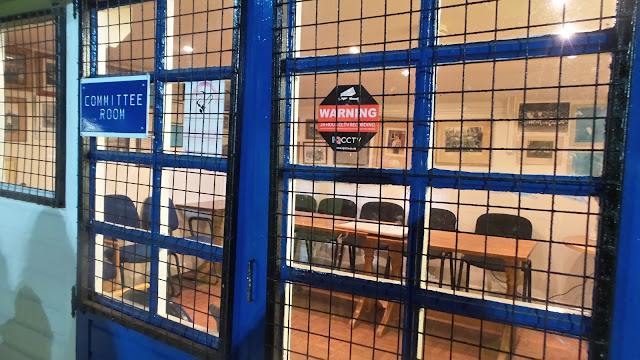 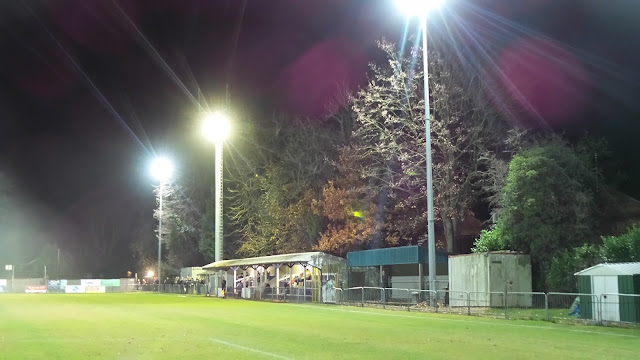 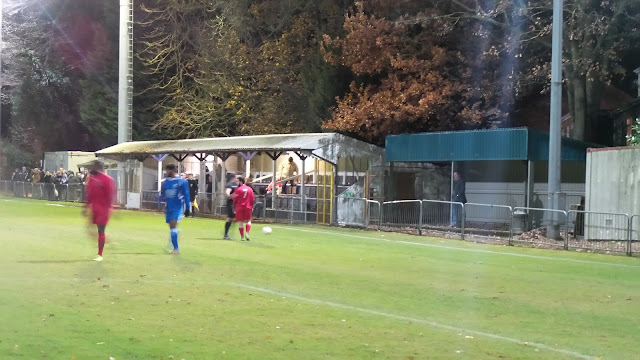 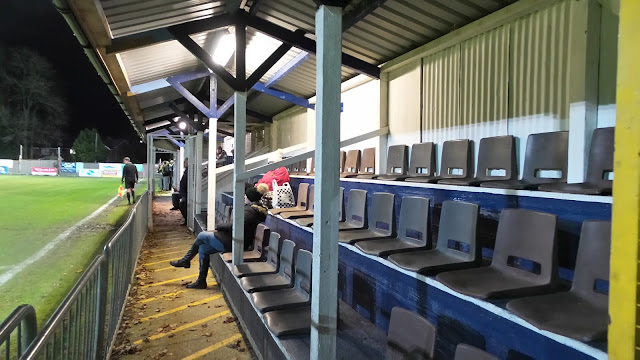 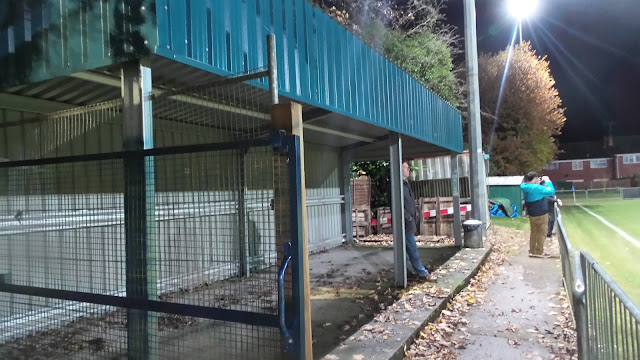 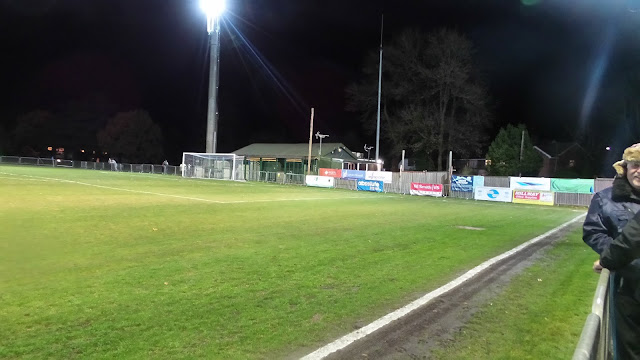 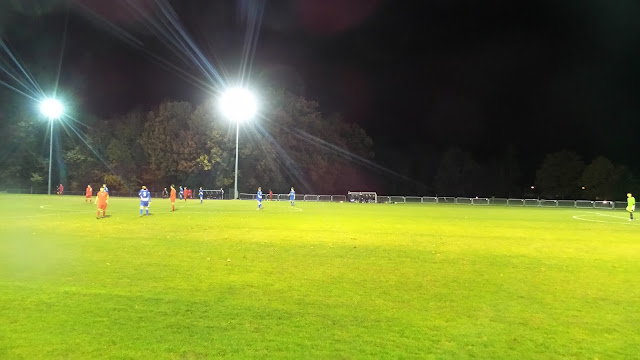 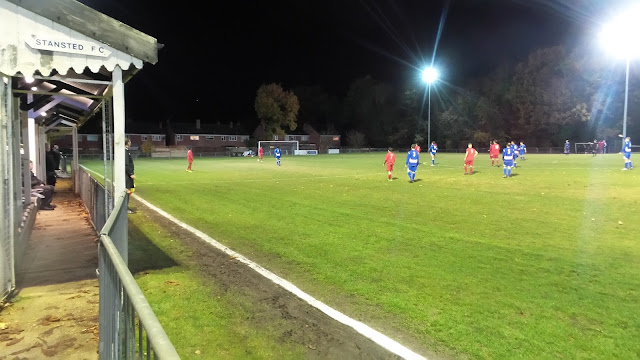 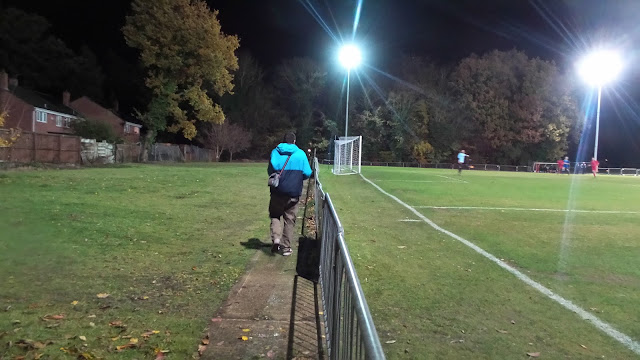