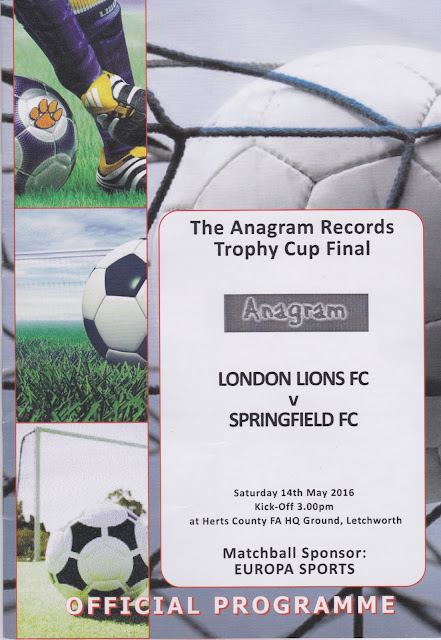 The ANAGRAM RECORDS TROPHY is a competition played between smaller clubs in the South East who do not compete in the FA Vase. It is officially known is the Capital County Feeder Leagues Trophy and was founded in 1999 with the first final ending in a 1-1 stalemate between Tring Athletic and Bedmond Sports & Social. Tring went on to win that first final after a penalty shoot out. It is notable for being the first ever trophy that supporter-formed Enfield Town won in 2002 as they defeated Piston & Ivinghoe 3-1. The most successful team are White Ensign who have won it on 3 occasions. 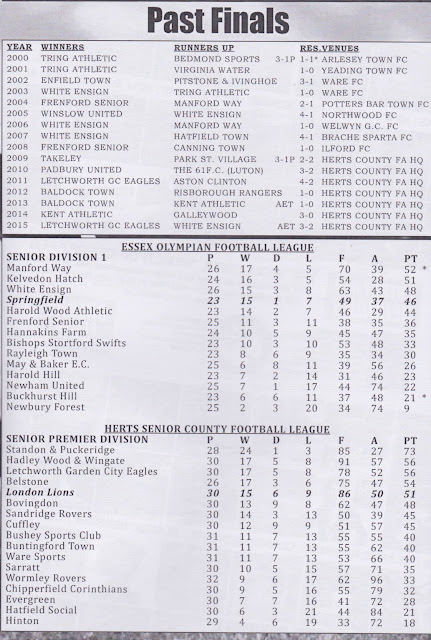 SPRINGFIELD started in the first round of the competition back in October as they beat Old Bradwell United 3-1 on their own ground. The second round was in November as they came back from Aston Clinton with a 2-0 win. By the third round, they were the only Essex Olympian League side standing as they beat the first defeated finalists of the competition, Bedmond Sports & Social 2-1. The final hurdle was the Semi Final as a 3-2 away win at Sandridge Rovers on the 19th March was enough to see them through their first ever final in the competition. League wise they are going pretty well at step 7 of the non-league pyramid, sitting 4th with a couple of games in hand on those above them. The club has been longtime members of the Essex Olympian League and are based in Chelmsford.

Like their opponents, LONDON LIONS would also be contesting their first ever final. They are a club drives from the Jewish community and based in Barnet. They spent time in the Spartan South Midlands League recently, sharing with Conference South outfit Hemel Hempstead Town as their own ground was deemed insufficient for the level. Since dropping back down to the Hertfordshire County League they have returned to their former venue and it looks a decent setup which I hope to visit one day. They currently sit 5th in the Herts County League, which is also at step 7. They started off their cup exploits with a rousing 7-1 win over Luton based ‘The 61 FC’ That was followed up with an impressive 4-1 victory over their fellow league side Stanton & Puckering who went on to win the league. They’d have to travel at last, as they triumphed 5-2 at Letchworth Garden City Eagles, not far from where today’s final is being played. The semi-final saw them at home again, once again to fellow Herts League opponents as they triumphed 3-2 over Belstone. 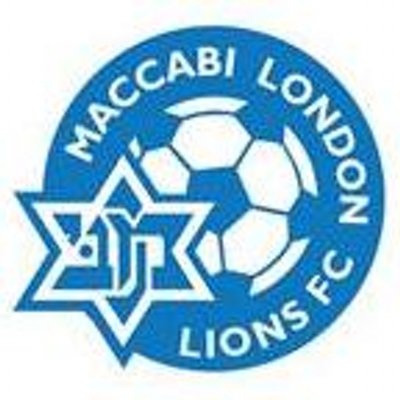 In what could well be my last groundhop of the season, I was on my own once more and so wanted something fairly local to keep the costs down. By far my first choice was a revisit to Ebbsfleet who were playing Maidstone United in the Conference South play-off final. However, as building work was going on at Ebbsfleet’s Stonebridge Road the capacity was restricted to 3800. Therefore the big Kent derby had been made all ticket and as I was unable to get down there to pick one up, the game was out of the question. I did briefly consider a double - Guisborough on Friday night, and then North Ferriby on Saturday. In the end, though, I had a lot to catch up on at home and decided against what would have been an overnight stay. Instead, I decided to go to the Anagram Records Trophy Final which was being played at the Hertfordshire FA ground in Letchworth. This gave me the opportunity to visit either Letchworth or Baldock, both of which had their own attractions, pre-match, something I would decide on the morning of the game.
On the day of the game I woke at 6am on my day off which was a tad annoying, though at least I’d had a decent nights sleep after I’d fell asleep at 11PM. I had a breakfast of Black Pudding & Eggs before taking a shower and getting dressed. I’d still not decided on whether to go to Letchworth or Baldock, so I decided to do both. I’d park up at Morrisons in Letchworth, do what I had to do there before parking at the ground and walking the mile or so to the Orange Tree pub in Baldock. I spent an hour or so researching today’s game and both teams route to the final before leaving home at 10.40. The first part of the journey went well, though it slowed up as I approached the M25. On the motorway itself, it was down to 15mph as muppets slowed down to rubberneck at an accident and I was caught in the jam. It didn't look that serious, a minibus was a bit bashed up and hopefully, all occupants got out ok. The rest of the journey was pleasant and I was parked up at Morrisons in Letchworth by 11.40. 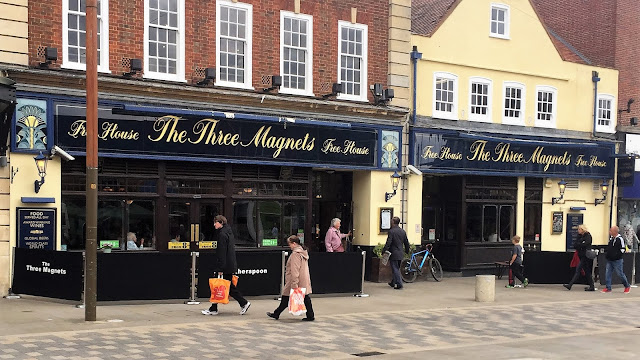 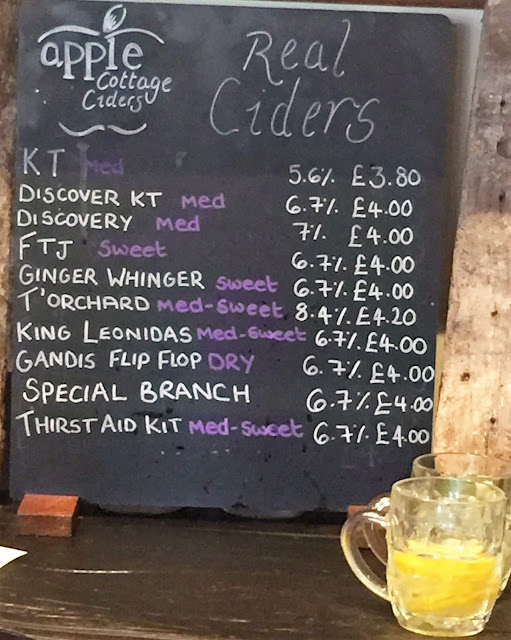 It was a pleasant garden city and my first stop was Wetherspoons for lunch. Though the ever wonderful Black Dragon cider was calling my name I opted for a Strongbow Dark Fruits as part of my meal deal as it was considerably weaker at 4%. For my food, I had a Tandoori Chicken Wrap. The Three Magnets was a bit of a mixed bag, good drinks range and ambience but slow service at the bar and for food. In any case, the meal and drink were good value at £5.25 and up to the usual reasonable standard. After that, I got a few bits from Home Bargains and went back to my car. I got to the ground just before 1pm, packing up and buying a programme which I put in my boot before walking the mile or so to the Orange Tree in Baldock. It was a fantastic place with a great range of real ciders, especially from Apple Cottage. They were actually brewed in the town and it was a shame that I had to drive as the pint I had was delicious. There were a couple of friendly greyhounds in the pub and also a bunch of Morris Dancers for some reason, all jangling about over the place. Once I'd drank my drink I returned to the ground, getting there at 2.30pm and going straight in. 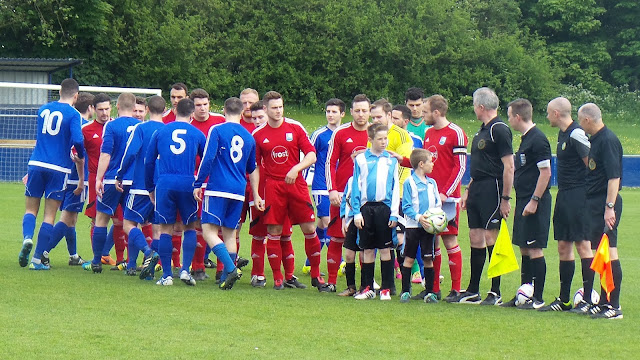 It was a pretty well-specced ground although the Blazers were none too keen to let me into their inner sanctum at the hospitality suite so I walked down the other end to finish my picture taking. I sat in the main stand and it was a fairly tame start to the game with little in the way of clear cut chances. London Lions took the lead on 18 minutes via a curling Austin Lipman shot into the roof of the net from around 12 yards. The Essex side tried to get back on it and indeed has some chances before the break but nothing came of them. London Lions regrouped during the half time break and started the second half on the front foot. They extended their lead on 56 minutes via a penalty from Max Kyte after a foul in the area. The game appeared to have sealed on 67 minutes with a cracking long-range lob by Max Kyte that put London Lions 3-0 up. It was his 41st goal of the season on an afternoon that he broke a club record for most goals in a season, capping a fine performance. Springfield got a late consolation right on full time from Adam Vyse but it was too little, too late. London Lions were worthy winners in what was a fairly decent game. 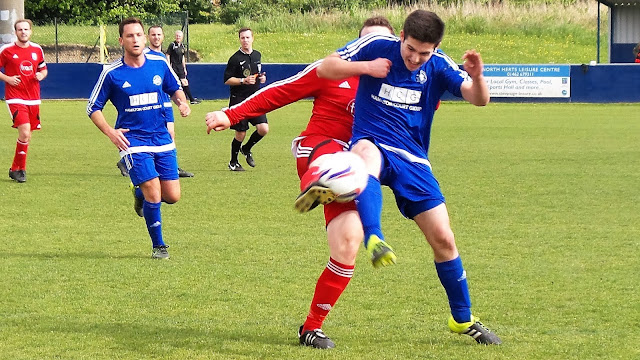 I was just about to turn on my heel when my mate Alex, who lived locally, turned up. I’d not seen him for a couple of years and it was great to catch up as we watched the London Lions team being presented with the trophy. I was just about out of fuel so I had to stop at Sainsbury’s to fill up. On the way back I listened to BBC Radio Kent’s brilliant coverage of the Conference South play-off final over the internet. In an all Kent derby between Ebbsfleet United and Maidstone United, the hosts looked to have it in the bag with seconds to go. But a last-minute Maidstone equaliser forced penalties and the Stones triumphed on spot-kicks after former AFC Wimbledon striker Danny Kedwell missed the decisive kick. The funny thing was, he had already put 2 spot kicks away in normal time. I was disappointed - with a number of teams in the Conference having support from my mates, I was hoping to meet some if they played away at the Fleet, but alas it was not to be. I continued my drive home, getting back at 6.10. I had dinner of Moussaka before going upstairs to finish off this blog. As there was no Match Of The Day tonight, I’d planned on an early night for once on a Saturday, so I wasn’t as tired for the next morning. It would also mean that I’d be awake for the Conference Playoff final, where, fingers crossed, a great bunch of mates from Grimsby will be celebrating a promotion, rather than Forest Green in the battle of which side gets to play Wycombe in League 2 next season. 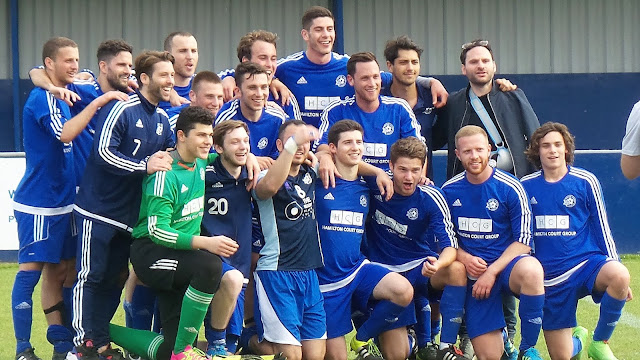 
THE COUNTY GROUND is a smart venue and would suit most teams up to step 3 and at a push step 2 level. There is a 250 seat (approx) stand which is raised above pitch level and gives excellent unobstructed views. There are covered terraces on part of the remaining 3 sides, this probably gives around another 600 fans over. I estimate the overall capacity to be around 3000. There is a bar under the stand which offers a reasonable range of drinks, but nothing spectacular. I didn’t see any hot food either so you are better off walking into Letchworth or Baldock both of which are around a mile away. There are a good selection of establishments wherever you go. On my experience, the cost-effective option with more choice is Letchworth, though if you are looking to treat yourself to something special, Baldock is the one to go for, with the Orange Tree being especially decent. 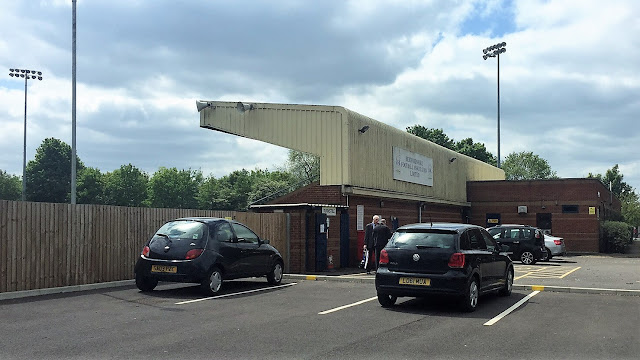 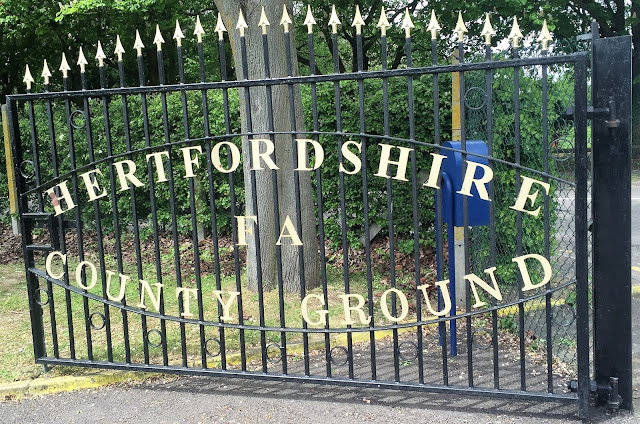 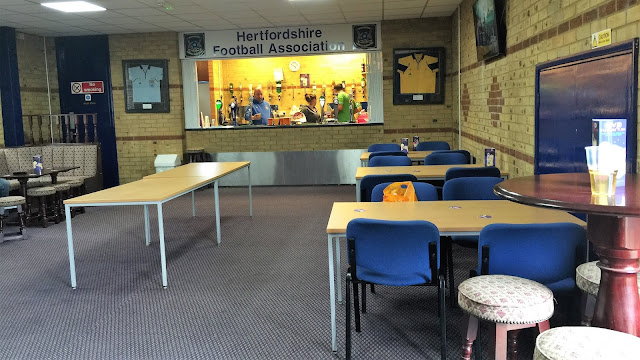 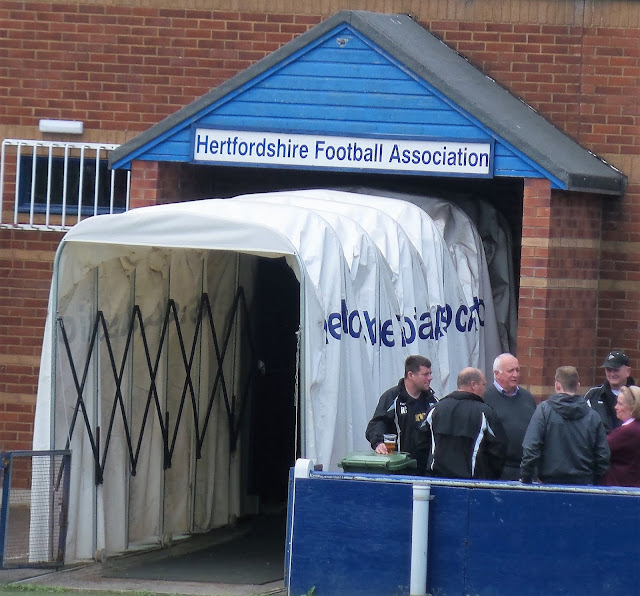 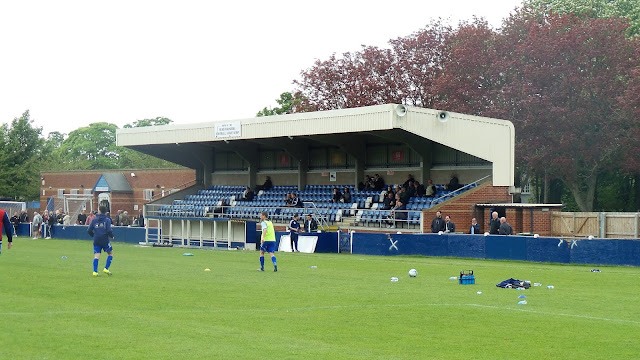 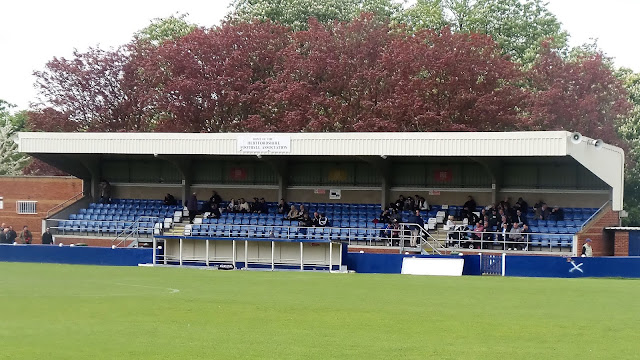 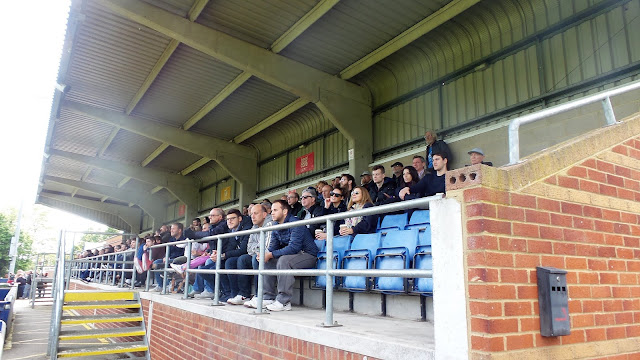 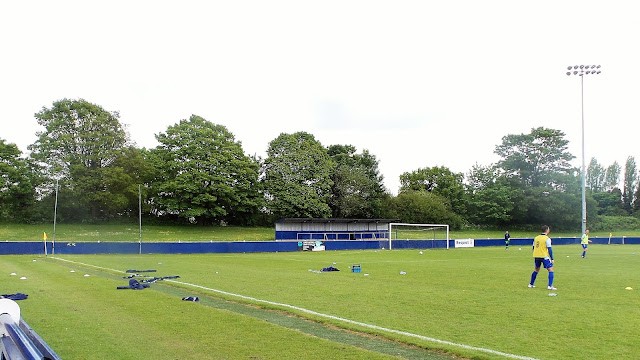 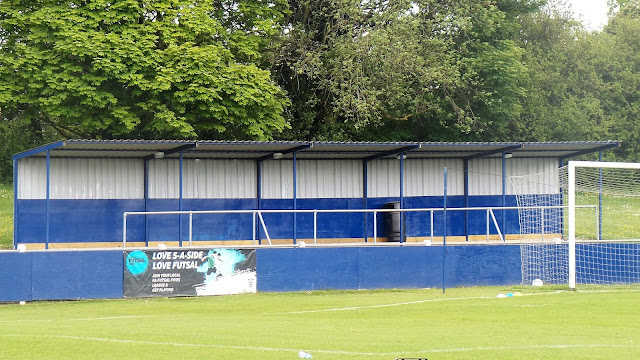 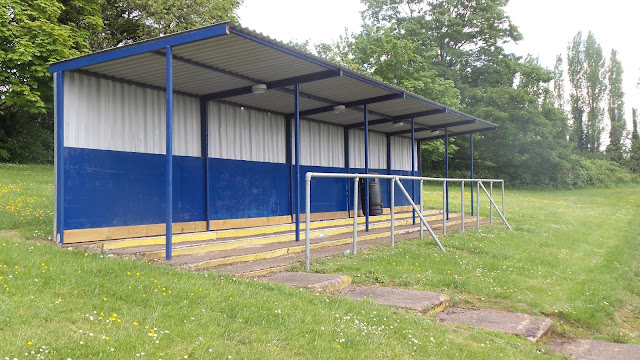 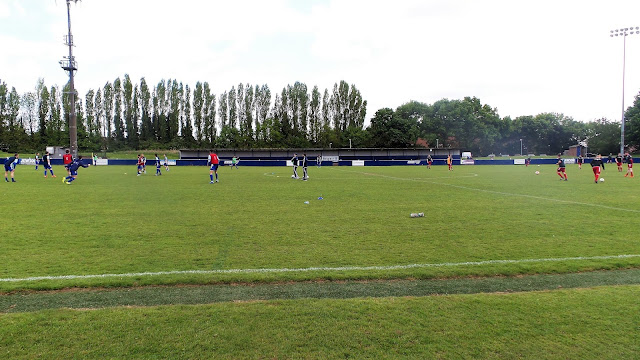 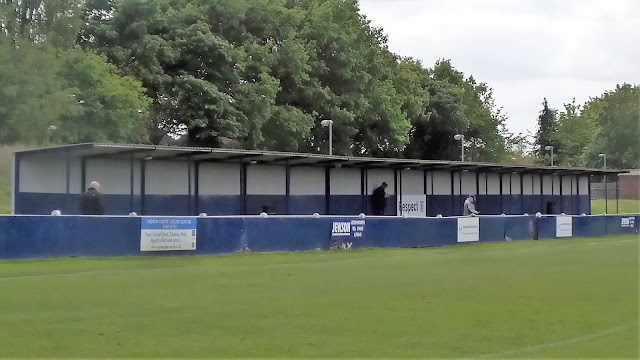 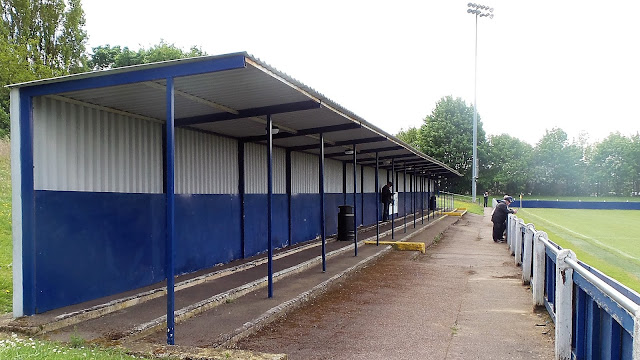 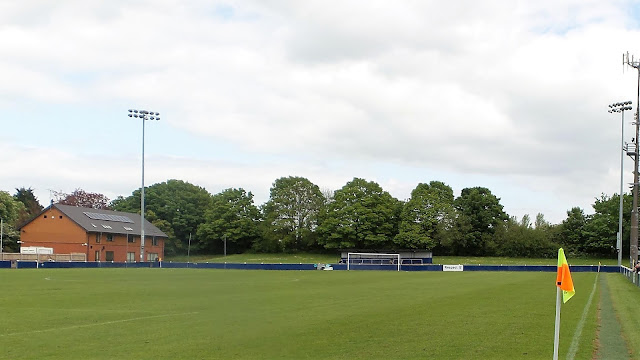 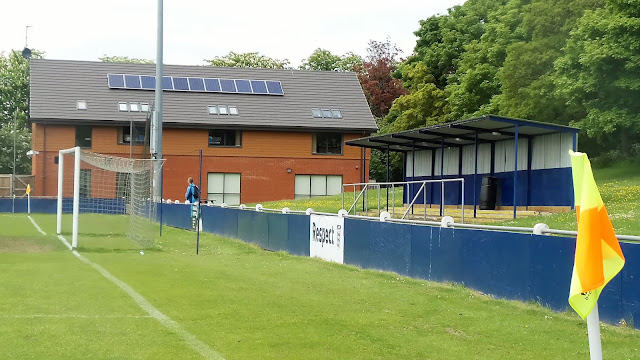 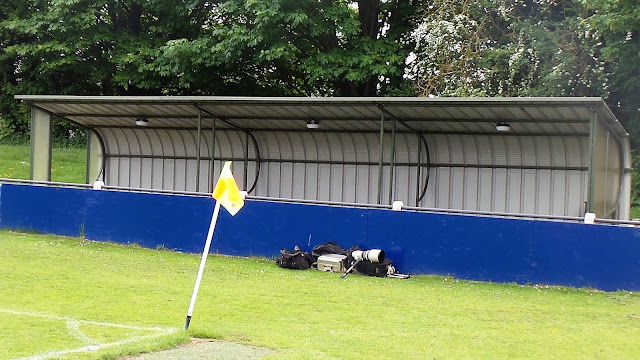 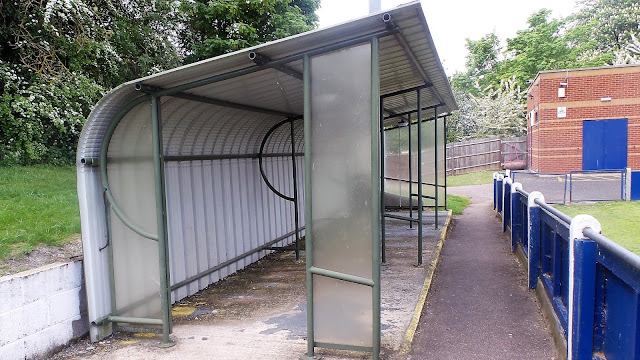 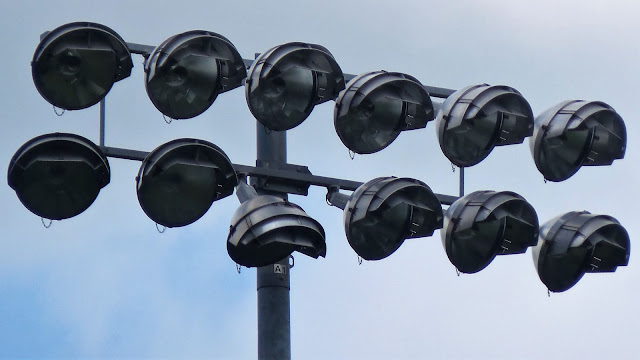