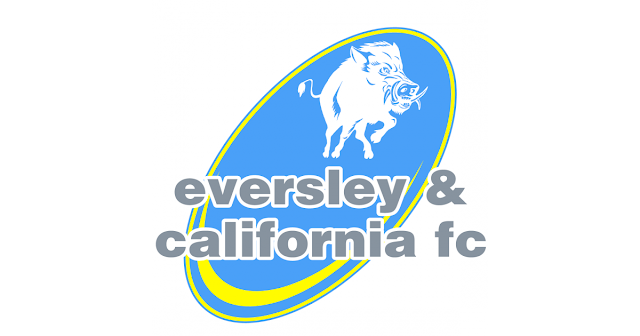 EVERSLEY & CALIFORNIA were formed in 2012 as the result of a merger between the 2 clubs. EVERSLEY was a senior side, competing mainly in the Surrey Leagues whilst California were a junior team for youngsters in the next village. Prior to the merger Eversley had been promoted to the Combined Counties League back in 2009 and had made a steady start, finishing as high as 5th in their last season under their former name. With the 2 clubs now working together they could now raise vital funds for ground improvements needed for promotion. The village of Eversley is one of the most affluent in the UK, though with that money comes the self-interested and NIMBY attitudes of local residents. It was for that reason that they never got full permission for floodlights, having to use a temporary solution as and when needed and as a result was denied promotion in 2014. They fell away last season, finishing in 9th but this season has seen a climb up the table and at the start of the game they sat in 5th place. Even better, they now have permission to use the floodlights for the whole season - meaning that if they finish in the top 3 in future, they will be able to take up the promotion that they deserve.

The club has not yet competed in the FA Cup and only have one FA Vase appearance. That was in 2014/15 where they hosted Hellenic League side Tuffley Rovers who would go on to gain promotion that season. An entertaining 3-3 draw was played out and with the 2 sides a fair distance apart, it was agreed to settle the tie on the day. It went down to a penalty shoot-out and Eversley lost out 6-5 in the shootouts after over 2 hours football had been played in the 2nd Qualifying Round tie. The club won the Surrey Intermediate League Cup as well as the leagues itself in the double winning year of 2009. They can name ex-football league player Andy Clement as one of their former coaches whilst rugby player Will Carling and football manager Nigel Adkins have links to the town. 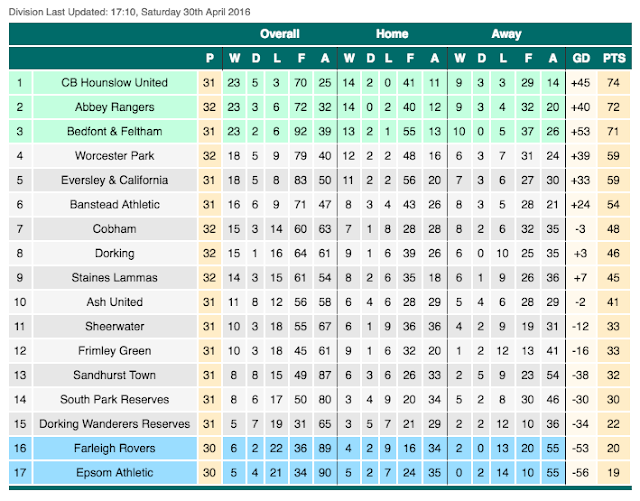 I knew I’d be working this day and given that it had been a busy day, I was expecting a late finish and a quick dash to football and limited choice of games. Even so I did consider some longer trips, giving my fellow groundhopper Chris a lift if I went via Milton Keynes. A potential double was on the cards with a few evening kicks offs, but I thought the chances of it happening were slim. In between my last groundhop and now I’d seen another Wycombe game as yet another disappointing showing saw us lose 1-0 at home to promotion-chasing Accrington Stanley. The main problem is goalscoring - with us having scored just 14 goals in our last 23 games since the turn of the year. For once I was glad that the season at home was over for Wycombe, but I was still looking forward to some groundhops, though not so much to our trip to Oxford United next Saturday where the chances of a happy outcome are slim - at least for the Wycombe supporters. There were a number of choices if I did do a game on my own, but pretty much the front runner was Eversley & California which would only be around a 60-mile round trip if I left from work. With me ever keen to save a bit of money this was ideal and it was a game that had something riding on it, even at this late stage of the season. I did think that Eversley & California sounded a bit like an obscure 1970's rock band though, even so, I was looking forward to a fairly local trip. 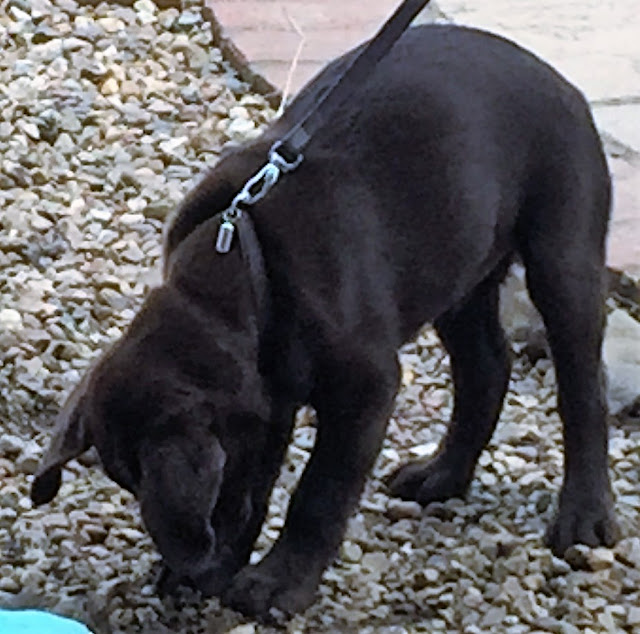 On the day of the game, I was not too chuffed to be working the Bank Holiday, but I have to do two a year and it was good to get one of them out of the way as soon as possible. Thankfully it was a nice easy day and I was out by 10.15, getting some chicken to take with me to the game, as well as various other bits I needed. In any case, I was getting paid until my normal finish of 1PM, so it was win-win for me. I had time for an hour at home, despite having to drive right past work I decided to use this, rather than go early and ‘tick’ Wokingham Wetherspoons. I had enough time to catch up on social media and also do a little bit of research for today’s game, as I hadn’t fully decided where I was going until 7.30 that morning. I left at 11.40, getting to the ground at 12.25, the first bulk of the drive being exactly the same route as I took to Fleet on Friday night. After having a look around and finding the clubhouse closed I made my way into the ground. Sadly there was no programme, nor team information but at least it was fairly reasonable at £5 to get in. I had a walk around the ground, sitting and eating the chicken I had bought on the covered terrace. 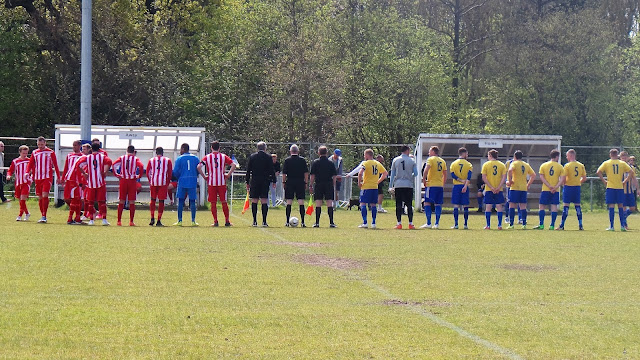 The match started bang on time and was an open encounter with both sides playing well on the break. The hosts took the lead on 6 minutes after a delivery from a corner was put in, wasn't cleared and Dan Griffiths effort from the edge of the area looped over the keeper to give his side the lead. Bedfont actually had the better chances from then on but were not helped by bickering amongst themselves and it remained 1-0 at the break. It was Eversley who made it 2-0 on 50 minutes - a decent ball down the line led to the chance and it was a great 20-yard strike from Lewis Robson that doubled their lead. They looked more like extending their lead but eventually, Bedfont had a decent spell and the pressure told. Firstly on 73 minutes, the ball was played through and Bedfont's Michael Campbell knocked the ball between the onrushing keepers legs. He completed his double two minutes later with a lovely lob over the keeper. The turnaround was completed on 78 minutes after a penalty was converted by Jacob Lambe following a foul in the area. Eversley's number 2 was sent off a few moments from time for kicking out in frustration and although the tackles got quite meaty at times it was generally a good natured game with the offender laughing and joking as he was sent off, even after his manager mentioned the prospect of a fine. It had been a thoroughly decent afternoon’s entertainment between two good sides but the hosts ran out of steam, in the end, having gone 2-0 up. They were carrying a number of injuries and as a result had to name a central defender in goal who actually made a number of excellent saves, and could also name just the one substitute. In the end, Bedfont just about deserved the win and may well pip CB Hounslow United to the title in the unlikely event that they fail to beat basement side Epsom Athletic next Saturday while the hosts finished in a credible 5th place. I drove home, listening to the Two Mikes on TalkSPORT where pompous food critic Jay Rayner got upset when they asked him questions that he didn’t fancy answering. The journey home was decent, though I was glad of the 1PM kick off as it started to rain quite heavily on the way back. I got in at 3.45 and typed my blog as well as doing some other paid work online. I spent the rest of the evening relaxing and watching TV, safe in the knowledge that it was my day off tomorrow with a match at Bovingdon to look forward to in the evening.

HALLS WAY is situated amongst pleasant greenery and is part of a big sports complex including a cricket club. It’s pretty flat and open so could suffer on a windy day, so my visit in mild sunshine was an ideal time to visit. It’s quite basic with just 2 arena metal type stands - one holding 57 seated and the other around 75 standing fans, This is more than enough for the attendances they get while the rest of the ground is open hard standing. There was no programme not bar open when I went, though there were a couple of pubs locally which were in the real ale guide, but not listed for real cider. The tea bar offered the usual range of burgers, hot dogs and bacon rolls as well as a good range of chocolate bars and hot and cold drinks. 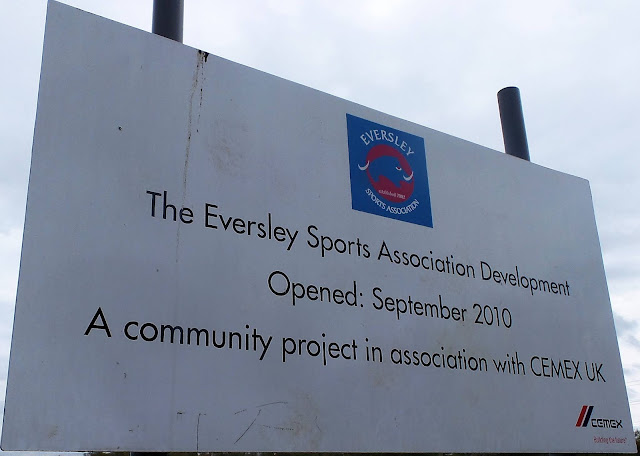 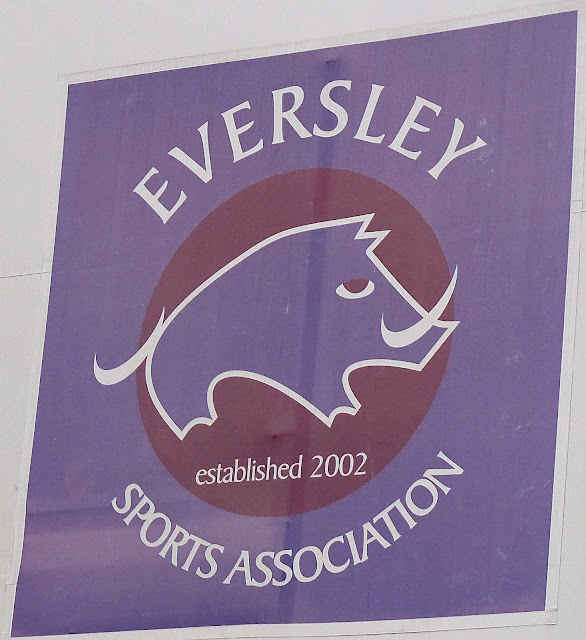 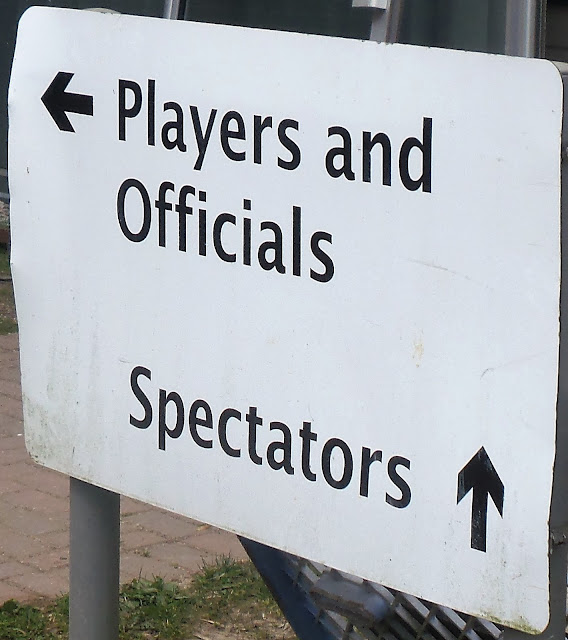 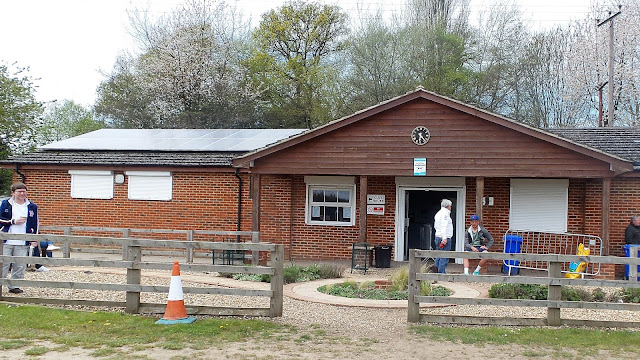 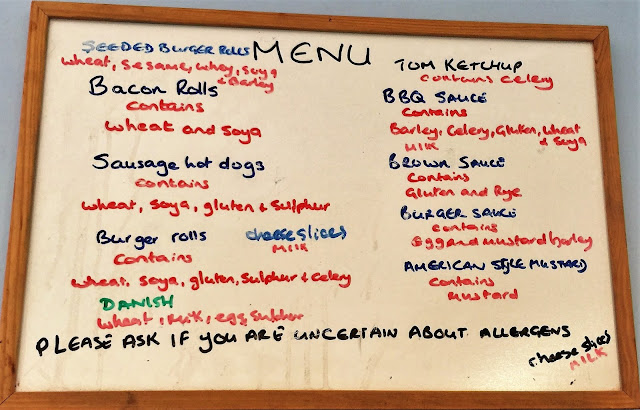 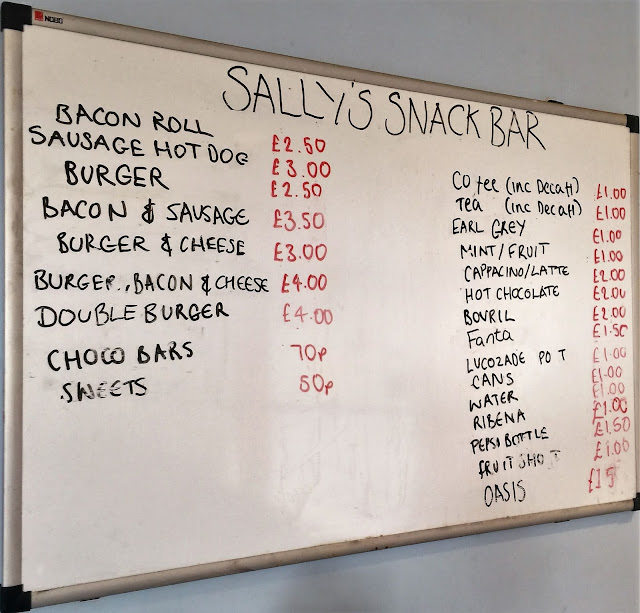 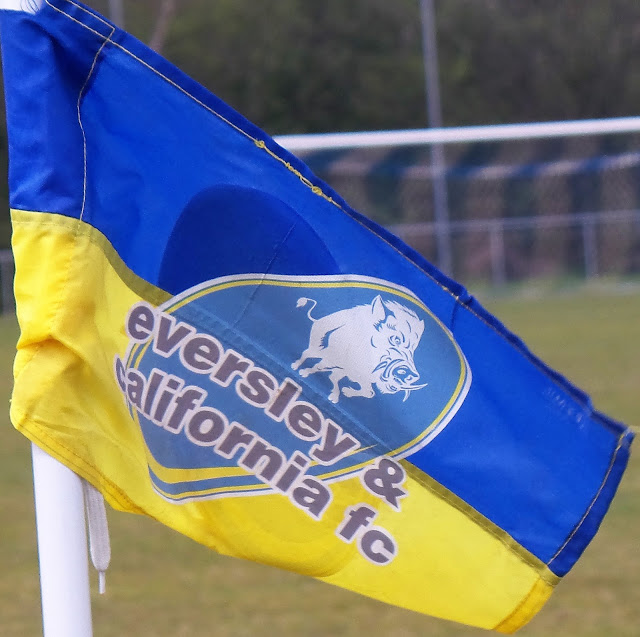 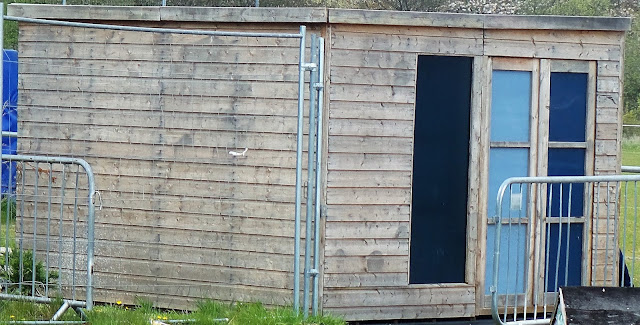 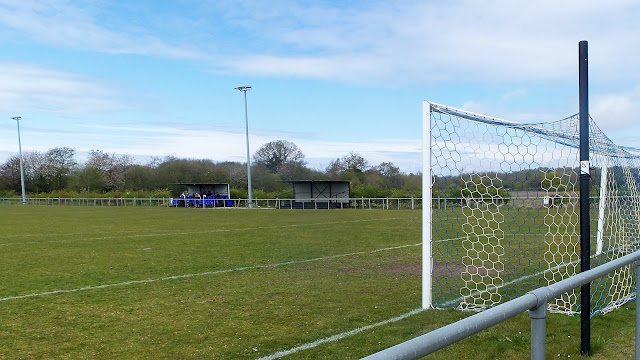 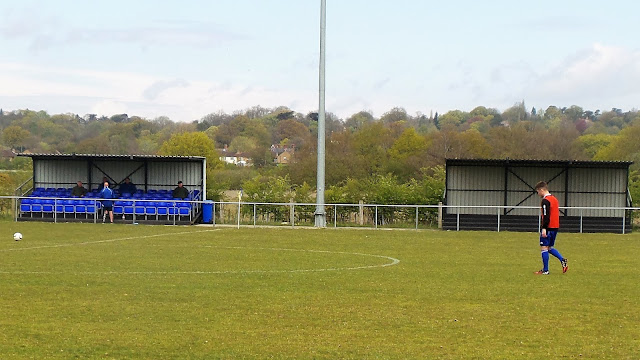 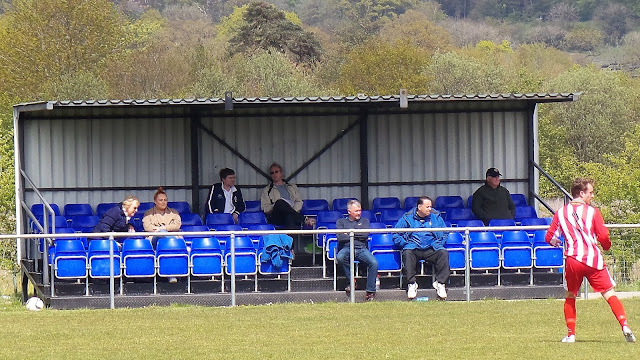 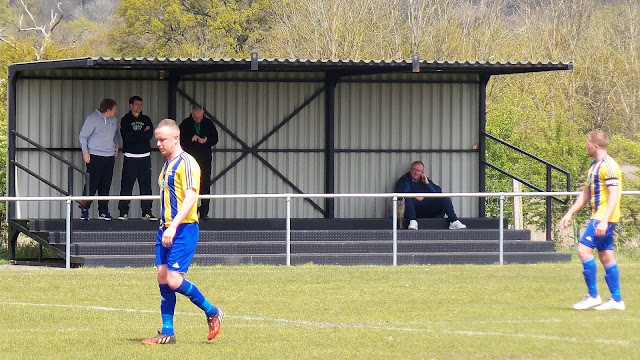 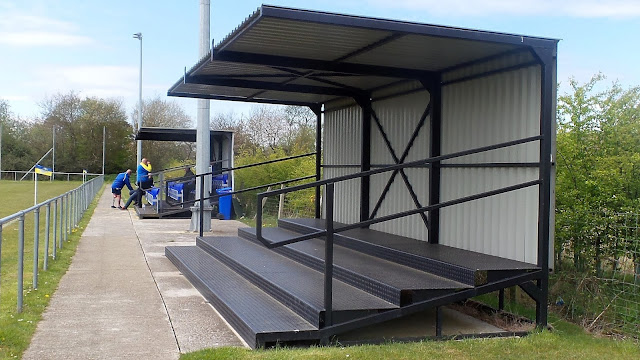 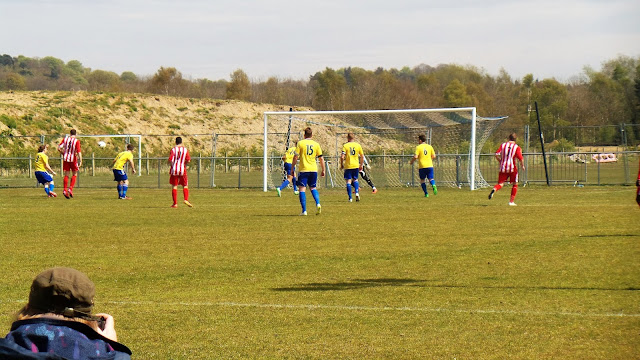 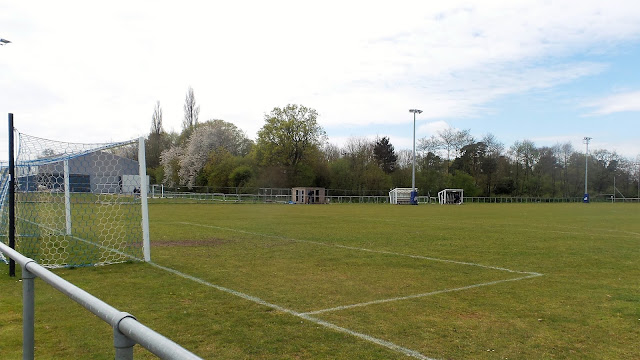 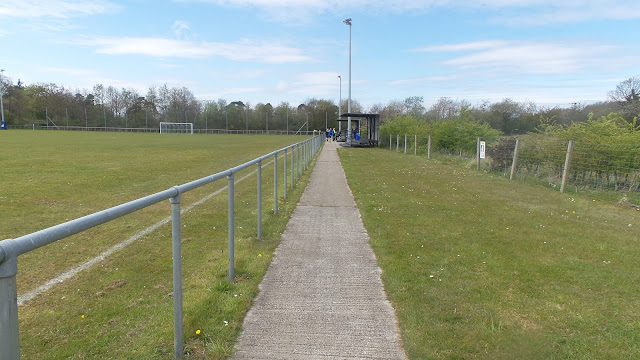 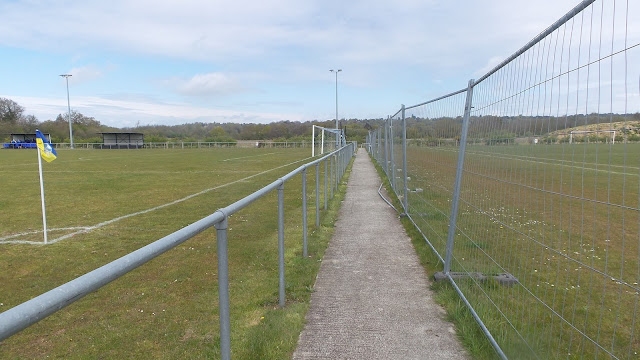