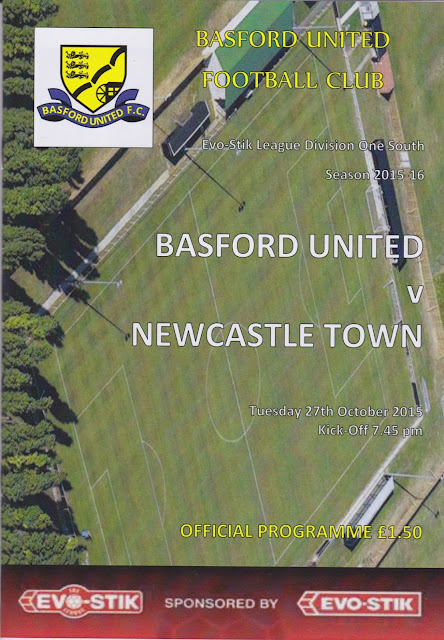 BASFORD UNITED FC was formed in 1900. They have enjoyed a rapid rise up the leagues, indeed they were playing in local Nottinghamshire Leagues up until 2011. For 2011/12 they joined the Central Midlands League South at step 7, winning the league at the first attempt and earning promotion to the East Midlands Counties League. They won that league too, joining the NCEL Premier for the 2013/14 season. In their one season here they finished 5th, before transferring to the newly formed Midland League for the start of last season, Their rise up the leagues continued as they won the league once more and for this season they took their place in the NPL D1 South. Once again they were going well, sitting in 5th place. Opponents Newcastle Town (who I had seen lose to  Coleshill Town in the FA Cup around 6 weeks ago) were in 7th place, just a point behind.

Due to their rapid rise up the leagues, the club have not had many campaigns in the FA Cup and they matched their best ever progress this season when they reached the 2nd Qualifying Round. After beating Loughborough Dynamo and Long Eaton United before losing to Sporting Khalsa. Little progress was made in the FA Vase in their short time in the competition, though in their first season in the FA Trophy they progressed against AFC Rushden & Diamonds and will face a home tie against Grantham Town on Saturday. Various local competitions have been won including the Notts Senior Cup on 2 occasions. 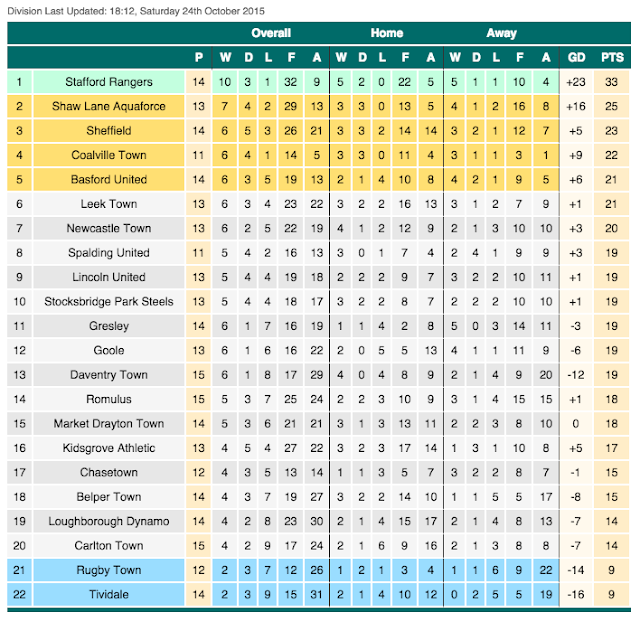 As it was half term, my groundhopping partner Anwar would not have to pick his kids up from school, and so we would be able to leave earlier if needed. The original plan was to take in a game in the afternoon - Wigan Athletic were playing in the FA Youth Cup at the Wigan Robin Park Arena and it was a 3PM kick-off, meaning we could take in another game in the evening. Sadly his parents were busy until 2PM so that was that idea knocked on the head. I was hoping to go to the FA Cup replay at North Ferriby United v Stalybridge Celtic, but unusually for them, the game was being played on Wednesday. Anwar presented a list of the games he was interested in and I plumped for what I felt the most attractive one - Basford United v Newcastle Town. This was a good one for me as I'd been targeting a visit to there ever since they played in the NCEL over 2 years ago. I was glad to be getting on a groundhop to be honest. I’d had a 2 week break from watching Wycombe play, but when we played Newport County last Tuesday we were dire and were lucky to lose only 1-0 to the bottom side in the league. Carlisle on Saturday was a tiny improvement, but we were still very poor and only got a point thanks to a last-minute equaliser against another struggling side. It now looks as if early season promise of a repeat of last season’s 4th placed finish or better was a false dawn and October has been a horrible month for us with 3 defeats and a draw so far. It was my usual Tuesday off work on the day of the game and so I walked down town as per usual, getting some drinks for tonight's game. After relaxing for a couple of hours I left home at 3.15 and after getting petrol met Anwar in Aylesbury at 3.45. It was a reasonable journey, at first we thought the M1 was going to give us hell when I saw 40 minutes delay on my Sat Nav but in the end, there was only around 20 minutes delay. We got to the ground at 6.15, going to a nearby takeaway called Mr T's. There I had a decent Spicy Burger and Fries before walking back to the ground. Paying a bargain £6 to get in I got myself a programme for £1.50 before going to the club shop. There I bought a mug for £3 and then went into the bar, having a can of Strongbow. After that I went outside, joining Anwar on the halfway line and getting some pictures of the ground while I waited for kick off. 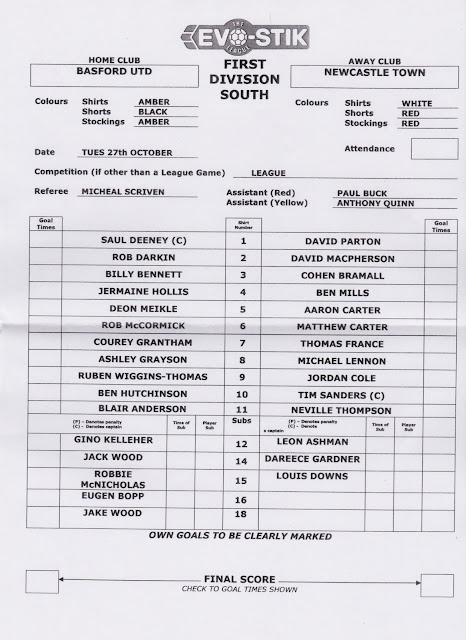 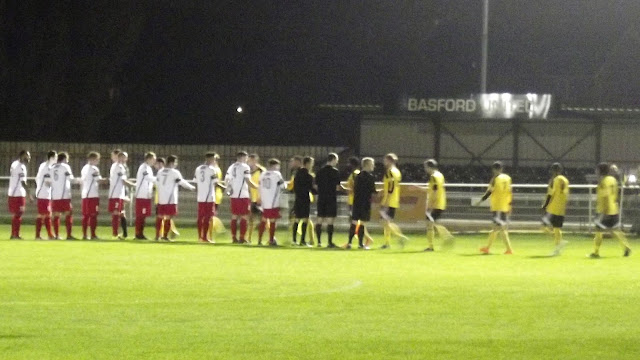 The hosts had a couple of players I recognised. Saul Deeney played for Notts County against Wycombe many times, including our victory over them during our Carling Cup run in 2006/07, while from across the River Trent former Forest man Eugen Bopp also starred. In the early exchanges, Basford dominated possession but it was Newcastle Town that were most threatening in the final third. Even so, it was Basford that opened the scoring on 35 minutes with a well-worked goal from Courey Grantham. It was Basford that continued to dominate but on 59 minutes Newcastle got an equaliser, a pinpoint header into the top right-hand corner from Ben Mills. Despite chances for both sides, that was the way it stayed. Basford will be disappointed they failed to make their possession count but the visitors were a much-improved side to the one I saw lose in the FA Cup earlier in the season. The journey home started off well enough on the local roads. The game between Guiseley and Halifax that would decide where Wycombe would be going in 10 days time in the FA Cup was still going on, but we couldn't find a commentary. Instead, we had to make do with BBC Leicester who were covering their Carling Cup game up at Hull.  We found out that Halifax would be our destination on November 7th, as well as various other scores which included Barwell getting through to the FA Cup 1st Round debut. As it turned out, the BBC moved Halifax v Wycombe to the Sunday, meaning I was unable to go due to work. We got on to the M1 OK, but around Leicester, they had shut it for roadworks. The standstill, along with a poorly worked diversion added an hour plus 20 extra miles onto the journey, not what you want when you are up at 4am.No apology either, and it feels as if I write about the disgraceful amount of roadworks and bad roads every blog. Eventually, I dropped Anwar off at 12.20, getting home myself 20 minutes later. I hardly got a wink of sleep, but thankfully the following day was not busy at work, and I caught up on sleep the following afternoon. 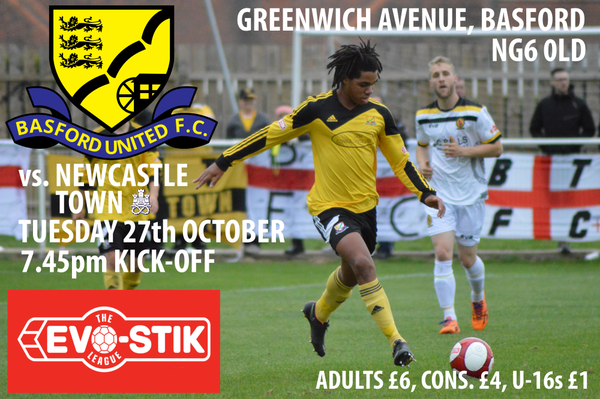 GREENWICH AVENUE is typical of a ground that has seen a rapid rise in fortunes, with a few metal ‘arena’ type stands in place. There are a couple of original small stands, but overall it’s not one for the purists. There is a local pub nearby, but it didn’t seem that great from the outside. Food wise there is a local chippy, kebab & pizza place and an Indian takeaway nearby, while the tea bar at the ground is a decent one also. The club shop has a decent range of stuff as well as old programmes. Overall the £6 admission and the friendliness of the people makes this club well worth a visit. 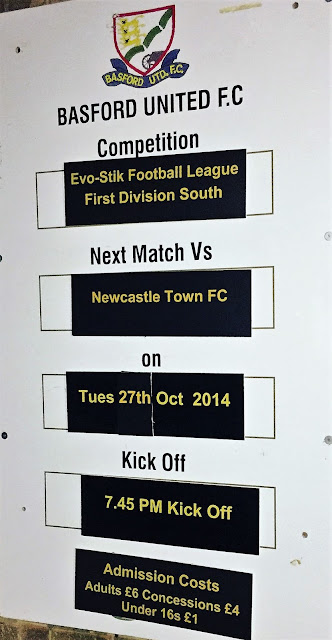 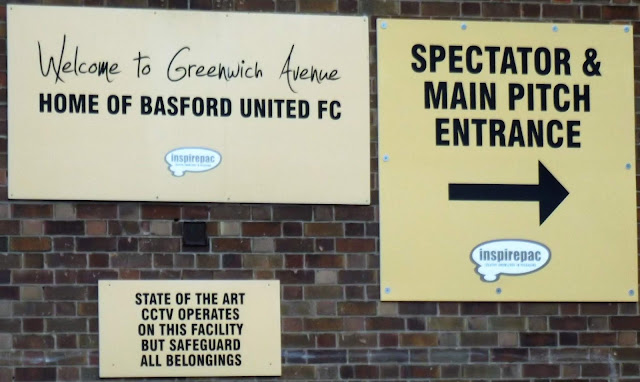 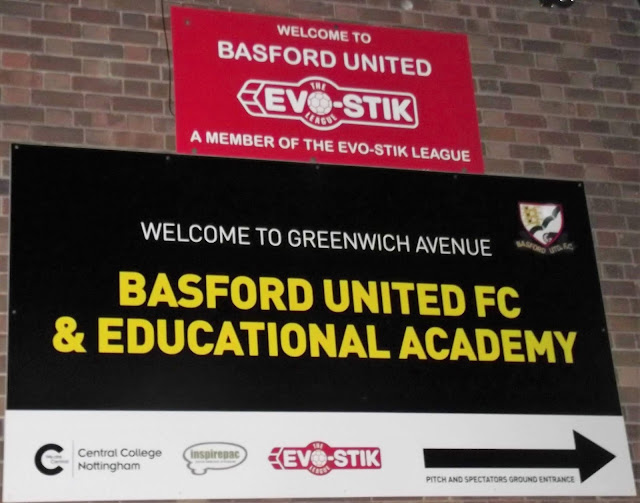 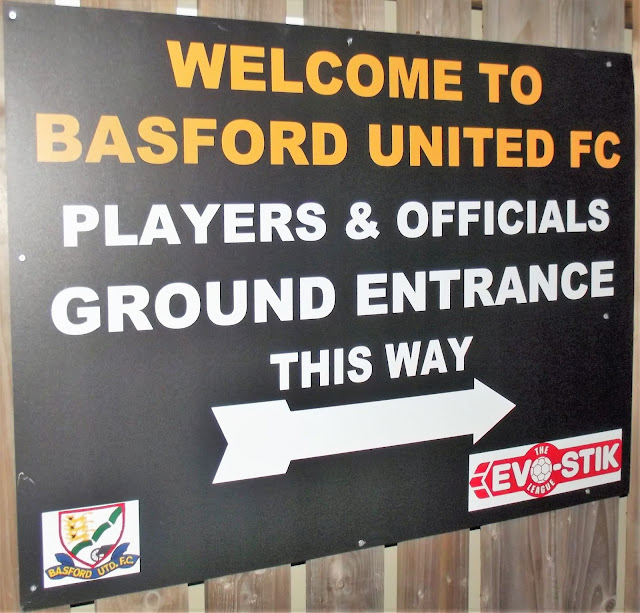 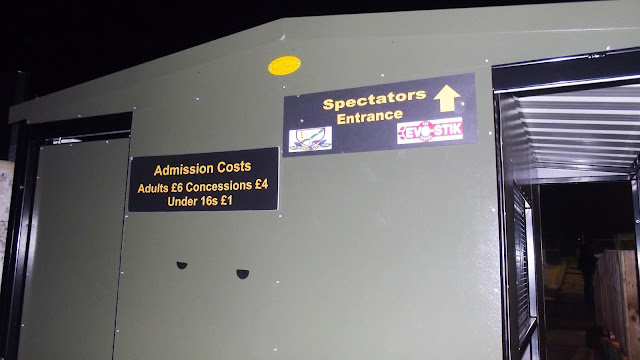 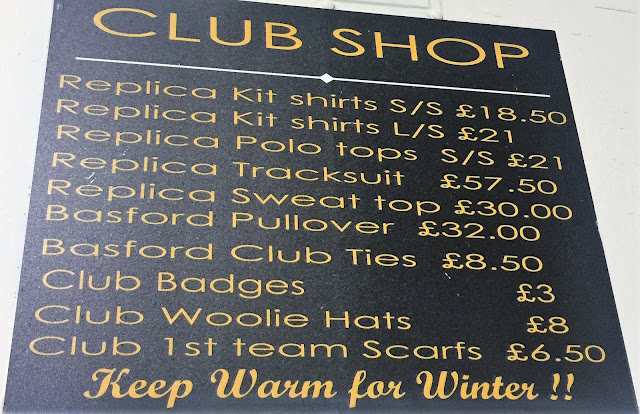 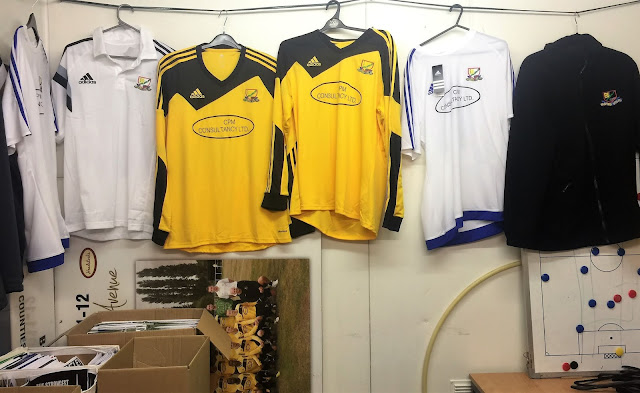 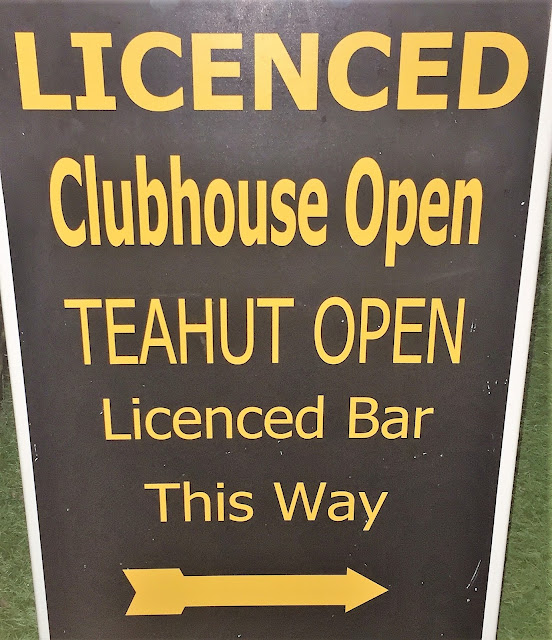 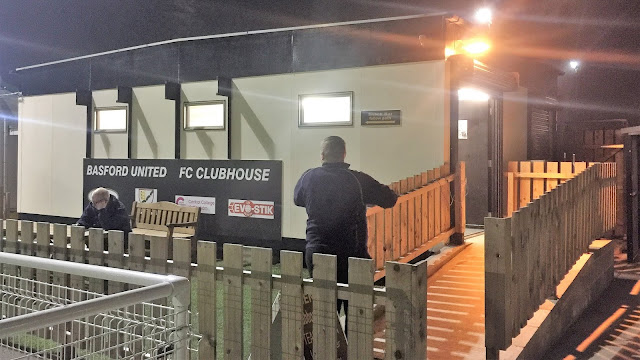 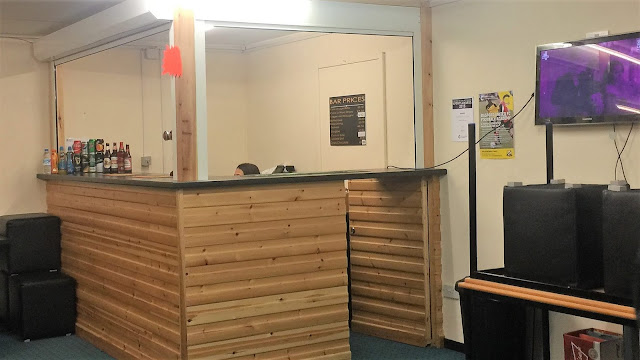 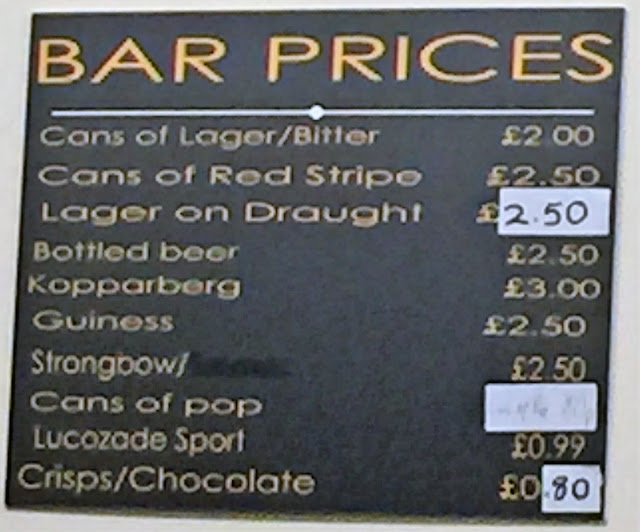 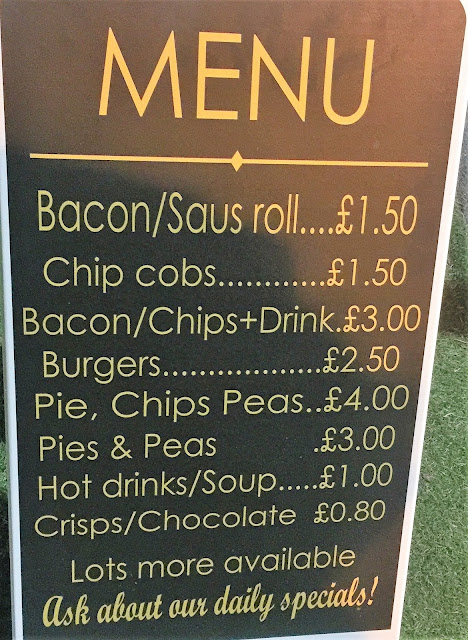 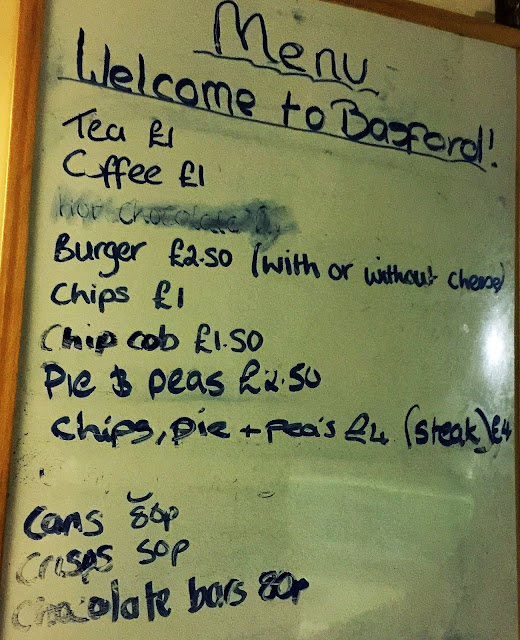 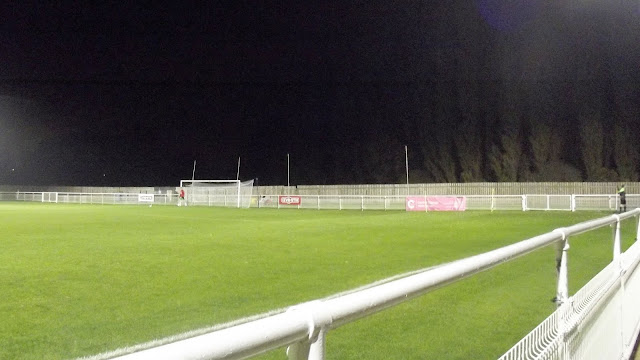 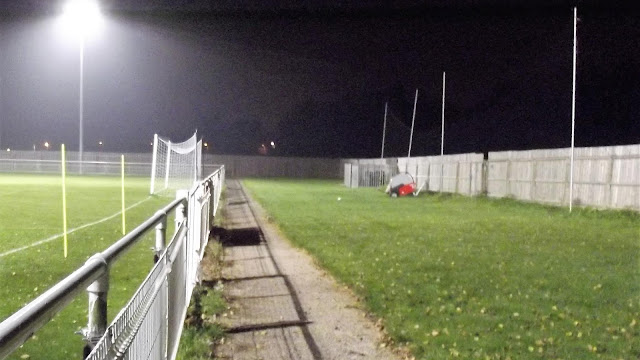 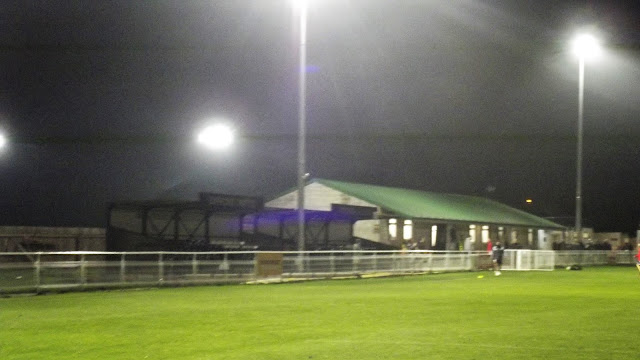 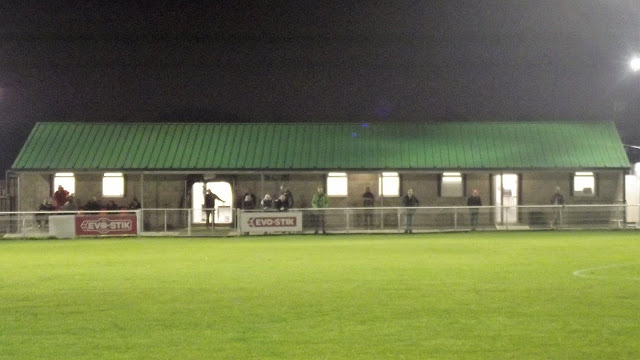 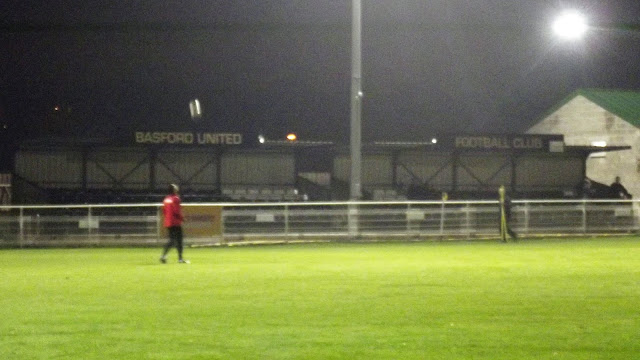 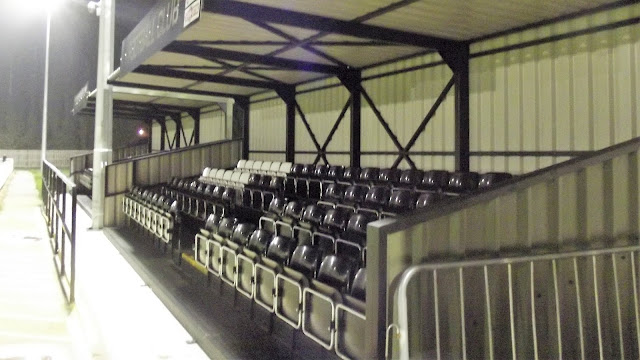 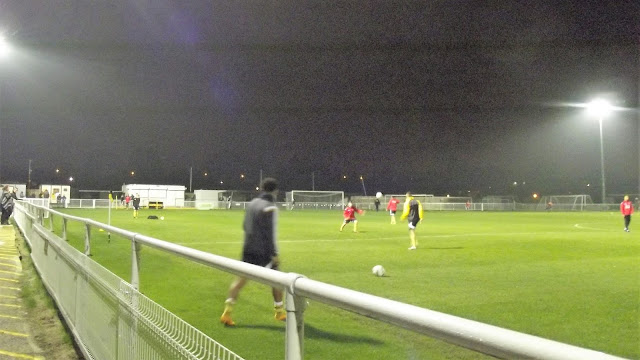 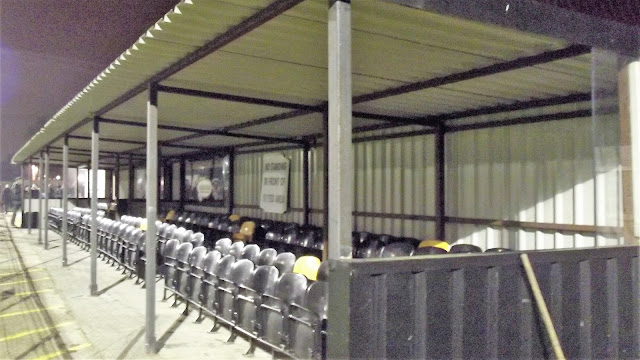 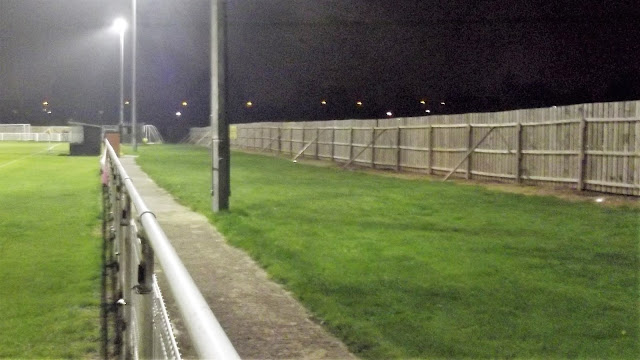 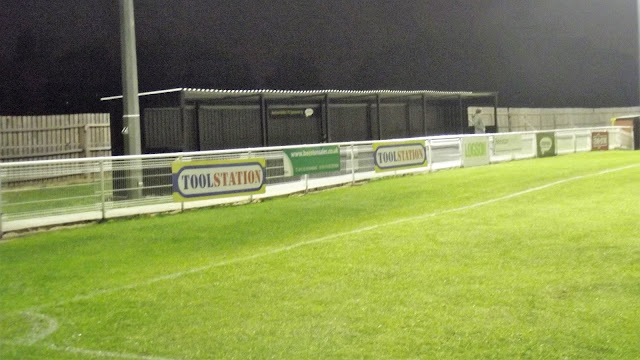