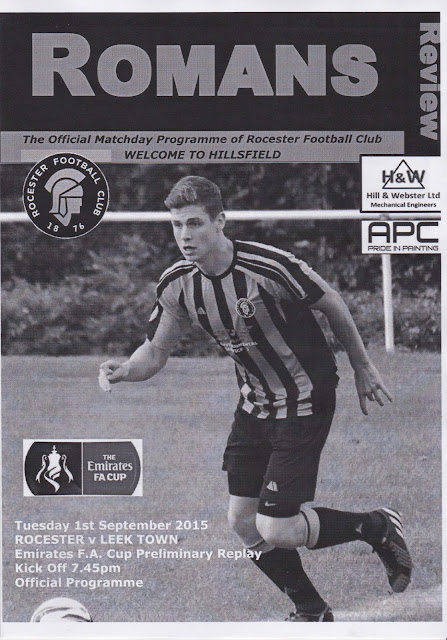 Rocester FC was founded in 1876. For over a century they stuck to local leagues, joining the Staffordshire League in 1984. After finishing 5th in their first season, they won the title 2 seasons in a row. The second time they won promotion to the West Midlands Regional League Division 1. Not stopping there, they were champions for the 3rd time in a row, getting promoted to the WMRL Premier. They were founder members of the Midland Alliance in 1994 and after doing well, they won the title in 1999. This meant promotion to the Southern League Division 1 West, which at the time was a step 3 league. A best-ever finish of 10th was achieved in 2001.  However, a couple of seasons later they were relegated back to the Midland Alliance. Apart from a disastrous 2004/05 season, they have remained there ever since. That season they were winless and only gained 6 points all season. That bad run continued to the following season and they had to wait till Christmas for their first win, going a huge 67 games without a victory. Unsurprisingly with a record like that, they finished bottom, but things have improved since then. Their best finish since was 5th in 2008 and they finished 12th last season.

In the FA Cup, the best ever season came on 2 occasions. Both involved them reaching the 3rd Qualifying Round but narrow defeats to Bromsgrove Rovers and Kettering Town ended their dreams on each occasion. The 2nd Round of the FA Trophy has been reached twice, but the real success came in 1986/87, their first season in the FA Vase. Despite being drawn at 'home' on 6 out of 7 occasions, they were unable to use their own ground as the facilities were deemed insufficient. So playing at Leek and Eastwood Hanley they had a great run. After beating Blackstones, Blakenall, Hinckley Town, Bradley Rangers, Downham Town and Halesowen Town they succumbed to a 5th Round defeat to Garforth Town. They were cup winners in 2007/08, beating Kidsgrove Athletic to lift the Staffordshire Senior Cup. In terms of players, the most well-known one to me was Tony Hemmings who signed for Wycombe from Northwich Victoria in 1993 and had a couple of useful seasons.

Originally on this day I was planning on going to Holwell Sports v Kirby Muxloe, up in Melton Mowbray, Leicestershire. This was decided on the basis that I would be picking Anwar up from Whipsnade Zoo, as he was planning on going there with his family. Had I elected to pick him up from home, we wouldn't have been able to leave till 6 and therefore our match choice would be limited. It was anyway with those restrictions, but at least we found one near the M1. On the day of the game, however, his day out was cancelled owing to the awful weather. So an alternative was considered, and we both plumped for the tie between Rocester and Leek Town, which had ended in a 1-1 draw at Harrison Park on Saturday. 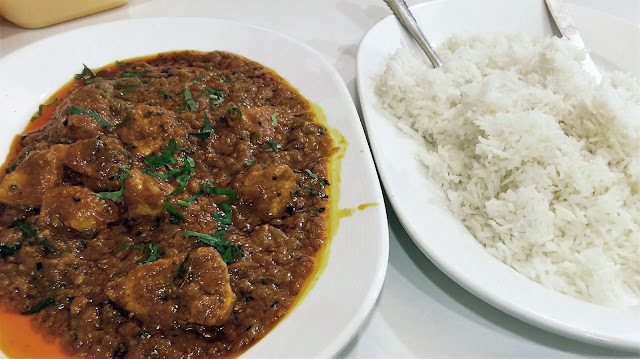 On the day of the game, I was off work. I had a few things to do and after posting a couple of parcels I walked down town to get some things for tonight's game. After coming back I had some lunch and spent the afternoon researching tonight's blog before leaving at 3PM. After stopping for petrol I made my way over to Aylesbury. In the end, I got to Anwar's around 10 minutes earlier than planned so we got a quick getaway. The journey up there was hassle free and we were in Uttoxeter by 6. After a quick look at Uttoxeter Town's Oldfield's ground, we went into the town itself. I found a decent looking takeaway called Grillways and got some North Indian Chilli Chicken with rice. It was absolutely cracking and great value at £6.30 for a decent portion. From there we went onto the ground, which was only 10 minutes drive away. Entry was very reasonable at £6 including a basic programme. Coming into the game Rochester were struggling in the Midland Football League. They had lost all 4 games and it was only Loughborough University keeping them off the bottom of the table. They had got this far by beating Boldmere St Michaels 4-0 in a replay after a 3-3 draw in the initial game. It was Leek Town’s first game in the cup but they had had a mixed season so far with 2 away wins and 2 home defeats in their league games so far. 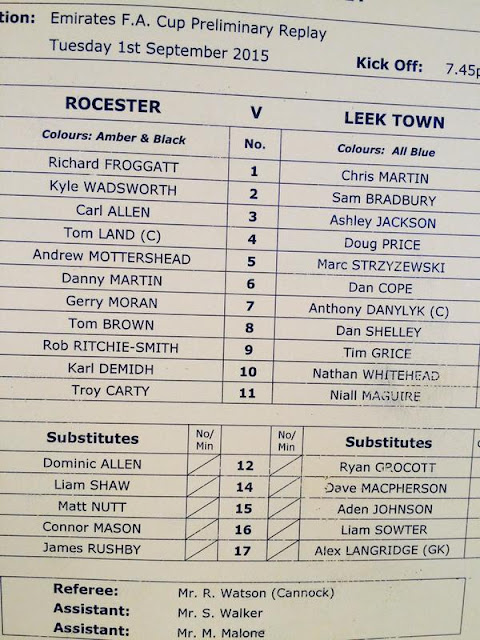 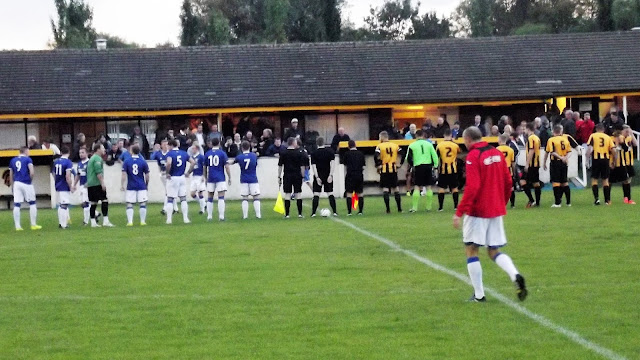 The game started pretty evenly with chances for both sides. If anything Rocester were edging it with them having 2 great chances but narrowly missing on each occasion. Their captain, Tom Land was a right character. When one of the Leek Town players kept going down a bit easily, he started complaining. The captain's response 'If you didn't dive, you wouldn't get f**king smashed'. And to a middle-aged bloke in the crowd who was giving him grief 'If you put your teeth in, I might be able to understand you' The whole team had plenty of character and were playing well above what their results had suggested so far this season. However, it was the visitors who took the lead on 20 minutes, through a well-worked goal. It was a great cross from Nathan Whitehead and Niall Maguire's header was right in the top left-hand corner, making it very difficult for the keeper. The goal seemed to knock the stuffing out of Rocester and Leek started a period of domination. They came close to doubling their lead on 33 minutes when a dipping 25 yard shot from Nathan Whitehead was tipped over by home custodian Richard Froggatt who had been instrumental in taking the first game to a replay. 4 minutes later Rocester came close to getting an equaliser but the striker left it too long to shoot and former Port Vale keeper Chris Martin managed to make a great save and tip the shot round the post. A minute from half time the hosts had a shot tipped over the bar, but the referee awarded only a goal kick. The second half started as the first had finished with Rocester asking all the questions. Karl Demidh, who had been sent off in the original tie was especially tricky and causing problems for the Leek defence. The game died down for quite a while and the next clear cut chance resulted in the visitors doubling their lead. The Rocester players were starting to tire now and perhaps that was why Dan Shelley was let in. Home keeper Froggatt could only get a hand to it and 72 minutes in, the game was all but over, with Leek now having one of their better spells. Even so, Rocester were not done, 77 minutes saw them force Chris Martin into another good save when he tipped a shot round the post. Four minutes from time Rocester got the goal their hard work deserved when they pulled one back from a close-range header. It could have been taken to extra time tight at the death, but the home forward did not make enough contact with the ball and the chance was gone. It had been a pulsating FA Cup game and a pretty even affair. Rocester most certainly didn't look like a side who had lost all 4 league games so far and surely if they can play like they did tonight all season, then they will not be at the bottom of the league for much longer. Leek meanwhile face a home game against another step 5 side in the next round as they face United Counties League outfit Deeping Rangers. It was a good journey home, barring the 30 miles of 50MPH limit roadworks and I dropped Anwar off at 11.45. I got home myself 20 minutes later, staying up for an hour before going to sleep.

HILLSFIELD is a decent step 5 ground. Built around 1987, the main stand has about 250 seats with a reasonable view, though there are some pillars that get in the way sometimes. Opposite is a small area of cover for about 100 fans, plus there is shelter for 50 more near the clubhouse. The rest of the ground is open flat standing, but the whole of the ground is very well kept. The clubhouse offers a reasonable range of drinks at good value, and the tea bar does hot food and drinks including burgers and chips. Near the ground are a couple of takeaways and convenience stores as well as a pub. 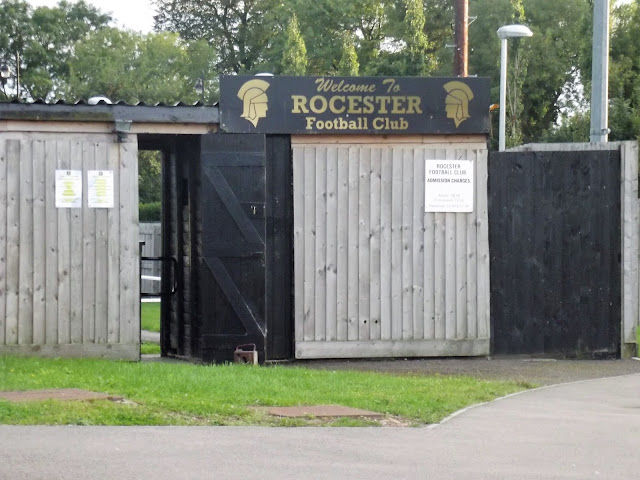 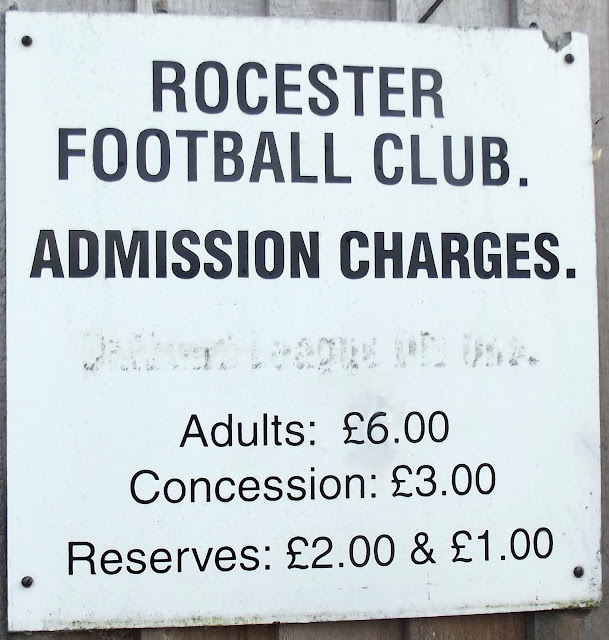 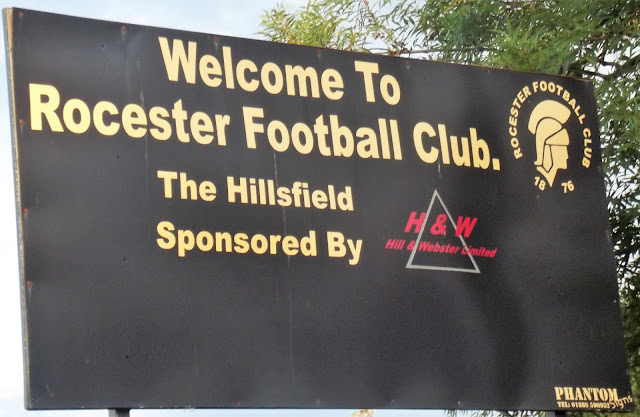 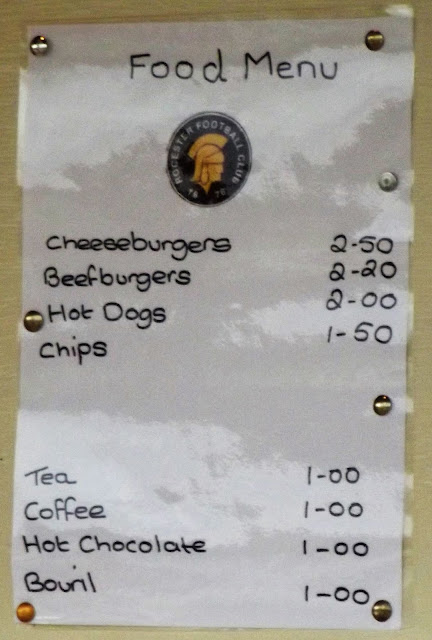 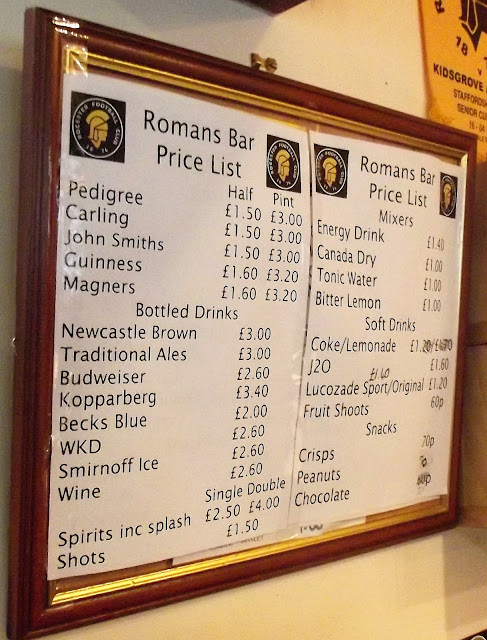 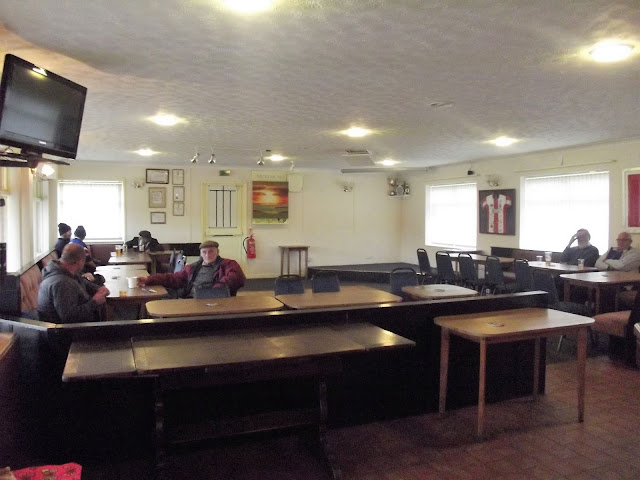 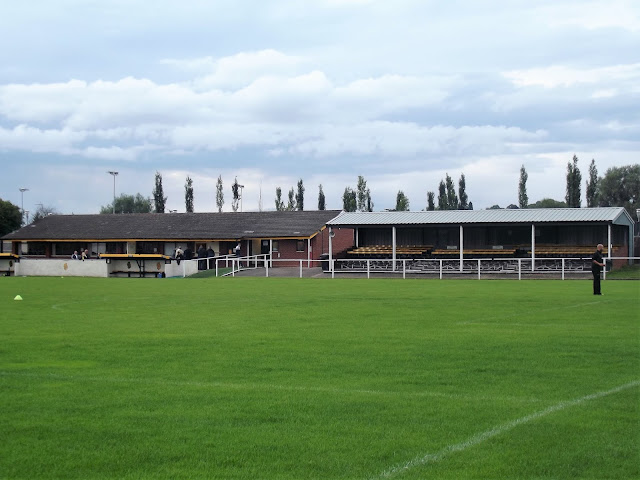 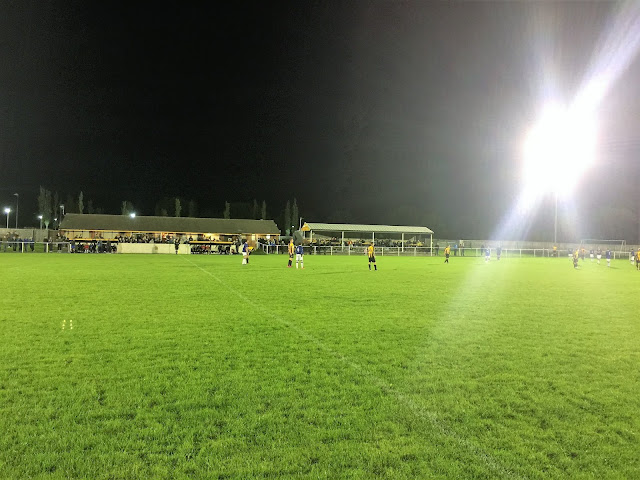 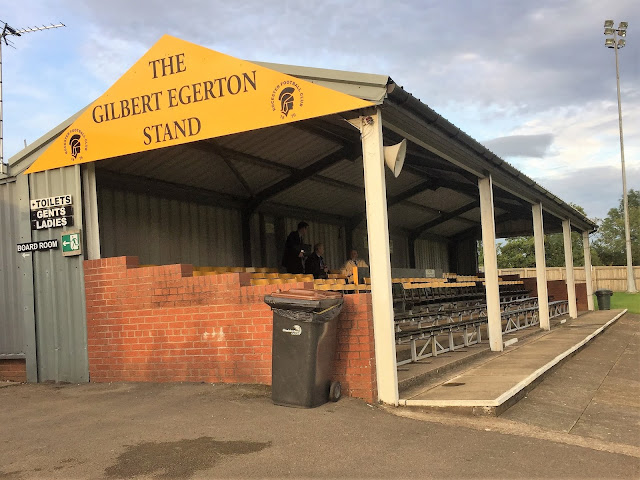 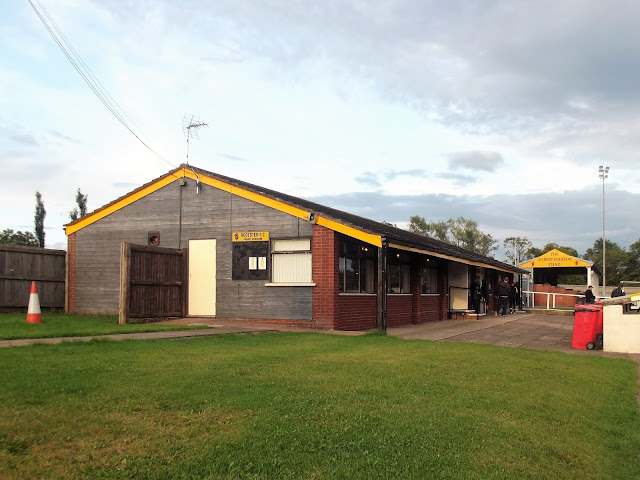 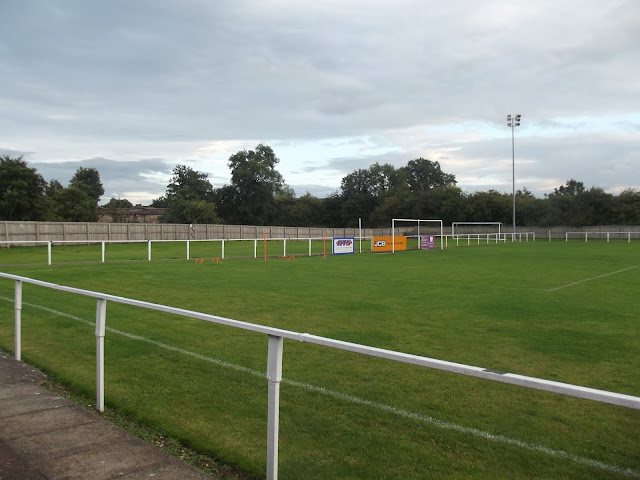 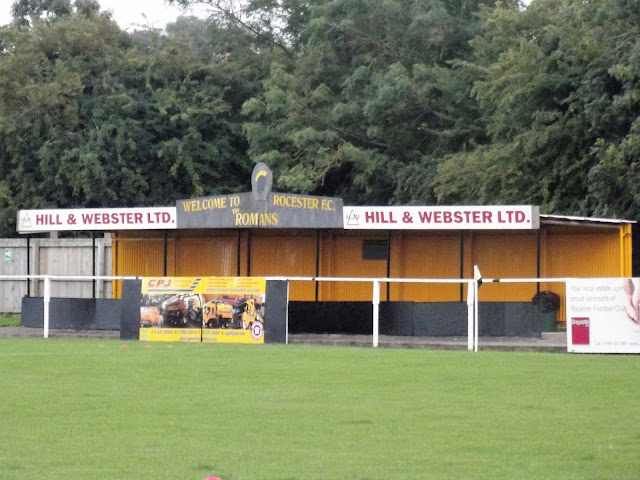 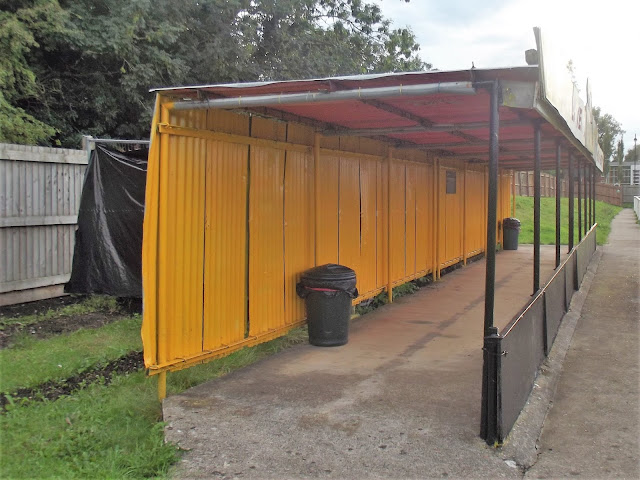 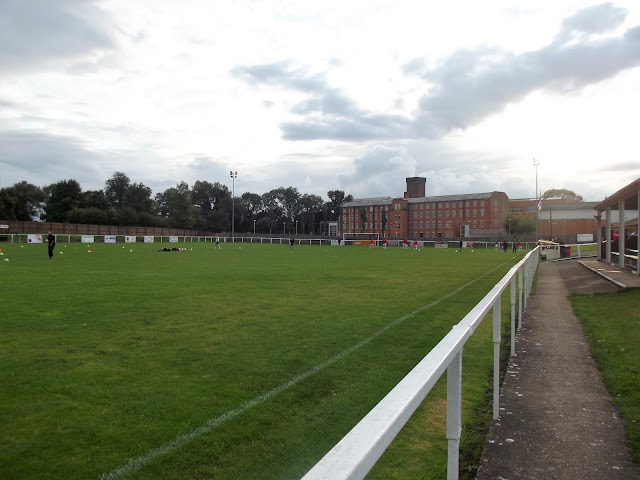 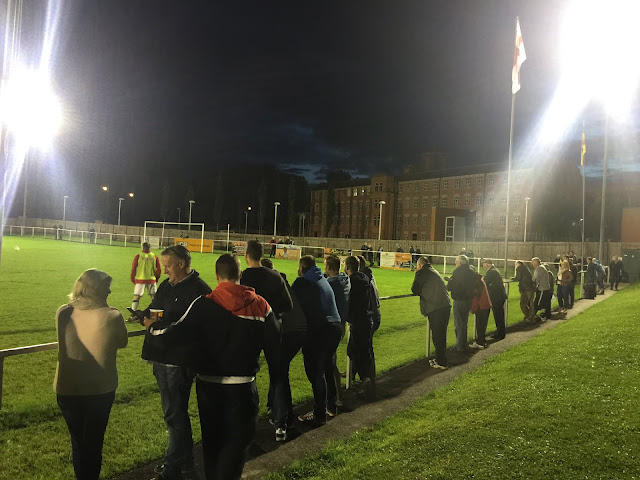