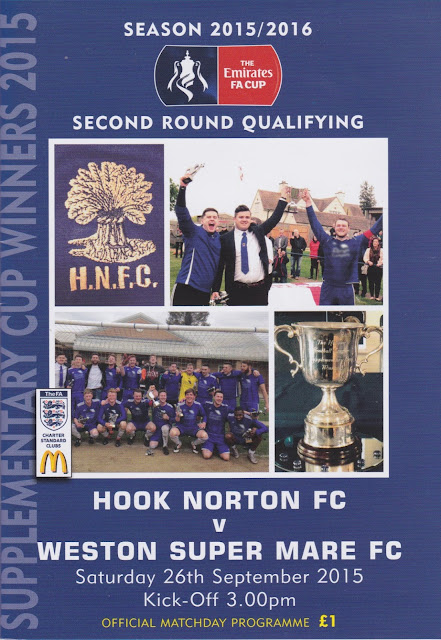 HOOK NORTON FC was founded in 1898 and played in various local leagues before joining the Hellenic League in 2001. Starting in Division 1 West they were champions in their first season and were promoted to the Hellenic Premier. However, they had to groundshare at Banbury United and in their first ever season they had their best ever finish of 12th in that league. Despite this, they finished third bottom the following season and were relegated back down. They had to wait until 2007 for their next promotion, but at least this time they had the facilities in place to use their own ground. This time their adventure lasted 3 seasons before they were relegated once more. They have remained in Division 1 West ever since with their best finish since coming last season when they finished 5th. At the time of kick off they were 9th, but with plenty of games in hand to catch up, due to their cup exploits.

Talking of the FA Cup, this was only their second season in the competition. In their only previous season, they exited at the first hurdle after a 6-1 defeat to Laverstock & Ford. This season had seen them improve greatly. In the Extra Preliminary Round, they thrashed Combined Counties League outfit Frimley Green 5-0. They then faced Southern League Division 1 South & West side Burnham. After a 1-1 draw on their own patch, they appeared to be rank outsiders as they travelled to The Gore. But they stunned their hosts with a 4-2 victory, securing the tie in extra time after home side went down to 9 men. Their reward was a trip to Wessex League side Eastbourne United Association, playing a step above them in the Wessex Premier. In a tight game, they came through 1-0 to set up this game. It was the second highest gap between teams so far in the FA Cup this season, with only Bodmin Town v Bath City beating it by virtue of Weston Super-Mare's lowly league placing.

Hook Norton's best run in the FA Vase came in the 2008/09 season came when they reached the 2nd Round. After beating Fairford Town in a replay, they also disposed of Flackwell Heath. Despite drawing 1-1 against VTFC (now called Sholing) they lost 4-0 in the replay down in Hampshire. The clubs sole cup win came last season when they won the Hellenic League Supplementary Cup. The village itself is probably most famous for its brewery whose beer is sold all over the country and focuses on taste and quality rather than mass production. Sadly as a cider drinker there appeared to be nothing special available on that front for me to sample. 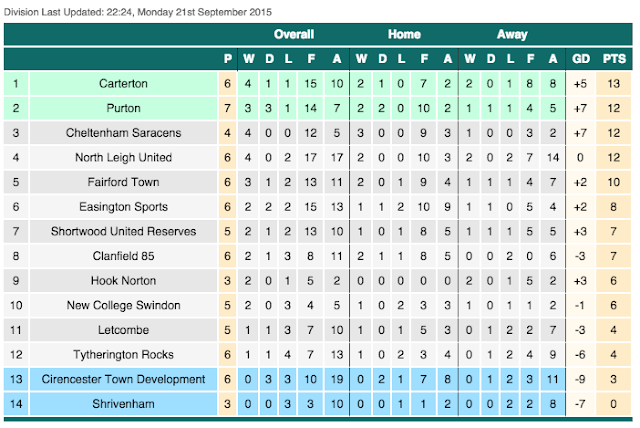 As a keen fan of the FA Cup, I was pretty pleased when Wycombe were scheduled to play at Exeter on 2nd Qualifying Round day. Though I'd consider a revisit to Exeter as I have only been there once and do not have a programme or ticket from there, it would be an expensive day out. So I started looking at the FA Cup ties that had been drawn. In terms of grounds, AFC Fylde or Marine appealed most, but the one tie that stood out for me was step 6 side Hook Norton facing off against struggling step 2 side Weston Super-Mare. There was a brief reconsideration as fellow groundhopper Anwar fancied going to Burnley but the petrol was too much for him on his own. He also turned down a visit to Hook Norton, preferring instead to go to Tooting & Mitcham on the train. At least at 55 miles away it was the shortest possible journey for me, meaning I could eat at home if I wanted to and wouldn't need to spend as much on fuel costs. In the week leading up to the game, I had been really busy at work what with a lot of colleagues being off for Eid. I'd been doing 10 hour days and was pleased when Saturday and my day off came. I spent the Friday evening watching an under 21 game at Wycombe as Porto beat Schalke 1-0. 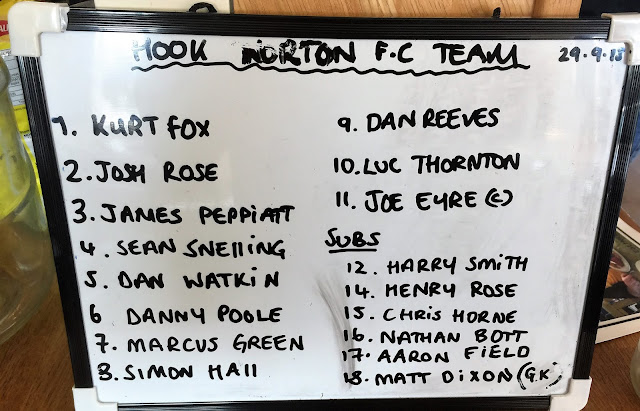 On the day of the game, I woke up really early at 6am. After catching up on the TV I had missed last night I went on my computer for a bit before getting ready and leaving at 11am. It was a fairly decent trip up to Banbury where I stopped and looked around the shops. I bought a few bits from Poundland plus some new ciders from a very good off licence called SH Jones. By the time I'd finished looking around it was getting on for 1.30 and so I made the 20 minute trip across some lovely countryside to the small village of Hook Norton. I paid a bargain £5 entry with a very good glossy programme after parking in the car park around the corner. I went into the ground and went for a pint in the bar. I had a pint of Stowford Press which was a bit steep at £4 a pint but bearing in mind the great value so far I didn't mind too much. I then went outside and had a burger for £2.50 while chatting to fellow hopper Peter. I also chatted to another hopper who is a Wycombe fan. He’d been to a beer festival which had some good ciders and it was only just up the road, so I was disappointed to miss out. I also chatted to some nice people from the club who had seen me interacting with them on Twitter in the week. As kick off was approaching I bagged myself a space near the halfway line as the ground was filling up quickly. 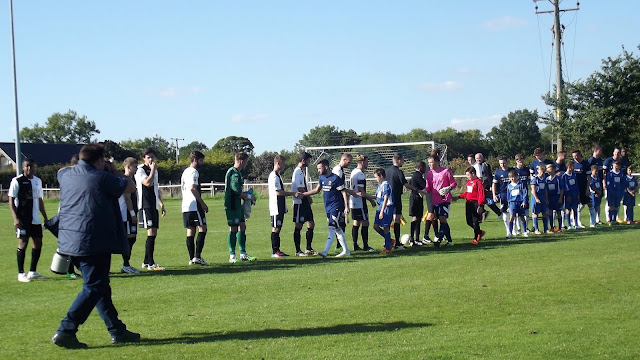 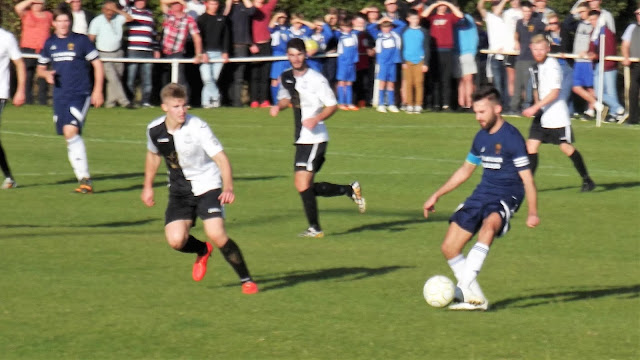 With precisely 100 places between the two sides, this game was the equivalent of Braintree Town playing Manchester City. The report for the game from The Non-League Paper is below. So, a disappointing result for most of the bumper 523 crowd that came. It was a great attendance, smashing their previous best of 244 v Banbury United in the Oxfordshire Senior Cup in 1998. It seemed as if half the village had turned out to give them some enthusiastic support. I was really gutted for a great club and a game that had really lived up to ‘the magic of the FA Cup’ tag. They’d scored a cracking goal and really pushed a side 4 leagues higher to the limit. At least Wycombe had won though, an excellent 2-0 win at Exeter. It was a decent journey home, save for a couple of very slow drivers holding me up before I got on the motorway. I got back at 6.15 and spent the evening chilling before watching Match Of The Day and going to bed just before midnight.

THE BOURNE is a pleasant venue which is probably best visited on a warm day as it’s very open. All the stands are on one side and of the metal ’arena’ type, probably 100ish seats and double that covered standing. The clubhouse is very nice, with Sky & BT and also some real ales from the local Hook Norton Brewery. There is a good choice on cider too, though nothing special. Cans work out the best value as opposed to Stowford Press. They also had a BBQ when I went for food, but no club shop, though I did see mugs & pens advertised. 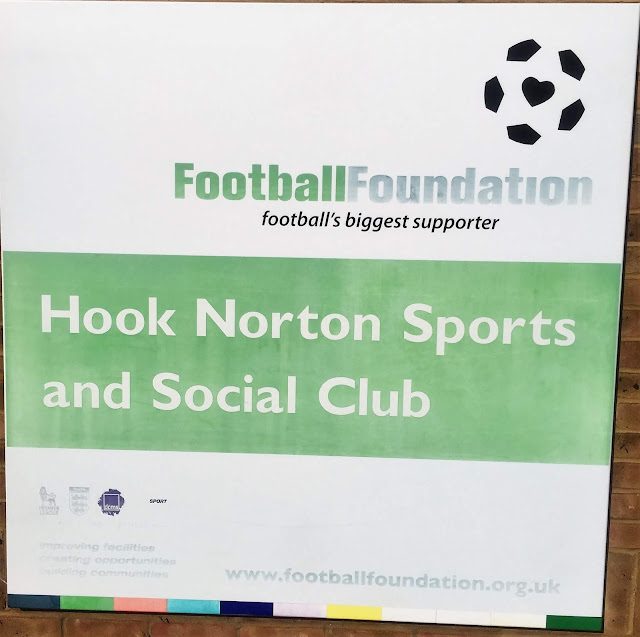 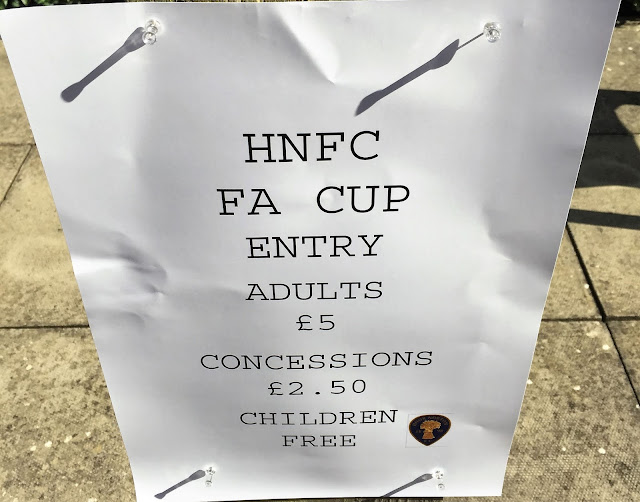 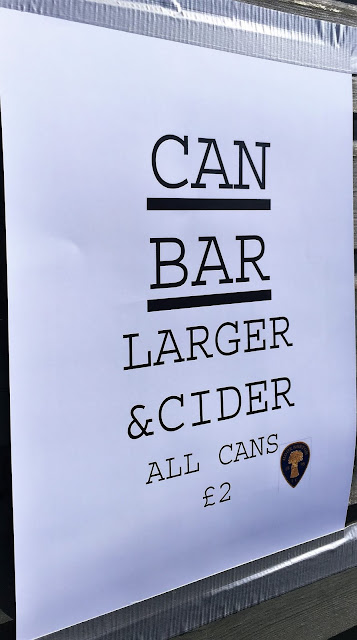 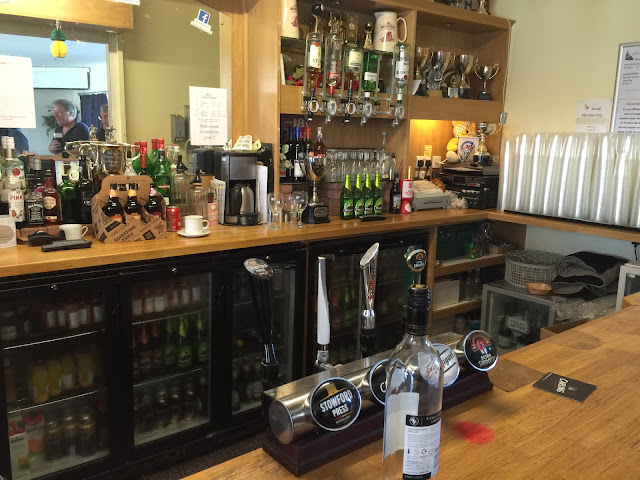 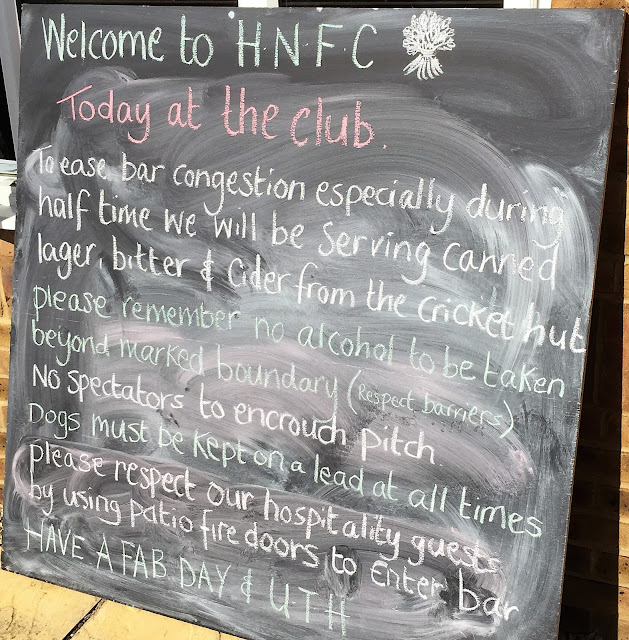 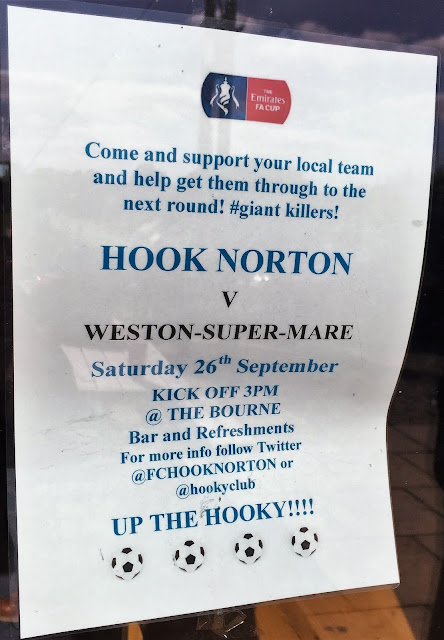 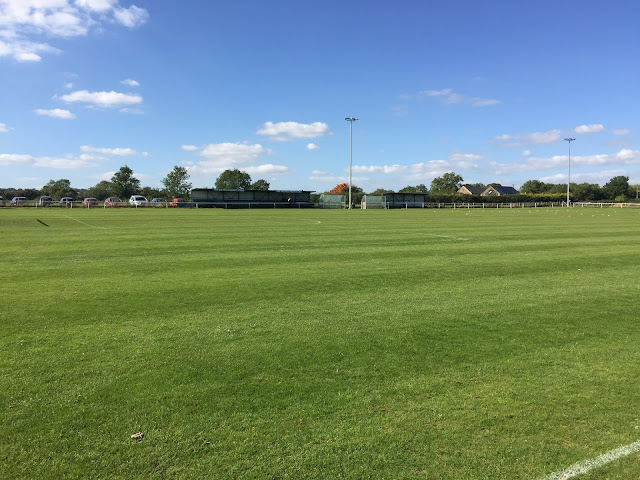 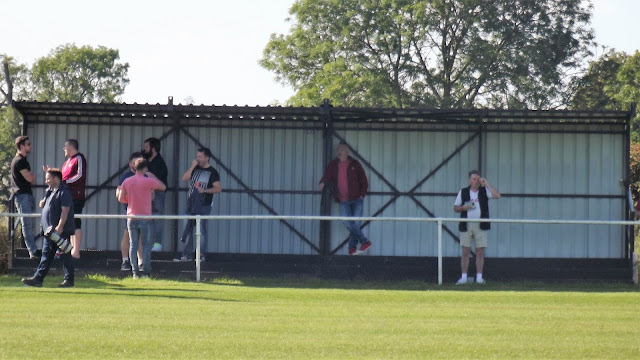 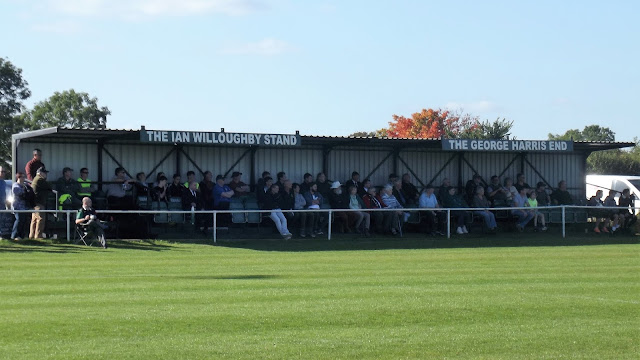 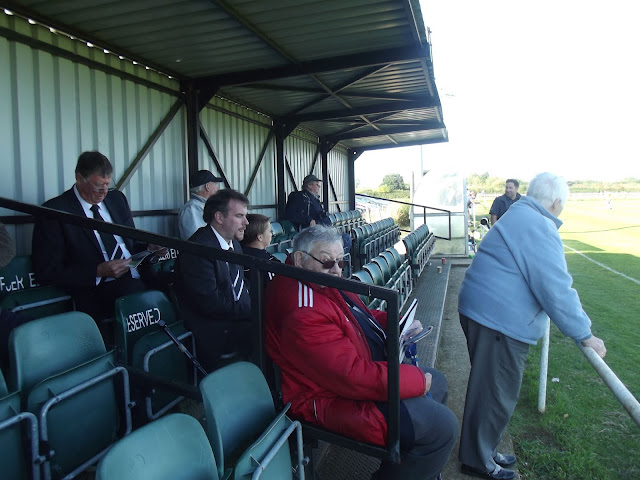 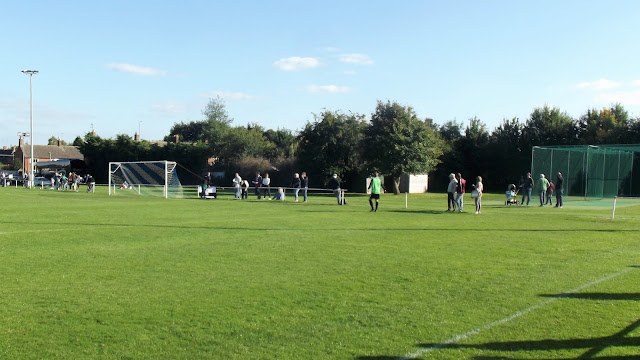 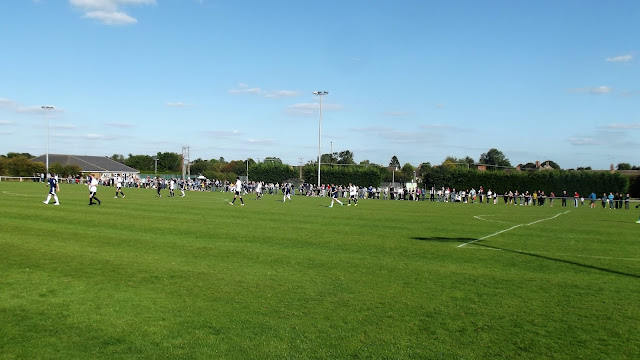 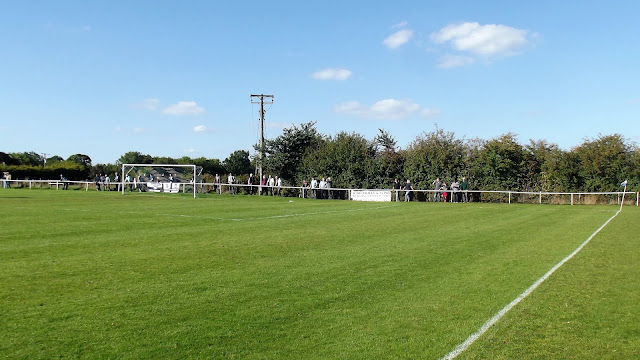 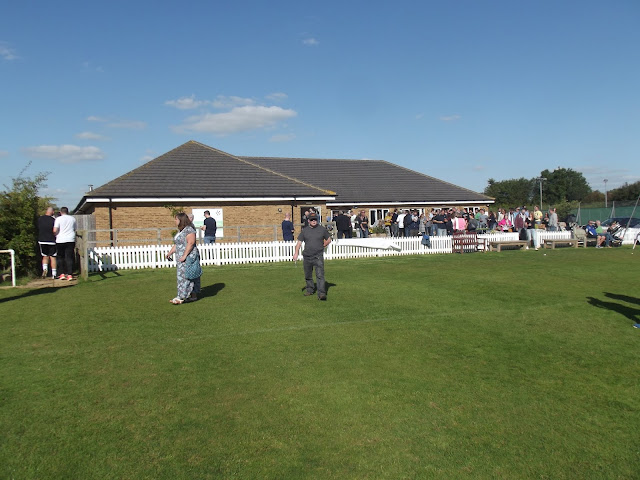 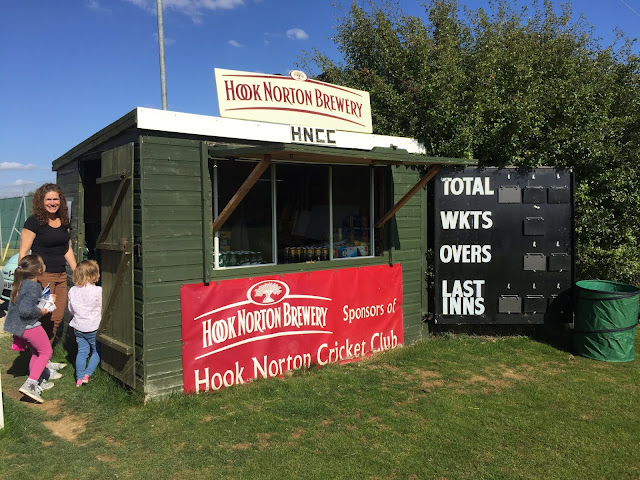