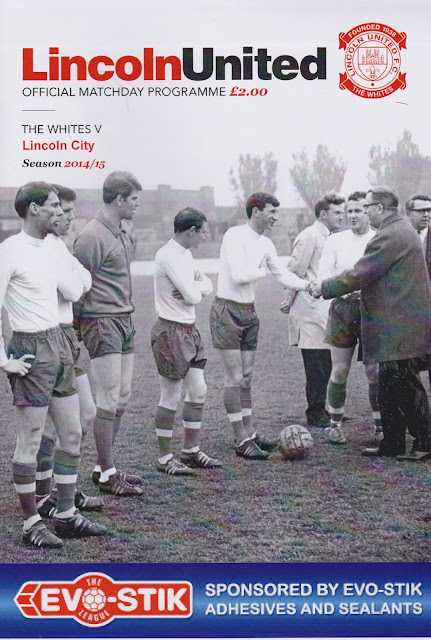 Lincoln United FC was founded in 1938 under the name Lincoln Amateurs. That was until 1951 when they signed a player from Nottingham Forest, thus losing them the right to call themselves amateurs. Following an away game at Sleaford, the players had a brainstorming session and chose the name Lincoln United as their new moniker. They played in the Yorkshire League up until 1982, when they became founder members of the Northern Counties East League. They had many successful seasons at this level, more often than not finishing towards the top of the table in either the NCEL or Central Midlands League. In 1995 they won the NCEL Premier and took promotion to the Northern Premier League Division 1. In 2004 they gained promotion from into the Premier Division and had a 4 season stay there with a record placing of 14th in their first season at their new level. However they mainly struggled and in 2008 were relegated back to the 1st Division, which by now had become regionalised, with the expansion of the league. They were placed in the Division 1 South but have never really looked like going back up, with a series of bottom half finishes, the latest being 17th last season. They have reached the 1st Round of the FA Cup on 2 occasions, losing 7-0 to Huddersfield Town in 1991 and gaining a much more respectable 2-0 loss to Walsall in 1997.

Lincoln as a city is a pretty nice place to visit with plenty of places to eat and drink. They do (or did) decent meat rolls in the club bar should you not wish to take the 10-minute walk into the centre, where there look to be a number of decent pubs, which I will hopefully save for a future visit.  Famous people to hail from the city include actor Jim Broadbent (who played policeman Roy Slater in Only Fools and Horses)  as well as top-flight striker Lee Chapman who enjoyed the best of his career at Leeds United.

After a long and at first, dull summer I was more than happy to get back into the groove as far as football was concerned. I had filled 6 weeks since my last game at Wadham Lodge with not a lot of enthusiasm. There were all the league changes of course, and I was chasing my tail trying to keep up with clubs going pop, and the resultant reprieves and transfers. I had also decided to add the whole of step 6 to my site and with roughly half of it not being on my site I had quite a lot to do. Another thing I had promised myself to do was get fitter and lose a bit of weight. I had accomplished that to a point, losing around 5lbs after running every day. This had to be curtailed somewhat due to a bruise on my heel for the last week of the football famine, which was a shame as I was enjoying it and it was a new obsession to stick to during the close season. In fact, it turned out to be more than that, with an inflammation caused by too much jogging, which could be with me for some time, so I will have to knock it on the head for the foreseeable future which is a shame, as I was enjoying it.  My other 2 aims were to eat healthier, so I had cut down the snacks. The third aim was to drink less, well 2 out of 3 ain't bad, and I was still being fairly sensible in any case. Football wise the World Cup had been one and luckily it had been one of the best tournaments ever, certainly the best since my first World Cup in 1994. There had been plenty of goals and although England gained only a single point, our performances had been streets ahead of the dross that had been served up in South Africa 4 years previously. There was the usual media hyperbole calling for Hodgson's head, but unless we can get Brendan Rogers in then I feel he is the best man for the job. 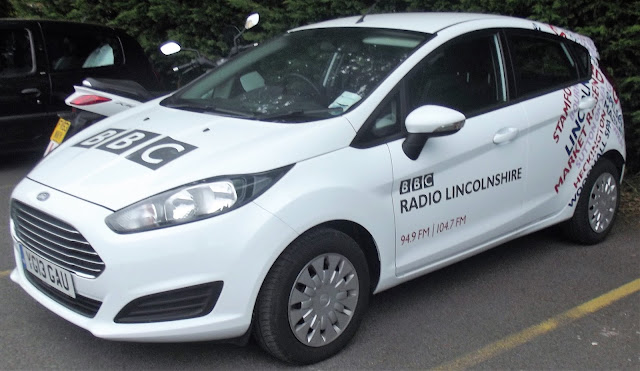 On the day of the game, I was at work as usual. Friday's are a right pig at my work, being the busiest day of the week, which results in a long and hard shift. Not the thing you want when you are wanting to wind down for your day off on Saturday, but it pays the bills, so I will just have to grin and bear it. It wasn't too bad in the end. The day started off by some lass telling us all that she'd had a dream about being chased by a giant Angela Merkel (the German chancellor) which was most amusing. Normally my dreams consist of football, mates and pubs, much like my life. In any case, it was a pretty easy day and I was only stuck there till 12.45, about an hour earlier than usual. I went home, had a bath and had lunch, as well as chilling and checking out the latest on the internet. I left just after 3 in scorching hot sunshine, picking Anwar up in Aylesbury at 3.30. He had to go to a fishing shop to get a few bits and bobs and it was around 4.10 before we were on our way. Traffic was slow getting out of Aylesbury, and then again in patches on the M1, but as soon as we got on the A46 at Leicester, it was pretty easy going. We got to Lincoln at just before 7, and as I had time to spare, I went into the bar. It was pretty decent, with big screens showing the aftermath of the World Cup game, where Germany had beaten France 1-0. They had a decent selection of drinks, including real ale from Lincoln. As for cider heads like me, it was something different to the norm, in Symonds Cider. I'd not had a pint of that particular cider for a while and it tasted all the better for the bargain price of £2 a pint. I went into the ground at 7.20, again for a wallet-friendly price of £5. I got a programme for £1. As it was a pre-season issue, it wasn't up to much though, but nice to have as a memento. I then got another good deal - a Lincoln United mug for £1.20, which will come in useful to store my ever-growing football pen collection. After taking some pictures of the ground, I settled down with Anwar for the game. As it was raining by now, we took shelter behind the goal for the first half of the game.

It was a typical pre-season game really, with neither side finding much rhythm. The home side actually started really well and they took a deserved lead on 27 minutes. There was a foul in the area by Hollingsworth and Danny Brooks stepped up to give United the lead. Gradually City took control of the game and it was all square on 37 minutes when Alan Power scored after a good cut back. It was 2-1 to the Conference side on 42 minutes with the best goal of the game. After some neat play, it was Nolan who finished from distance to make it 2-1 at the interval. A third was added in the second half with Tom Miller scoring 15 minutes from time. United rallied late on, but were unable to reduce the arrears. Though it hadn't been an amazing game, it was manna from heaven from the 650 football starved souls in attendance. As well as myself and Anwar, there were a number of hoppers in attendance, including John Main, who I have talked to before on Facebook and whom we had a good chat to. As Anwar was on Ramadan, I had elected to wait till after the game for my food and I enjoyed the Curry Sauce, Spring Roll and Chips that we had for £2.60 from Kites Chinese Takeaway on the edge of the city. We didn't get home till half midnight, thanks to multiple road closures and roadworks, but overall it was well worth the hassle.

ASHBY AVENUE is an excellent ground for step 4, with cover on all 4 sides. On the side where you come in, there is a covered flat standing area behind the goal. This also houses the dressing rooms and other facilities. The opposite end is pretty much the same, mins the mesh fencing. To the left is a seated stand, holding around 250. Completing the ground is another covered area, this also has a press box above the dugouts.

The other facilities are good. The clubhouse is outside the ground and is shared with the cricket club, but it offers great value and choice. The same can be said of the well stocked club shop which has old books and programmes as well. I didn't use the tea bar or BBQ, but they looked good enough. All in all, a good day out with friendly people running the club and close enough to the city centre to make a day of it. 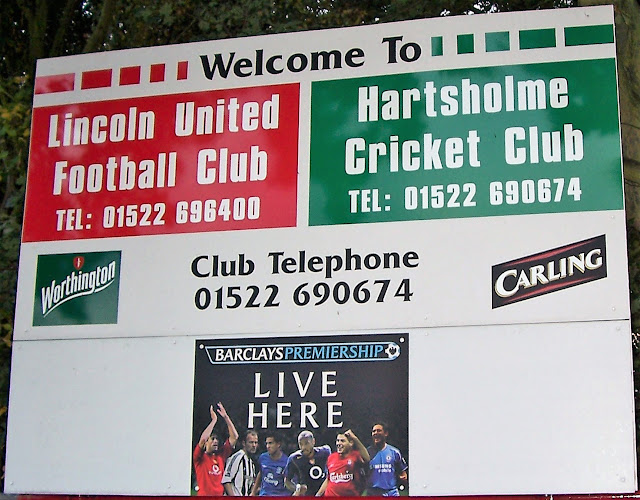 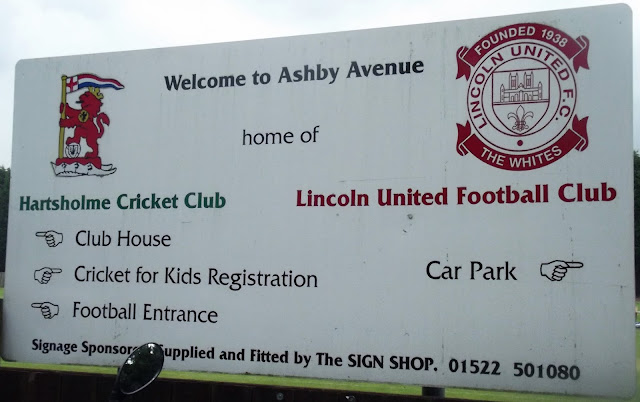 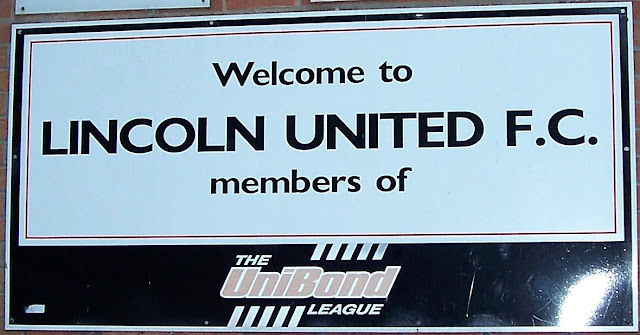 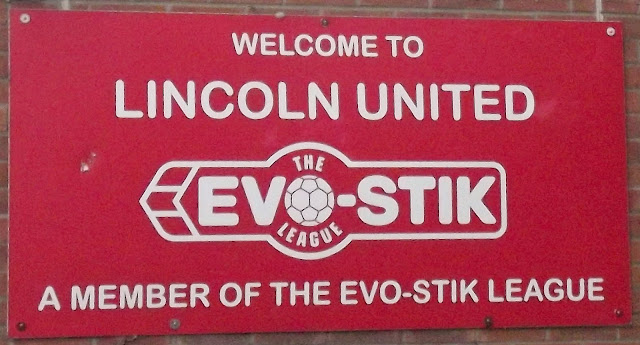 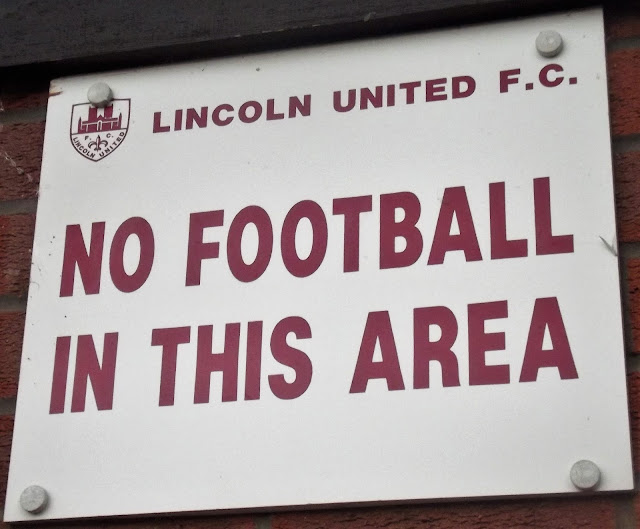 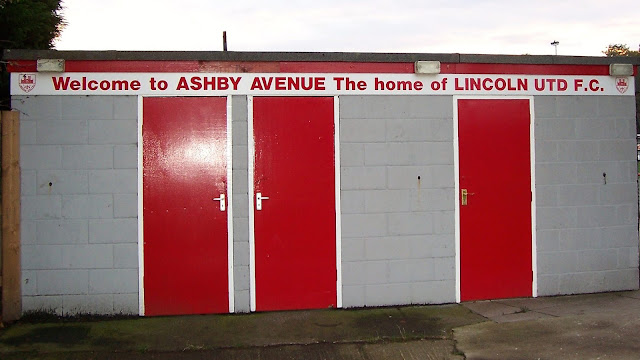 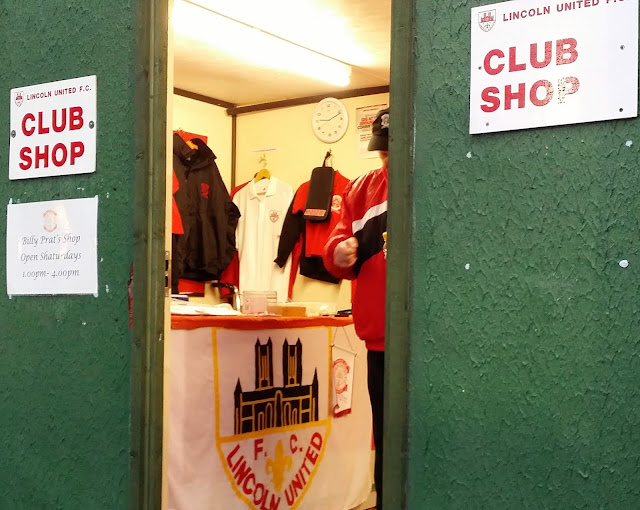 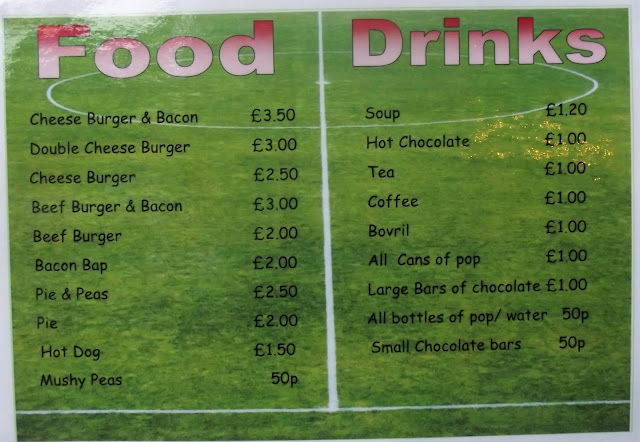 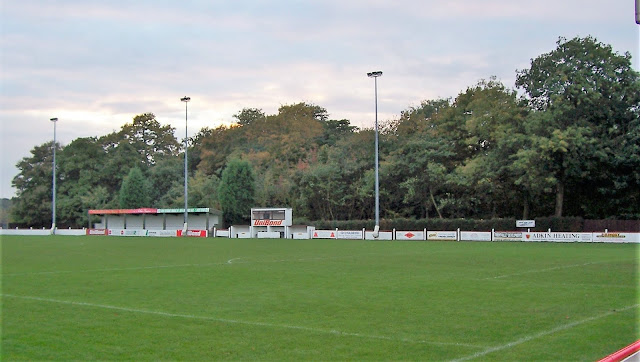 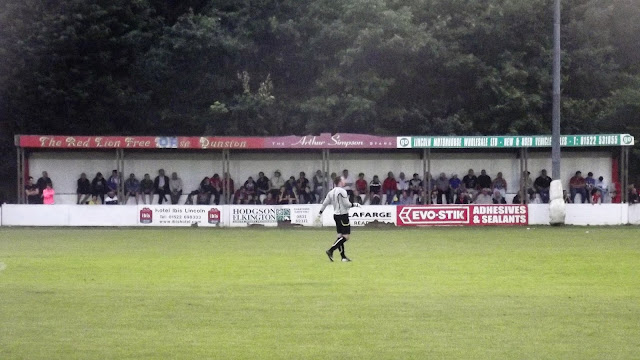 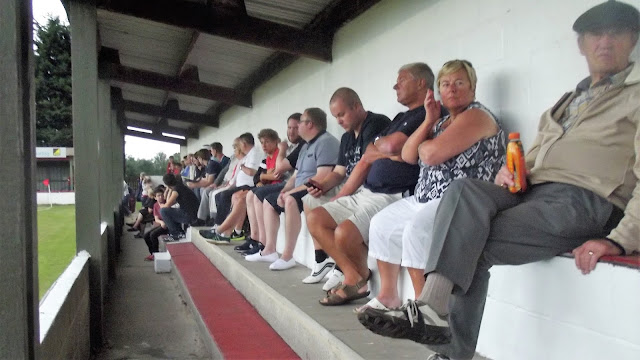 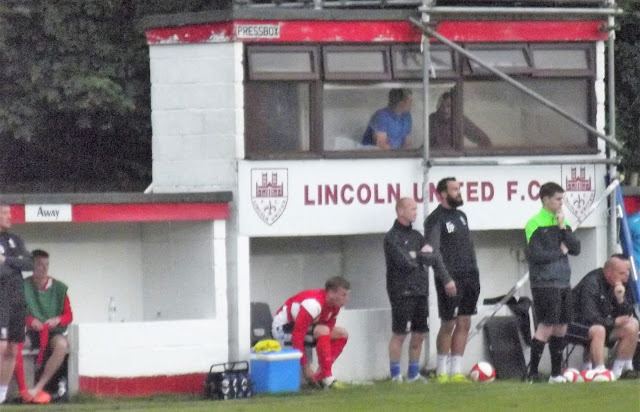 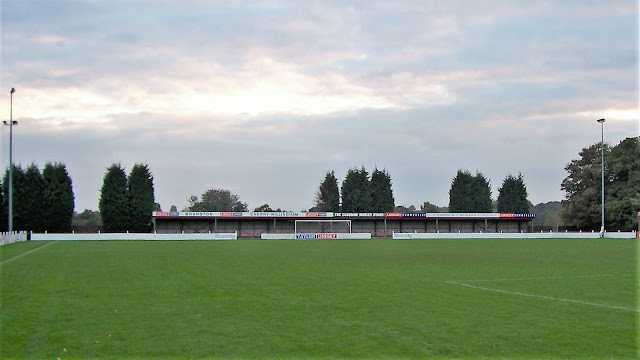 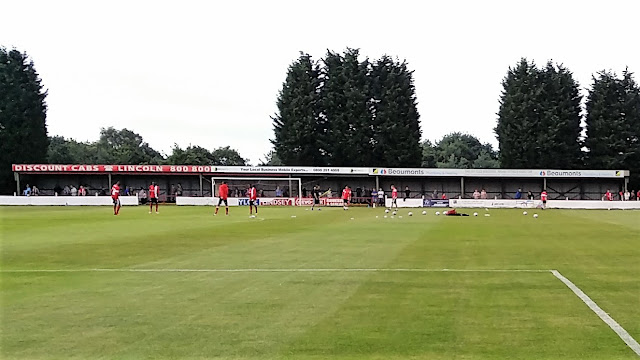 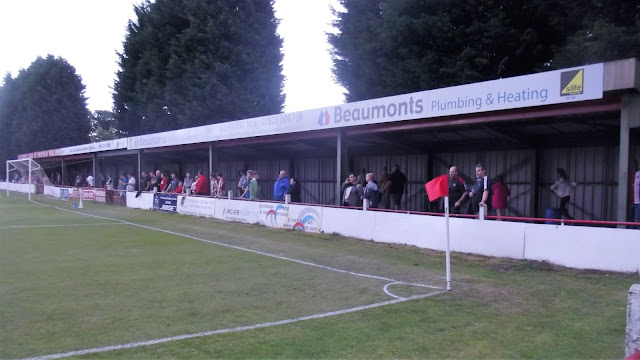 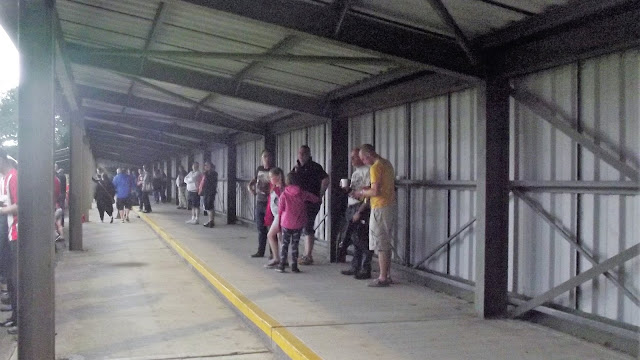 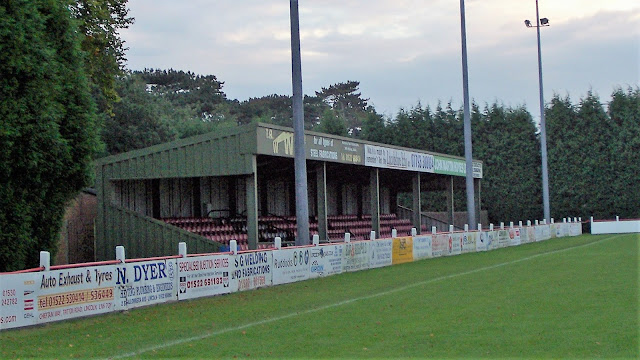 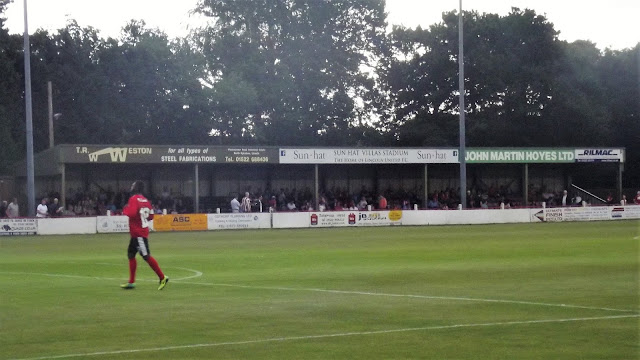 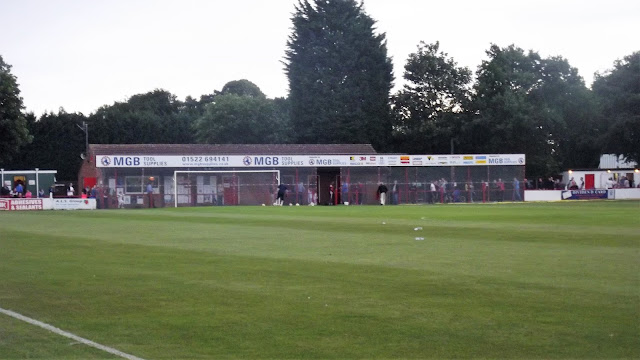 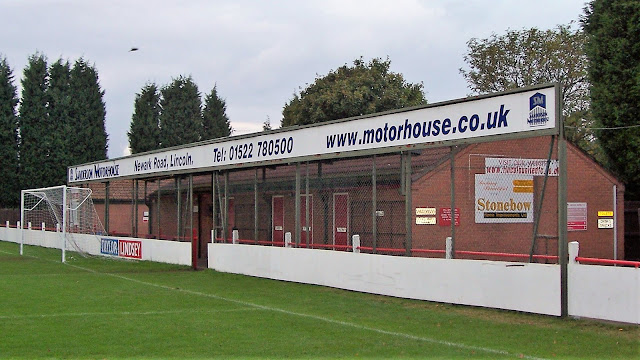 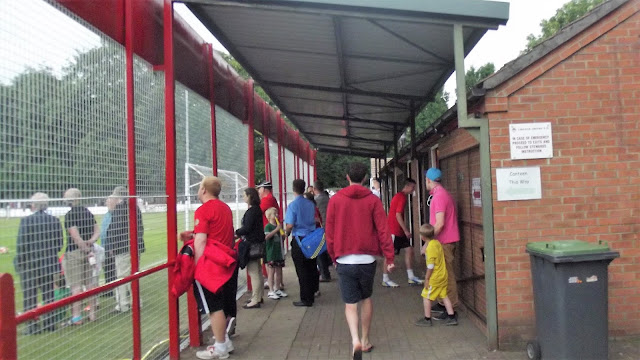