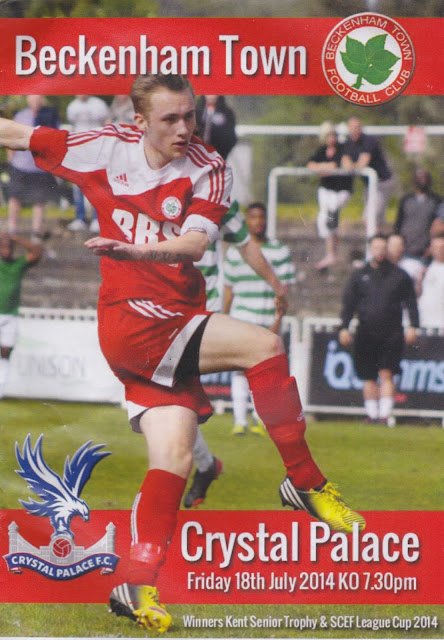 Beckenham Town FC in their current form was founded in 1971. They moved to their current home at Eden Park in 1980. Recently they have smartened up their home, and amongst other things, the main stand contains seats from the one of the now defunct Olympic Venues used in the London 2012 events. They joined the Kent League in 1982 and have been in its top tier ever since. A best-ever second-placed finish was achieved in 2006, with only Maidstone United confirming their win on the last day of the season, by a margin of 2 points. They have reached the FA Cup 2nd Qualifying Round on 3 occasions, taking Worthing to a replay in 2011 in the most recent one. They reached the FA Vase 3rd Round two seasons in a row in 2010 and 2011, losing out to Kings Lynn on the latter occasion. Undoubtedly their most famous player was former England and Spurs player Teddy Sheringham. Also part of Manchester United's treble-winning squad of 1999, the striker signed and was due to play in the club's 2009 FA Vase Campaign, but he went back on his word, although it did at least give the club some publicity.

As with most club of league status, there is plenty of information on Crystal Palace on the internet and in the wider world. So instead I will focus on their connections with my team, Wycombe Wanderers. A few players like Lewwis Spence and Richard Harris have joined us from Palace's youth team and been largely unimpressive. As well as that, John Salako played for us in a summer tournament in Ibiza and a few friendlies as well. But the most famous case was Alan Smith, who replaced the great Marin O'Neill as Manager, just before the start of the 1995/96 season. I and imagine lots of other Wycombe supporters were excited to see what the man who had recently taken Crystal Palace to 2 cup semi-finals could do with a very talented Wycombe squad. 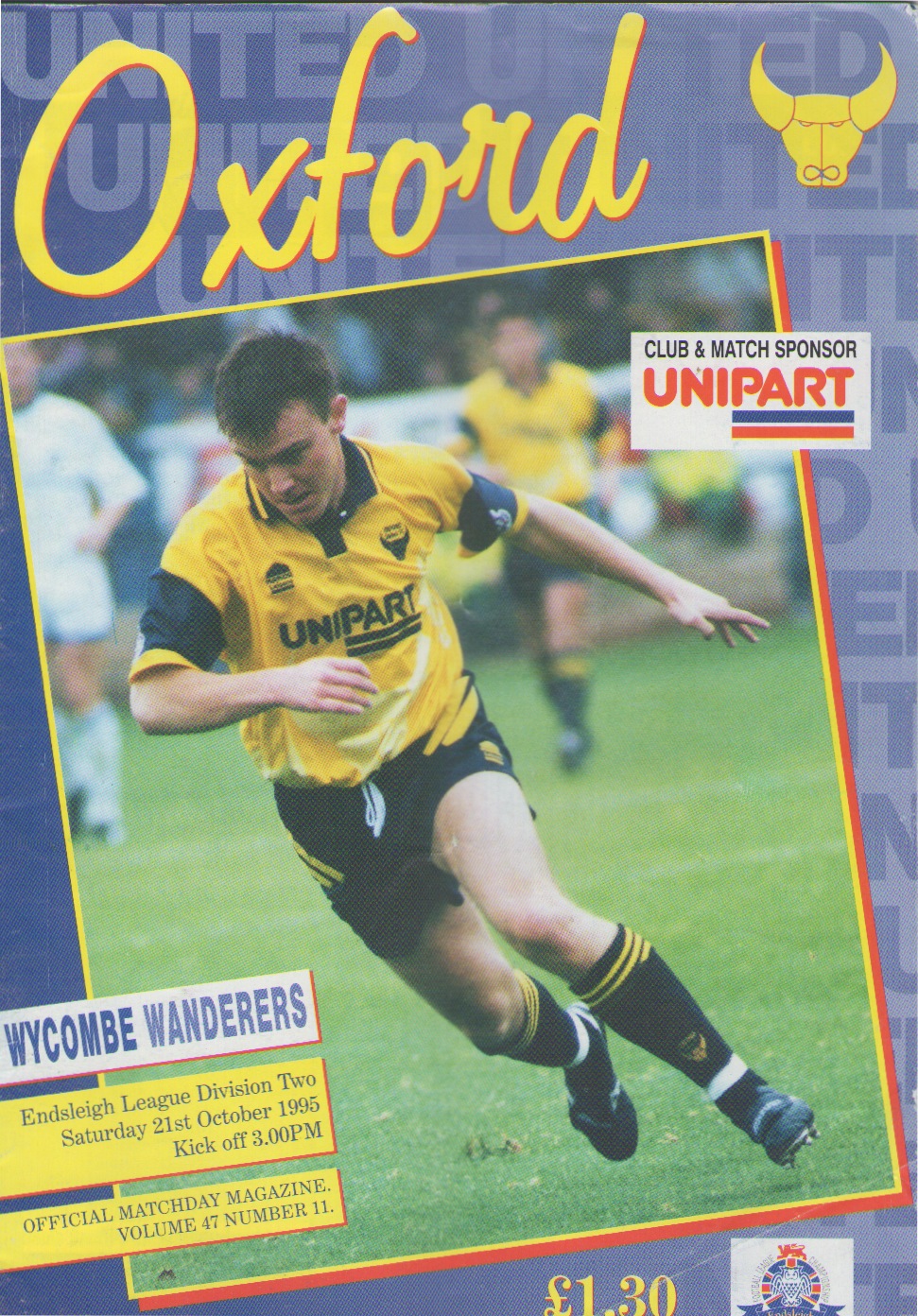 He was a PR dream in the early days at the club, taking the time to come to the fan day and signing no shortage of pictures for the fans. The results were not too bad at first either, I remember us being up there amongst the front-runners in Division 2 (League 1) for the first few months, and there was a memorable 4-1 win over local rivals Oxford United at their Manor Ground. But behind all that facade, things were not well. We started the season having 5 players sent off in our first 5 games and a series of fans favourites were booted out of the club and replaced by exceptionally mediocre replacements. During a 5-0 defeat at Walsall, Smith ordered the half time team talk to be held out on the pitch, and he alienated the fans to such an extent that attendances halved to under 3000. The kit was changed to a disgusting combination of striped and red lines, and the start to the 1996-97 season was just as bad, in fact, the worst in 89 years at Wycombe. Finally, on the 30th September 1996, Smith was sacked after 14 months in charge,  following a 6-3 defeat at Peterborough, after being 3-1 up. The club lost £300,000 during Smith's time at the club, a small amount compared to figures in the Steve Hayes era, but the damage to the team was the most serious, with us never finishing as high as we did under O'Neill and having several periods of severe decline since. 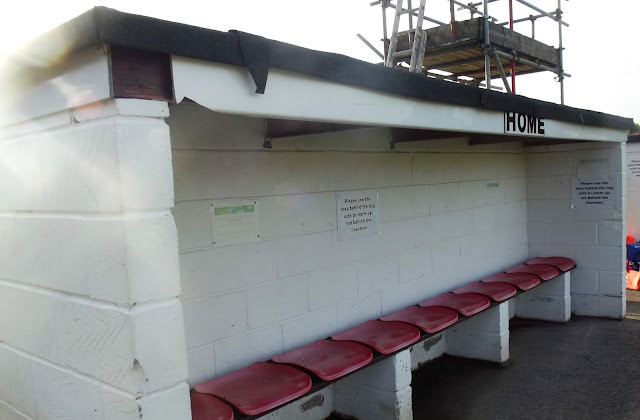 As it was my week off, I was trying to get as many games in as possible. It was also my birthday week off, last year I was not too happy at having to work it. So this year the holiday was reserved back in January, The Friday would be the day of my Birthday too, and so it made perfect sense to spend it doing what I love most - watching football. When I saw that the most appealing fixture was Beckenham Town v Crystal Palace, I made my mind up. I'd spend the day in London on a London Travelcard, visiting Croydon, where lots of retro games shops were, and having a few pints of cider without having to worry about driving till much later. I didn't get much sleep the night before, which was becoming pretty standard as of lately. Still,  I felt Ok once I had been up for a bit and so I had a bath and watched some TV before it was time to leave. I left at around 11.40. Though I was stuck behind a tractor for most of the journey,  it turned out to be a blessing in disguise as I got to my parking place at 12pm, just as the restrictions were ending. I parked up and walked the few minutes to the station in Amersham. 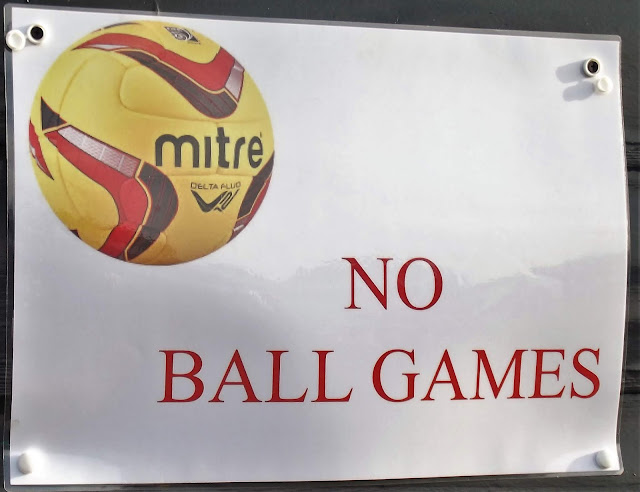 After paying £12.50 for a one-day travel card, I had to wait around 10 minutes for the train and read a paper while it slowly made its way to Finchley Road, the destination of my first train change. From there it was onto London Bridge, before getting a train to Croydon to look around some retro games shops. I was going to stop at London Bridge, for a pint, but the Internet was so slow and pathetic that I couldn't find out if there was a decent pub nearby. I then had to wait for ages for them to decide what platform the train was going to stop at before taking the slow final leg of my journey. I got to Croydon about 2.40 and after stopping at a couple of shops, I was in a Wetherspoons called 'The George'  at 3. Even though they didn't have any of the ciders I needed to complete my list, they did have a Haggis Burger and the retry of Sheppys was fine.  After that pint, life was starting to feel a lot better, after a frustrating start to the trip. I went to a second Wetherspoons called 'Lloyds Number 1' where they did have a cider I needed called 'Somerset Tree Shaker'  which left me with just 4 out of  25 to try with just over a week to go in the cider festival. Last year I missed out on completion by one, hopefully, I will succeed this time. 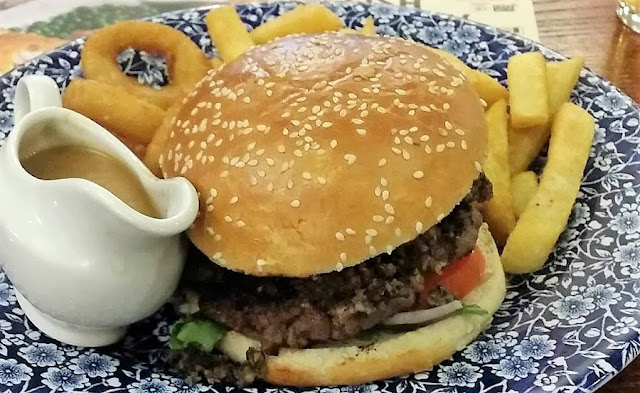 After that I  went to some more shops, buying a Men Behaving Badly DVD and a Red Card game for my PS2. I have a funny feeling that I have the game already,  but at 20p, I bought it on the off chance.  After that, I got some chicken and some Irn Bru and made my way to the tram stop to get to the game. After a change, I arrived at Eden Park, the station for the ground,  just before 6. After seeing that there were no decent pubs nearby,  I attempted to get the bus to a Wetherspoons 2 miles down the road. But the bus driver just drove past ignoring the request stop, so I made do with a pint of Carling Cider in the Toby Carvery near the ground. After that, I  got some chips from the local Chinese takeaway for my dinner and made my way to the ground. It was 6.45 by the time I went in and after buying entrance and a programme I walked around the ground taking pictures, as well as checking Facebook. Two points of note about the game. Firstly the great young fans who sang all game. Palace quite rightly have a reputation for having some of the loudest fans in the Premiership and their youngsters seemed to be getting on some practice to join them.  Secondly, Mishi,  a Dulwich Hamlet fan who I know, gave me something out of his collection for my birthday, namely a picture from our FA Cup semi-final against Liverpool in 2001 and was much appreciated as it seems pretty unique. Towards the end of the game, a storm came over and it rained heavily for about 5 minutes. I got quite damp,  but I didn't really care as I had a good day. After the game I made my way back to the station and after waiting 20 minutes for the train I was on my way. I listened to the Mike Parry and Mike Graham podcast on the way home, getting back to Amersham just before midnight. It was busy on the way home with the train packed on the last leg and I was happy to get home at 12.20 and have a  cider with Coronation Street. 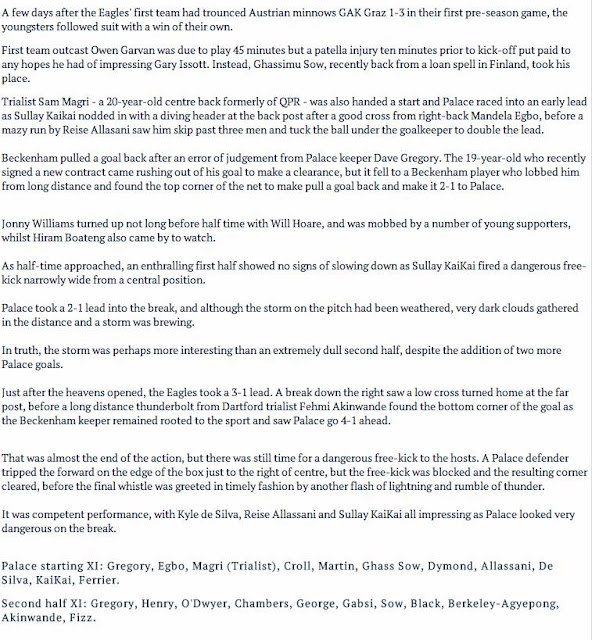 EDEN PARK has seen a few improvements since I visited in 2009, to take pictures on the way to our game at Charlton Athletic. There was only the main stand there at the time, and since my visit, the seats have been upgraded from benches to plastic tip-up seats, formerly of the Olympic complex at Stratford. Also, a new seated stand has been added, as well as a few covered standing areas. The bar at the ground is reasonable by the looks of it, and probably as good as the Toby Carvery across the road (and cheaper no doubt) I didn't try the tea bar, but there were plenty of takeaways nearby, and the Chinese one did a generous portion of nice chips. 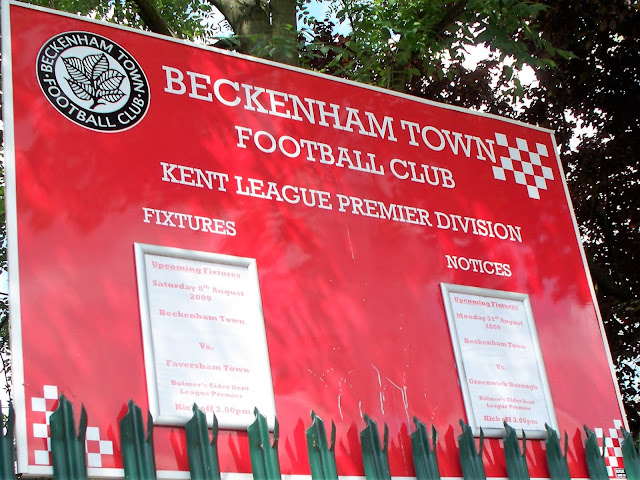 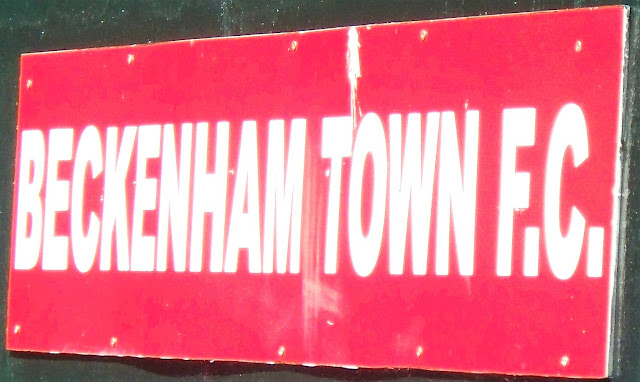 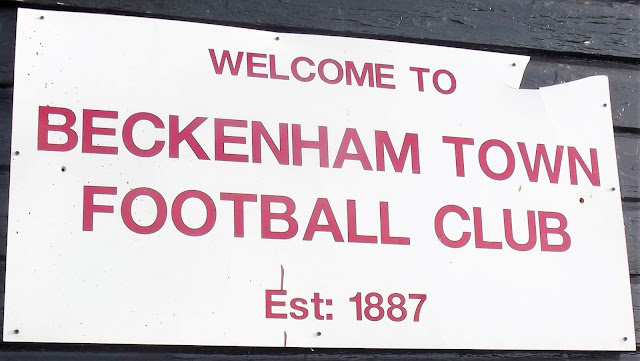 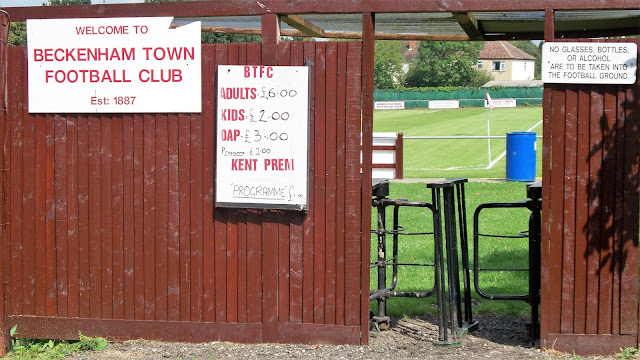 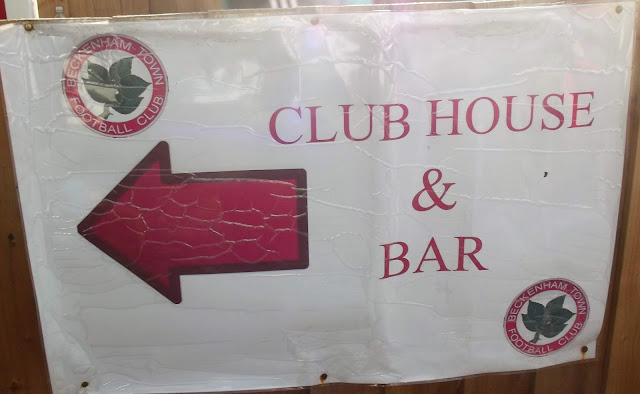 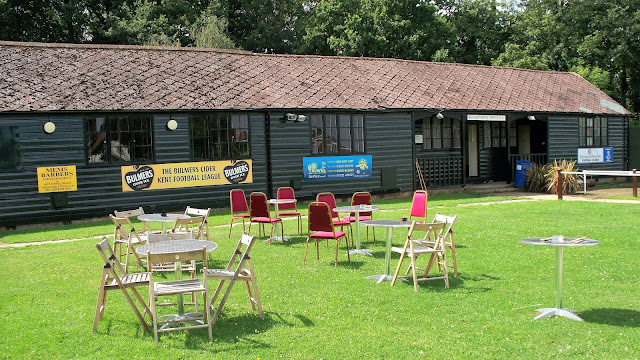 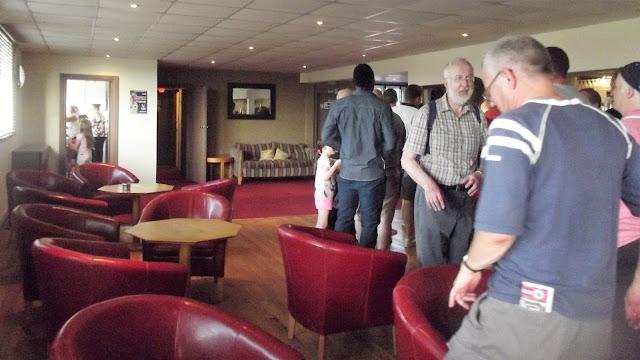 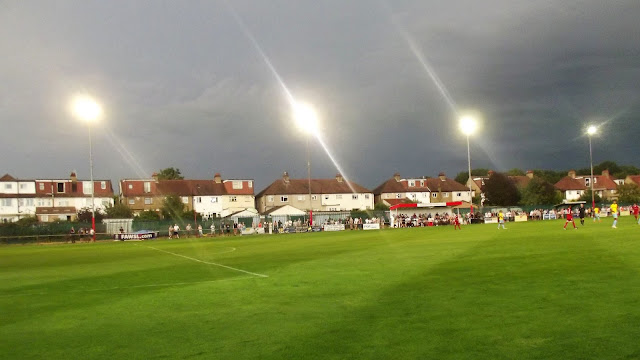 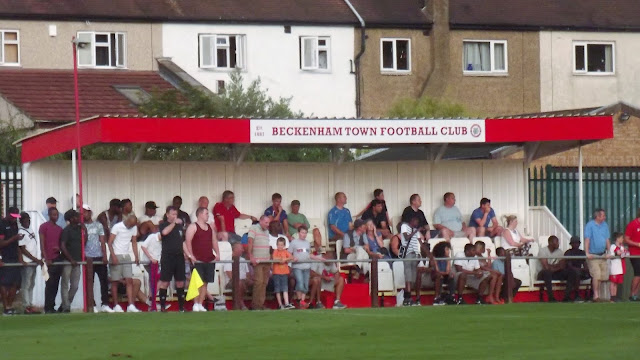 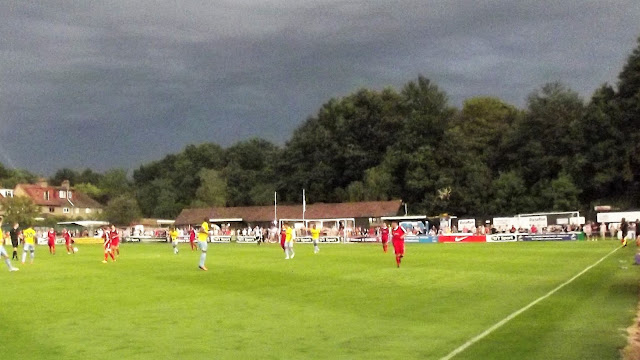 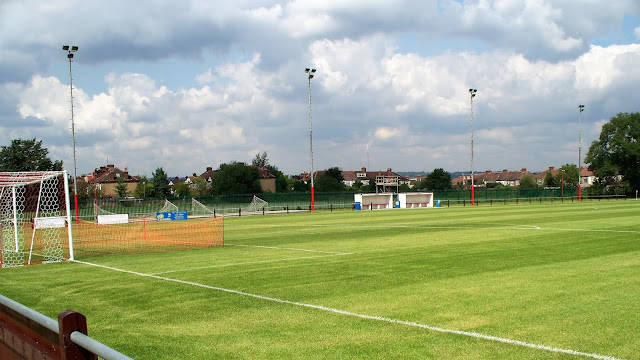 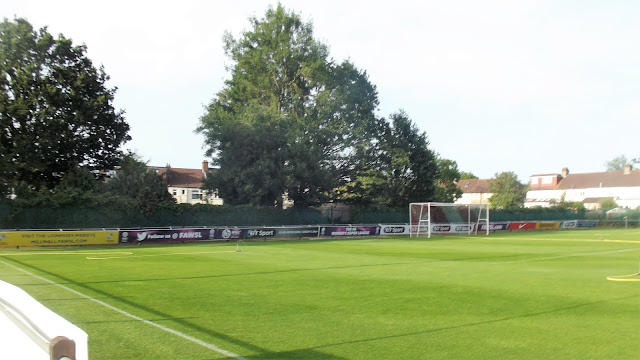