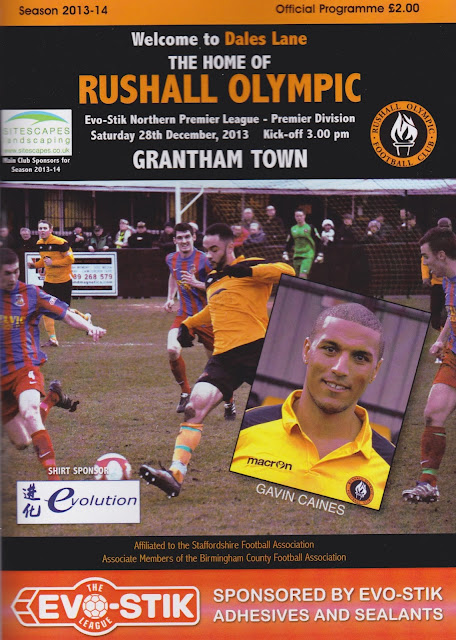 It would be my first time seeing either team, although I had been to both grounds for pictures. When I visited Rushall in 2006 they had only just made it to step 4 of non-league and at the time were in the Southern League D1 Central. Since then they had transferred to the NPL and won promotion to the Premier Division. Before the game, they were in 12th place but were only 4 points of the last playoff place in 5th. They had the well known former football league striker Dele Adebola who had played for Notts Forest, Birmingham City, Hull City and Bristol City amongst others. Grantham was more famous for being the birthplace of former Prime Minister Margaret Thatcher. She was well known for hating football and wasn't ever seen down the South Kesteven Stadium.  They were well established at this level and had flitted between the Southern and NPL Leagues due to their fairly central geographical position. Their most well-known player was Nathan Stanton, who played 8 years for Scunthorpe but I remember him most for looking pretty solid playing for Rochdale against Wycombe.


Despite Wycombe's promising performance and 4-1 win at Northampton whilst I was watching Redditch v St Albans, normal service was resumed against Newport County on Boxing Day and we still have not had a win at home in the league since 12th October. Once again it was a very flat performance with little invention going forward, and it was only a good performance from our back 4 that prevented them having more chances. As it was, the winner for Newport was a really good goal - a great ball from Chapman to Flynn who scored with a delicate chip over Matt Ingram to give the visitors a deserved if unspectacular win. It was the end of my 3 days off from work and though they hadn't been the healthiest, they had been good fun. I had spent the first night chatting online all night to Barrow and Grimsby fans about football, meaning I stayed up for 41 hours until I went to bed at 9PM on Christmas Eve. Then more than a few drinks with the family on Christmas Day with my brother and his girlfriend. Finally, on Boxing Day, a couple more pints before footy, as they were selling them at the reduced price of £2.50. The performance that followed was especially galling as we had to kick off at 12.30, with a strong suspicion that it was due to the players wanting to get off early. They had Christmas Day off, as a reward for the win at Northampton in any case, something agreed before the game, which might have explained while they gave their best performance in a long time. At least I got some nice football related stuff for Christmas - Wycombe's away shirt and autobiographies of former Wycombe player Sergio Torres and John McDermott, who played over 700 games for Grimsby Town. 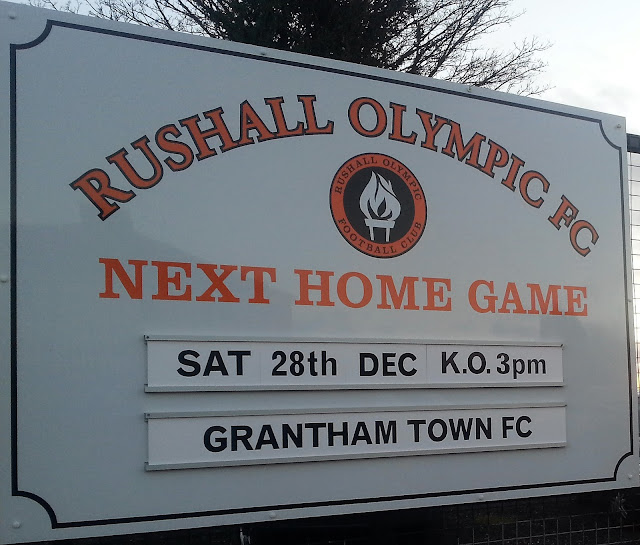 On the day I woke pretty early as my sleeping pattern was still out of kilter what with Christmas and early starts at work merging into one another. I watched Home Alone for the first time in ages, had a bath and then checked Twitter and other sources to see if the game was in any danger of being called off. It wasn't and so I set off just before 11, picking Anwar up at 11.25. After getting petrol we were on our way. The first part of the journey frustratingly slow. We got stuck behind a Tesco lorry that insisted on doing 40MPH in a 60 on a single carriageway road for 13 miles between Aylesbury and Bicester (though to be fair I think he may be obliged to by law) and then it was slow when we got on the M40. Soon enough though, we sped up and were in Walsall at Morrisons at 1.30. We had planned to have lunch in the cafe there. I had checked on the Morrisons site and they assured me it had a Cafe. However it wasn't until I had paid £1 for parking that I discovered there were 2 Morrisons in the town, and this didn't have a Cafe. It was pretty run down store too, with those blue lights in the toilets designed to stop druggies injecting themselves. So with a quid wasted as we stayed there no more than 5 minutes, it was a tiny bit too late to make our way to the other one and so we headed off to the ground instead, hoping to get food there. We got to the ground just before 2PM and went in and got a programme. Everyone was really friendly and welcoming and pleased that someone had come all the way from Wycombe to see their club. I had a look in the club shop and went and got something to eat from the tea bar. Luckily the range was good and the portions pretty decent - I had Sausage and Chips for £2.50 and that did for a meal. I also had a couple of cups of Bovril later on, made better by the fact that you could add pepper to it and make it taste even better. The game was an entertaining affair with plenty of meaty tackles flying in. I have pasted the report from the non-league paper below. 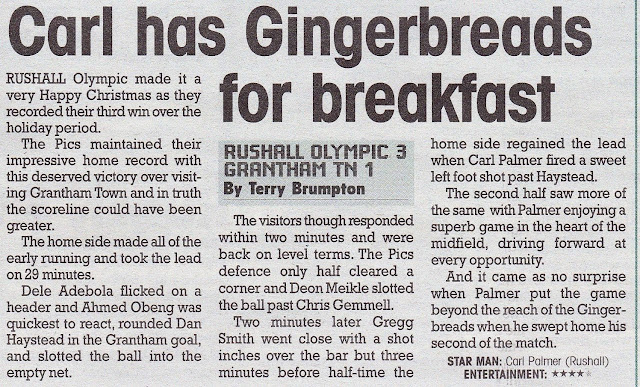 After the game, we made our way back home. My sat nav decided to try and take us back via the rip off M6 Toll so I had to stop and adjust it to save me flushing a fiver down the toilet. It added a bit of time to the trip but even so, we were back in Aylesbury just after 7, and me back home at 7.30. The next day saw another day at work, plus Wycombe at home to Fleetwood, the way we are playing at the moment, I'm not sure which one will be the most enjoyable! 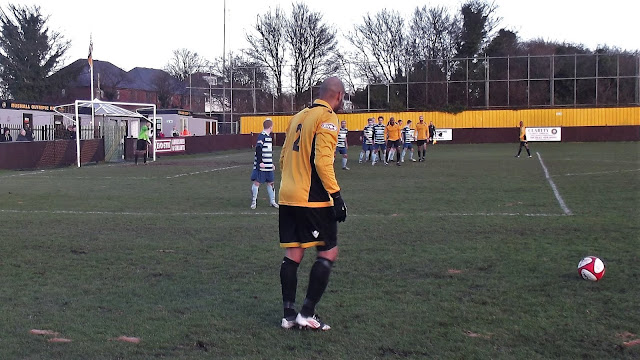 DALES LANE certainly shows signs of originating from a lower league, but I quite liked the ground. The only original stand is a mixture of seating and standing along one side and is painted in the club colours. It has bench seating and covered standing. There have been 3 new stands put up at one end of the ground. Firstly on either side of the pitch at the top end of the ground, there are 2 covered seating stands, each holding around 150. Then there is a small covered area behind the goal, while the rest is open. It didn't look that big to me, but even I was surprised looking on Wikipedia that the official figure quoted is 1400 capacity in total as it looked bigger than that.

As has been mentioned before, the tea bar is excellent, so it's not so much of a pain that there is not a huge amount, food-wise, around the ground. The club shop was excellent too with a wide range of old programmes, though I didn't pick up anything. With no pens and pennants being a fiver, I decided to put away my money as I have hardly any wall space left. The bar was your standard clubhouse drinks wise and like a lot of club bars now, it had the live Premiership football on. And a special mention for the programme too. It was quite well known in non-league circles for being a nice thick one and at £2 provided great value. It was full of stats and other info. In the age of the internet, programmes have transformed into glossy affairs with little substance but this one has plenty to read and it's nicer to look at it that way than sitting down at a computer screen to browse information. 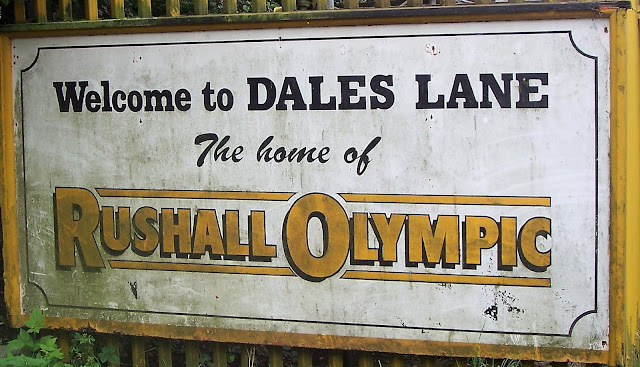 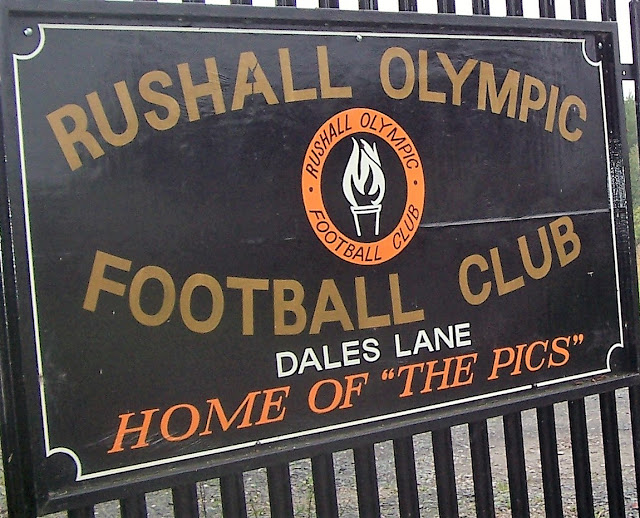 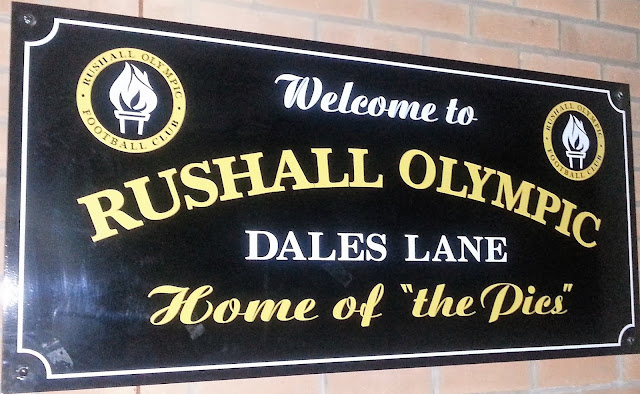 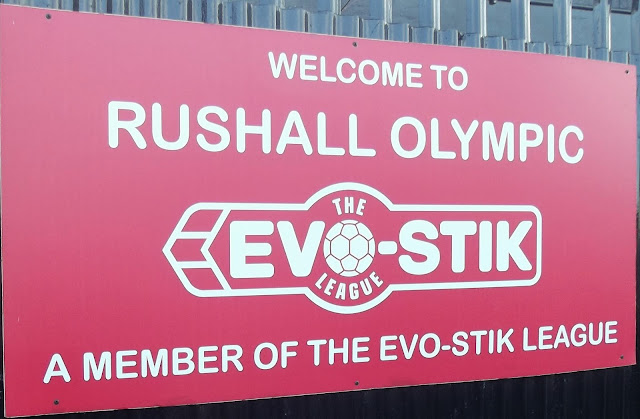 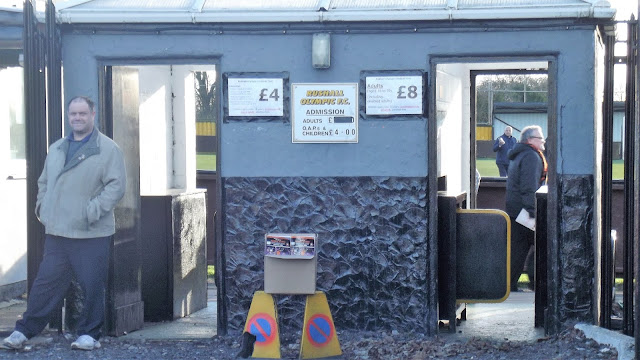 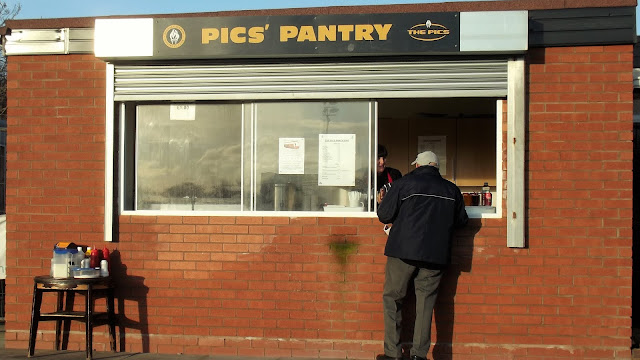 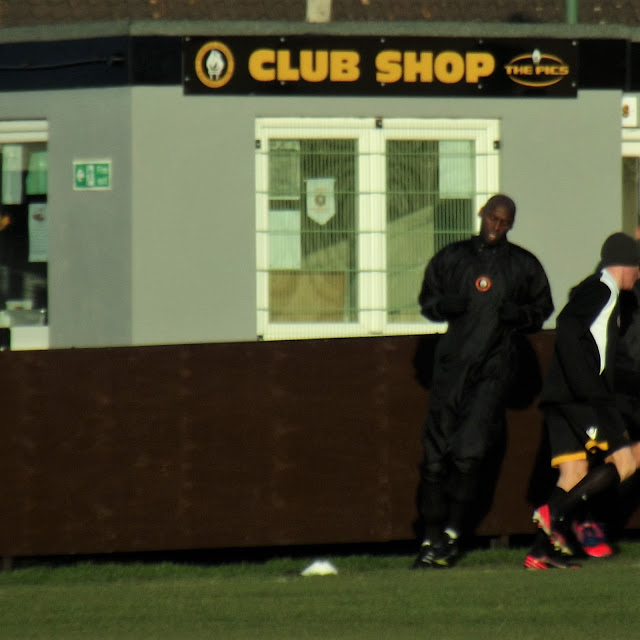 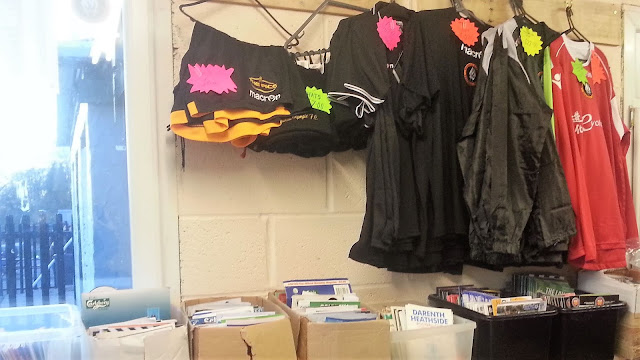 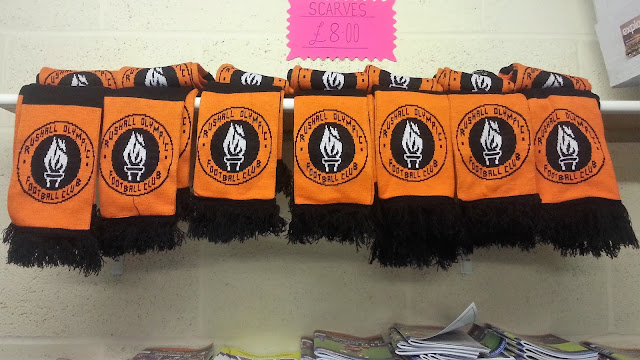 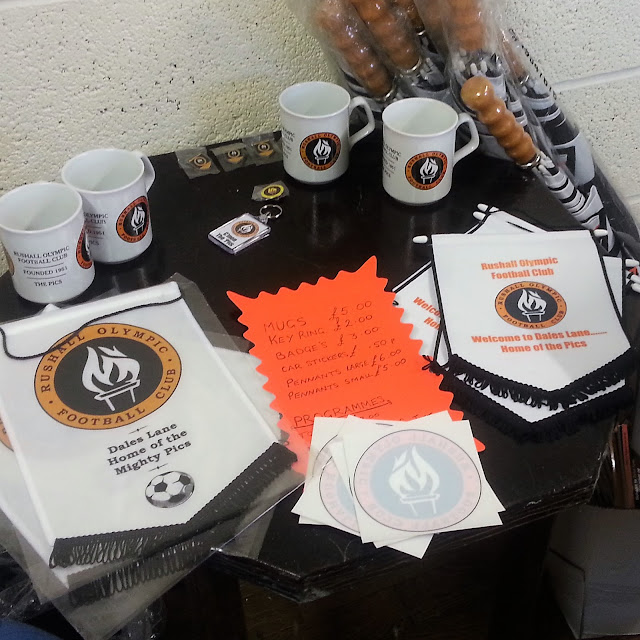 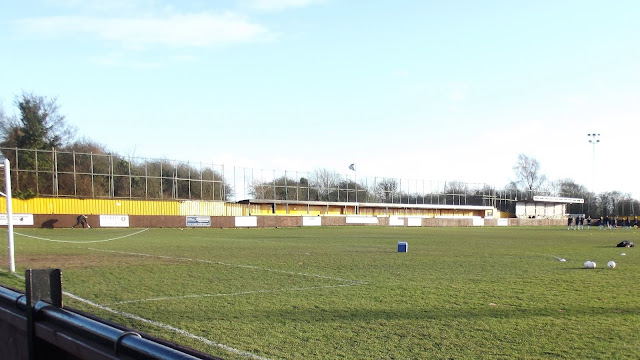 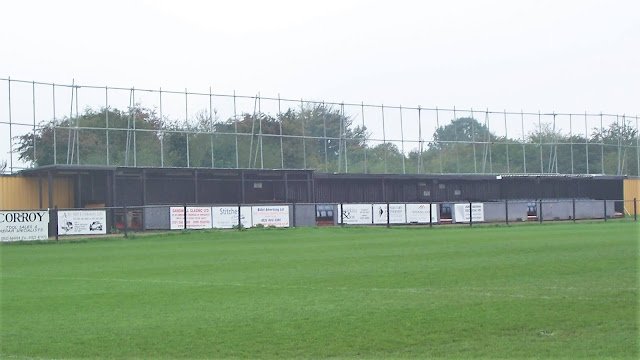 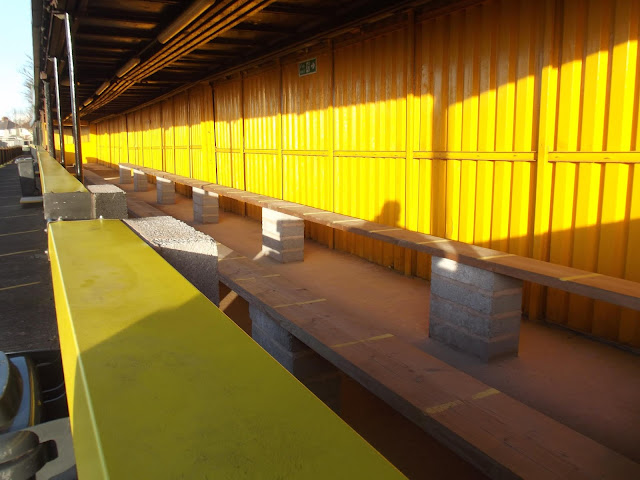 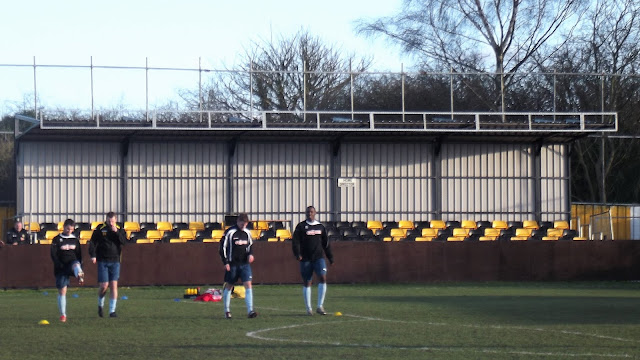 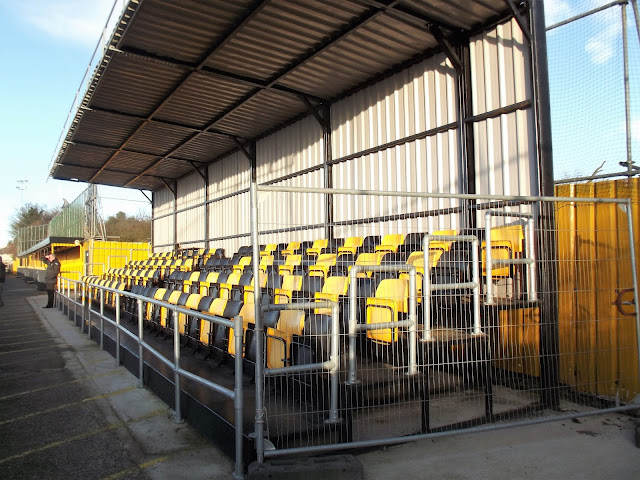 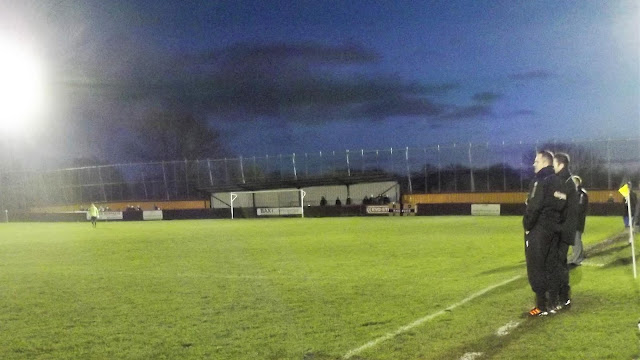 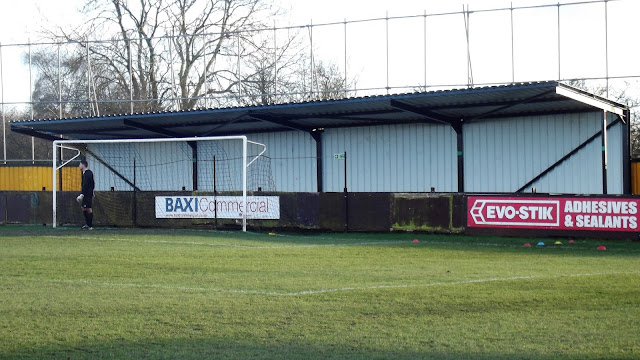 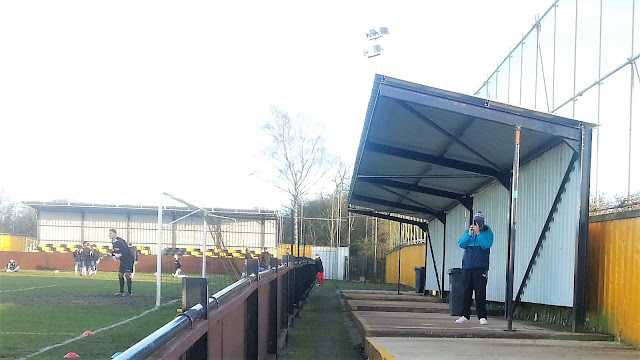 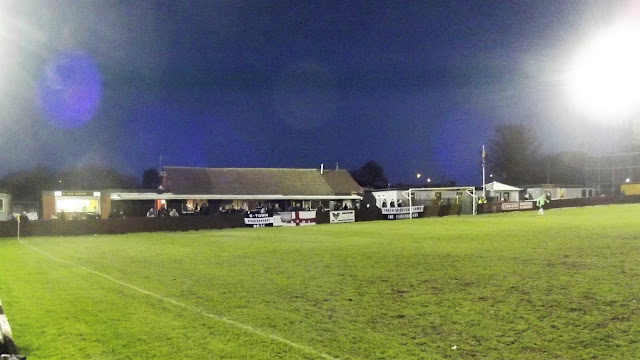 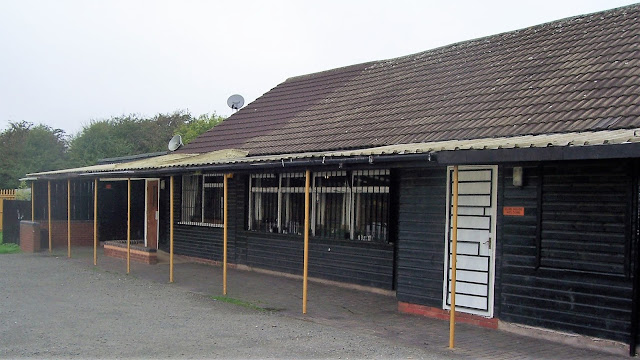 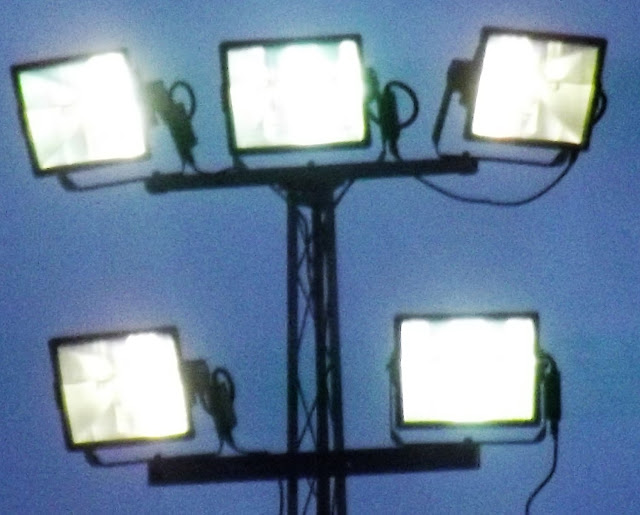