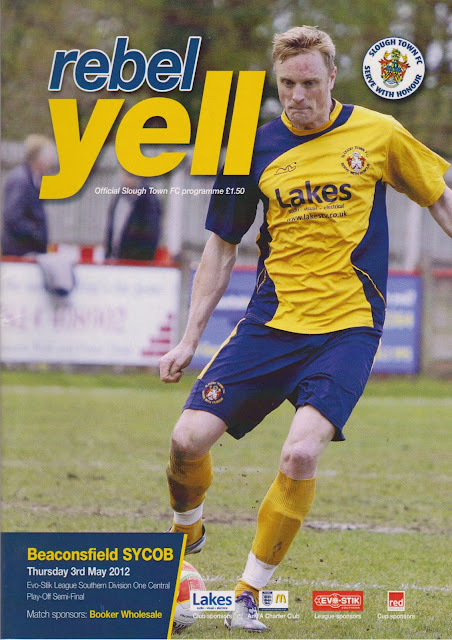 BEACONSFIELD SYCOB were established in 1994 as a result of 2 local clubs - Beaconsfield United and Slough Youth Club Old Boys merging. They took Beaconsfield United's place in the Spartan League and although results were mixed at first, they soon found their feet. The league soon merged with the South Midlands League in 1997 which saw an upturn in results. They were Champions in 2001 and 2004, the second of these occasions saw them promoted to the Southern League's second tier. After 2 mid-table finishes, they had a season to forget in 2006/07, finishing rock bottom and returning to the SSML. A third league title saw them bounce back straight away and in their first season back in 2008/09 they achieved their best finish to date, finishing 4th in the Southern League Division 1 South & West. They reached the end of season playoffs, losing out to AFC Totton in the semi-final. Since 2008/09 they have been in Division 1 Central, having 2 further unsuccessful playoff ventures in 2012 and 2013.

In the FA Cup, their best progress has been the 2nd Qualifying Round which they have reached on 7 occasions. The last time being 2014 when they lost 3-1 at home to Greenwich Borough. The FA Trophy has not been a happy hunting ground, with just one win in 11 seasons, this came in 2009 as they beat Aylesbury United 2-1. The FA Vase was a similar story, with a 2nd Round replay defeat to St Neots Town in 2003 being their best progress as they went out 6-5 on penalties. Local cup wins include the  SSML Challenge Trophy in 2002, the SSML Premier Division Cup in 2008, the Berks & Bucks Senior Trophy on 2004 and 2008, and most recently the Berks & Bucks Senior Cup in 2013. 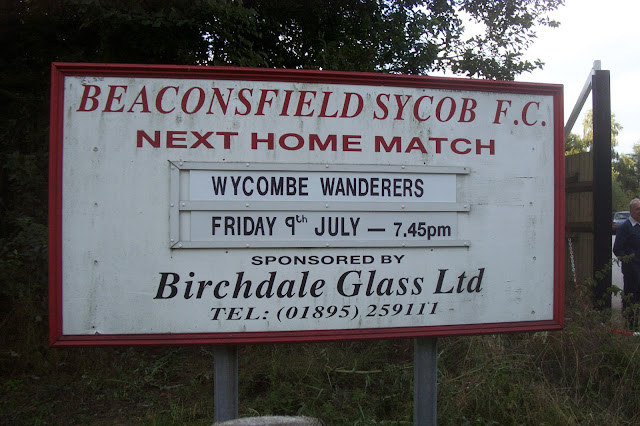 My first visit to Holloways Park was a Friday night friendly game when Wycombe were under the leadership of Tony Adams. It was a hugely experimental side that took the field for Wycombe, but nevertheless it was very disappointing to lose 2-1, thanks to an Adrian Sear brace. Wycombe replied through trialist Laurence Hall who had been released by Stoke City. He went on to have a career in non-league with Gresley, Matlock Town, Leek Town, Ilkeston and Belper Town. We signed up Clint Easton, who went on to have a good career with us. The other trialists were:

CRAIG DOBSON: After playing for Cheltenham, the winger came on trial with us and went on to have a journeyman career. The highlight of his career was 14 goals in 62 appearances for Stevenage Borough. He would return to Wycombe under Peter Taylor whilst on loan from Milton Keynes with the only time he was seen being a 2-0 FA Cup defeat at Eastwood Town where he was an unused substitute.

ALAN JULIAN: The former Brentford keeper went on to have a decent career with the highlights being 73 appearances for Gillingham. He currently plays for Bromley in the Conference.

JON FRENCH: Played for Bristol Rovers, Hull City and Barry Town before coming to us on trial. At the latter he played in their famous 3-1 win over Portuguese side FC Porto. After his failed trial with us, he dopped into non-league, playing for Weston-Super-Mare and Mangotsfield United
. 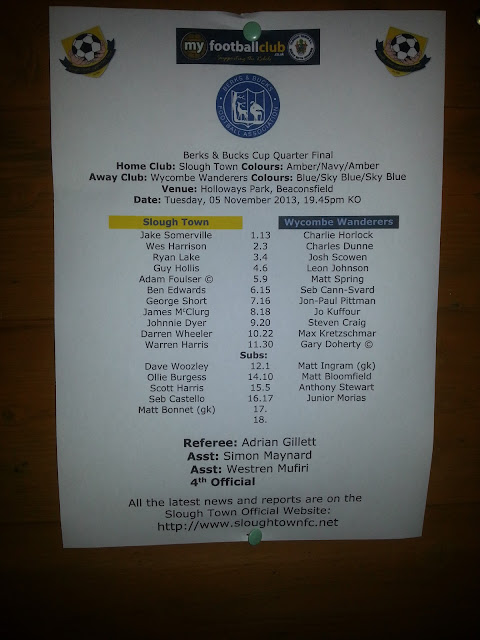 My next 3 visits were for games where Slough Town, who were tenants at the ground acted as the home team. Two were Berks & Bucks Cup games where Wycombe put out a scratch side of reserves and youngsters, having not taken the competition seriously since the 1980's. On both occasions it was not the greatest of games on the field, but there was some good natured banter between the 2 sets of fans whose teams had been serious rivals back in the early 90's. The other visit was for a tenant v landlord playoff semi-final on a Thursday night. Landlord won, but they went on to lose 3-2 to Bedworth United in the final. 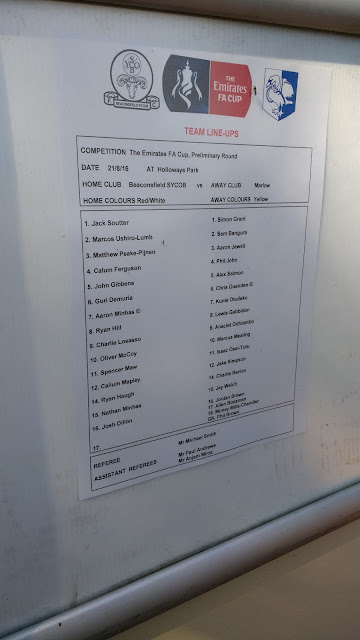 As regular readers of this blog will know,  I love the FA Cup. I am also revisiting some of the grounds I've not done for ages to update my blog. Therefore I was really pleased when the local derby between Beaconsfield SYCOB and Marlow was scheduled for the Sunday as it meant I could attend. It also meant that I could tick Wetherspoons in Beaconsfield Services before the game and enjoy a nice lunch into the bargain. 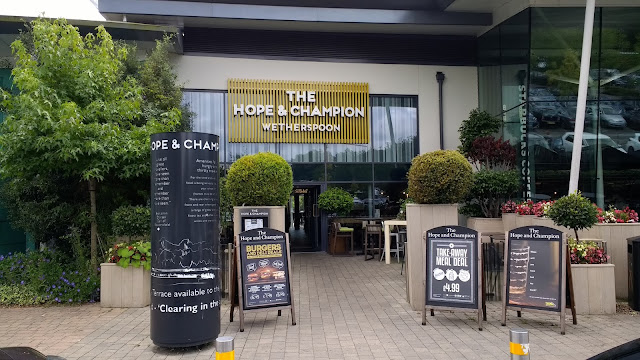 On the day of the game I was working and was happy when I was out by 11.30. I went home and had a bath before doing some research on Beaconsfield SYCOB for my blog. At 1.30 I left home,  due to delays due to roadworks at Hazlemere Crossroads I didn't get to the ground until 2. From there it was a surprisingly long 10 minute walk to the Hope and Champion Wetherspoons, which initially appeared to be across the road. Prices were a bit more than usual and they didn't do alcohol in the meal deals but even so I had a gourmet chicken burger and a pint of Thatchers Gold for just over £11. I left the pub just after 2.40 and walked back to the ground, getting back at 2.50. 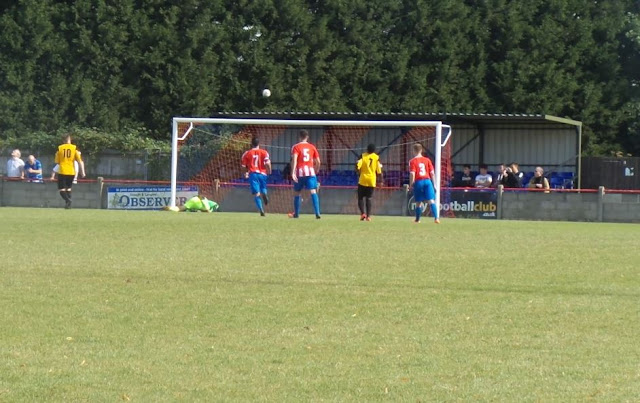 After paying £8 to get in, I discovered the programme had sold out, though I wasn't bothered as I already had one from this venue. I stood along the side for the game. The game took a while to get going, but it was visitors Marlow who took the lead on 10 minutes through Chris Ovenden who netted from around 10 yards, following a decent ball across the box. Just before half time, the hosts equalised when Oliver McCoy headed in a hanging cross. Marlow had a chance to retake the lead on 56 minutes, following a foul in the box. However the penalty was blasted well over and the chance was wasted. They very nearly got their goal straight over as the Beaconsfield keeper allowed the ball to roll through his grasp, though luckily for him it drifted wide. All these missed chances looked to have cost Marlow when the hosts went ahead. Charlie Lossaso's 30-yard free kick took a nasty bounce in front of the keeper to give them the lead, and indeed the home side had a couple of chances to make it safe. They looked to have it won until the last minute. A long throw was put in, someone hit the bar and it bounced out right to the feet of Anaclet Odihambo who stabbed home from around 6 yards.

The result was a fair one, given the balance of play, though both sides will have regrets that they didn't take their chance to win. They will now replay at Marlow in the week for the right to travel to Wantage Town in the next round. The attendance of 204 was around 3 times the usual home attendance, with a sizeable following from Marlow so it looks like having the game on Sunday did the club good, with a few groundhoppers and other local fans in attendance. I drove home cross country to avoid the roadworks, getting back around 5.15. I had dinner and spent the evening completing my blogs and watching Only Fools & Horses. 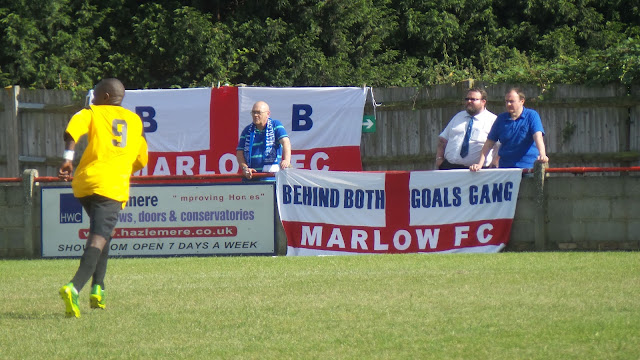 HOLLOWAYS PARK is a fairly modern ground with them moving here in 1971 due to the government needing the land that there old ground stood on to build the M40. The entrance is from behind the goal, where the clubhouse is located, this is a fairly large bar which serves a decent range of drinks including Thatchers Gold and real ale from local brewer Rebellion. For food there is a burger van which serves standard looking fare. There is a motorway services across the road, it's a lot better than most with Mexican & Indian restaurants and even a Wetherspoons pubs. You will pay a premium though, as I imagine you would in the well-to-do town which is around 15-20 minutes walk away.

The football ground itself is not a classic, it is however well kept and functional. There is a smart terrace behind one goal with a capacity of around 300. Other cover is provided in the form of seats - along the side is a fair sized stand that holds 200. In addition, on my latest visit, a new metal stand had been placed behind the far goal, adding another 100 seats. There's plenty of uncovered standing too, including a couple of bits of stepped terracing, either side of the main stand. 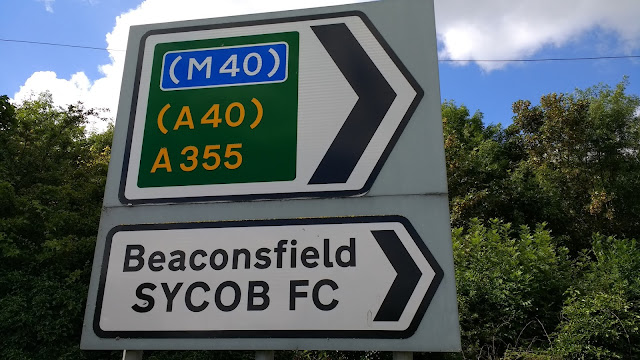 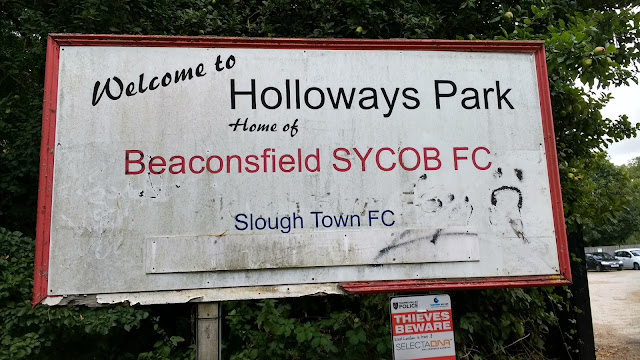 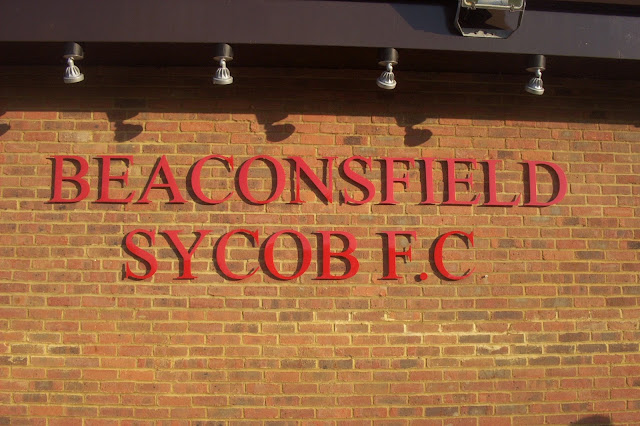 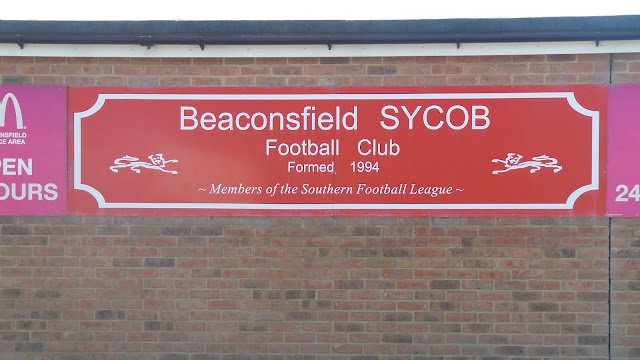 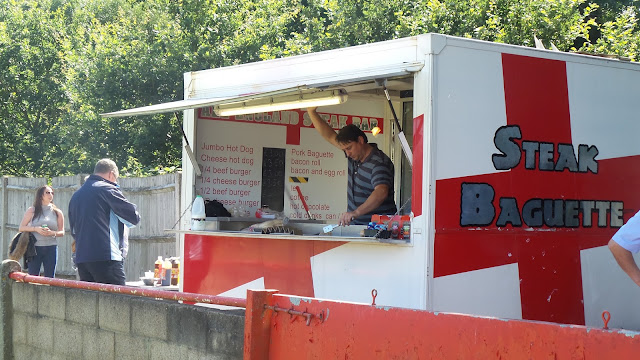 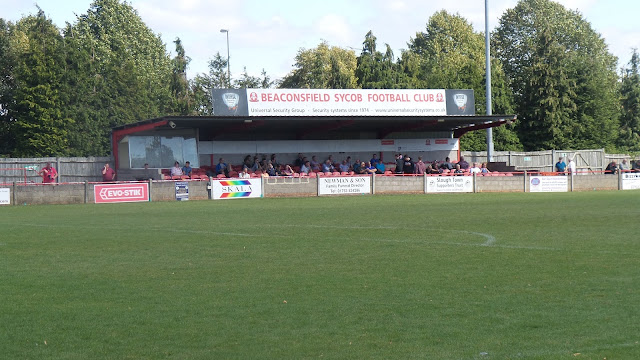 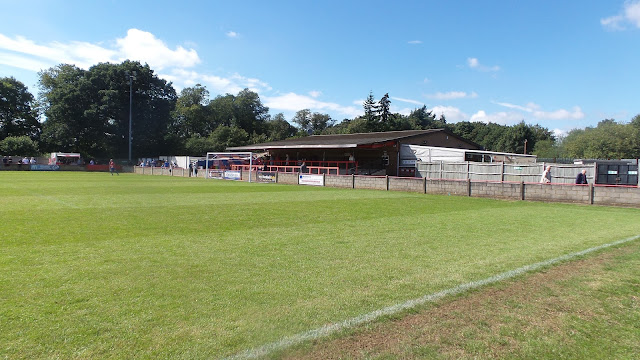 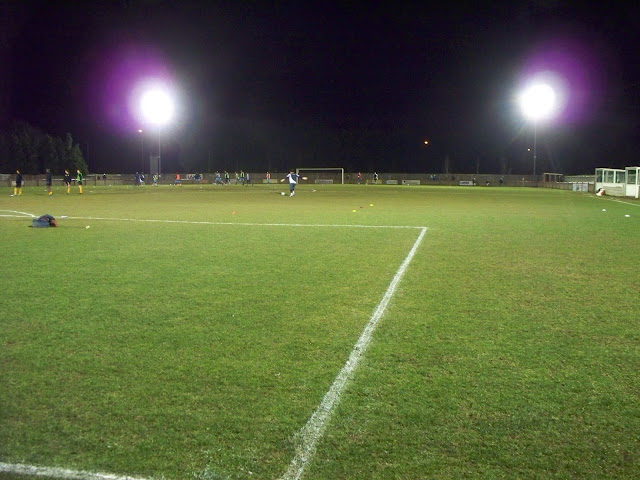 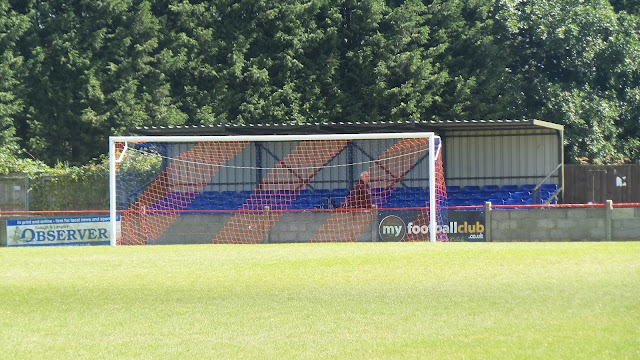 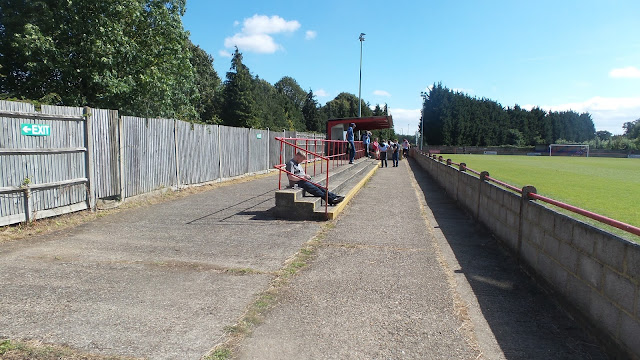 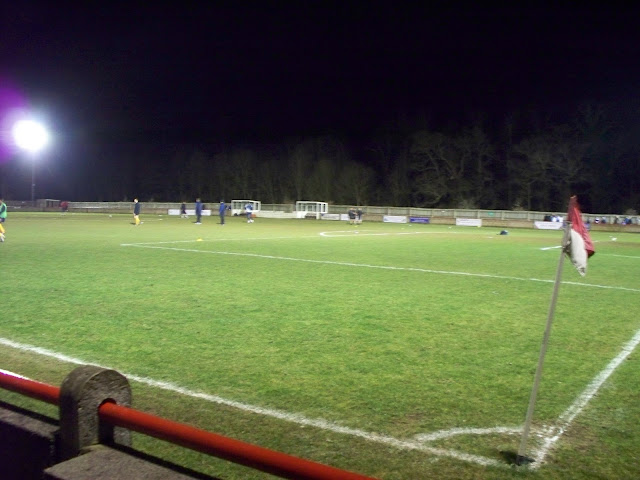