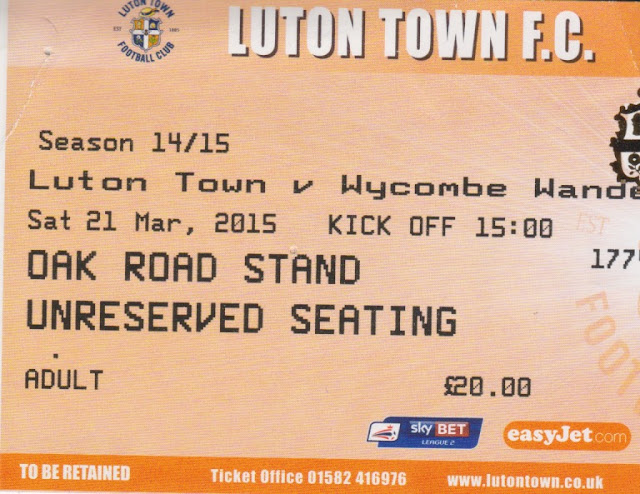 Luton Town were formed in 1885. They have had several spells in the English top flight, perhaps the most iconic was in the 1982-83 season when Raddy Antic's goal on the last day of the season was enough to keep them up and send City down which prompted manager David Pleat to jig across the pitch in pure delight. In terms of best ever placing that came in the 1986-87 season when they finished an incredible 7th best team in the country which is unthinkable in the modern game. On the flipside the period of 2006-2009 was disastrous, 3 successive relegations from the Championship to the Conference, this massive fall from grace was not helped by 10 & 30 point deductions for financial reasons in the last 2 seasons. It took them 5 seasons to get back with them returning last season and almost making the playoffs after an 8th placed finish.

In the FA Cup the club were runners up to Nottingham Forest in 1959 when they lost 2-1 in the final at Wembley Stadium. Perhaps the clubs finest honour came in 1988 when they lifted the League Cup at Wembley after beating Arsenal 3-2 in the final. They nearly made it 2 wins in a row the following year, but as in 1959 they just couldn't beat Forest. The Football League Trophy was on in 2009 after a 3-2 victory over Scunthorpe United. Other honours include 2 FA Trophy Semi Finals during their non league wilderness years and a Full Members Cup Final appearance in 1988.

The club were also famous for a huge riot at their ground in 1985 in a game against Millwall were extensive damage was caused to the ground and surrounding. It turned out that hooligans had came from lots of other clubs for one big carve up and as a result Luton Town banned away supporters for nearly 5 seasons. An extremely heavy handed and draconian approach, but not as much so as home fans who had to carry ID cards to buy tickets for their games. The initiative was nearly rolled out nationally by the hapless Tory government of the day but thankfully supporters groups intervened and the ludicrous idea was scrapped, never to see the light of day again.The club also had an artificial surface from 1985-1991, a period which saw much success for the side. 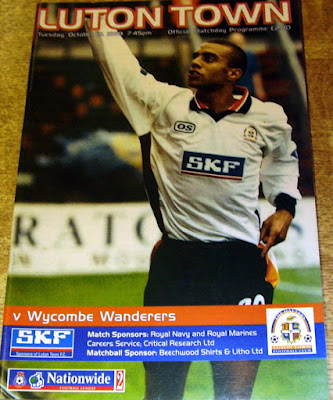 My first visit was in 1999 when my Dad's mate Dave gave us a lift along with my brother. The resulting game was drawn 1-1 with Jason Cousins scoring the opener for Wycombe before Stuart Douglas equalised for Luton. My biggest memory of that game was Julian Watts playing for Luton and they must have chosen their squad numbers with a touch of humour as his shirt read '40 WATTS' earning him the nickname of 'lightbulb' 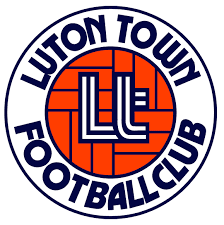 VISIT 2: LUTON 1-0 WYCOMBE (D2 25/01/03)
VISIT 3: LUTON 3-1 WYCOMBE (D2 11/10/03)
These 2 visits came during the time when I was watching every game home and away and yielded a win and a defeat. The first season was a disappointing low placed finish while the second came during a woeful relegation season so it was no surprise that both games ended in defeat for the Wanderers. 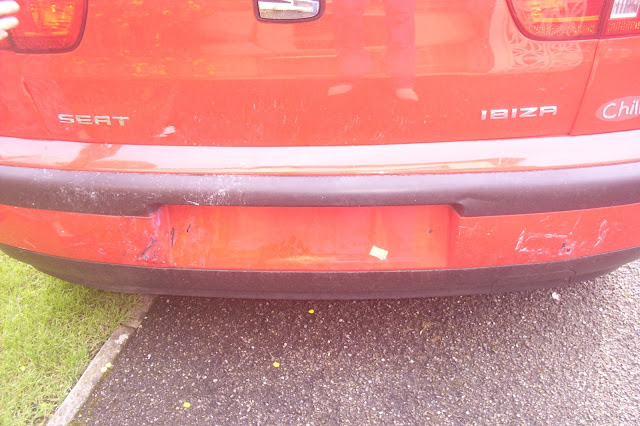 As I was on a week off from work I travelled to Luton for a reserves game, sitting in the main stand. A young Wycombe side drew 1-1 with the Hatters and included trialist keeper Ashlee Jones in goal. The game was most notable however for a bus smashing into the back of my car on the way home, but luckily it was OK to drive and the insurance sorted the repair. 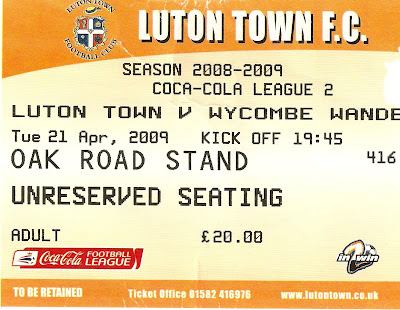 I went on the supporters coach for this one. This was the season where Luton were harshly docked 30 points for financial irregularities. As a result by the time we visited in late April they were already relegated. Their league placing therefore was a pretty false one and it was a tough away game for us.John Akinde's goal gave us the win we needed as we edged towards promotion to League 1 in unconvincing fashion under Peter Taylor. 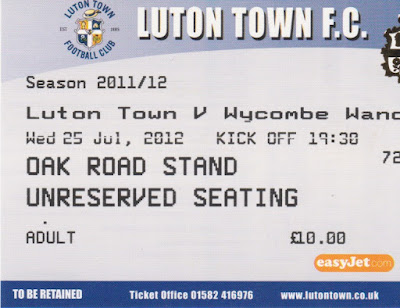 The dullest of my visits was for a pre season friendly under Gary Waddock with Luton stuck in the Conference. I drove to this one with my mate Paul and we watched a dull 0-0 draw. The highlight of the day was the pre match samosa and chips after I bottled having sheeps brain off of the menu. 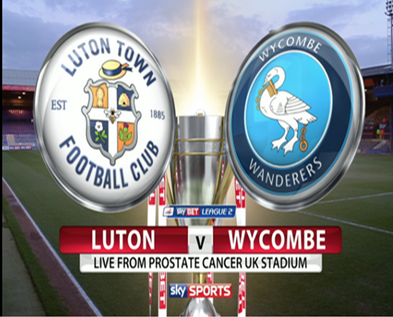 This visit was probably my most enjoyable one as it was the best game. Unusually for my week off I was not up north on one of my football jaunts but my mates Anwar & Lewis offered to get my ticket between them if I drove. As it would cost me less than a tenner in petrol I went for it as I'd not been to an away game for a while and I was pretty tired from a groundhop up in Scotland over the previous weekend.

The journey over there went nice and smoothly and we were there shortly after 6. Pre match dinner was a very nice Chicken Vindaloo from a local restaurant for only £6 for a nice sit down meal. The game itself was a cracker and live on Sky as well. In Wycombe's 1000th League game they took the lead on 3 minutes through a deflected Sam Saunders shot though Elliott Lee soon equalised for the Hatters. Paul Hayes out us back ahead from a penalty before central defender Alfie Mawson gave us the lead with a cracking goal. Lee pulled one back for Luton but Wycombe held on for an important win that cemented our place in the automatic promotion spots. The only sour note was a Wycombe supporter, Lana, hurting herself in the stupidly close together rows of seats but after a bit of first aid she was back cheering her team onto a deserved win. 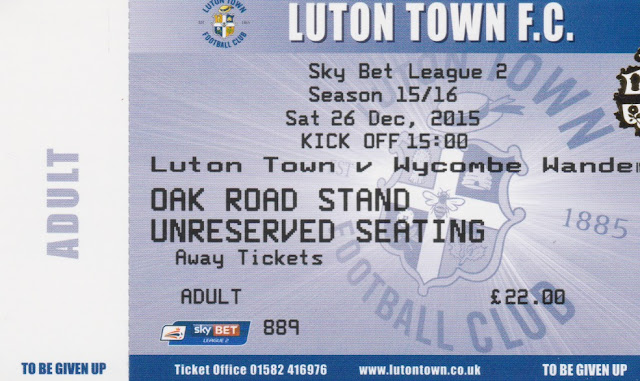 Normally I'd be loathe to visit a ground I don't especially enjoy going to so soon after my last visit, but this one kinda made sense. I was going to be having a pretty heavy day on the sauce and a ground with not much chance of a drink around it made sense for my liver. The original plan was to do the same as last year with Anwar & Lewis but in the end my parents offered to pay for the trip, lock stock and barrel (or to be more precise ticket, meal and coach) for a Christmas present and so I took that option. It would mean a pub stop, but sod it, I'll just have to leave my detox a little longer.

After finishing work at lunchtime on the 23rd I was looking forward to a few days off. A decent Christmas was had with the family, though it wasn’t the healthiest with me drinking and eating plenty of stuff that isn’t good for me. Even though I had a few drinks though, I didn’t suffer any ill effects and woke up bright and early at 6am on Boxing Day, neatly 5 hours before I needed to get the coach. I killed time by watching the blu-ray I’d got for Christmas - I Believe in Miracles - the story of how Brian Clough lead Nottingham Forest to European glory. It was very good and is well worth a watch, even though I wasn’t around at the time, neither do I support Forest. After I’d had a shower and got dressed I sat listening to the Grassroots Football Show podcast from East London Radio, while making plans for Hythe Town v Folkestone Invite, which will hopefully be my game tomorrow.

Before I'd left to get the coach I'd seen numerous games being called off in the North and glad I'd not planned anything up there. I got the coach from the end of my road at 10.45 and soon we were on our way. By 12 were were at the Spotted Dog in Flamstead, the Independent Supporters Club choice of pre match venue. The people were nice and friendly towards dogs and humans and there were plenty of people with their canine companions there. Sadly the drink and food was not so good for me with only Stowford Press cider and a limited choice of small portions of food that was pretty average at best. After 3 pints I was still hungry so when I got to the ground I went in the local takeaway and got myself a Lamb Burger meal with chips and drink, less than a quarter of what my Omelette cost on it's own. 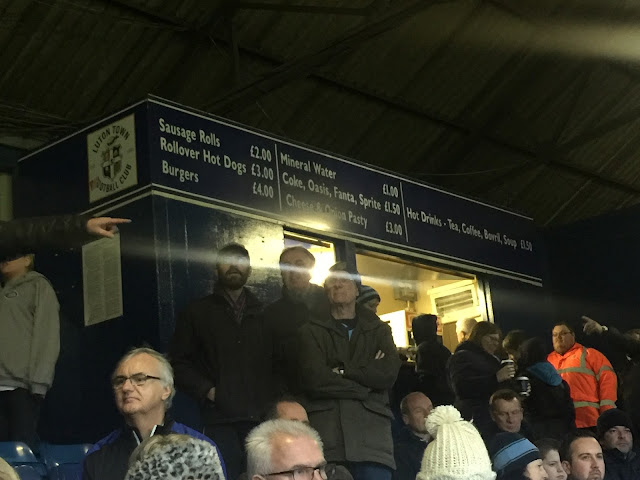 My brother did something similar and as it was nearing kick off, we decided to take it back and eat it in the ground. The game itself started fairly sedately with lots of neat play, but little end product. Most of what was created was from Wycombe and we looked firmly in control. Half time and it was still goal less but in the second period Wycombe started to make inroads into the Luton defence. It didn't take us long to go 2-0 up through veteran strikers Garry Thompson and Paul Hayes and this forced Luton to gamble on a triple substitution. They bought on a couple of decent players in Jack Marriott and Luke Gutteridge in a bid to swing the game their way. The linesman falling over led to Jim being treated and lots of injury time being played, but in all that time the hosts couldn't even muster a shot of note.

It has been a decent day with the family, and most important of all a gratis one considering I'll be on my own for at least my next hop. The coach made reasonable time home after some drop offs and I was back home by 6.40. I spent the evening relaxing and listening to that days 3 Counties Sport on the BBC 'Listen Again' facility. Amazingly before the game Wycombe had the worst record in the Football League on Boxing Day. Just 4 wins in 20 up until today, so today's victory was most welcome, even if only to balance the books. 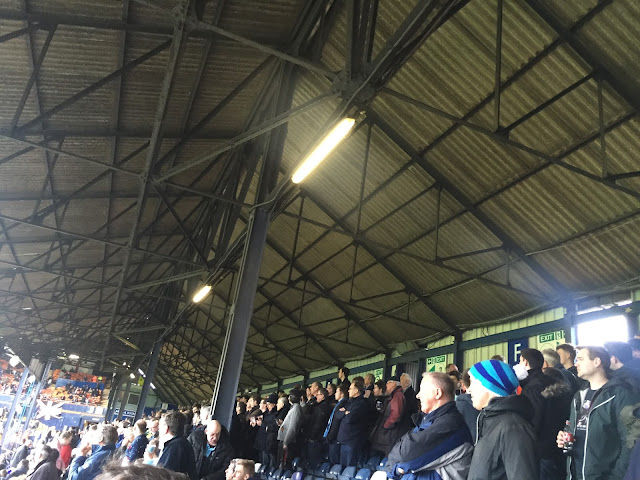 KENNILWORTH ROAD is great to look at with some really nice retro touches, and it's especially decent under floodlights. However actually sitting in it is dreadful with the legroom poor, especially in the away end and even standing you are hemmed in in conditions that would probably be barely legal for cattle let alone humans. The facilities for food are pretty crap within the ground and the club shop is pricey. You'll have to walk into town if you want a decent drink as well as it's in the middle of an Asian community. However this last point does have it's advantages as there are plenty of excellently priced restaurants serving nice curries and the like. I can especially recommend Al Bilal for a pre match meal. 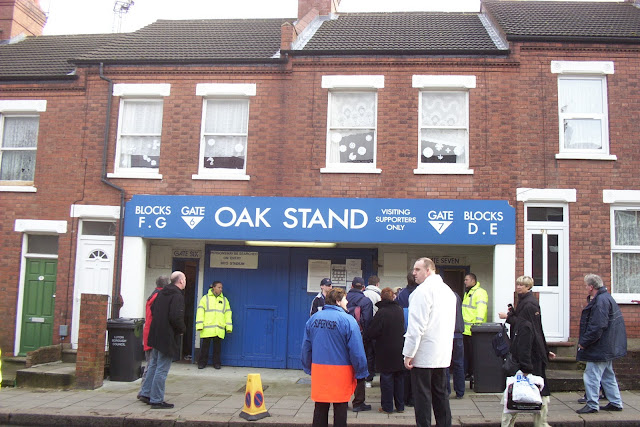 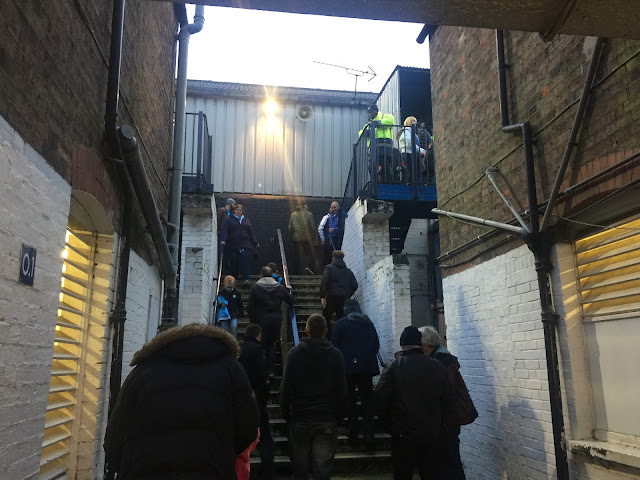 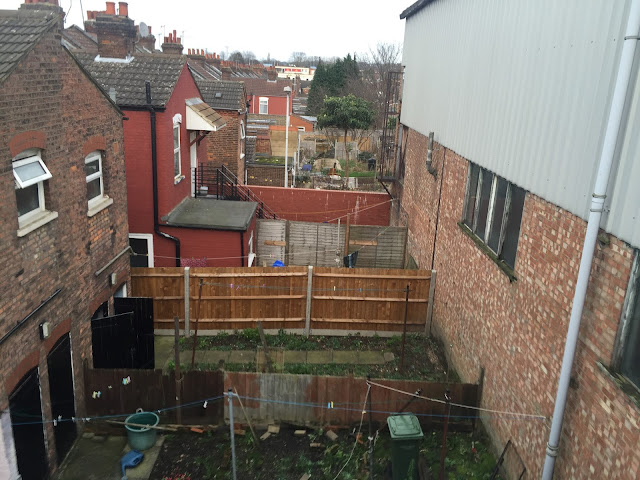 THE OAK ROAD STAND is the designated 'away end' and originally away fans got the lot. However as of this season it has been split and shared with Luton fans for a lot of games with the away fans getting 1100 seats. As mentioned before leg room is poor but the low roof means you can get a great atmosphere going. Entry to the ground is very strange as the turnstiles are where someones living room should be and as you walk through you can see all their washing hanging up in the back garden! 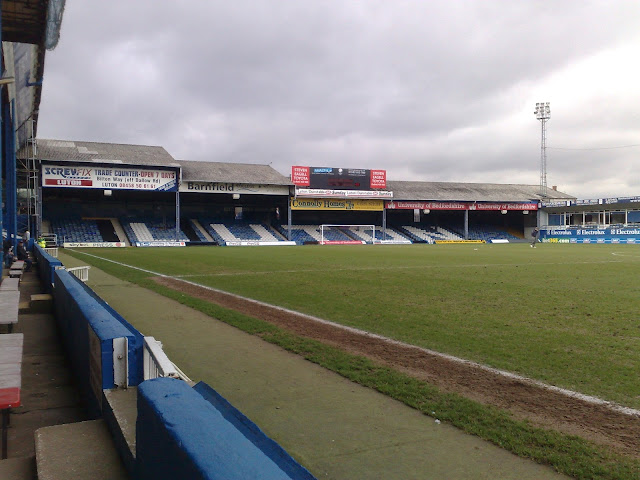 THE KENILWORTH ROAD STAND is the biggest of all the stands and housed the bulk of the home sides vocal support, at least until the away end was shared with home fans 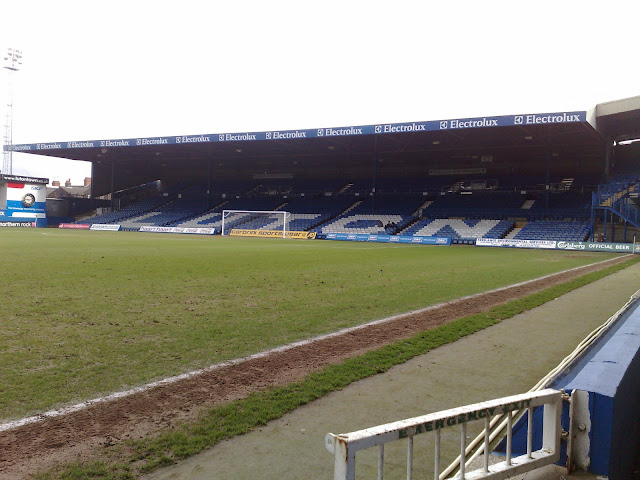 The far side houses both the MAIN STAND which was is around the same height as the away end and the imaginatively titled NEW STAND make up the side to the right of the away end and I sat in here for a reserves game once. The legroom here is just as bad as the away end, at least in the main stand. The fourth side has a row of executive boxes but it did originally have a seated stand that Millwall fans wrecked in a riot in 1985. 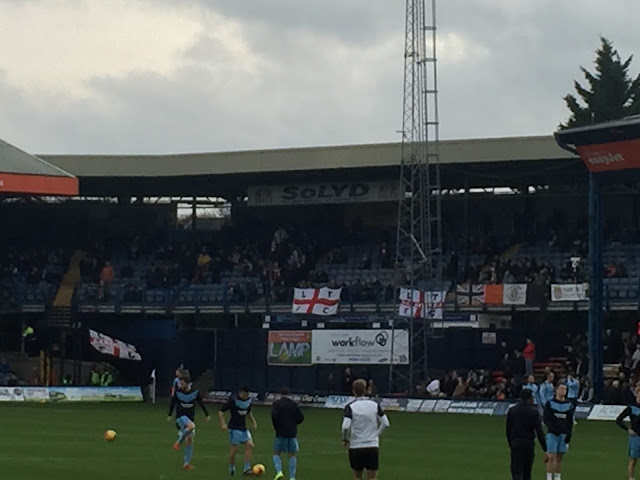 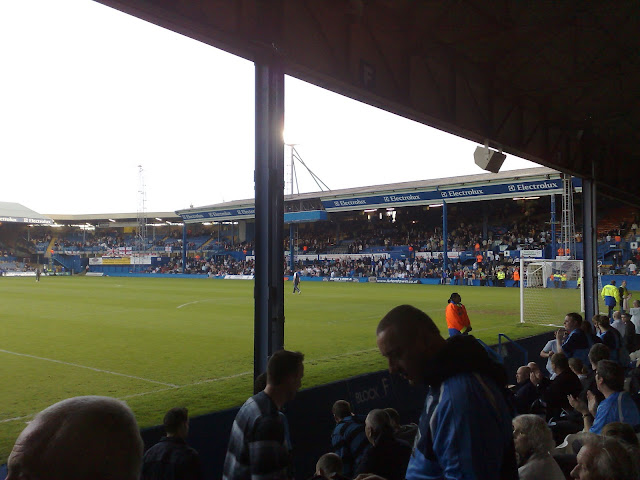 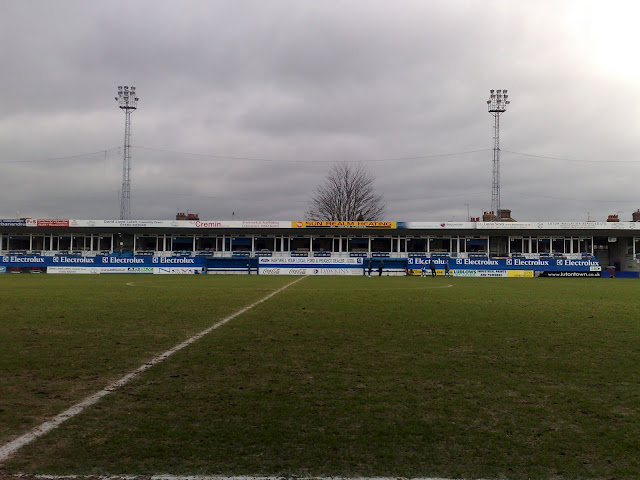